BCC is the Beijing Climate Center from Beijing, China. BCC organizes and coordinates research efforts on regional climate, operational predictions and climate application and services. It also provides climate services to China and other Asian countries for disaster prevention and mitigation.

BCC as a climate center, also runs their own long range modelling system, called BCCCSM_1.1m. It is the second generation climate modelling prediction system from BCC.

Unlike the Euro-USA modelling systems, we see a different story with this forecast system. We have a deep broad low, but not in the North Atlantic. Instead we have the main low core over east Canada, and one over eastern Europe. This is not the classical positive NAO pattern that you can see on the other long range forecasts. Such pattern would promote northerly flow across western USA, and north/northeast flow over Scandinavia down into central Europe, on the edge of that east European low. 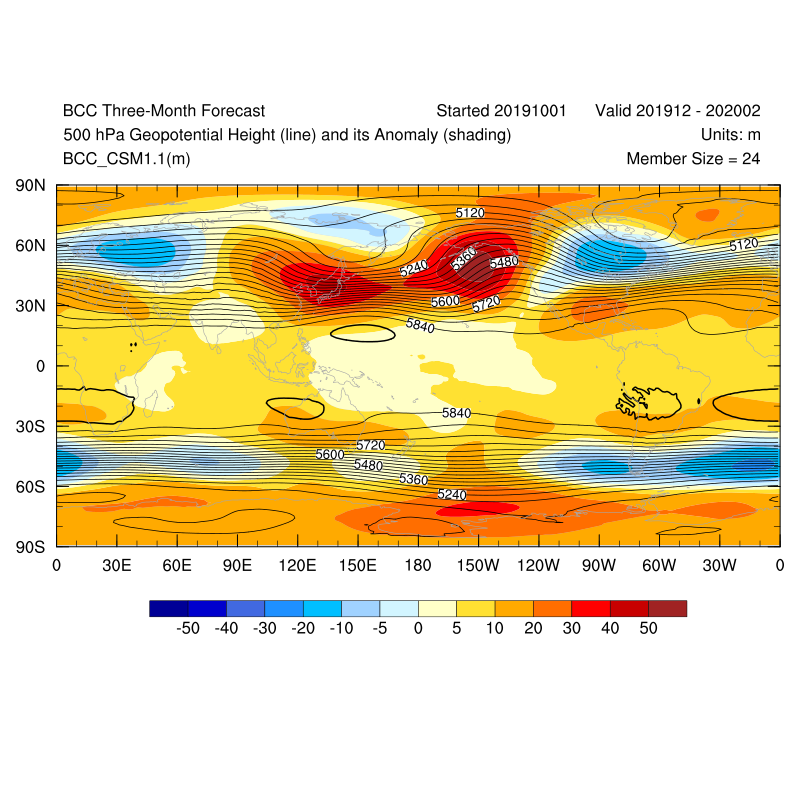 Staying at altitude, we have the 850mb temperature forecast, which is on average around 1.500 m altitude in the mid-latitudes. Here, we can see what we expected from the 500mb height forecast in the USA, colder air coming down from Canada into USA over western parts. But we see no hints at any colder anomalies over Europe. 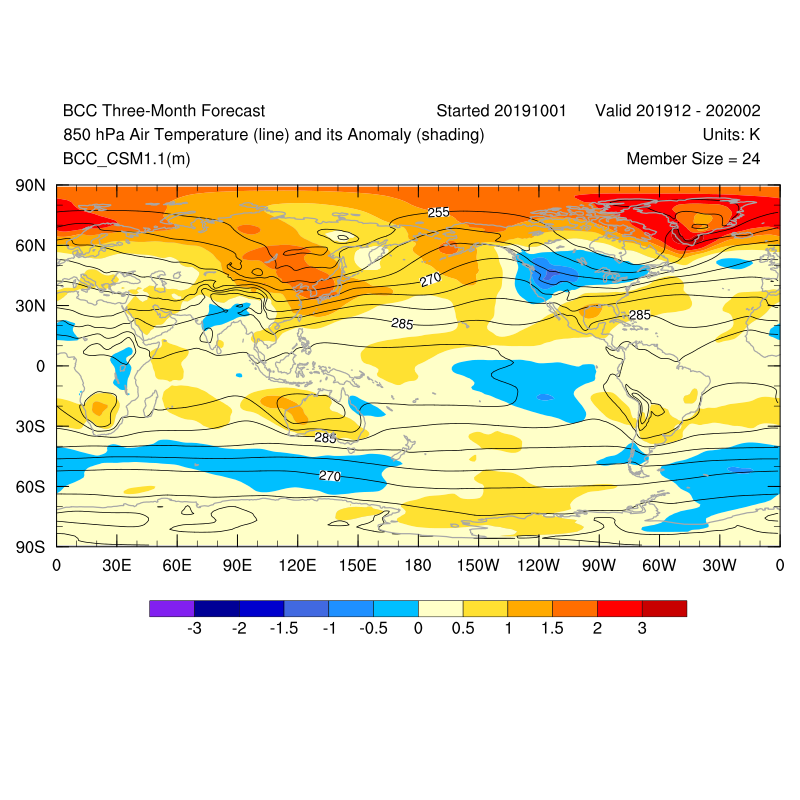 One of the most used long range parameters is of course the 2-meter temperature anomaly forecast, also simply referred to as the surface temperature forecast. It is the main forecast to tell us what to expect in terms of temperatures (warmer/colder). We can see the colder forecast for west/northwest USA, as emphasized from the pressure forecasts above. But we have no colder air anomalies over Europe, which should be present over Scandinavia and parts of east/central Europe. We see the whole polar circle is under above average temperatures, which does not completely agree with the pressure forecasts above. 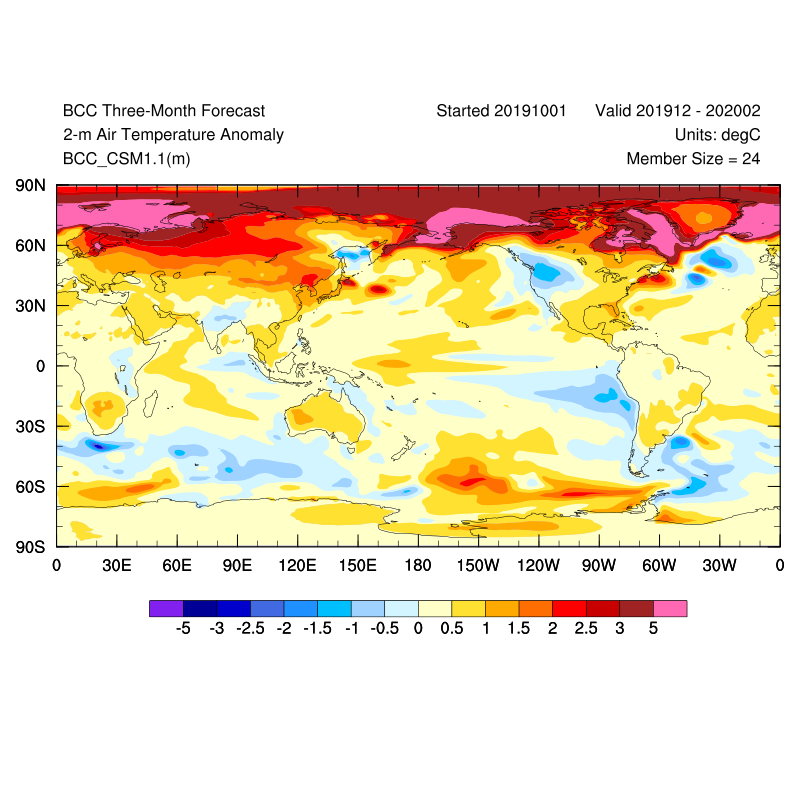 Looking at the precipitation forecast, we have wetter than normal over UK and northern/eastern Europe, and drier than normal across southwest and southern Europe. In the USA we see wetter conditions over southern and central parts, as a result of the low pressure over central parts. 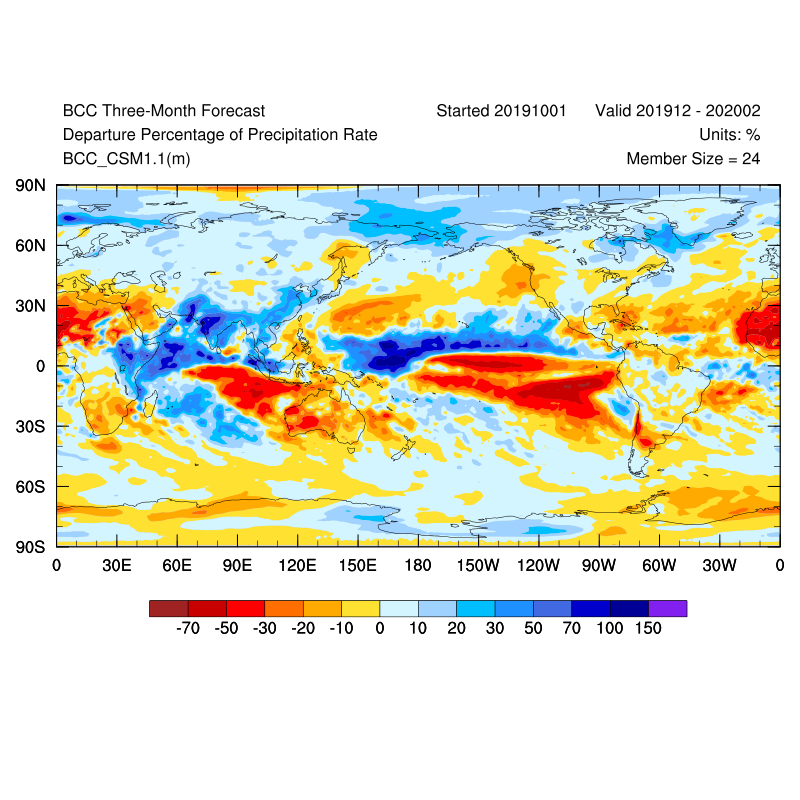 To summarize, the BCC forecast from October shows a different forecast than other main global long range systems. It has more winter emphasis in the west/northwest USA, and hints at possible winter conditions in parts of east/central Europe form the pressure forecasts, but not from the temperature forecast.