An intense winter storm is rapidly developing over southern Canada, forecast to move into the Midwest of the United States and reach the Southeast states by Friday. Severe wind event will spread across the Northern and High Plains tonight into Thursday, followed by an Arctic cold blast towards Florida and the East Coast by the coming weekend.

Yet another winter storm event is setting up over the Upper Midwest on Thursday and Friday, associated with a strengthening upper trough emerging from southern Canada. A High Wind Warnings have been issued over Montana and portions of the Northern and Central Plains of the United States. Severe damaging winds are likely to develop across a broad swath along and especially behind the moving cold front rapidly spreading south-southeast through Wednesday night. 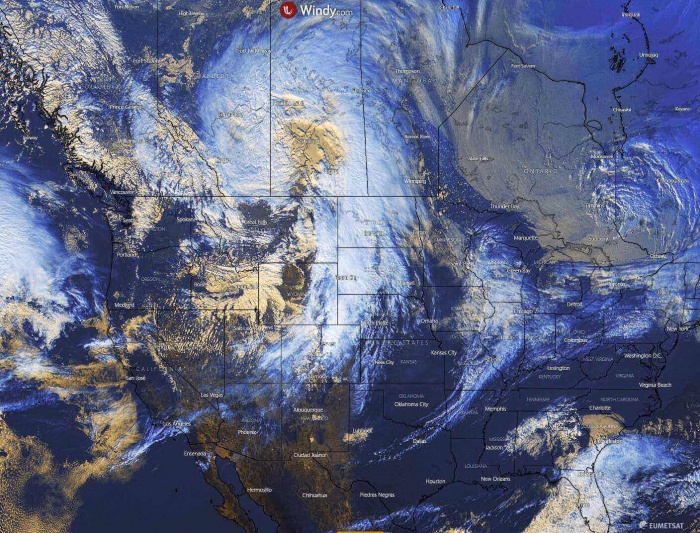 On the west side of the storm, the pressure gradient will be strong, as the surface high-pressure system builds up over the Northern Intermountain Region under the upper-level ridging over the West Coast. A very strong surface pressure gradient is expected across most of the Plains between a strong surface-high in the Great Basin and a low-pressure area traversing Southern Canada. This is expected to result in widespread windy conditions across most of the Plains and High Plains. Locally extremely severe winds gusting above 70-80 mph are expected.

The National Weather Service (NWS) has issued High Wind Warnings over parts of the Northern High Plains and the Northern/Central Plains through Friday. 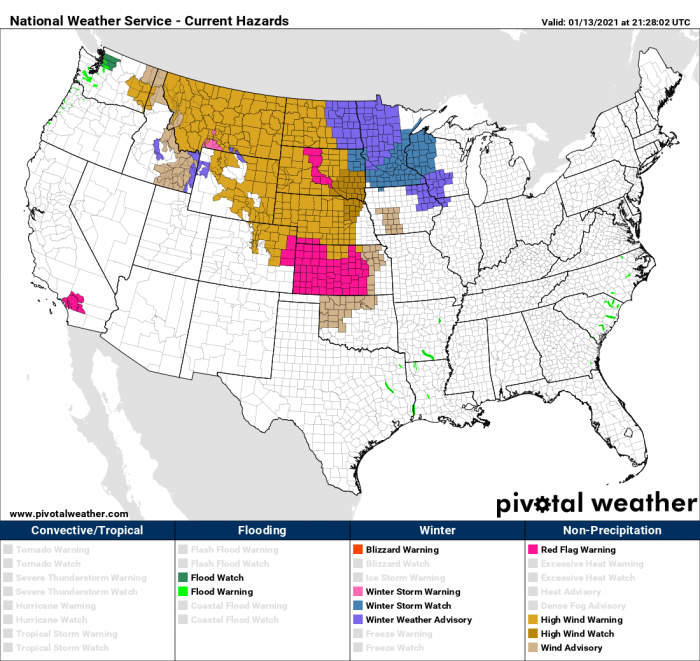 Overnight Thursday, the front with rain will extend into the Tennessee Valley. The snow will continue over the Midwest on Friday with some parts of the Midwest seeing 10-12 inches of snow locally, also over the Upper Mississippi Valley. By Friday evening, rain and snow will move into parts of the Northeast United States while the core of the winter storm will continue into the Southeast United States, significantly deepening.

A developing winter storm will bring a considerable amount of snow over the Upper Midwest on Thursday and into Friday. Both rain and snow will develop over parts of the Northern Plains overnight Wednesday. The snow will then move into parts of the Upper and Middle Mississippi Valley tomorrow (Thursday), with rain and snow moving into the Great Lakes and Ohio Valley by Thursday evening.

There will be a few pockets of rain or even freezing rain over parts of the Upper Midwest on Thursday, local ice storm potential could develop.

A well-defined winter storm will locally bring heavy snow and with a combination of severe winds, produce blizzards and hazardous driving conditions. Travels will be disrupted in places.

An impressive system has emerged over the Saskatchewan region, southern Canada this Wednesday with quite deep central pressure. It is strengthening the pressure gradient on its western edge, against the strong upper High over the western Contiguous United States. The system is associated with the fast-moving short-wave trough, moving southeast over southern Saskatchewan this Wednesday. Its surface central pressure has deepened to around 980 mbar and nearing its peak tonight. 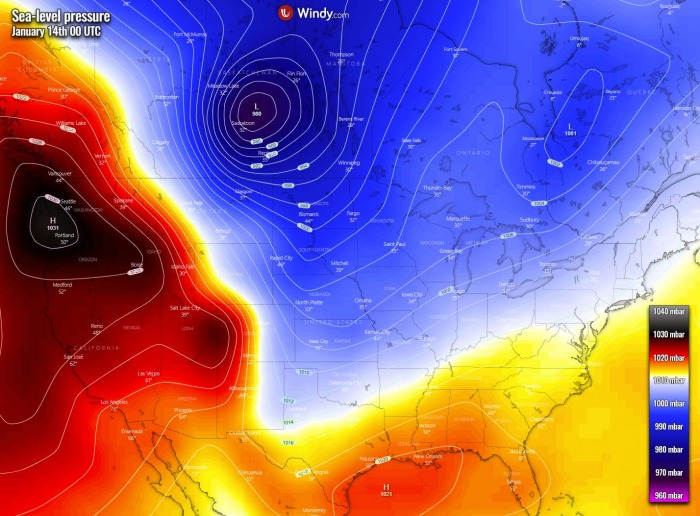 Attached below is Wednesday’s afternoon satellite image of this developing winter storm, scanned by the water vapor satellite channel. We can see a classic cyclonic structure of the deepening low, with a pronounced frontal system extending into the High Plains of the United States. The associated cold front extending from the central Saskatchewan across the High Plains of the United States curving towards the southern Rockies is well established, moving east. 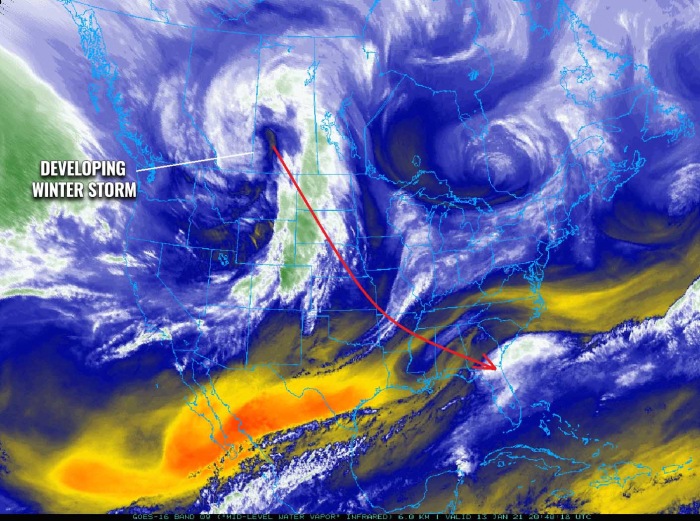 As the winter storm system strengthens tonight, the tightening pressure gradient along the Northern High Plains is speeding up the wind field. Also seen by the above satellite scan, with clearing (drying) air due to downslope mixing winds over Montana. Therefore dangerous severe wind events are underway and are gradually spreading into the Northern Plains. Violent 70-80 mph winds have already been reported from Montana and Wyoming, with peak mountains reporting more than 100 mph gusts.

Damaging winds are likely to develop locally, especially where channeling flow will develop over the mountainous terrain, Local power outages can be expected, as well as the extremely dangerous high-wind event across for the highway transportation. 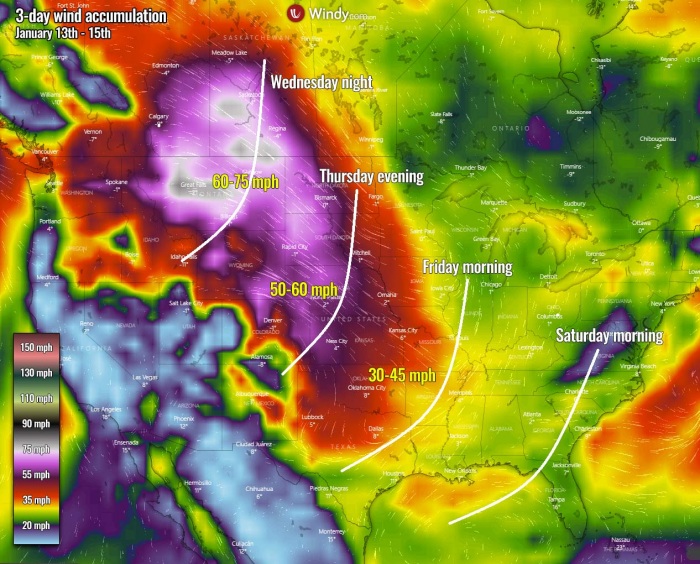 Additional severe winds are also expected further south and southeast across the Great Plains and portions of the Midwest from Thursday afternoon into Friday morning, with locally 50-60 mph possible. The approximate arrival of the leading edge of the strongest winds is marked on the image above. Combined with heavy snow at times, it will result in blizzard conditions and severe blowing snow. 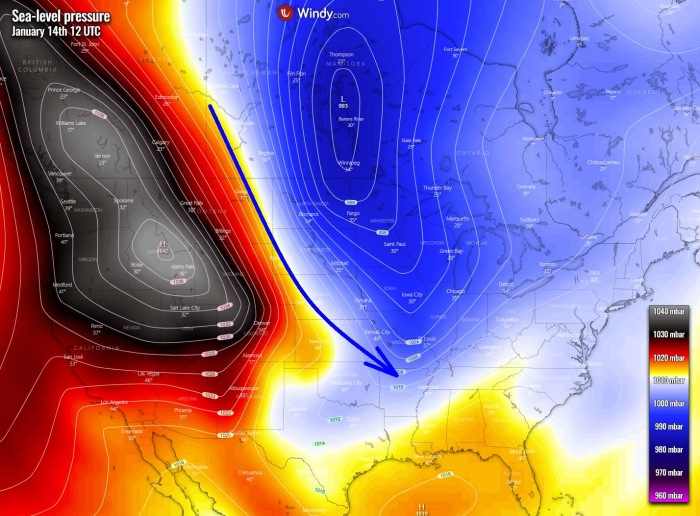 The strongest winds will gradually vanish on Friday when the pressure gradient weakens further towards the Mississippi Valley. Although the temperature will not be particularly cold, severe winds will help the real temperature feel rather low. Only slightly below normal temperatures will spread with these winds down south across th Great Plains on Thursday.

The arrival of the colder air mass blowing over the waters of the Great Lakes by Saturday will also introduce lake-effect snow. However, the position of the low and winds will not be particularly favorable for the greatest snow, but some decent accumulations could still occur along the east-southeast shores of the Erie and Ontario lakes. Further east, the leading cold front will bring heavy rainfall and potentially also local flooding across the Upper Mid-Atlantic coast and possibly also along the coast of New England by late Saturday. 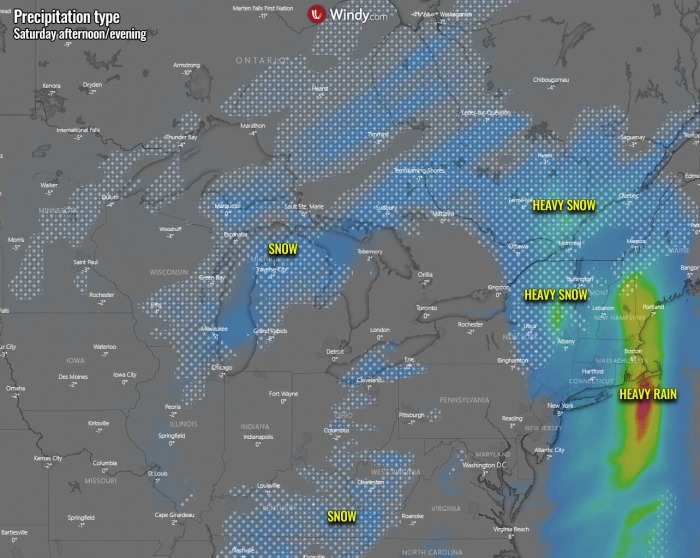 The greatest snowfall is likely across parts of Minnesota, Iowa into Wisconsin, with locally 8-12 inches of snow possible over the next three days. 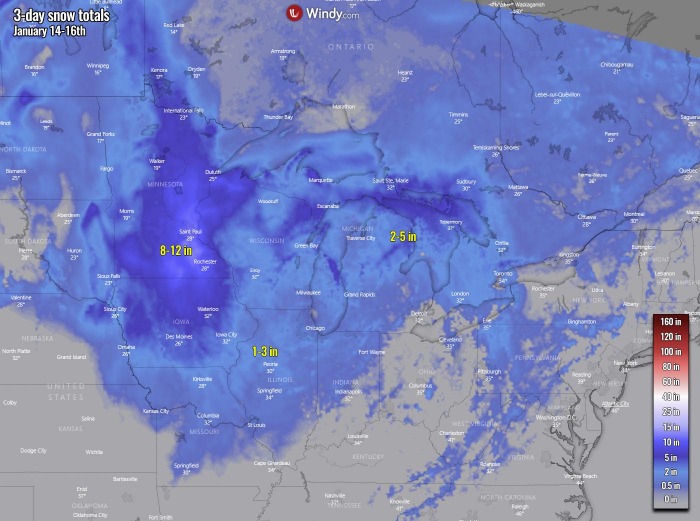 While the frontal system is spreading the winter storm and snow across the Midwest and Great Lakes on Friday, the parent upper core will be strengthening. A rather impressive deepening of the upper-level low can be seen on the attached 500 mbar chart below, centered over the western portions of the Midwest by early Friday. Notice how the low is literally trapped in-between the two upper Highs to its east and west, so it has a clear way for further movement towards the Southeast United States and the East Coast. 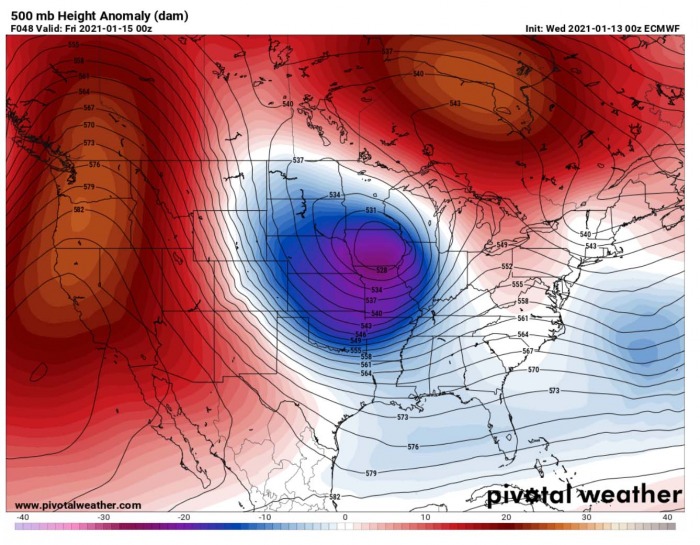 The associated surface low becomes very large, basically creating a dipole pattern across the Contiguous United States on Friday. An impressive side-by-side large scale features can be seen below, with deep low 990s surface pressure sitting over the Midwest. While a large surface high-pressure system is established across the western United States, extending into southern Canada. There will be almost 50 mbar pressure difference between the two, with textbook meridional northerly flow established. 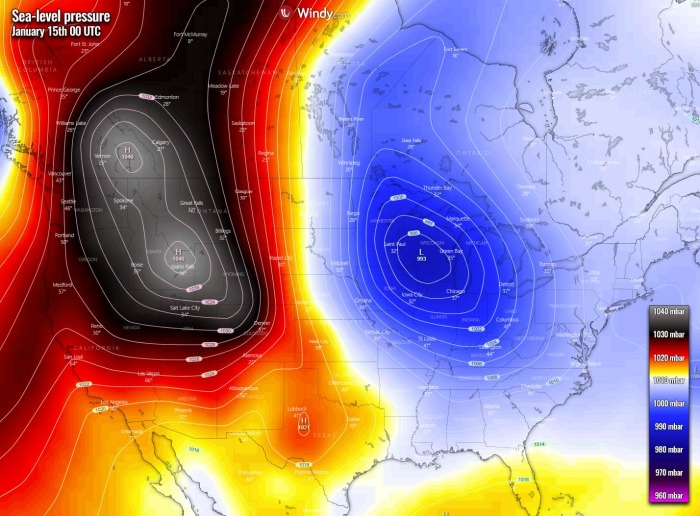 This means nothing else than a strengthening cold advection of the Arctic air mass deep south into the central portions of the United States. Thanks to the remaining relatively strong pressure gradient between the two systems. Keep in mind we are now in mid-January, so the temperatures will be quite colder across the central parts. The European model hints close to 8 °C below the normal for this time of the year. 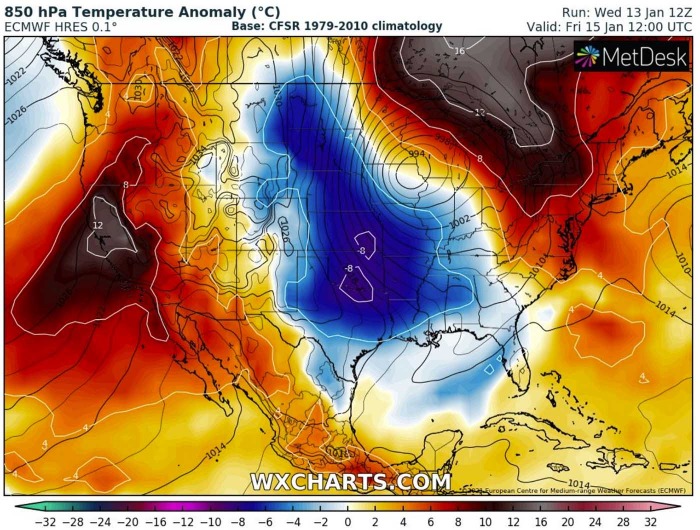 With such a pattern established, the help of the upper Highs from Canada, the core moving towards the Southeast United States deepens even more into the weekend. The core will become very intense while crossing Tennessee Valley into the Southeast states through Friday night into Saturday morning. Easily dominating the eastern half of the United States and the Southeast. Further strengthening of the upper-level pattern is also seen on the west and especially over Canada. 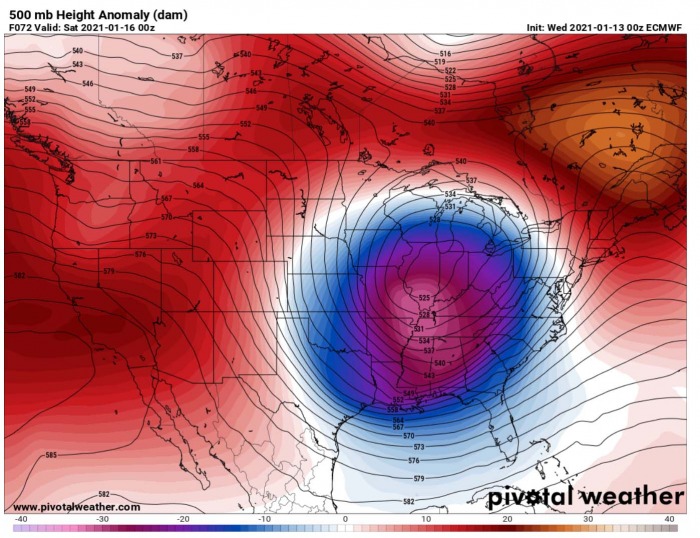 The intense upper core will maintain a strong surface low, although its central pressure will be gradually rising on Saturday. This will diminish the winter storm potential for the Great Lakes and the Northeast United States, but its size will still favor northerly winds towards the Gulf Coast. Again, thanks to the high pressure established further west. 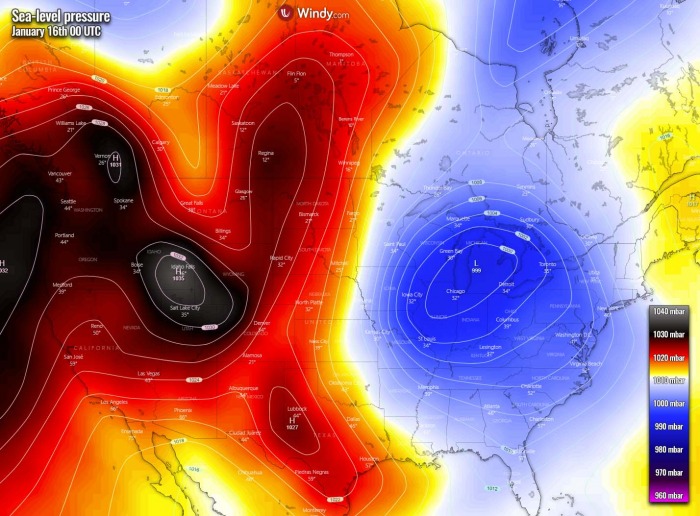 Northerlies will continue blowing far south and bring very cold air mass all the way across the deep South of the United States over the weekend, including the Gulf Coast, Florida, and most of the Gulf of Mexico as well. Extreme temperature anomaly is forecast, with even more than 10 °C colder temperatures than normal spread across the Southeast and the Central/Eastern Gulf Coast on Saturday. 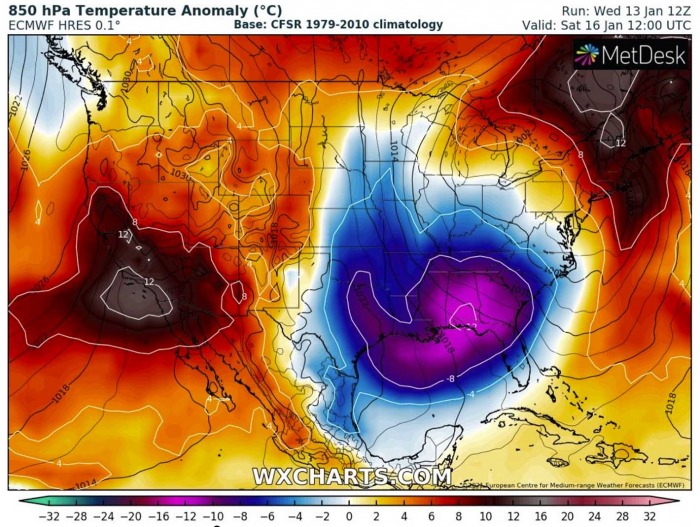 This could bring below-freezing temperatures from Mississippi across Alabama into Georgia and parts of northern Florida in the morning on Sunday.

THE SYSTEM FINALLY WEAKENS BY SUNDAY

The intense upper wave will be finally losing its strength over the weekend, as it ejects the Southeast United States and moves off the East Coast to the Atlantic on Sunday. Its core will still be quite deep, but its relation to the surface will be significantly lower. The surface low will move into the Northeast and New England, while higher pressure will begin spreading over the Deep South of the country. 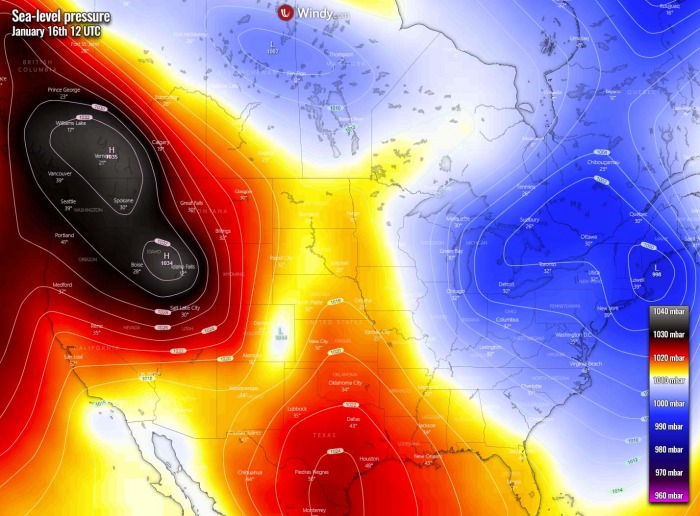 The remnants of northerlies across the Southeast will still maintain very cold air mass aloft but will be weakening. However, still quite lower than normal temperature anomalies will be spread across the region, gradually improving to the north and west. 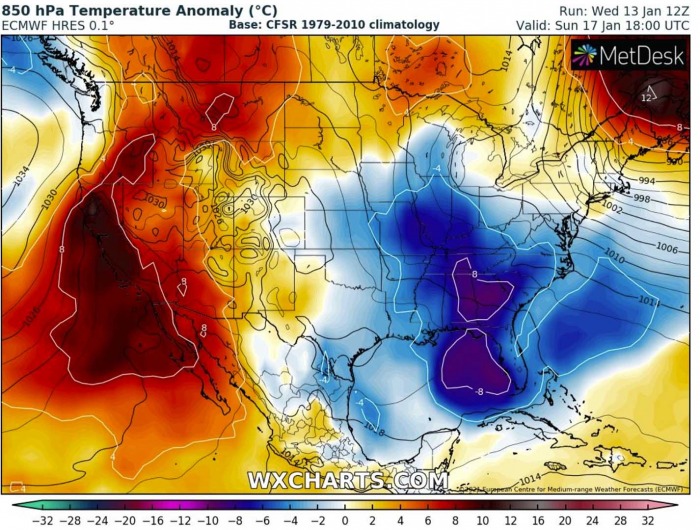