The second week of November will bring a significant winter storm that is forecast to spread across the Midwest and the central United States late this week. Much colder temperatures with possibly a lot of snow and blizzard will arrive with a deep low-pressure system into the Upper Midwest after mid-week. The system will also spread towards the East Coast and Southeast U.S. over the weekend.

A major winter storm is becoming increasingly likely for portions of the northern half of the Great Plains, Midwest, and Great Lakes. Strong winds, heavy snow with blizzard conditions will be possible. A strong cold pool will spread into the northern and central U.S. first, then also towards the east and southeast.

As it often happens during the fall months, the intrusion of much colder air from Canada and collides with still pretty warm air masses across the southern and central U.S., potentially resulting in wild wintry storms.

The rather rapidly deepening low will take place across Dakotas and move towards the Upper Midwest and the Great Lakes while worsening the weather conditions with potentially very heavy snow and blizzard with whiteout conditions in its wake.

A battle of cold air with the warmth to the south will likely lead to severe thunderstorms across the mid-Mississippi Valley on Wednesday and Ohio Valley on Thursday.

A start of the week will bring warmth first, then the cold air mass intrusion from Canada will clash with the remaining warmth and start the much more dynamic weather for many. Here is how the weather patterns will swing into mid-November.

MUCH ABOVE NORMAL WARMTH OVER THE NATION, BUT SOON LOSING ITS STRENGTH

Pretty stable weather across the U.S. this weekend has brought nice fall weather for many. The air mass has warmed up quite significantly, thanks to a strong upper High that has parked over the nation. The upper ridge pattern will begin gradually collapsing as the week continues, but both Monday and Tuesday should continue with fair and warm weather. 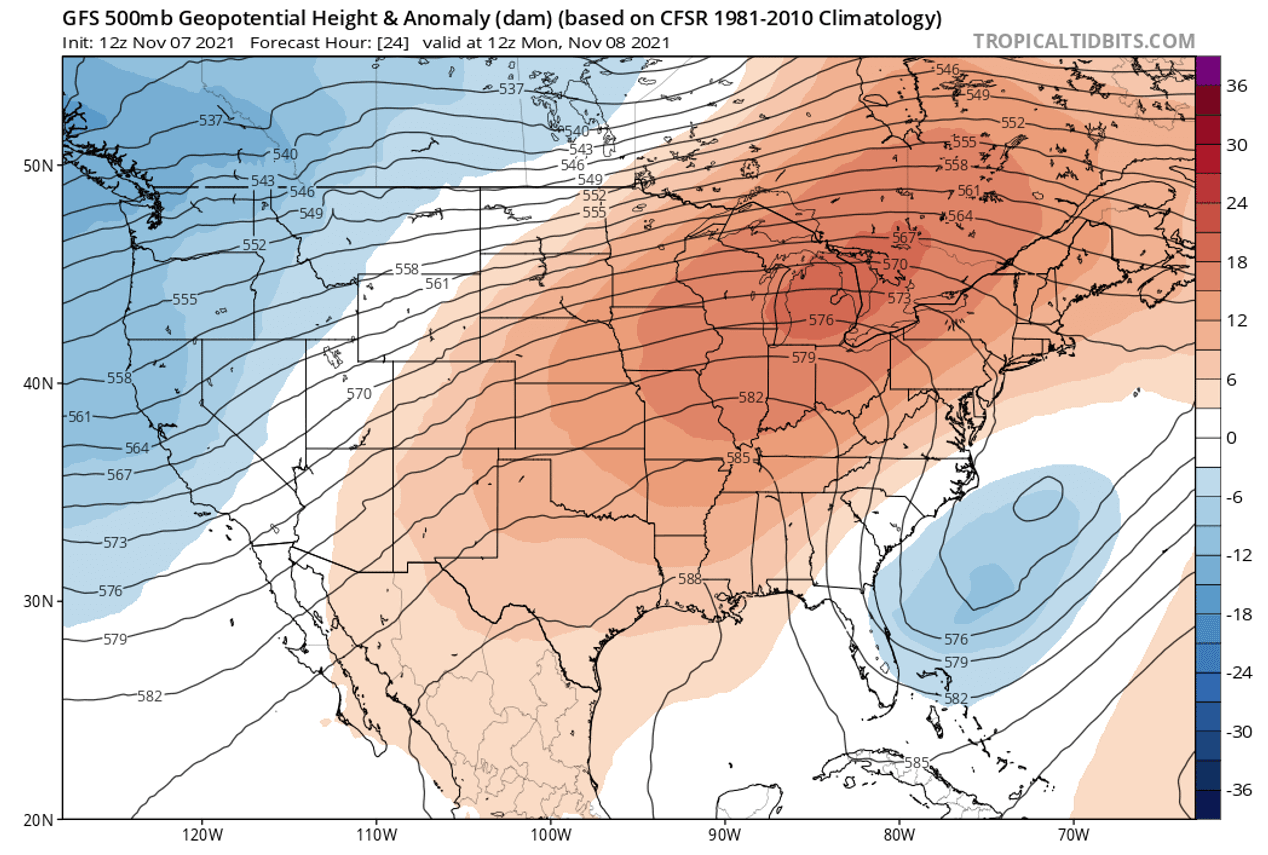 Basically, there is not much of the weather ongoing right now. Interestingly, a winter storm from the northeast Pacific has resulted in quite convective weather for the Pacific Northwest. A rare waterspout has been reported in the Strait of Georgia in front of Vancouver, Canada on Sunday.

Much of the Contiguous U.S., with exception across the West Coast and Pacific Northwest, will experience well-above normal temperatures through Monday and Tuesday. The central Plains, Midwest, and the Great Lakes are under the strong warm dome, temperatures are nearly 20 degrees F warmer than normal for this time. 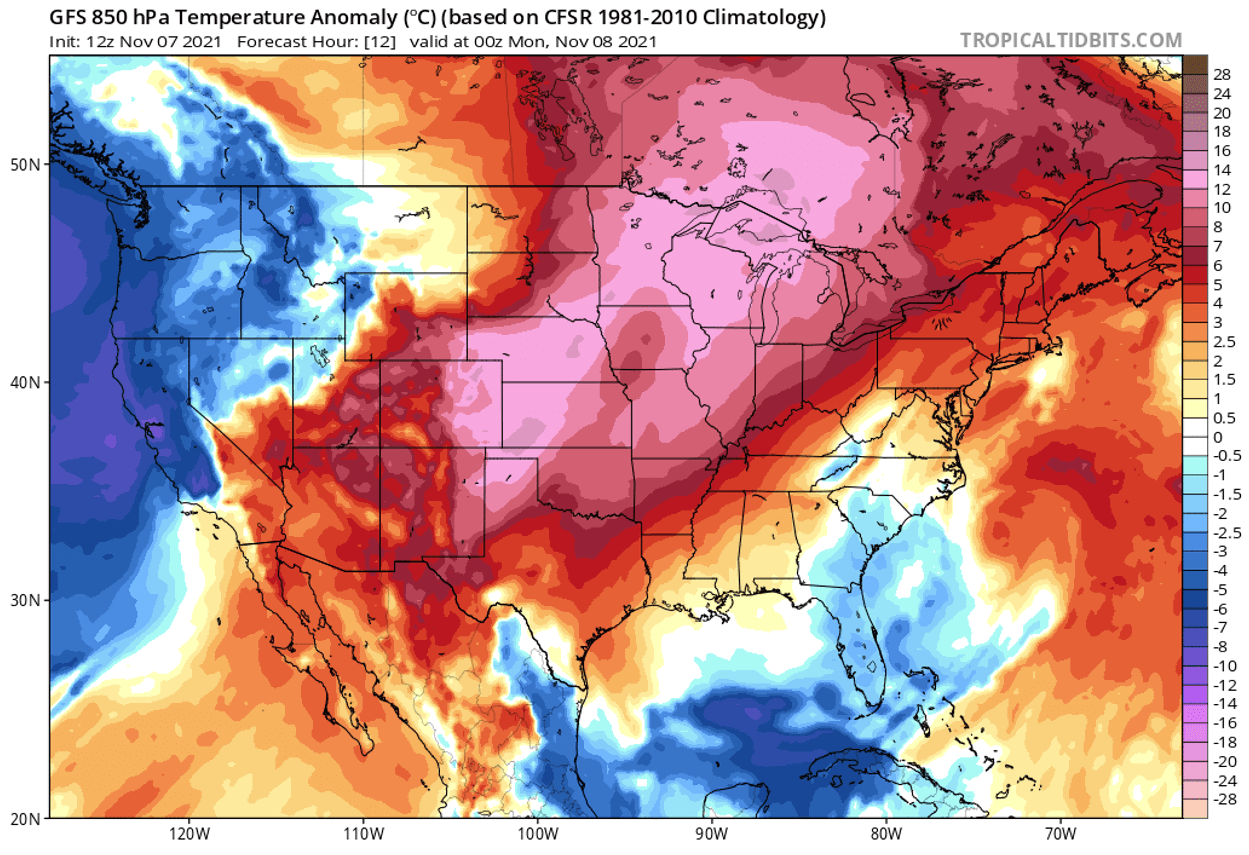 Changes will begin on Wednesday as the low-pressure system will be shaping up under a strong wave emerging from Canada. Temperatures will be gradually cooling down.

Once the low is strengthening from Wednesday night into Thursday, heavy rain will gradually change to snow across the northern (High) Plains, and Upper Midwest. Areas from Wyoming to a large part of the Dakotas and Nebraska, through Minnesota and Wisconsin, as well as across the international border into Canadian western Ontario, will likely see some decent accumulating snow until Friday. 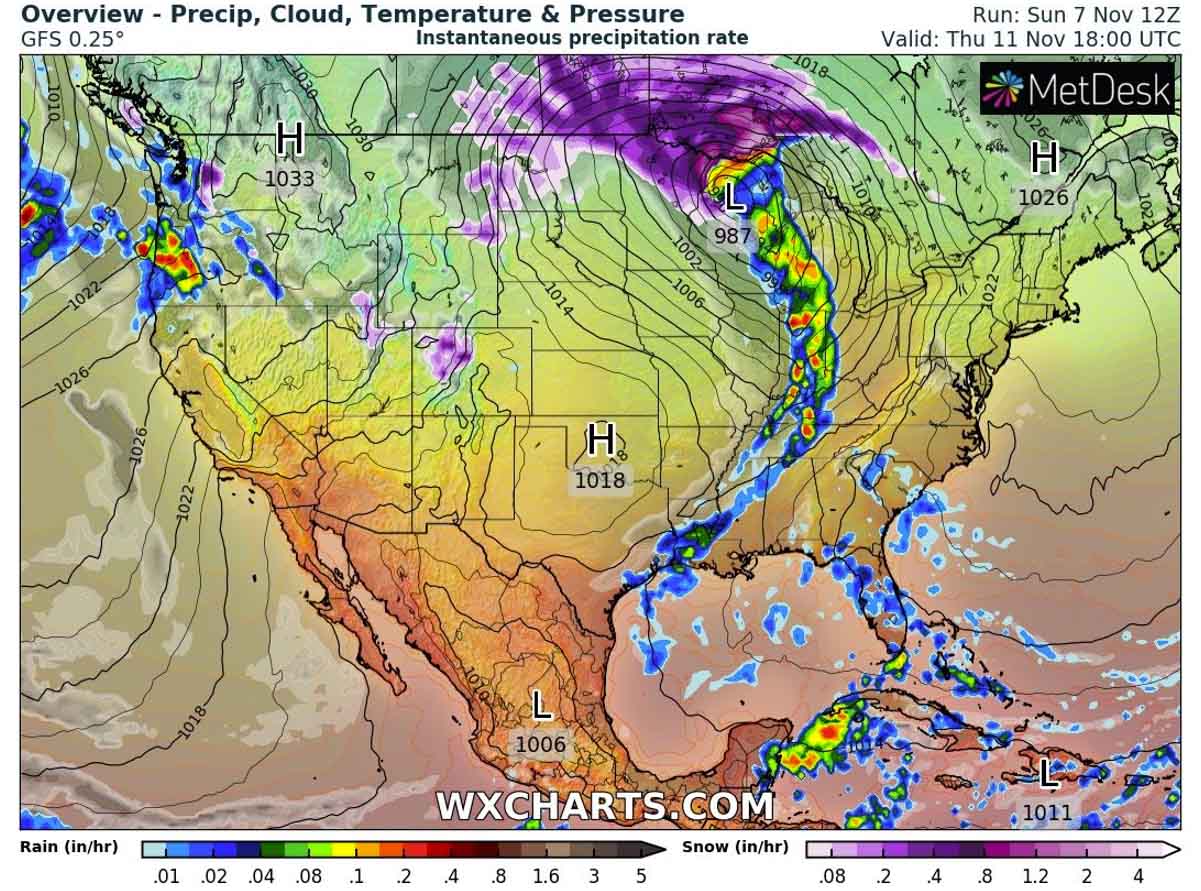 How intense the snowfall will develop strongly depends on the storm’s track, also how much snow could be accumulated along the system. The highest accumulations are more likely across eastern North Dakota, Minnesota, and Wisconsin, potentially more than 10 inches in some parts.

After Friday, the winter storm will gradually slow down while moving over the northern Great Lakes. It is likely that snowfall will continue from Friday into Saturday in this region and is unlikely to be very heavy, but wintry conditions are expected.

In the wake of the surface low, strong to severe winds will develop. Combined with heavy snow, becoming drier as cold air mass progresses further south, blizzard conditions will develop. Travels across North Dakota, Minnesota, and Wisconsin could be significantly disrupted. Whiteout conditions and snowdrifts will be quite possible. 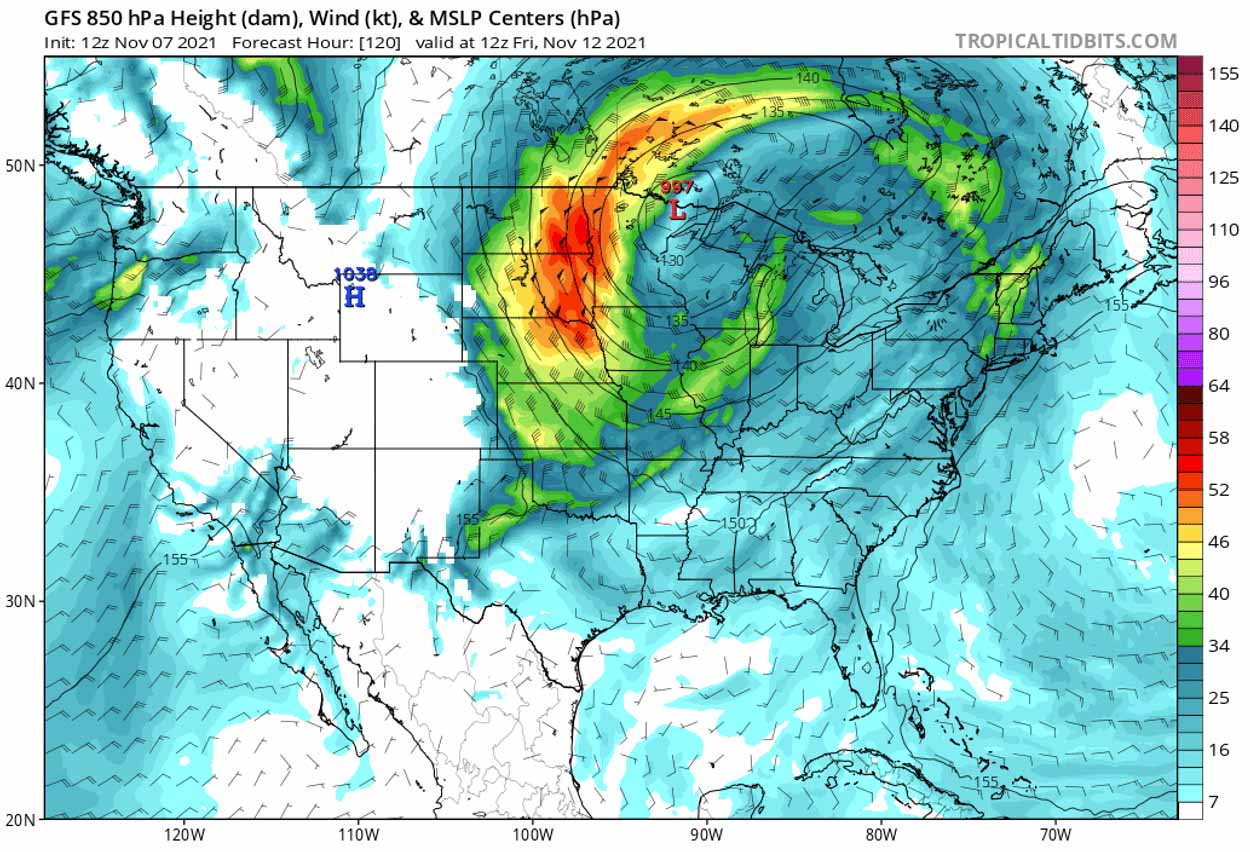 With potentially heavy snow also developing across Minneapolis, airline disruptions and travel delays can be expected as well.

The arrival of the strong cold front farther south across the northern U.S. after Thursday will result in much lower temperatures that were experienced just recently, potentially more than 30-40 degrees lower for many. By Friday morning, the cold air mass with below freezing will already spread across Colorado, much of Nebraska and Dakotas into Minnesota and northern Wisconsin. 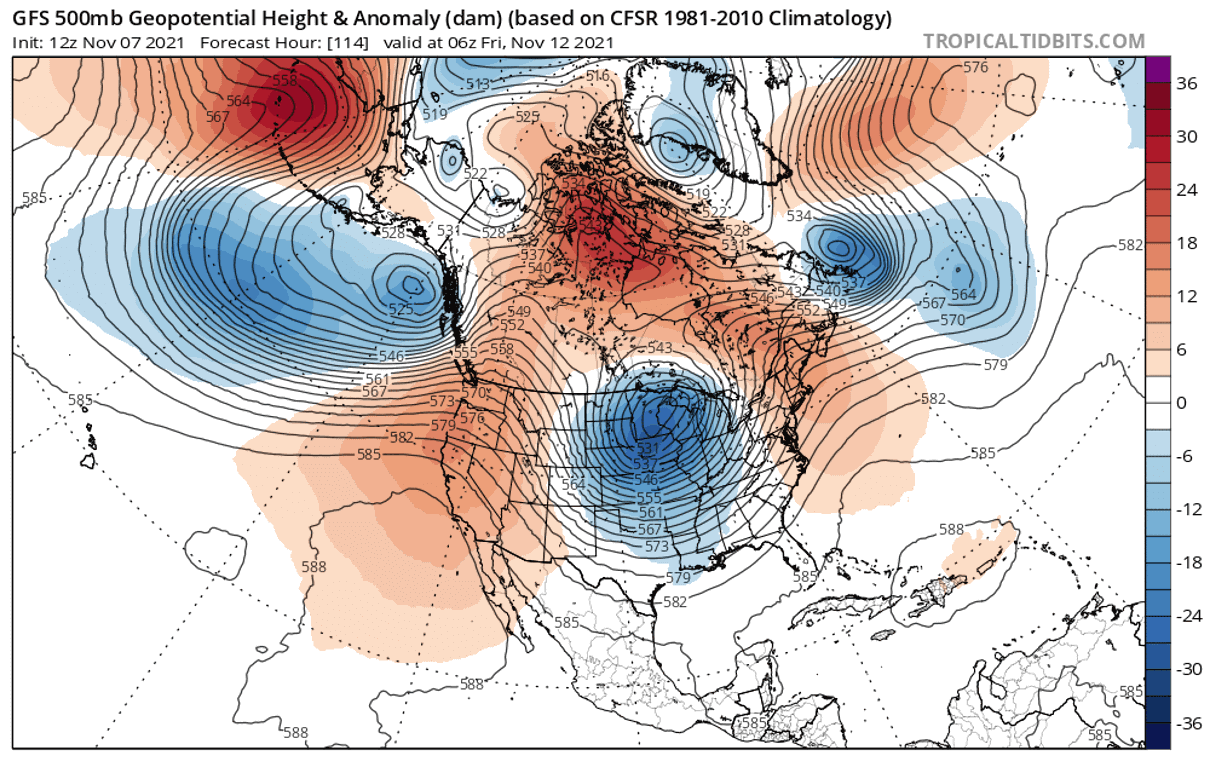 With the push of the much colder air mass under the deepening upper wave towards Thursday, areas to the south could see a widespread outbreak of severe thunderstorms as well. While the cold pool will be very large. 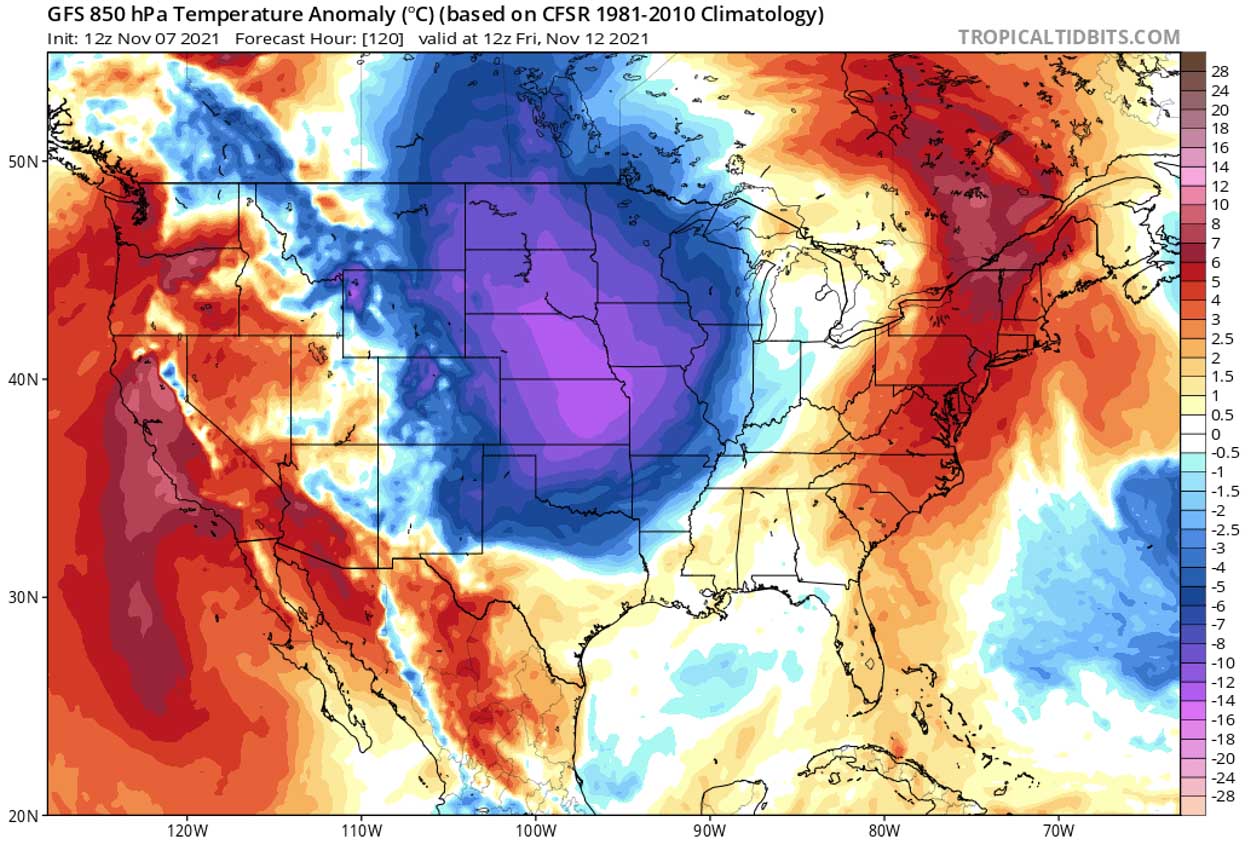 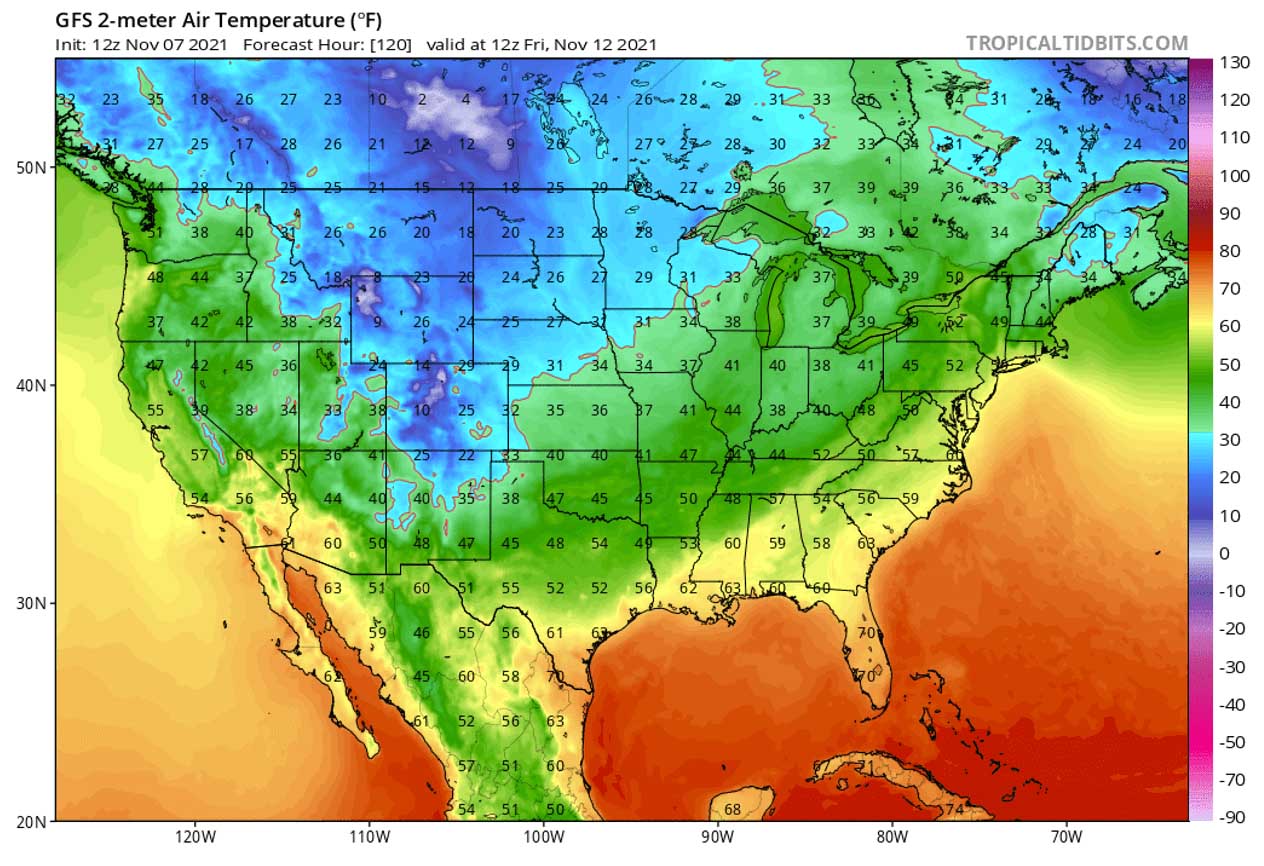 Temperatures will be the coldest across Colorado, Wyoming, Montana, and Dakotas on Friday. Likely with morning temperatures bottoming out into low 20s to mid/upper 10s Fahrenheit in some areas. Fresh snow will also help those to be much lower.

With the progress of the low-pressure and frontal system farther east and southeast into the weekend, warm temperatures will be replaced with much cooler air mass across towards the Ohio Valley and across the Southeast U.S. 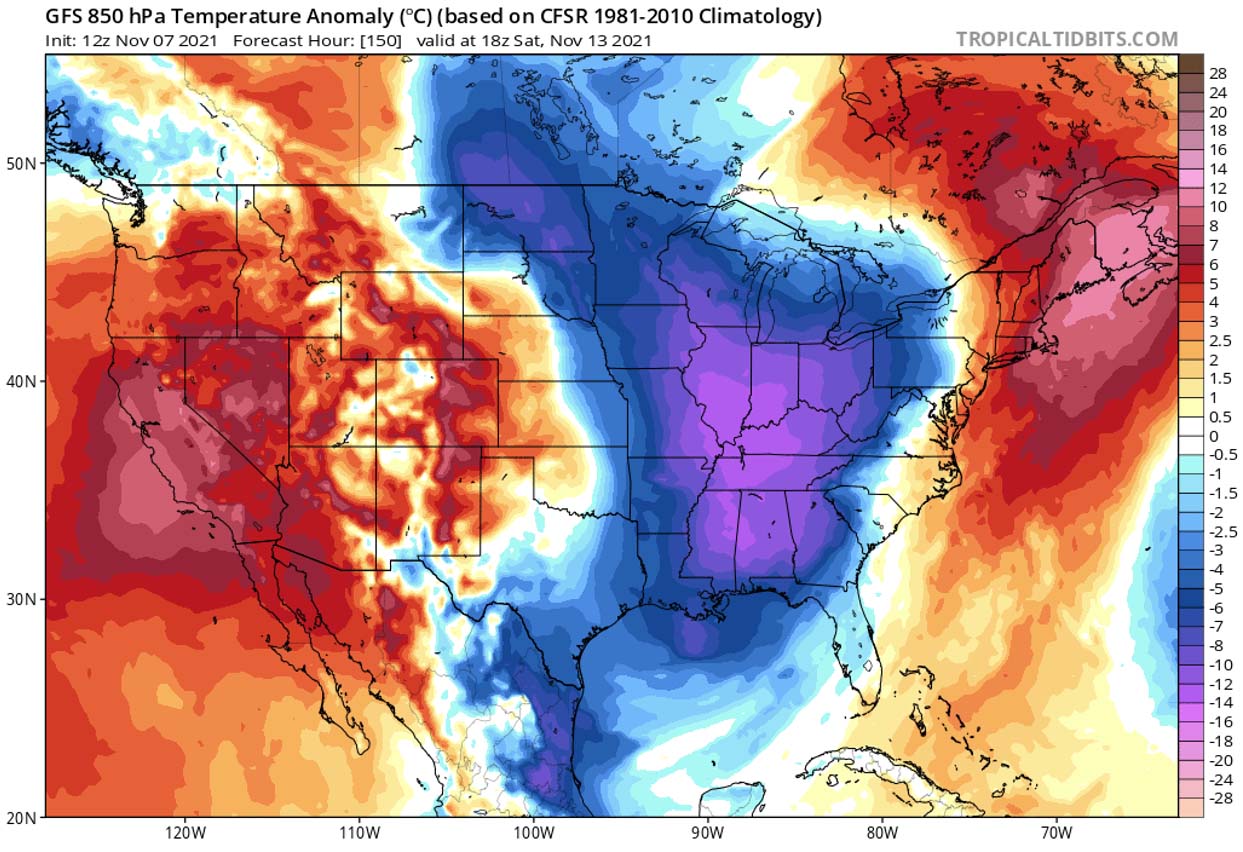 The warmth will surely be swept away once we go further into the weekend and will reach the Gulf Coast, Florida, and the East Coast with time as well. It will be time to find those warmer clothes soon.

Saturday morning will bring below-freezing temperatures and the first seasonal frost for most of the Midwest as well as for many across the central U.S., including most of Missouri, Illinois, Indiana, Kentucky, and Ohio. 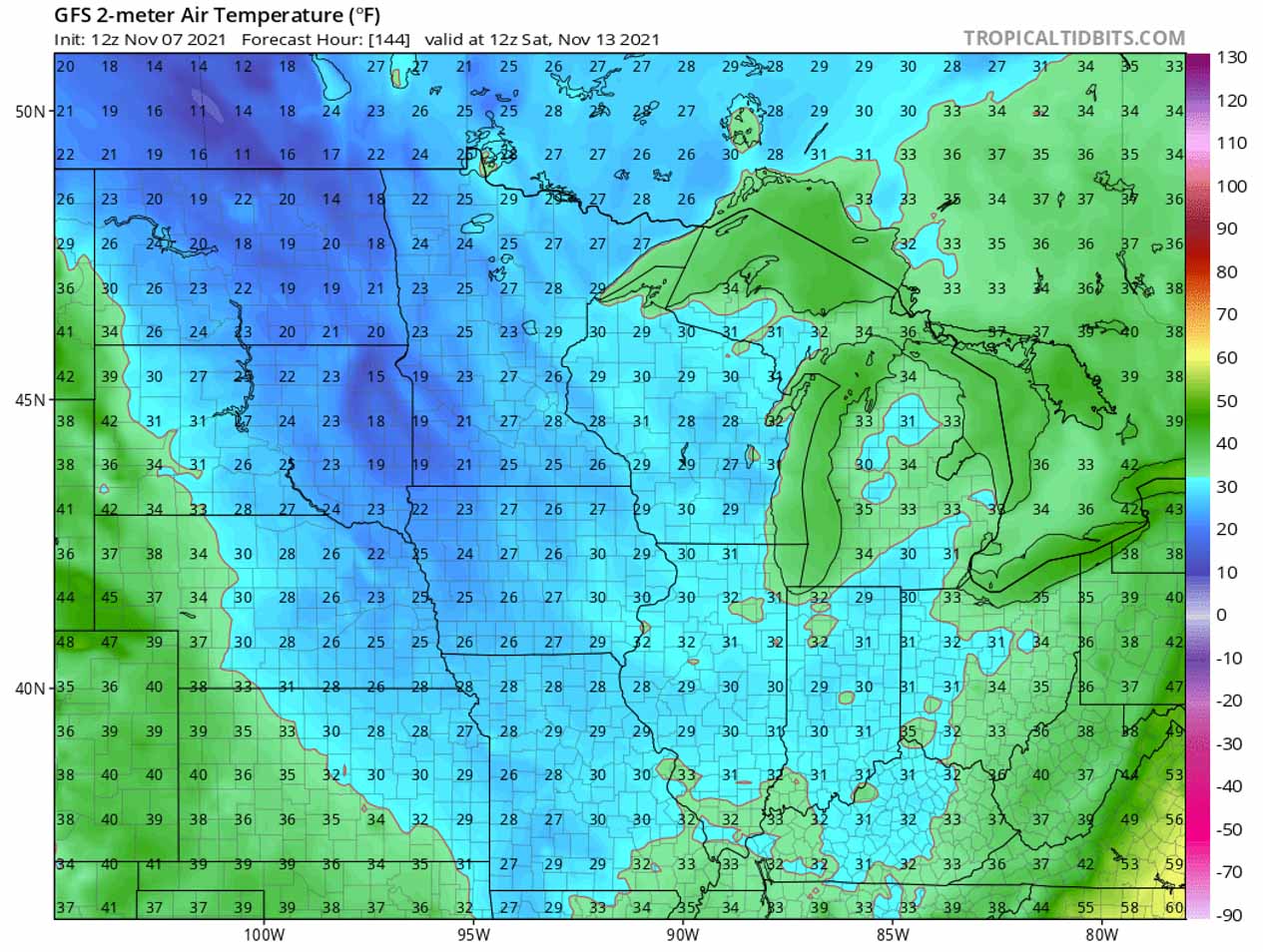 The coldest morning will indeed be farther north, across the eastern Dakotas, Nebraska, Iowa, and Minnesota. The lowest temperatures could be down to the upper 10s into low 20s in these areas.

While a major winter storm and heavy snow with blizzard develop near the center of the deep low across the Upper Midwest and northern Plains, strengthening winds and interaction of cold outbreak with warmth will develop potentially significant convective weather to the south.

Portions of the mid-Mississippi and Ohio Valley are under the belt of well-above-average temperature from early November, with quite a lot of potential energy in place. Winds will be increasing, supporting strong shear in the upper levels – a recipe for organized convective storms along and ahead of the main cold frontal boundary. 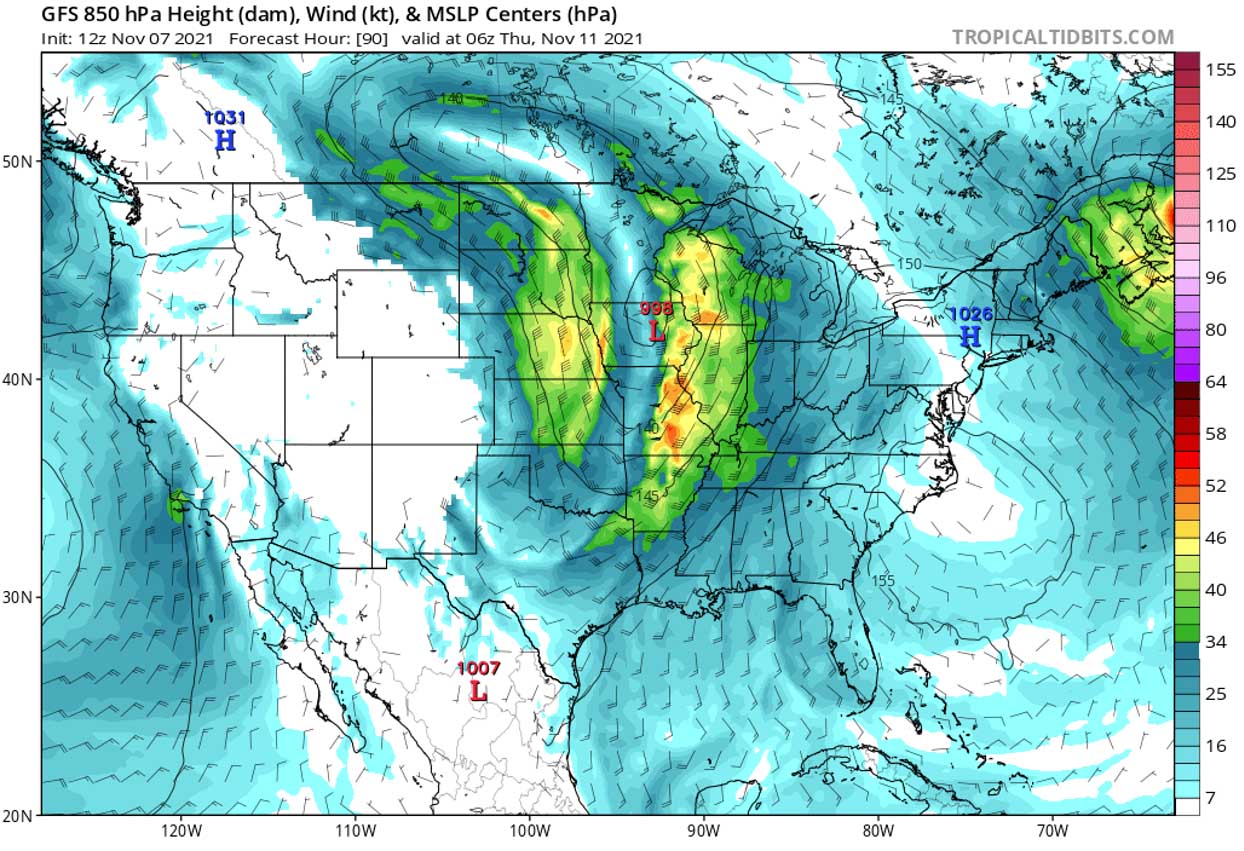 Severe thunderstorms will likely be forming along the eastward-moving cold front on Wednesday, from Iowa across Missouri to eastern Oklahoma. Gradually expanding towards the mid-Mississippi Valley into the Wednesday night.

The threat of severe thunderstorms will likely continue into the Ohio Valley and towards the Southeast U.S. on Thursday and also on Friday. 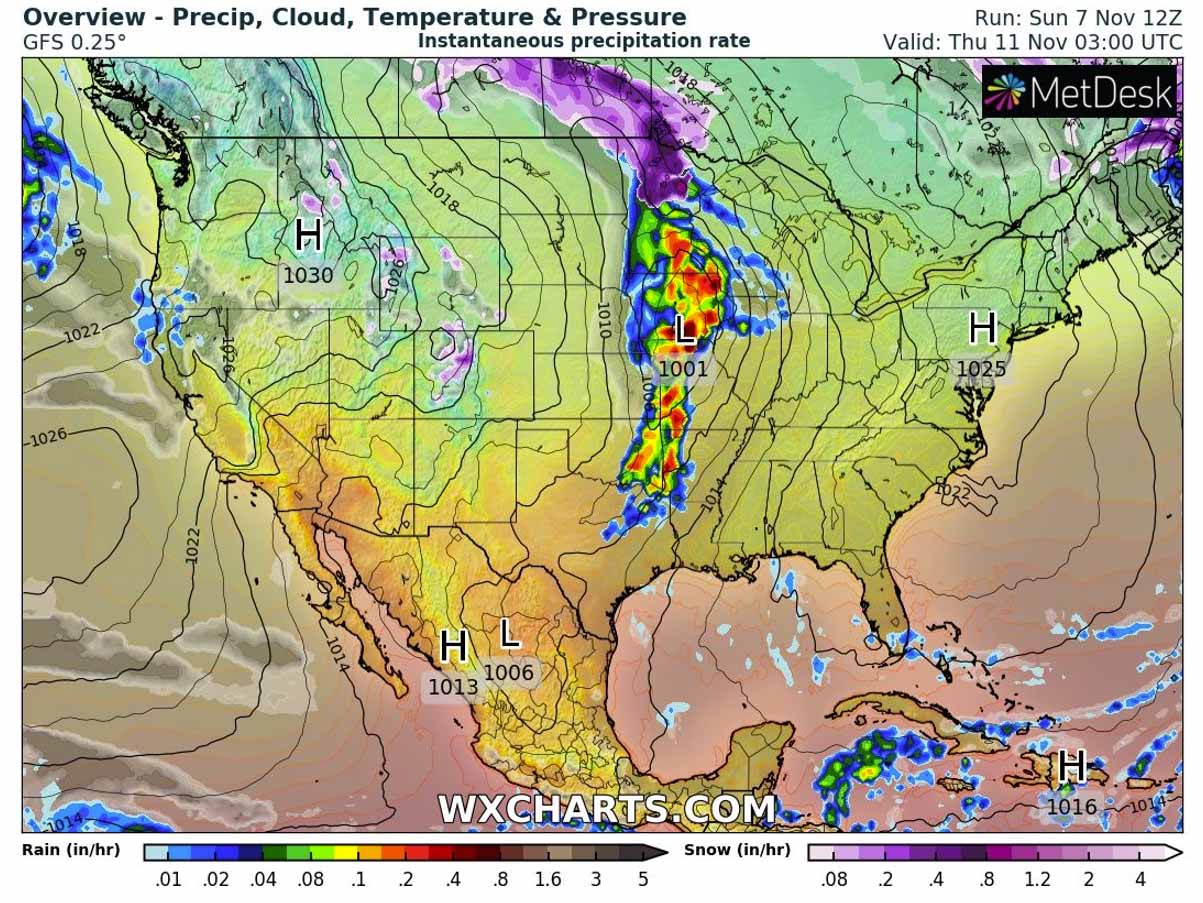 Thanks to the pretty large low-pressure system and dynamic conditions, all severe weather hazards are possible with severe thunderstorms from Wednesday into Friday, especially damaging wind gusts, large hail, flash floods, and even a few tornadoes in some areas.

***Images in this article are provided by Windy and TropicalTidbits.