The final days of Summer and the first days of Fall season 2021 are forecast to bring a quite significant cold blast across part of the United States. A much colder air mass will spread south from western Canada into the US Northwest. The first snow of the season will accumulate across higher ground in some areas.

It has been quite a warm period lately and also a pretty dry period across the northwestern United States. So far, September has been very warm, about 4-6 °F above normal for the Rockies and also across the Great Plains. This is soon forecast to change as the Summer season officially ends with a cold blast in the coming days. 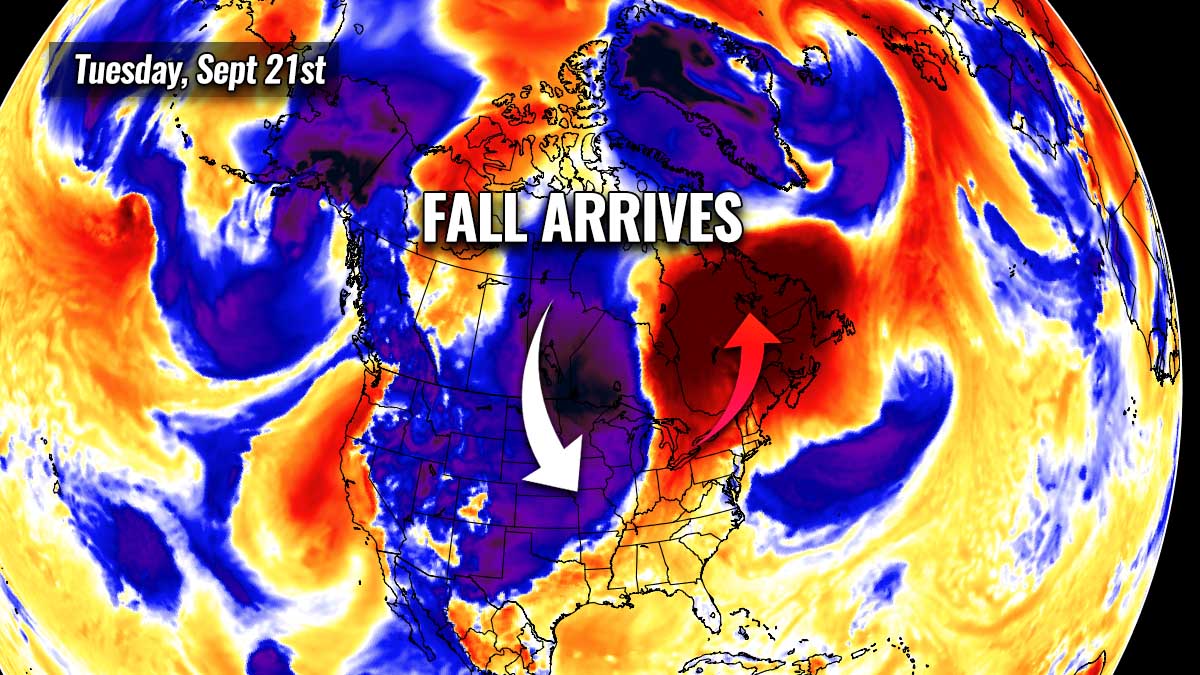 The long-lasting and historic summer heatwaves brought extreme drought, leading to destructive wildfires which are still burning in the West. The wild summer weather is finally coming to an end, finishing with a short, but the pretty intense heatwave that is forecast to develop across the northern US and southern Canada this weekend.

But then, much-needed rain and significantly colder temperatures are forecast to arrive as we come closer to the start of the Fall Season 2021.

Quite lower temperatures will first develop across the Pacific Northwest which will also combine with a lot of rain in the region, the first big rain event for the last six months. This weekend refreshment merges with the general Arctic blast over Canada, spreading towards the Contiguous United States through early next week. 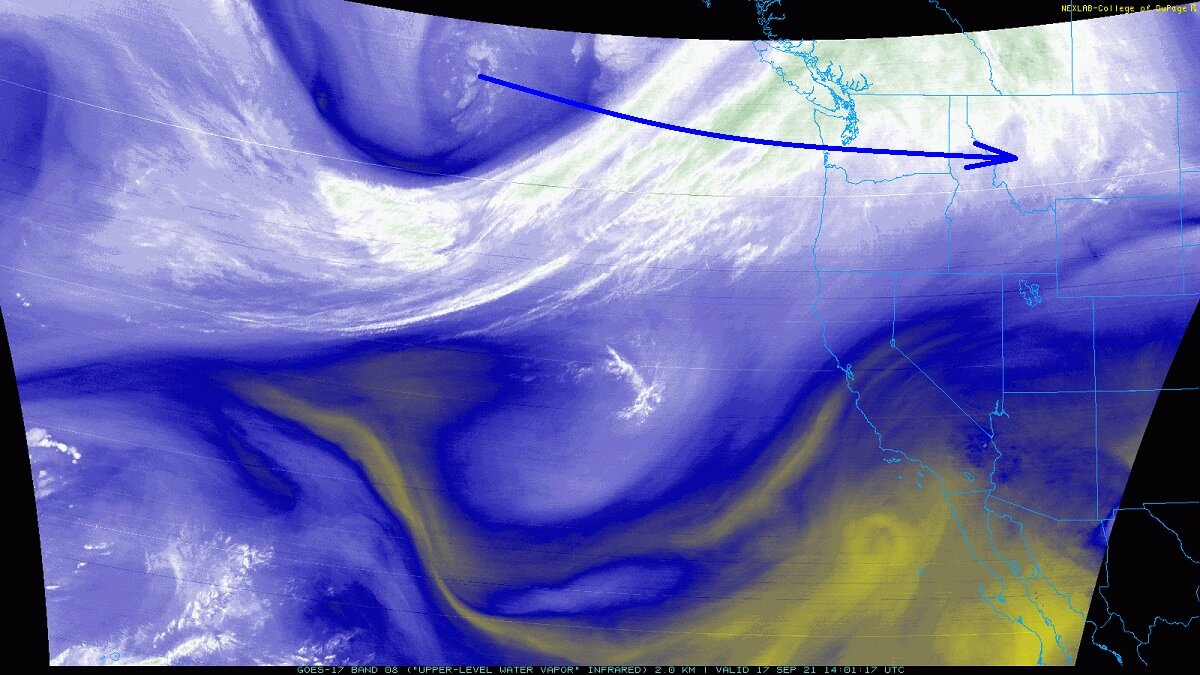 About 40 degrees Fahrenheit temperature change is forecast to bring fall season weather with low morning temperatures, likely leading to the first frosts for some. Generally, much colder weather will also blanket the higher Northern Rocky mountains with fresh snow.

The first snowfall of the Fall Season is forecast to accumulate across parts of Idaho, Montana, Wyoming, as well as northern Utah and Colorado through the early days next week. Snow could mix down to about 6,000 feet with quite some accumulation above these elevations.

As we can perfectly see from the video animation above, the significantly colder weather arrives soon after the very hot days over the weekend spread across the Northern United States. So the change will be quite drastic as temperatures are forecast to fall from mid-90s °F to nearly 30-40s in a matter of fewer than 36 hours.

Let’s see how the pattern evolution ends this Summer and flips right as we enter Fall Season 2021.

SUMMER ENDS WITH A MASSIVE WARMTH FAR NORTH TOWARDS CANADA

The final weekend of Summer 2021 is coming up, then the official start of the Fall Season arrives on Tuesday, Sept 21st. Over the weekend, a strong upper-level ridge develops a heatwave for the northwestern US and southern Canada. Temperature is expected to push into the upper 80s to low 90s, possibly even above mid-90s in some areas across the High Plains and Dakotas.

The general weather pattern across North America reveals a classic dipole combo of blocking high over the continent against a deep trough developing over the Gulf of Alaska, moving into the Pacific Northwest.

This will bring much-needed rain for the region, as well as quite colder weather with the potential for some snow in the higher mountains.

Farther east, a much warmer/hot weather will develop under the ridge. Stable and dry weather results in significant heating across the northern and central Plains, as well as across the High Plains. The lowest parts of the atmosphere will be more than 20 °F above normal on Saturday through Sunday.

Saturday’s peak afternoon temperatures will rise into the mid to upper 90s across eastern Montana into western Dakotas, also northern Nebraska. The Upper 80s in eastern Wyoming as well.

A day after, it will be another hot day across the Plains, with low to mid-90s across South Dakota, Nebraska, and Kansas, including Colorado Plains. While the temperatures will already be much colder in Idaho and Montana.

With low to mid-80s experienced on Saturday across Montana, Idaho and western Wyoming, those will be in the mid-50s just 24 hours later on Sunday peak afternoon hours as the front surges through in the late morning hours.

Temperatures will push further down overnight to Monday.

The arrival of the strong cold front farther south across the Great Plains from late Sunday into Monday will result in much lower temperatures than over the weekend. By Monday evening, the front will already reach southern Colorado and central Kansas, while hot temperatures will remain farther south and east.

Tuesday brings a much colder air mass farther south across the Plains, temperatures at the 850 mbar level will be about 6-10 °C lower than normal for this period. With the surface front surging farther south and east.

By Tuesday afternoon, the front will be extended from Illinois across the central Mississippi Valley towards northern Texas and continue southeast. 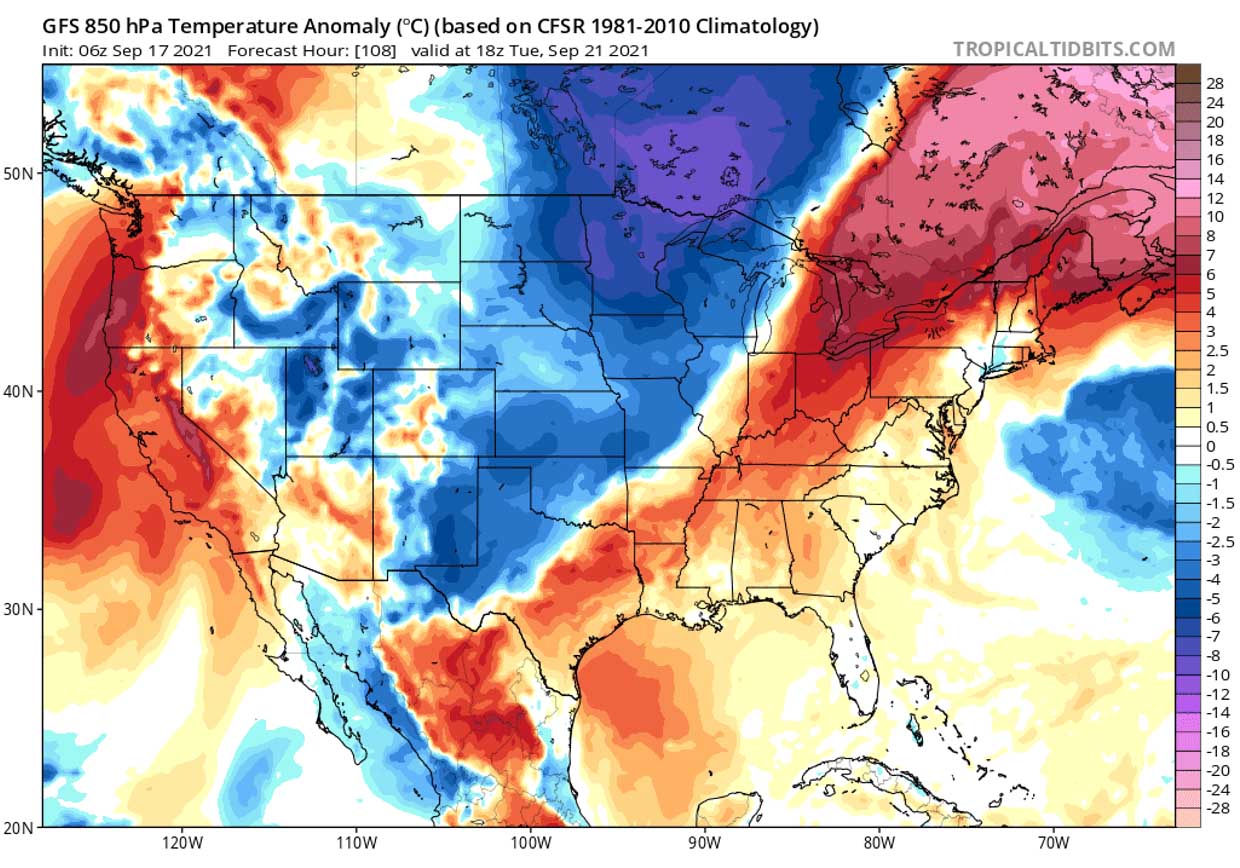 The cold air mass will have barely any reason to stop its progress far towards the south until it reaches the Gulf Coast on Wednesday. The coldest air mass spreads into the central parts of the Contiguous United States, spreading also towards the east.

In the event’s wake, the strengthening of the upper ridge starts again towards the Pacific Northwest by mid-next week, so western CONUS should return to warmer weather. The pattern will be creating a dipole with a strongly positive temperature anomaly across the west versus a strongly negative anomaly to the east of CONUS.

A cold air mass is forecast to gradually spread further east-southeast on Thursday and Friday, maintaining into the weekend. Resulting in cool fall season weather for the East Coast and the Southeast US. Some hints are that another intrusion might follow from Canada over the weekend, extending the fall season temperatures into Monday and Tuesday.

The temperature drop will locally be quite significant. Especially for the Northern Rockies and High Plains across Idaho, Montana, and Wyoming. Changing temperatures from nearly 20 °C above normal on Saturday to around 10 °C below normal on Monday morning, about 36 hours later.

A strong cold front will bring much colder temperatures in its wake, so Monday and Tuesday morning are forecast to result in the first frost of the Fall Season 2021. Precisely across Wyoming, interior higher Colorado, Montana, Idaho, and northern Utah.

The lowest morning temperatures could dip into the upper 20s, possibly into the mid-20s °F in some parts of the region. That’s about 40 °F lower than Saturday’s forecast High temperature.

FIRST SNOW FOR THE FALL SEASON 2021 ACROSS THE NORTHWEST US

The first significant cold event will also deliver some fresh snow with a notable accumulation across the High Plains and the northern Rockies. Measurable snow (4-7 inches) seems possible across parts of Idaho, Montana, and Wyoming. Precisely across the higher Wyoming, over the Yellowstone area. Some snow is also likely to accumulate across the higher mountains in Colorado.

Also farther north, across the higher terrain of British Columbia and southwestern Alberta in Canada, measurable snow is likely. Up to 10 inches, possibly even a tad more is possible there. Although it will be a quite significant cold blast, the snowfall and accumulation will be limited to the Rockies this time.

***
It looks like the start of the Fall season 2021 will introduce a quite significant temperature change across southern Canada and the northwestern United States, well coinciding with the official calendar dates. Nearly 40 °F colder temperatures will also bring the potential for the first morning frosts of Fal 2021, as well as some fresh snow over the Northern Rockies.

Images in this article are provided by Windy and TropicalTidbits.

Fall 2021 Forecast: La Nina will grip the weather in North America, while Europe Autumn will show its influence later in the season