Currently, an unusual cold anomaly is starting to move over the United States. But looking ahead, the weather forecast calls for a shift towards a more Summer mode, as the meteorological Summer begins on June 1st.

One key aspect of this weather forecast story is the jet stream and the global weather circulation. It connects the pressure systems across the hemisphere, helping to shape our daily weather.

In the warm season, the pressure patterns are generally weaker, so we do not have these wild pattern swings. But the weather is constantly in motion, and we will see an example of how cold anomalies can be quickly replaced with Summer patterns. 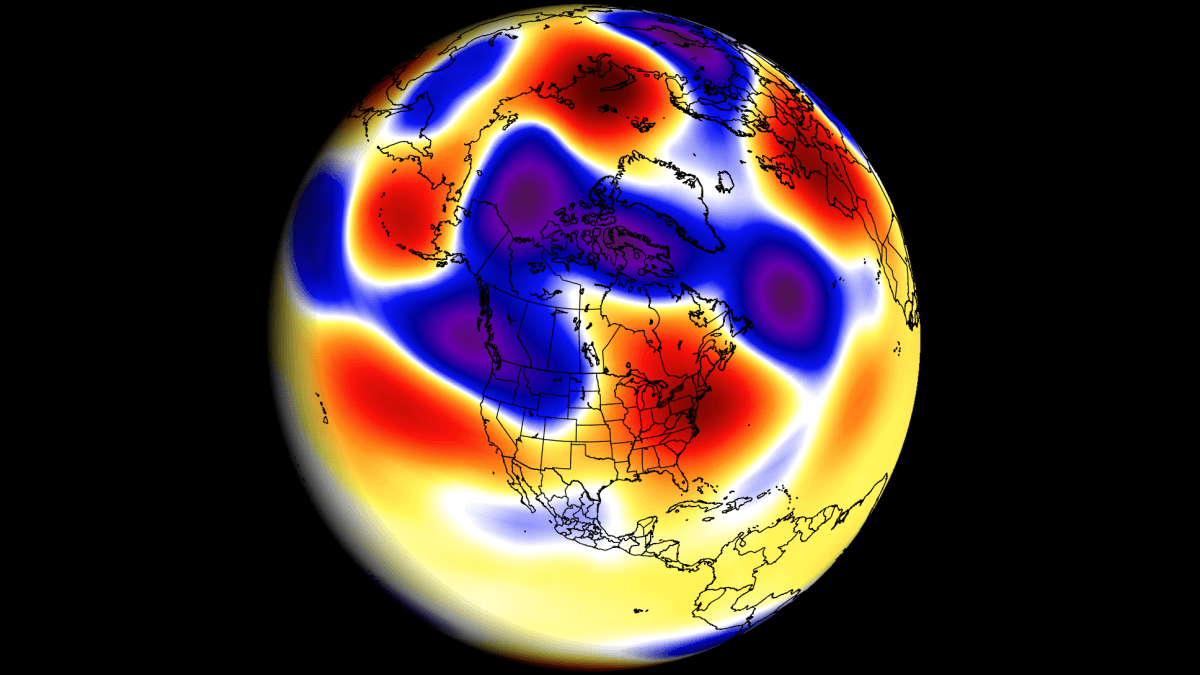 WEATHER PATTERNS AND THE JET STREAM

The jet stream is a large and powerful stream of air (wind) at around 8-11km (5-7mi) altitude. It flows from west to east around the entire Northern Hemisphere, interacting with pressure systems, affecting their strength, and shaping our weather at the surface.

It is driven by the temperature difference between the cold polar regions and the warmer tropics. It flows from west to east due to the rotation of the Earth.

In the image below you can see a simplified visualization of the global jet stream. The polar jet stream is more important during the cold season, while the subtropical jet stream plays a bigger role also during the warm season.

When talking about the jet stream in winter, it is directly related to the Polar Vortex. A strong polar vortex means a strong jet stream, and vice-versa. The weather impacts can also be very different.

In the warm season, however, the circulation works a bit differently, but the main principles remain.

A strong Polar Vortex usually means strong polar circulation thus a strong jet stream. This usually locks the colder air into the Polar regions, creating warmer conditions for most of the United States.

In contrast, a weak Polar Vortex can create a weak jet stream pattern. It has a much harder time containing the cold air, which can now escape out of the polar regions, into the United States for example. Image by NOAA.

The strength of the lower Polar Vortex and its influence can be tracked by the Arctic Oscillation (AO) index. It basically tells us if the polar circulation is strong or weak.

This March, there was a special event occurring in the stratosphere, with a warming event and the buildup of high pressure. It broke down the polar vortex. 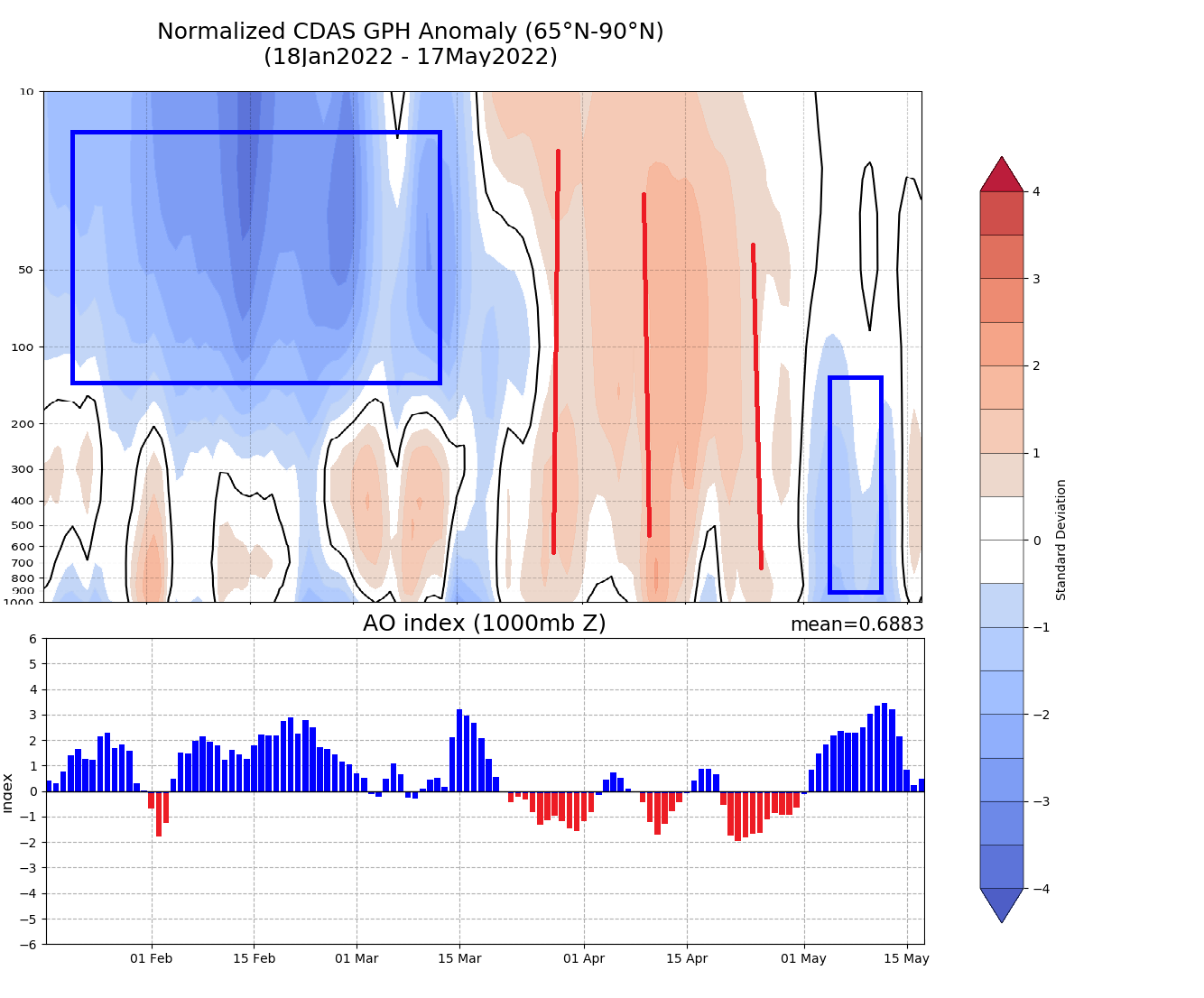 In late March, we had the polar vortex breakdown, and the AO index went into a negative phase for most of the time since. But this event is gone, and we are now in a stronger circulation regime.

Below we have the AO index forecast, and it shows a strong positive phase began in early May. The latest forecast shows that it will last at least till the end of the month.

As the AO and the polar jet stream are closely related, we have produced a special video, that shows the jet stream over the Western Hemisphere. You can see it traveling from the North Pacific over the United States and out into the Atlantic.

It gives you a good idea of how dynamic it is, and you can see it interacting with pressure systems.

Looking at the current weather pattern below, we have two main areas of interest. First is the deep low-pressure area over Canada and the United States. The other areas are a high-pressure anomaly in the North Pacific and a weak ridge in the eastern United States.

The strong ridging in the North Pacific actually helps to create an interesting weather situation. A ridge has a northerly flow on its eastern side. This means that between the ridge and the low-pressure one, there is a strong northerly flow.

Looking at the latest temperature anomalies, we can see a cold zone establishing over southwestern Canada and the northwestern United States. Much warmer than normal temperatures are currently recorded in the south-central United States.

Looking closer at surface temperatures, the latest data shows warmer than normal weather in much of the country, except in the northwestern United States. 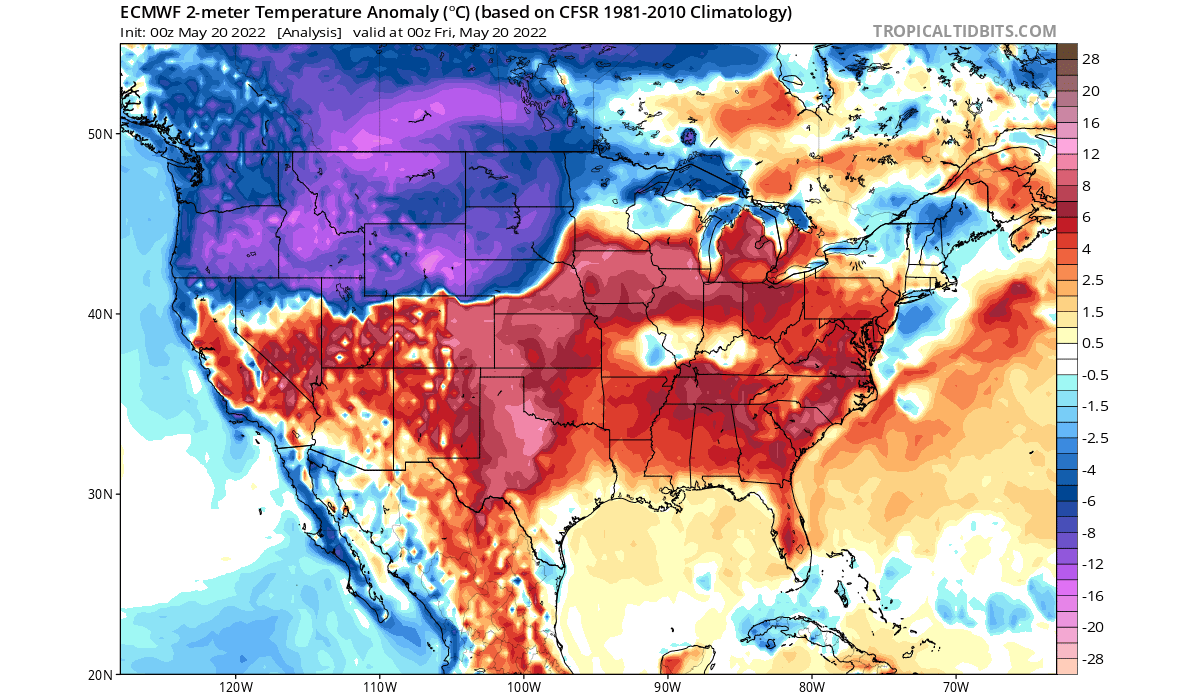 Going ahead, the weather forecast shows this cold anomaly to expand across the country, bringing cooler weather and potentially severe weather outbreaks.

The weather pattern in the next few days is most dynamic over North America. We can see the polar and subpolar regions with negative anomalies, reflecting the positive AO forecast. 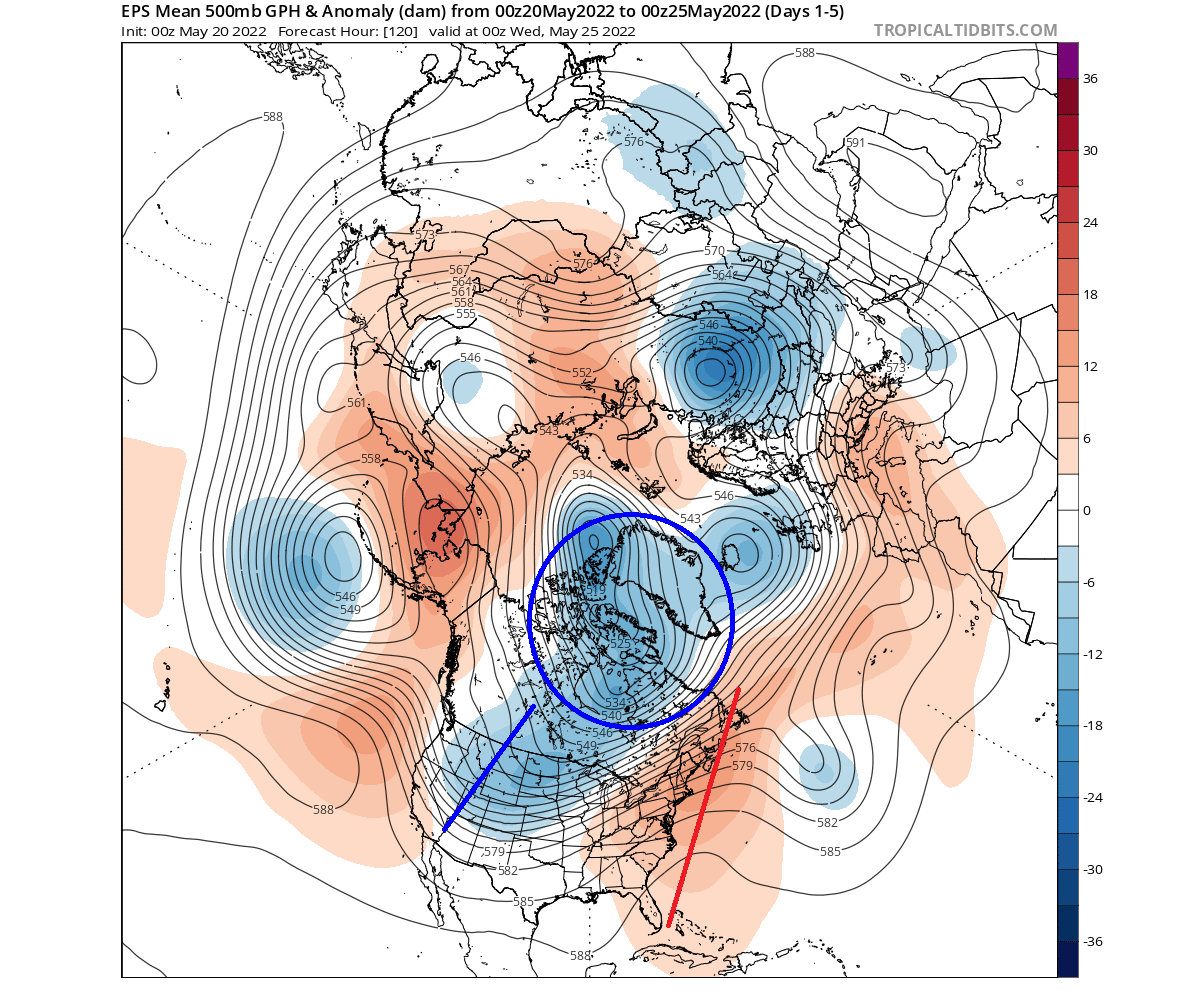 The low-pressure system descends further down from Canada to the southern United States. It is bending the jet stream, driving the warmer southerly winds into the east, and bringing down colder air from the north behind.

This pattern can be seen creating warmer conditions in the eastern and northeastern United States. But notice the unseasonable cold air anomalies coming down. The northerly flow behind the system is strong enough, along with the influence of the ridge, to bring an unseasonable airmass down from the north. 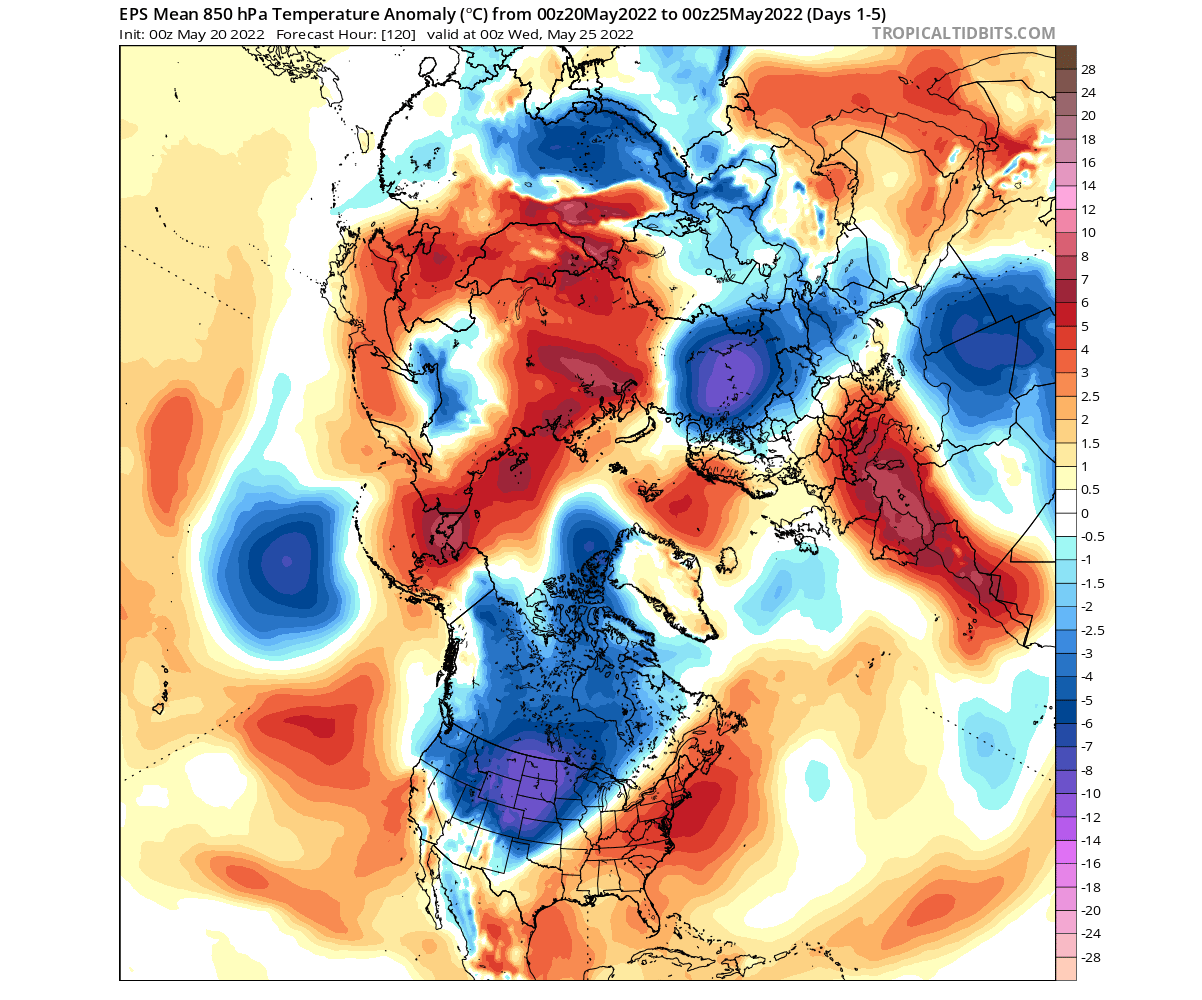 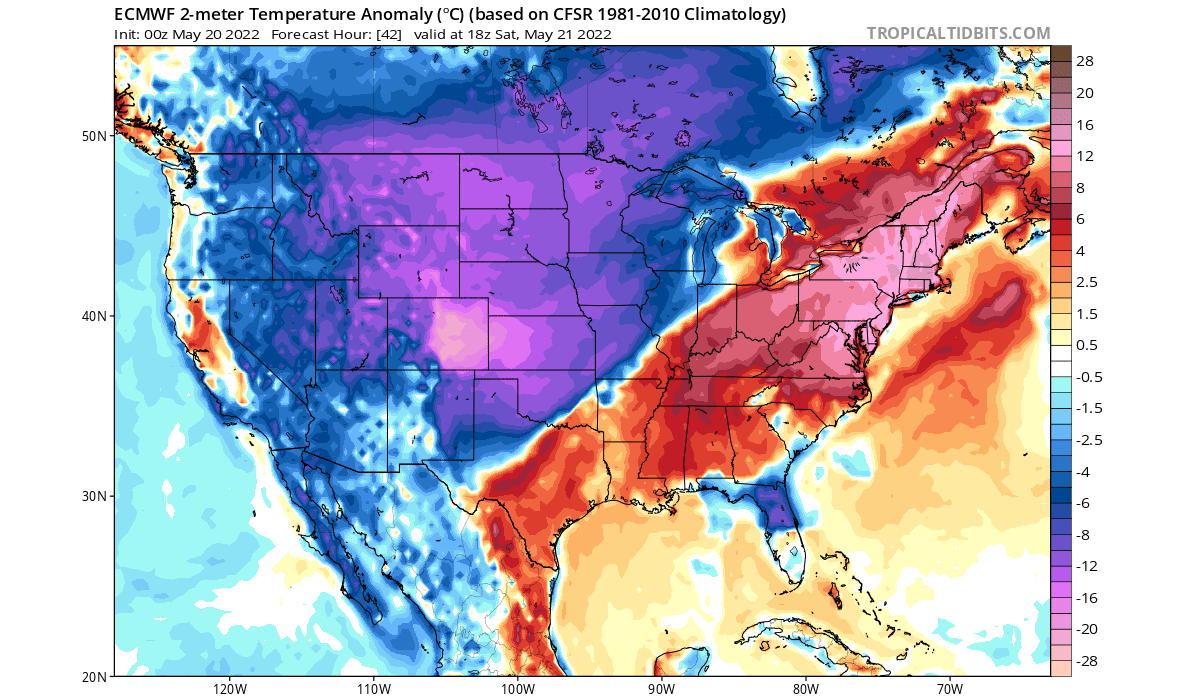 Going into early next week, we can see the cold air spilling over much of the United States in the image below. The anomalies are forecast to be quite unseasonably cold, especially across the Midwest and the northern United States

The actual temperatures are forecast to reach near low 40s in the upper Midwest, and 50s in the south-central United States. This is not like the winter cold, but it is unseasonably cold for this time of the year. 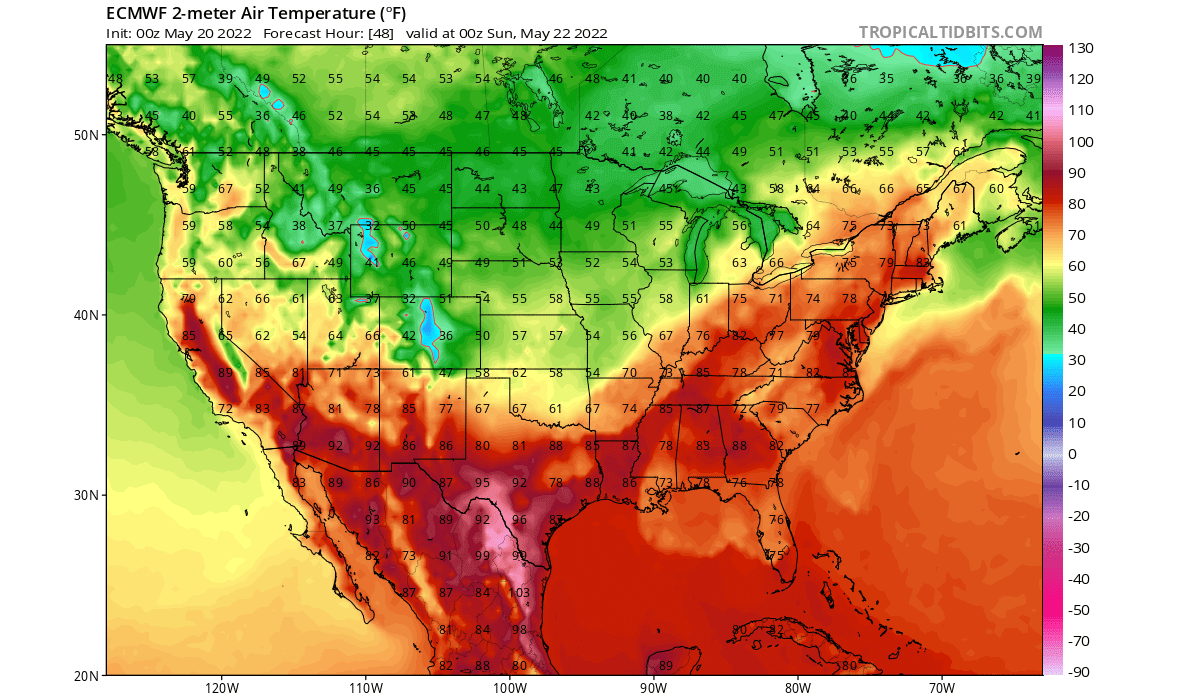 Precipitation-wise, we can see on the forecast below, that the cold airmass will be quite dry. Most of the precipitation will be on the frontal edge, as the cold air meets the warmer air. That of course increases severe weather potential over south-central and southeastern United States. 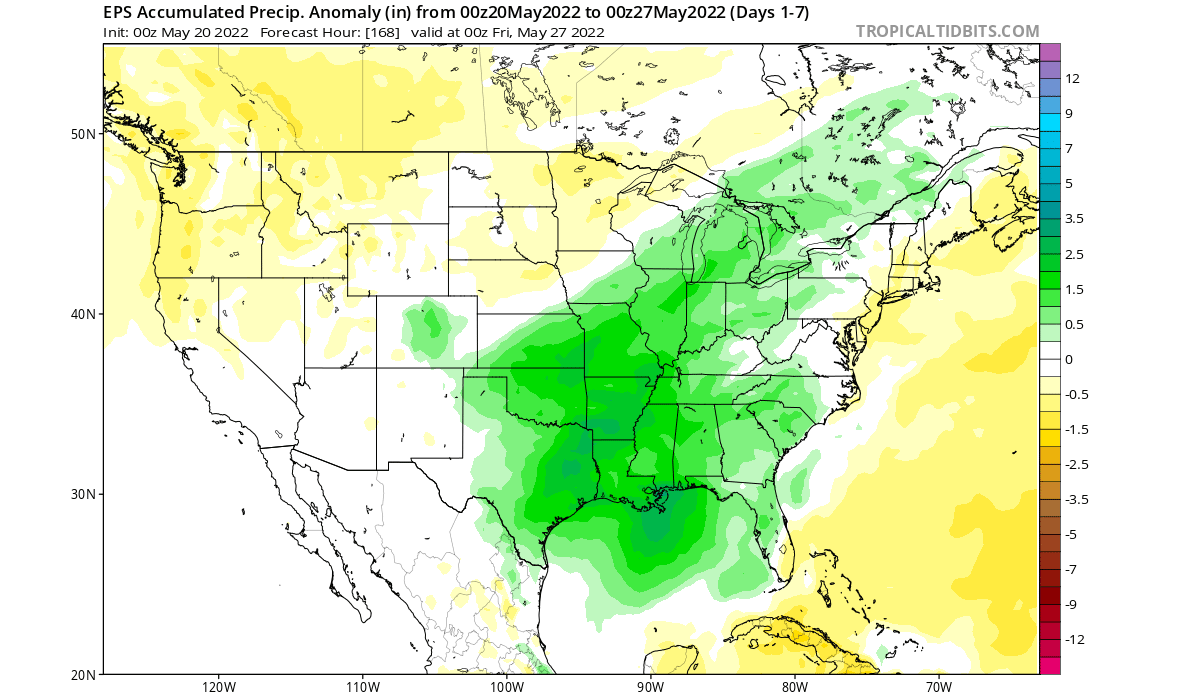 Going towards the mid-month, we see further pattern progression. Low pressure in the Arctic keeps the AO index up. It is worth noting that a strong ridge is expected to push from Siberia into the Arctic Ocean.

Over North America, we have the low-pressure over Canada. A ridge is still present just off the east coast of the United States.

The temperature forecast for this period shows the cooler airmass staying in Canada. It can be transported down to the south again if the wind flow changes. Also, notice the strong warm anomaly, crawling into the polar regions. 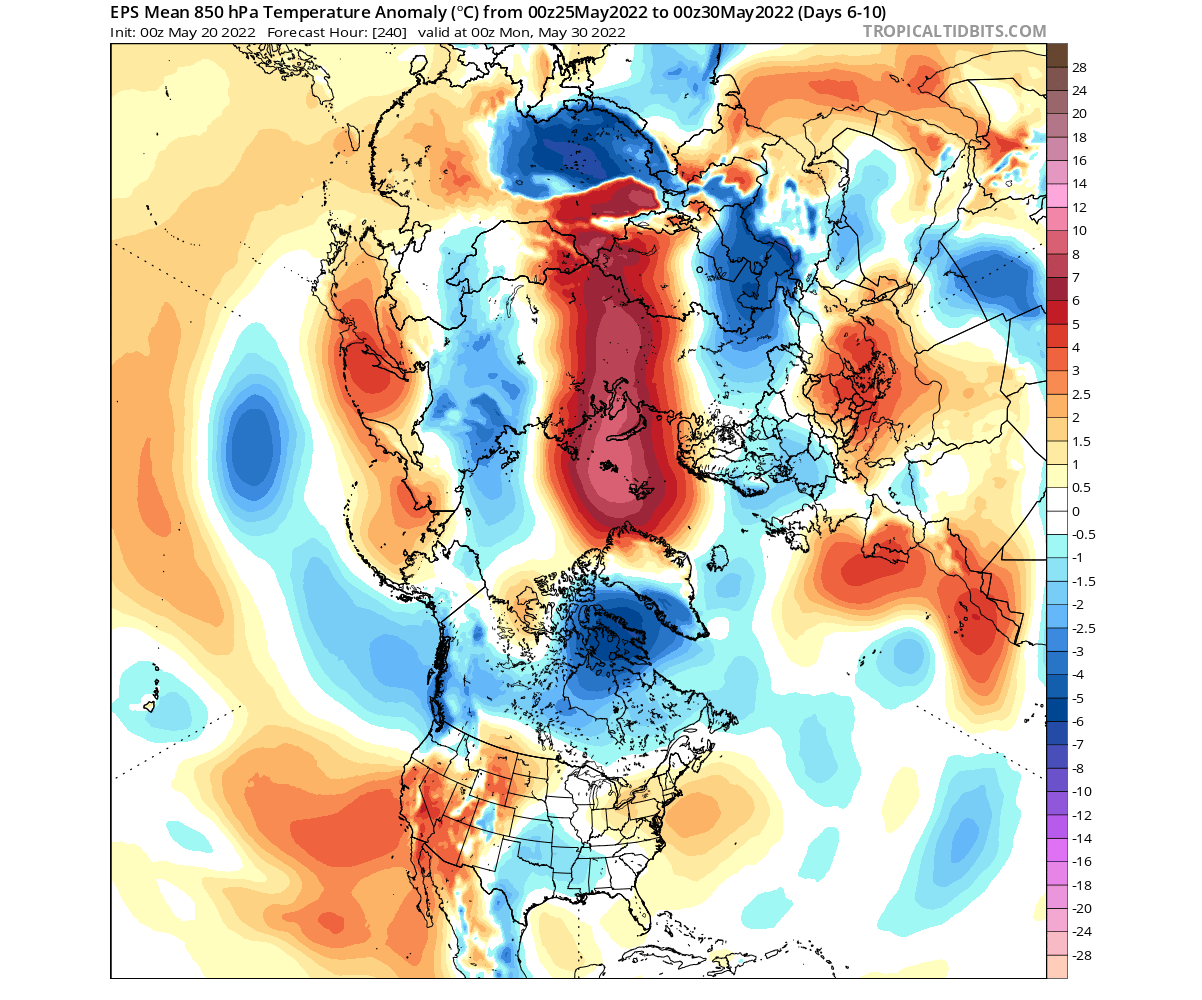 Looking closely at this period over the United States, we can see that colder than normal air will progress into the eastern parts of the United States. Temperatures start to rise over the west, as the pressure builds. 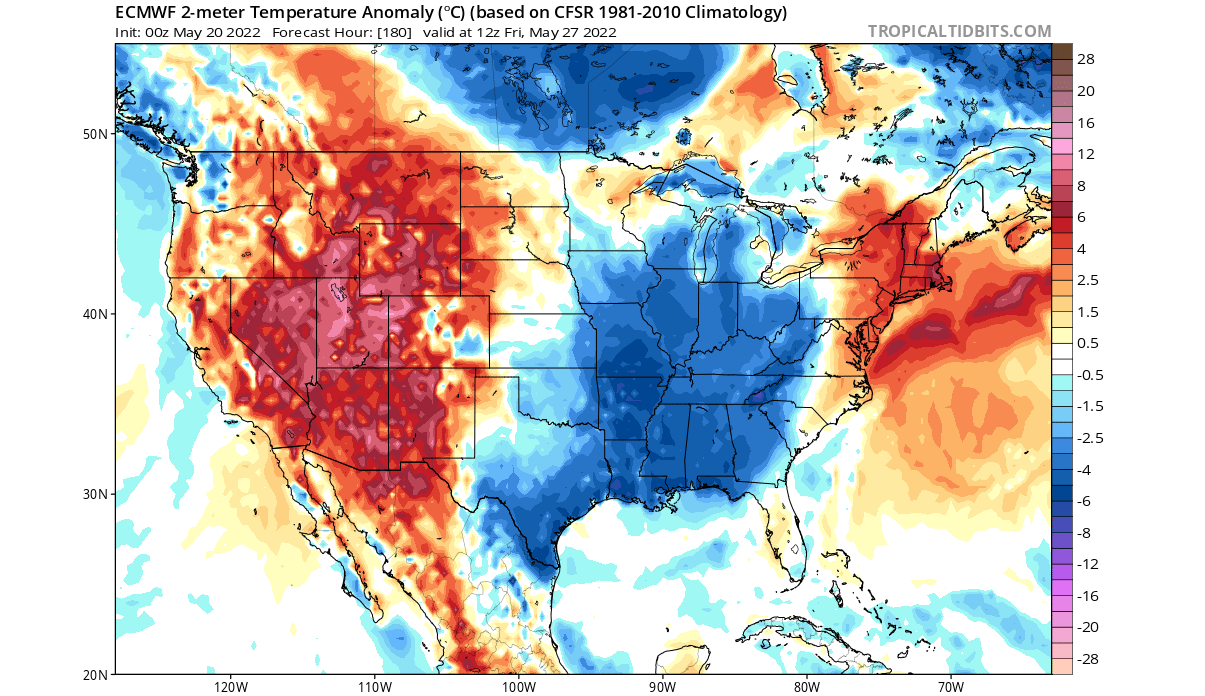 Canada can also expect to see colder temperatures, more so in the south-central regions. These cold anomalies are forecast to pull back into western Canada, while warmer temperatures will retake the eastern United States.

This is nicely captured below on the official NOAA/CPC 6-10 day weather forecast. Warmer than normal temperatures will prevail mostly over the western United States. A low-pressure system that is crossing the country will move out into the Atlantic.

We can see a break in the warm pattern in the same region as the cold anomalies that we just described. Expanding from the south-central states over the Ohio Valley and into the eastern Midwest.

This can tell us (based also on temperatures and pressure) that severe weather events are also likely.

Looking into the last days of the month, we can see a bit of a different regime, when compared to earlier in the month. We do not have one big dominant low, as it was replaced by two smaller low-pressure regions.

However, the high-pressure zones are forecast to remain stable over the eastern half of the United States and Canada. From such development, we usually tend to get this cold west/warmer pressure pattern.

Temperature anomalies below also nicely outline this pattern. Pooling of colder than normal air in western Canada, and rising temperatures in the eastern half of the United States. We can also see a strong signal for warm anomalies in the Polar circle. 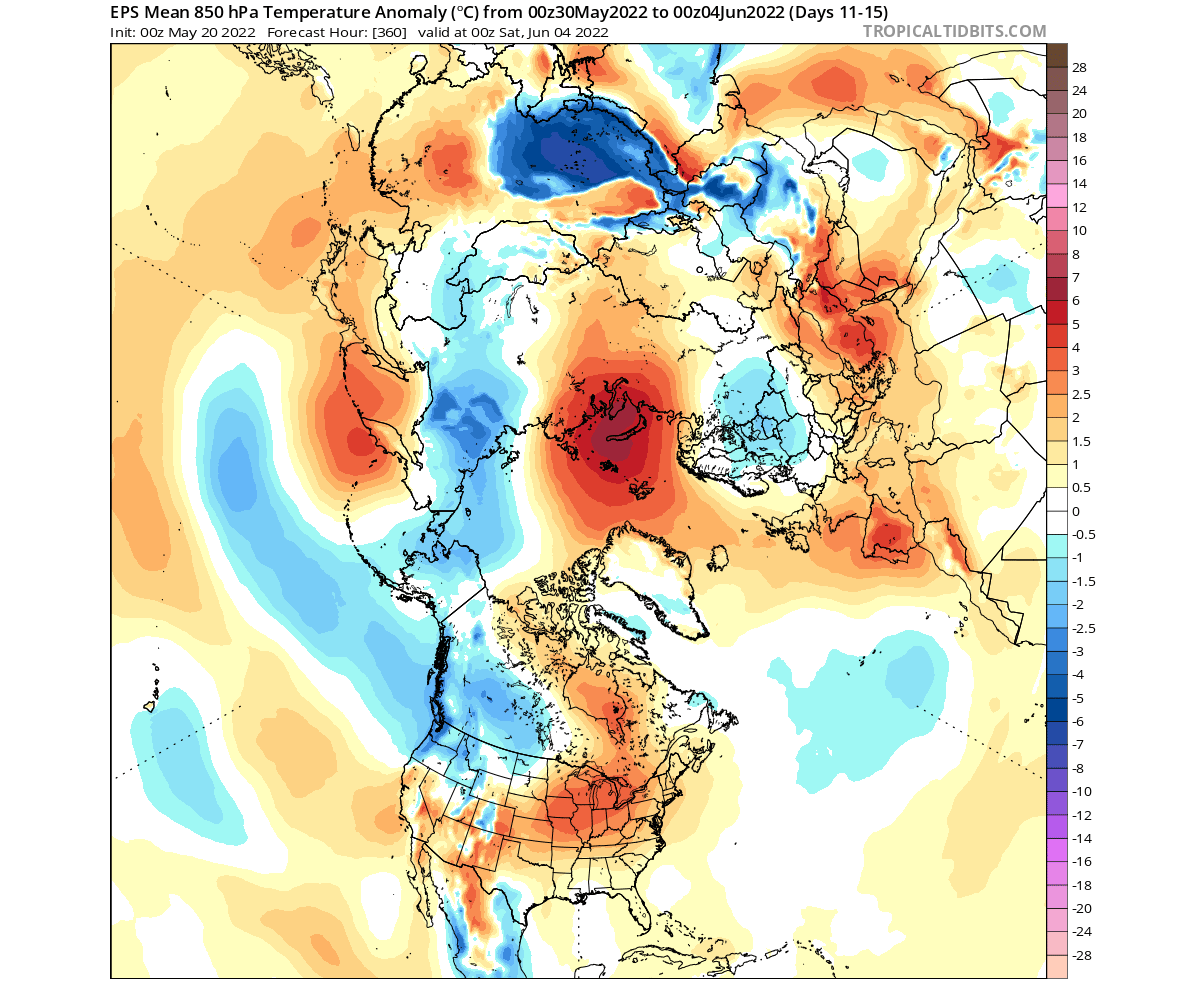 We do have to repeat, that this is further out in the forecast period, so it serves as an example of a possible scenario. The ensemble forecast supports this solution, which is the basis for weather forecasting at this range.

This is also captured below on the official NOAA/CPC 8-14 day weather forecast. Cooler temperatures will prevail mostly over the northwestern United States. Warmer weather is forecast to remain over central and eastern United States.

As we have entered a new month in this forecast period, we are going to take a look at the ECMWF extended forecast. We will look at some trends for the first half of June.

The pressure pattern forecast for late May shows a change to high pressure over western Canada. At the same time, there are signals for lower pressure over the southwestern and northeastern United States. 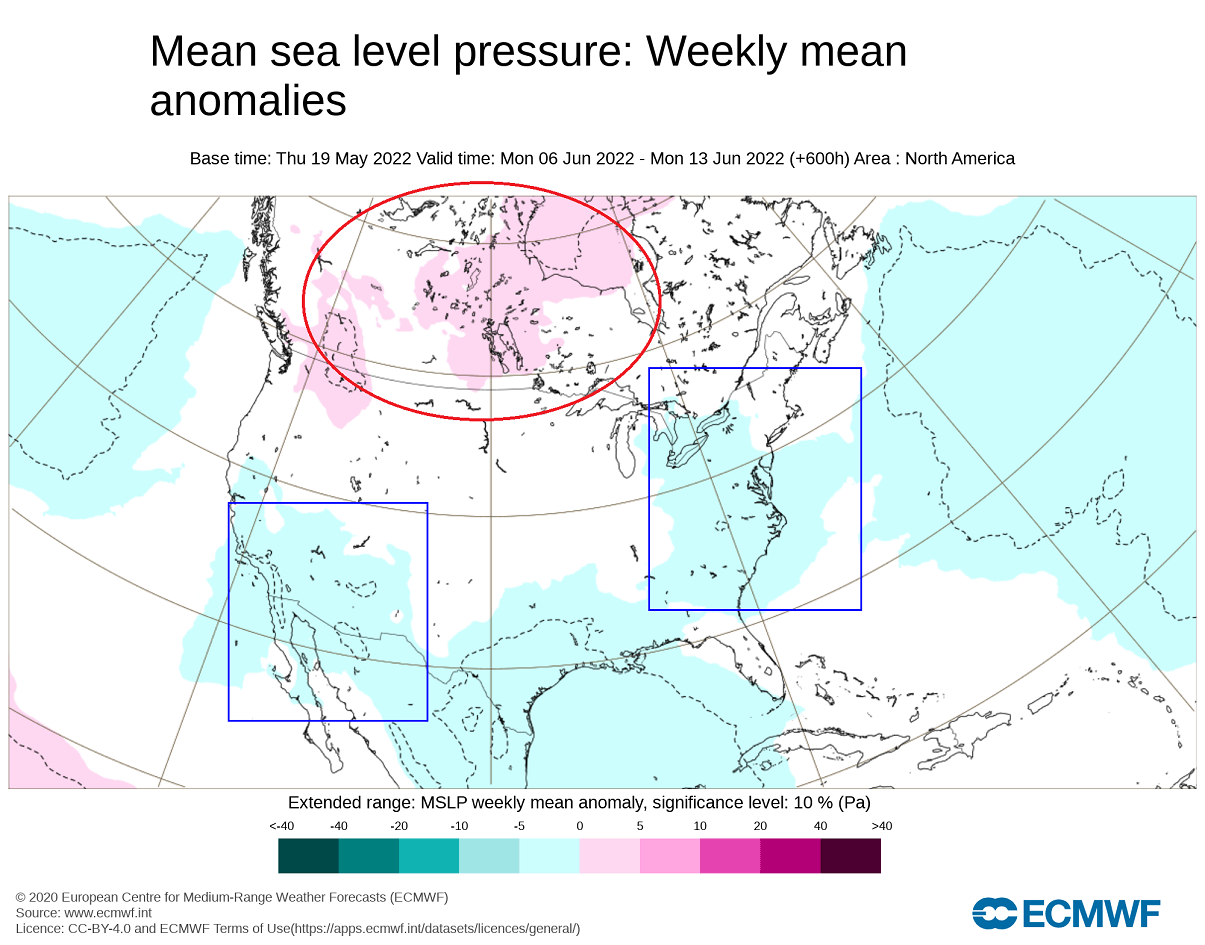 The pressure pattern forecast for mid-June shows continued high pressure in western Canada and a low-pressure area in the southwestern United States. This would promote warm southerly flow over the central United States.

Looking at the temperature forecast for this period, we see the cold anomalies remaining in western Canada. Warmer temperatures are reaching across the central United States, as expected from the pressure pattern.

June is also the first month of the meteorological Summer. For this reason, we have added a Summer weather outlook from the ECMWF long-range forecasting system.

We typically use the ECMWF, as is often referred to as the most reliable model for long-range forecasting. In reality, a lot can change in each individual year/season. But generally, the ECMWF model is at the top as far as “reliability” goes.

But no long-range/seasonal forecasting system can be called reliable. We are only forecasting trends and how the weather patterns are evolving on a large scale and over longer time periods.

The forecast period we will be focusing on is June-July-August (JJA 2022). This period covers the meteorological summer and is the peak of the warm season.

In the pressure pattern forecast from ECMWF below, we can see a persistent high-pressure system present in the North Pacific. It extends into the United States and over Canada.

The global temperature distribution follows this pattern. Over North America, we see peak warm anomalies over the central and northwestern United States. That is the warm air mass under the high-pressure anomaly. Warm anomalies also extend over much of southern and eastern Canada.

In North America, we can see the warm pooling over much of the central and western United States. The far southern and southeastern United States however does feature a weaker anomaly zone, similar to the historical La Nina summer patterns. 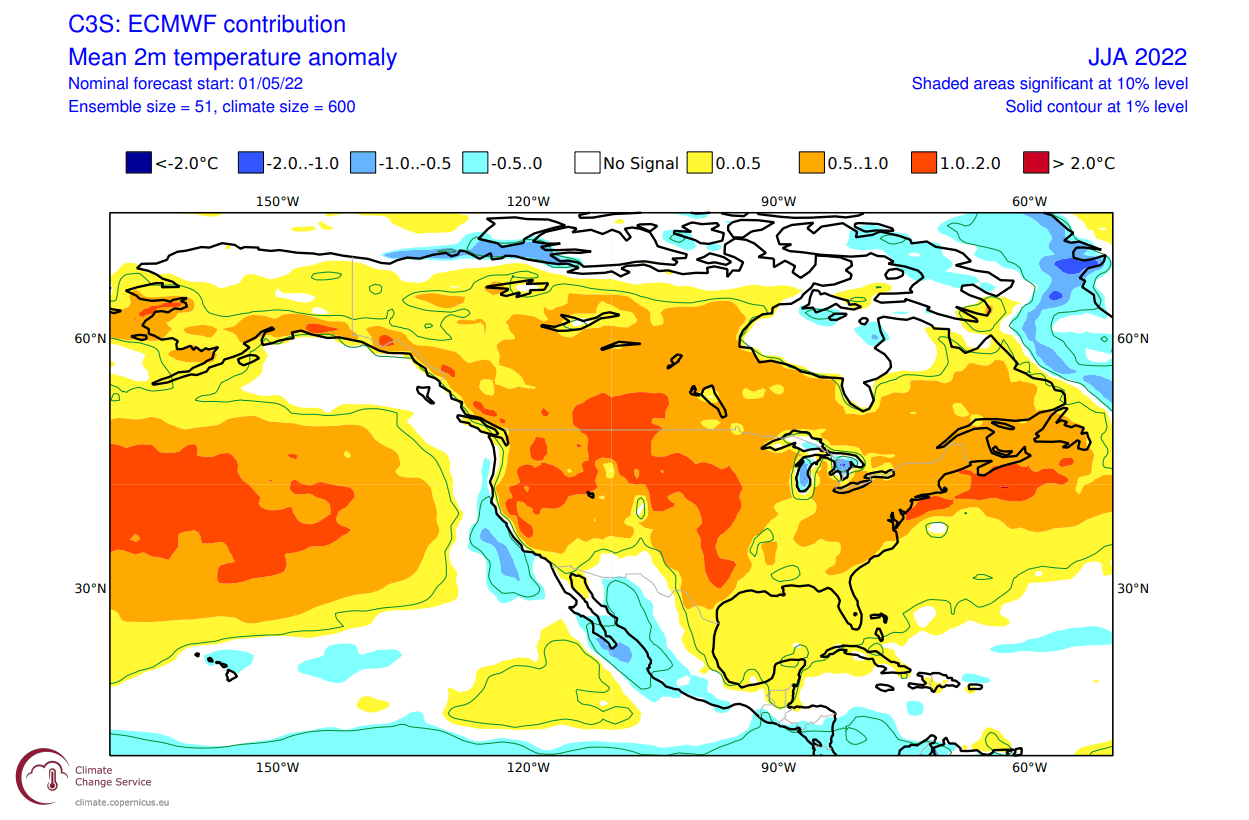 Warm anomalies are also forecast over much of central and eastern Canada, and also the northeastern United States. That region is under the influence of the secondary high-pressure system over the area.

Overall, hot and dry summer is expected across the south-central United States in this latest outlook. Over the southwest and east, more storms are expected, as the forecast calls for higher temperatures together with normal to above-normal precipitation.

Looking at the NOAA official Summer temperature outlook, most of the United States is warmer than hotter. The core warm anomalies are focused on the western half of the United States. Another warm zone is in the northeast, under the secondary high-pressure zone.

The official Summer precipitation forecast is quite similar to the model forecast. We have an equal-to-higher probability for more precipitation in the eastern United States and over parts of the southwest. But most of the northwestern and central United States is forecast to have a drier summer season.

We will release regular weekly and monthly updates on weather development, so make sure to bookmark our page, and also, if you have seen this article in the Google App (Discover) feed, click the like button (♥) there to see more of our forecasts and latest articles on weather and nature in general.