An unseasonably intense winter storm is expected to develop all facets of severe weather across a large portion of the United States this week. Heavy snow with severe winds and blizzard conditions will blast the north and northwest, as a deep surface low-pressure system ejects off the Rockies. The system will pull very warm and moist air far north, resulting in the most robust multi-day severe thunderstorm outbreak this spring, from the southern Plains and Mississippi Valley as tornado season significantly ramps up.

A potentially very busy severe thunderstorm and tornado threat period ahead has a background in the jet stream aloft, rounding a deep upper low that is plunging far south into the western Contiguous U.S., developing a low-pressure system at the surface. The typical result is the pulling of a very warm and moist air mass from the Gulf of Mexico into the Plains, but also pulling much colder air from Canada in its wake.

This week’s system will be a rather slow-moving but unusually intense winter storm, supporting both significant severe weather and tornadoes for the south, while massive snowstorms, winter cold, and blizzards with heavy snow will blast the north. Thanks to the most amplified jet-stream pattern this spring season. 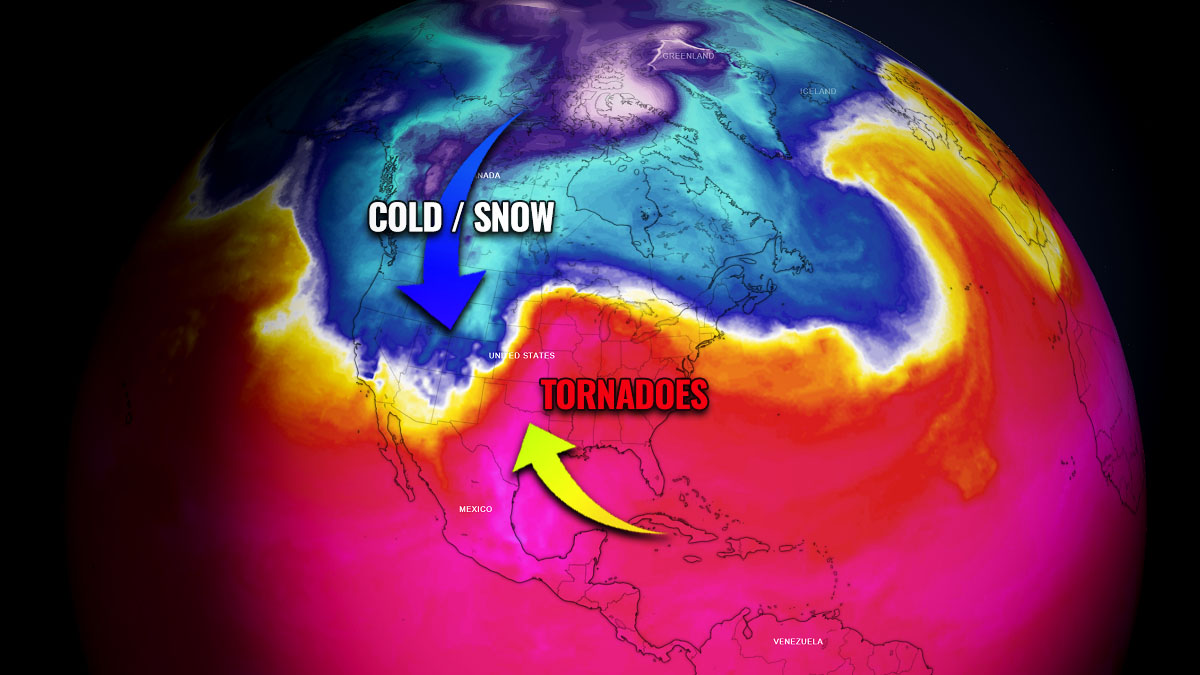 The effects of the upcoming late-season winter storm will be very large, covering most of the central U.S., from the deep southern states far north across the Midwest to the International border. The developing weather pattern is forecast to bring a very powerful surface low, traveling off the Rockies to the Great Plains towards the Lakes.

The jet stream winds across North America, spreading across the United States, will be very intense as the pattern bring the big temperature and the pressure difference across the continent. Wind speed of more than 150 knots through mid-week, making the air travelers from west to east make their way quite a lot earlier than normal. 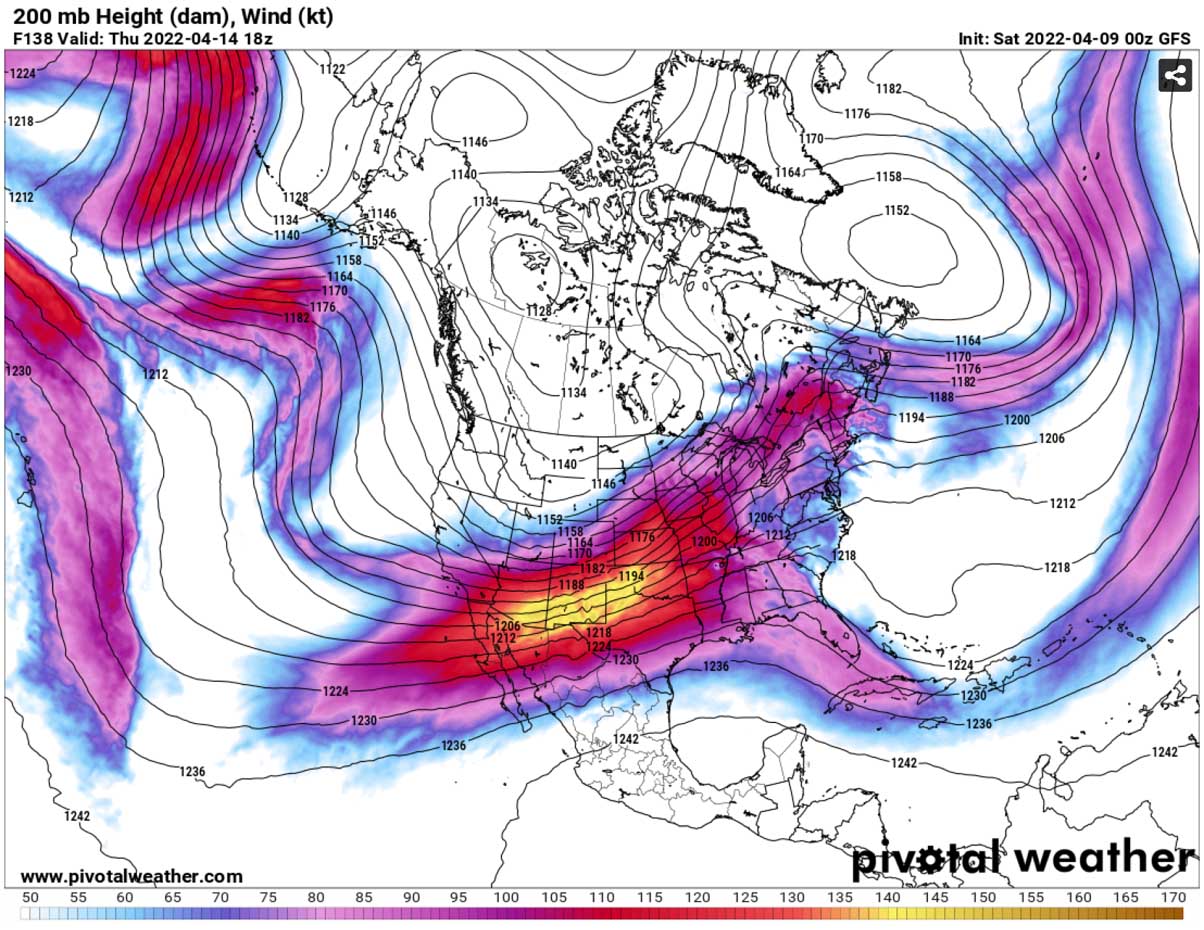 The confidence is growing large-scale and multi-day severe weather outbreak will develop from the southern Great Plains after Monday, moving east through Tuesday and Wednesday across the Mississippi Valley to the Southeast U.S. The tornado season this spring has significantly ramped up in the recent weeks, with March bringing a much higher than a normal number of tornadoes across the country.

While the tornado activity has been slightly below normal until the beginning of March, it has significantly increased through the recent weeks with numerous days of severe weather. Mostly across the south, from Texas across the lower Mississippi Valley to Southeast U.S., which is quite typical for the early spring tornado season.

When a winter storm becomes so large and the low-pressure systems deepen a lot, the pull of much colder weather from Canada into the United States is stronger than what typically occurs during the spring season. Robust winter weather will bring cold season memories back for the north and northwestern states, forecast to experience significant amounts of snow, and blizzard conditions.

Snowfall will be heavy at times, while the large pressure differences will support the development of strong to severe winds in the low’s wake. Winds will be gusty across the West U.S. up to the Northern High Plains, threatening those traveling in these states. The highest amounts of snow are forecast from Oregon to Montana into Dakotas, where very heavy snow and significant accumulations are forecast for North Dakota.

The video animation above is showing a quick overview of the pattern and surface low development across the nation. The system starts intensifying on Monday across the northwest, with an intense winter storm spreading across the Great Plains and Midwest from Tuesday through Wednesday. A combination of severe storms and heavy snow farther north will affect millions along the frontal system’s track.

WINTER STORM WITH MAJOR SNOW AND BLIZZARD ACROSS THE NORTHERN U.S.

As we discussed earlier, the unseasonably deep and intense upper low emerges in the United States, starting Monday. This normally leads to the development of typical cold season weather on the colder side of the winter storm, while storms develop on the warmer side of this surface low-pressure system. The upper-level weather pattern will continue strengthening through mid-week. 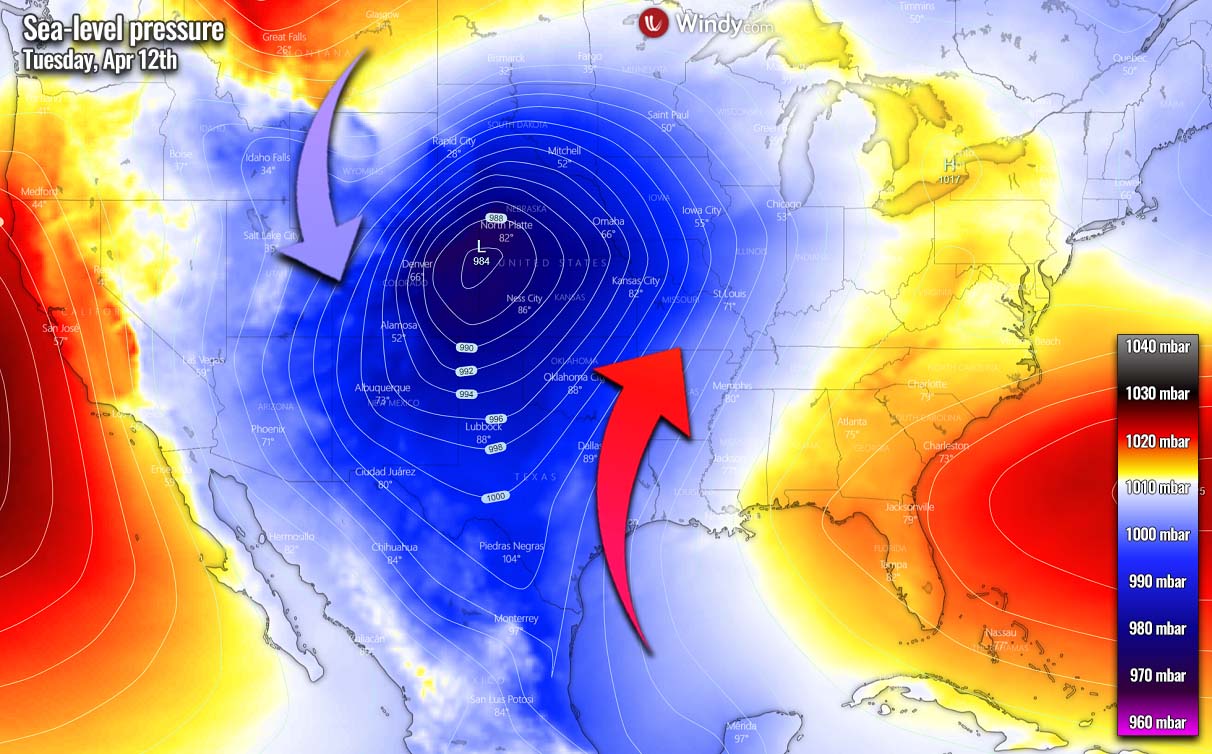 The surface pressure considerably deepens as cold upper levels dig south towards Tuesday as we can see on the chart above. It becomes very large, thanks to a battle of very warm air from the south and much colder air plunging south from Canada.

The following chart reveals the general pattern across the United States, with a very deep upper-level low, rounded by a strong pressure gradient to its south. That’s the region where the powerful jet stream winds will be grazing the sky. 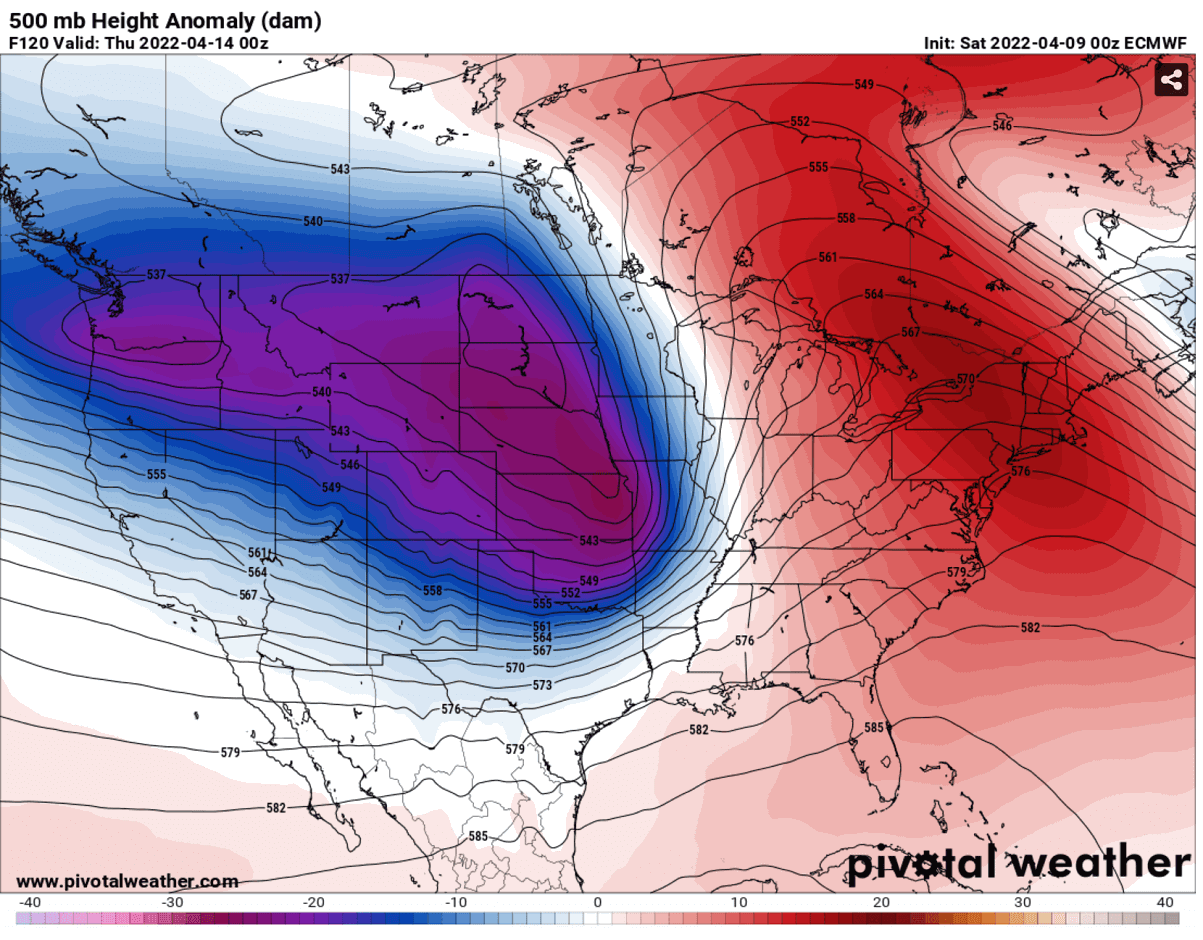 Snow will begin for the northwestern states on Sunday night as conditions begin worsening with the deepening low from the Pacific Northwest towards the western U.S. Snowfall will become heavier into Monday as the system strengthens and moves towards the Rockies. Heavy snow is forecast from the West towards the Northern High Plains by late Monday into Tuesday.

As also combined with increasing winds, blowing snow and blizzard conditions will develop in these areas. Significantly reduced visibility will be affecting travels along the interstates I-80 and I-90 on both Monday and especially Tuesday. With the surface low continuing across the Midwest on Tuesday, heavy snow will also develop farther south towards the central High Plains, from Wyoming to Colorado Rockies.

Very heavy snowfall will then gradually develop along the northern side of the winter storm as it tracks into the Upper Midwest and Great Lakes towards Wednesday. A swath of particularly heavy and abundant snow will develop from eastern Montana into North Dakota from late Tuesday into Wednesday. Winds will be increasing with time, worsening conditions with blowing snow and developing blizzards and near-zero visibility.

Attached below is the sequence of the frontal system progress from Tuesday through Wednesday. Isobars, lines connecting the same pressure levels, are very tight, hinting at the winds being particularly intense across most of the northern Plains. Snow and blizzard will also reach parts of Minnesota and the northwestern Great Lakes later on Wednesday as well, again coming with strong winds and blowing snow. 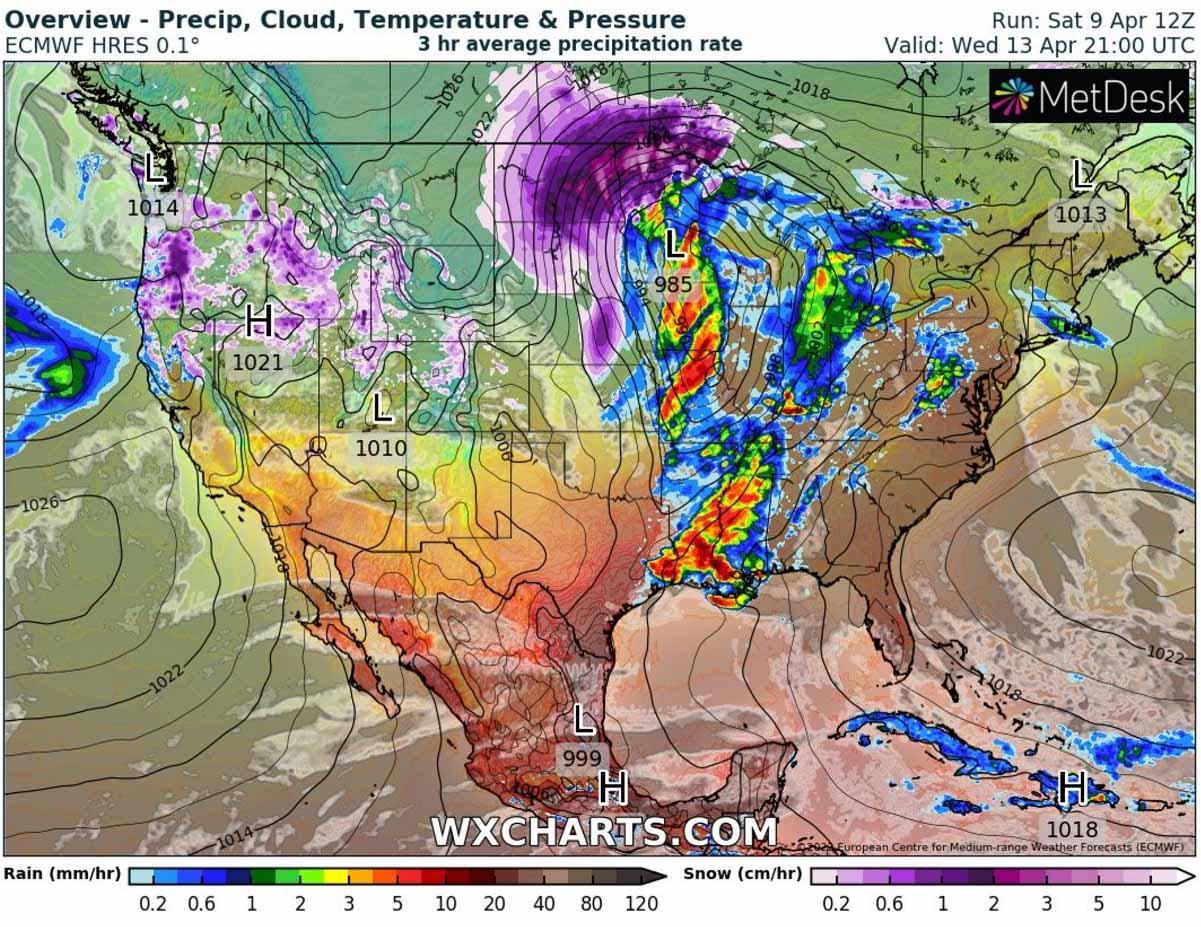 A lot of snow is forecast to accumulate from late Monday through Wednesday from the northern High Plains to Upper Midwest, with huge snowdrifts, whiteout conditions, and unpassable roads due to persistent strong winds and heavy snowfall. The highest amounts are likely from eastern Montana across North Dakota and northern Minnesota to southern Manitoba and western Ontario.

Parts of North Dakota could end up with up to more than a foot of snow by Wednesday night, possibly even close to 2 feet of snow in some areas where best conditions will meet together. The northern side of the slow-moving intense winter storm usually brings the near-ideal conditions for very heavy snowfall and highest ground accumulations.

Very high amounts of snow are also forecast across the Cascades and Sierra mountain ranges, as it is rather typical in weather patterns forecast this week. Persistent strong and moist winds from the North Pacific result in heavy snow when air masses are advecting across the mountain chain. Orographic snowfall develops that may last for several days and both ranges will likely receive more than 2 feet of snow through mid-week.

MULTI-DAY SEVERE THUNDERSTORM OUTBREAK WITH TORNADOES FOR THE SOUTH

The other part of this week’s winter storm will be the potential for a multi-day severe thunderstorm outbreak across the southern U.S. While these systems are quite typical during the spring season, the winter storm of a such scale is not occurring so often.

The first round of severe thunderstorms will likely develop across Texas, Oklahoma, and Arkansas to southern Missouri on Monday afternoon and evening hours. Storms could bring large hail, even very large in northeastern Texas, severe winds, and a few tornadoes.

The day after, on Tuesday, much more robust severe thunderstorm conditions are forecast as the surface low begins strengthening and becomes pretty deep traveling across the Midwest. This will ignite a major return of significantly more moist and warmer air develops from the Gulf of Mexico. As a result, severe thunderstorms will become more widespread from Tuesday afternoon into Wednesday.

Thunderstorms with potential for tornadoes, potentially even strong ones, severe damaging winds, and large to very hail with local flooding will be possible from the southern Plains into the Midwest on Tuesday.

Areas across eastern Oklahoma, and eastern Kansas into western Missouri will be in the highest threat of the most robust storms. Severe storms will be gradually spreading towards Mississippi Valley through Tuesday night as the front advances east.

On Wednesday, the same areas could potentially be affected again as the parent low-pressure system will be just slowly moving across the Midwest towards the Great Lakes. This will put areas from the eastern portions of the south-central Great Plains across the Midwest to southern Ohio and Missisippi Valley into the highest severe weather potential.

The rapid return of higher low-level moisture northward ahead of the surface low will develop to the east of a dryline across parts of the southern and central Plains into the mid-Mississippi Valley. The environment will become strongly unstable under a very powerful jet stream aloft, with severe supercells as primary storm modes.

The most robust severe thunderstorms, bringing large hail, severe winds, and tornadoes (potentially even strong again) from eastern Oklahoma and Texas into Arkansas, southern Missouri, Louisiana, Mississippi, and western Tennessee from Wednesday afternoon into the night hours. Local flooding will be possible as the likely large complex of storms will be rather slowly advancing east. 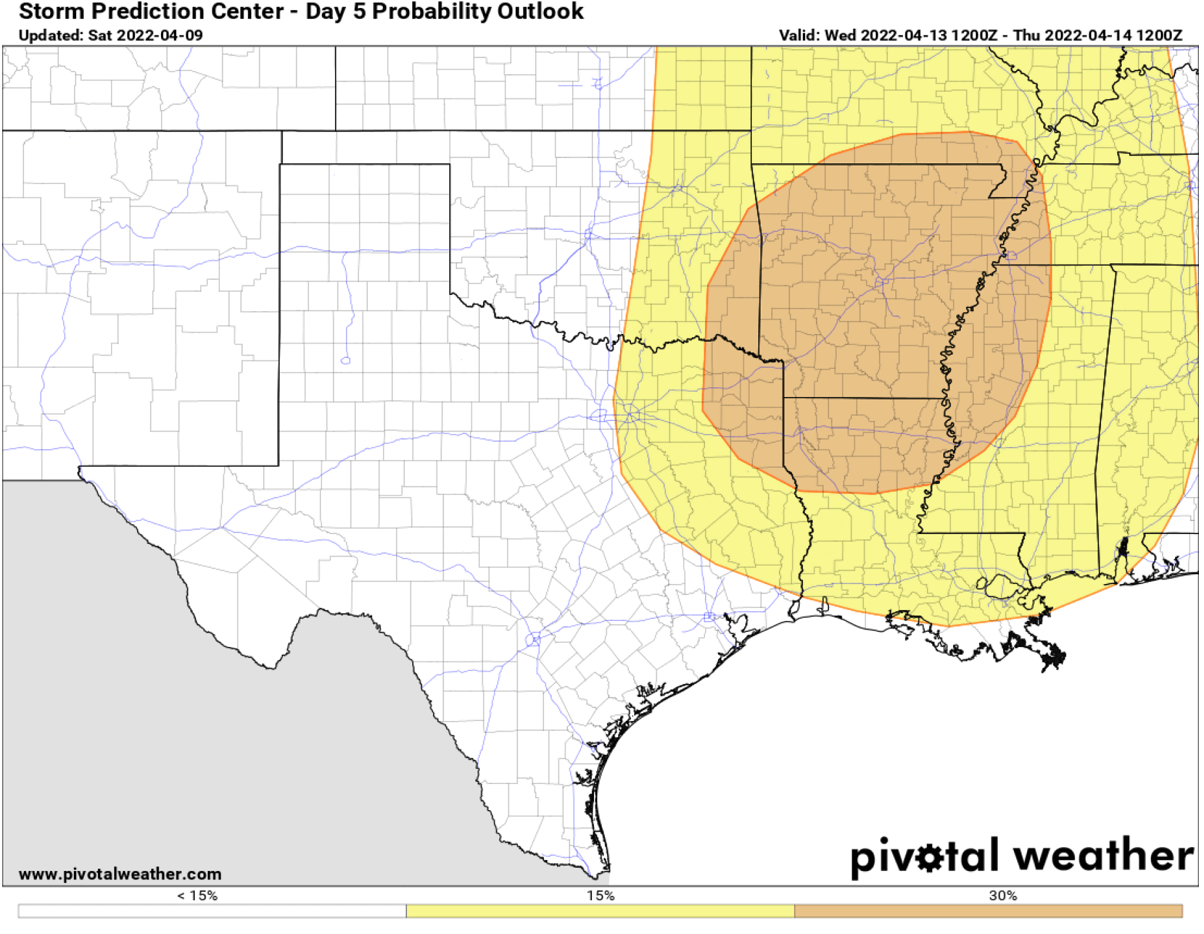 As the activity reaches the Southeast United States from Wednesday night into Thursday, the pretty well-soaked grounds will quickly enhance the threat of flash floods. Storms could bring additional 3-5 inches of rain by Thursday night from Arkansas and Louisiana across Mississippi Valley to Ohio Valley, also across parts of Alabama.

Besides some threats of severe winds and hail, Thursday’s highest threat will be flooding. 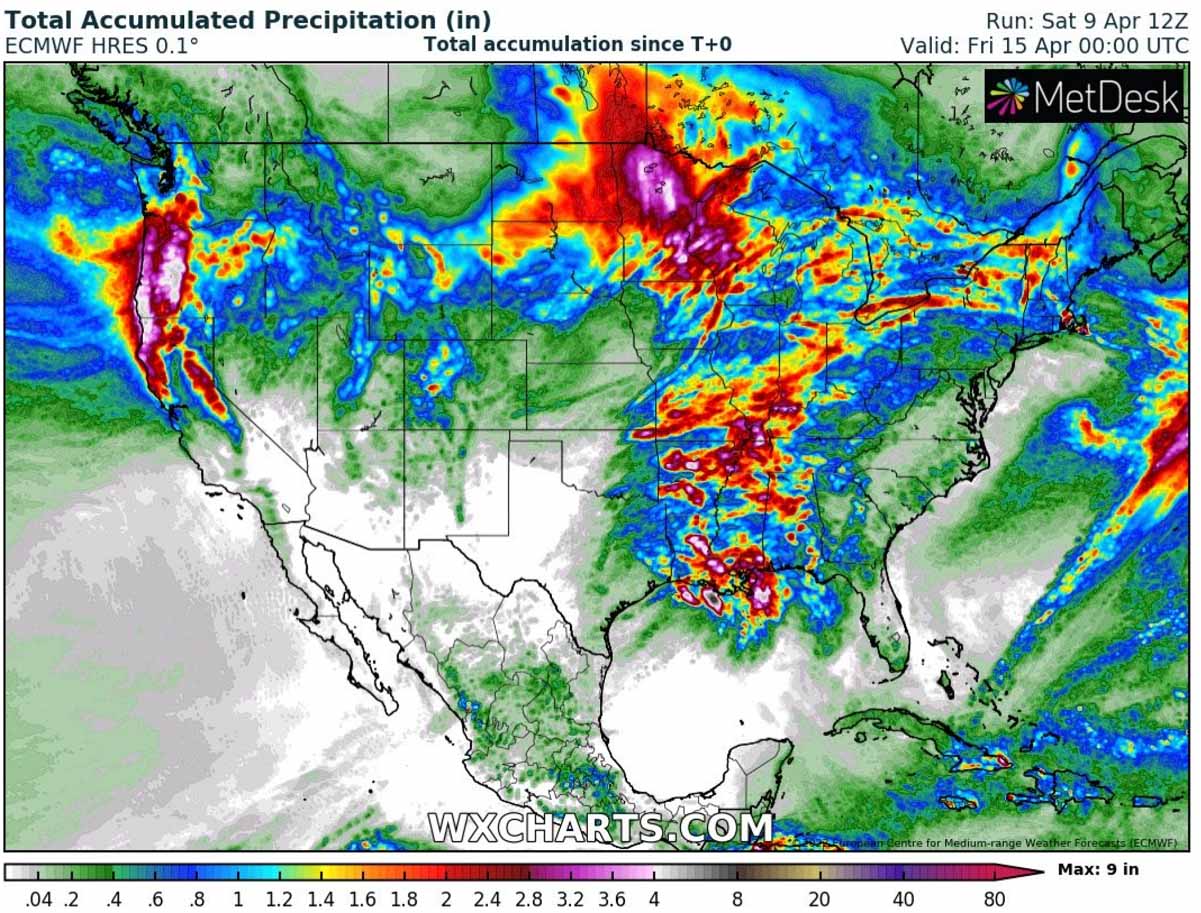 MORE COLD WEATHER FOLLOWS FOR THE NORTH ON THURSDAY

Once the deep surface low-pressure system finally ejects the central United States on Thursday, it remains very intense. It will be parked over Upper Midwest and southern Canada with its central pressure in the upper 970s. Just by judging the isobars, winds will remain very strong across the whole northern and also central U.S.

Strong winds and intense surface low under a still very deep upper core will pull even colder air from Canadian prairies into the northern states. The most intense cold is forecast to spread into Montana, North and South Dakota, and Minnesota. Also extending into parts of Wyoming, Nebraska, Iowa, and Wisconsin on Thursday into Friday.

A return of the cold season weather should gradually vanish towards the next weekend.

As we can see, this cold will remain tied up to the northern Plains and Upper Midwest only, so the Great Plains and areas further south will be in very warm and hot conditions once the severe weather settles down into late weekdays.

Images used in this article were provided by Windy, Wxcharts and Pivotalweather.

*April Forecast* Weather patterns are now adjusting to the Polar Vortex collapse, creating a weak jet stream as we head deeper into Spring