Europe is ending the first month of meteorological spring season 2022 with a massive cold wave this week, forecast to extend into early April. A widespread cold with snow and potential morning frosts will overspread most of the continent. First across western Europe through Friday, followed by central Europe and also the south Mediterranean over the weekend.

The winter season 2021/2022 was rather mild across many parts of Europe, lacking snow and any particularly strong cold outbreaks. The reason behind was also the pretty intense Polar Vortex aloft and the decaying La Nina global circulation. The vortex finally weakened and collapsed a few weeks ago, but the cold weather didn’t say the last word just yet.

This week, the general weather pattern over the North Atlantic and Europe has flipped to a progressive northerly circulation. A strong upper High has built up over the Atlantic and Arctic region, allowing a deep trough to form on its eastern side, turning south towards Europe. It is releasing a lot of cold air, which is not welcomed in the spring season at all. 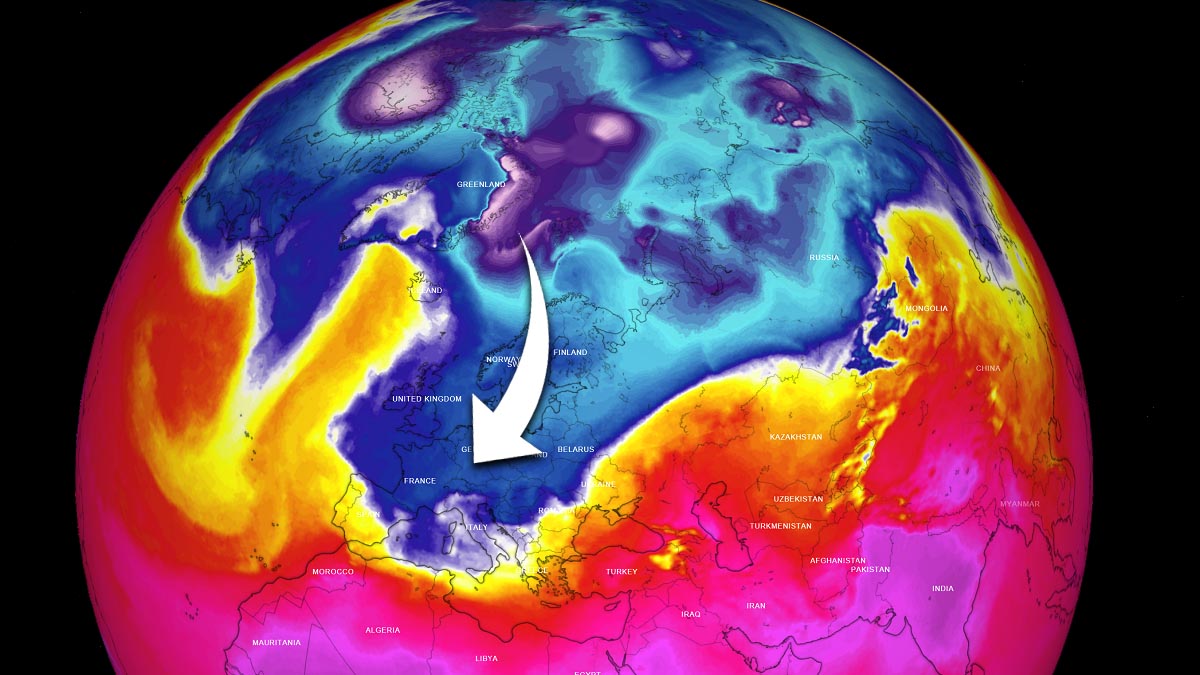 The blocking pattern will remain over the Atlantic for several days, with the trough to its east literally locked in over the central and southern parts of the European continent. Normally this brings unsettled weather conditions as surface depression forms over the Mediterranean. Finally, a much-needed rain is forecast for central and southern parts, which has been lacking a lot since February. Even longer in some areas.

The deepening pressure in the Mediterranean region has also contributed to a significant increase in the Saharan dust advection from the Algerian deserts towards Europe on Wednesday, reaching far north across central Europe and the Balkans, even partly into western Europe. Dust cloud particles accumulations have been reported from many areas. 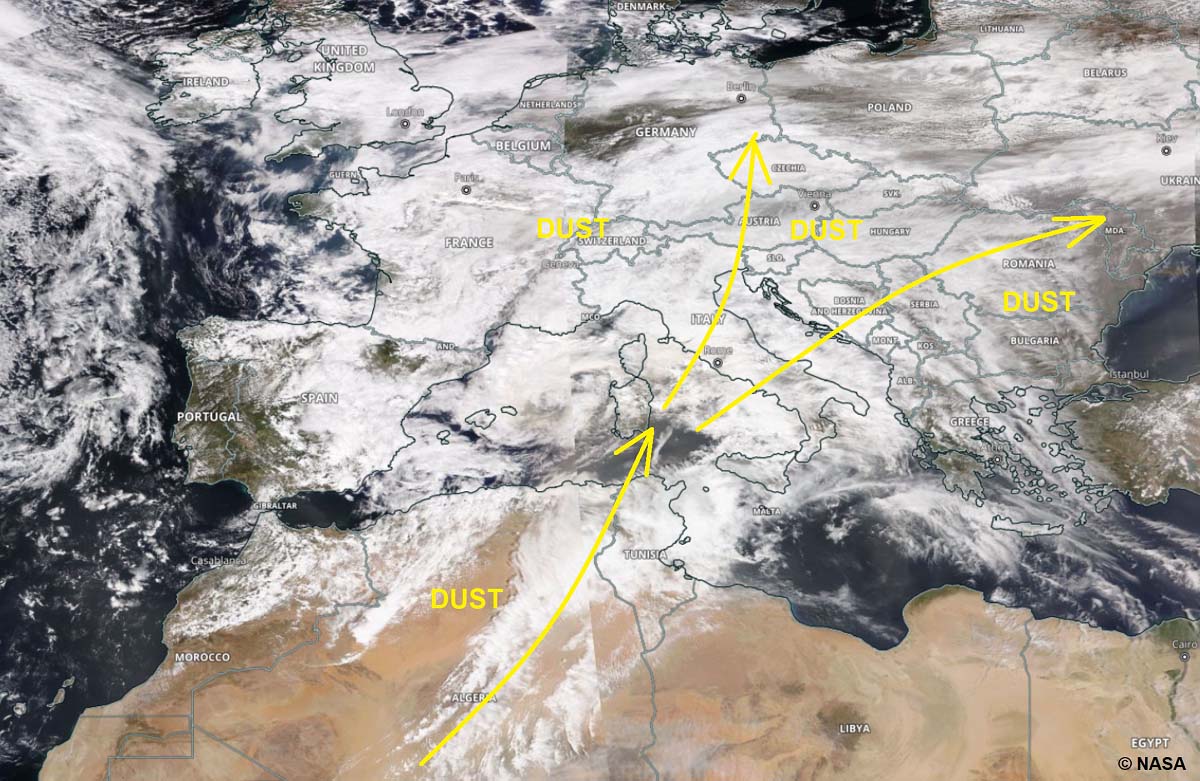 However, the further strengthening of the trough will also intensify the cold weather, so temperatures will be much lower in the coming days. Close to around 15 °C below normal in the lowest levels from Friday, April Fool’s Day, through the weekend.

This will also trigger snowfall in parts of western and central Europe where the interaction of moist air mass from the south with the much colder air from the north will meet.

Accumulated snow is forecast from eastern France across Benelux to south-central Germany, to Czechia, southern Poland northern Ukraine, also into parts of northern Balkans and indeed the Alps.

Days will be much colder than the average from Thursday through Monday, particularly across western and central Europe. Where skies will be clear, very cold mornings with potential frosts could follow, particularly over the weekend and on Monday morning. This could be vulnerable to blossoming fruit trees and early agriculture in many areas.

A LARGE BLOCKING HIGH OVER THE ATLANTIC, DEEP TROUGH WITH COLD OVER EUROPE AS SPRING SEASON ENTERS APRIL

Starting this Thursday, the establishing weather pattern over Europe leads to a rather textbook intrusion of the cold northerlies towards the European continent. The upper High has been gradually building up over the North Atlantic this week and is now expanding towards the north over Greenland.

This allows the cold to turn south on its eastern side, leading to a development of a large surface depression over central Europe and the Mediterranean. 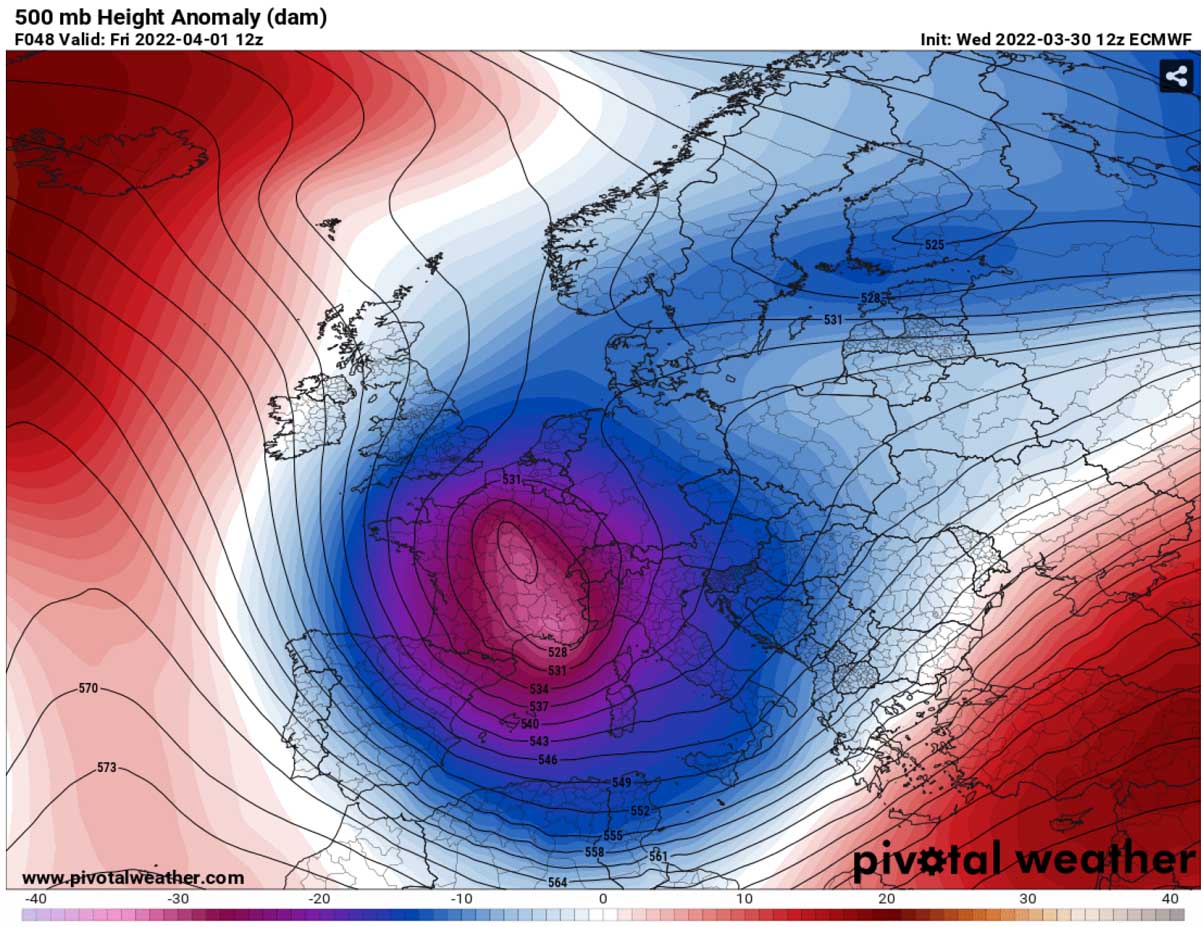 As we could quickly see from the next temperature chart below, the tight pressure gradient between the High and the Low drags the cold across Scandinavia towards western Europe first on Thursday, spreading further south into southwestern Europe and Iberia on Friday.

The surface cyclone will be quite large on Thursday night into Friday, also gradually expanding into the Balkan peninsula. On its front end, a strong warm advection will develop towards the north and east, spreading over southern Balkans, Turkey, and the Black Sea region. 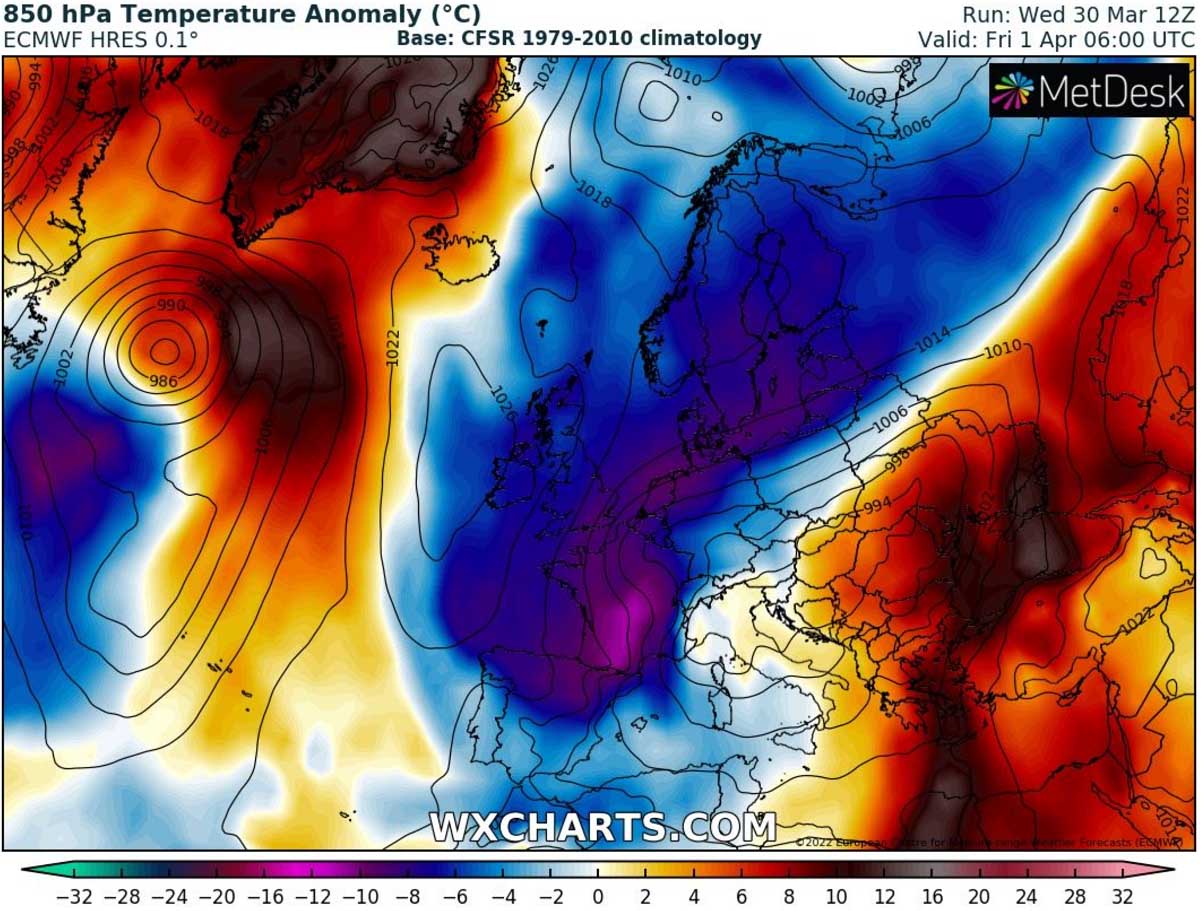 Precipitation will develop with the surface low, as rainfall south and east of the Alps from Thursday midday into early Friday. But rain will turn to snow on the northern side of the Alps as cold advances south.

Although the snowfall should not be particularly heavy, accumulating snow is forecast in the wake of the surface low across eastern France, Benelux, and Germany. Also farther east across part of Czechia into southern Poland along the southward moving cold front through Friday night. 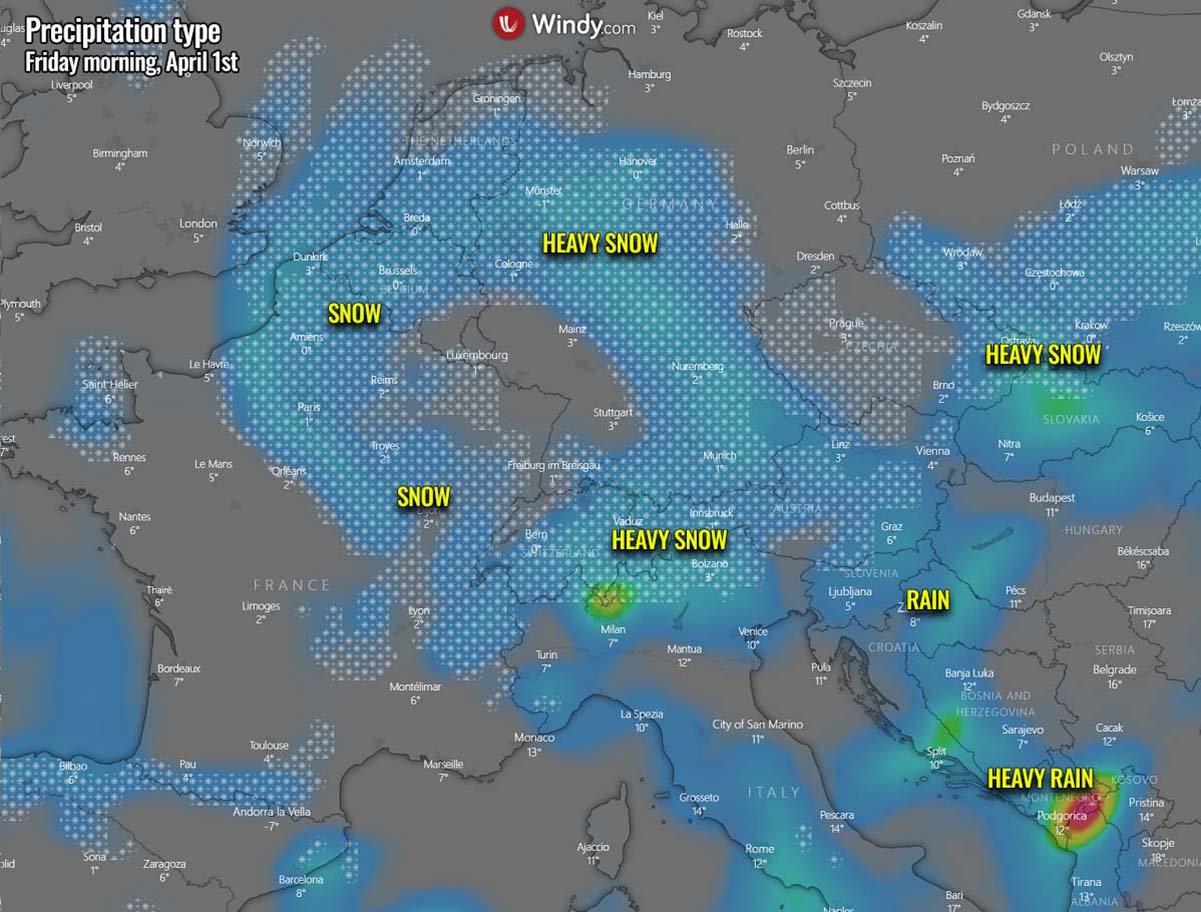 As the Atlantic surface high-pressure system will move south and closer to western Europe on Friday, it will allow the deep trough and cold over Europe to advance farther south and east. Spreading across central Europe and also into the Mediterranean Sea for the weekend.

Temperatures in the lowest levels of the atmosphere will be very cold for the spring season, even more than 15 °C below normal in some areas. Particularly over France, Benelux, Germany, Czechia, Slovakia, and Poland.

The cold over the continent should remain until Monday, as the strong High on the west remains almost at the same position until Sunday night, and so will the surface depression farther south over the Mediterranean.

QUITE SOME SNOW AROUND THE ALPS, MAJOR RAINFALL FOR APENNINES AND WESTERN BALKANS

As mentioned earlier, the position of the surface high-pressure system spread across the Atlantic, western, and also northern Europe, allowing the north-northeasterly to drag unseasonably cold air mass far south into central Europe and into the Mediterranean. This helps the large surface cyclone to maintain also into the weekend. 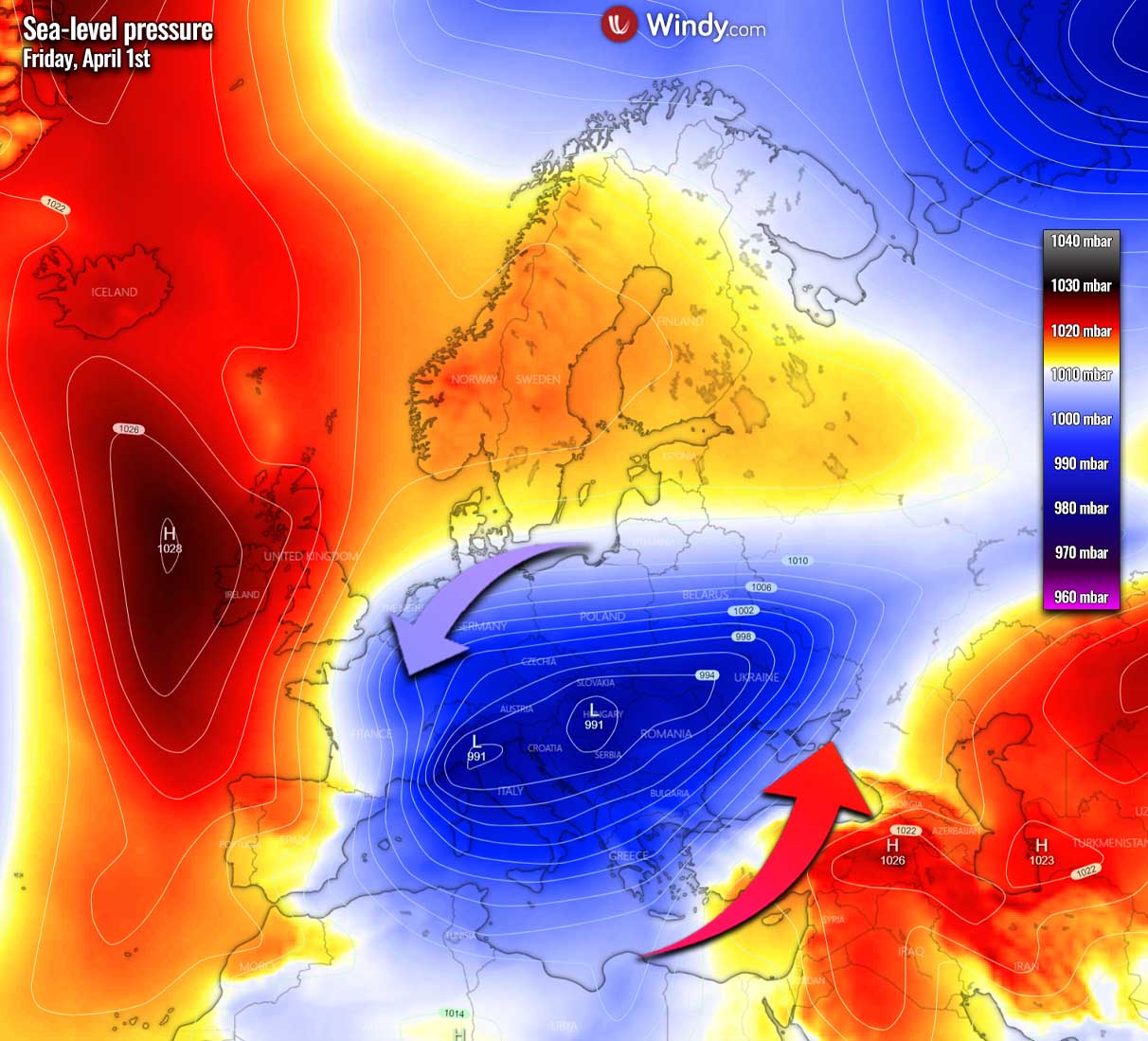 The low actually covers a large part of central and southern Europe, thanks to a broad upper core low sitting above it. Being completely locked in with the blocking pattern to its west and north.

Precipitation will be quite heavy at times, and also excessive due to moist west-southwesterly winds. When this occurs, the western side of the Apennines along the Italian peninsula and along the Dynaric mountain range in the western Balkans receives strong orographic precipitation. It will be persistent for about 72 hours.

Locally 200-500 mm of rain seems quite reasonable by Sunday morning along the western Balkans countries. 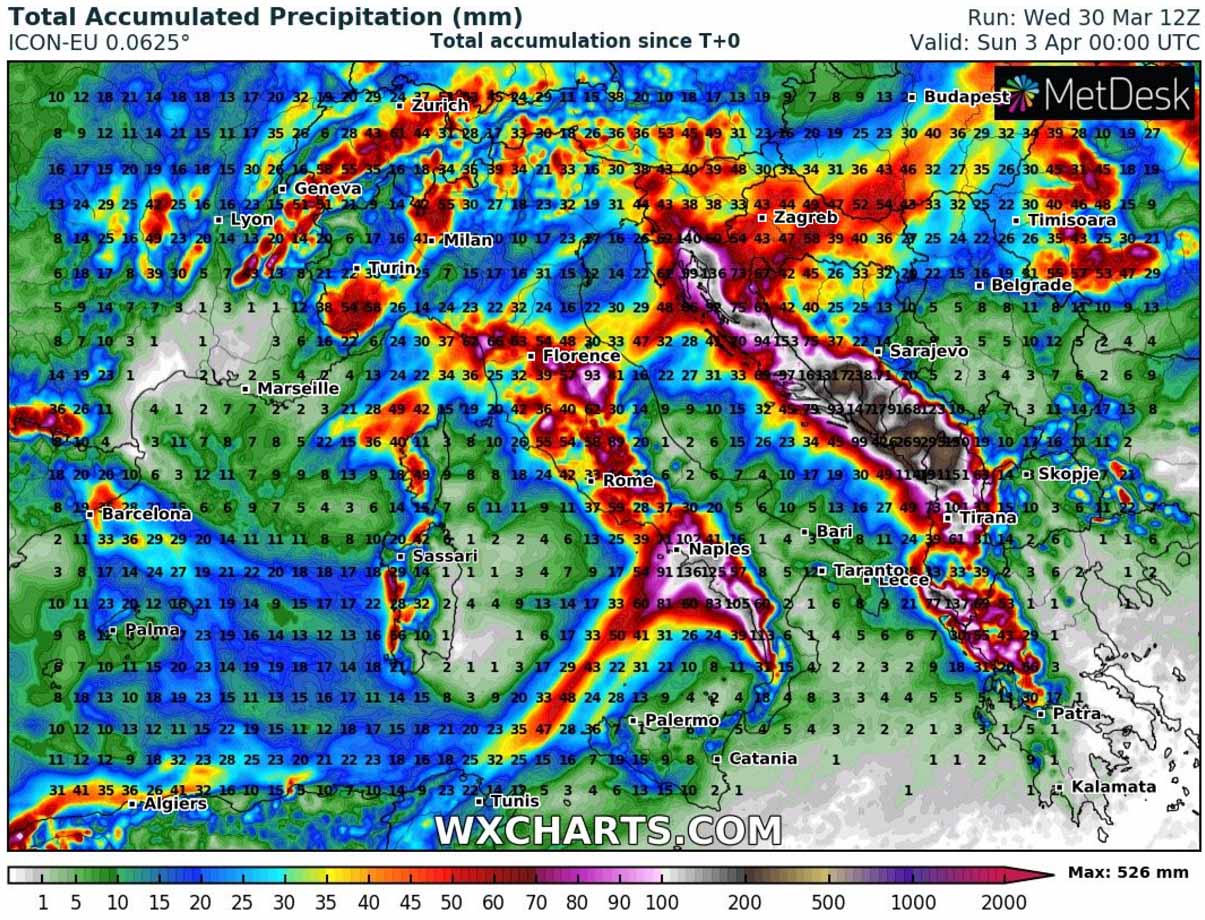 On the northern side of the low, the cold in the lowest levels will already reach the ground, so rain will turn to snow also in the lowlands around the Alps. As well as across parts of northern Balkans, as far south as Slovenia.

Snow accumulations are forecast to be quite high over the Alps, but a lot of snow could also develop across the higher Apennines once the stronger cold arrives on Saturday. Potentially a lot of snow also in parts of central Germany at higher elevations. 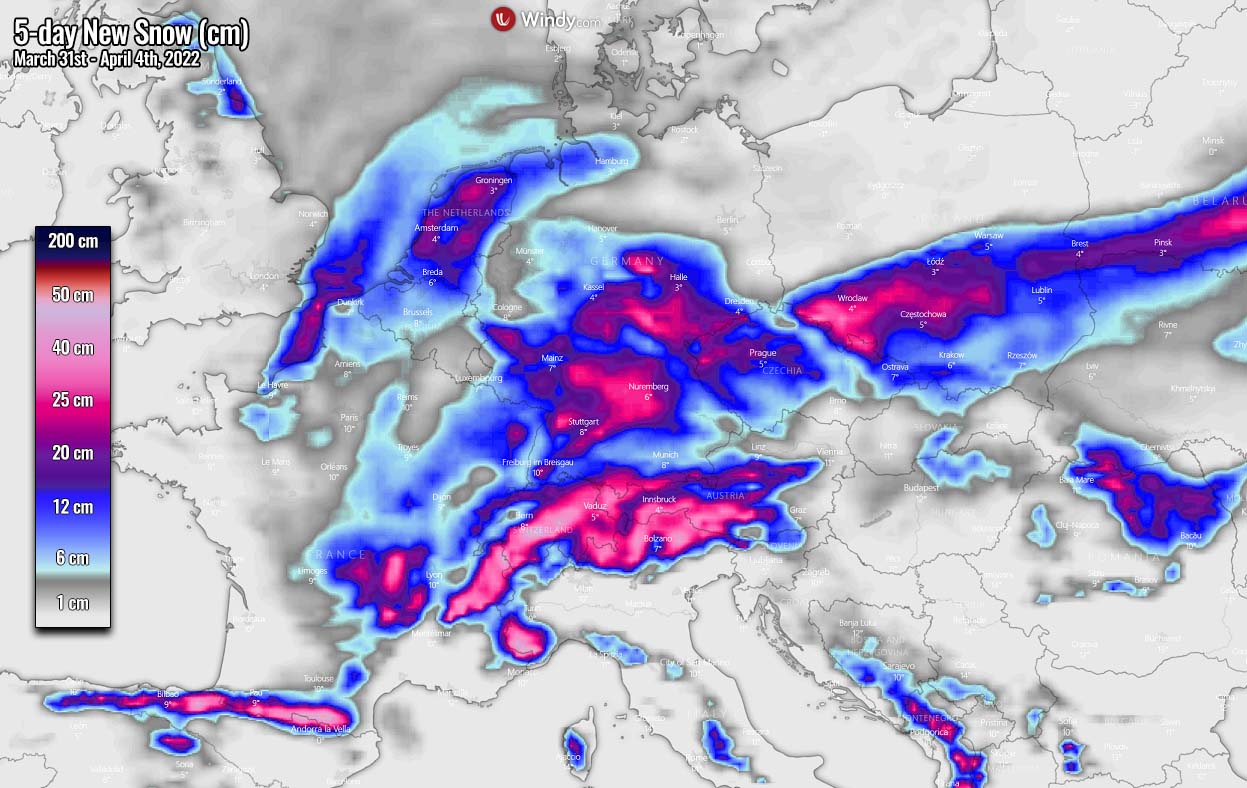 A classic heavy snowfall is also forecast to develop over the northern Pyrenees, thanks to strong northerly winds, resulting in orographic snowfall on Friday and Saturday. Some fresh snow is also expected across higher terrain in northern Spain.

MAJOR COLD WITH FROSTS COULD FOLLOW ON SUNDAY AND MONDAY MORNING

One of the greatest concerns with a cold weather pattern arriving in the spring season is usually the potential morning frosts. Despite the month of March being pretty dry for many areas, the warmth in the recent two weeks has accelerated the vegetation in many areas. Fruit trees have started to bloom in the valleys. And when we get a significant cold outbreak in spring, the valleys are at a higher threat.

The cold is much denser than the warmer air, so it accumulates near the ground. So large valleys accumulate this cold easier, so the temperatures are there even lower than the surrounding higher elevations.

Morning near-surface temperatures on both Sunday and Monday morning will be much colder than this week’s in many areas, even very low in the valleys. 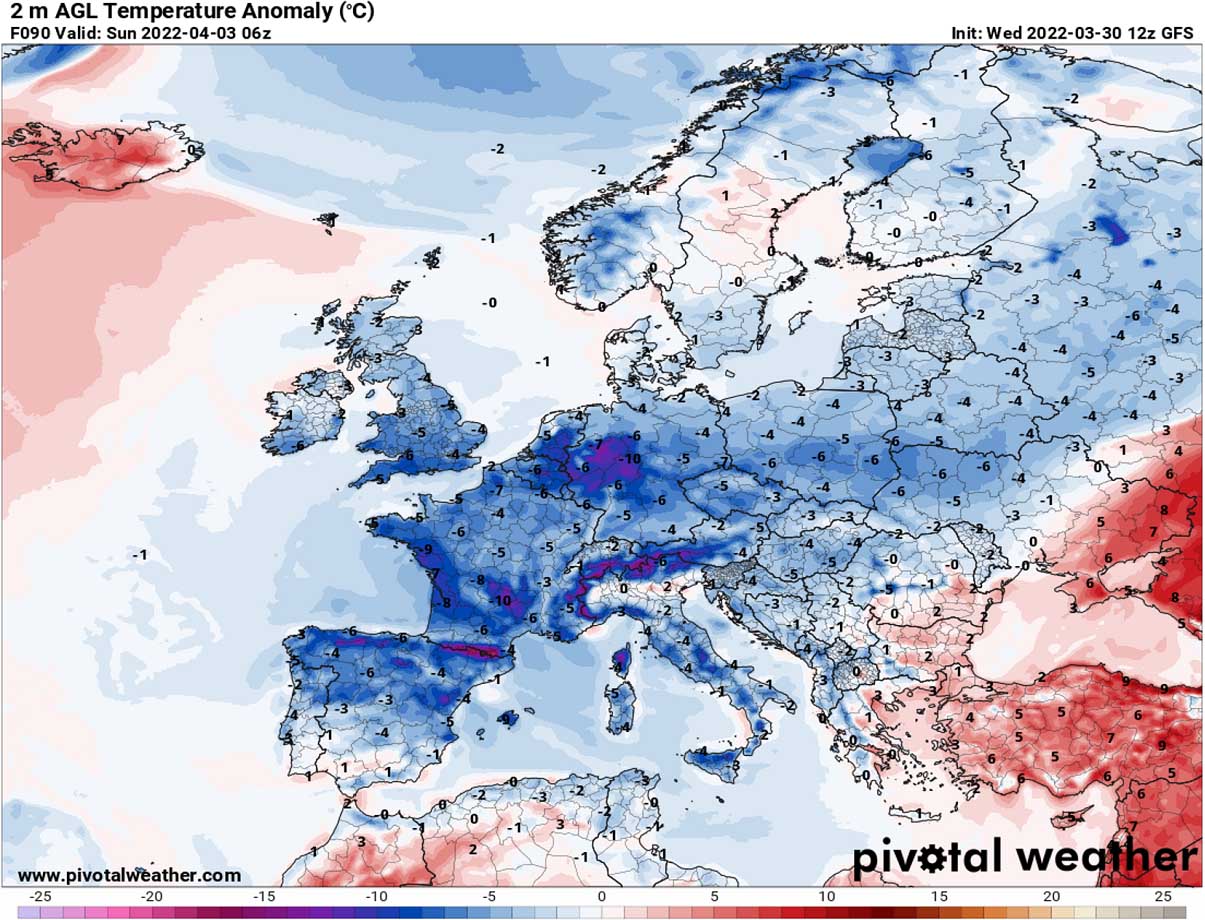 With 2m temperatures being locally even more than 10-12 °C below normal, this should bring well below freezing April mornings across western and central Europe.

How low temperatures will fall strongly depends on the cloud coverage and the winds on both days. Normally, a calm clear sky night allows temperatures to drop significantly more than during a cloudy or windy night. This is due to the radiation spreading from the ground up into the sky, resulting in the cooling of the ground levels.

Attached below is the morning temperature forecast for Sunday. Even well below -5 °C is forecast across southern Germany and Czechia. 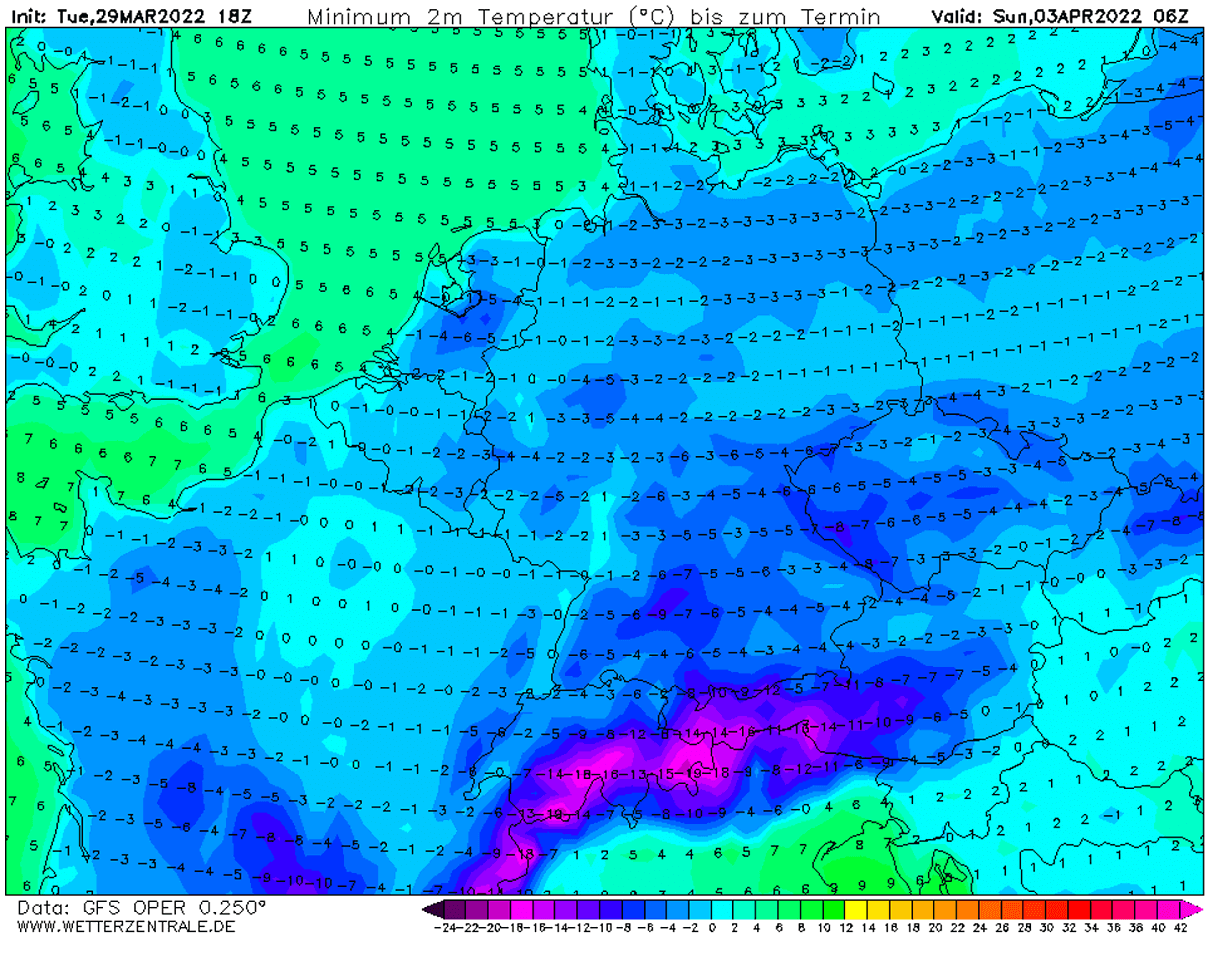 Monday will also be another day will cold temperatures in the morning, especially for the western part of Europe as high pressure will bring calmer conditions. So temperatures could easily drop below freezing a lot.

The morning lows could reach down to around -5 °C in parts of France, Germany, and Benelux again. 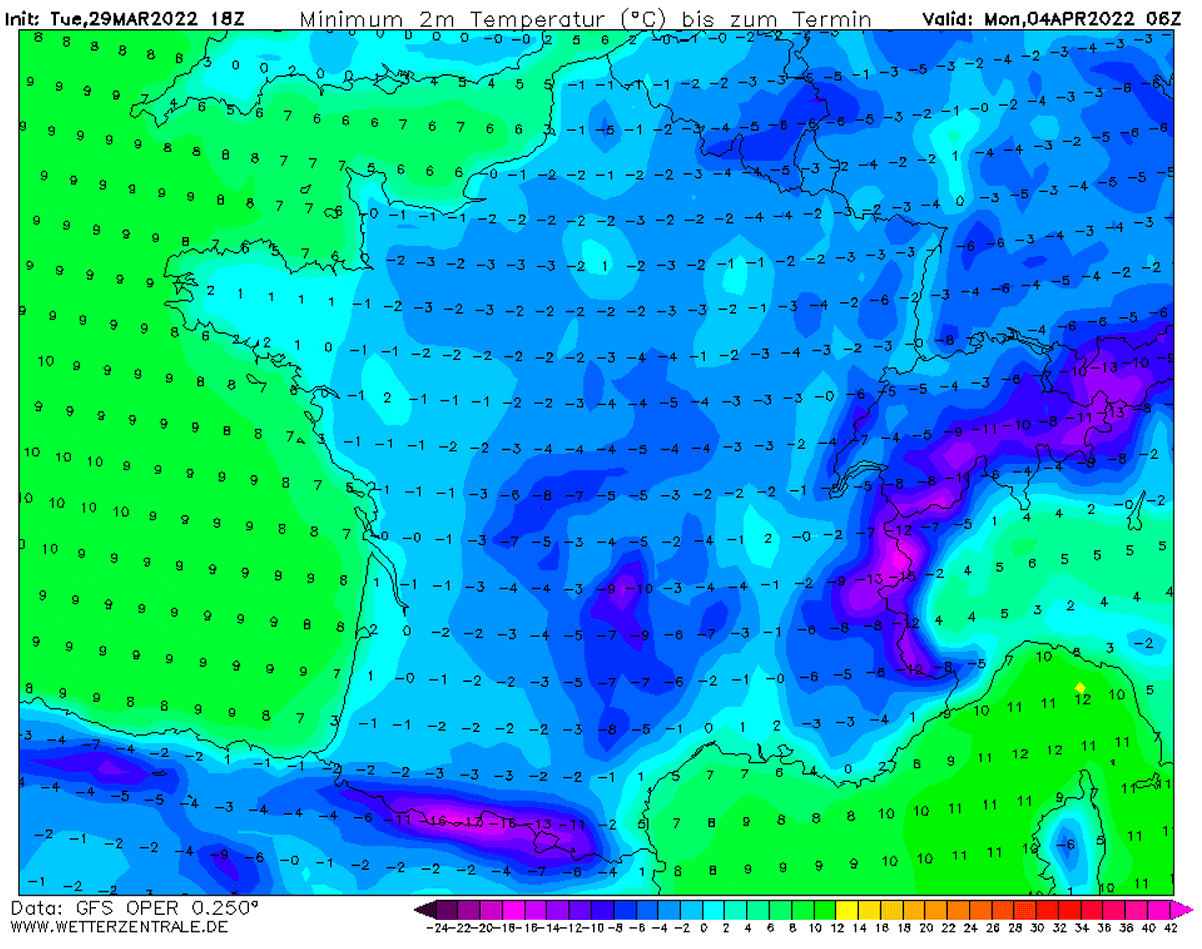 How much threat these cold season like low temperatures could bring to the starting vegetation and early stages of blossoming fruit trees depends on their phases. A combination of strong frost and several degrees °C below zero could form especially in the valleys.