As the fires in the Amazon forest continue, across the world in the north hemisphere, severe forest fires are also raging in Siberia. Just like the Amazon, Siberia also has its own fire season, which varies in intensity from year to year, depending mostly on the weather conditions, such as temperature, humidity, winds and precipitation (rain/snow). The main source of about 60-70% of forest fires in Siberia, is violation of fire safety rules by people while in the forest. There are also speculations that some people are causing fires intentionally, to conceal their illegal logging activities. This year, the fires are especially widespread, thanks to the supportive weather conditions.
Since the area is so wast, Russia accepted a special policy when it comes to forest fires. Basically the policy says that the remote forest fires should be left alone to burn out, if the economical cost of extinguishing the fire is greater than the economical value of the material burned. So unless the forest fires are threatening human property, infrastructure and lives directly, they are left to burn. Unless the economical value of the material burned by the fire, is greater than the cost of extinguishing it.

The policy was put on hold when the forest fires were raging to such a degree, that the smoke from the fires was effecting towns many hundred kilometers away from the source. The smoke was/is causing many health problems, and by area, has covered nearly one third of the country (in various concentrations). Some agencies estimate that the burned area so far, has exceeded 33.000 square kilometers.
The graphic below is by NASA Worldview, and shows the Arctic satellite imagery on August 10th, 2019, where wast dark/grey smoke can be seen across the country and into the polar circle. The red dots represent forest fire spots, detected by MODIS satellites. Fires that are below clouds cannot be detected, and are not shown.

The NASA GEOS-5 model also nicely shows the smoke spreading, being tracked by the aerosols of Carbon Monoxide (CO). Most of the fires are remote and hard to reach, yet still having widespread influence. 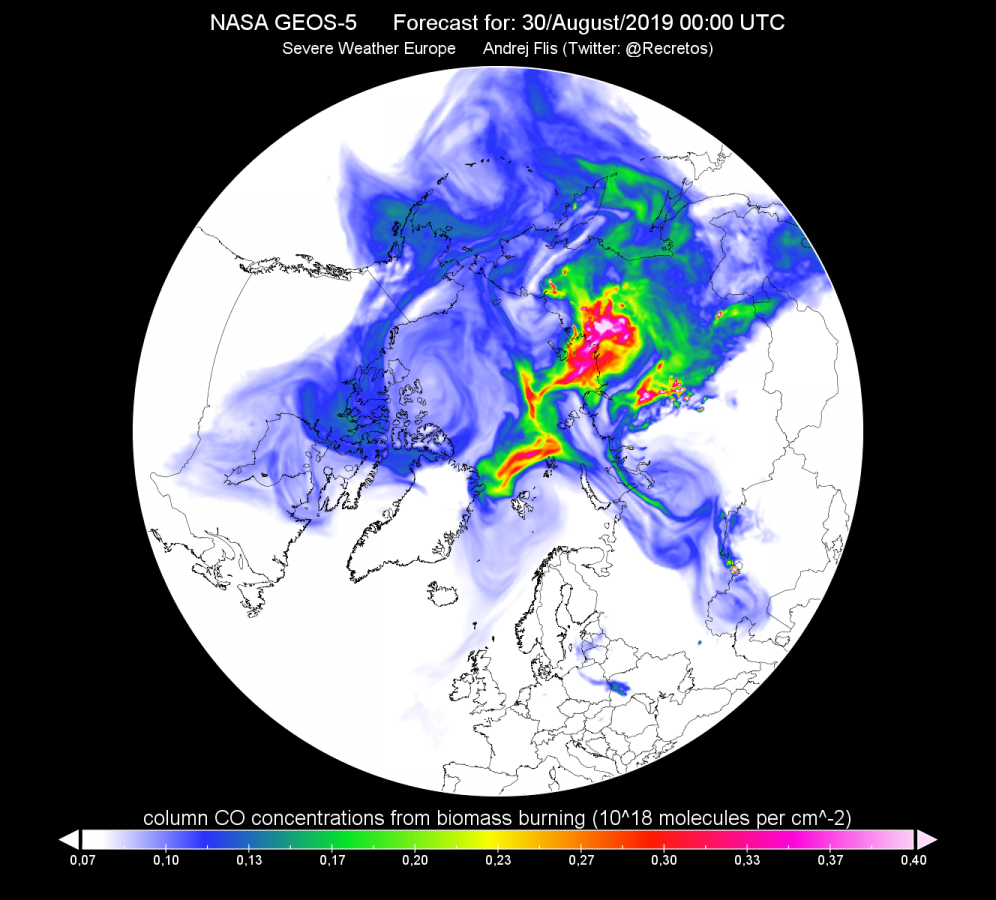 Forest fires are always a huge problem, for people, wildlife and also generally for the environment. Vast amounts of smoke and ash, especially near the polar circle, can also have indirect effects on the climate. One of the problems is caused by the black carbon (soot). These are dark, black particulates that enter the atmosphere from these fires, and flow with the winds,  eventually falling back to the ground. Black carbon is a pollutant found all around the globe. It is produced by factories, vehicles, heating furnaces, etc… Which is why we can see it all around the world in various concentrations (usually in high concentrations in heavy industrial regions of east Asia).
Black carbon particles from forest Siberian forest fires, fall down to the arctic ice. As these particles are black, they absorb sunlight and can accelerate ice melt if found in high enough concentrations. Our graphic shows black carbon concentrations, where high values can be seen emerging from the Siberian forest fires, circulating into the polar circle. 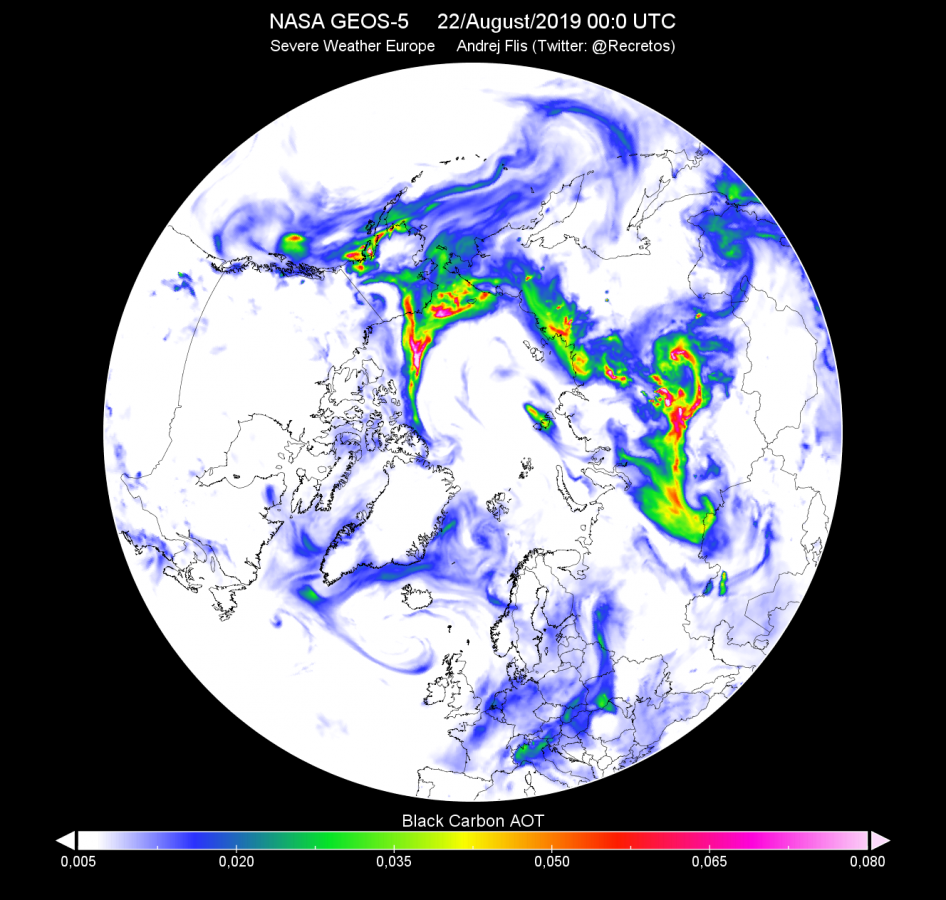 A few words from NSIDC on smoke affecting the Artic sea ice:
“The smoke has two potential effects on sea ice. First, as it drifts over the ice, the smoke particles scatter solar radiation and reduce how much is received at the surface. This has a cooling effect that will tend to reduce the rate of ice loss. However, smoke particles that settle onto the ice will darken the surface, thus decreasing the reflectivity of the surface, or albedo. This increases the amount of solar energy absorbed by the ice and enhances melt. The atmospheric scattering effect of the smoke is short term and dissipates after the smoke drifts away. The surface albedo effect has a longer-term impact and could serve to enhance melt rates through the summer.”