About 14 days ago, historic amounts of Saharan dust have spread into southwestern parts of Europe, turning skies and snow into apocalyptic, desert-like scenery. The weather pattern this week is set to deliver another, potentially huge dust cloud across the Mediterranean into central Europe before the next deep frontal system with a lot of rain arrives from the north. The large plumes of dust particles collecting over the deserts of Algeria will lift far north across most of the southern half of Europe from Tuesday through Thursday. 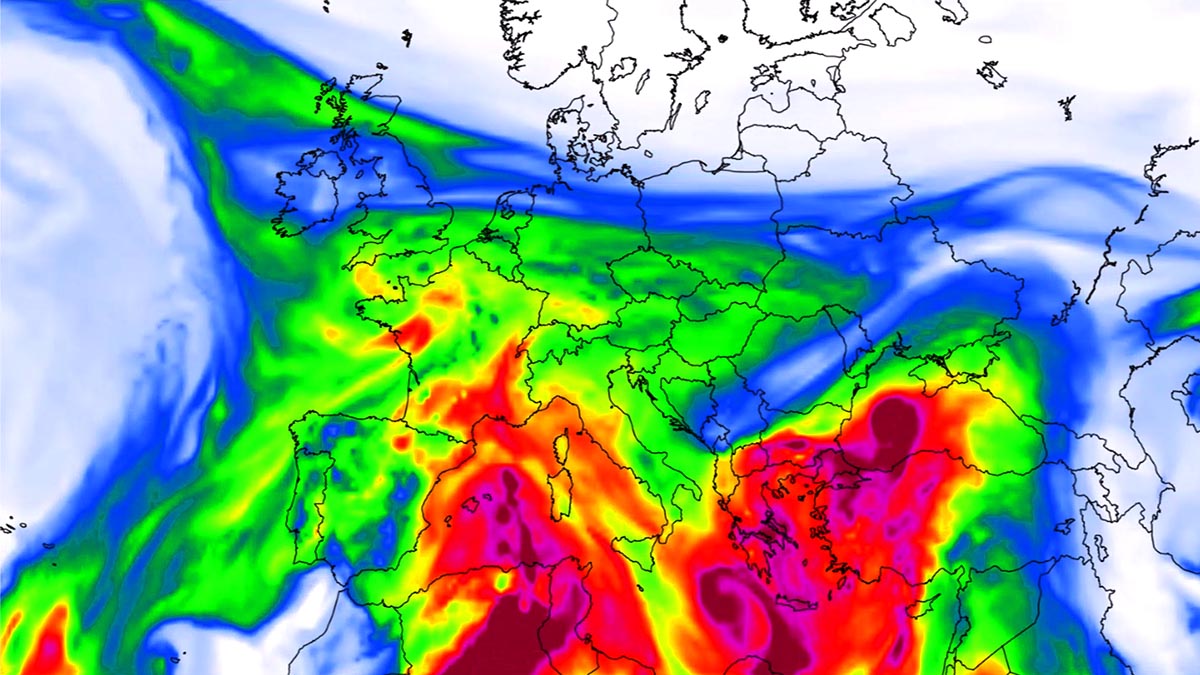 The weather pattern over Europe has been unusually stable and extremely dry since the cold season ended, with maintaining strong upper Highs and ridges over the continent. In the coming days, the pattern flips as a very deep trough emerges from the north, boosting the jet stream and turning it to a more southwesterly direction.

This is a near-ideal recipe for a significant amount of Saharan dust lifted from the deserts of northern Africa, gradually spreading into the Mediterranean, central Europe, and the Alps first. Then pushed across the Balkan into southeastern Europe with the southward progress of the frontal system after Wednesday. 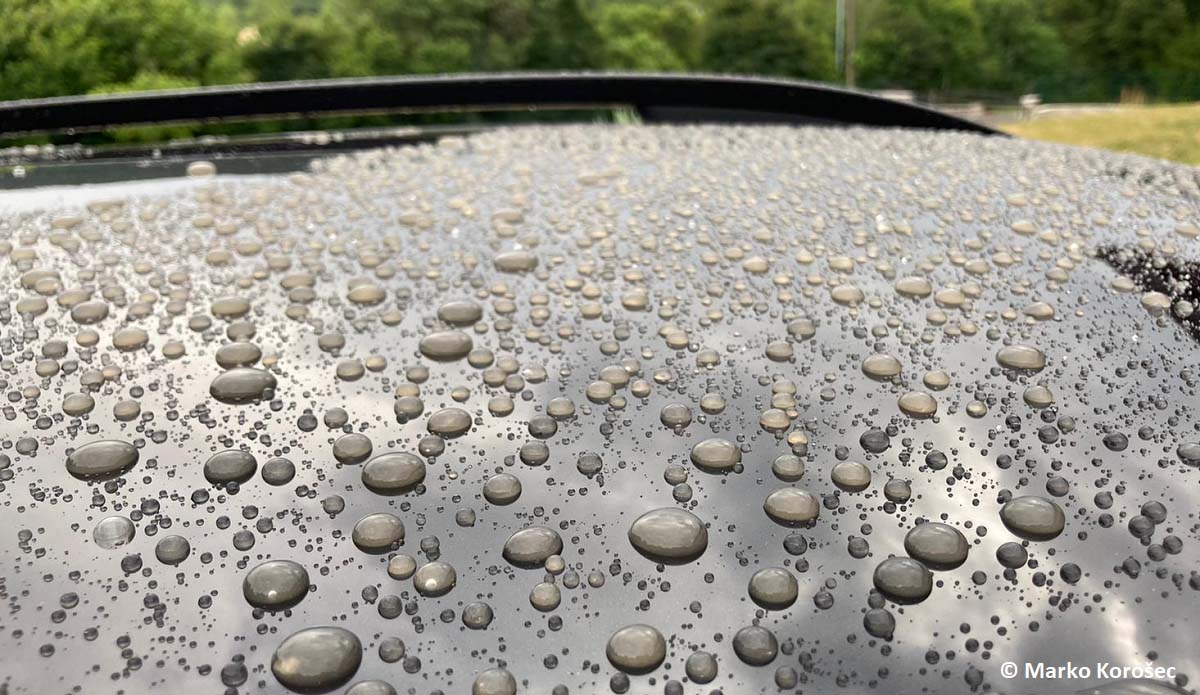 The Saharan dust cloud will travel along the increasing southwesterly high-level winds, between the northerly trough and the persistent blocking High to its south. The establishing general weather pattern across Europe indicates a lower geopotential height to the west and high pressure across the east and south parts of the European continent.

This means that this weather pattern will turn the flow of the winds to bring the air mass directly from the Sahara desert. The direction of upper-level winds often increases the potential for massive dust cloud particles spreading far north into the European continent. Actually pretty similar we have seen on March 15th, when a huge amount of dust covered the snow across the Pyrenees mountain range. 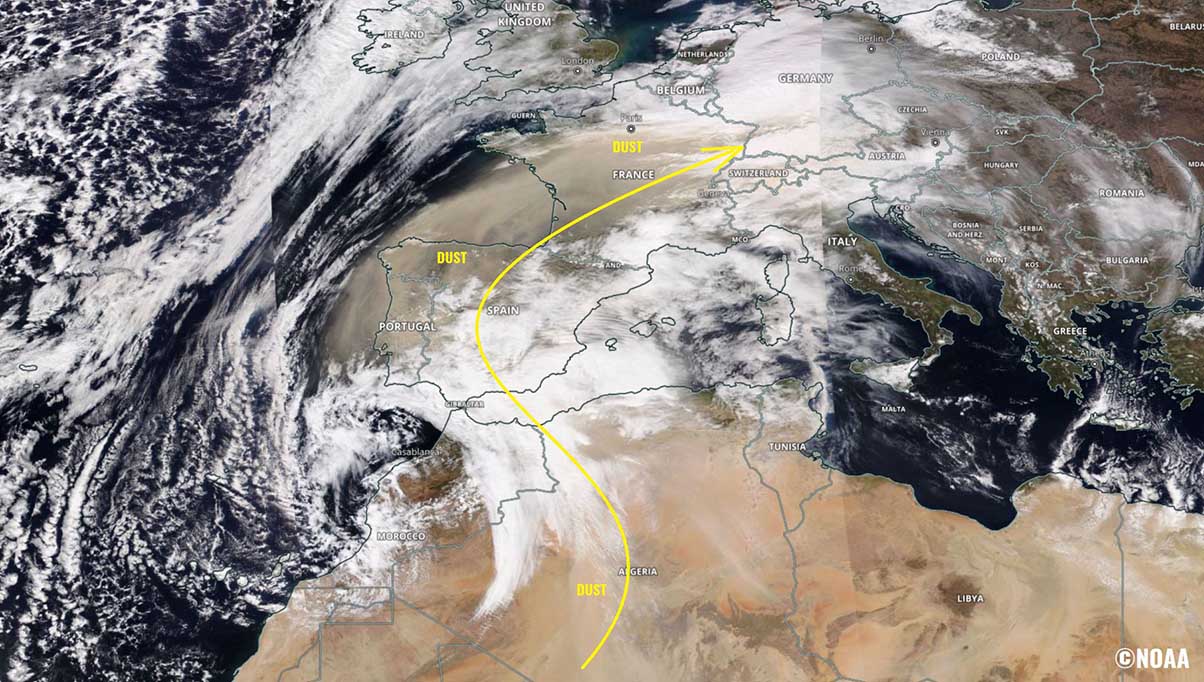 That event brought truly a remarkable amount of Saharan dust across the Iberia peninsula and parts of the western Mediterranean. Very high, even historic dust concentrations turned skies and snow into orange, desert-like scenery as we could see in the tweet above. Some of the scenes looked literally apocalyptic over the Pyrenees mountains.

The forecast amounts of Saharan dust coming up this week are yet again forecast to be very high and spread across a large part of Europe. The rainfall coming up after Wednesday will bring the particles down to the ground, covering the snow in the Alps and accumulating into the soil. Let’s quickly go through the basics of the desert dust clouds formation and their effect on the air quality.

ORIGIN OF THE SAHARAN DUST CLOUD

The Saharan dust cloud, as its name hints, comes from the Sahara desert. When the general wind direction in the upper part of our atmosphere is blowing from south-southwest towards north-northeast, the dust particles can be carried far north into the southern, southwestern, and southeastern parts of the European continent. Often originating from the Algerian deserts. Dust particles are sometimes brought even farther north into eastern, western, or northern Europe as well.

When a huge dust cloud event occurs and coincides with a frontal system and falling rain, the dust will be brought to the ground. Then, we will be able to see the dust deposited on objects and we find an (often thick) layer of dust, dusty drops on the car, or similar. The skies will turn pretty hazy and visibility reduces a lot. 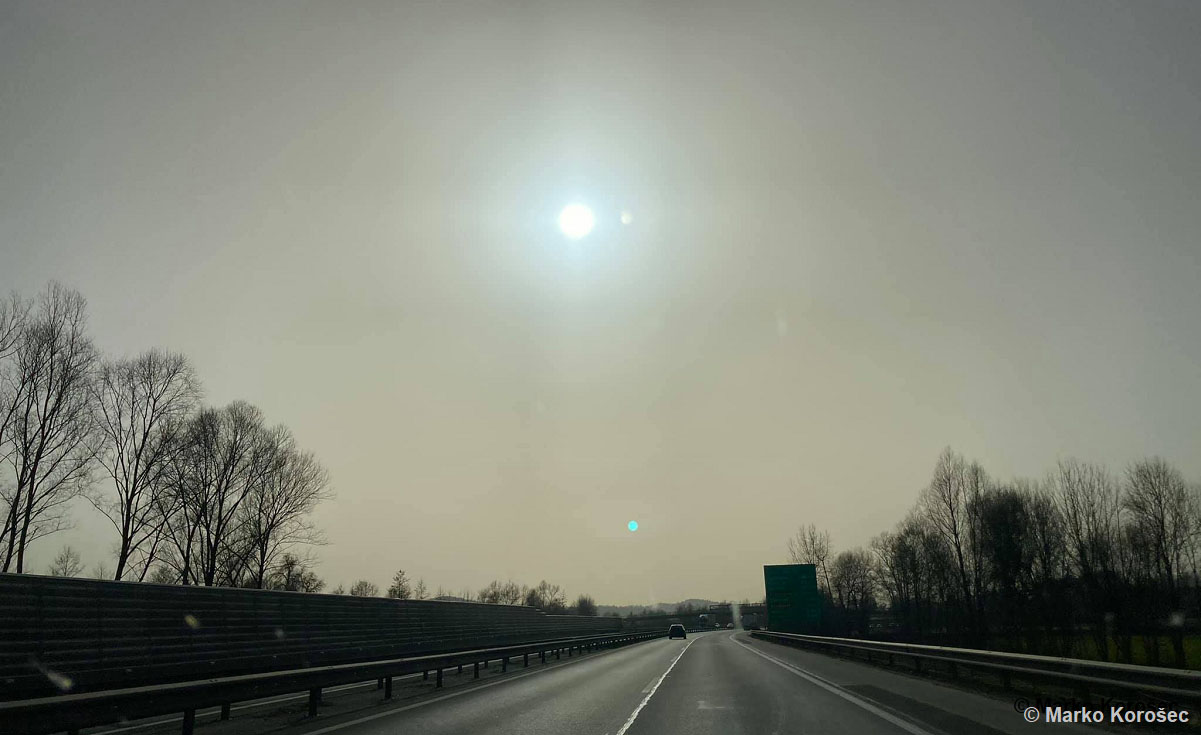 A formation of a massive dust cloud is sometimes related to the thunderstorm activity near or over the desert areas in northern Africa. And the presence of strong winds then blow the dust particles far away downwind, normally north-northwest or north-northeast towards Europe.

Depending on the intensity of the jet stream, huge dust cloud density could form and travel long distances, even across the Atlantic Ocean. 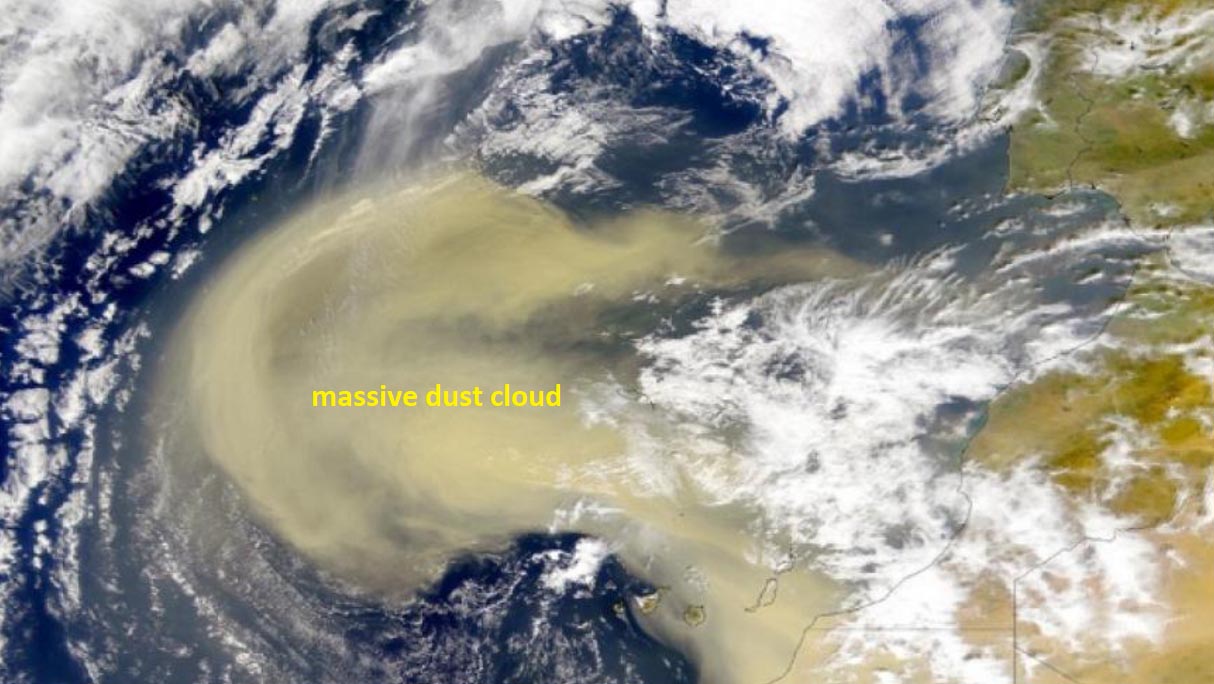 Besides gaseous pollutants, the Earth’s atmosphere is also polluted by different particles. These particles, either in suspension, fluid or solid-state, have a divergent composition and size and they are sometimes called aerosols. These aerosols are often cataloged as floating dust but are best known as PM particles. PM is an abbreviation for Particulate Matter. These PM particles are typically categorized based on their aerodynamic diameter.

By definition, the aerodynamic diameter of a dust particle is the diameter of a sphere-shaped particle that shows the same behavior in the atmosphere as a dust particle (which does not necessarily have a sphere shape). In the framework of air quality issues it could bring, particulate matter is the most important. 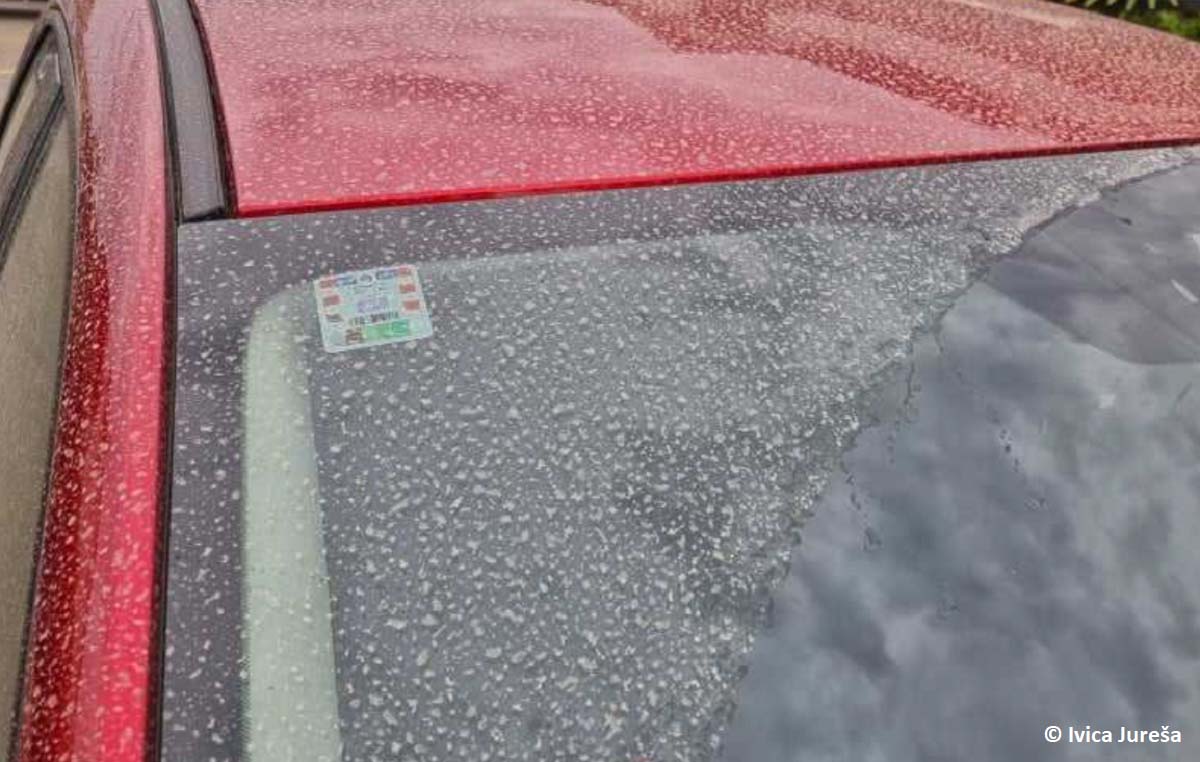 Particulate Matter such as coarse particles (PM10), fine particles (PM2. 5), and ultrafine particles (PM1) is defined as the fraction of particles with an aerodynamic diameter smaller than respectively 10, 2.5, or 1 micrometer (one µm). For you to better imagine how small these particles actually are, 1 µm is 1 millionth of a meter or 1 thousandth of a millimeter.

Indeed, these are extremely small particles. And if we compare those with the average diameter of human hair which equals 50-70 µm, we can see dust cloud particles are 5-50x smaller than that.

The general weather pattern will begin its significant change over the next 48 hours with the upper-level ridge gradually weakening and collapsing until Wednesday while a deep and large trough develops over the northern half of Europe. At the same time, a weak upper wave begins deepening to the east of Azores High, gradually merging with the large trough coming up from the north. This leads to a strengthening of a southwesterly jet stream towards southern Europe.

From Sunday into Monday, the upper wave over the southern Mediterranean and to the west of Morocco began with the mid/upper-level flow changes. This had brought our attention to the ongoing activity over north Africa, precisely Algerian deserts as massive amounts of Saharan dust have begun moving towards Europe.

The NASA MODIS satellite image indicates that both waves have initiated the Saharan dust cloud advection from Algeria towards the northeast, as well as into the western Mediterranean region and Iberian peninsula. 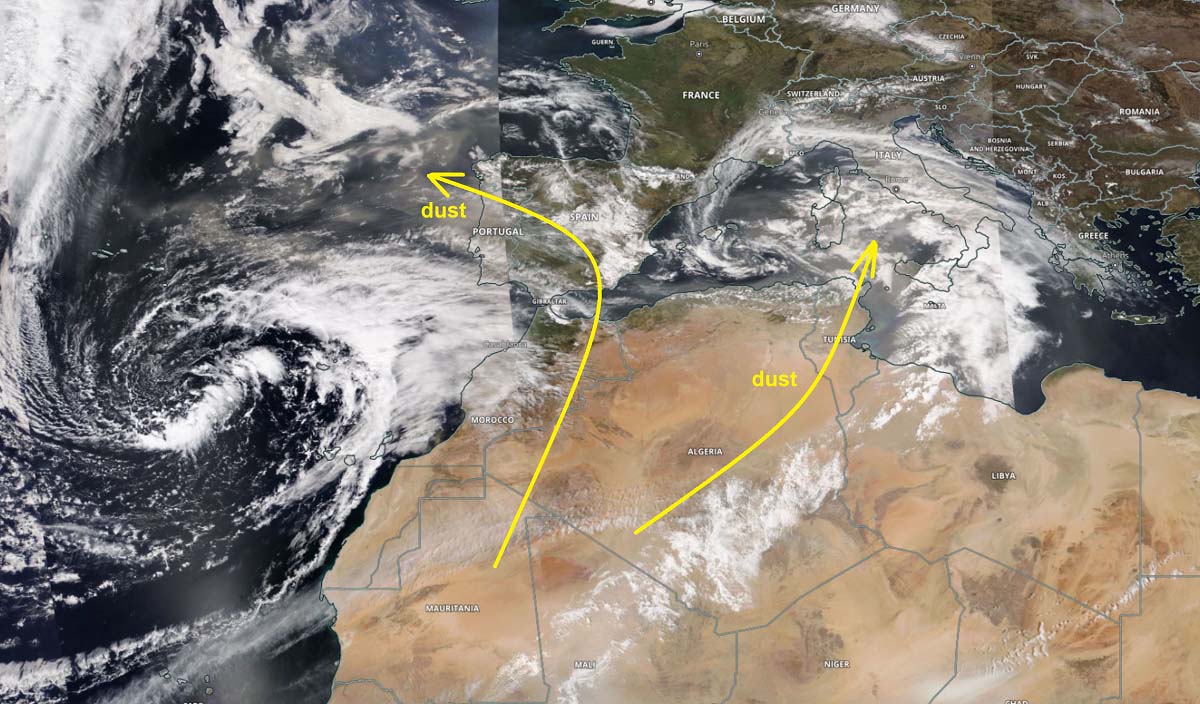 A thick dust cloud gradually continues spreading north-northeast and has already reached most of Iberia and a large part of the west-central Mediterranean by Monday evening. Dust particles deposits have been reported from Spain, Portugal, Italy, and Malta.

Just by the look at the different colors on the satellite image above, we can easily see where the thickest layers of dust clouds were observed on Sunday and Monday. The gradually changing weather pattern with favorable strong jet stream (marked with yellow arrow) will help to additionally push the dust further across these regions, but also far northeast towards central Europe, the Alps and later on also across the Balkan peninsula from late Tuesday to Thursday.

We can also see how stable and mostly cloudless skies are seen over a large part of western, central, and eastern Europe. This is due to very stable weather under strong surface high-pressure systems. Allowing air mass to descend inside them, and dry out. Indeed also warming a lot, as we have been experiencing very warm weather in the recent days.

South-southwesterly mid to upper-level winds has developed between the decaying European continental ridge and the north European depression, where the latter will be gradually moving south in the coming days. This will help the Saharan dust cloud to advect farther northeast, reaching central Europe first, but also spread towards western and part of eastern Europe.

The video animation reveals the progress of the dust cloud over southern portions of Europe this week.

Attached below is the 500 mbar (jet stream) wind chart, showing strong winds ahead of the upper wave over southwestern Europe. This is a pretty typical setup across southern Europe when a cloud of Saharan dust gets its way far north towards continental Europe. 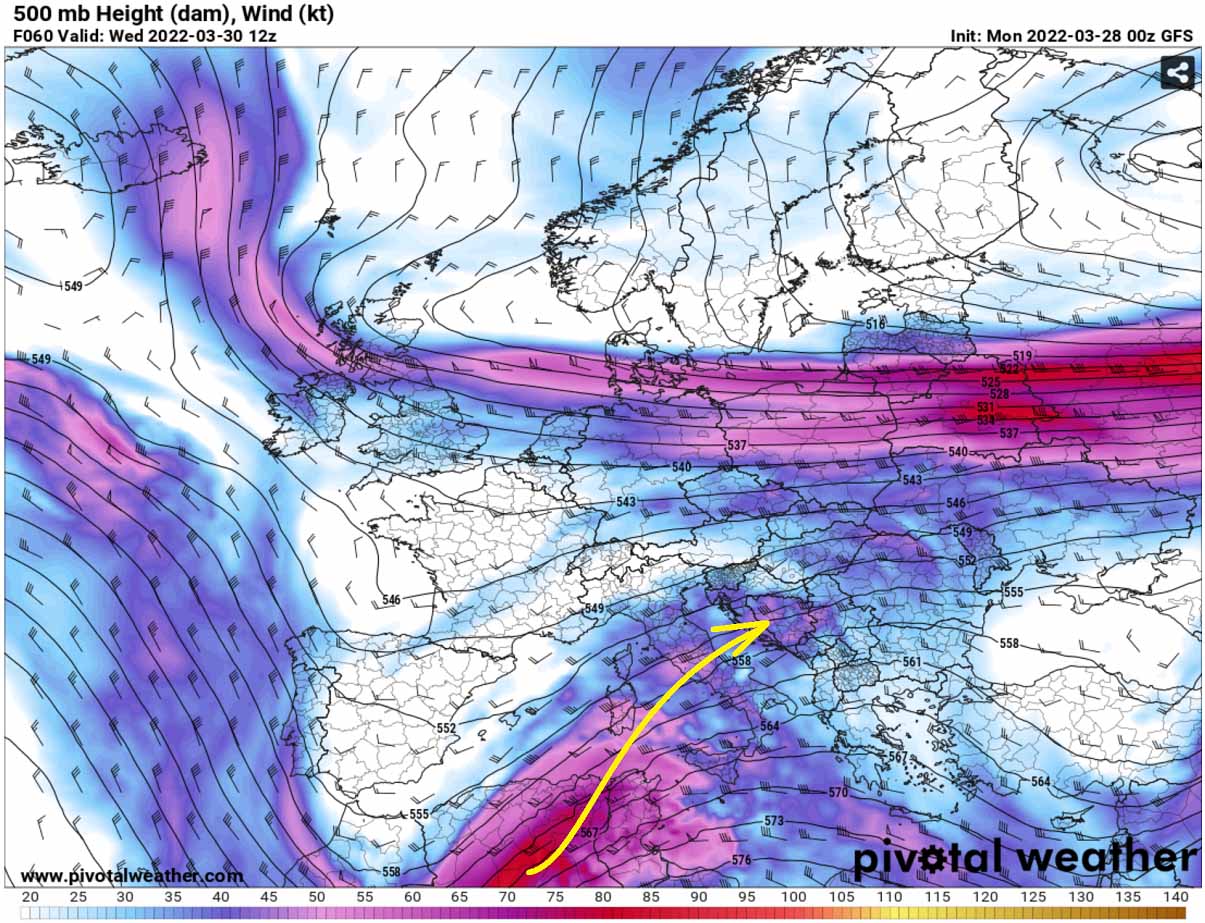 The highest concentrations of the Saharan dust cloud will be first spread across the northern parts of the Mediterranean on Tuesday and will continue north-northeast Tuesday tonight reaching the Alps and France as well. We can also see some dust particles are also spread farther west towards Benelux, England, and Germany.

A huge pool of dust concentration is also present over Greece and Turkey, thanks to the decaying wave that was over the southern Mediterranean on Monday. Southwesterly winds will push the desert dust into the southern Balkans through Tuesday. 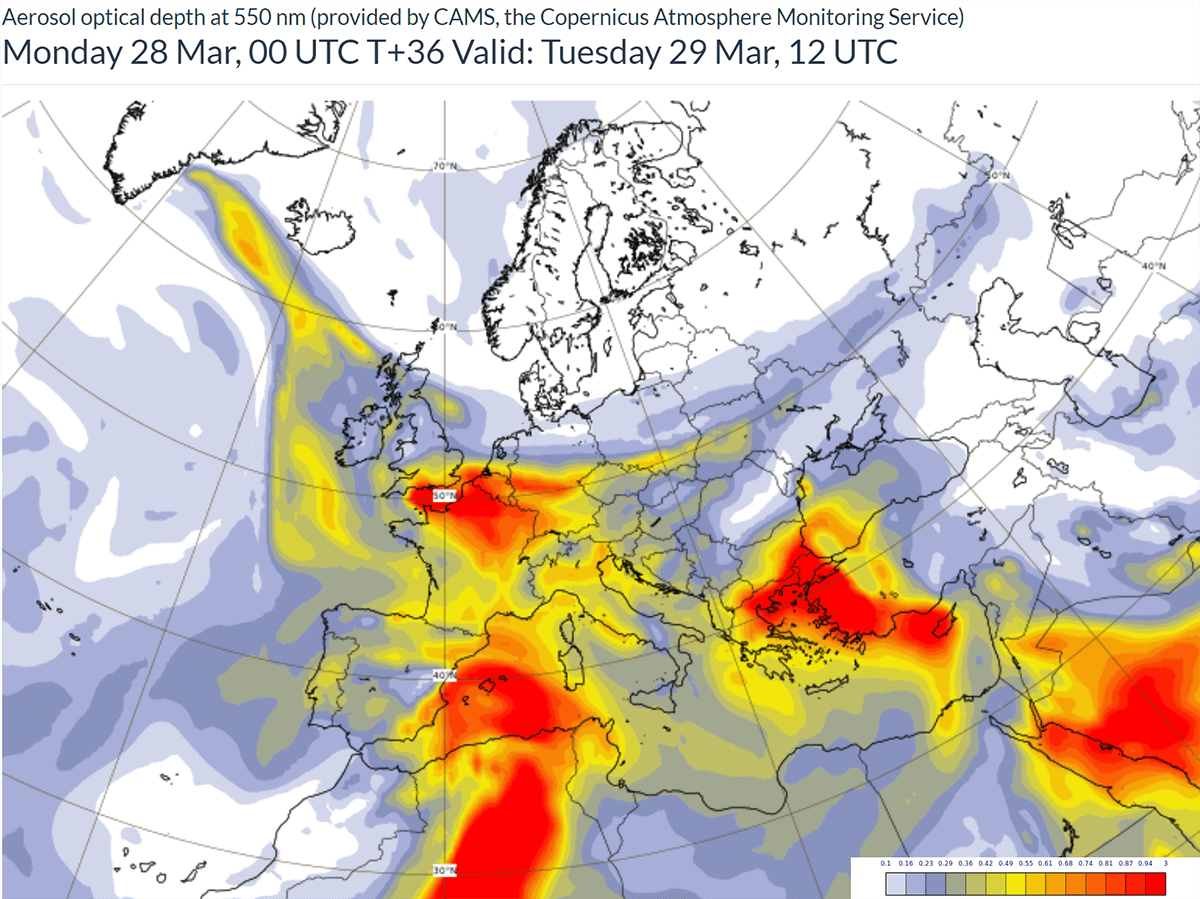 As we can quickly see, part of the huge and dense dust cloud is being accumulated over the western Mediterranean. This dust cloud will advect into central Europe through Wednesday, with a high concentration of the particles forecast. These aerosols will be accumulating on the ground as rainfall is forecast to arrive during the day as well.

With all the significant thickness of dust clouds remaining over the western Mediterranean, the massive amounts of dust are forecast to reach the Alpine region and the northern Balkans countries by Wednesday night. Dust deposits will be significant in places.

The Copernicus Atmosphere Monitoring Service (or short: CAMS), warns that high concentrations of dust can have health impacts on the respiratory systems of all people in the affected regions and add to air pollution from local sources.

Given the number of dust particles being quite significant again within this Saharan dust cloud advection, it could again lead to skies turning orange with limited visibility and dust deposits on the cars and other objects exposed outside. As well as atop of snow in the higher Alps. 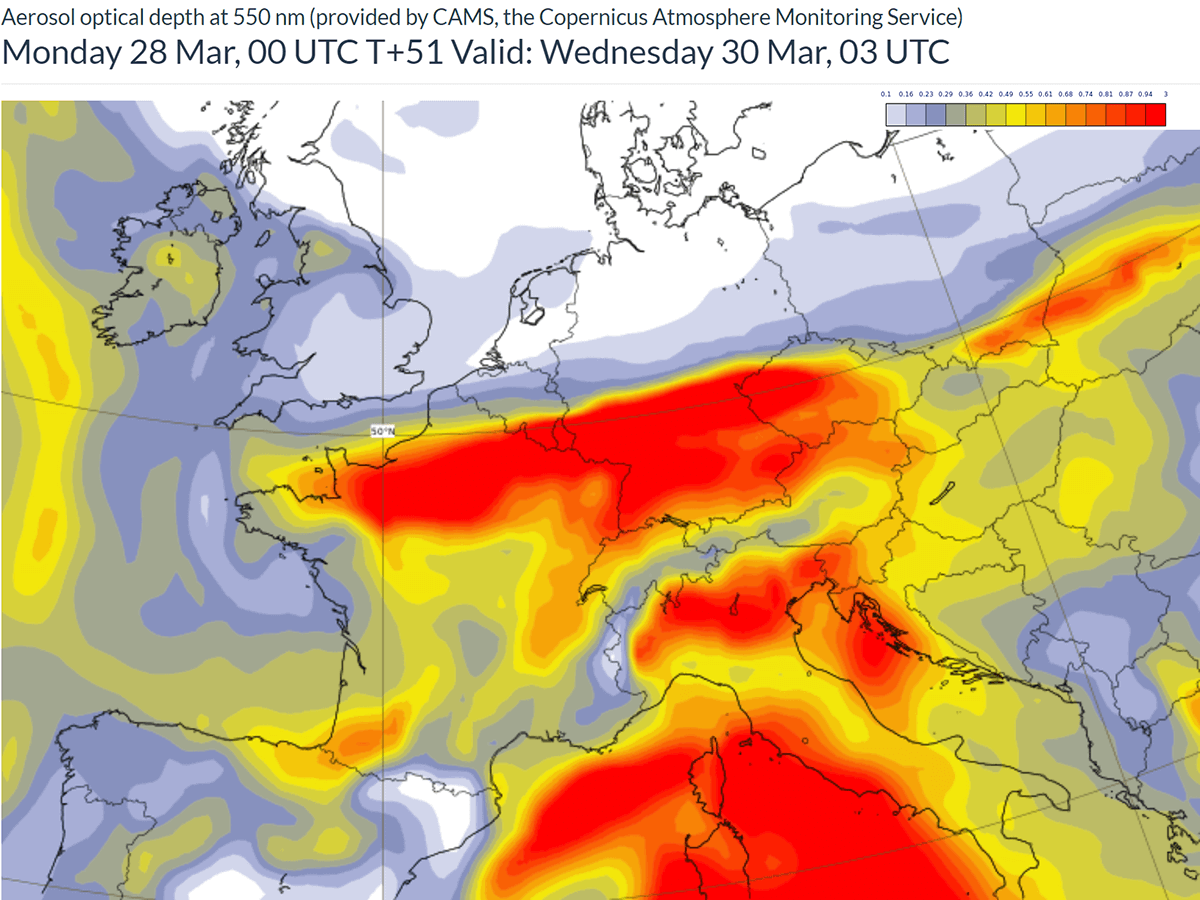 Towards Thursday morning, the large trough emerging from the north will push the dust cloud farther south-southeast, so the dust concentrations over the central and western parts of Europe will gradually vanish.

From Thursday through the next weekend, the northern trough will grow pretty large, dominating most of Europe. Thus, creating a lot of frontal systems and rain for the central and southern parts of Europe. We can see the geopotential/pressure lines will be tight on its front end, so the upper winds will be pretty strong from north Africa to southeast Europe. 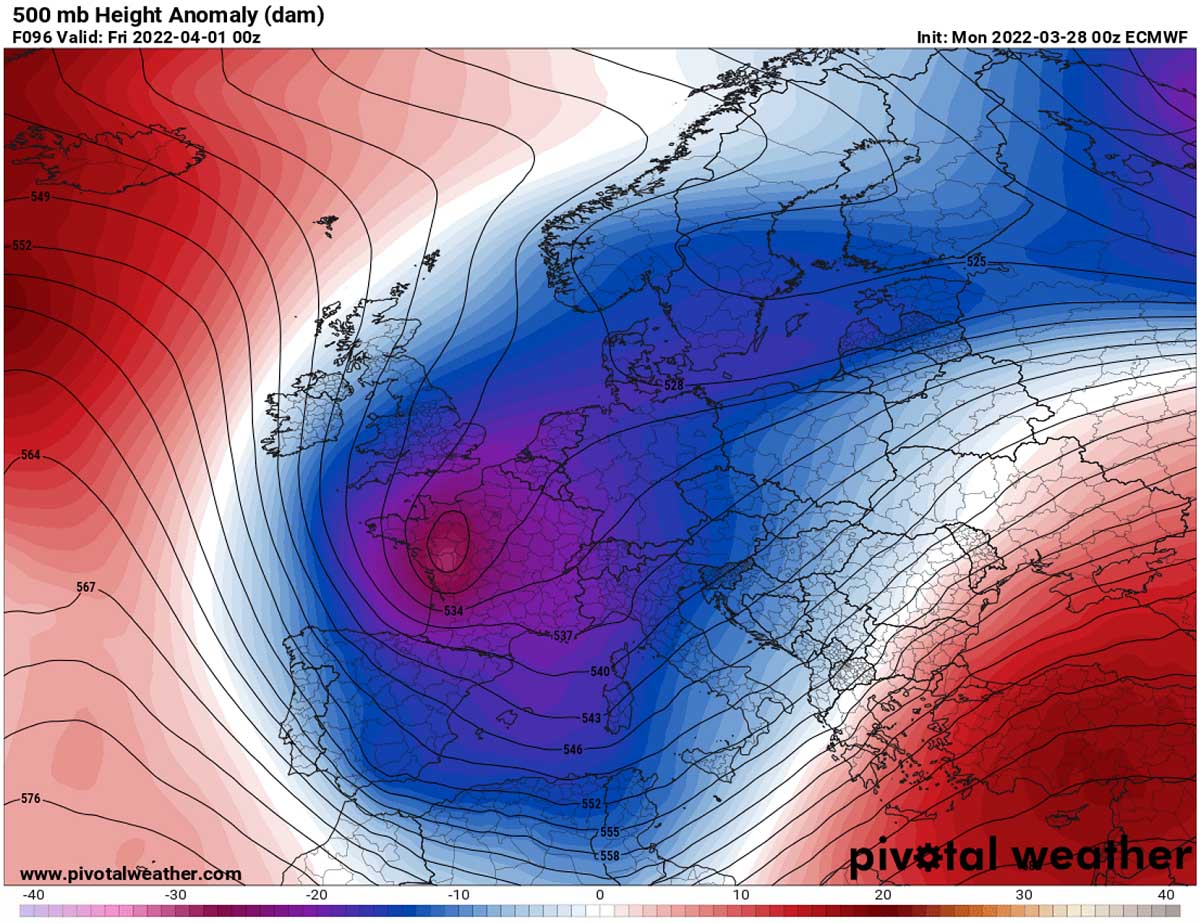 This will allow the concentration of dust particles to become more significant over the southern Mediterranean and the Balkan peninsula on Thursday and Friday.

This shift in the winds is caused as the upper High will disappear from the Mediterranean, so the strong southwesterly upper-level winds will persist from northern Africa towards southeastern Europe for several days, being favorable for maintaining the advection from the Saharan desert. 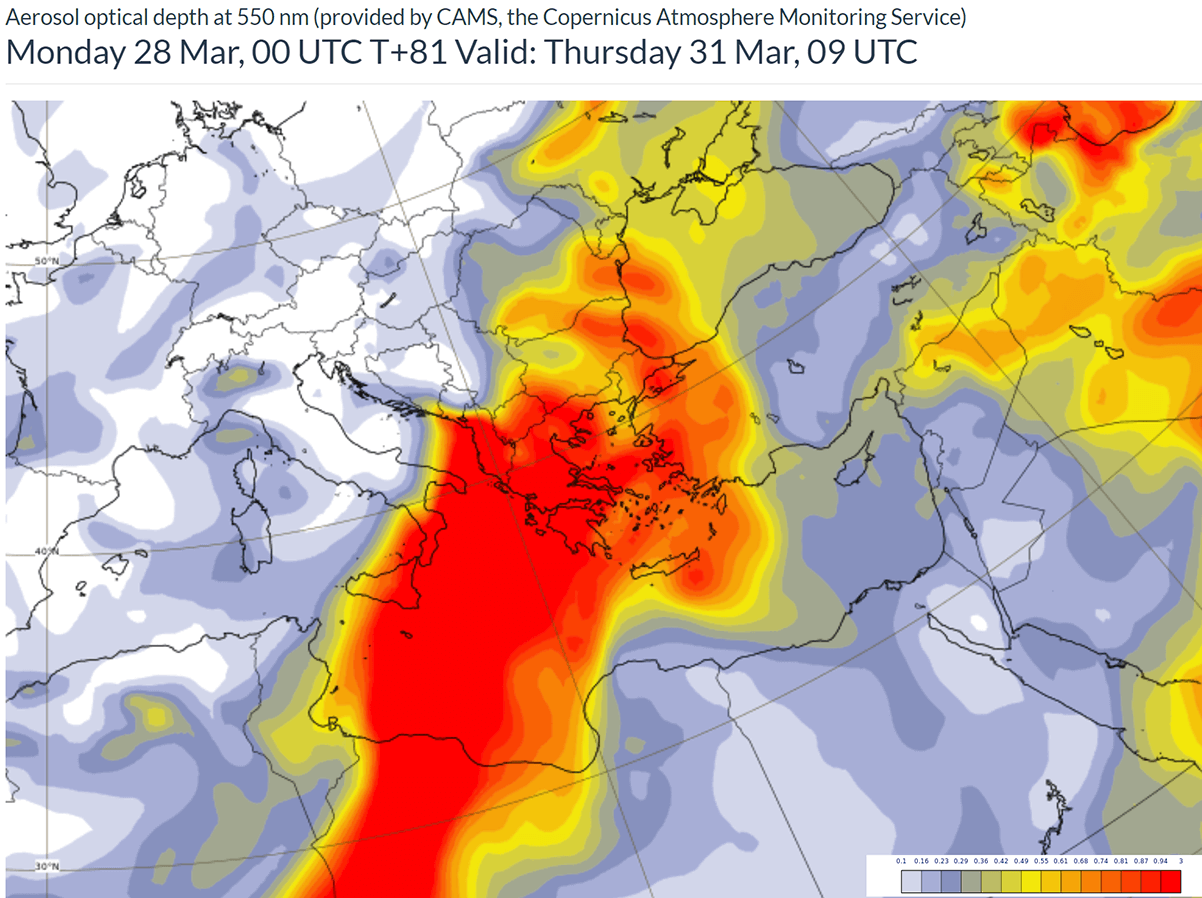 Farther north, closer to the core of the upper low, precipitation will take the cloud particles down to the ground, so skies will be cleared of them completely. A lot of rain is forecast especially across the mountain ranges, e.g. Apennines in Italy and Dynaric mountain range along the western Balkan peninsula.

Likely from 60-120 mm of rain is forecast for part of the Apennines through Saturday, similar across parts of western Slovenia and northwestern Croatia. Even more rain, possibly 200-300 mm seems possible farther south where typical rainfall maximum develops, e.g. Montenegro. 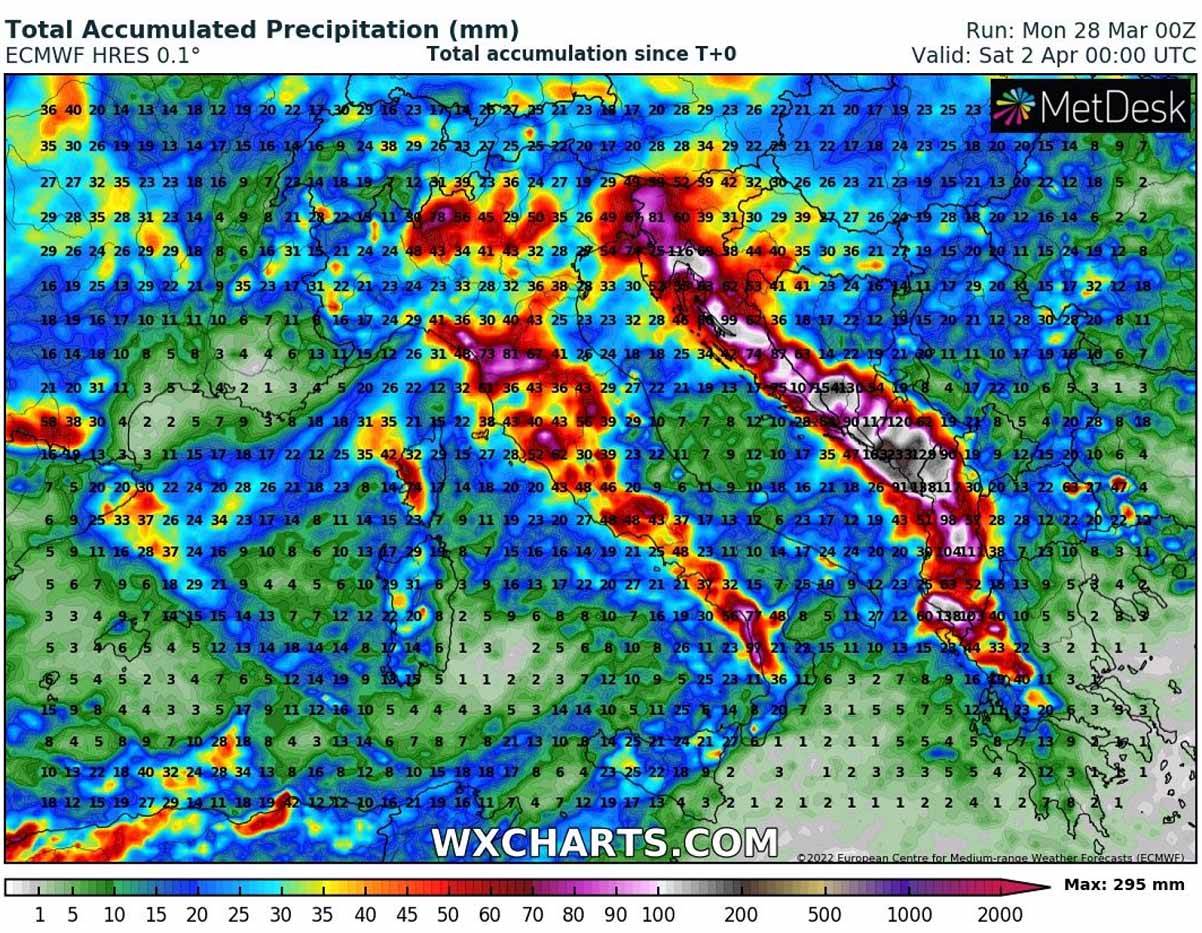 This will finally be a much-needed rainfall event for several days, as it has been extremely dry across many parts of Europe. But especially across Italy, most of central Europe, and the Balkan countries.

Note: We will have more updates on the development of a large upper trough soon – stay tuned! It appears likely that a return of a massive cold pool will follow over the weekend for a large part of Europe, enhancing the risk for frost in many areas.

See also a Similar event over south-central Europe, on May 14th, 2020.