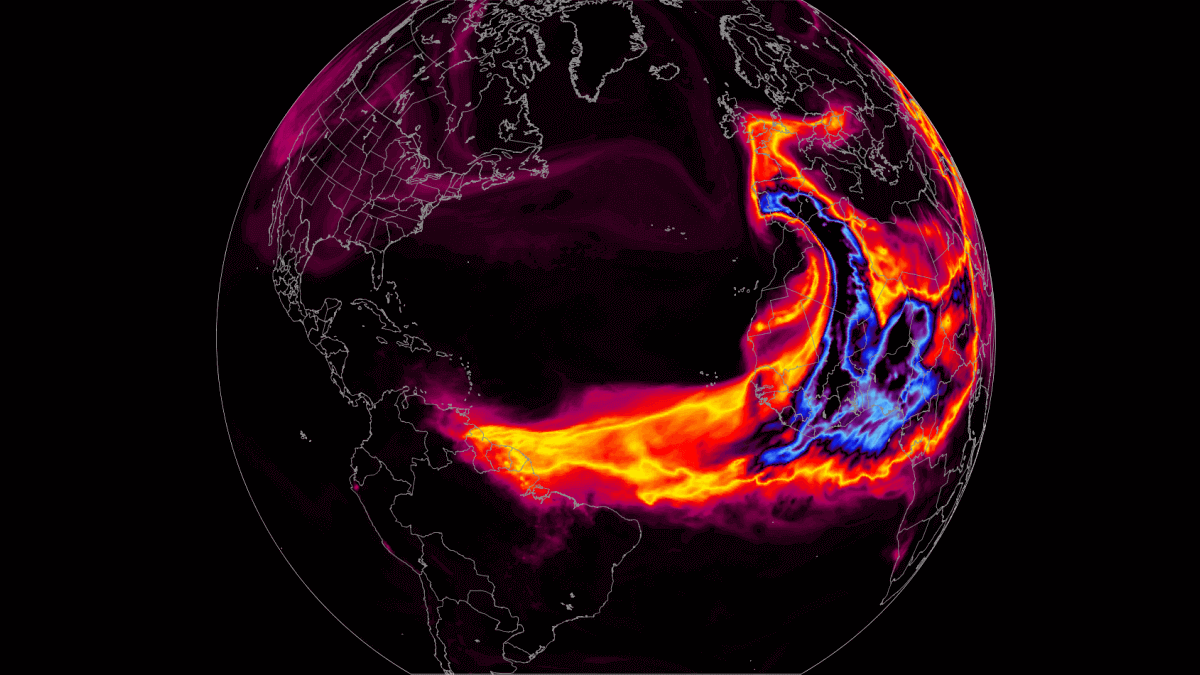 These large dust clouds are also called “SAL” (Saharan Air Layer). The Saharan Air Layer is an air mass of very dry air, filled with desert dust that forms over the Sahara Desert during late spring, summer, and early autumn.

But some larger dust storm events can also form in early Spring. These dust storms move over the tropical North Atlantic, “pulsating” every few days. Some events during the warm season can reach very high volumes of dust and can reach far to the west.

The desert regions of northern Africa are estimated to release about 800 million tons of dust each year. That is 70% of the total global dust emissions, and six times more than the next largest source, Asia. A large portion of these emissions is carried to the west over the Atlantic Ocean. Image by Adams et al. 2012.

Near the eastern coast of South America, over 130 million tons of dust particles still remain in the air, and around 30 million tons fall to the surface over the Amazon basin. This acts as a natural fertilizing process for the Amazon rainforest. 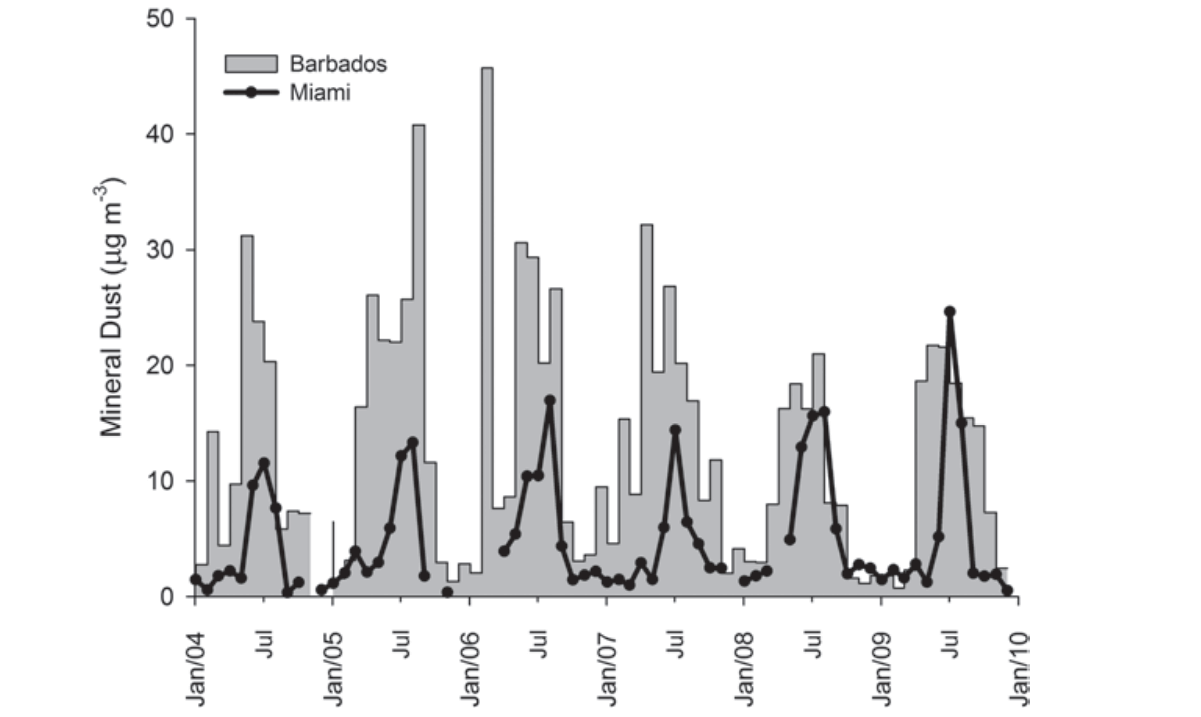 The Saharan Air Layer is warm, stable, and very dry. It has about 50% less moisture than the typical tropical atmosphere. The warmth, dryness, and strong winds associated with the SAL have been shown to suppress tropical cyclone formation and intensification.

As the SAL crosses the Atlantic, it usually occupies a 3 to 4km (2 to 2.5-mile) thick layer of the atmosphere with its base starting about 1.5km (1 mile) above the surface.

But how can these large dust storms travel so far to the west and even reach the far northern parts of the United States and Canada? The answer are the tropical Trade Winds.

Trade winds are the prevailing easterly winds that circle the Earth near the equator. They are stronger and more consistent over the oceans. These easterly winds at low and higher levels are a natural steering mechanism for dust storms and also for tropical storms during the hurricane season.

The image below shows the main near-surface wind directions, with global trade winds in yellow and red colors. In the North Atlantic, the circulation pattern is clockwise, as a semi-permanent high-pressure system is present in that region.

On the image below you can see the average surface winds in the past 40 years. This nicely reveals the prevailing easterly trade winds and the high-pressure (clockwise) circulation in the North Atlantic. 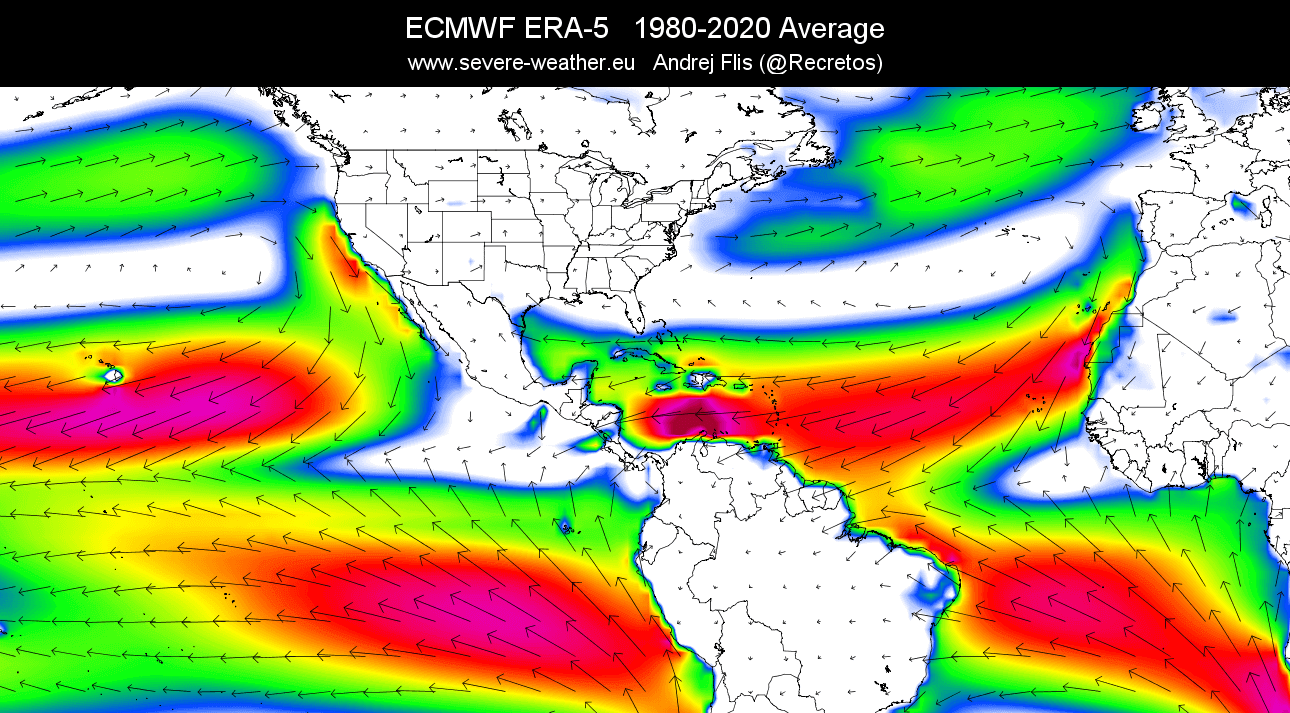 We also produced a 40-year average for sea level pressure in the late winter to spring period. The image below shows the persistent high-pressure system in the subtropical North Atlantic. This helps to explain the direction of the trade winds, as high-pressure systems spin clockwise in the Northern Hemisphere.

As mentioned above, the dust storm activity in the Atlantic usually ramps up in Spring. It is first more contained in the tropical regions, but reaching far to the west and southwest.

The aerosol analysis on March 5th, revealed a large dust cloud moving towards the west-southwest, with high dust concentration. Image is by ADAM – Earth explorer platform. 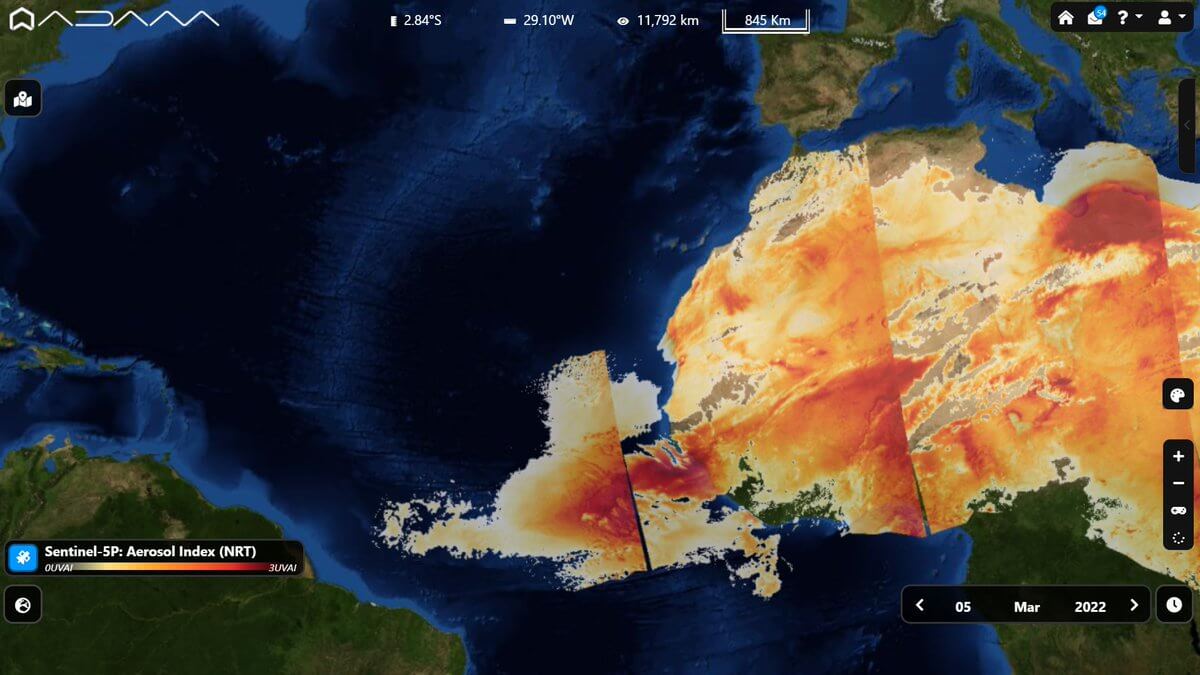 Real-time satellite imagery for the same day, March 5th, revealed a concentrated plume of dust, extending towards the west-southwest. The direction shows the dust cloud is being carried by the prevailing easterly trade winds.

Two days later, on March 7th, the far western edge of the dust cloud has reached South America, but the concentrations are reducing as the cloud travels west.

Studies have shown, that iron-rich particles inside these dust clouds reflect sunlight and can cool the atmosphere. The fine dust particles also reduce the amount of sunlight reaching the ocean, reducing the heating of the ocean surface, during the passage of the dust storm.

We produced a special graphic from the NASA GEOS data, which shows the dust column mass. Basically, it reveals the dust loading/concentration in the atmosphere. Higher values mean a stronger dust cloud.

The main plume was reaching more than halfway across the tropical Atlantic on late March 9th, with lower concentrations already on the South American coast.

The latest daytime satellite analysis shows continuous dust plumes from Africa, reaching towards the west. The image is from the NOAA GOES-16 satellite.

An atmospheric sounding shows the temperature, dew point, and winds with altitude. The latest sounding below is for the Cape Verde region, and it shows a very dry layer in the lower levels (black box). This is the easiest way to detect the Saharan air layer, as it is very dry.

This shows the low altitude of the dust layer, which means that it can drop out of the atmosphere sooner. The higher the dust layer reaches, the longer it can hold its high concentrations before “dissolving”, reaching further west.

We produced a video below, that shows the analysis and forecast of the current dust cloud event. It reveals several pulses of the dust mass being emitted from Africa, traveling west towards South America.

The persistent high-pressure system in the central Atlantic is the main steering mechanism for these dust storms. It powers the easterly trade winds that carry the dust clouds from Africa towards the west, sometimes reaching quite a large distance.

Currently, there is a large high-pressure system present in the North Atlantic, seen in the analysis image below. The wind barbs show the wind speed and the main wind direction at the 850mb level (~1.500m/5000ft). 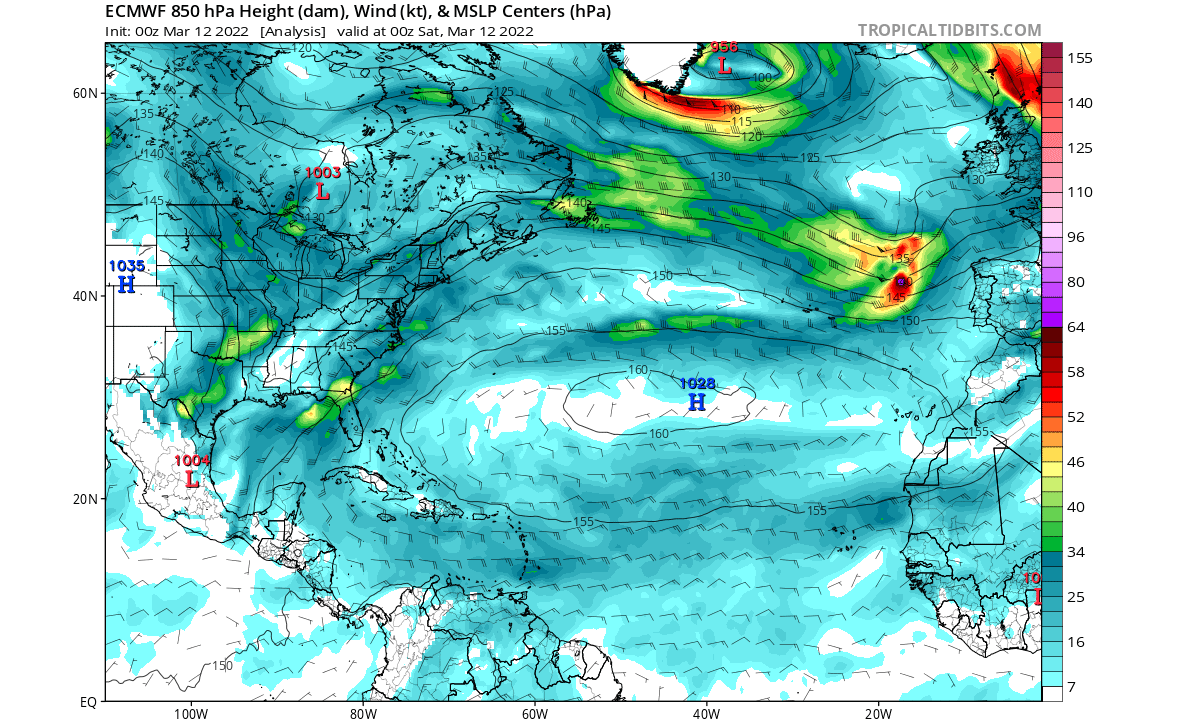 Sea level pressure anomaly shows this high-pressure system to be stronger than normal. Looking at the isobars (pressure lines) we can imagine where the winds blow from east to west over the tropical Atlantic Ocean.

Below we have the dust mass analysis from the NASA GEOS-5 modeling system. High concentrations of dust can be found in the main core of the dust cloud over Africa. The western leading edge is slowly moving higher concentrations towards the coast of South America.

The dust forecast from NASA for this weekend, shows higher concentrations reaching the coast of South America. A new plume is following behind.

Early next week, the high-pressure system will remain stable in the North Atlantic, with persistent easterly trade winds. You can see strong winds on the tip of Greenland, associated with a strong low-pressure system. 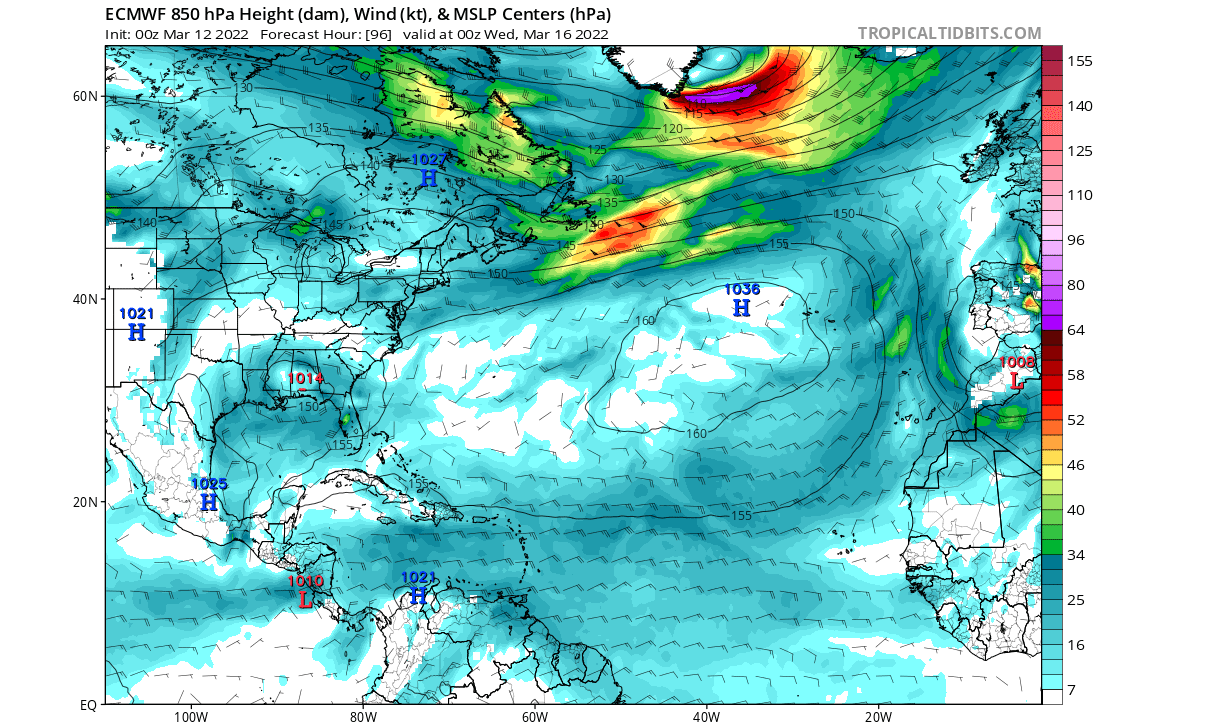 The sea-level pressure anomaly forecast reveals the strong and stable high-pressure system in the North Atlantic early next week. But we see a low-pressure area over western Europe, expanding down into northern Africa. 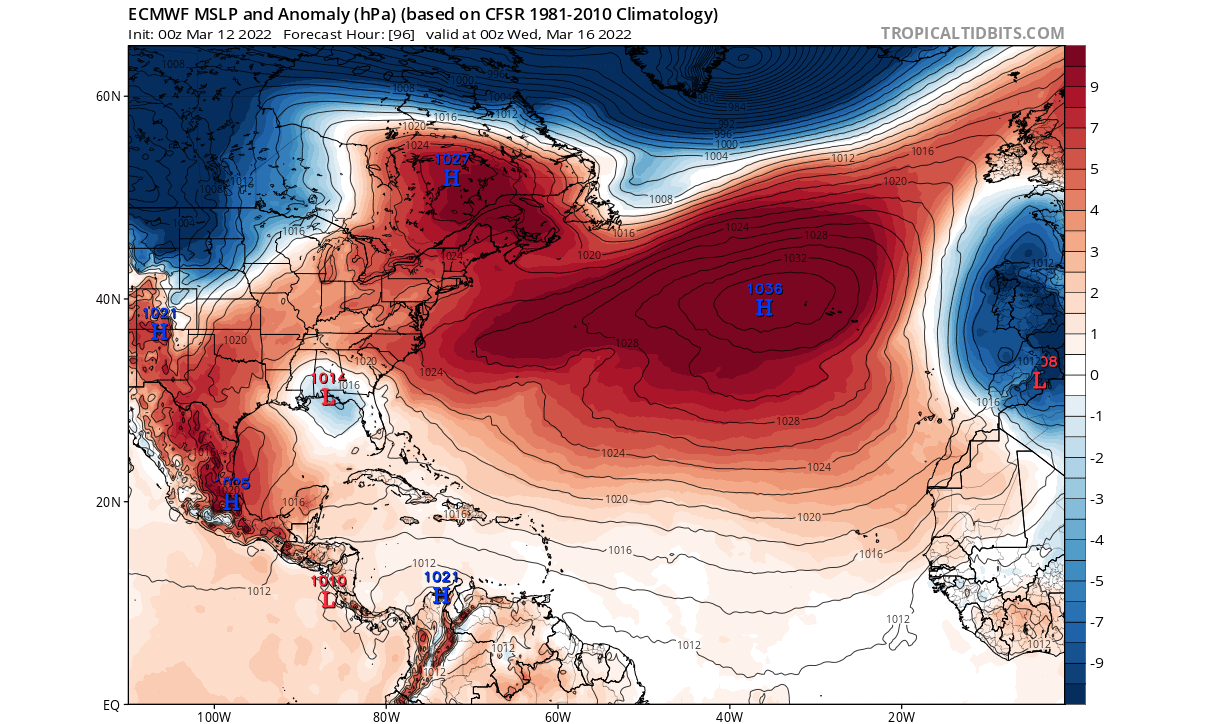 The dust forecast from the NASA GEOS-5 system shows higher concentrations of the dust plume now reaching into land over South America. But what is perhaps more impressive is a strong dust plume reaching into western Europe early next week.

That plume is being created by a low-pressure area over southwestern Europe, pumping up the air from the south, creating a strong dust plume. 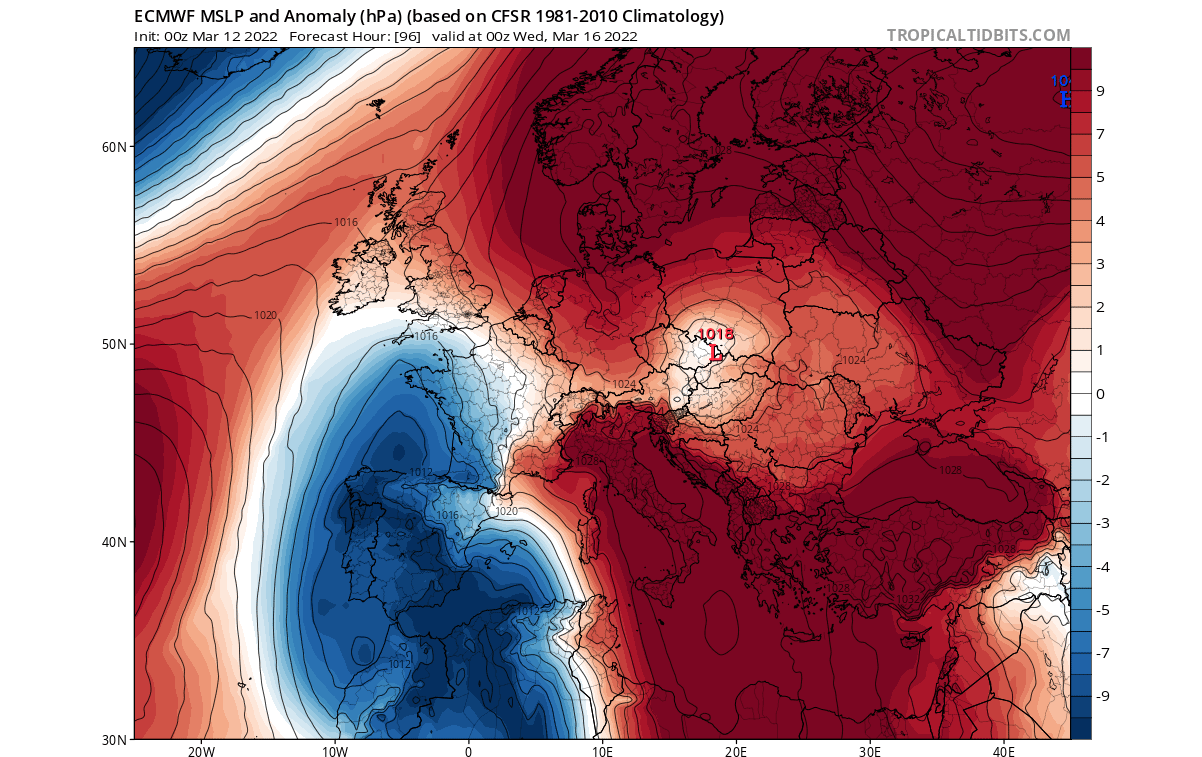 Later in the week, the dust transport will continue over the tropical Atlantic. And we can also see most of western and central Europe covered under a dust plume.

But by the end of next week, the high pressure in the North Atlantic will wane a bit. The current forecast for late next week shows the high pressure backing further west, with a temporary low-pressure area taking over the eastern Atlantic. 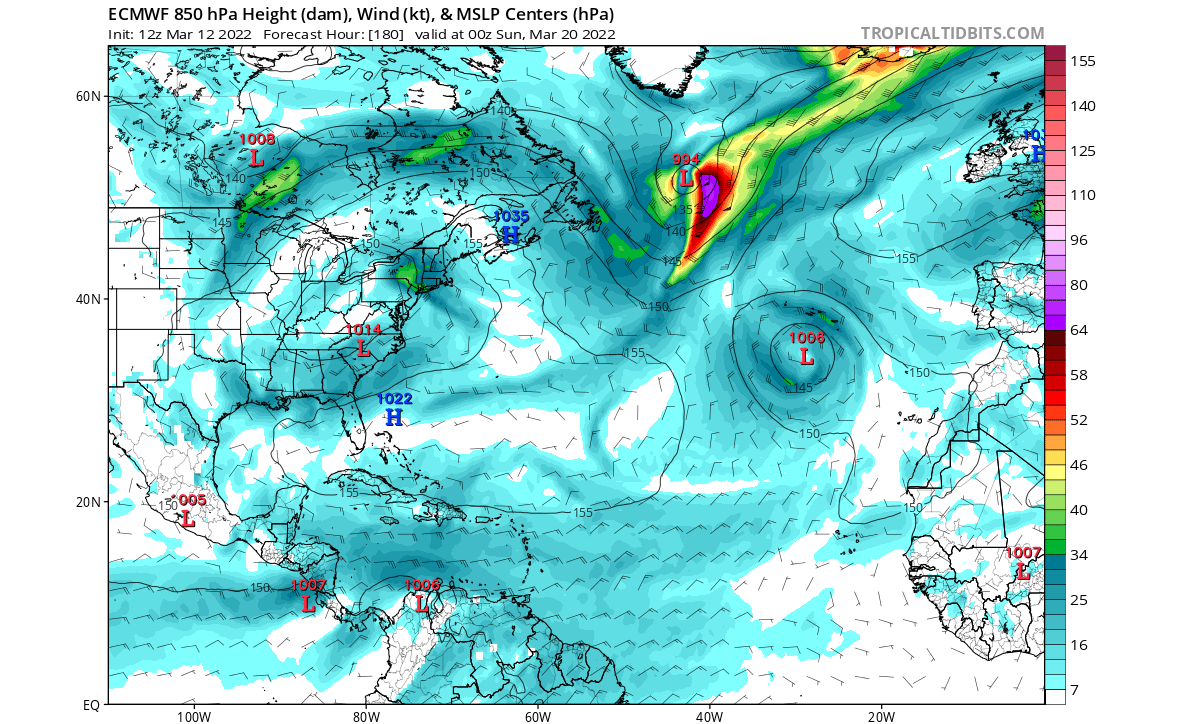 The sea-level pressure anomaly shows a more clear picture, with the high-pressure now more concentrated over the northeastern United States and eastern Canada. Meanwhile, a low-pressure area is changing the wind dynamics in the eastern Atlantic. 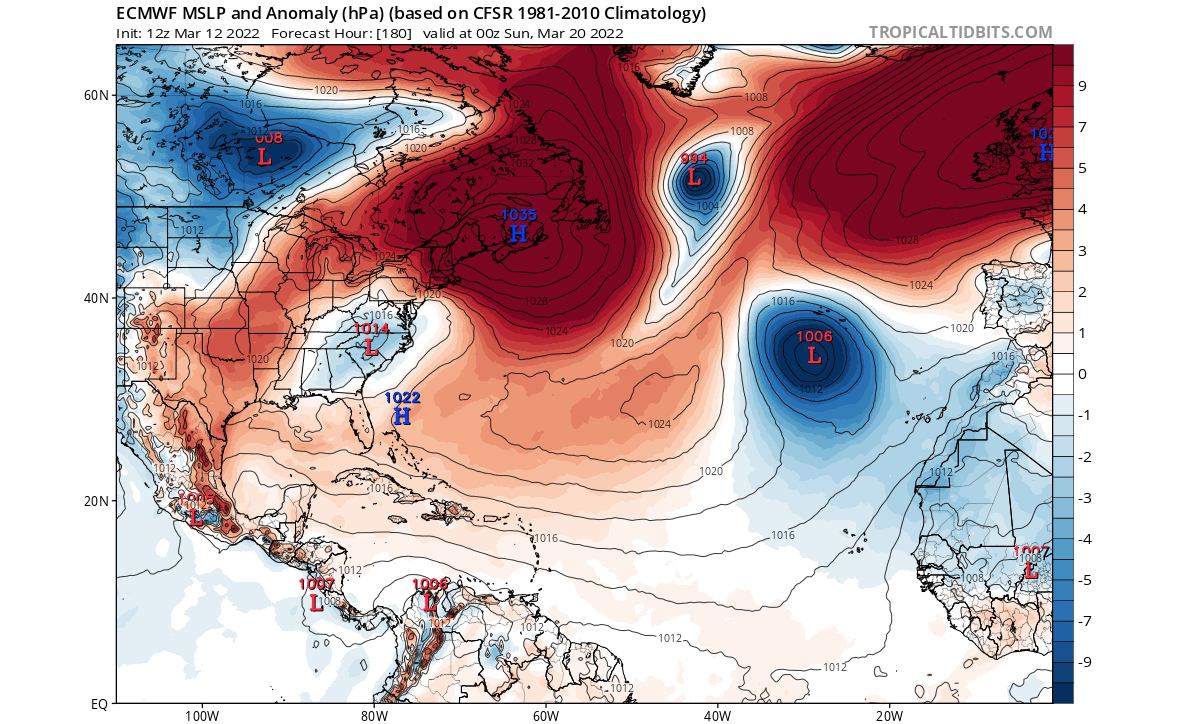 Looking at the dust forecast, we see the old plume over the tropical Atlantic, reaching inland over South America and the Lesser Antilles. The pressure pattern in the Atlantic at this point would not allow a larger new plume to emerge far to the west.

Looking at the low-level moisture forecast, we see the dry Saharan air extension out of Africa. But the weaker trade winds in the forecast do not allow a fast extension towards the west.

But this is just an entry-level dust cloud event. Larger events can occur during the summer and can reach quite far into the United States, as was the case in June 2020.

As mentioned above, a large dust event occurred in late June 2020. Below we have 3 images of this strong Saharan Air Layer event from that event. The first image below shows the view of the massive Saharan dust cloud over the Atlantic, as seen from the International Space Station.

The dust mass/concentration analysis from the NASA GEOS-5 system showed a high dust loading, as the Saharan air layer cloud reached the southeastern United States. The concentrations over the Gulf and gulf coast of the United States were twice higher than the current dust cloud in the Atlantic. 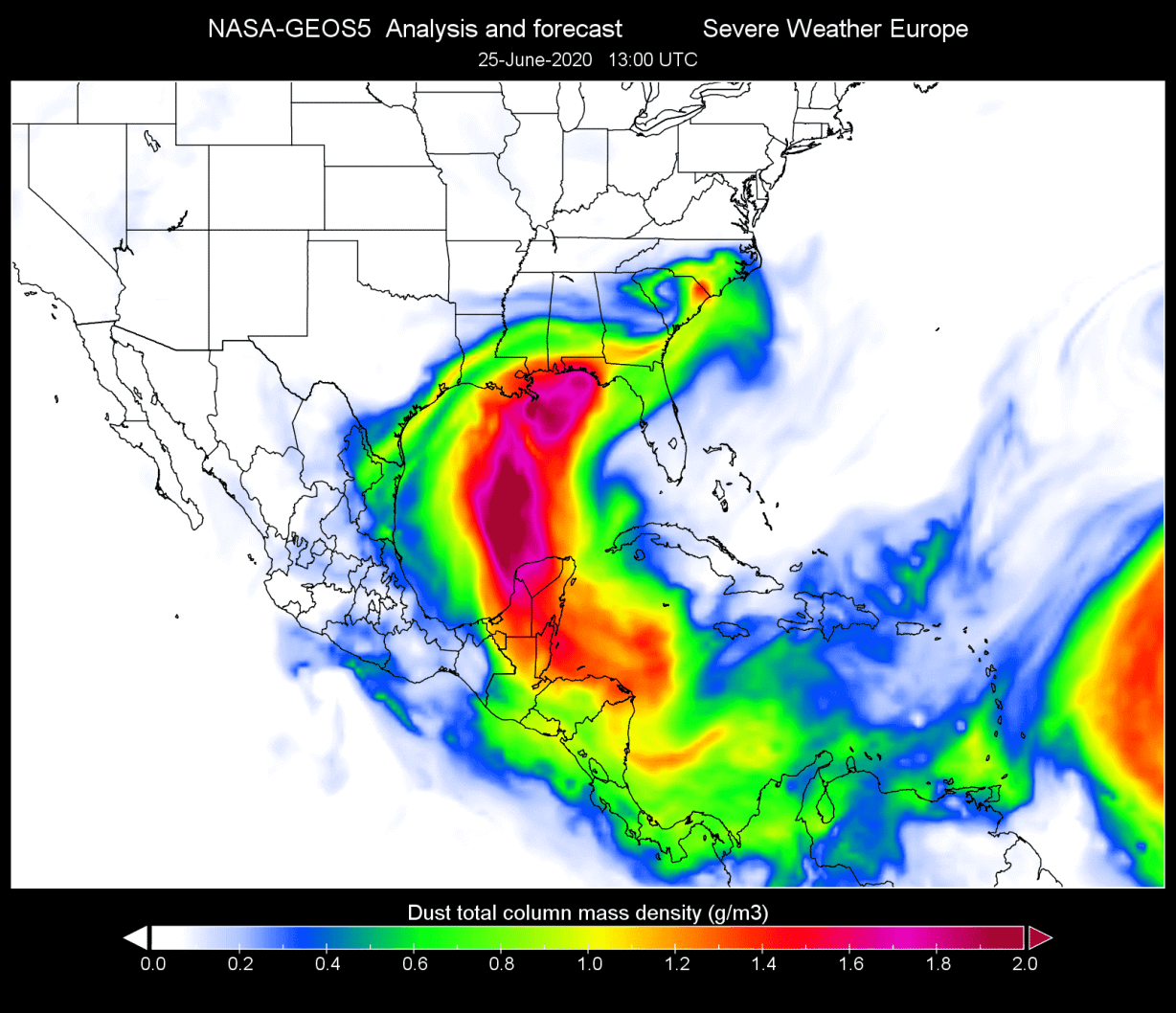 Large dust clouds can even cause a change in weather, as they typically bring drier and more stable air, which means less precipitation. Fine dust particles can also act as a natural fertilizer, so it is beneficial for the soil.

Saharan dust clouds also suppress tropical activity, which means a reduced risk for tropical storm development and landfall during its presence. Dust particles in the atmosphere also help to create beautiful, vivid sunrises and sunsets, as the dust particles scatter the sunlight.

SEE ALSO:
Record Cold with 40 °F below normal Temperatures to impact Southeast U.S. on Sunday, some areas even colder than Alaska