The stratospheric polar vortex is coming at us with a vengeance! It was under a lot of pressure lately and was fighting for its existence. Being attacked by many pressure and temperatures waves, it survived them all and is now ready to power up.

We were monitoring the stratospheric warming event as it was developing. The event did materialize and it will weaken the polar vortex. We emphasized in our updates that the warming phases must be persistent. That depends on their source, which is lower down, in the troposphere, where our weather is. The pressure changes there have become unfavorable to send more strong waves up into the stratosphere. Images (weatheriscool.com) show the current warming and the “anti-vortex” developing on the Pacific side. 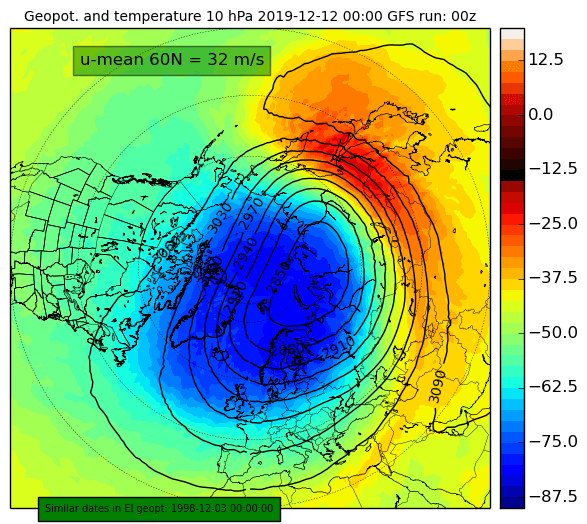 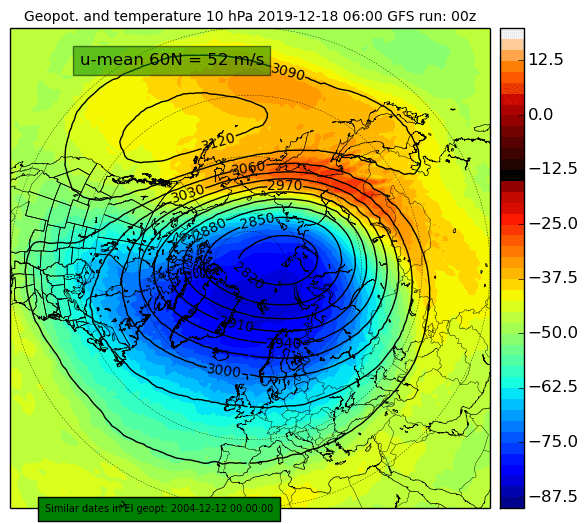 The warming will not be persistent enough to cause more severe damage to the polar vortex. It will run out of fuel, with the Pacific anti-vortex also weakening and making room for the polar vortex to grow. 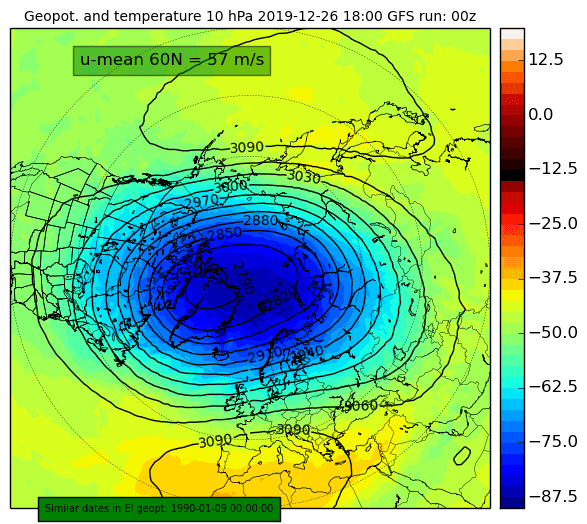 We can track the current pressure waves as they moved from the higher levels down through the stratosphere, reaching the lower levels. At the same time, lower pressure is appearing again at the top of the stratosphere, trending downwards, as the vortex re-organizes. 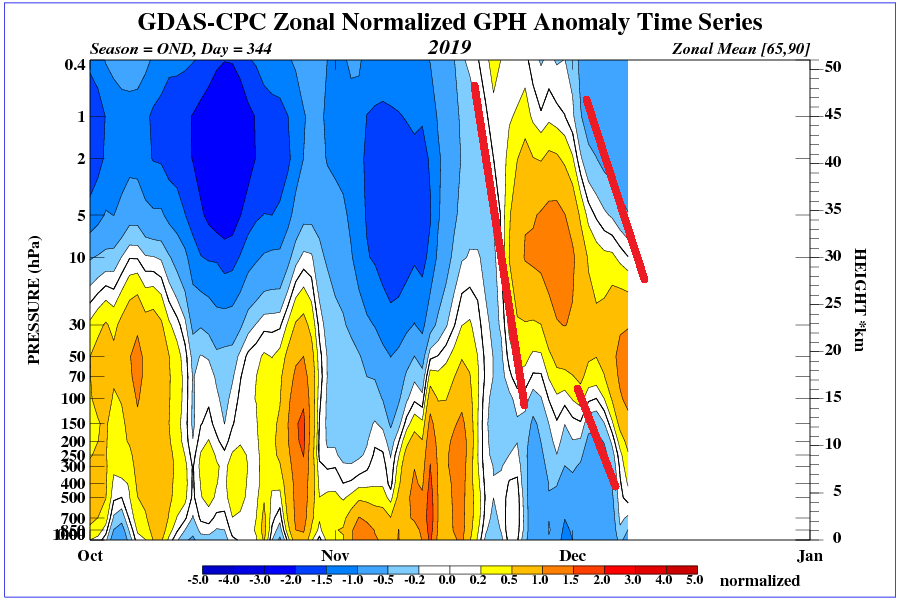 The stratospheric polar vortex, now spinning, will gather strength and start to cool. Colder the polar vortex gets, the stronger it is. Temperature in the very core is expected to drop to below -90°C, which is near the lowest that it was reached in any December. Stratospheric polar jet stream will reorganize and spin around the hemisphere, with wind speeds over 300km/h. 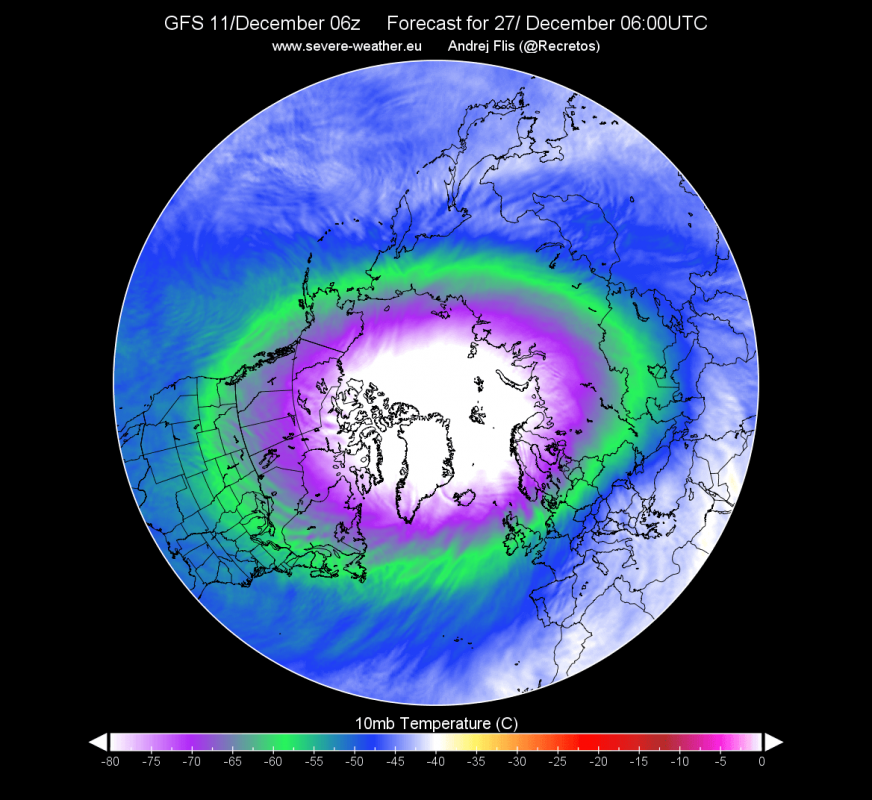 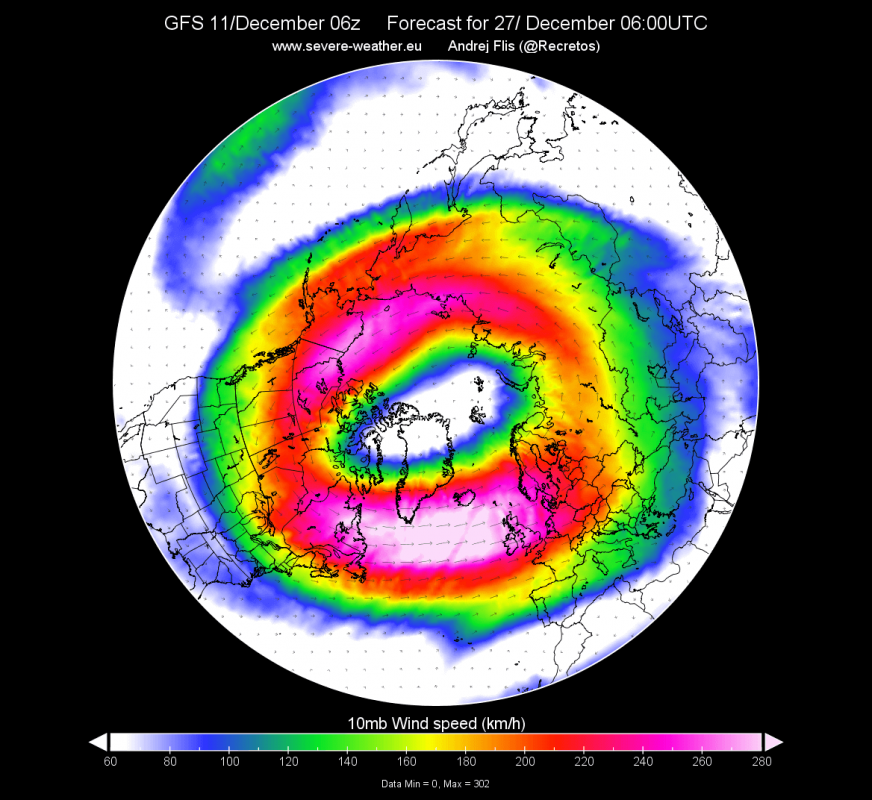 The stratospheric jet stream will reach close to the 40-year record strong values. Ensemble guidance also supports the strengthening, with no further warming phases currently forecast. Graphic below shows the GFS/GEFS forecast of the stratospheric jet stream at 10mb (~30km altitude). Second graphic shows the strength of the polar vortex in the lower stratosphere at 100mb level (~15km altitude). We can see the current weak vortex, but the forecast shows the gradual strengthening at lower levels as well. 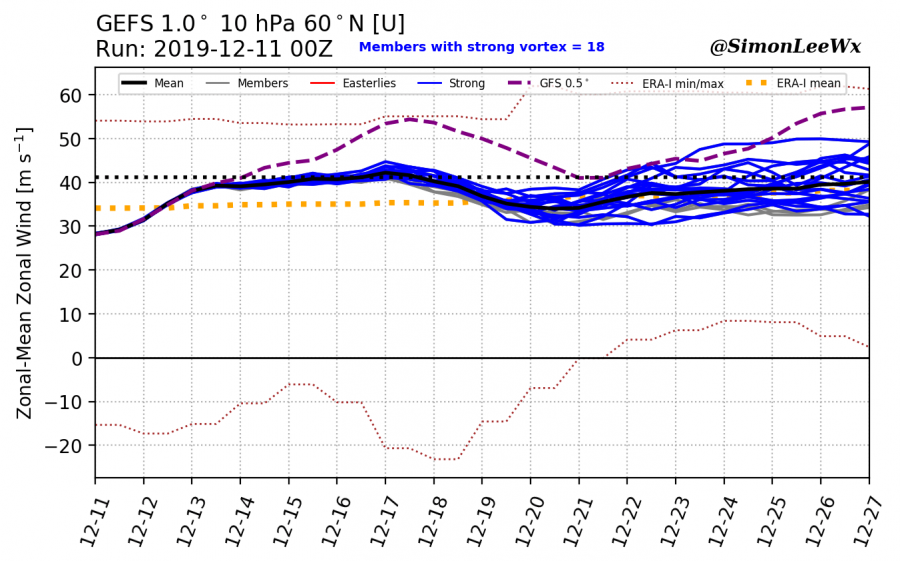 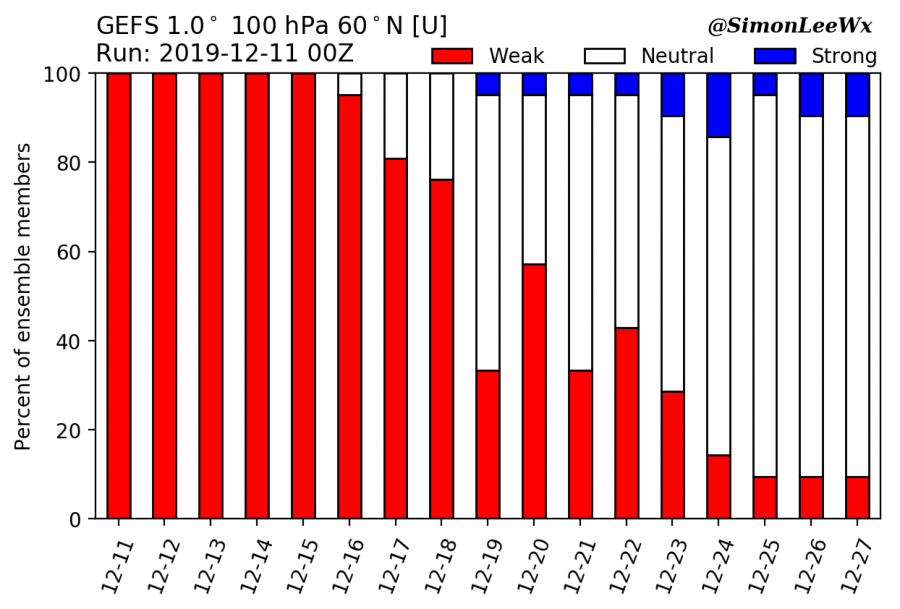 If we look at different altitudes from 10mb (30km) down to 150mb (12km), we can notice the power-up starting in about 10 days. It is clear that the effect from the stratosphere is filtering down to the lower levels. This means that the upcoming power-up phase will also influence our weather. 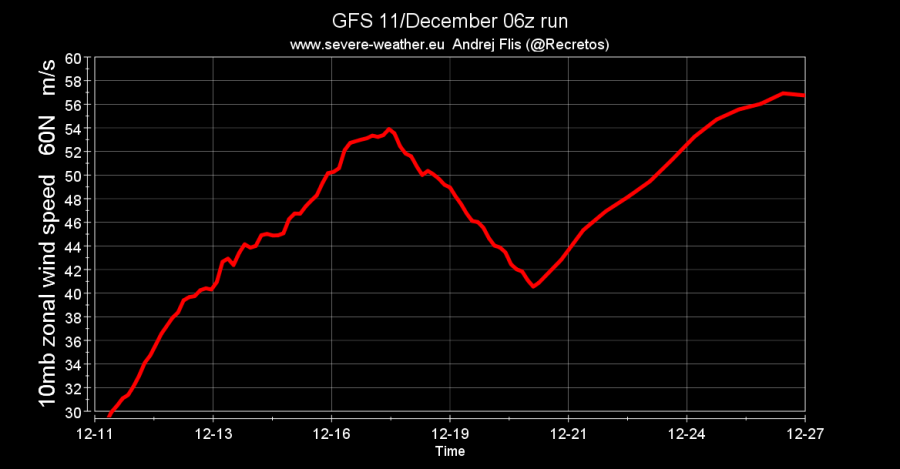 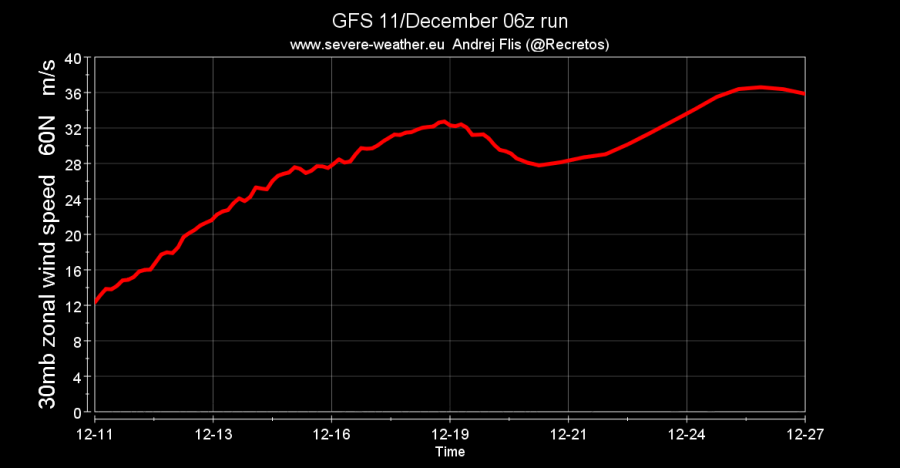 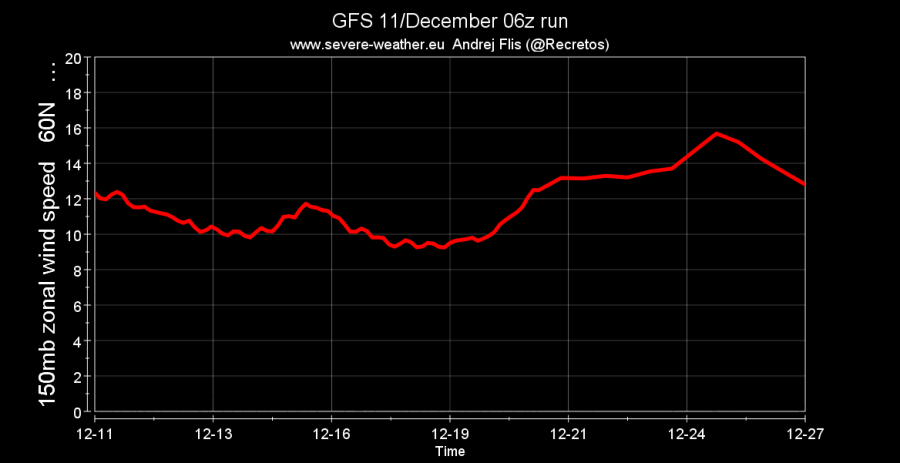 What all this means for our weather?

The stratospheric polar vortex will survive all the warming/pressure attacks. The warming was not persistent enough to collapse the vortex. It will now start to power-up, getting colder and spinning faster. Polar vortex will spin faster in the higher levels first, and then powering downwards, like a tornado. Eventually, it will influence the lower levels. The effects will not be seen immediately, but the sign to look for is lower pressure in the North Atlantic ocean and over the North pole. Mid to late December is expected to bring mild weather across Europe and central parts of the United States, influenced by these dynamics. 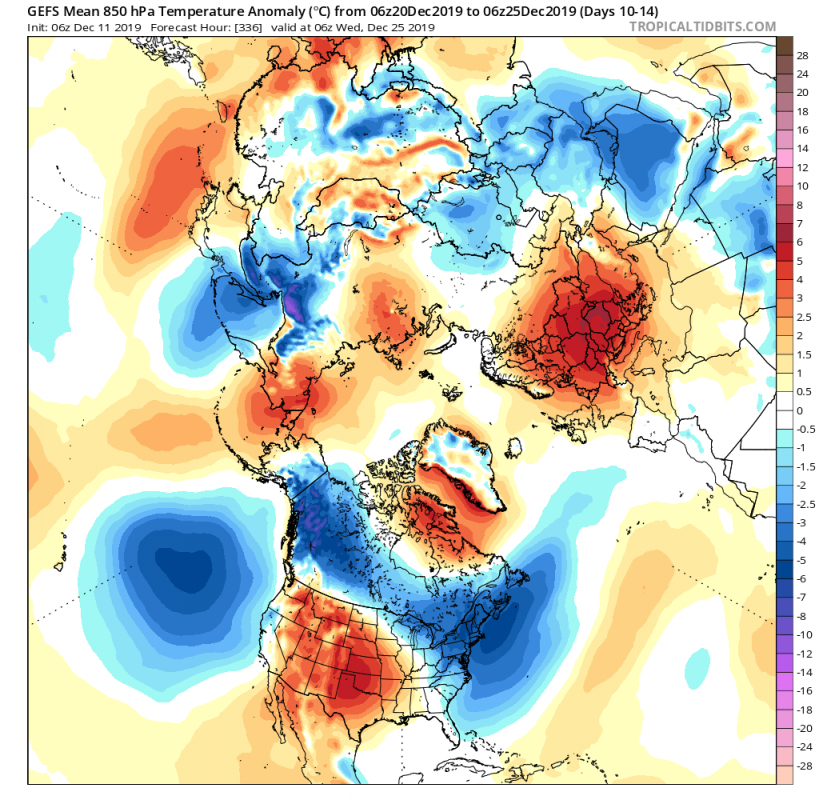 The main effects are expected to be felt in late December and more in January, as the current long-range forecasts show. This would mean milder weather in Europe and the central United States. Transitional cooling is still likely with passings of cold fronts. But overall, the pattern looks to be milder, exactly like the long-range forecast showed in autumn. The CFSv2 forecast below shows the positive NAO pattern, which is generally unfavorable for colder winter weather over Europe and parts of the United States. Brief colder episodes are always likely, but the overall pattern does not look supportive for long periods of cold and snowy weather for now. An exception is perhaps the NW United States and E/SE Canada. This means that white Christmas is less likely for Europe and parts of central and east United States.

We will keep you updated on any important further development. While you wait for more updates, make sure to check out the full 365-day animation of Atlantic ocean currents, seasonal cooling, and warming, and tropical systems leaving cold trails in the warm tropical waters: