A new winter storm is forecast to move across a large part of the United States and disrupt the New Year’s Eve celebrations for millions across the country. A frontal system emerging along the Gulf Coast will travel across the Midwest into the Great Lakes, bringing dangerous ice storm and a lot of snow along its path for the start of New Year 2021. Severe storms with tornado threats will hit the Lower Mississipi Valley and Gulf Coast.

While parts of the Midwest were severely hit by an ice storm and deep snow in the early days this week, there was already another wave developing on the deep South. This wave is now deepening and a dangerous winter storm will emerge across the United States through New Year’s Eve and continue into the first day of 2021.

There will be an ice storm along its track, as well as locally quite a deep snowpack, but also severe weather with an enhanced threat for tornadoes and damaging winds along the Gulf Coast and parts of the Southeast United States on both Friday and Saturday.

The first 2021 winter storm update: millions under winter and ice storm warnings across the Midwest, storm heads into the Northeast United States tonight

******
The amount of ice accumulation could become damaging in some areas as up to around 1 inch (2-3 cm) of ice thickness will locally accumulate.

Major cities along this narrow zone, stretching from central Texas across the Midwest into the Northeast United States and Southeast Canada will be affected by both freezing rain and heavy snow potential. Including Oklahoma City, Kansas City, Chicago, Detroit, New York, and Toronto.

Millions are in this zone of wintry mix weather coming up over the next 48 hours and can expect travel disruptions and also power outages caused by severe weather hazards.

WINTER STORM EMERGING FROM THE SOUTH

A new frontal system is shaping up over the deep South and is forecast to gradually move northeast into the Mississippi Valley through New Years’s Eve and tonight. While the high-pressure system is established across the Northeast United States, a combination of both favor cold air mass maintaining near the surface. 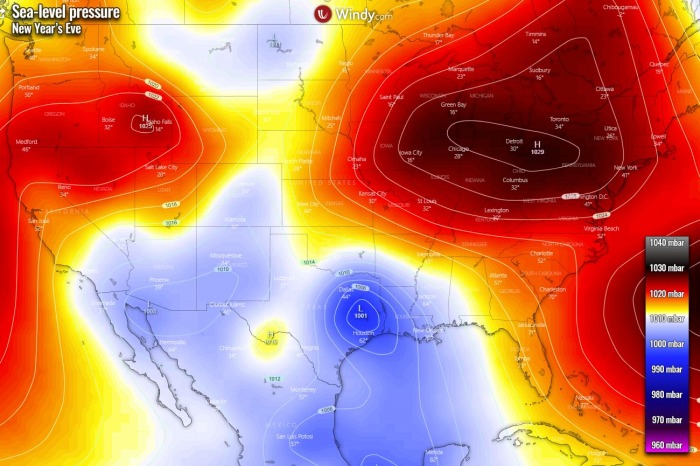 This means that, with the arrival of the frontal system closer, its warm advection will introduce dangerous conditions with a narrow swath of favorable environment for freezing rain and ice storm to develop.

It will be raining to the south of the warm front and indeed heavy snowing to the north of it. 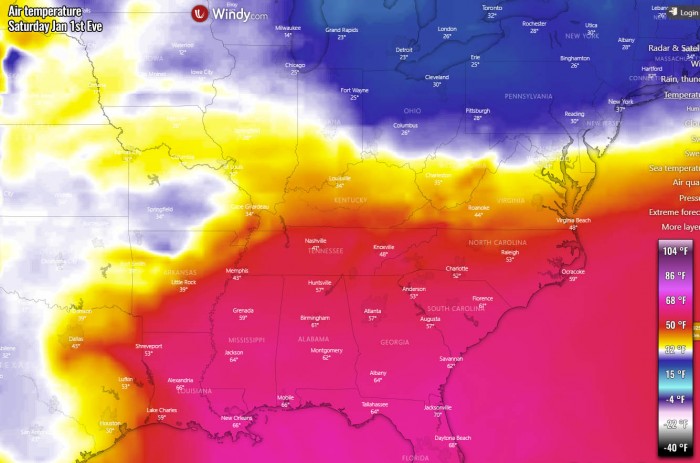 The fronts will be gradually moving northeast tonight into Saturday morning. In its wake, precipitation will all turn back to snow as cooler temperatures spread from the north.

Heavy freezing rain will develop from central Texas across Oklahoma into eastern Kansas through New Year’s Eve, then spreading northeast across the Midwest into Jan 1st morning.

A precipitation type is indeed strongly related to the exact position of the frontal boundary where freezing rain, snow, or just rain will occur. 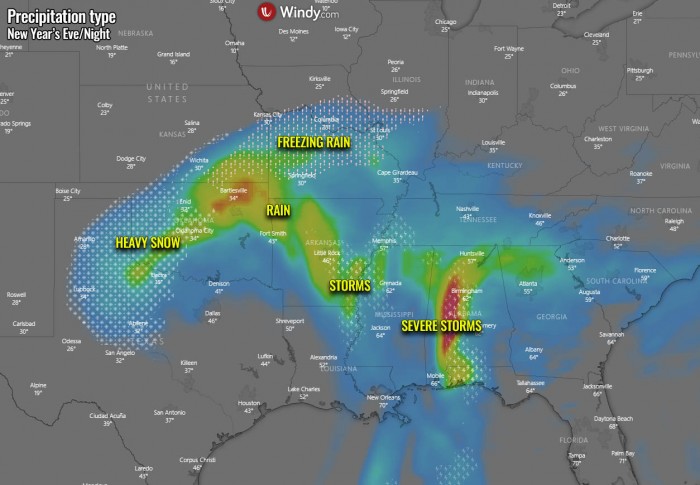 Nevertheless, an increasing potential is definitely in a place that the wintry conditions will develop along with the frontal system.

Once we enter the New Year 2021, the frontal system will continue further northeast into the Great Lakes and Ohio Valley, reaching the Northeast United States and southeast Canada for Saturday evening and night hours. 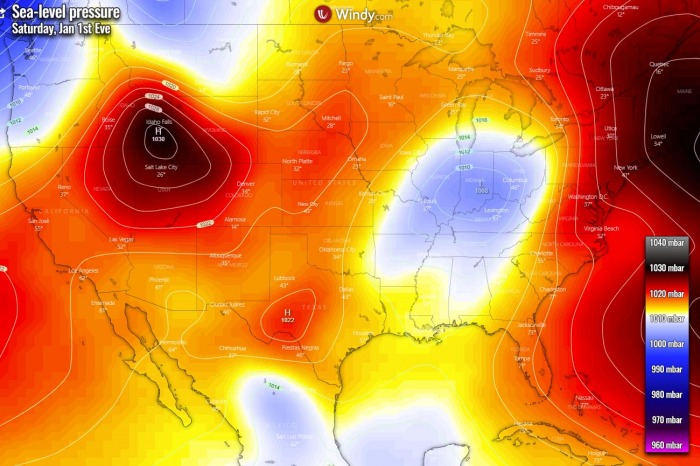 While the surface low is weakening along with its progress further northeast, the frontal system will remain very active, additional winter weather is forecast to deliver snow and ice along the system’s track. 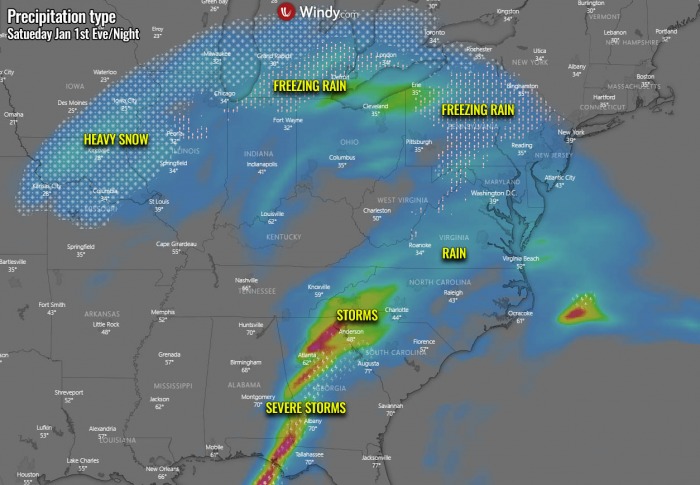 There will be freezing rain possible from Illinois, including the city of Chicago, across southern Michigan and further east across Pennsylvania into the Northeast US with a decent amount of ice coating, becoming dangerous for travels and even damaging to trees and power lines.

Power outages will be possible. 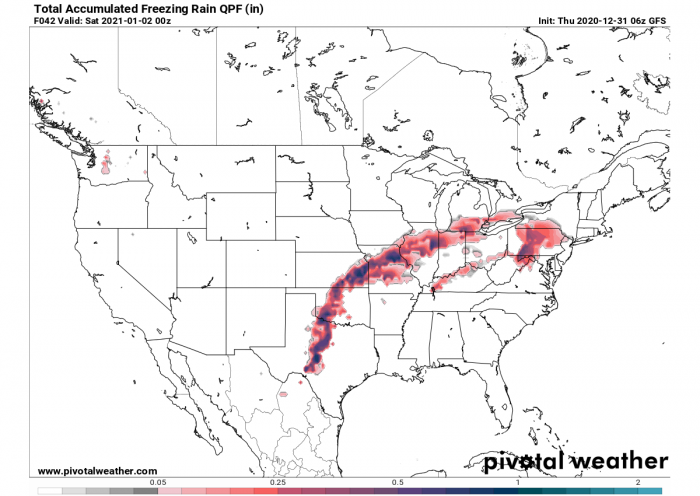 Heavy snow will develop to the west of the front across northern Missouri, southern Iowa, northern Illinois into Michigan, and further northeast where warm advection will not reach north enough to favor freezing rain.

Storms, including severe storms, will be ongoing along the cold front, moving across the Southeast United States. A squall-line with embedded supercell storms and tornado threat will likely develop there.

SEVERE STORMS WITH TORNADOES FOR THE SOUTH

Severe storms with an enhanced tornado threat will develop from far southeast Texas across southern Louisiana and Mississippi into Alabama and Florida Panhandle tonight. 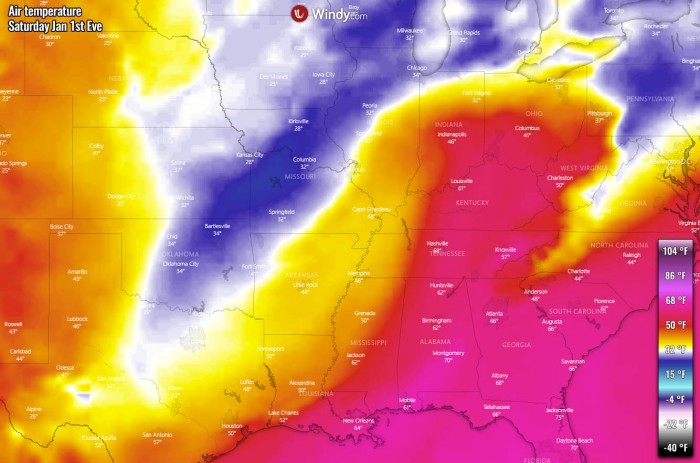 According to the Storm Prediction Center (SPC), severe thunderstorms, including potential for tornadoes are possible today through tonight from southeast Texas into the lower Mississippi Valley and the central Gulf Coast States:

A cold front will stall from the TX coastal area through northern LA and central MS. This boundary might advance slightly northward as a warm front or remain stationary through a portion of southeast TX and the lower MS Valley today into the evening. Cyclogenesis will commence along the front near the central TX coast later this morning. This cyclone will subsequently develop northward through east TX within the corridor of deep forcing for ascent associated with a northward-ejecting shortwave trough. 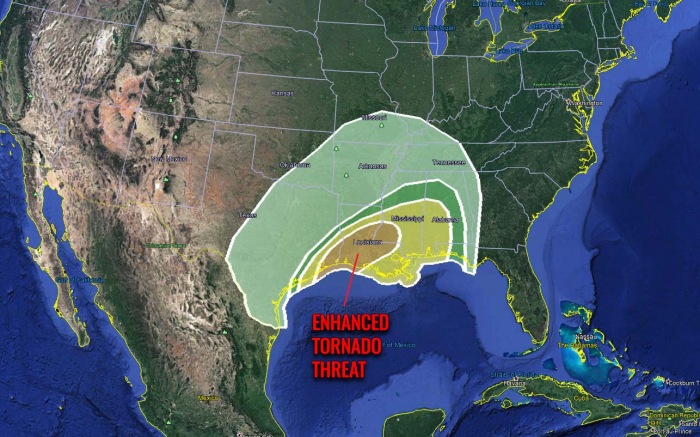 A moist warm sector will reside south of the front with mid to upper 60s F dewpoints from southeast TX into southern LA and MS. However, widespread clouds and weak lapse rates will support only a modest thermodynamic environment with MLCAPE from 500-1000 J/kg. Deeper forcing for ascent will begin to overtake the western portion of the warm sector across southeast TX later this morning. This will result in more robust thunderstorm development in the vicinity and east of the developing surface low near the central TX coast and southward along the cold front into the western Gulf.

A subtle warm front will move onto the central Gulf coast later today. The boundary layer will moisten with dewpoints increasing to the mid to upper 60s F. Showers and thunderstorms are expected to gradually increase and develop northward through the evolving warm advection regime later today into the overnight. Primary severe threat is expected during the evening and tonight as low-mid level winds increase downstream from the shortwave trough that will remain well west of this region.

Hodograph size will increase substantially overnight, along with effective bulk shear supporting the potential for a few supercells. The deeper forcing for ascent will remain west of this region, and most storms might remain slightly elevated given the most favorable wind profiles will evolve overnight. Nevertheless, the environment will support a supercell/tornado threat, assuming updrafts can root in the boundary layer.

HEAVY RAINS FOR THE GULF COAST, DEEP SNOWPACK ALONG THE FRONT

Much warmer air mass coming from the warmer tropical region of the Gulf of Mexico will contain high moisture, so storms will also introduce heavy rain threat for parts of the Gulf Coast and the Southeast United States.

Up to 4 inches (100 mm) of rain could accumulate from eastern Texas into the central Mississippi Valley and along the Gulf Coast from Louisiana to Florida Panhandle. Local flooding could occur. 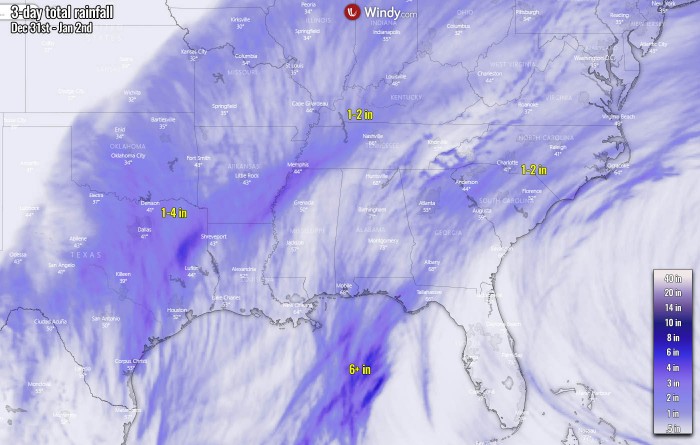 Other areas could receive 1-3 inches (25-75 mm) of rain over the next three days, but the rainfall threat should not be of any significant danger.

A more impressive chart is the amount of accumulated snow along with the moving frontal system. There is a narrow swath with a reasonable snowpack, extending from northern Mexico across western Texas and Oklahoma further northeast into Kansas, northern Missouri, and Illinois. 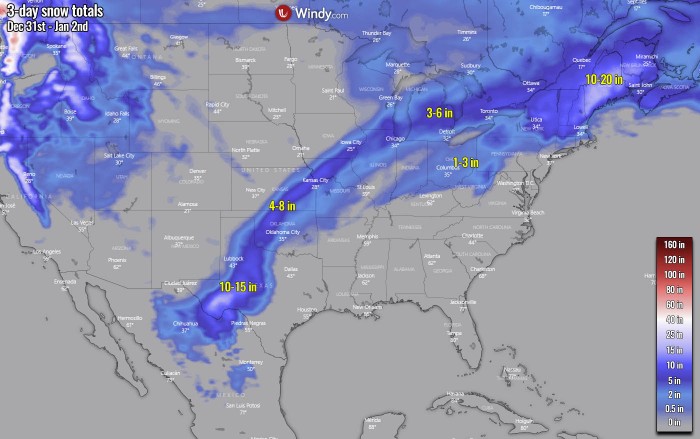 Roughly 3-8 inches (10-20 cm) of snow will be possible along with this narrow band. Some impressive amounts are expected across western Texas, as warm advection will deliver high moisture there but will not bring enough warm air aloft to support freezing rain.

So it will be heavy snow there and 10-15 inches of fresh snow could accumulate through New Year’s Eve and tonight, quite an impressive amount for the region.

Another area with an enhanced amount of snow is across New England, especially across Maine. There, the effect of a re-strengthening surface frontal system will result in heavy snowfall intensity and up to 20 inches (50 cm) of snow is possible until the end of the weekend!

What is freezing rain and sleet?

The freezing rain forms when a layer of warm air aloft is placed above a layer of below-freezing (subfreezing) air at the surface. Snowflakes that falling towards the ground, melt as they fall through this warm layer. 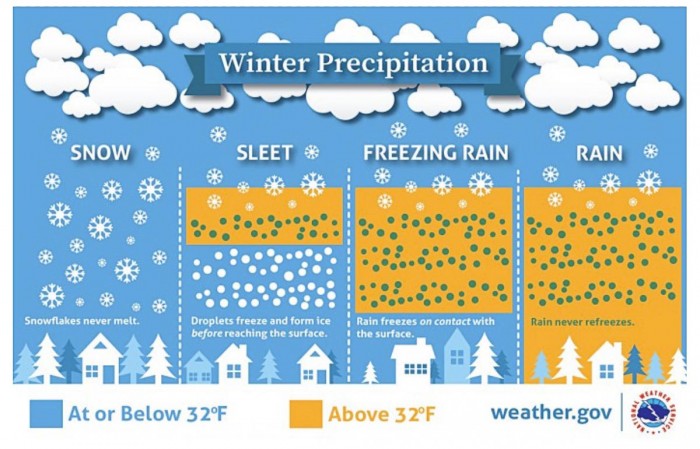 If the flakes are completely melted, then it is falling as rain towards the ground which is much colder. This liquid droplet then freezes on contact with exposed surfaces.

Sleet or ice pellets are a form of precipitation consisting of small, translucent balls of ice. Ice pellets are smaller than hailstones and are different from graupel. Ice pellets often bounce when they hit the ground or other solid objects (e.g. jackets, windshields, and dried leaves). They generally do not freeze into a solid mass unless mixed with freezing rain.

2020 will end with a spectacular “Day After Tomorrow” extratropical event, as one of the most intense North Pacific storms on record heads straight for the Aleutian Islands

Happy New Year 2021 from our team and stay safe! We appreciate your support and as always, we will keep you updated with all potential hazards coming up!