This is an update on the ongoing massive winter storm with a dangerous ice storm and a snowstorm moving across the Midwest and Great Lakes, gradually spreading wintry precipitation and glaze towards the Northeast United States. Millions are under the Snow, Ice, and Blizzard Warnings as the storm continues across the country on this first day of New Year 2021.

A very active winter storm across the United States is underway over the Midwest, forecast to continue towards the Northeast tonight. The storm has emerged in the southern Plains on New Year’s Eve, moving northeast as 2021 starts. Heavy snow and a narrow swath of freezing rain and ice storm are underway today. 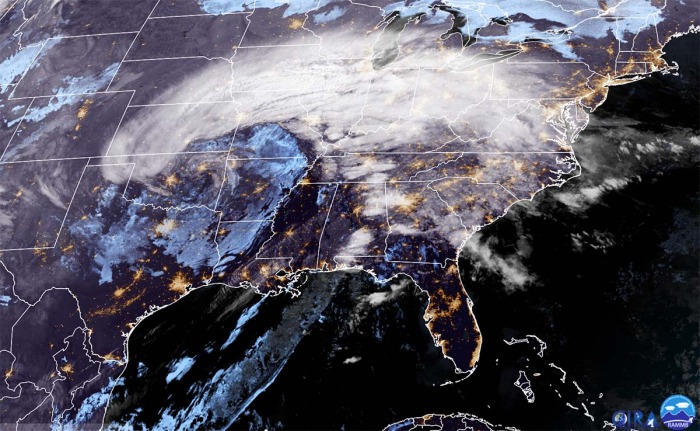 On the northwest flank of this storm system, a swath of heavy snow and ice storm are expected to continue from the Midwest United States this evening and gradually expand into the interior Northeast tonight into early Saturday. A strong surface low-pressure system is forecast to move through the central and eastern portions of the country with numerous weather-related hazards during the next 48 hours.

Snow Warning, Ice Warning, Blizzard Warnings, and Winter Weather Advisories are in effect from the Midwest to the southern Great Lakes region into the Northeast United States. 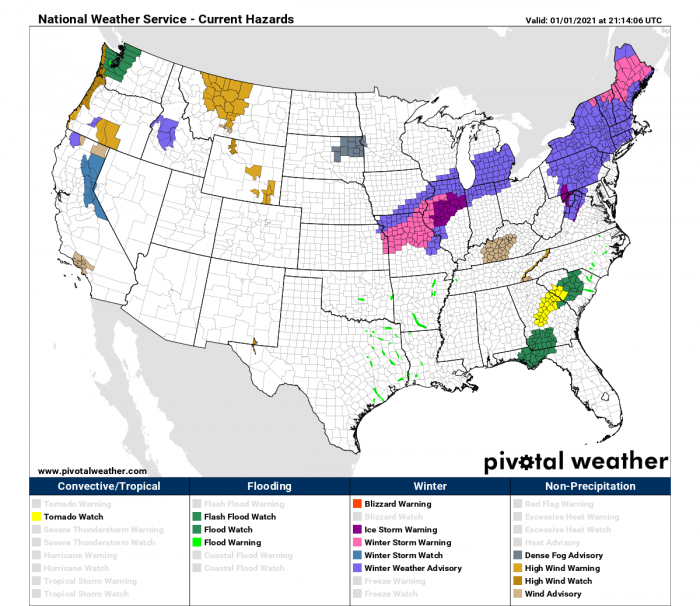 The amount of ice accumulation could become damaging in some areas as up to around 1 inch (2-3 cm) of ice thickness will locally accumulate. Expect travel disruptions and also power outages caused by severe weather hazards.

As the low advances off toward New England and intensifies on Saturday, heavy snow is forecast for the interior sections there before the system moves away into the Canadian Maritimes on Saturday night. Another low-pressure system is forecast to bring more wintry precipitation across the Northeast through Sunday morning.

Here is an impressive satellite animation of the winter storm evolution across the United States, starting earlier on Thursday, intensifying through New Year’s Eve into the first day of 2021. Attached are mid-level water vapor and geocolor satellite channels by GOES-16, provided by NOAA:

Millions are under the effect of dangerous wintry weather hazards, including the major cities across the Midwest into the Northeast United States and Southeast Canada today into Saturday. Cities from Kansas City to Chicago, Detroit, Toronto and Montreal will be affected by both freezing rain and heavy snowstorms.

Severe blizzard with very heavy snow is expected across parts of New England (US) and Nova Scotia (Canada) on Saturday night into Sunday.

The winter storm has been intensifying overnight into the first day of 2021 and the center of the surface low is progressing into the Ohio Valley and southern Great Lakes region. While the high-pressure system across New England keeps the near-surface temperatures low, very warm air mass advection is creating a dangerous wintry mix precipitation environment.

A much warmer air mass is spreading into the Ohio Valley from the south. Note: We use the 925 mbar level here to represent the low-level warm temperature advection behind the warm front, stretching from Midwest across the southern Great Lakes region towards the Mid-Atlantic region. 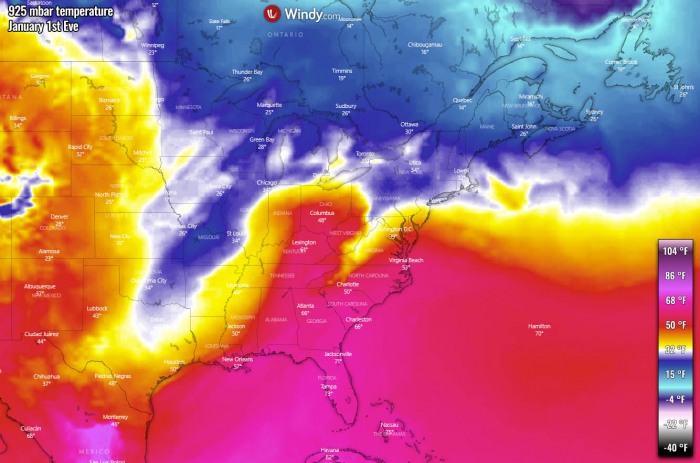 Colder weather is spread behind the cold front from northern Illinois into Missouri and Oklahoma, so all remaining precipitation is now falling as snow. The high threat for freezing rain and dangerous ice storm will continue across central Michigan and also across parts of Pennsylvania, western New York, and northern New Jersey this evening into tonight. 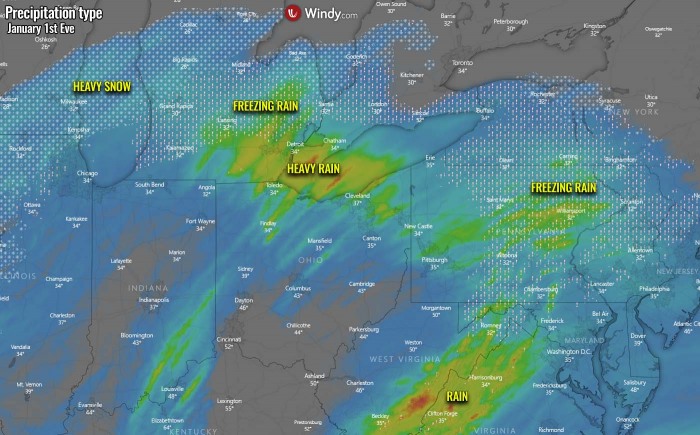 Rain/Freezing rain is finally changing back to snow across northern Illinois and Missouri, while heavy rain will spread across Lake Erie, northern Ohio and southern Michigan this evening. Significant ice accumulations are possible over portions of central Illinois, resulting in tree damage and also power lines. Travels will be disrupted as both black ice and snow will maintain very dangerous driving conditions. Be prepared for possible power outages. 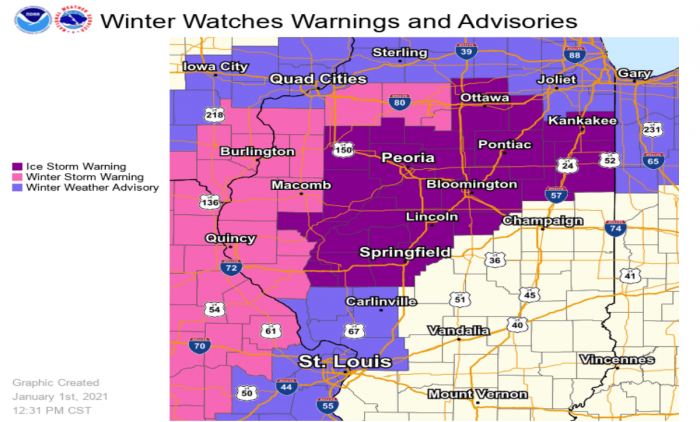 Light freezing rain will continue through much of the day along and west of the Interstate I-55 corridor. Within the Ice Storm Warning, 0.25 to 0.40 inches of total ice accumulation is expected, with up to an additional 0.10 inches possible into the evening hours. 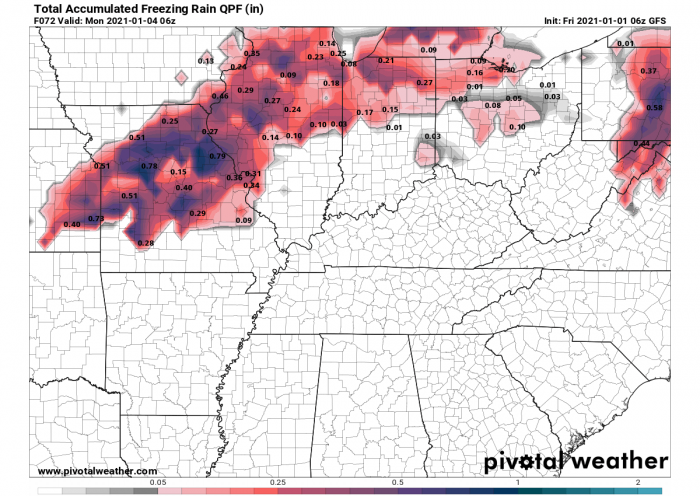 Elsewhere, a glaze of ice under a quarter inch will slowly melt off today as warmer temperatures spread in from the south. Snow Warning, Ice Warning, Blizzard Warnings, and Winter Weather Advisories remain in effect from the Midwest to the southern Great Lakes region into the Northeast United States.

With the night progress, both heavy snow and ice storm potential will spread east. The freezing rain across central Michigan will finally turn to snow as colder air mass arrives from the west. But heavy freezing rain will spread into southern Ontario. 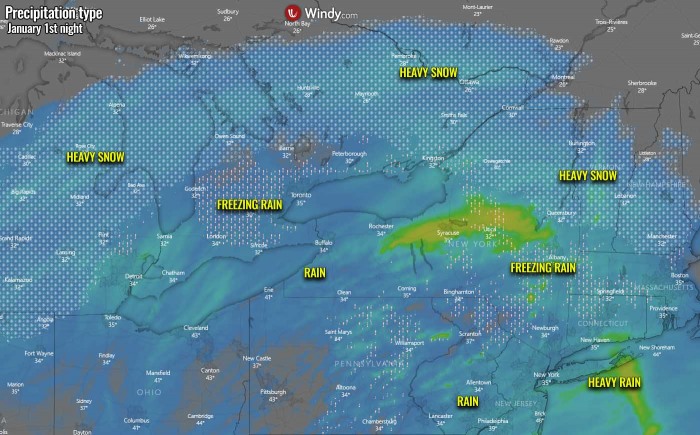 As well as continue further east across the western portions of the Northeast United States, over eastern New York and parts of Connecticut and Massachusets. Warmer air mass should limit freezing potential in western New York state. Heavy rain will spread across Long Island. Snowfall will spread to the north of Lake Ontario and become heavy snow into Vermont and New Hampshire.

WINTER STORM CONTINUE INTO THE NEW ENGLAND ON SATURDAY

The upper-level ridge and surface high-pressure system developing over the central United States will deliver improving weather conditions as Saturday arrives. The surface High over New England moves off to the Northwest Atlantic. So, the surface low and the winter storm will continue across the Northeast and New England while pressure begins deepening. 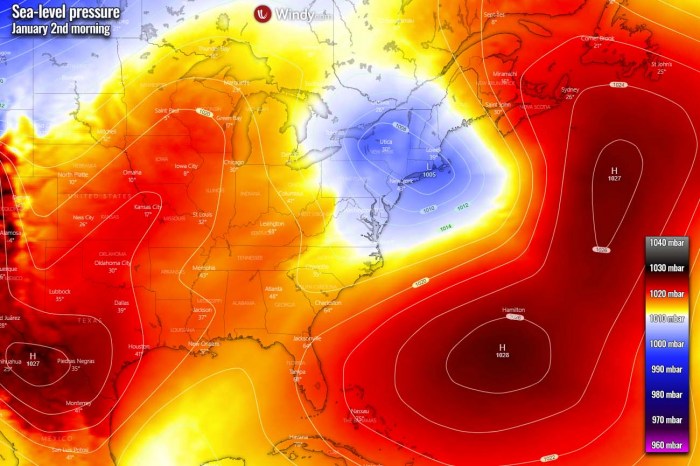 As the low moves towards the northeast, much warmer air spreads from the Southeast United States and the Mid-Atlantic region, including New York. Further west and north, colder air mass spreads east across the Midwest and the Great Lakes. 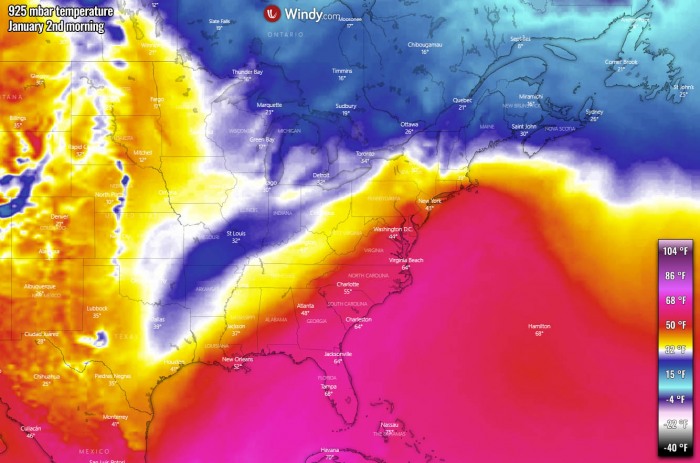 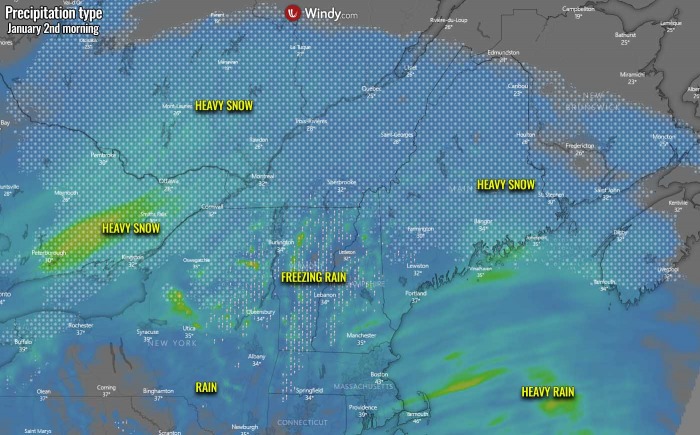 Some freezing rain enhances the ice storm potential across Vermont and New Hampshire. Attached below is the total 3-day accumulated freezing rain across the Northeast United States from this Friday over the weekend. The highest ice storm potential with the big amount of ice is possible across Pennsylvania, New York, Vermont, and New Hampshire states. 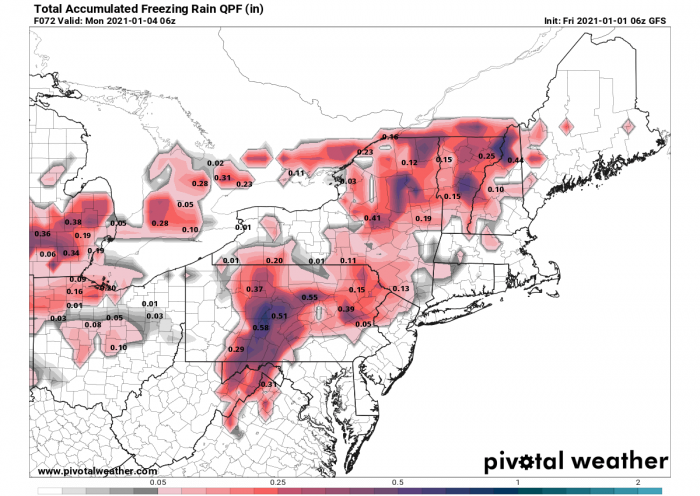 A precipitation type is strongly related to the exact position of the frontal boundary where freezing rain, snow, or just rain occurs. Nevertheless, the potential remains for dangerous weather conditions to develop, disrupting travels and also causing damage to trees or power lines. Power outages will also be possible.

While conditions finally improve towards Saturday evening across a large part of the Northeast United States and southern Ontario, it gets worse across New England into Canadian New Brunswick and Nova Scotia. The surface low will be deepening significantly into the upper 980s while drifting east-northeast along the southern New England coast, so both warm/moisture advection and winds increase over the region. 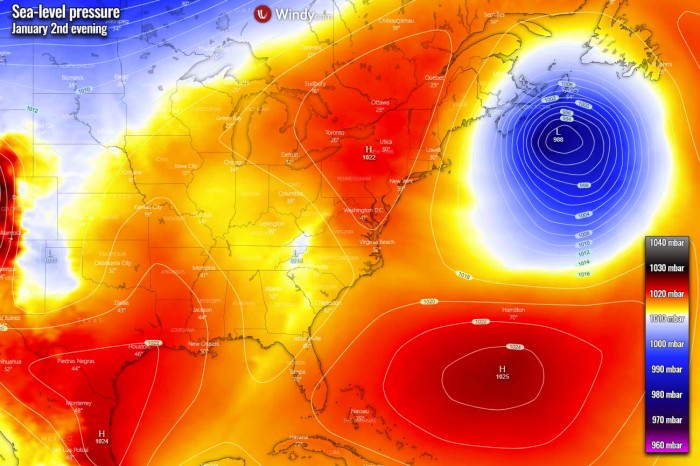 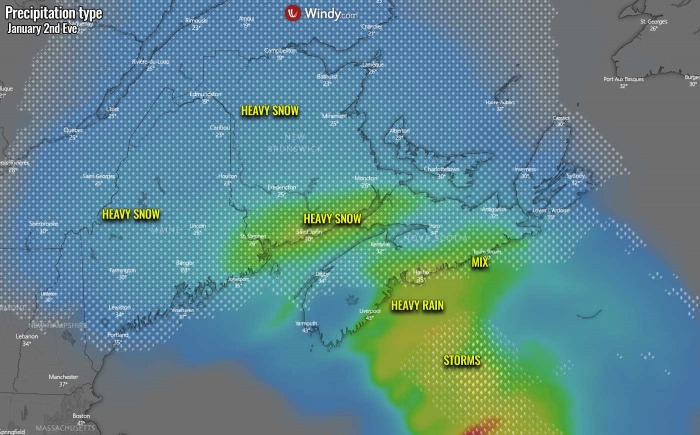 Widespread storms will likely develop further south across the Northwest Atlantic along the eastward-moving cold front. Warm weather will be washed away from the Northeast region, also cooling down into the Ohio Valley further west. Warm advection ahead of the deepening low will bring warm air mass close to Nova Scotia, while the low itself pushes colder air mass from Canada back across New England. 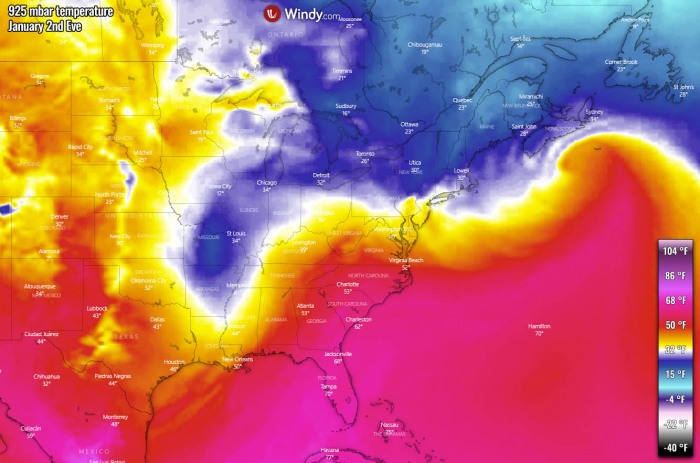 As the deepening surface low increases the pressure gradient around the center, blizzard conditions are expected to develop across the region as well. Precisely across southern Maine, southern New Brunswick, and Nova Scotia. Right where the most intense snowfall will develop. 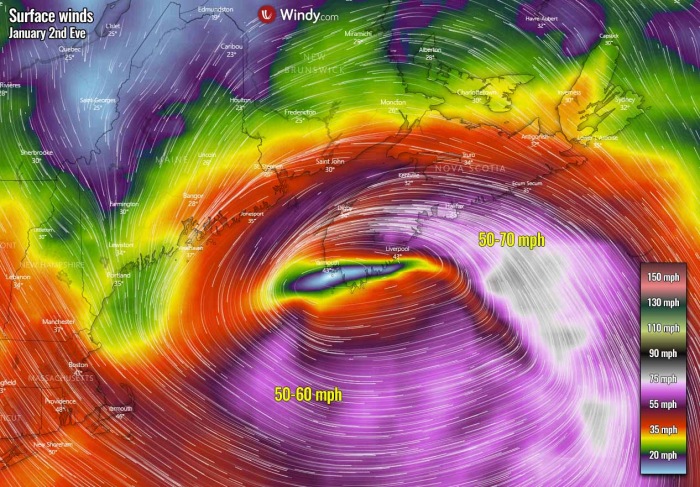 Therefore, dangerous whiteout conditions with fast-developing snowdrifts are very likely to develop. Travels will be strongly disrupted and could locally be completely shut down at any time. The peak gusts should, however, stay mostly off the coast, but Nova Scotia should get blasted by severe east-southeast winds from the Atlantic. Gusts up to 55-60 mph are quite possible there. Elsewhere in the region, 30-50 mph gusts are possible.

Millions across several states are under the effect of Snow, Ice, and Blizzard Warnings as the storm continues across the United States as the first winter storm of the 2021 year has developed. The ongoing winter storm with a dangerous ice storm and a snowstorm moving across the Midwest and Great Lakes will continue towards the Northeast United States tonight through Saturday. Wintry precipitation, including heavy snow and freezing rain, are spread across a narrow band along with the core of this frontal system. 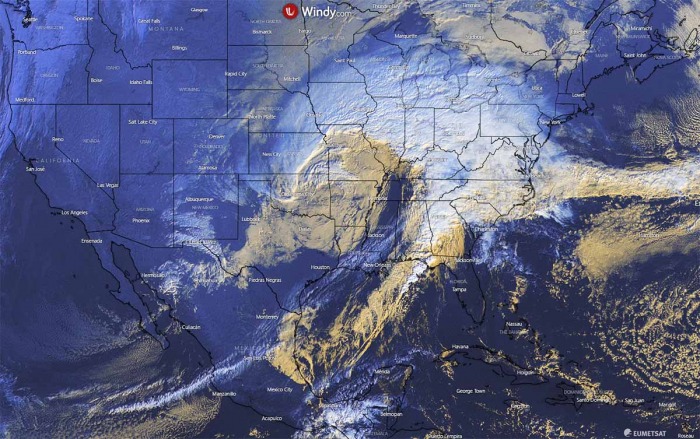 Heavy snow and dangerous ice storm will develop into New England and southeast Canada, with dangerous blizzard conditions and a significant amount of snow across Maine, New Brunswick, and Nova Scotia on Saturday. 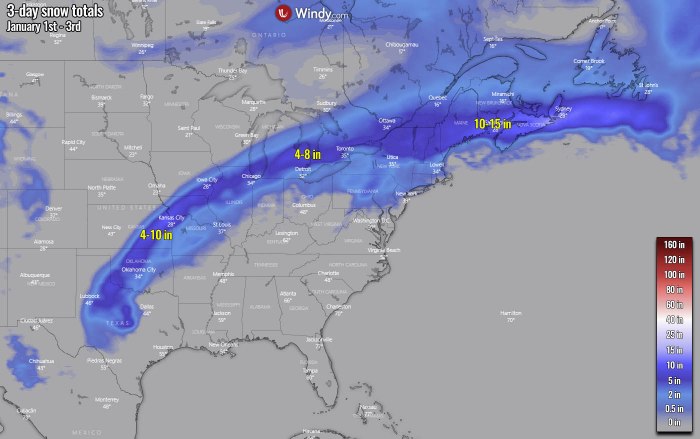 The ECMWF model chart above indicated an impressive long stretch of the winter storm track with a narrow swath of the accumulated snow from northern Texas, across Oklahoma, Kansas, and northern Illinois across the Great Lakes into the Northeast United States and New England to southeast Canada. Snow totals should be of a few inches up to 10 inches along the swath, with the most significant amounts of snow across New England and Nova Scotia. There, up to 15 inches of snow is locally possible.

Heavy snow blizzard will also be another threat across New England (US), New Brunswick, and Nova Scotia (Canada) from Saturday night through Sunday as severe winds combine with heavy snow. Stay alert for a dangerous ice storm and potentially significantly worsening driving conditions.

– 2021 starts with a dangerous ice storm across the United States, millions affected by the new winter storm moving through New Year’s Eve