The pressure patterns in the past few weeks were very dynamic. Especially over North America, we witnessed strong low-pressure systems over the east/northeast parts. These low-pressure systems transported colder air down from the north, and out into the North Atlantic ocean, cooling down the Gulf Stream region to below normal temperatures.

Pressure patterns in the past few days over North America were featuring a trail of low-pressure systems, usually most intense over the eastern and northeastern parts. Such low-pressure systems tend to pull colder air down from the north. The first image below shows the pressure pattern over North America on May 14th, where we can see a strong low-pressure system over the northeast. The second image shows the air temperature anomalies, revealing that a much colder than normal airmass is being transported from the continent into the North Atlantic ocean. 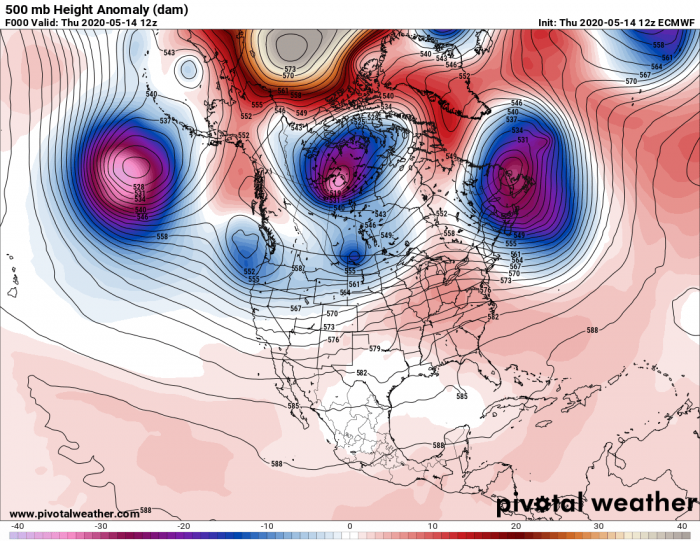 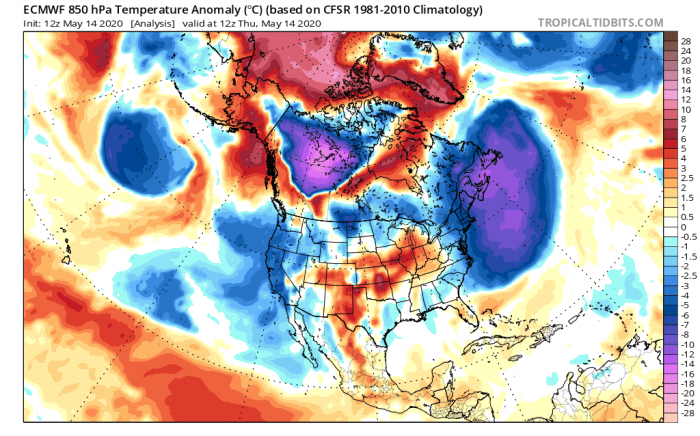 The low-pressure system and the cold air mass moved directly over the North Atlantic ocean current, also known as the Gulf Stream. The Gulf Stream is a strong ocean current that brings warm water from the Gulf of Mexico into the Atlantic Ocean. It extends all the way up the eastern coast of the United States and Canada, where it starts to turn towards northwest Europe. This strong current of warm water influences the climate of the east coast of Florida, keeping temperatures there warmer in the winter and cooler in the summer, compared to the other southeastern states. Since the Gulf Stream also extends toward Europe, it helps to warm the western European countries, having a major impact on the regional climate. The image below shows a rough outline of the Gulf Stream and its direction. 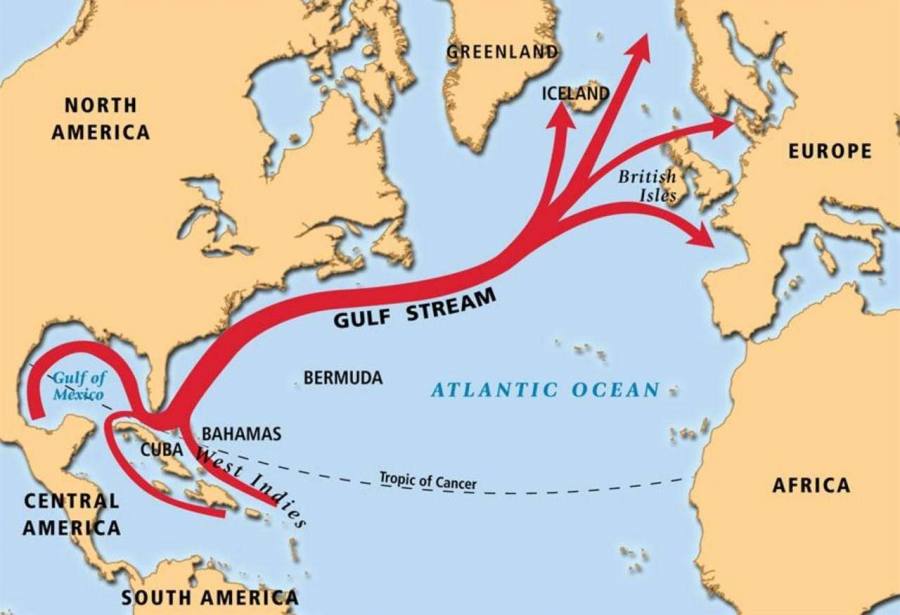 We produced a high-resolution analysis of the Gulf Stream. The stream itself can be best seen if we look at the temperature analysis and the ocean surface current speed. The image below shows the ocean surface temperature analysis, and we can see the warm stream of water moving up along the east coast of the United States, extending far into the North Atlantic. Of course, the temperature slowly decreases when it flows further north, as the stream releases heat into the atmosphere. 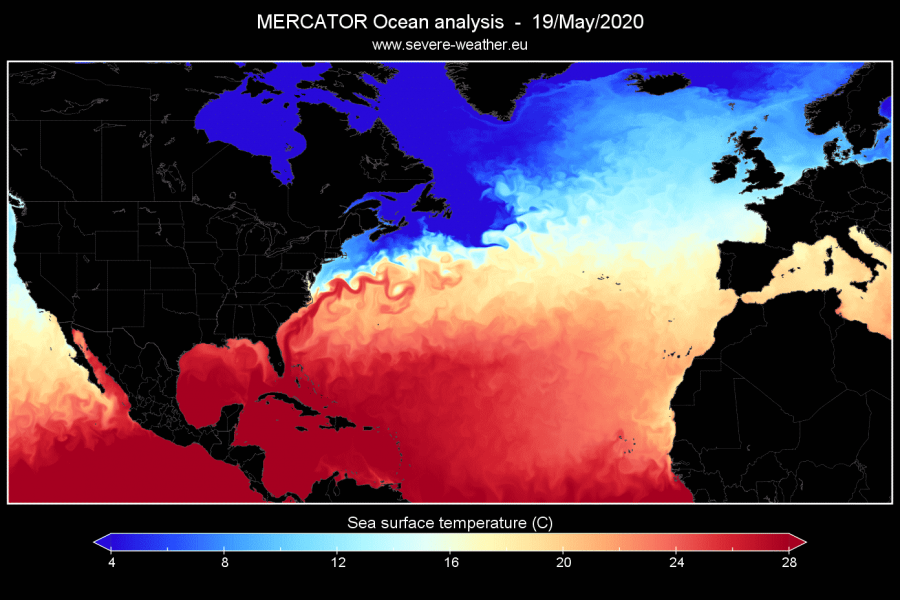 The Gulf Stream is perhaps seen even better when we look at the movement and speed of the ocean surface currents. The image below shows the ocean surface current speed, where the Gulf Stream really stands out and can be seen in its most raw shape and form. The current is not a straight line, as seen on many graphics. It is very complex, with a lot of dynamics, swirling across the North Atlantic, rather than simply flowing in a straight line. We can see that it has a lot of “rotational eddies”, basically smaller swirls of water, warm and cold, depending on which direction they spin. This is very similar to the atmospheric jet stream. 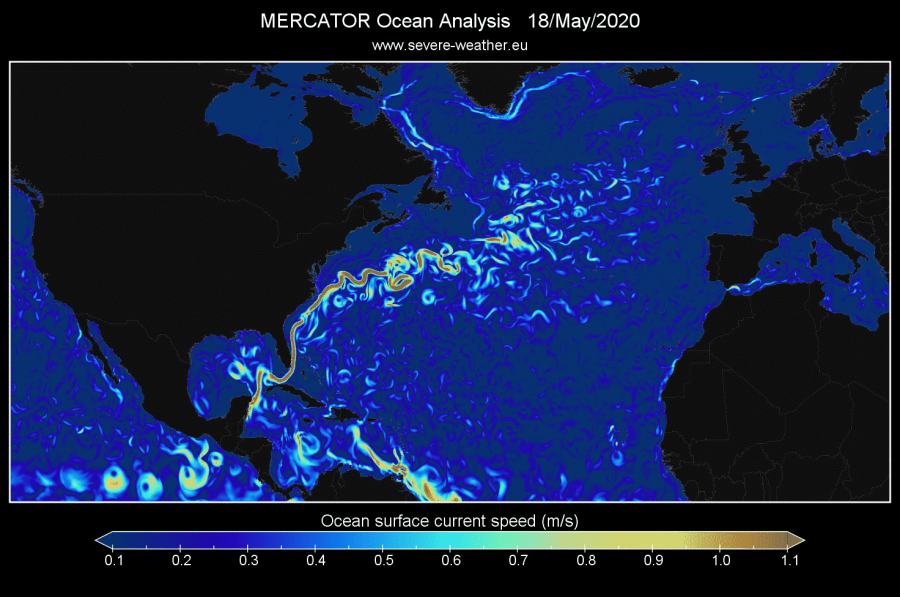 We also produced an animation of Atlantic ocean temperatures, where we can nicely see the Gulf Stream in motion, as it transports warmer waters towards the north. You can also observe the seasonal ocean temperature change, as the waters warm fast in summer, and cool in autumn.

Currently, due to the low-pressure systems and the colder air from the north, the Gulf Stream waters are running colder than normal. The image below reveals the large area of colder than normal water temperatures surrounding the main transport route of the stream. Strong winds, low-pressure, and colder airmass have affected the stream and caused a mixing of the ocean layers. 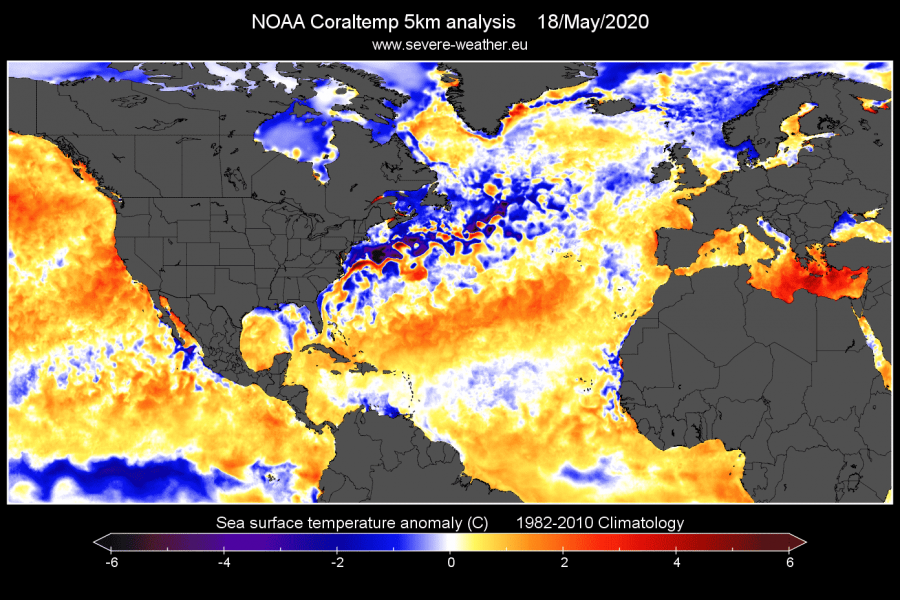 Comparing the ocean anomalies from the past few days with the previous month, we can see just how much the ocean waters around the Gulf Stream have cooled, compared to the long term average. We can also see that the Gulf of Mexico has cooled as well, compared to the long-term average. The cooling trend is also evident in the second image, which shows a more short term, 7-day anomaly change. 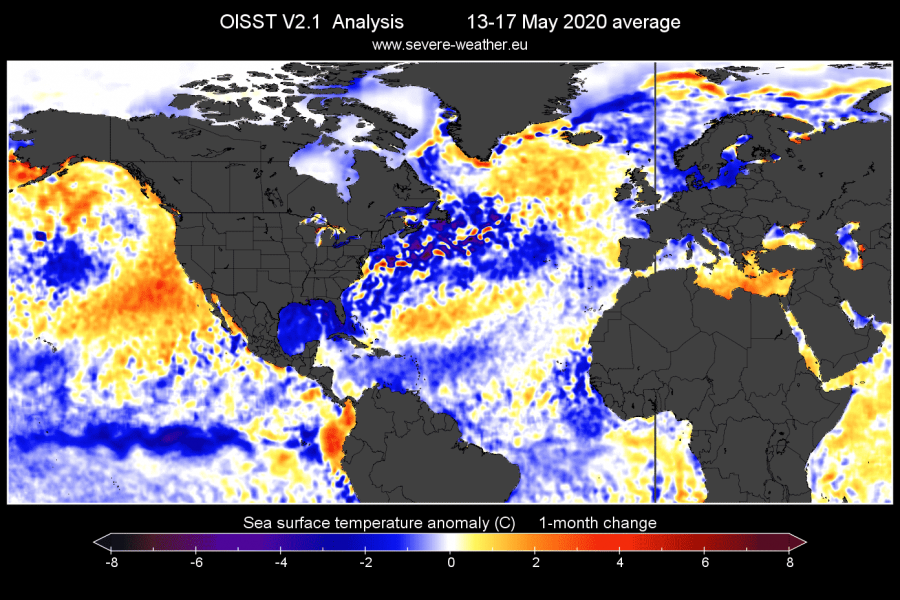 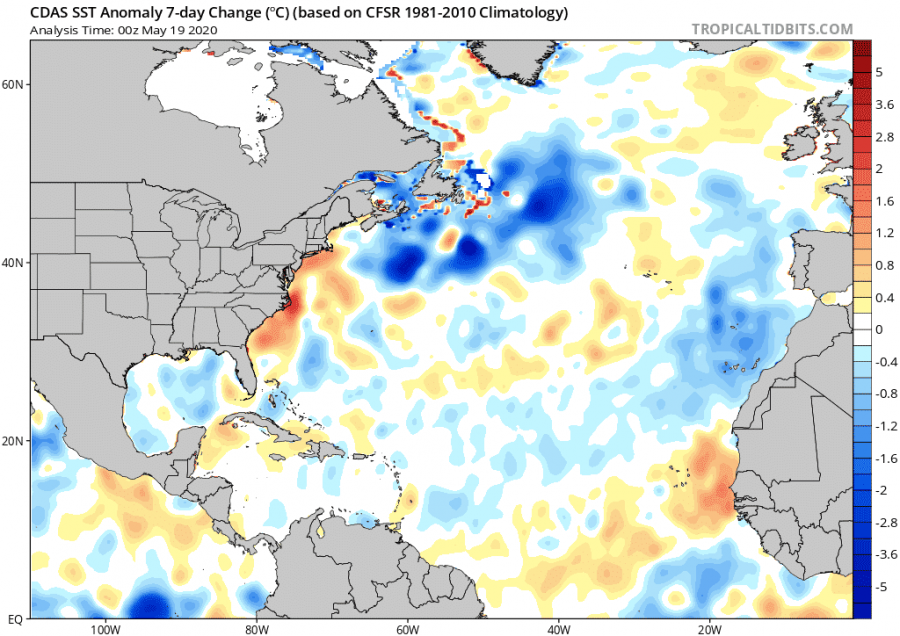 If we look at the atmospheric conditions, we can see right away that the pressure patterns played a major role, as discussed before. The first image shows the sea-level pressure anomaly for the 10-day period from May 7th to May 17th. Strong low-pressure systems dominated eastern North America. The cold air was transported over the continent and into the ocean, as we can see on the second image, which shows the 850mb level (1.500m) temperature anomalies for the same period. The temperature anomaly for this level shows just how warm/cold the air mass is. And as we can see, the air mass over the Gulf stream was several degrees Celsius colder than normal for this time of year. 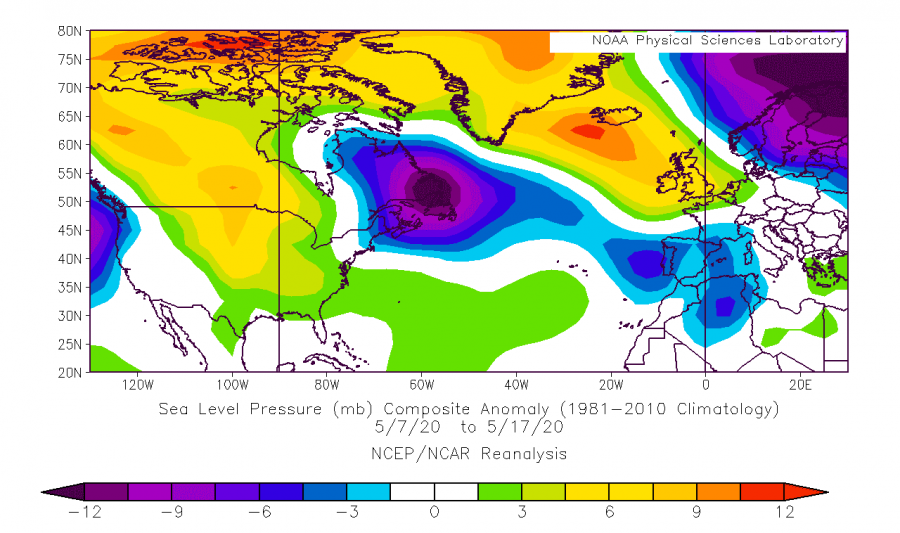 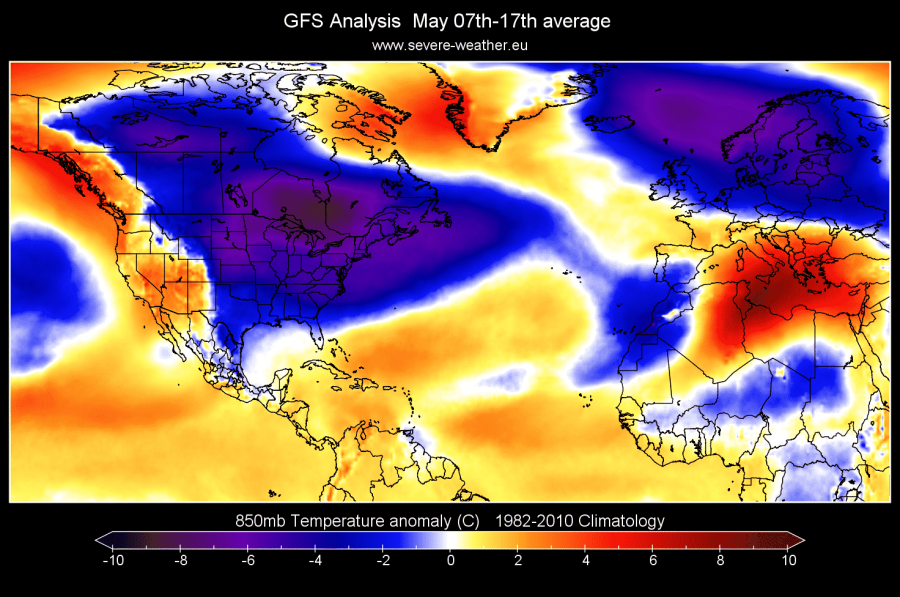 The weather forecasts show another round of low-pressure systems crossing North America, exiting into the North Atlantic, and transporting more cold air over the Gulf Stream on Thursday. That should keep the ocean surface temperatures colder than normal, creating more cold “eddies” in the Gulf Stream. 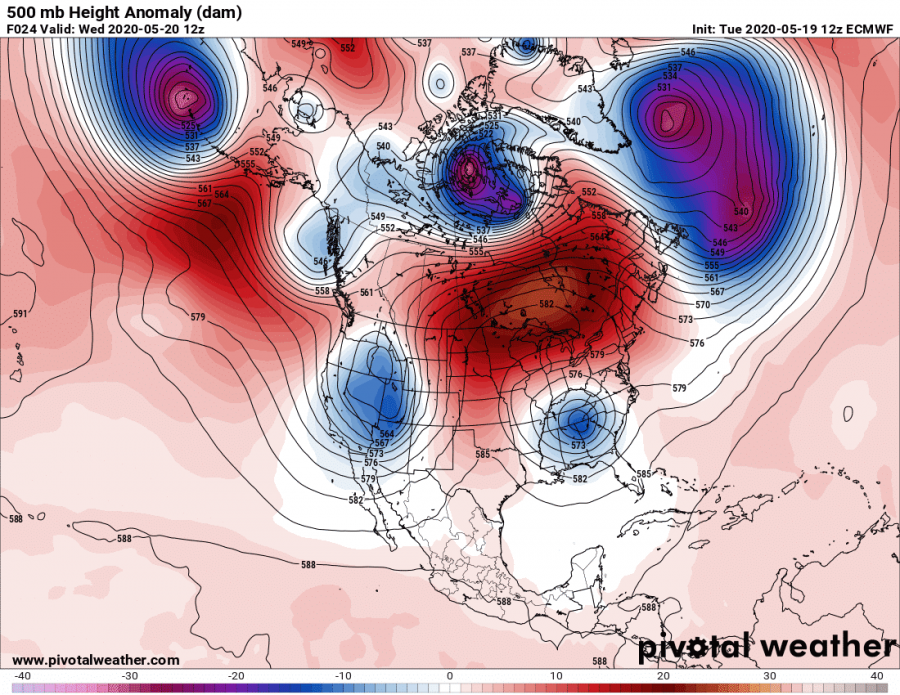 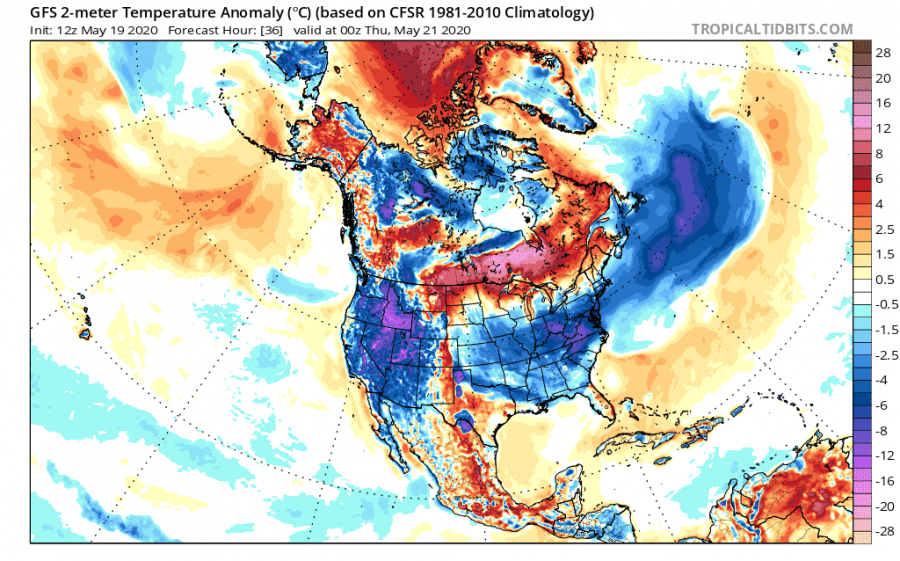 Ocean forecast models for next week continue to show colder anomalies in the American sector of the Gulf Stream, extending also into the sub-polar North Atlantic. We can see the Gulf stream regaining some composure amid the colder than normal surface waters. 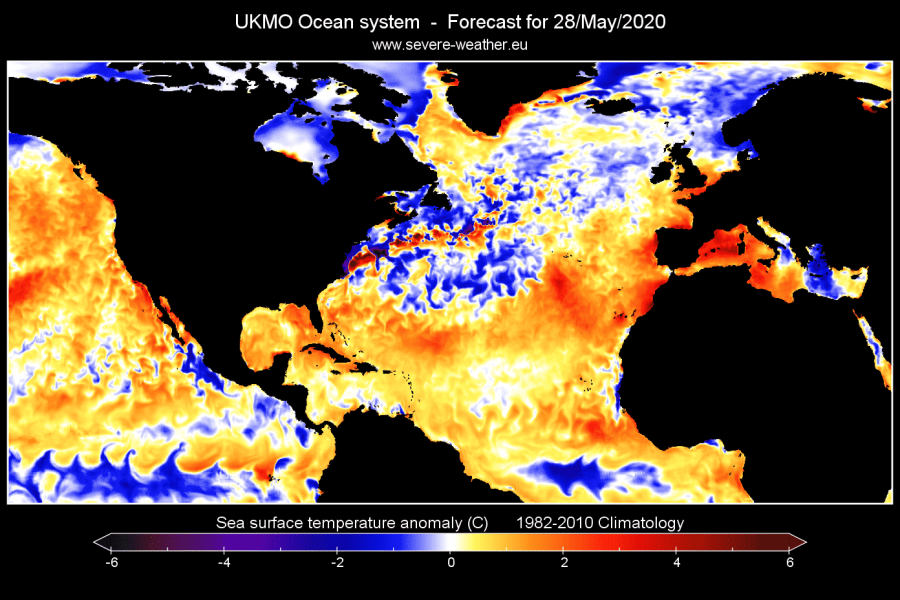 The Gulf Stream is extremely important to the global climate. It acts as a temperature regulator for the east coast of North America, the coasts of Western Europe and northwestern Africa, and other coastal areas along its path. Its importance and effects are well documented, and it is being closely monitored, for any long term changes. Current cooling activity will not have a long term effect on the Gulf Stream, but it can perhaps have a minor effect on the ocean temperature anomaly distribution in the North Atlantic for the upcoming summer, and impacting the summer weather. The seasonal forecast from the CFSv2 model does show the Gulf stream area running colder than normal during summer 2020. This is not entirely a consequence of the current activity, but also a reflection of the summer 2020 weather pattern. Ocean temperatures do play a role in whether progression, as pressure systems move over the Atlantic, and into Europe, interacting directly with the ocean. We will look more closely at the expected summer 2020 patterns in an upcoming article.

We will also keep you updated on any important further development in the Atlantic Ocean. While you wait for more updates, don’t miss the Arctic warming event, with a powerful high-pressure system warming up the polar region and boosting the ice melt season.