Much of the North American continent (both CONUS and Canada) will experience very warm weather with unusually high temperatures this week into early January. But at the same time, an intense cold outbreak will blast from the Beaufort Sea towards Alaska and bring *frigid* cold temperatures into much of Alaska and Yukon (Canada) after Christmas into New Year. Based on the latest guidance, the last days of December and early January will be brutally cold, as extremely low temperatures (even for Alaska) are expected – well below -40 °C (-40 F) in many areas. That is locally more than 30 degrees °C / °F colder than normal for this time of the year – that is impressive even for this part of the globe!

The evolution of the pattern suggests a very deep trough will develop over the Arctic region (Beaufort Sea) and expand into Alaska and Yukon, with strengthening upper-level ridge over northeast Russia (Siberia). While at the surface, deep cyclones continue over the North Pacific and the Gulf of Alaska, creating a strong gradient against the powerful high-pressure system developing under the Siberian upper ridge. This means a strong meridional flow develops in between, advecting extremely cold temperatures into Alaska and parts of Yukon state of western Canada. While at the same time, temperatures across CONUS and the rest of Canada will be above normal for this period, as ridging persists through much of the next 10 days. Attached are 500 mbar heights and 850 mbar temperature anomalies through day 1-5 and day 6-10 periods – notice the extremely cold spot over Alaska! 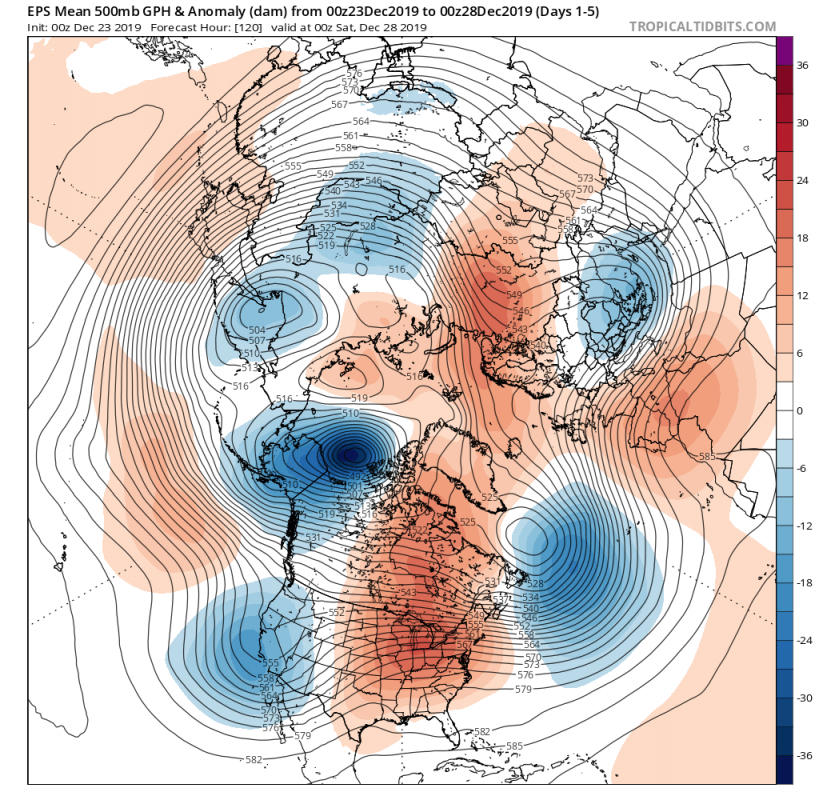 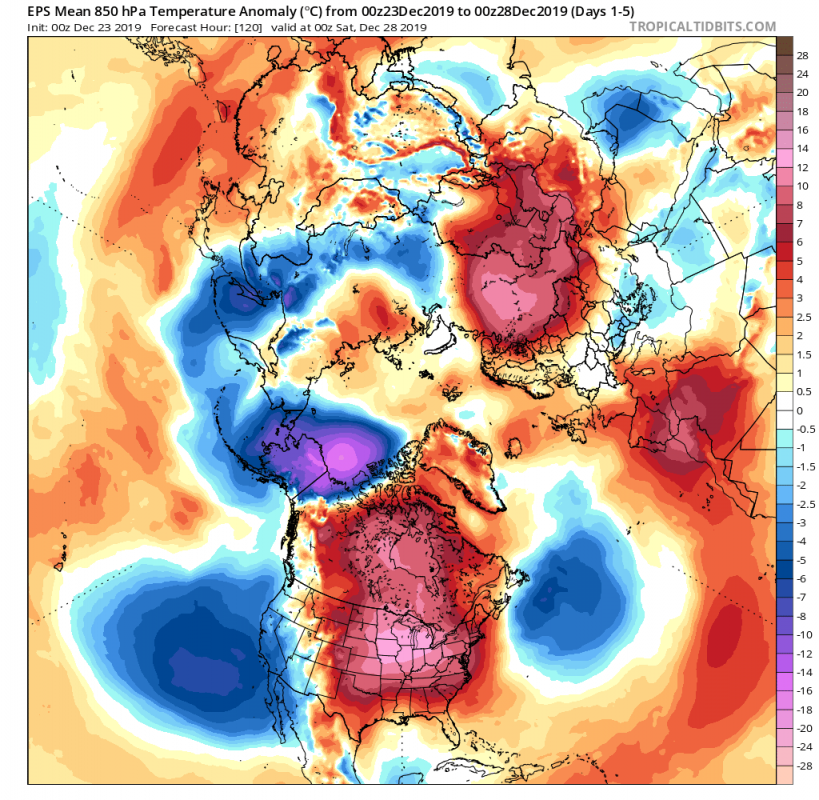 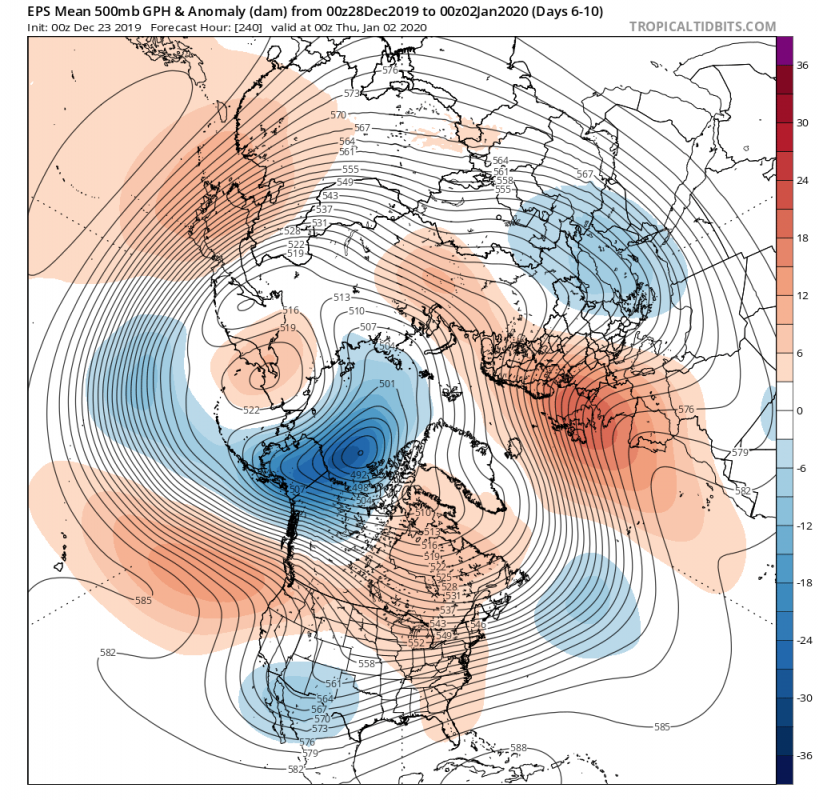 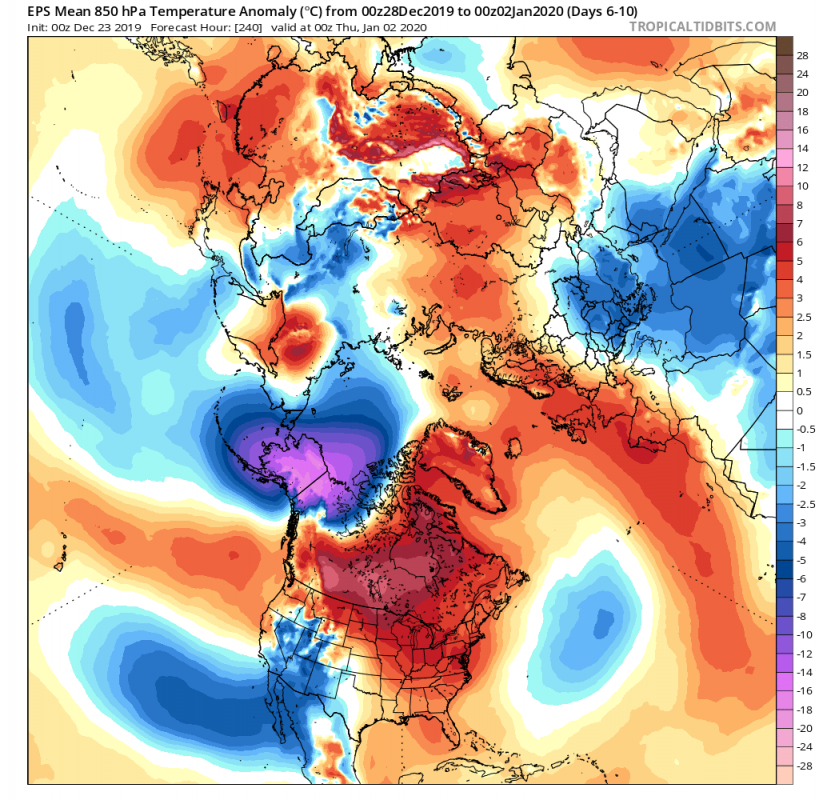 Zoom-in view of the 850 mbar temperature anomaly for the day 1-5 and day 6-10 periods over Alaska – no doubt the next 10 days period will be extremely cold with close to 30 degrees °C / °F below normal. 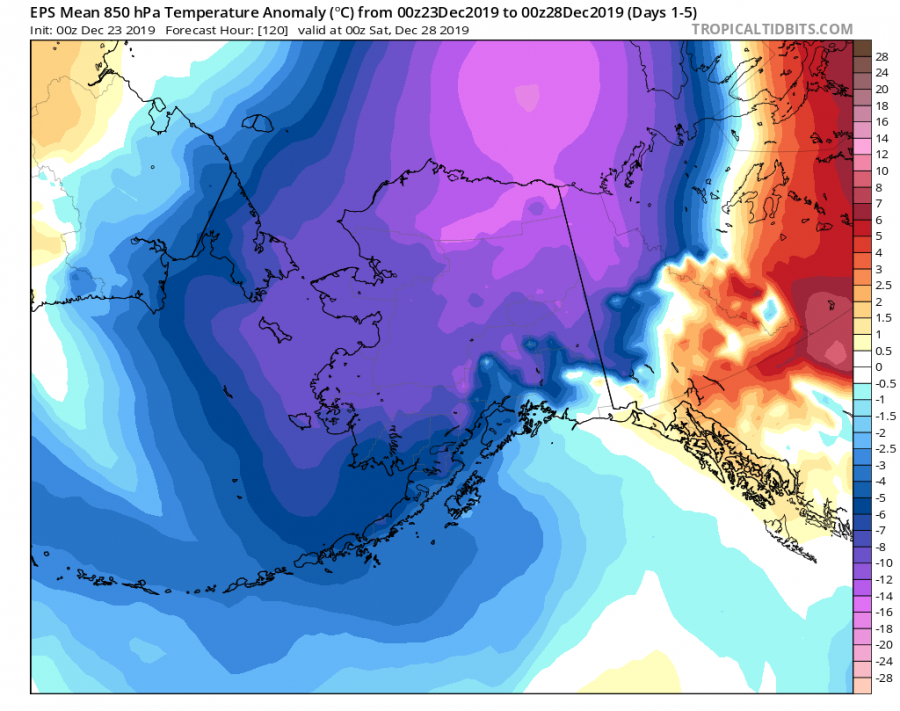 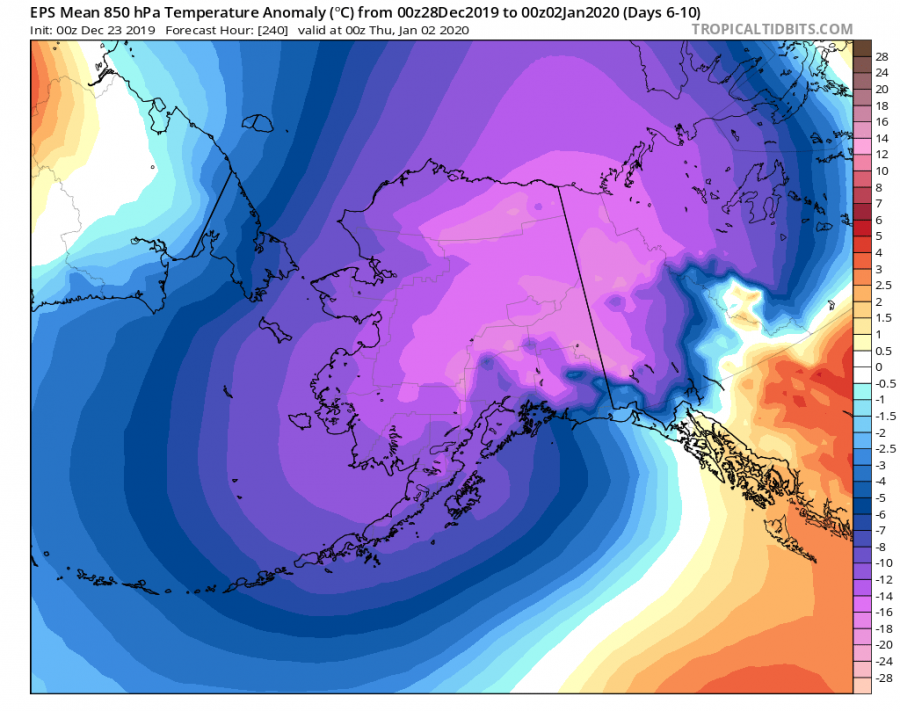 Here is the animation of the 2 m temperature across Alaska through the remainder of December – notice how brutally low temperatures develop across much of state of Alaska, partly also across the state of Yukon (Canada).

Attached is the pattern evolution sequence from December 26th until the 31st, regarding the 2 m temperature and its anomaly against the long-term average. The cold begins strengthening across the northern parts of Alaska on Thursday, gradually spreading south-southwest over the weekend and next week. The peak low temperatures will likely push below -45 °C or -50 °F from Dec 30th to Jan 3rd in northeast parts of Alaska: 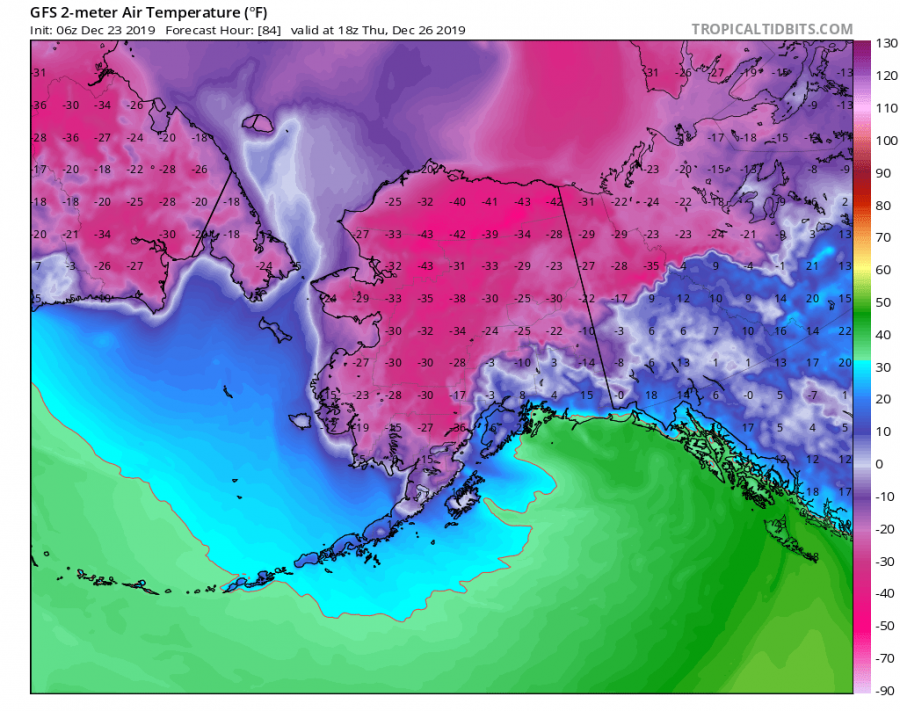 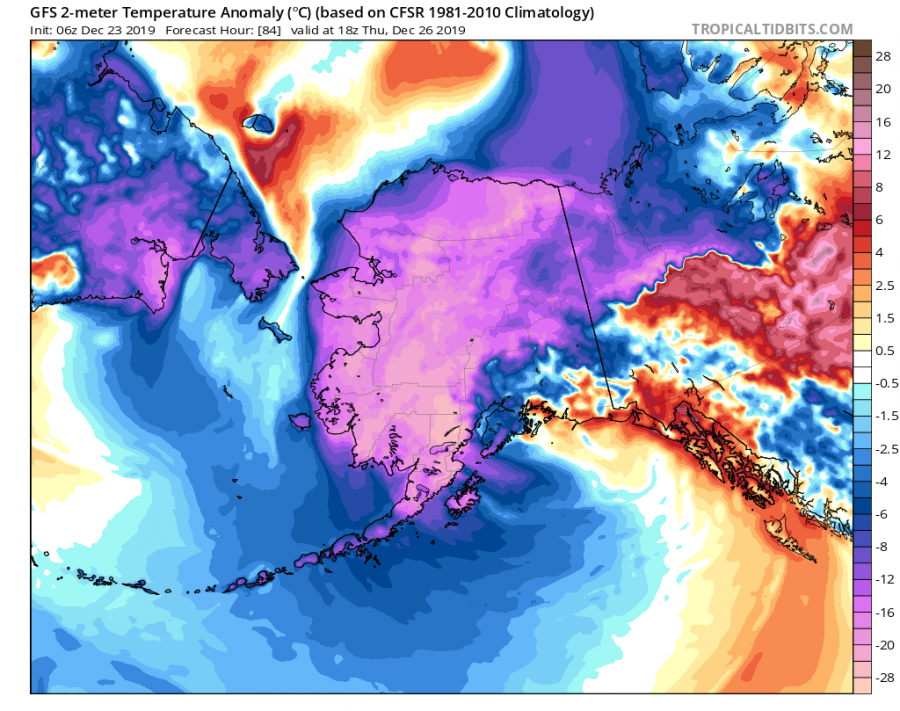 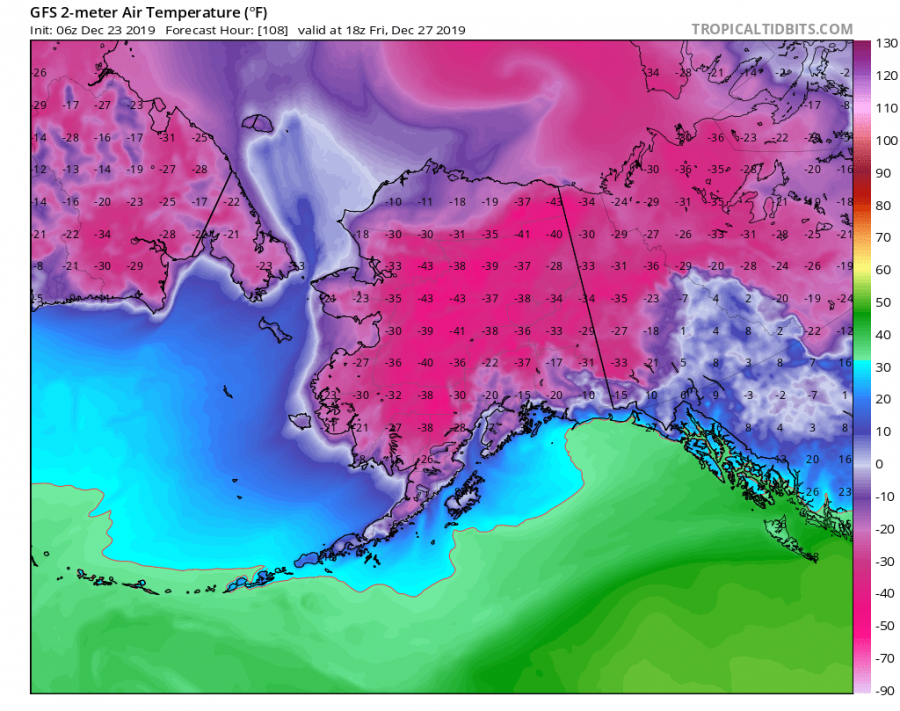 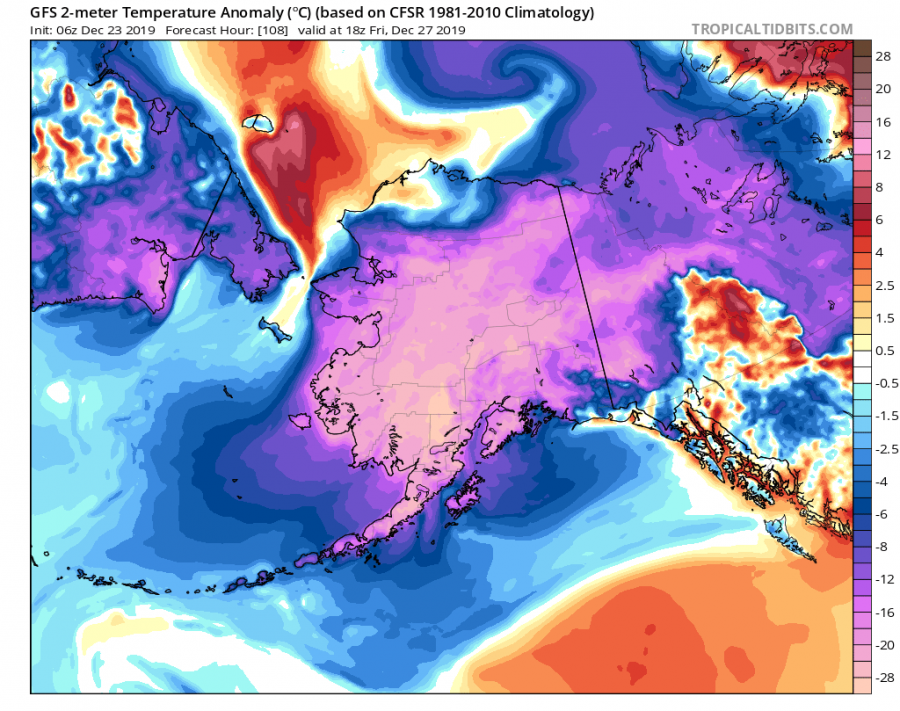 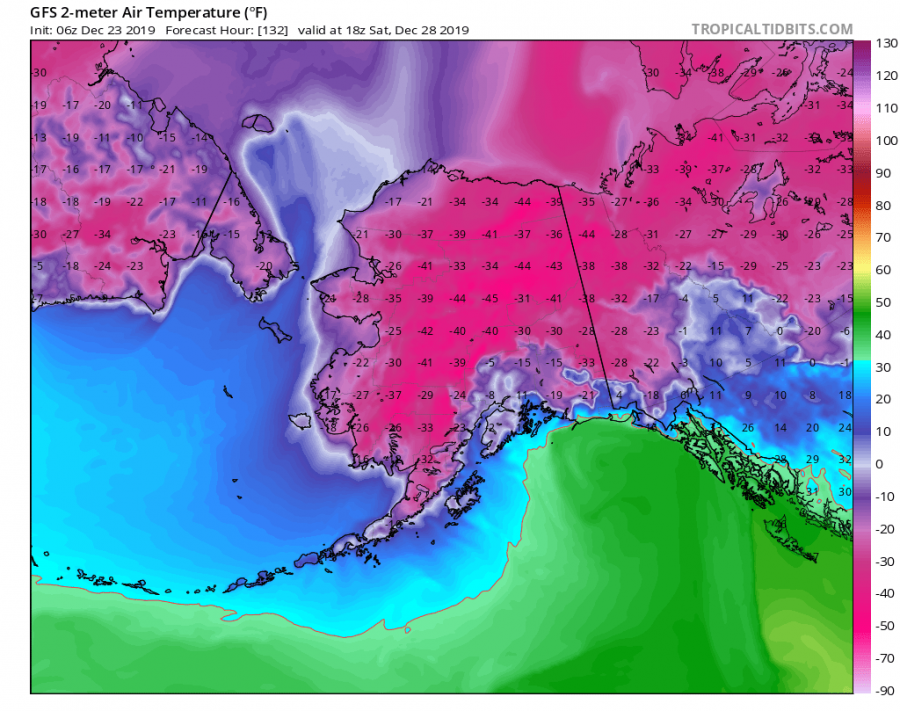 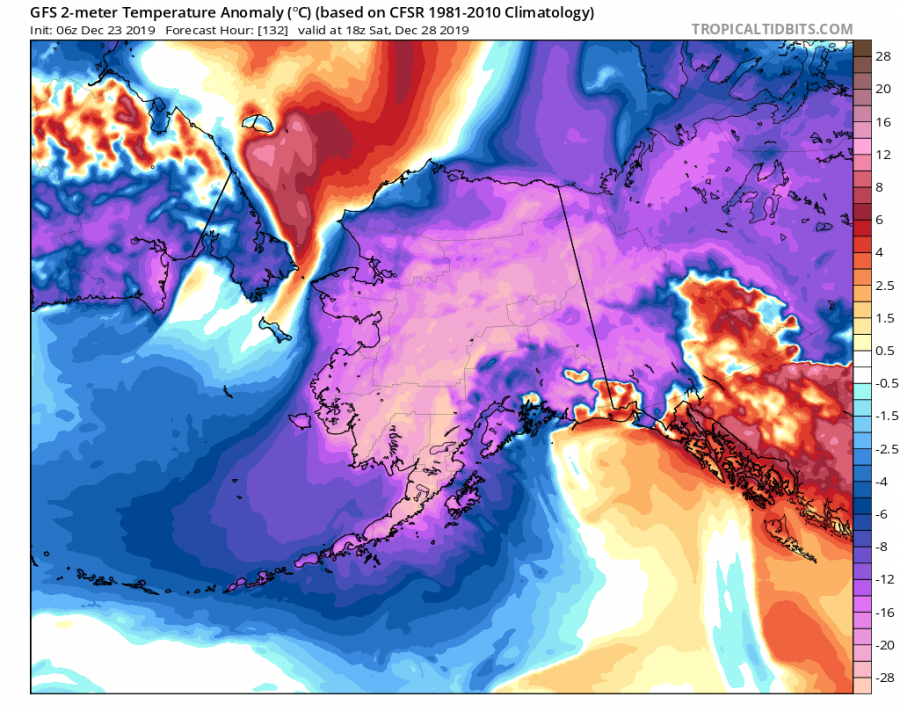 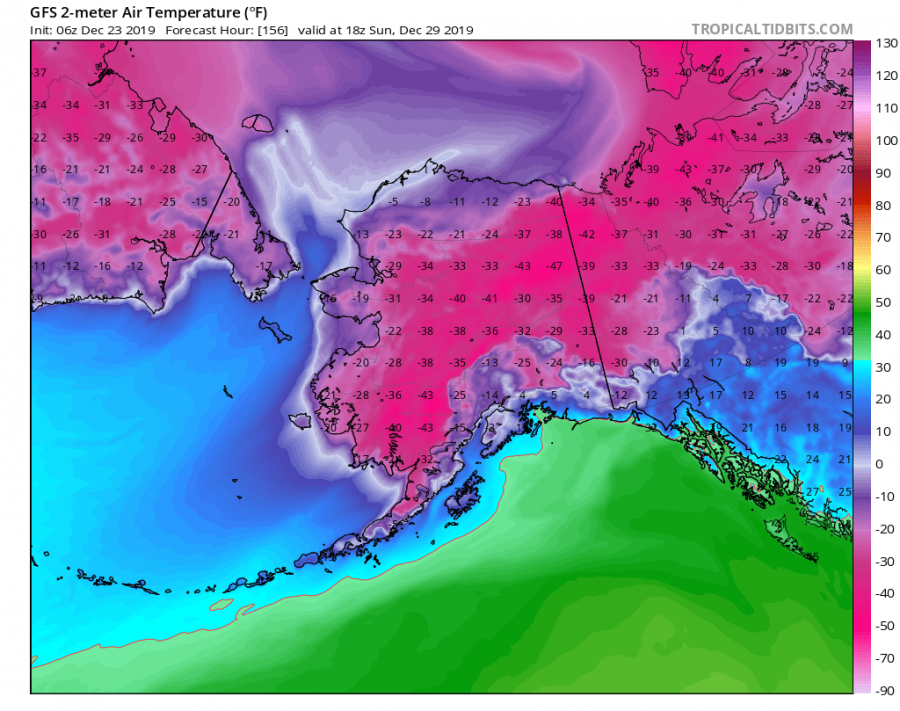 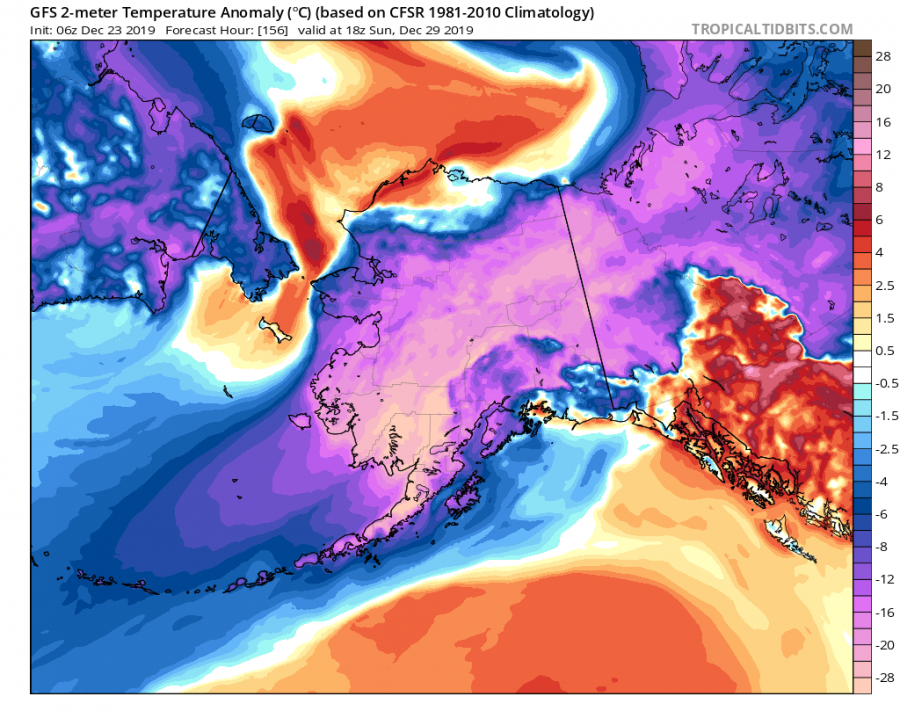 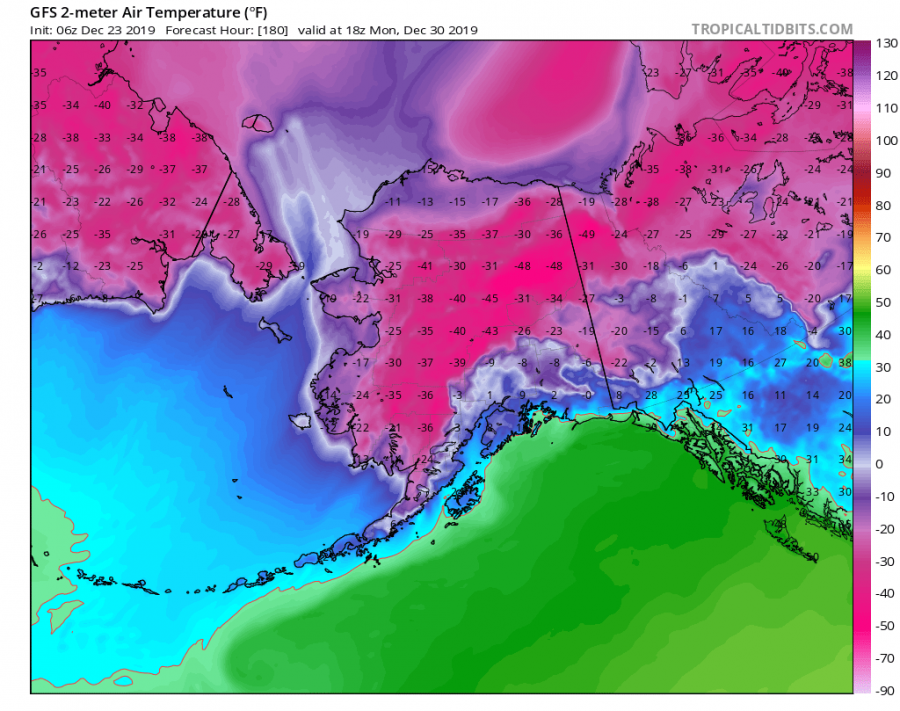 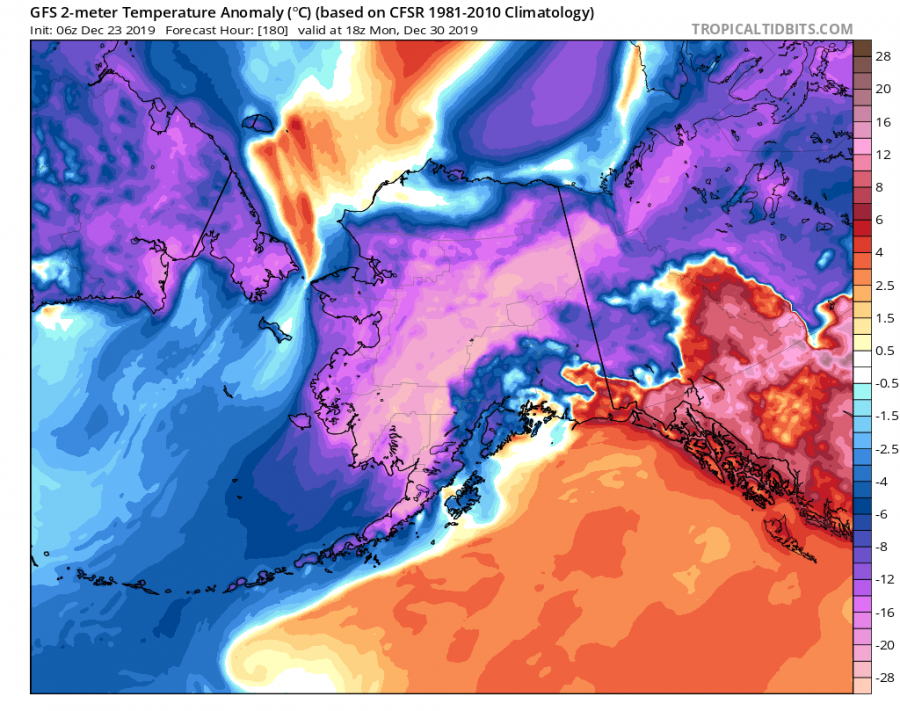 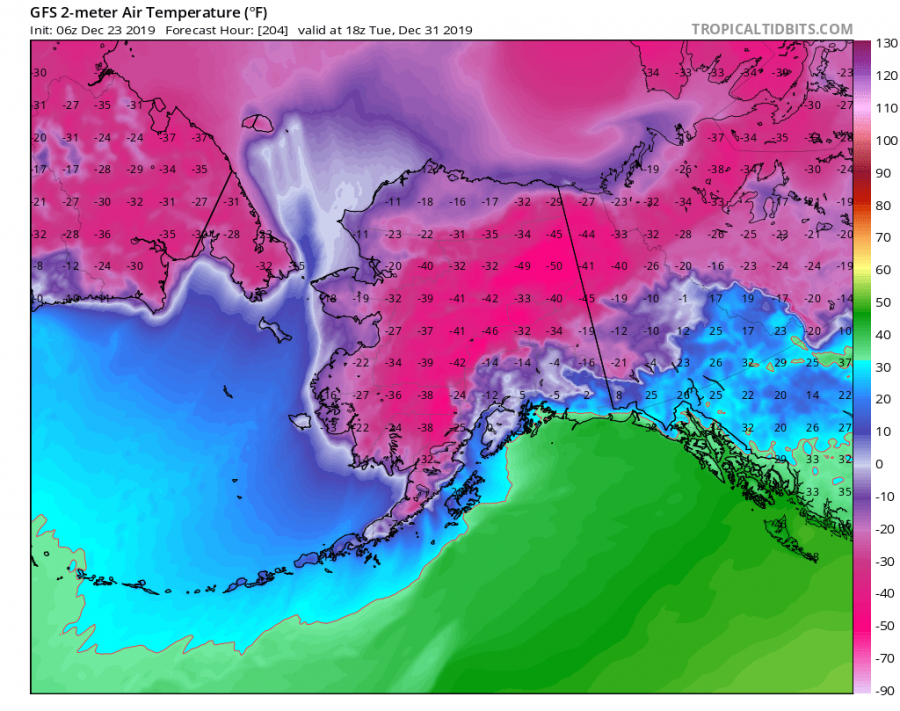 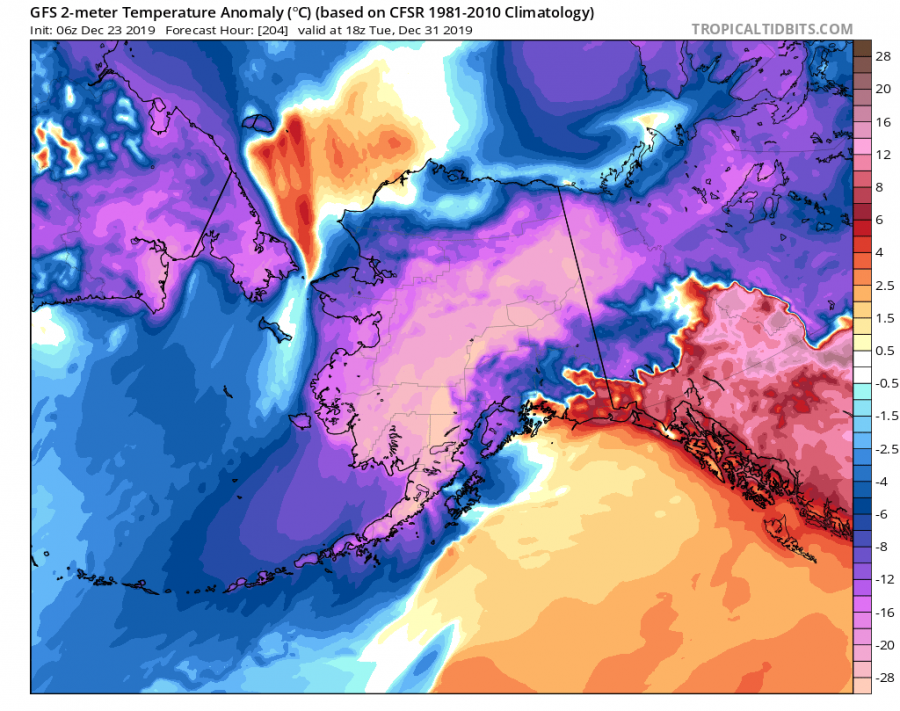 It appears likely the frigid cold airmass will extend into the early January, spreading also further east and southeast across western Canada (towards British Columbia). 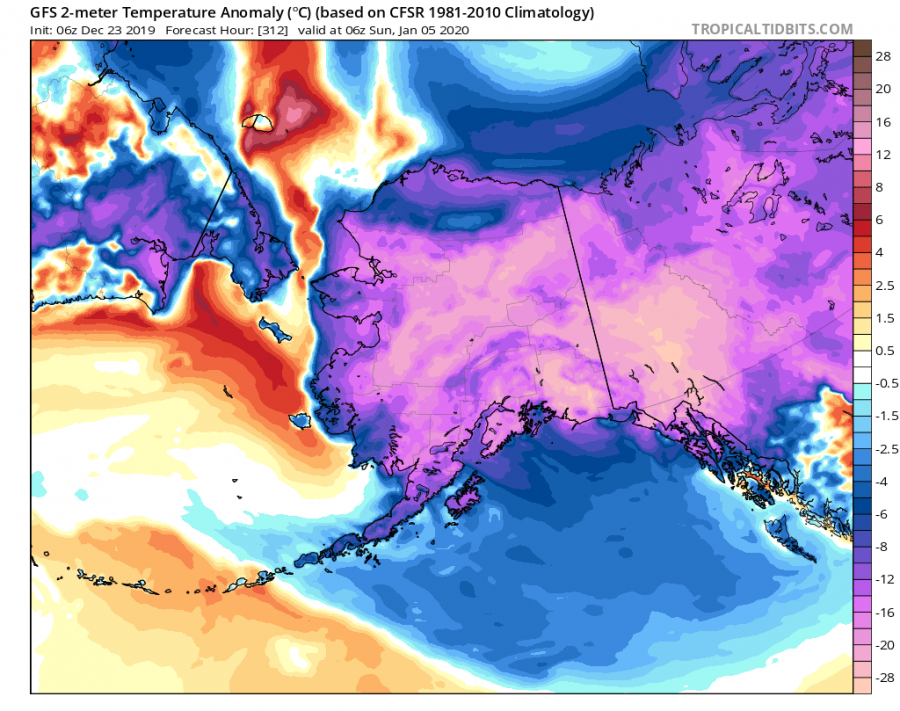 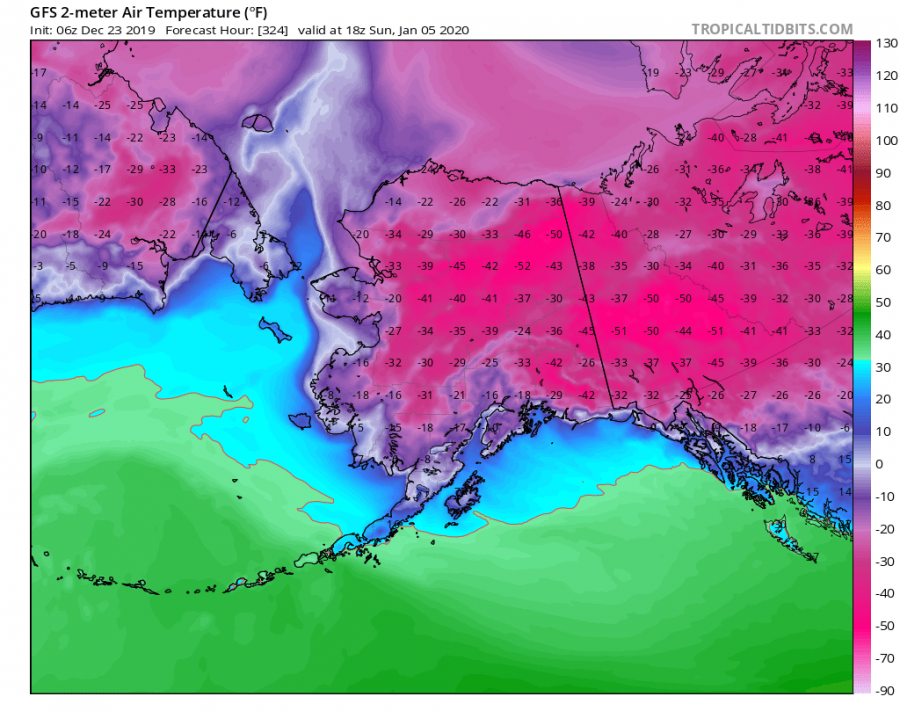 Here is another view of how EXTREME the cold outbreak will be – through the last days of December, the 850 mbar (approx. 1200m ASL) the temperature above the city of Faibanks will be around -30 °C (= -22 °F). That is around 20 degrees Celsius lower than normal for end of December (-10 °C / 14 °F). On the 27th, temperature drops significantly from around -15 to -30 °C in less than 24 hours as frigid cold airmass advects over central Alaska: 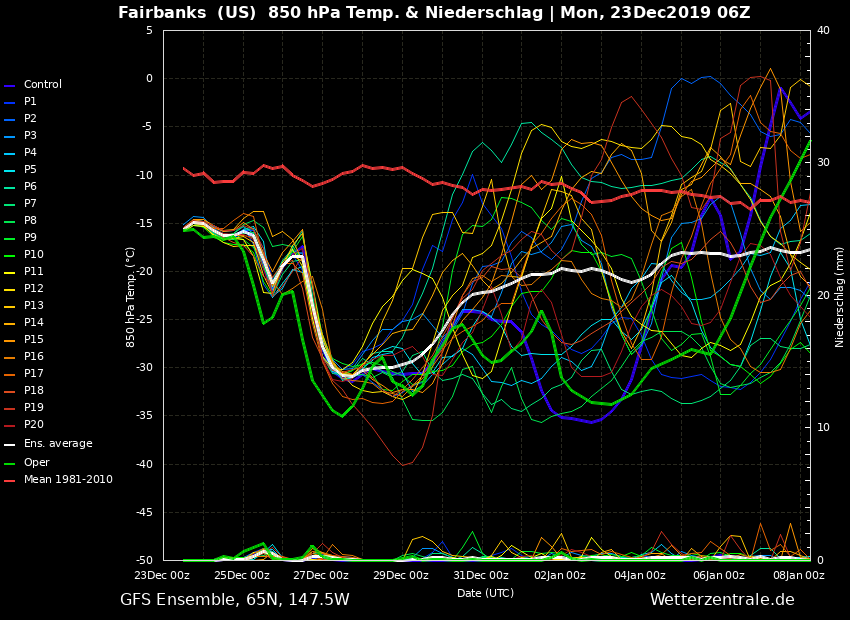 Additionally, major snow amounts are also expected along the mountain range between south-southeast Alaska and western Yukon state where persistent strong orographic snowfall will be ongoing on most of the days. Models are developing an incredible amount of snow, locally even more than 500 cm ( = 200 inches / 16 ft) of total snow through early January 2020! 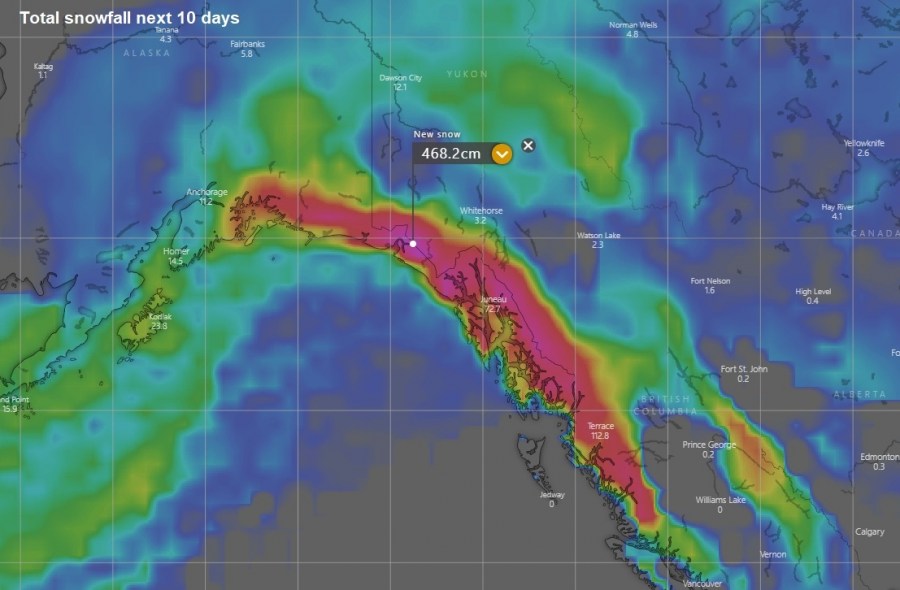 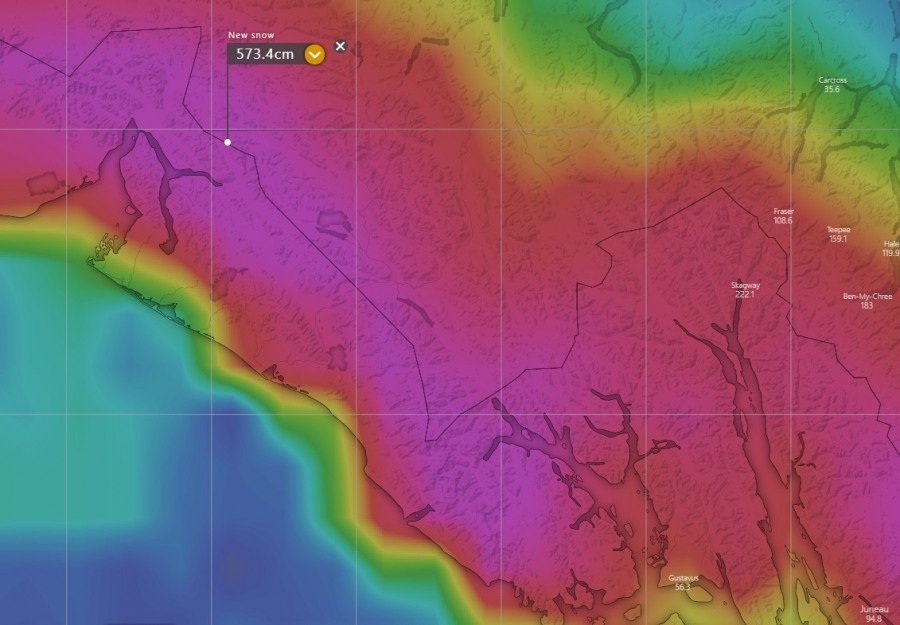 We are monitoring the outbreak evolution and will keep you updated in the coming days – stay tuned!