April 2020 temperatures across the Gulf Coast states from South Texas across southern Louisiana to South Florida are exceptional! The summertime-like temperatures and record warmth of the Gulf of Mexico. Numerous cities are smashing the all-time heat and average records. The blocking pattern and persistent high-pressure systems across the Gulf and southeast US have contributed to unprecedented record-breaking Florida heat lately. On Monday, the city of Miami experienced its hottest April day on record, peaked at a remarkable 97 degrees Fahrenheit (= 36.1 °C)!

Miami’s scorching heat of 97 °F Apr 20th Monday was the new monthly record in the city which is also the earliest Miami’s 97 °F mark in any year — this is more than five weeks ahead of schedule. The Apr 20th daytime average temperature tied as the 4th warmest day recorded in the city’s history — roughly three months before the typical onset of such summer-like warmth. Miami has reached the peak temperature of 94 °F (= 34.4 °C) four times in 2020 already, which is beyond exceptional so early in the year.

Here is something mind-blowing, the Miami airport weather station plot. It shows a standard deviation magnitude of each April (1st to 24th) in the time series, based on 1937-2019 mean and SD. The 2020 standard deviation is at extraordinary +3.25 °F!

Here's a way to illustrate that the heat in #Miami this month has not been just "above average". Using full record of MIA, this chart shows standard deviation magnitude of each April (1-24) in the time series, based on the 1937-2019 mean and SD.
2020 is at an absurd +3.25 SD. pic.twitter.com/opvMMdN2gL

The April’s monthly average this year is so high that it could break the May’s monthly average temperature in Miami. Seriously! April’s average is about 7 °C above the long-term average, which would actually classify as the 2d hottest May on record. Yes, April does feel like May! And even more bizarre fact – April 2020 could rank #25 out of 125 Junes with this average monthly temperature. This just shows how extreme spring 2020 is with this Florida heat! 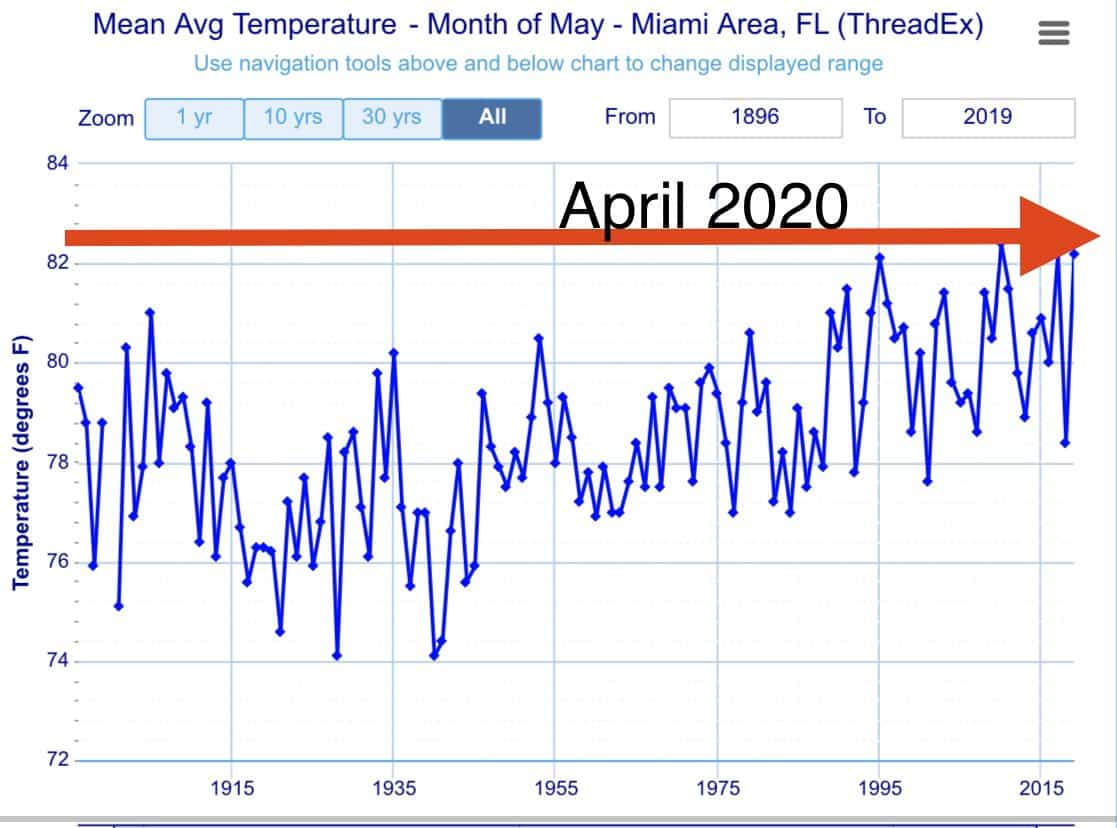 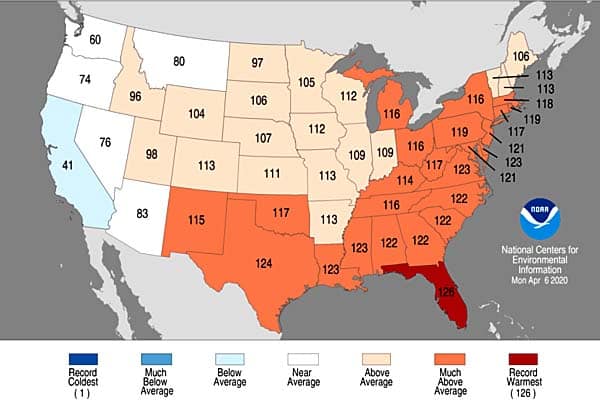 There were so many unprecedented heat records hit; New Orleans reported 90 °F on April 9th — five weeks ahead of average and the earliest on record the city has been that warm. Just after the city experienced its warmest March on record. Houston also reported a record heat of 92 °F on Apr 12th. This week, the deep south Texas cities have reported record-breaking temperatures as well. Corpus Christi hit 96 °F on Apr 20th, setting a new daily record with a 7 °F higher mark. The city of Victoria recorded 94 °F.

What’s remarkable to see is the 500 mbar geopotential analysis for the year 2020 over the United States and the Gulf of Mexico. We can see an exceptional positive anomaly of the geopotential heights and obviously also its related surface high-pressure systems. The sinking air associated with the persisting upper ridging and high-pressure systems is normally resulting in less cloud coverage, which at the end brings higher daytime temperatures. The often persisting upper ridge has also limited the stronger penetration of cold weather and fronts from the north, leaving Florida and the Gulf Coast in sunny and warm/hot weather. The often stable weather also brought very dry conditions – New Orleans and Houston had their 4th & 5th driest March on record this year. 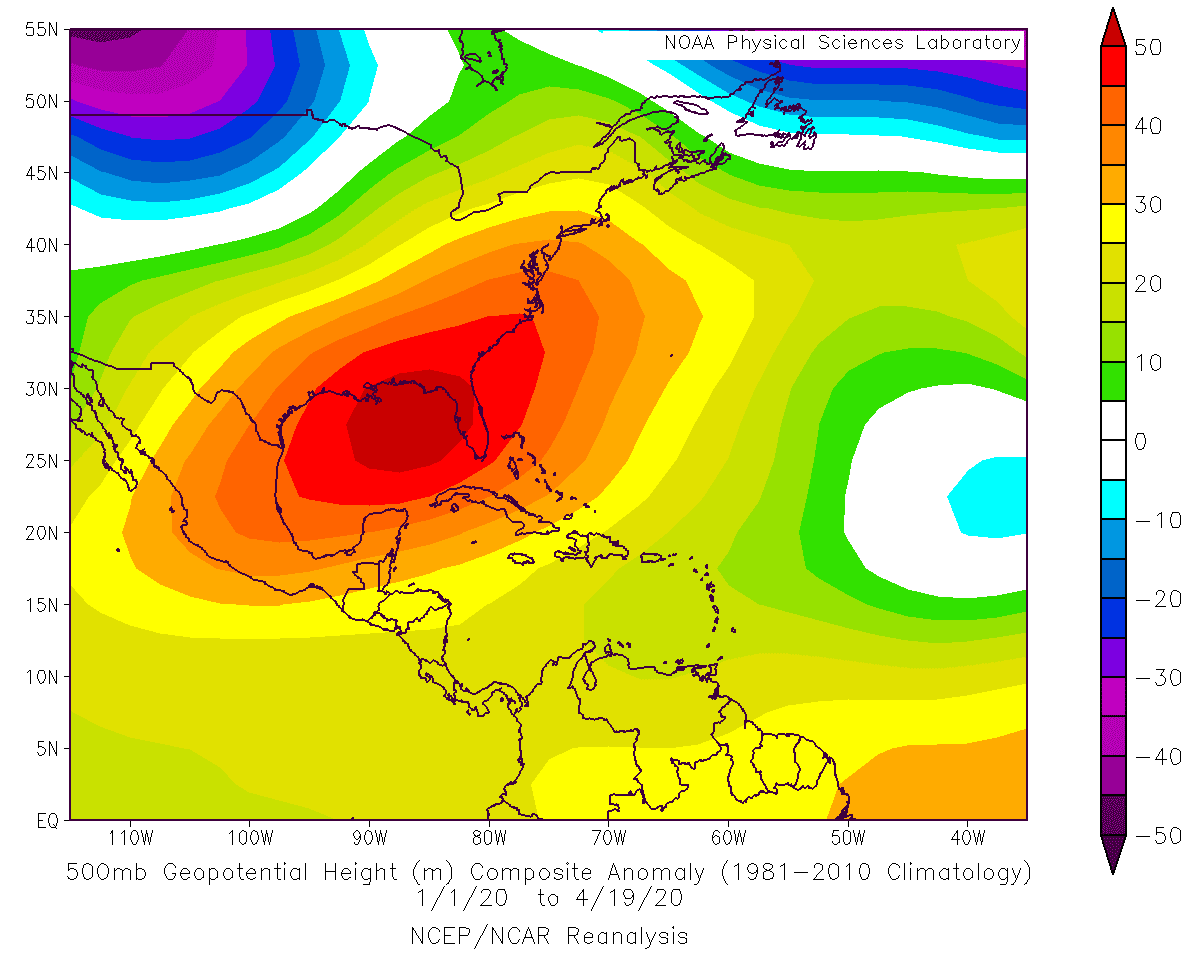 What’s another extraordinary result of such pattern and this record-breaking Florida heat, are the seawater temperatures. The station in Miami has lately reported the sea surface temperatures of 87 °F – an all-time record! Almost 10 °F higher than normal for the end of April. To get you an idea – such sea temperature is more typical in July not now!

The much above-normal sea surface temperatures across the Gulf of Mexico are also enhancing the potential for excessive rainfall across the Gulf Coast states in the following months. Higher sea waters mean higher near-surface dewpoints and therefore high moisture content with the frontal systems. And at the end even more extreme instability when severe weather occurs, leading to a higher threat for destructive tornadoes and severe wind events. Since mid-March, the anomalies across the Gulf are exceptional – 1.5-2 °C above the long-term average! 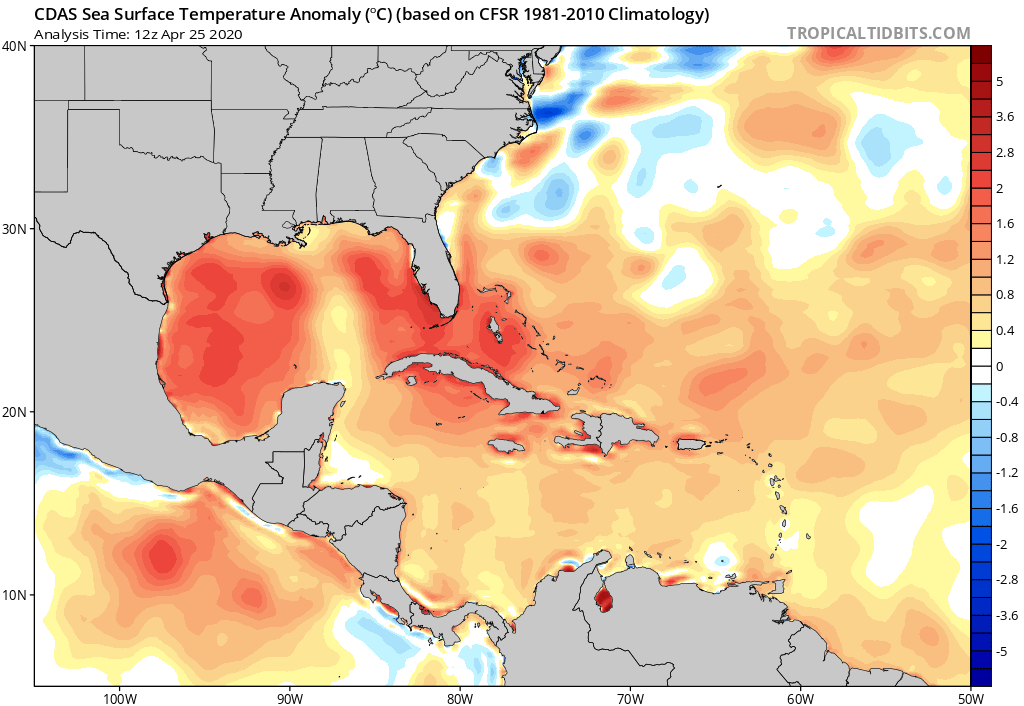 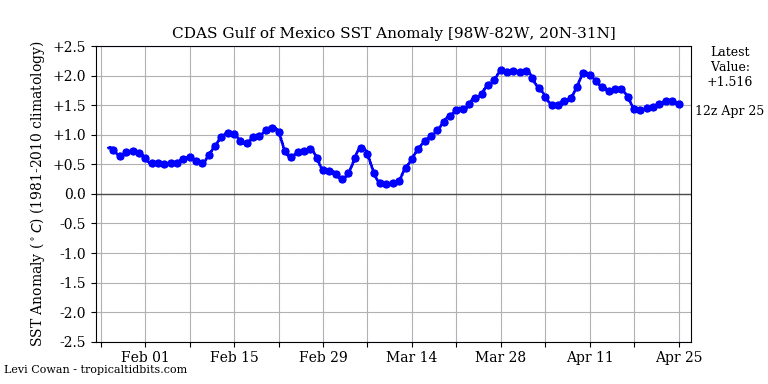 Additionally, a very warm Gulf of Mexico waters could impact the hurricane season 2020 as well, especially resulting in even more extreme amount of rainfall and flooding usually. Even the tropical systems could be stronger with so warm the Gulf!

See also: Hurricane season 2020 overview – could be above average activity