The annual Lyrids meteor shower peaks tonight, so many of us will be out under the skies observing this fine celestial show. Weather permitting, of course. Also, there will be no Moon to disturb the dark night. There are great chances for many observers across both continents. So, let us take a look across Europe what the weather will be like for the 2020’s Lyrids.

How to spot the Lyrids?

Place yourself in a dark sky away from light pollution. Lyrid meteors will appear originating from the area in the sky between the constellations Hercules and Lyra (home of the bright star Vega). This apparent point of origin, known as the meteor shower’s radiant, will be in the northeast after sunset and almost directly overhead in the hours before dawn. 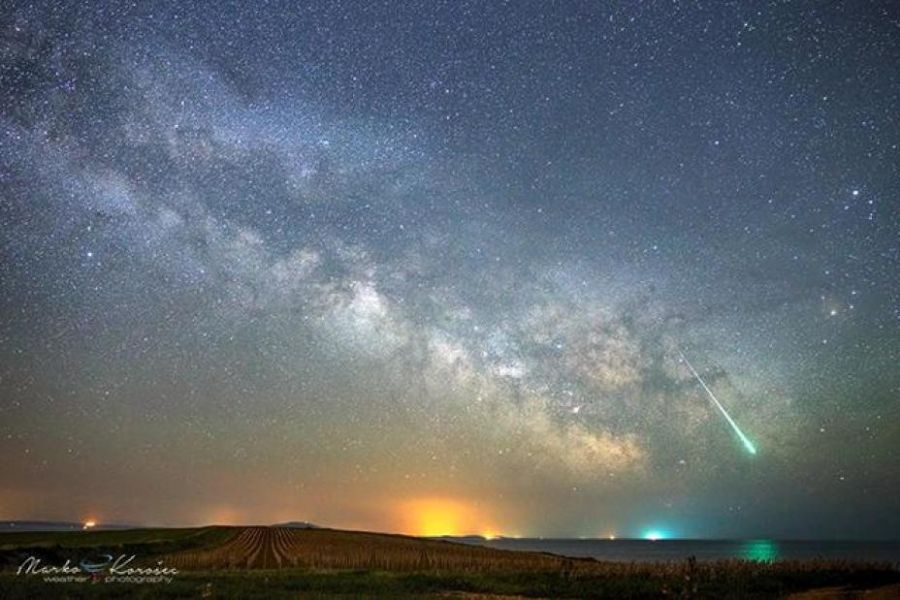 Observing tip: Once you’ve located the radiant, don’t just stare at that spot all night. Longer streaks tend to appear farther from the shower’s radiant, so you might miss the best meteors if your eyes are glued on that singular spot all night (also, focusing on a single point in the dark for so long might strain your eyes).

The current weather pattern across Europe reveals an extensive and very powerful upper-level ridge over the northern half of Europe, while an upper low is centered over the western Mediterranean. The weather pattern over the United States and Canada reveals there is a very deep upper trough across the northeast US and eastern Canada, while a hallow upper low is moving across the southern Rockies. The rest of the countries will see rising geopotential heights which means less moisture and clouds at the end: 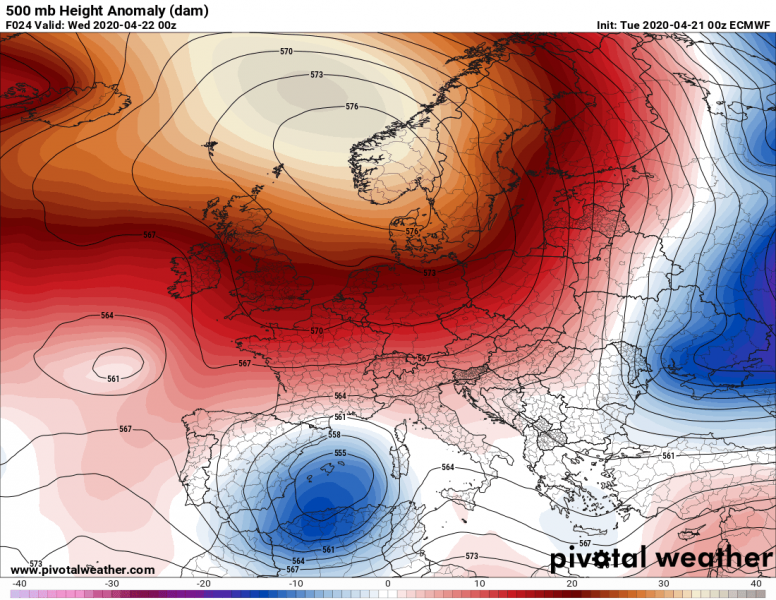 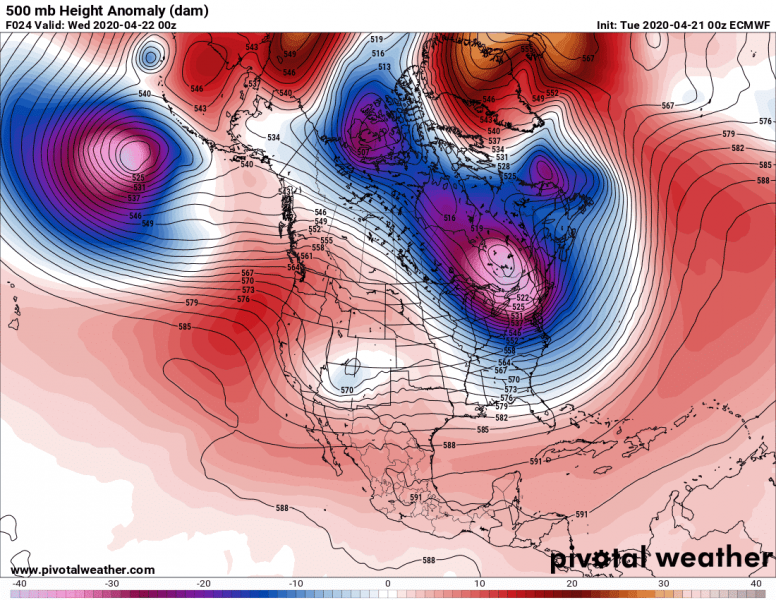 We take a look over the cloud coverage in the low/mid-level height which is the best level for predicting the potential for clear skies. Although high clouds matter too, at least bright meteors are still visible through the high clouds. Low/mid-level clouds completely obscure the meteors and night sky. Best times for observing are from 10 pm local time until about 5 am local time.

Looking at the timeframe around midnight, we can see a large part of Europe is having clear skies! It will be a night without clouds over western, northern and central Europe, partly cloudy over eastern Europe. The main full cloud coverage extends across parts of southern into southwestern Europe with cloudiness associated with the large upper low. This given low chances for good observations in this zone. Overall, we can expect mostly clear skies through the night in many parts of Europe. 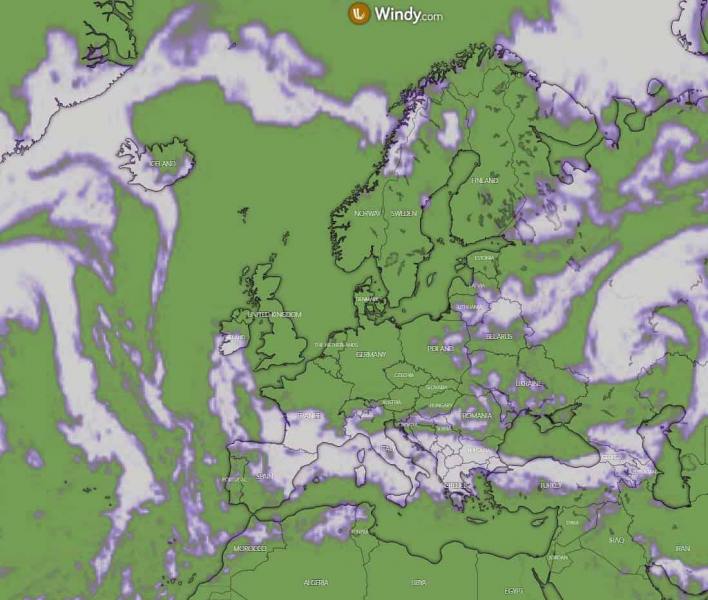 Looking at the timeframe around local midnight in the US, we can see a large part of the country will have a cleat night. There is some cloudiness expected along the frontal wave across the south-central Plains (Kansas, Oklahoma, part of Texas), the northwest US, Great Lakes region and the northeast US. Similar to Europe, we can expect mostly clear skies through the night in many parts of Europe. 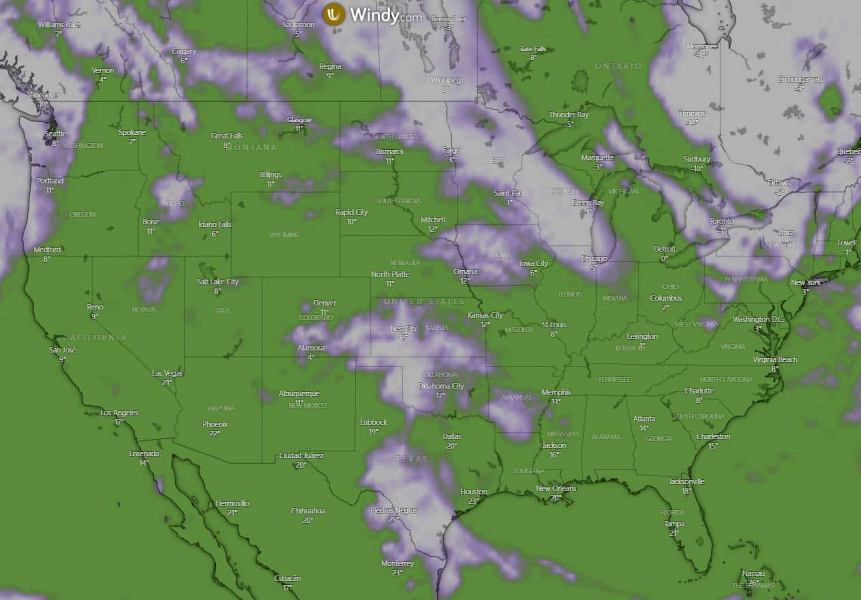 Let’s take a look at mid-level clouds forecast for Europe, per WRF model. These maps also reveal completely clear skies across much of central, western and northern Europe, partly cloudy over southwestern Europe. It is expected to be cloudy across southern France, northern Spain, south-central Italy, and southern Balkans. So we can see there are great conditions with mostly clear skies over much of the northern half of Europe and central Europe. 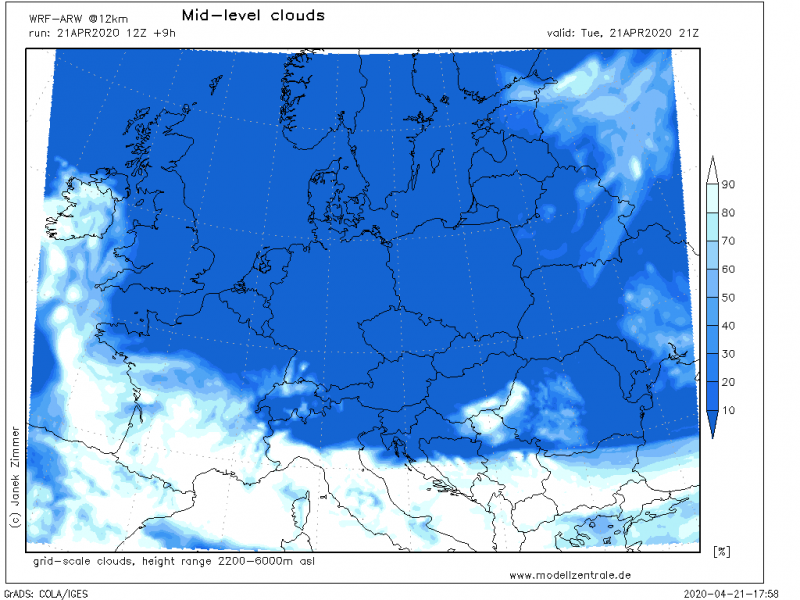 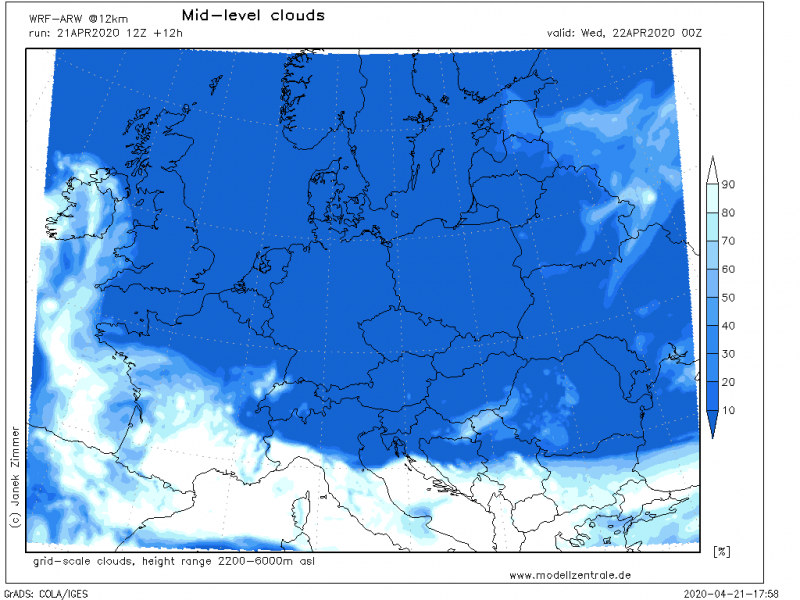 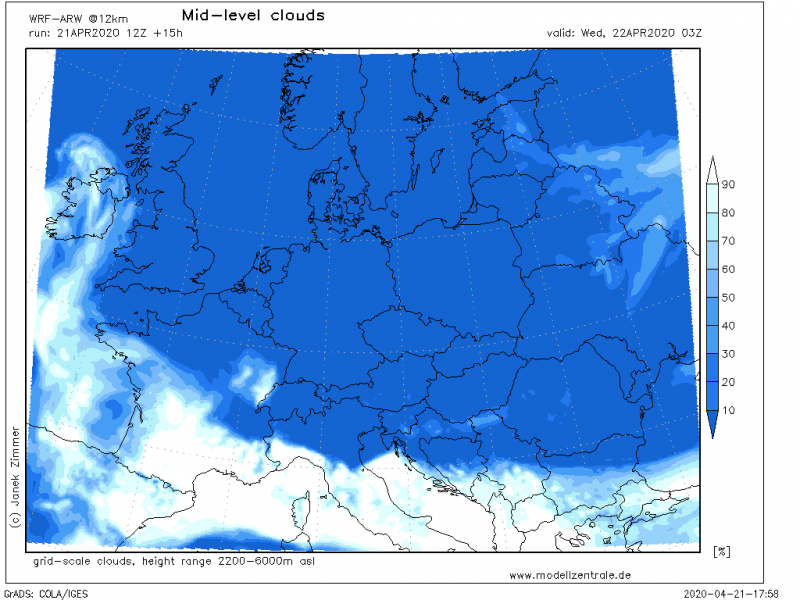 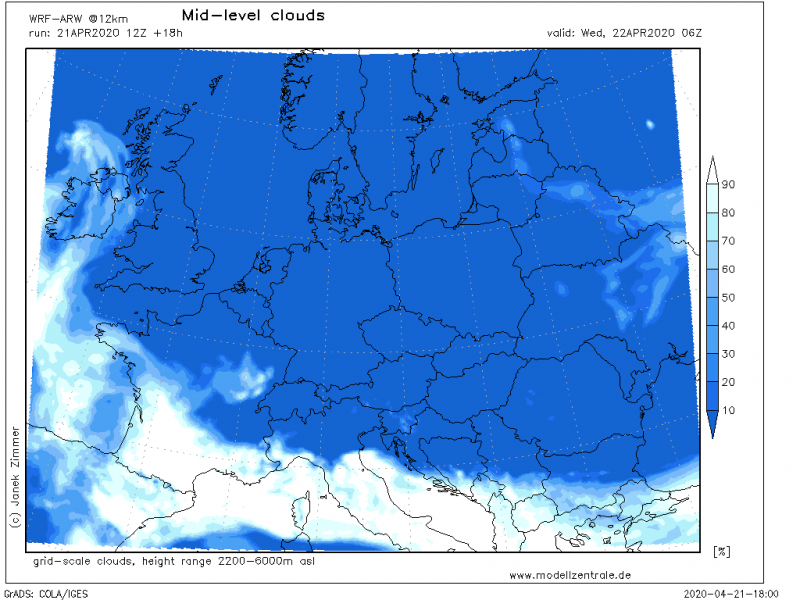 We wish you fun and pleasant observations and enjoy the Lyrids show tonight! Expect up to 10-20 meteors per hour in the morning (pre-dawn) hours. We welcome you to report us your observations and send photos – report via our Twitter and Facebook profiles or ="mailto:[email protected]">