Whilst a new year has arrived, northern Australia is still feeling the influence of a 2022 event. Ex-Tropical Cyclone Ellie has been wreaking havoc across northern Australia over the past few weeks in conjunction with a burst of the Madden-Julian Oscillation (MJO). Whilst this pulse has now shifted east, the remnants of Ellie continue to linger through the interior of the continent.

During an active monsoon in late December, Friday 23rd saw Tropical Cyclone Ellie born off the west coast of the Northern Territory. Although Ellie was a weak category 1 system, the slow-moving nature of the system signified the potential for long periods of heavy rainfall. Ellie didn’t disappoint!

Over the ensuing days after crossing the coast, Ellie weakened quickly. For the last two and half weeks, Ellie has meandered across the Northern Territory before drifting west and hovering across the western Kimberley region of Western Australia. It’s here with Ellie’s remnants dropped torrents of rainfall. 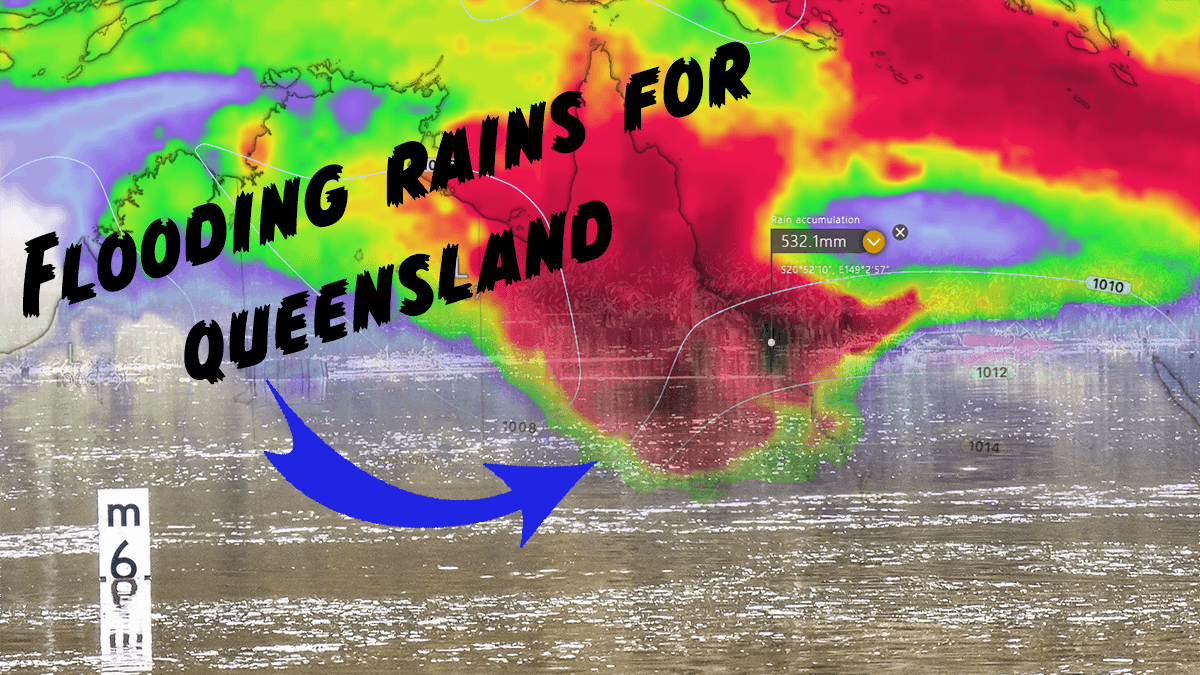 WHAT IS A TROPICAL CYCLONE?

Tropical cyclones are areas of low pressure that form over warm tropical waters. These systems generally form over waters where sea-surface temperatures are around or greater than 26.5°C. In Australia, tropical cyclone is categorized from a 1-5 scale, with 1 being weak (relatively speaking) up to category 5.

Ellie was a category 1 system when it crossed the Northern Territory coast, with winds gusts to 125km/h. In comparison, a category 5 system packs wind gusts in excess of 280km/h. 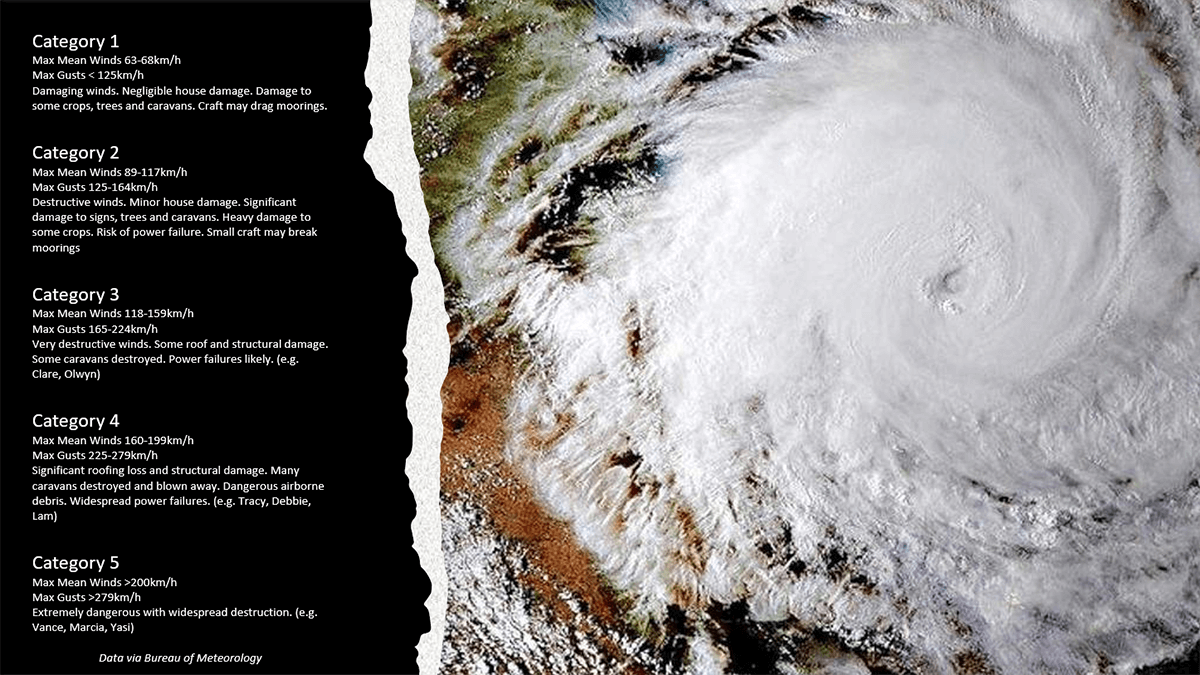 Did you know that an Australian island known as Barrow Island holds the record for the strongest wind ever recorded? It recorded a staggering gust of 407km/h or 253PMH as Severe Tropical Cyclone Olivia battered the region on April 10th, 1996. This eclipsed the previous record held by Mount Washington’s 371km/h (231MPH) from April 12th, 1934. 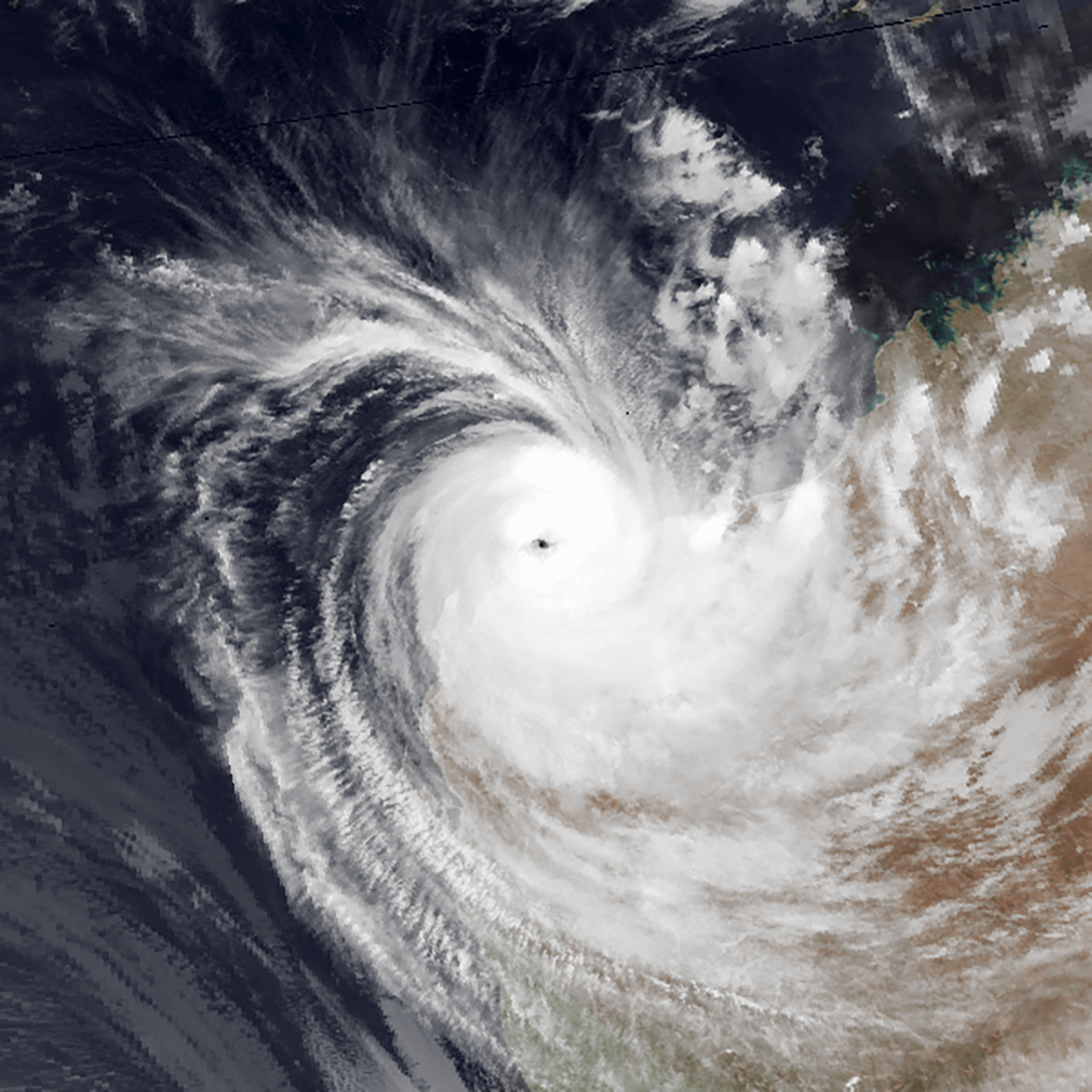 Severe Tropical Cyclone Olivia. Image via By The National Oceanic and Atmospheric Administration

As Ellie’s remnants drifted south and west, torrential rainfall was recorded. Napier Downs, in the NT, recorded 544mm in the week up to January 3rd. Siddens Creek in Western Australia registered the highest daily total of 228mm in the 24 hours to 9 am on January 2nd. Due to the slow-moving nature of Ellie, daily totals of 150-250mm were a regular occurrence, particularly across the western Kimberley region of WA.
Widespread rainfall accumulation of 400-800mm was recorded over the first week of January, leading to record-breaking flooding. The heaviest falls occurred across the western parts of Kimberley. Broome situated along the coastal fringe has registered 565.4mm since January 1, 2023. 400km inland, flooding across the Fitzroy Crossing eclipsed the 2002 level of 13.95m, peaking at a staggering 15.81m. 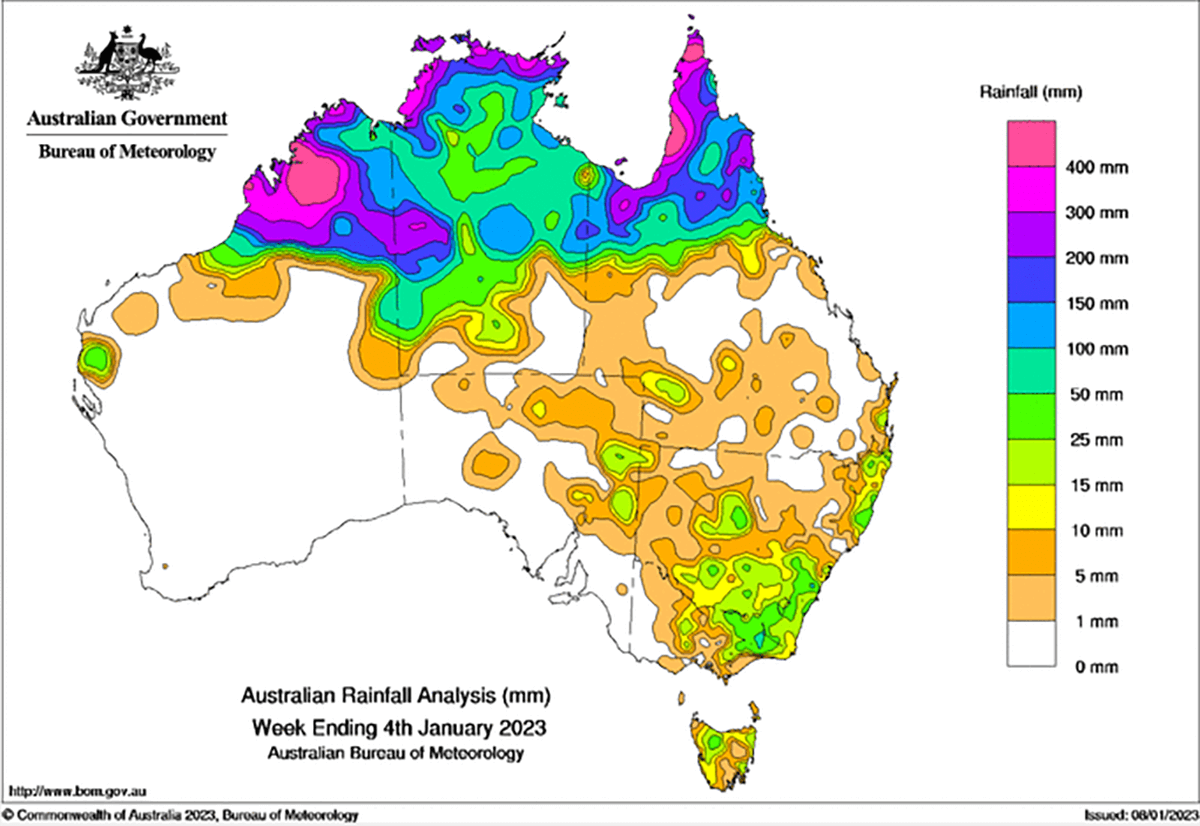 Although vast regions of northern WA are unpopulated, major flooding across this area resulted in communities being cut off. Highways have been swamped by flooding, with numerous roads and bridges being completely washed away.

The unprecedented nature of this flooding is making it extremely challenging and difficult for emergency services. This includes the relocation of affected people and getting supplies into the flood-affected regions. 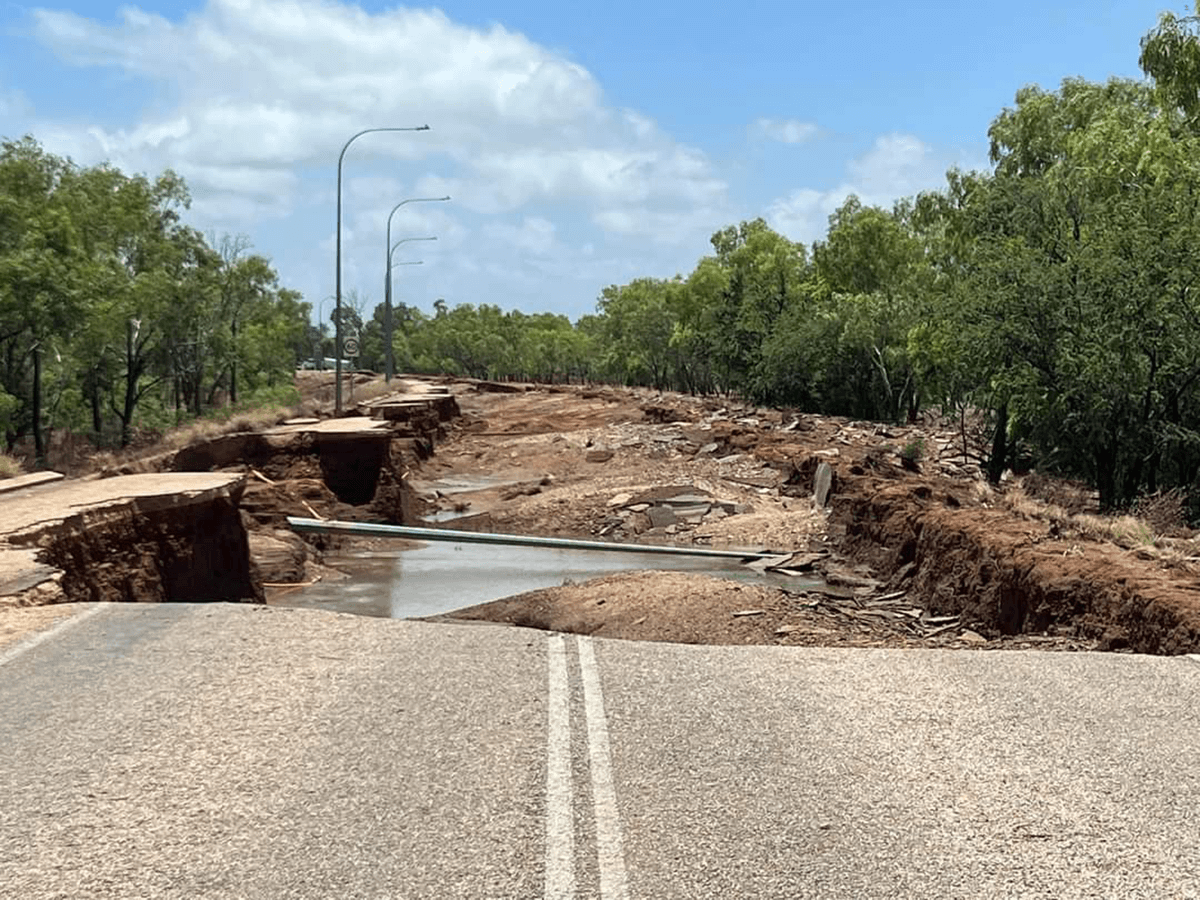 Road washed away in the Kimberley. Image via Alyssa Storer

As ex-TC Ellie stalled across the Kimberley it dumped copious amounts of rain. In recent days this system has been steered back east along the interior of WA and into southern parts of the NT. Increasing moisture through this region ignited severe storms for Alice Springs and its surroundings. To 9 am on the 9th of January, Alice Springs picked up 84mm, Undoolya 84mm, and Mount Lloyd 85mm. This downpour was Alice Springs wettest January day in 22 years.

WHAT LIES AHEAD FOR ELLIE

Over the next several days, Elli’s remnants will steadily drift east. Moisture-laden air will be fed through the interior of Queensland. This will lead to a multi-day thunderstorm outbreak through the interior of the state and for northern regions. Whilst the severe storm threat will be a daily proposition, convective rainfall is expected to increase in coverage. With a lack of any substantial upper-level disturbance likely over the coming week, numerous clusters of slow-moving rain and storms may produce daily totals of 50-150mm for some locations. 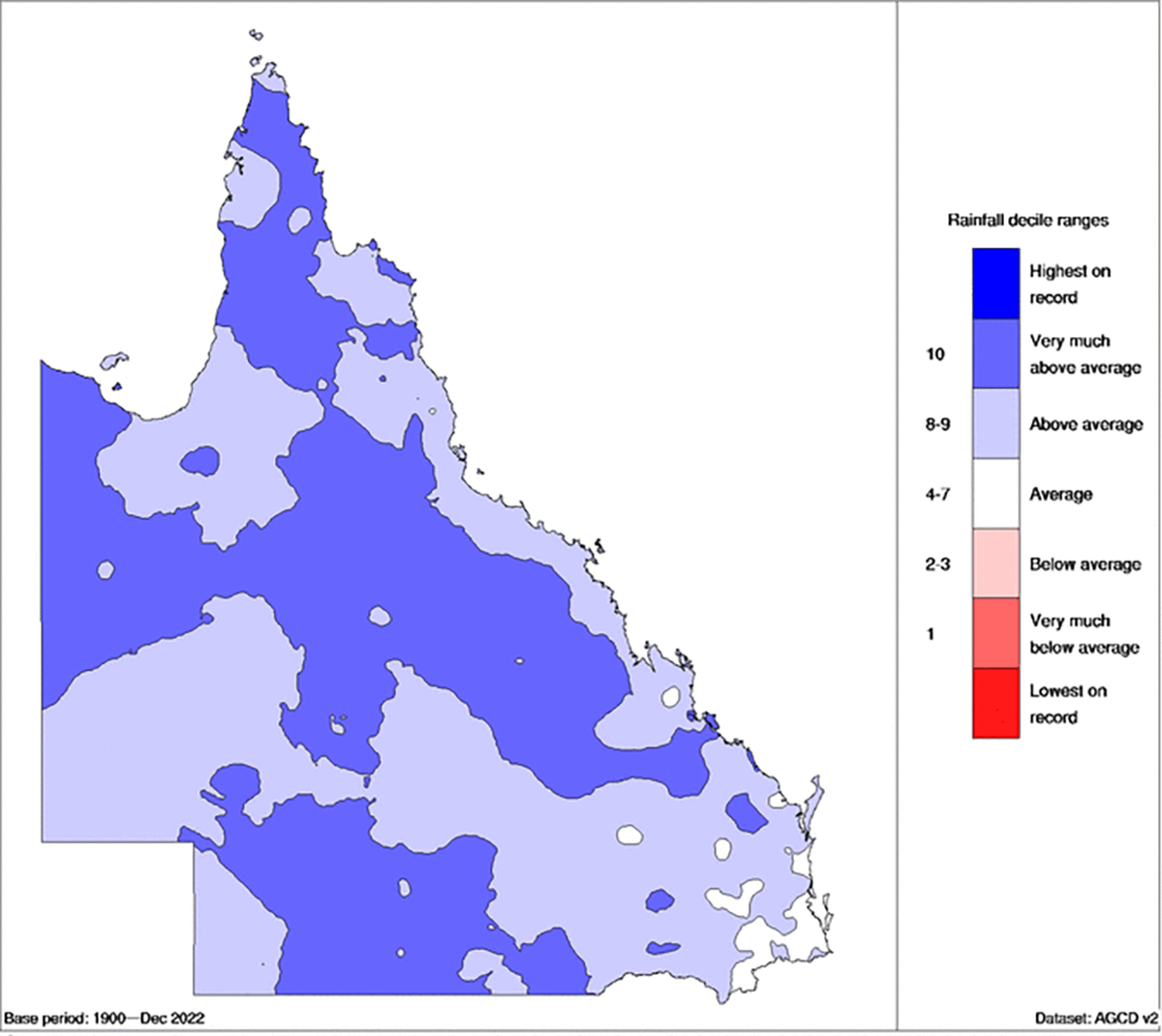 Disturbingly, a couple of forecast models signify the potential for a tropical low or coastal trough to develop off the North Queensland coastline in the 7-10-day period. Should this occur, very heavy rainfall will also develop across coastal regions of Qld. Although this is common and expected for this time of year, this region, too, has experienced heavy totals will the MJO and monsoon in recent times.

Weipa, in the eastern Gulf region of Queensland, has already picked up 516mm since January 1st, 2023. This rainfall resulted from strong bursts of monsoon westerly winds with numerous days of thunderstorm activity. Weipa picked up a daily high of 237.2mm on Saturday 7th. 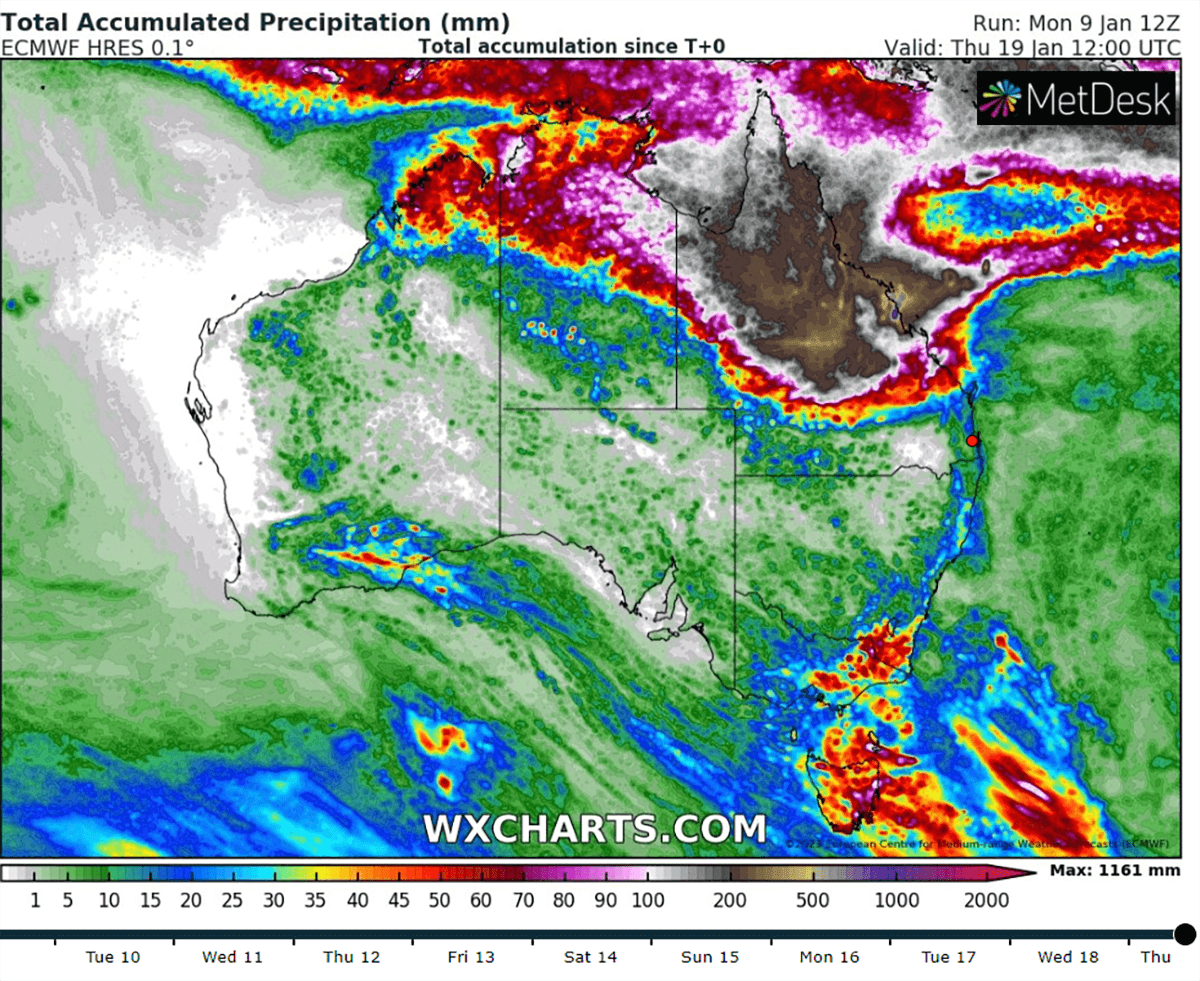 With the rain that has fallen and the forecast rainfall to come, it is shaping up to be a wet January for northern Australia. This falls in line with overall rainfall for Australia during 2022. The national rainfall was 25% above the 1961-1990 annual average. This made 2022 the ninth-wettest year on record. Thankfully, a triple dip (third), La Niña is now weakening. Despite this, a nasty sting in its tail can still be felt, particularly on the east coast of Queensland from January to March. This includes the potential for significant tropical cyclone development.

Australia was also warmer than average in 2022. The national mean temperature was 0.50°C warmer than the 1961-1990 average. This made 2022 the equal 22nd warmer year on record since the national temperature records began in 1910.

Images used in this article provided by Windy, BoM, MetDesk

Monsoonal conditions will increase across northern Australia this week, with flooding to develop across the barren interior of the country as a tropical low shift south