Despite northern Australia regularly seeing hot conditions, heatwave conditions are classified by the Bureau of Meteorology as having persistent above-average minimum and maximum temperatures for this time of year. 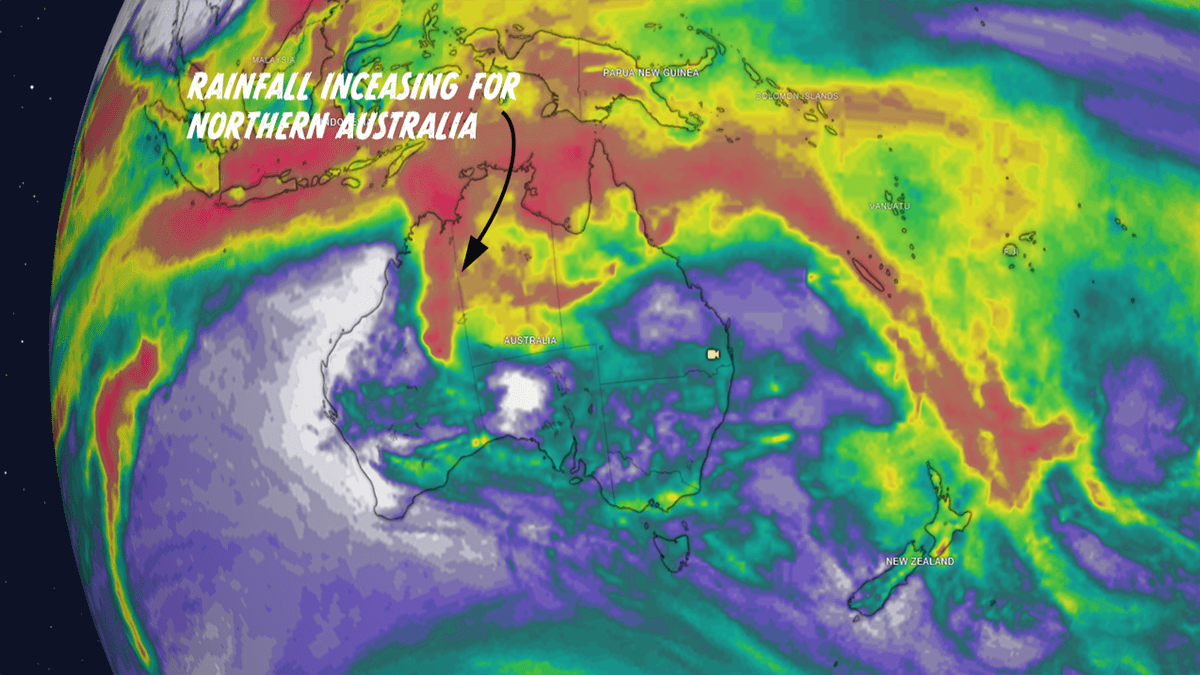 WHAT IS THE MJO?

The MJO or Madden-Julian Oscillation is an area of enhanced rainfall that arises across the Indian Ocean and propagates eastward towards the Pacific. This eastward-moving pulse of wind and rain typically occurs every 30-60 days. Its effects are most prevalent across the Indian and western equatorial Pacific. An MJO pulse can influence the strength and development of the Australian monsoon, increasing the threat of above-average rainfall across northern Australia.

The MJO consists of 8 phases (1-8). During phase 1, enhanced rainfall will develop over the western Indian Ocean. Phases 2 and 3 will see this rainfall shift eastwards over Africa, the Indian Ocean, and parts of India. During phases 4 and 5, this enhanced rainfall shifts across the Maritime Continent of Indonesia and the West Pacific. As the MJO shifts into phases 6, 7, and 8, the area of rainfall shifts further eastwards over the western Pacific as it gradually weakens and dies across the Central Pacific. Once this occurs, the next MJO cycle begins.

Phases 5 and 6 of the MJO have the greatest impact on rainfall across northern Australia. 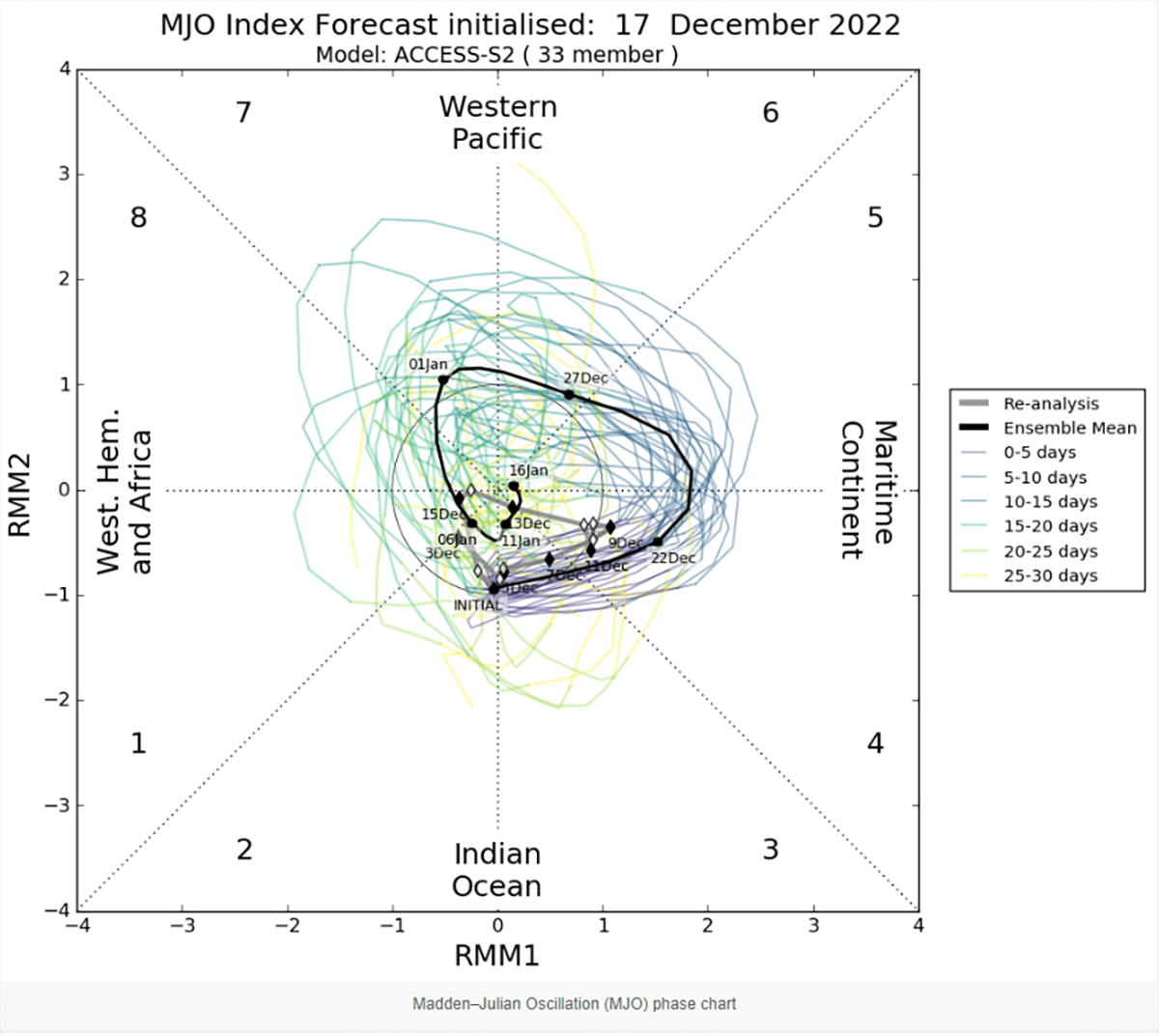 A tropical low is forecast to develop in the Timor Sea within 24-48 hours. This low will then shift in a south-southeast direction. This will increase rainfall and thunderstorms across parts of the Northern Territory and eastern Western Australia.

Moderate to heavy rainfall is set to increase as this low approaches, with falls of 50-100mm expected. Whilst this tropical low may develop into a tropical cyclone. This threat is considered low.

Late Thursday and into Friday, this low will gradually strengthen whilst producing areas of very heavy rainfall across western parts of the Top End, including Darwin. This system isn’t likely to pose much in the way of a wind threat. GFS and ACCESS models hint at having a stronger system which may increase this threat; however, the more reliable EC and ICON models keep this low quite tame wind-wise.

Regardless, a threat of localized damaging winds to 90km/h may develop. This threat will be greater for Western Australia and the Northern Territory coastal regions. 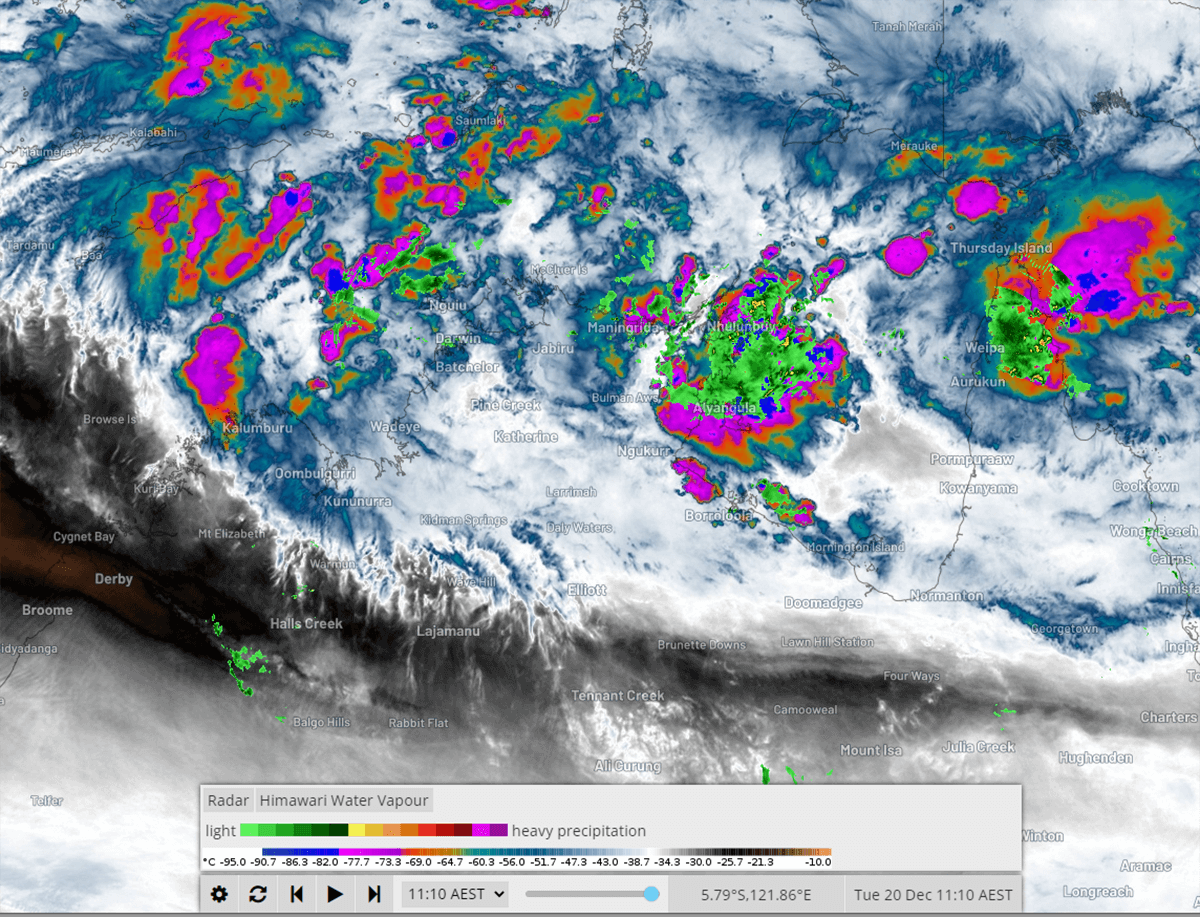 As this low continues to drift south toward the interior of Australia, a vigorous northern airstream will increase across the Top End. A continuation of heavy showers, rain, and severe thunderstorms is likely to continue. Localized thunderstorms will significantly increase the rainfall threat for this region, with the potential for 100-200mm to fall within a few hours under any storm activity. This low is expected to meander across inland Australia next week, with rain and storms continuing.

Flooding will likely develop for several catchments across the Northern Territory and eastern Western Australia in response to increasing rainfall. The Bureau of Meteorology has issued a flood watch for later this week. Numerous areas of inland Australia have already seen several rain events so far this spring after a strong Indian Ocean Dipole. 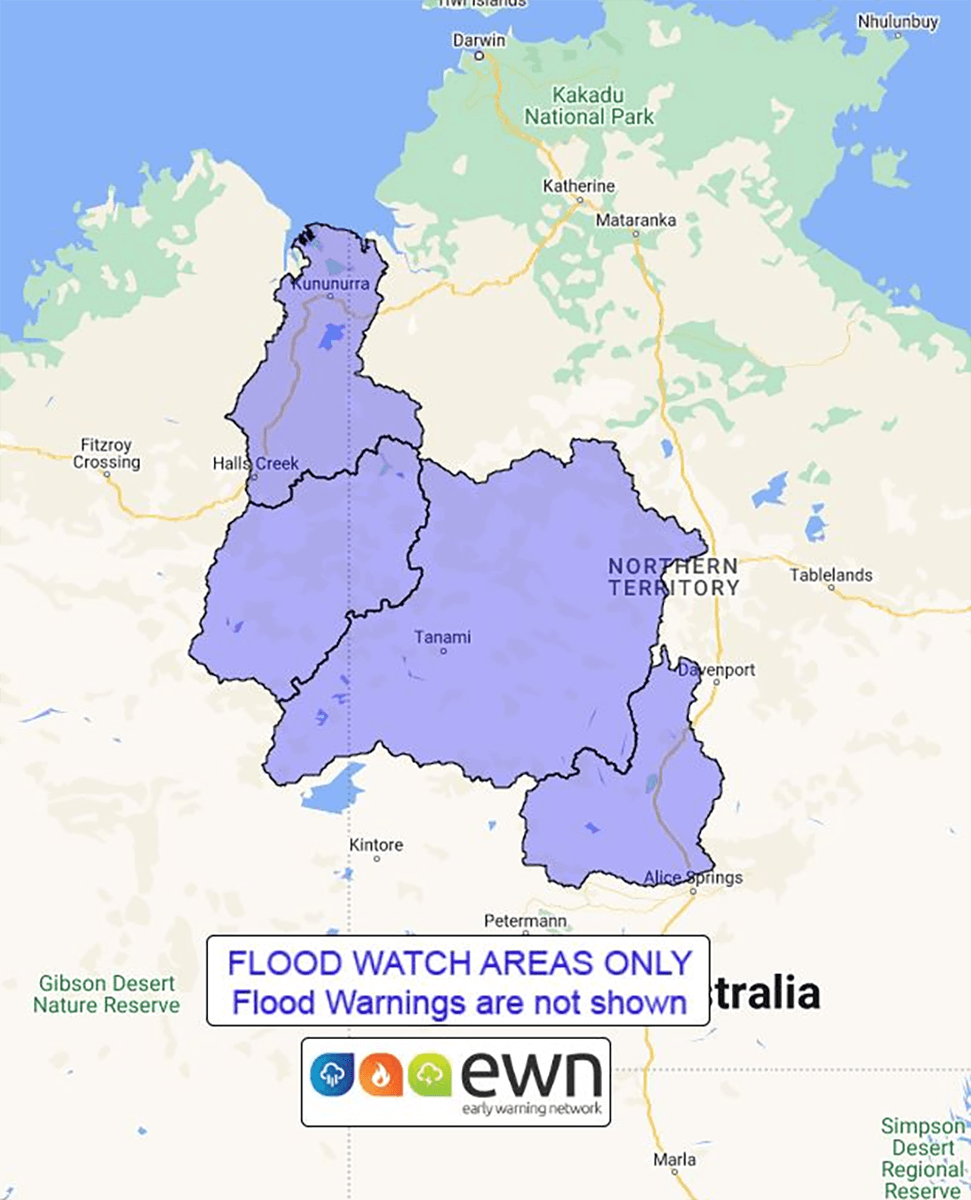 5-10 day rainfall totals of 300-400mm will be possible for coastal regions. However, this is highly dependent on the strength and movement of this tropical low. A slow-moving low will have the potential to produce significant rainfall and riverine flooding. Conversely, a faster-moving system would see rainfall quicker.

This rainfall will increase the threat of flash flooding and riverine flooding in this region. Gusty winds will affect coastal regions with an increase in wave heights possible.

Southern parts of the NT, inland WA and northern parts of South Australia expect rainfall to increase in response to a tropical low later this week. This rainfall will fall on the back of days of severe thunderstorm activity. A moist easterly flow has been feeding an inland trough across the country’s interior. This surface trough, in combination with a series of upper troughs, has produced widespread storm activity through inland WA, SA, NT, and western Queensland.

Severe thunderstorm warnings have been issued over the past several days, with more expected over the coming days. Whilst no significant severe weather reports were observed, these regions of Australia are sparsely populated.

WHAT DOES THIS MEAN FOR CHRISTMAS DAY?

Sadly, it will be a damp Christmas day for inland Australia. Prolonged flooding is expected across parts of the interior, cutting off roads and communities. Further showers, storms, and rain periods will continue to aggravate this region’s rivers.

The good news is that fine and warm conditions are expected for southern Australia. A ridge of high pressure will dominate the region ahead of the next trough across the west.

Tropical Cyclone Darian became the first cyclone of the 2022/2023 season within Australia’s area of responsibility. The severe category 4 system (on the Australian scale, with wind gusts of 224-279km/h) is currently located around 590km west-southwest of Cocos Island. It is moving southwest at around 10 kilometers per hour.

This system will continue to drift westerly over the coming days. Darian is then expected to drift out of the area of responsibility for Australia. Tropical Cyclone Darian poses no threat to the Australian mainland. 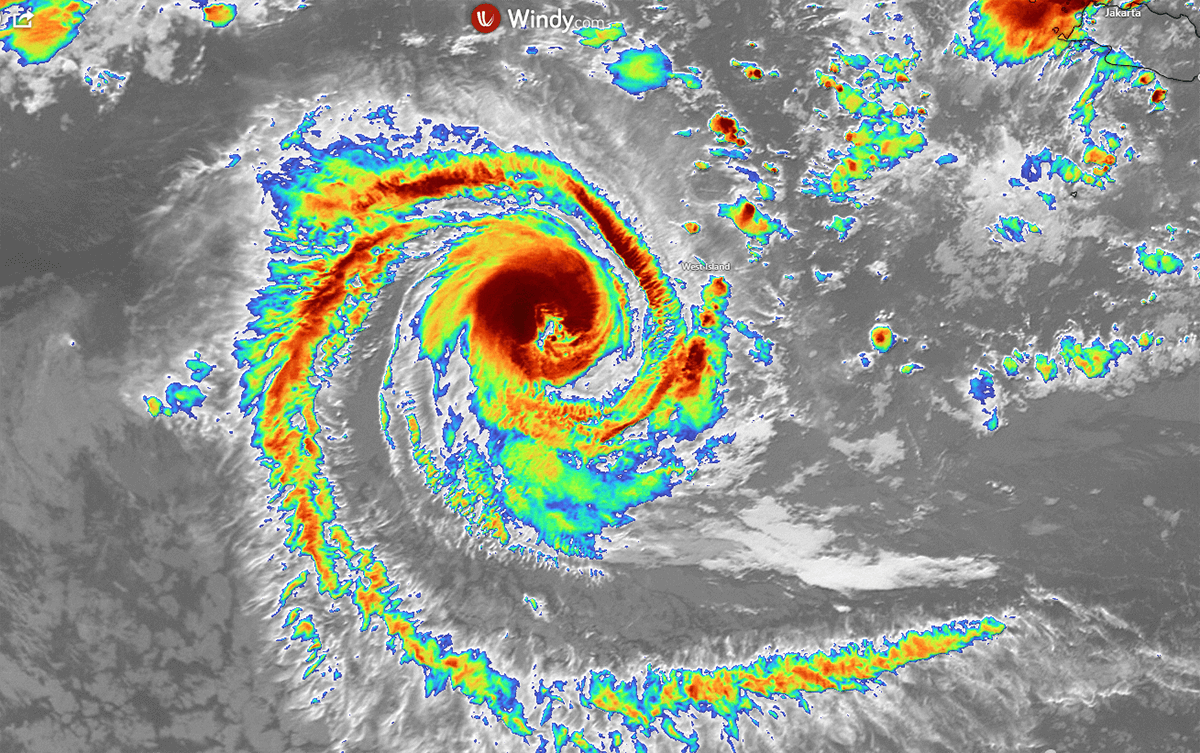