Christmas 2021 is just a few days, so we take a look at the weather forecast for the upcoming holidays. An Arctic outbreak and a winter storm are forecast for western Canada while a strong, potentially historic blocking High and warmth is forecast for the United States. We also include our traditional White Christmas outlook potential for both Canada and the mainland U.S.

It is that time of the year when we are not only looking at the winter weather charts, but many are also interested in the chances to experience a white Christmas, next Saturday, Dec 25th.

A wild weather pattern is on the charts this year. The ongoing intense Polar Vortex and disturbances due to the stratospheric events are already responding into lower parts of our atmosphere as we can see in the following image.

In between, deep troughs (negative, colder colors) are forecast to develop across western North America and over the North Atlantic, affecting both Canada and the United States. The video below gives us a brief idea of the very dynamic weather pattern that will be ongoing this week into the holiday weekend.

So, when was the last time you experienced falling snow on a Christmas Day in your town? Although the definition for White Christmas says 1 inch of measurable snow on the ground, it certainly isn’t the same if it is not snowing.

Let’s take a look into details how the weather will be for the holidays this year.

The general weather pattern will begin changing through mid-week with a strengthening blocking High across the southern portions of North America. Farther west, a very powerful ridge takes place over the northern Pacific, leading to a deep trough sliding south on its eastern flank.

As the trough digs deeper south along the West Coast, it helps the ridge across the U.S. to lift farther north and strengthen further. So it creates a dome of high pressure near the surface. Winter storm takes place in western Canada at the same time. 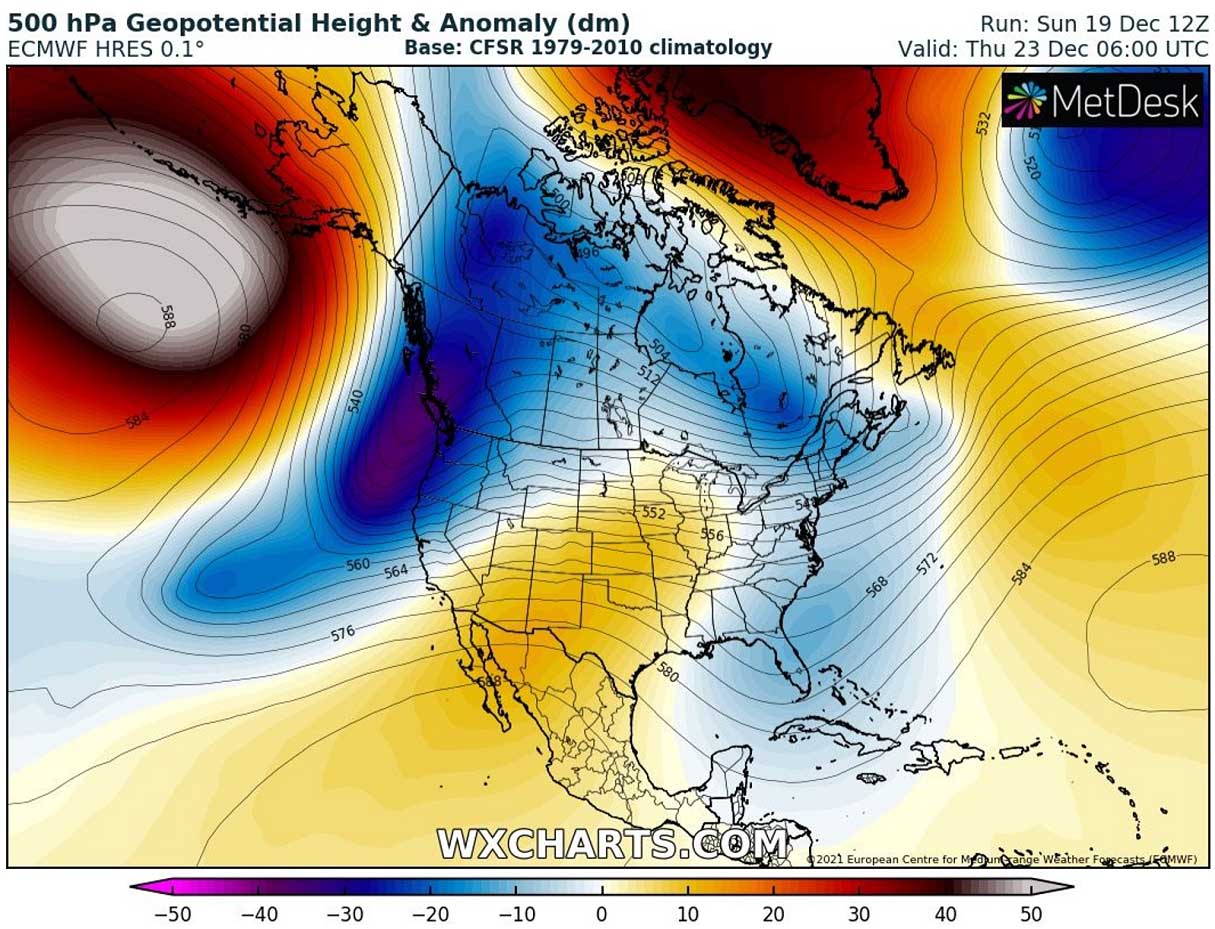 The attached 850 mbar temperature anomaly reveals how good the correlation is between the upper and the mid-levels. Under the blocking ridge, a normally much higher dome of heat is placed. This can be seen over Alaska and especially across the central United States and partly also over southern Canada on Thursday.

The temperature contract is huge. From the nearly 20 °C below normal in western Canada to around 20 °C across the central U.S. If we thought the heatwave last week was strong, this will be even more intense.

The unpreceded close-up map of 850 mbar temperature anomaly across the United States for the pre-Christmas day. An astonishing 20 °C above normal for this level is going to bring some extremely high daytime temperatures near the surface.

Basically, most of the Contiguous U.S. will be under the effect of this strong blocking High and heat dome. The center of the ridge will be across the Midwest but will extend from Mexico on the south to southern Canada on the north.

Under the deepening upper trough/low in western Canada, an extreme anomaly of temperatures well below normal is forecast. Those are nearly 22-24 °C colder than usual for the end of December at the 850 mbar level (approx. 1300m or 4200 ft).

The ridge across the US quickly responds with the increasing warmth as well. It will nearly be the opposite to the cold in Canada, with more than 20 °C warmer than normal air mass developing.

While the upper ridge of the strength over the North Pacific also brings quite warmer air mass into western Alaska by Thursday and Friday. In between these two blocking Highs, a much colder air mass (generally 25-35 °F below normal) overspread western Canada states, also affecting Southeast Alaska. The contrast is really impressive!

Attached are now the near-surface (2m) charts which are even more extreme.

As we can see, it will be *extremely* warm pre-Christmas Day across the Great Plains. Parts of Texas, Oklahoma, and Kansas are forecast to experience the daytime peak temperatures of low to mid-80s, surely challenging some December (daily) heat records.

The warmth under the High aloft will spread far north and push the low 60s into Nebraska and Iowa, mid-50s into South Dakota and eastern Wyoming.

The reason behind such a pattern is the Omega blocking which means that we have a large dome of pretty stable and often above-normal temperatures weather beneath it, appearing similar to the shape of the Greek alphabet letter.

The flow when such a pattern evolves is moving around the core of the High, creating a shape of an Omega with the wind patterns (jet stream). Meaning that the winds blow from south to north on the western side, rounding to the north of it, and then turning from north to south on the eastern side of the block. Thus its appearance looks just like an Omega letter.

Once the Omega blocking begins weakening in response to the deep trough in western Canada aloft, a powerful jet stream develops in between the both. This separates cold from the warmth but also helps to transport the extremely warm air mass far towards the north.

What is very impressive to see developing around Christmas Day is the eye-catching dipole weather pattern across the northern Pacific and western North America. While an extremely strong upper ridge (High) takes place over Alaska and the Aleutians, a significantly deep trough digs into western Canada and Northwest U.S.

This leads to a strong transport of much colder, Arctic air mass in between these two large-scale features far towards the south. The flow will be pure meridional, so from north to south towards the Pacific Northwest. As the trough dips farther south, it pushes the ridge towards the east. 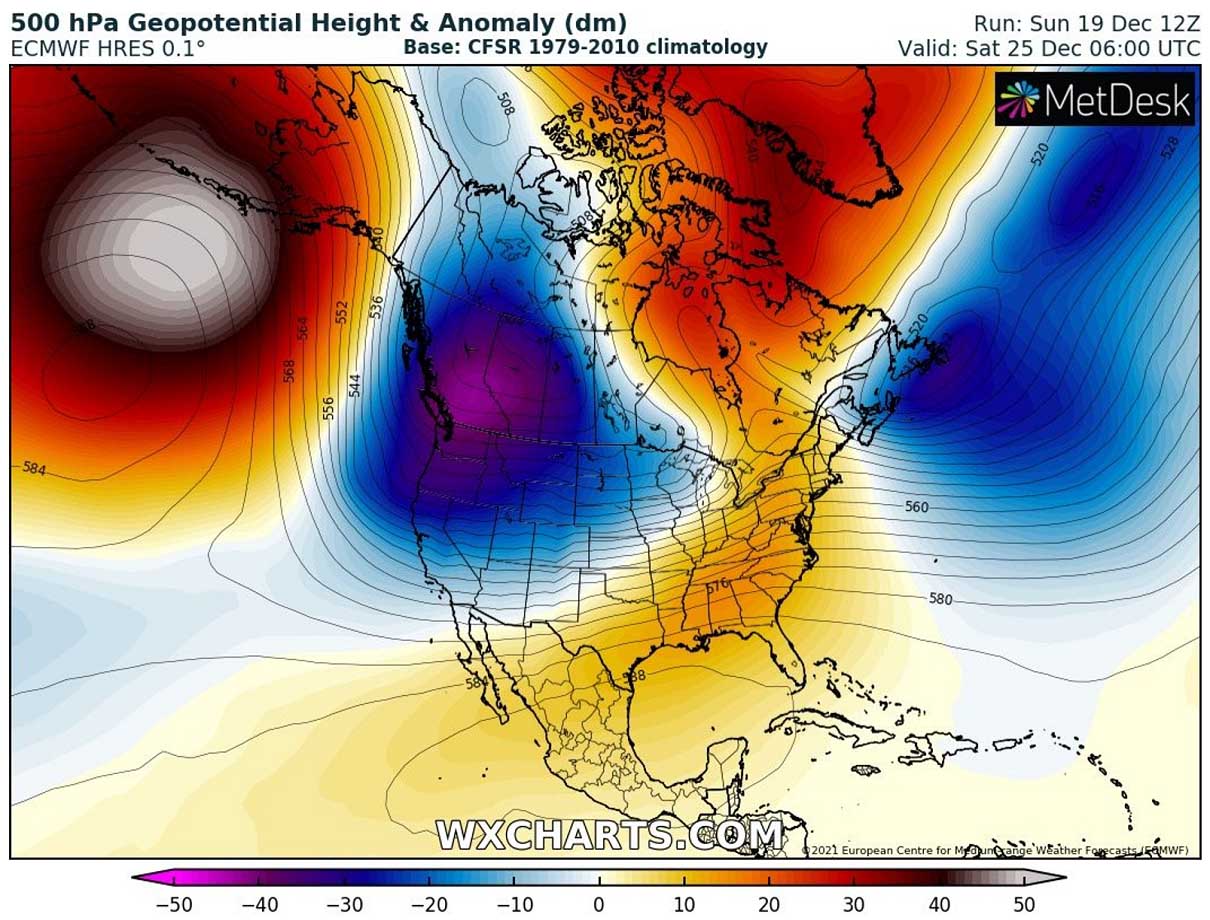 The scale of the extreme cold in western Canada becomes even more frigid on Christmas Day. The cold temperatures spread most of the western part of the North American continent, being the worst across the northwest part.

The 2m temperature anomaly across British Columbia, Alberta, Northwest Territories, and Yukon will be exceptional. Nearly 50 °F below normal for Christmas Day is brutally cold even for these areas who are used to extreme cold.

It will be very warm, locally possibly even record-breaking warm Christmas Day across the central U.S. Temperatures will be in the upper 70s to low 80ss across the South, in the 70s across Oklahoma, the mid-Mississippi Valley, Southeast US, and Florida. Ohio Valley and Midwest will also have a very warm Christmas, up to mid/upper 60s are possible.

Colder weather is forecast across the Dakotas, Upper Midwest to the New England, but it will still be much warmer than normal. At least Montana will be under the influence of the extreme cold from Canada, the maximum temperatures around -5 °F are forecast on Christmas Day. Even colder weather will be farther north.

This is a closer look over the morning temperatures across the Northwest U.S. and western Canada for Christmas. Temperatures will plunge even below -30 °F in Canada, down to around -10 °F in northern Montana. Alberta should see a very cold Christmas morning, below -20 °F in some areas.

It will be well below freezing morning also across Wyoming, Idaho, and North Dakota, as well as northern and western South Dakota and across interior Rocky mountains. Locally morning low should plunge to around 10 °F.

So, what about the winter and snow potential forecast for white Christmas across the United States and Canada this year?

Most of the winter weather fans were probably dreaming of a white Christmas when we were young, right? Indeed it depends on where you live, the odds are high or basically very poor. As per the NOAA statistical map below, a definition for a white Christmas is when there is at least 1 inch (2.54 cm) of measured snow depth on the ground on Christmas morning, Dec 25th. 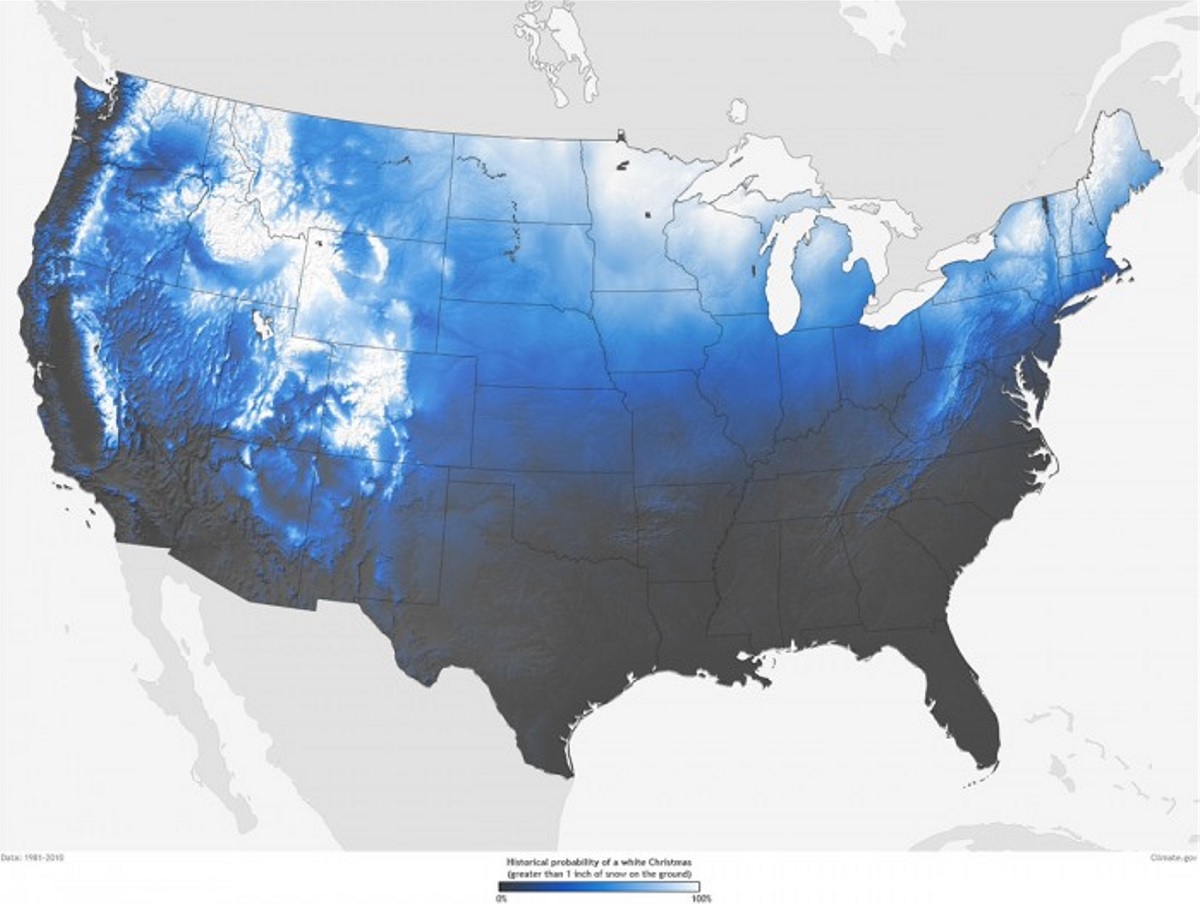 The map above is provided by NOAA

As we see above, historically speaking, the highest chances are Minnesota, Maine, Upstate New York, the Appalachians, Idaho, the Rockies, or the Sierra Nevada Mountains. These areas are typical with the best chance of a white Christmas.

The chart above reveals the historic probability for at least 1 inch of snow on the ground in the Lower 48 states on Christmas day. While the white colors represent those places where the probabilities are greater than 90 percent. Farther north in Canada, snow is normally covering the ground in most of the country.

The darkest grey colors represent places where the probability is less than 10%, so we can see that basically the West Coast, the Southwest, South, and the Southeast of the Contiguous United States have very low probabilities for white Christmas as the statistics go.

Indeed the map hints at the historical probability that a snow depth of at least 1 inch will be observed on Christmas day, and the snow depth can vary from year to year. Recent decades have shown even poorer numbers due to warming weather in general.

The Christmas Day this year will have snow on the ground across the whole of Canada, and Alaska, as well as across the Northwest and for the Northeast U.S. Thanks to the new snow that is forecast to fall through Saturday morning, areas from the northern Rockies across Dakotas, Upper Midwest and northern Great Lakes (including southern Canada) will have a White Christmas.

As we could see from the map below, decent amounts of snow are likely to accumulate. Farther south across the rest of the Contiguous United States, snow is not expected due to a significant warmth that develops prior to Christmas.

Here is the new snow accumulation forecast across the Great Lakes and Northeast US this week through Christmas. The amounts of snow will not be particularly high, but snow will disturb the holiday travels for many in the region.

The highest amounts of snow are forecast across southern Ontario with this winter storm, as well as across the state of Maine and further northeast into eastern Canada. Newfoundland could see about 15-20 inches of new snow by Saturday.

A closer look over the new snow forecast across the Northwest US and the northern Rockies is seen on the chart below. Where the orographic precipitation is usually the strongest, especially around the highest peaks of mountain chains. The snow accumulations will be from 20-40 inches or even more, possibly again counting into several feet.

However, fresh snow is also forecast across Nevada, Utah, western Colorado, parts of Wyoming, and quite of it across Montana and Idaho. Some areas are forecast to receive 10-20 inches through Christmas Day. A couple of inches also from eastern Montana across Northern Dakota to Minnesota. 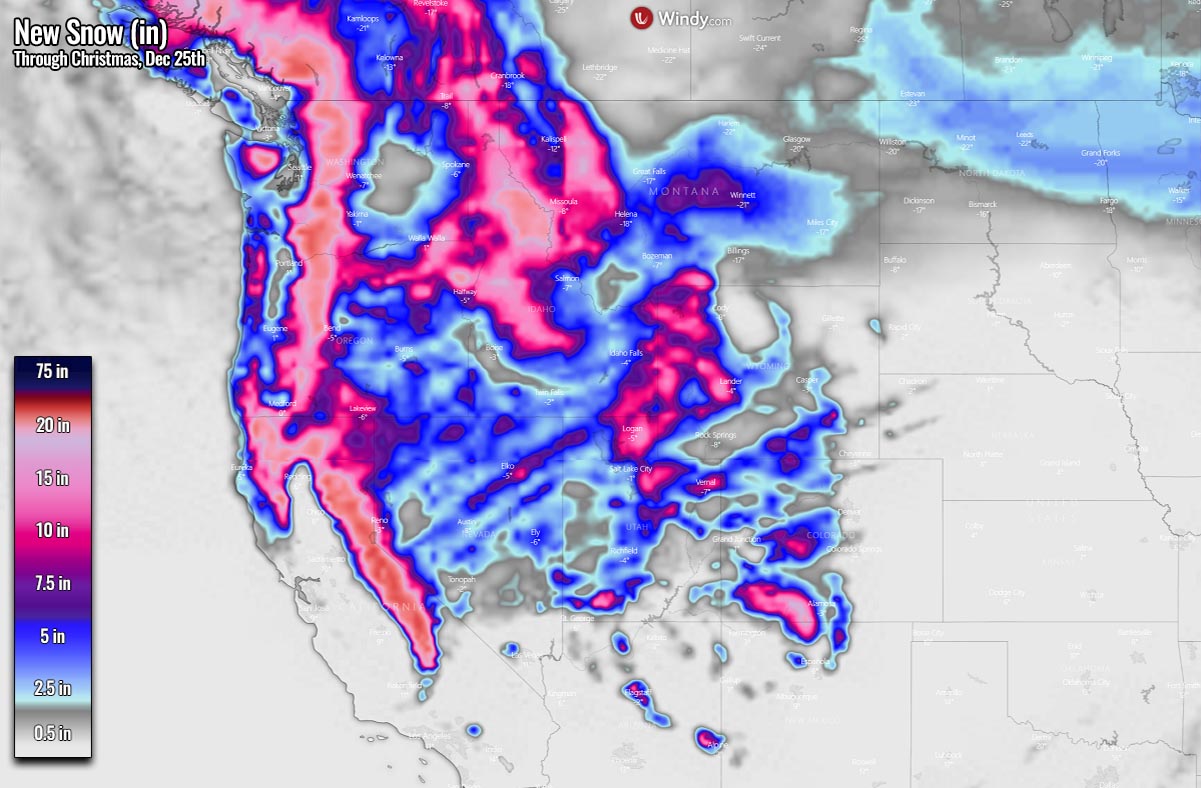 Under the influence of the very intense Arctic cold outbreak into western Canada and partly also Alaska, some good amounts of snow are also expected there. The majority of the snow will fall along the Pacific Northwest of Canada and the United States.

Some areas could receive up to around 15-20 inches, indeed even more in the higher mountains. 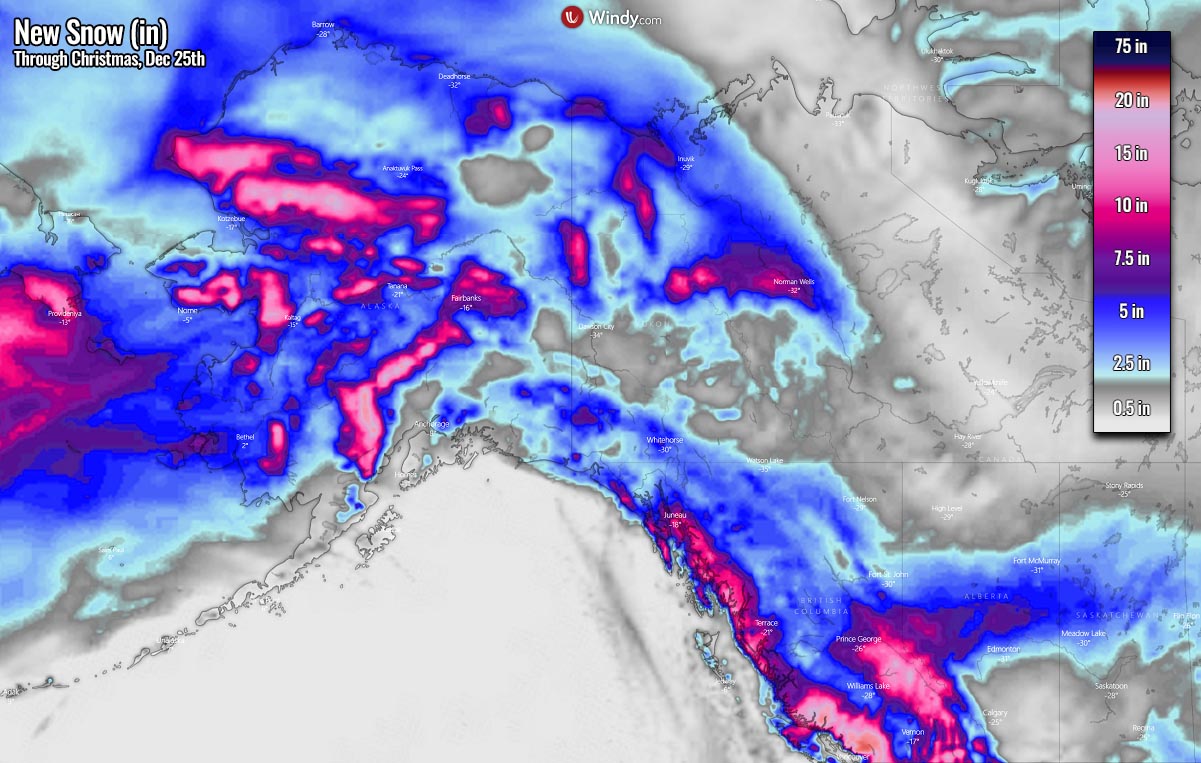 Images in this article were provided by Windy and Wxcharts.

A Massive Cold Outbreak Heads for Europe This Week