After dynamic weather through autumn season, Europe has seen a lot of changes back and forth also this month. It’s actually been quite wintery in many areas, we could say the start of the first winter month is good. Now, with a powerful Omega blocking High established across western Europe and North Atlantic, a massive cold outbreak blast into parts of Europe this week. But with such a progressive weather pattern, what are the odds for white Christmas forecast across Europe this year? Let’s see the final weather model trends.

It is that time of the year when we are not only looking at the winter weather charts, but many are also interested in the chances to experience a white Christmas, coming up next Saturday, Dec 25th. When was the last time you experienced snow for Christmas in your area?

What’s first on the weather menu ahead is a pretty strong cold outbreak shaping up to take place across parts of Europe after Monday. This happens in response to a collapsing blocking High farther west. The cold will be pretty intense, actually. While the weather pattern remains dynamic also later towards Christmas day. 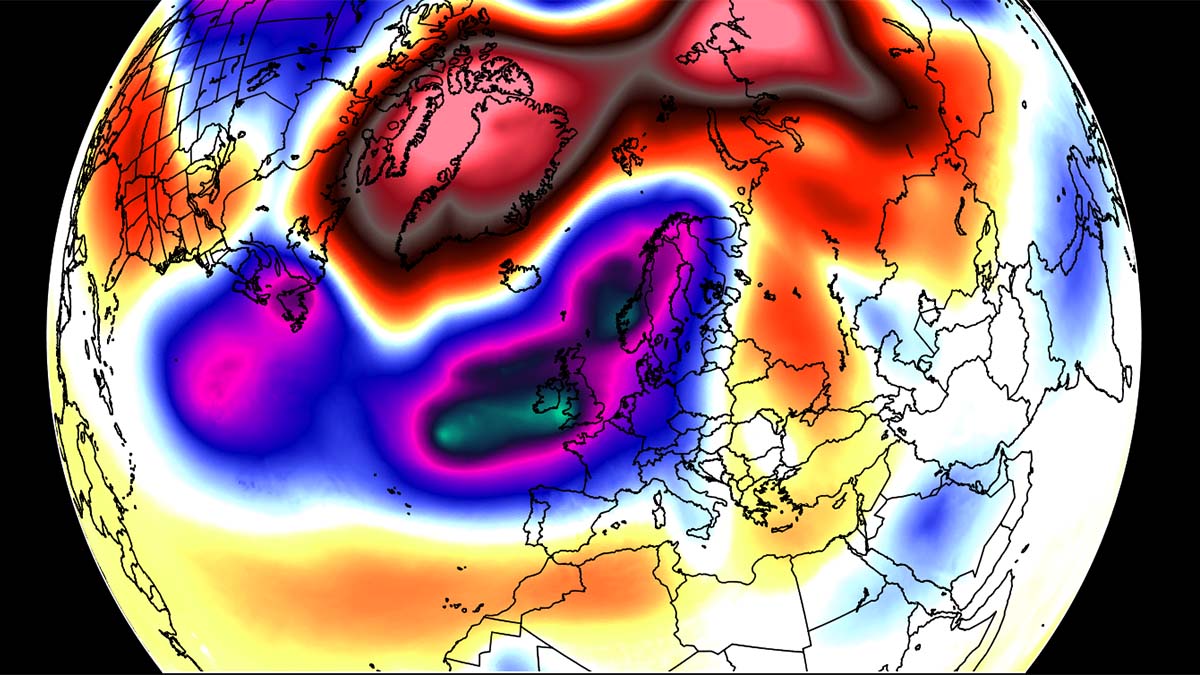 After the strong blocking begins weakening, it also shifts north into the Arctic region. This leads to a channel of more westerly flow across the Atlantic towards Europe. It brings colder weather back to northern Europe and washes out the cold outbreak away towards the east, back to Russia.

The attached video represents the further dynamic weather pattern across the North Atlantic and Europe, revealing the aforementioned significant cold outbreak across the eastern and partly the central parts of Europe before the Atlantic flow takes over and the pattern flips again.

Further below, we will check out the preliminary trends and weather forecast for the white Christmas and the probabilities of snow cover on December 25th. Let’s go across the pattern evolution step by step this Christmas week.

Over the recent days, a strong Omega blocking High has been established across a large part of western and central Europe, as well as over the Atlantic Ocean. The Omega blocking means we have a large dome of pretty stable and often above-normal temperatures weather beneath it, and the shape of the Greek alphabet letter.

The flow is moving around the core of the High, creating a shape of an Omega with the wind patterns (jet stream). Meaning from south to north on the western side, rounding to the north of it, and then turning from north to south on the eastern side of the block. Thus looking just like and Omega letter. The satellite image below hints at such a jet stream pattern this Sunday, it rougly follows the yellow line.

Normally, a pattern with an Omega blocking High has an upper trough/low on each side. That is why winds correspond in between these large-scale features as we described above. After this weekend, the High is gradually coming to an end, pushing its core farther north towards the Arctic region.

Usually, this means changes are coming on its eastern flank, as the move of the ridge towards the north works as a disturbance for the Polar Vortex aloft. So our eyes are focusing on the eastern side of the block that is already shaping up the development of an intense and deep upper low, gradually trending towards the south.

As we mentioned earlier, the characteristics of the Omega blocking contribute to the two lows developing on each side. Once the High moves north, the eastern low begins its more dominant phase as an intrusion of the Arctic air shifts towards the south. This is ongoing across northeast Europe and northwestern Russia right now. 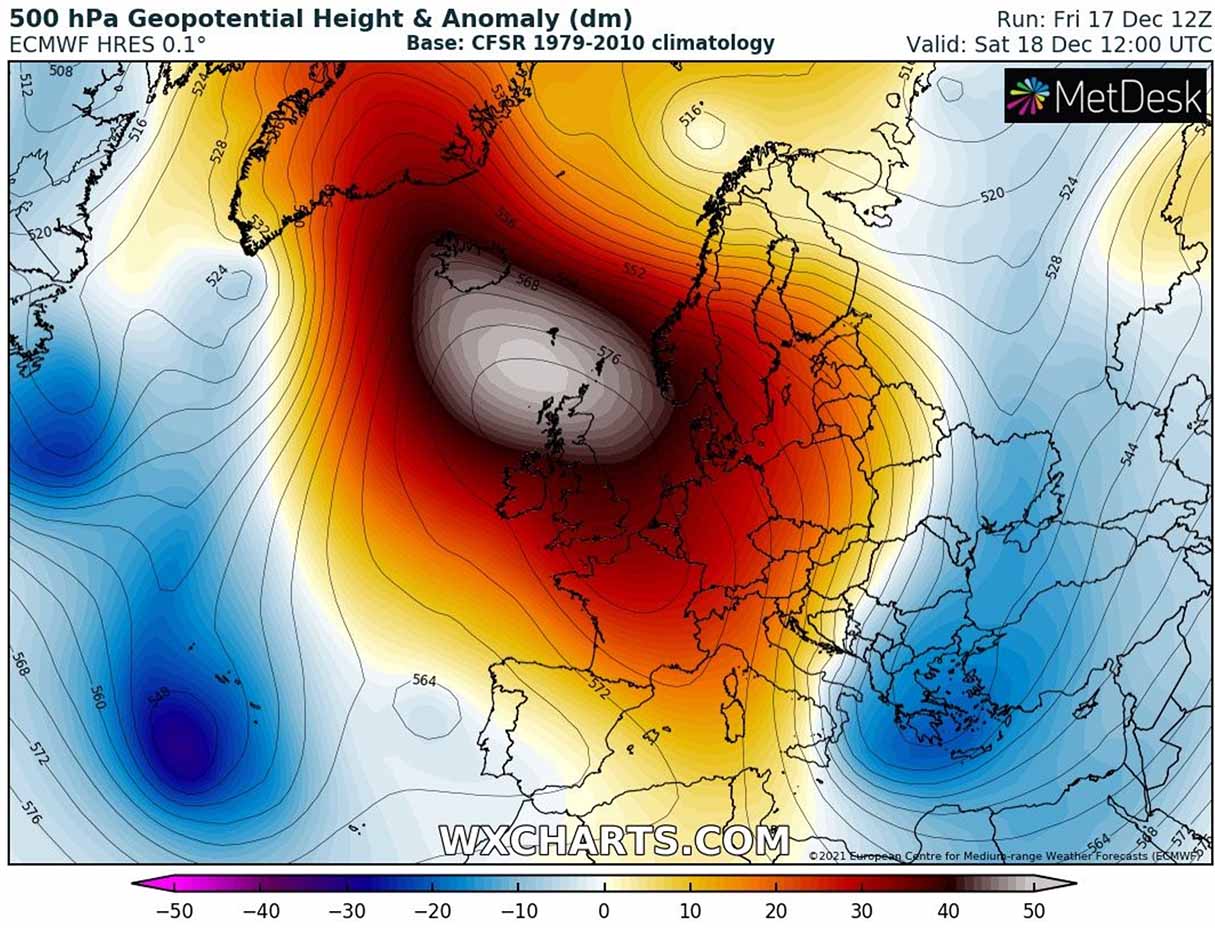 Thanks to the push from the north, a frontal system is taking place beneath the low aloft, intensifying into a cold outbreak across Fennoscandia, the Baltic region, and eastern Europe on Monday. Significantly colder temperatures are spreading fast towards the south, being more than 12 °C below normal.

With Europe divided literally into two halves, there is barely any limitation for the cold progress farther towards the south. The attached chart below is for Monday afternoon where we can see the intense cold spreading across the Baltic region in the wake of the surface low over northwestern Russia. A textbook set up for a massive cold outbreak. 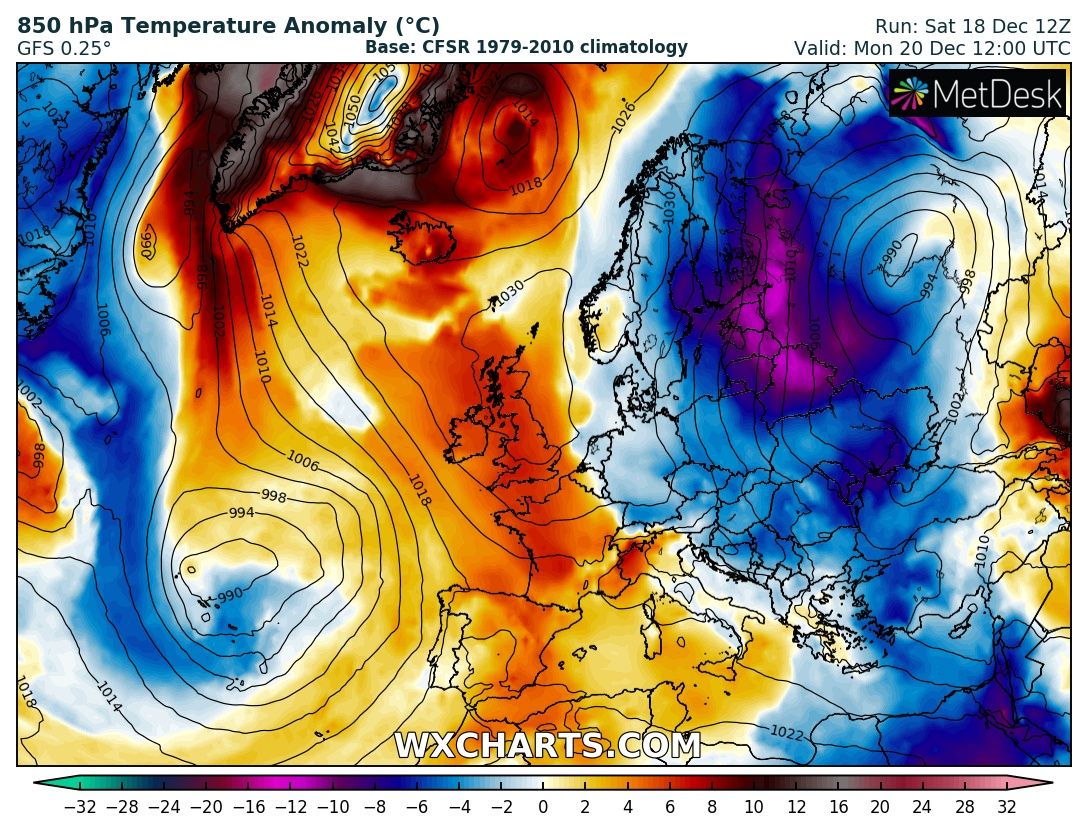 The rest of Europe remains relatively mild, with the warmest air across the west and also far North Atlantic, basically under the weakening ridge. While the cold outbreak to the east keeps intensifying as we head into Tuesday and Wednesday, gradually spreading farther south into the Balkan peninsula, and towards central Europe.

The cold reaches its peak on Wednesday, being the most intense across eastern and southeastern Europe, especially across Ukraine. Nearing about 15 °C is below normal for this time of the year. Daytime temperatures will remain much below freezing these days. 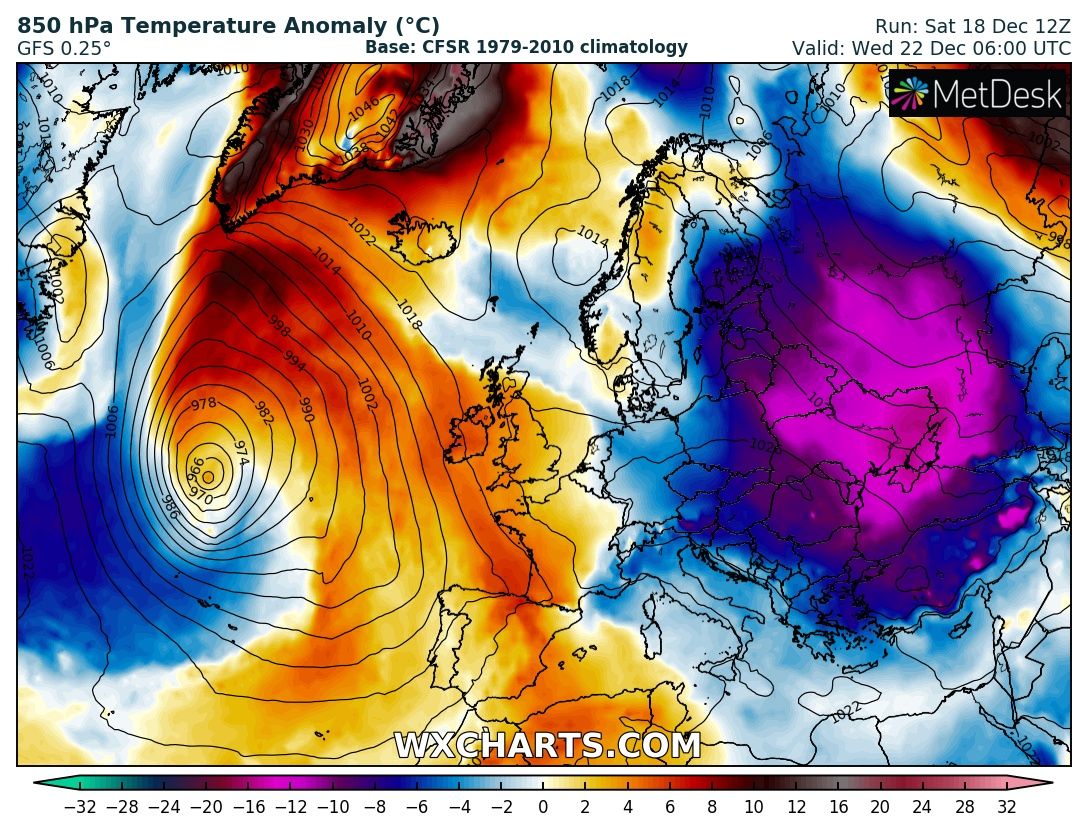 What we can also notice on the attached chart above is the change over the North Atlantic. If we have been seeing the blocking High these days, the pattern is flipped. A large depression takes place after the intrusion of colder air from Canada into the warmer Atlantic, developing strong cyclogenesis.

This means the flow to its south turns westerly, thus the potential for warm advection increases into southern and southwestern Europe once again.

BUT WHAT’S NEXT AFTER THIS COLD OUTBREAK? WELL, OOPS…

Through mid-week, the deep low on the east shifts back towards Russia, and the cold vanishes. The North Atlantic is taking over the weather pattern. A large and deep trough now develops around the Azores, dominating the flow into Europe, turning it into westerly. 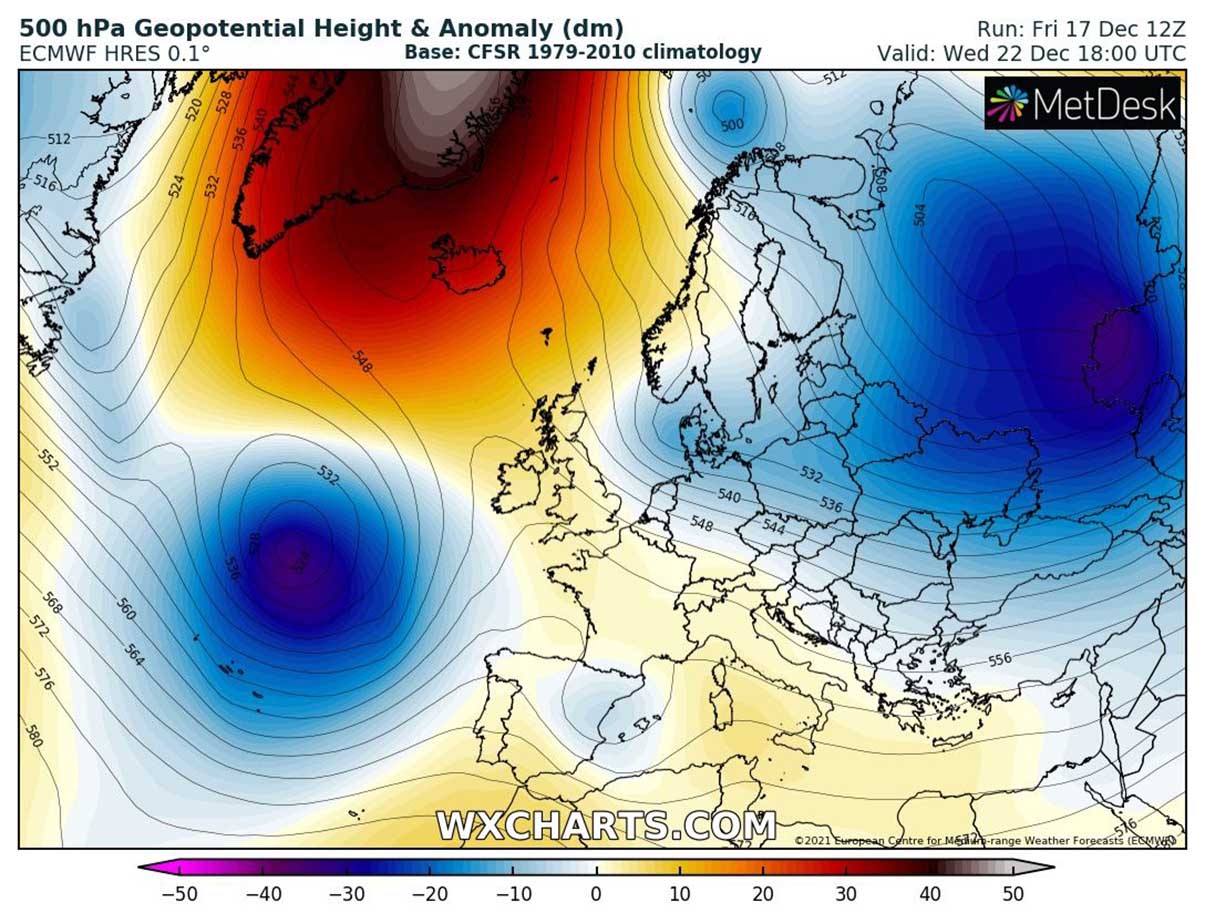 Therefore the blocking High that was still over the far North Atlantic moves even deeper into the Arctic region, releasing another cold-core towards northern Europe. This creates a significant battle of the air masses from the warmer Atlantic and colder Arctic.

Looking over the mean sea-level pressure chart forecast for around Christmas Day, we can see how a well-established channel of lower pressure extends from eastern Canada across the Atlantic into western Europe, continues towards northern Europe. Allowing warmth to spread deeper into continental Europe with time. 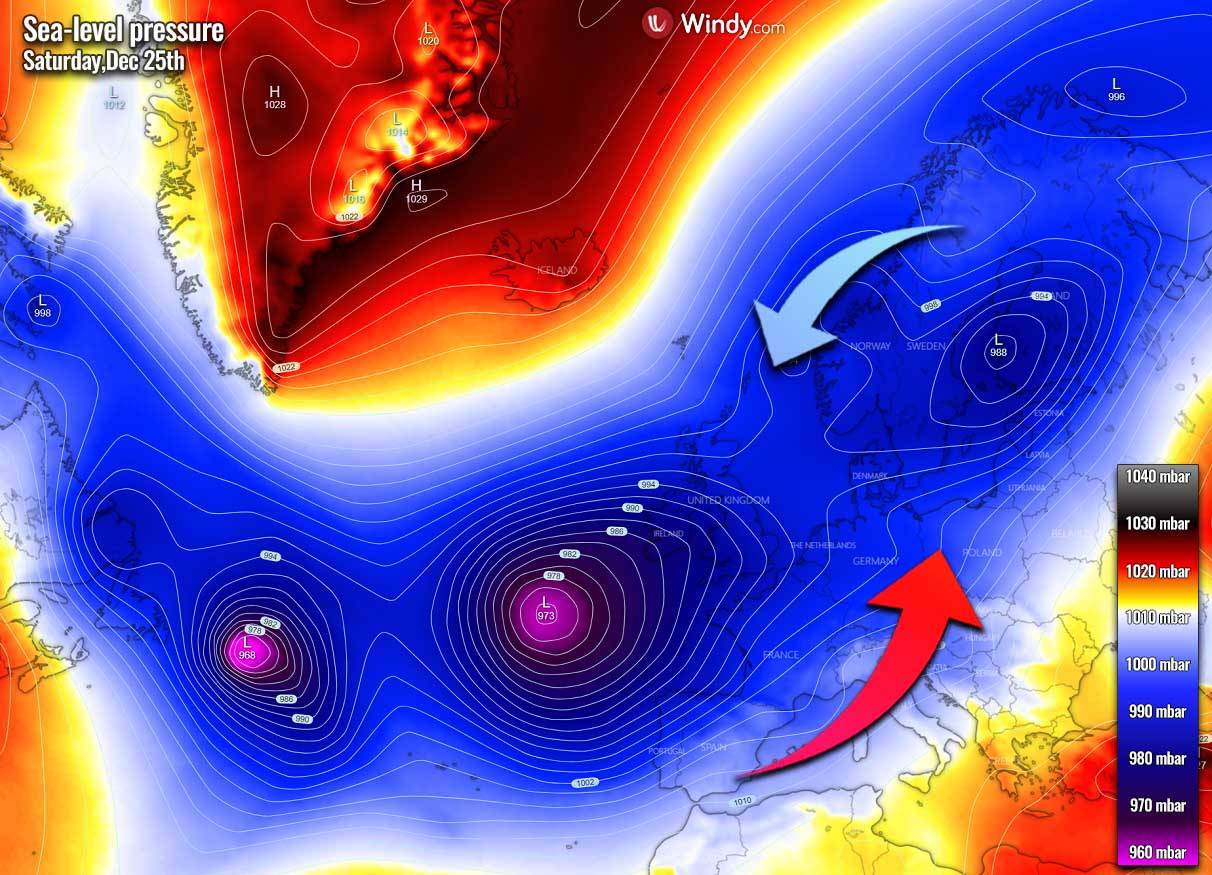 While at least the northern half of Europe gets into colder weather again, the southern half of completely dominated by the westerlies. Thus much warmer weather than normal that is unfortunatelly not featuring high odds for cold and snow around Christmas. but it becomes extremely cold over parts of Scandinavia at least.

Farther south, this can tell us the days from Friday through Sunday or Monday will be pretty much above the average across central, southwestern, south, and east Europe. With locally even around 10 °C above normal. 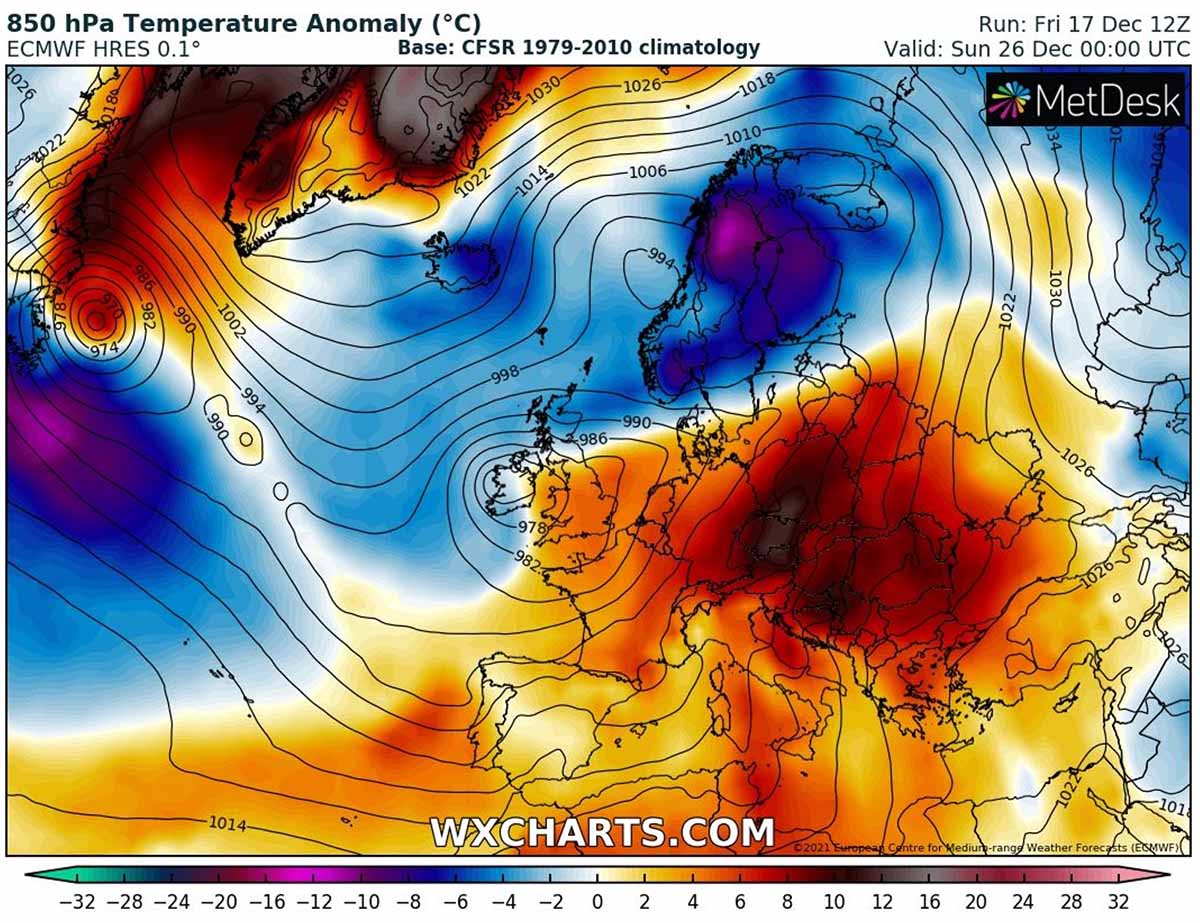 The westerly more moist flow will also bring quite some rain to the south of the boundary separating the cold to the north from the warmth to the south. Extending roughly from England to northern Germany towards the Baltic region over the next weekend.

Snow will be possible to the north in some areas too. And indeed over the Alps, but the lowlands are literally out of any chances this year.

HOW OFTEN DO WE GET SNOW AND A WHITE CHRISTMAS?

Let’s first talk about the odds for white Christmas across Europe per statistics. We can always check the historic probabilities for a white Christmas day. This is defined as having measurable snow on the ground on December 25th.

Having a white Christmas across Europe is actually a quite rare event. If you are a younger reader, you’d say ‘Christmas has been without snow for years now’. Indeed, it has, unfortunately, become more or less an exception over the last decade or two. 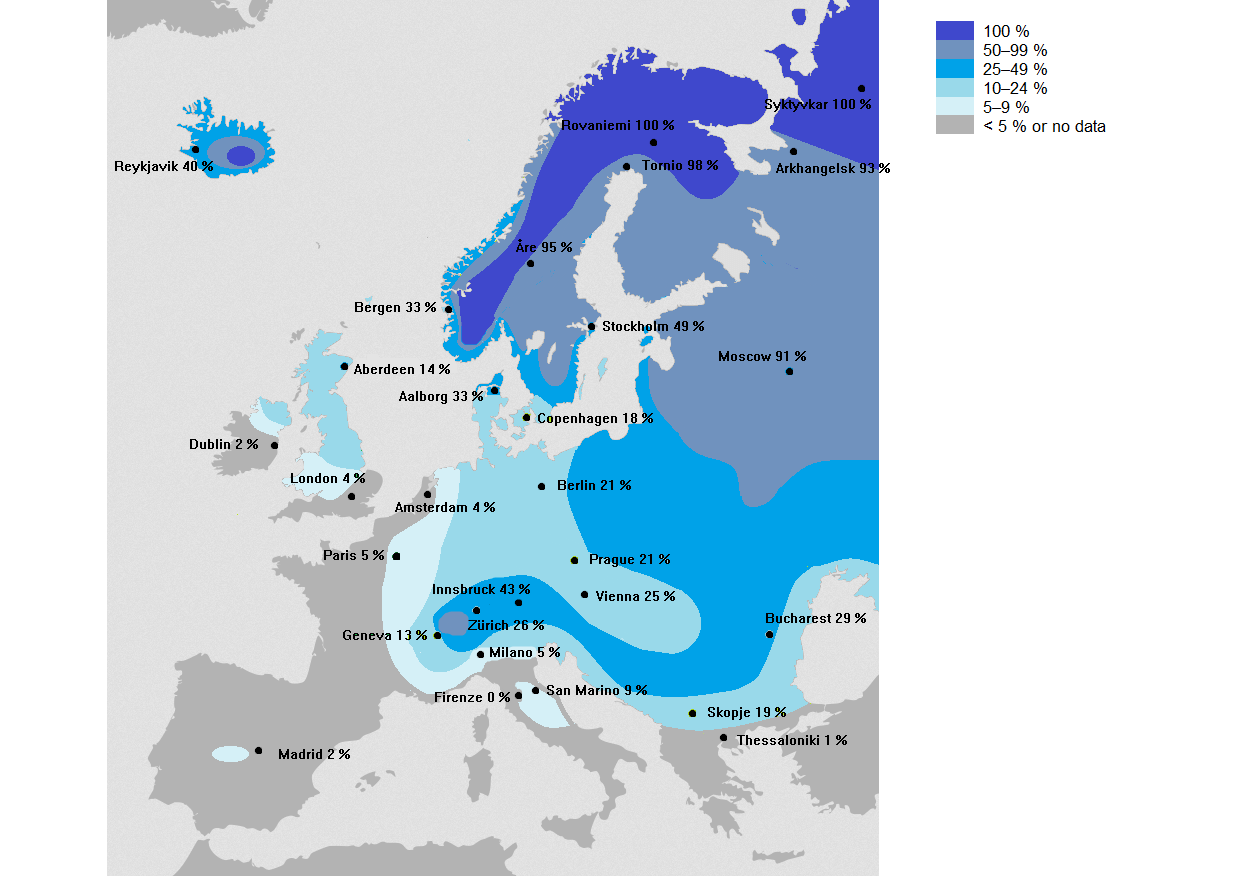 The map above was created by Reddit user Haayoaie. Historically speaking and based on the statistic probabilities, most of Europe actually has a very low chance to see snow on Christmas day, no matter we are at the end of the first winter month or a warming climate in the recent decades.

Actually, only around 5-10 % of Europeans live in an area where Christmas has snow on the ground. And those areas are typically over Scandinavia or more precisely, over the Lapland (that area is covering northern Norway, Sweden, and Finland). Think of those white Christmas cards, they are always pictured as snowy.

In other parts of Europe like England, France, Germany, the Balkan peninsula, the chances for white Christmas are statistically very poor. For example in the UK, the last widespread white Christmas was in 2010.

The white Christmas Day of 2010 in the UK was actually was an extremely unusual event, as not only the snow on the ground was reported at 83 percent of the official weather stations network. A mix of snow or sleet also fell at 19 % of those stations. The event for Christmas 2010 was the highest amount of stations ever recorded snow on a single day in the UK.

In contrast, London only had 4 white Christmas days during the entire 20th century which hints at how poor are the odds nowadays. Those years were 1927, 1938, 1970, and 1981, so only about a 4 % chance for snowfall on Christmas day if we play with the numbers.

One interesting thing to note from the map, have a look over central Spain (Madrid area) and Dublin (Ireland). Dublin is located quite far north of Madrid (Spain), but the chances for snow covering the ground on a Christmas day are minimal, only 2 % for both areas. Central Spain is situated at higher elevations while Ireland is often influenced by warm Atlantic westerlies.

SO WHERE ARE THE HIGHER ODDS FOR A WHITE CHRISTMAS 2021?

Now, let’s take at some preliminary trends over the weather forecast for the potential of a white Christmas day in parts of Europe this year. 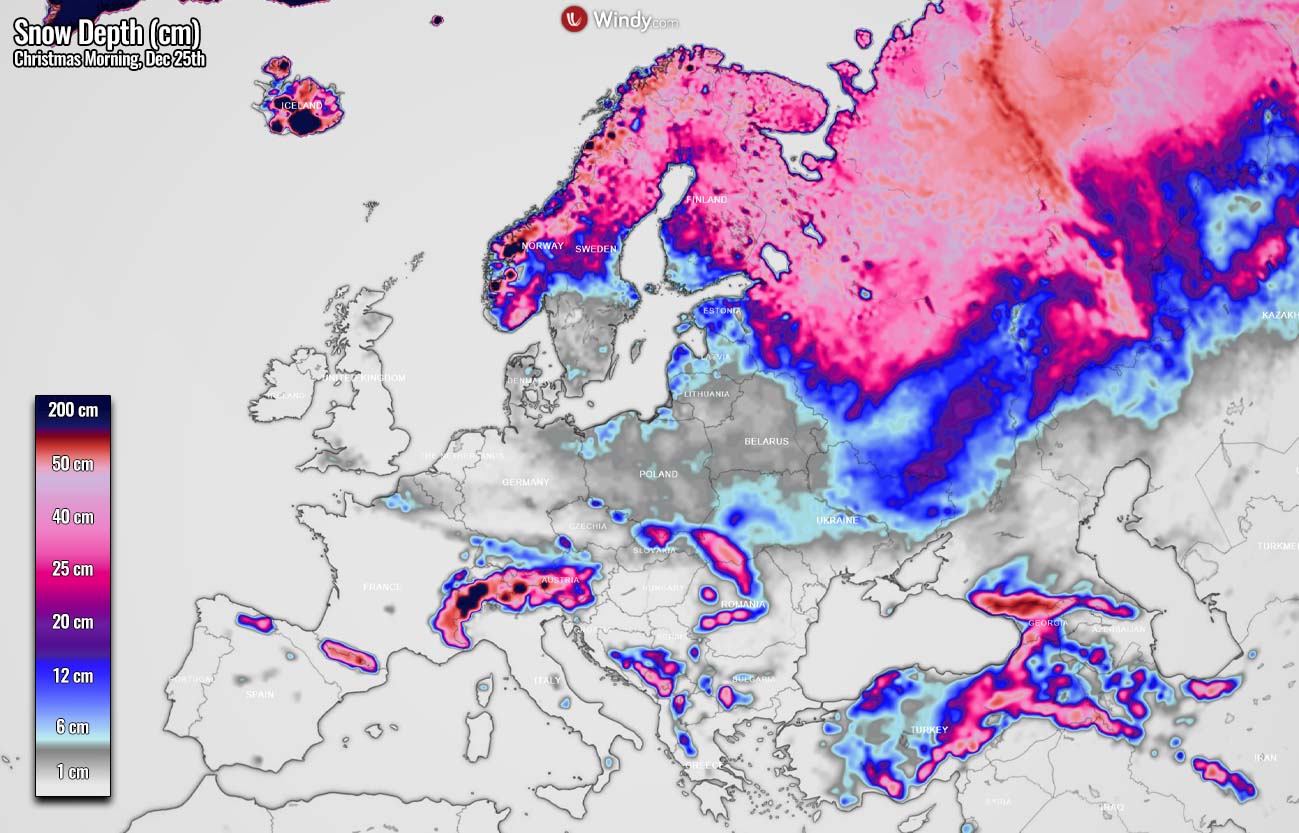 Looking at the actual early snow depth forecast for next Saturday, Dec 25th, we can notice a quite similar picture as in the historical probability we have seen above. Northern Europe and the higher altitudes in central and southeastern Europe (e.g. Alps, Carpathians, Turkey) will experience snow on the ground for Christmas.

Most lowlands in central Europe and western Europe look like to have a very low to non-existent probability of having snow on the ground for Christmas due to warmer weather that is forecast after the cold outbreak this week. We can see how much snow remains over the Alps, partly also over the western Balkans. Snow should still be on the ground across northern Romania, Ukraine, and indeed higher Turkey.

Western Europe is out of any significant chances for white Christmas Day as well. The front separating the cold from the warmth lies east-west from England to northern Germany and Poland (or possibly even farther north) on Friday and Saturday. And northeast Germany and Poland might actually see some snow on Christmas along the moving cold front.

Much more snow indeed remains over Scandinavia, especially across the higher Norway but also northern Sweden and Finland, also experiencing a pretty cold Christmas holiday and the occasional snowfall. 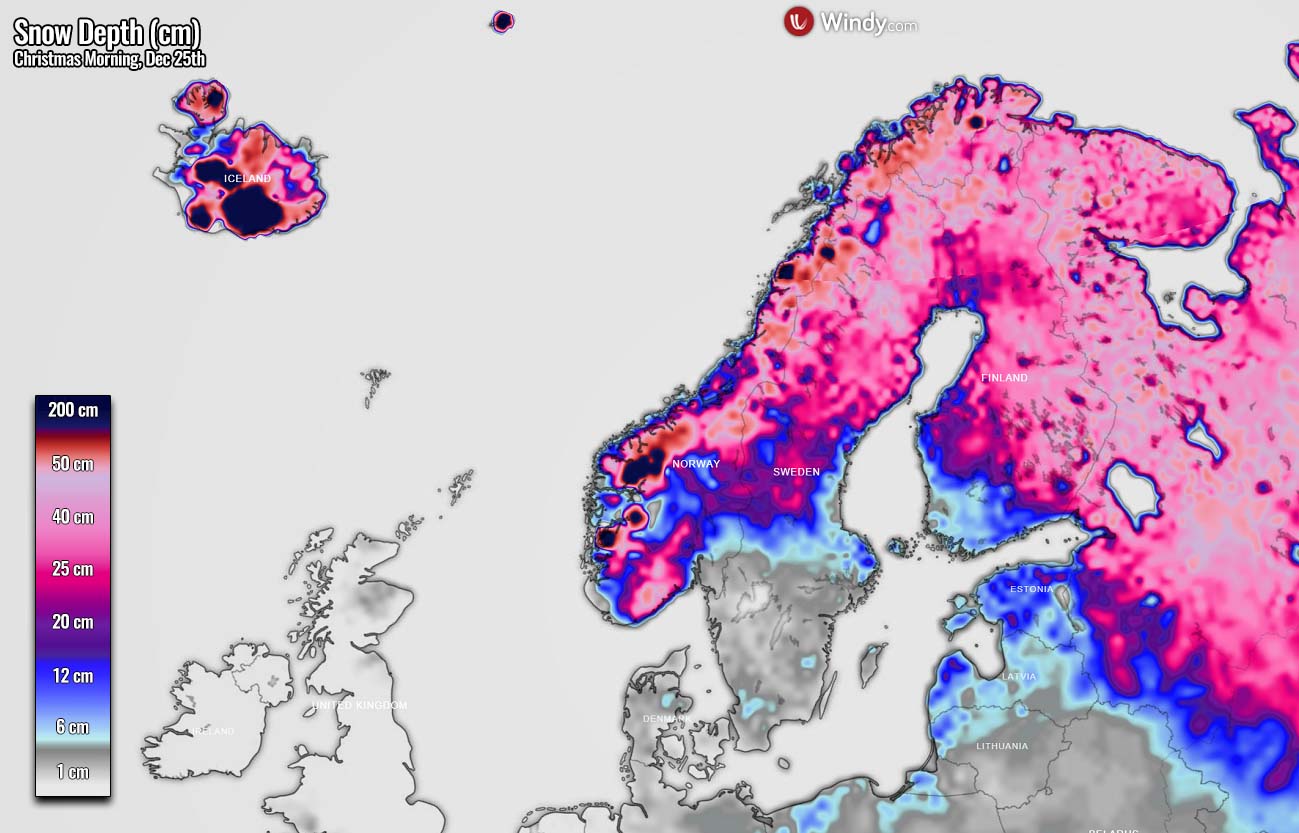 Regardless of the mixed trends for this year, we keep tracking the evolution of the weather pattern for Europe further. So stay tuned for the final updates on the weather forecast and snow outlook for Christmas Day 2021 in Europe soon.

A remarkable pressure pattern now unfolds over the Northern Hemisphere, affecting the winter weather in North America and Europe into the next year

** Images in this article were provided by Windy, and Wxharts.