As we have discussed in our long-range outlook a week ago, a period of much colder weather is coming into North American continent soon. The pattern is supported by the Pacific/North American (PNA) index with negative values – meaning favorable pattern for Arctic outbreaks into the United States. Quite some snow is also expected across the Great Lakes region and the northeast US, including significant lake-effect snow on Friday.

Short: The rest of February will be cold across the United States. But let’s get into some more details and featured frontal systems below. 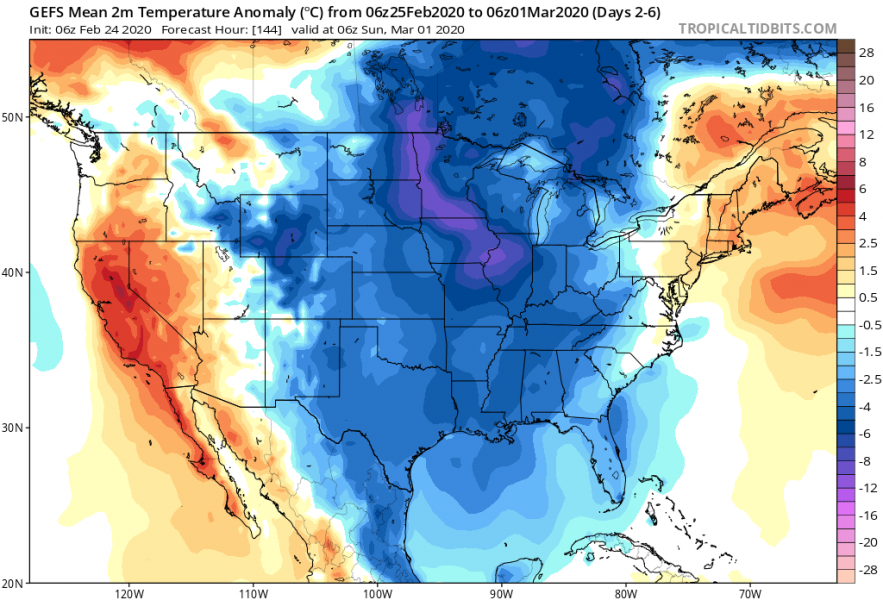 The developing pattern across the North American continent is quite typical for winter, building ridge across the west-northwest and deep trough moving south to its east. Releasing a strong northerly meridional flow from Arctic Canada far south across the United States, deep south towards the Gulf of Mexico and the East Coast. 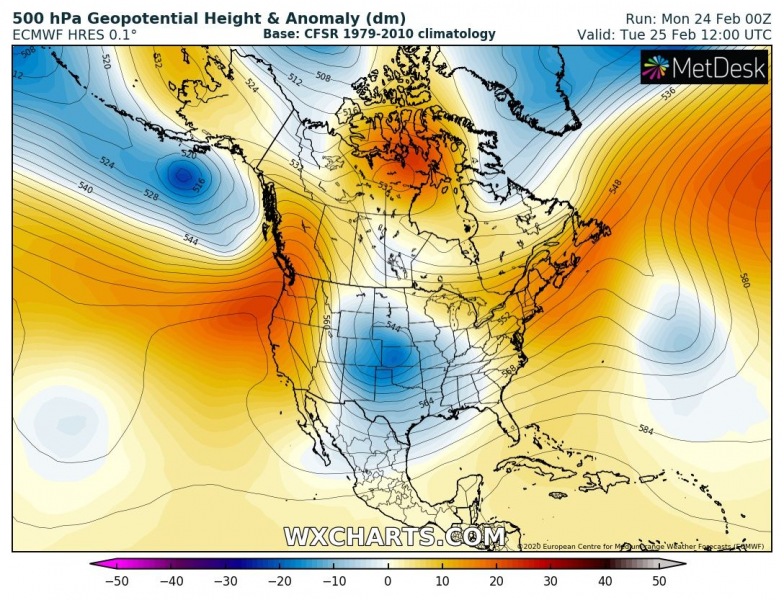 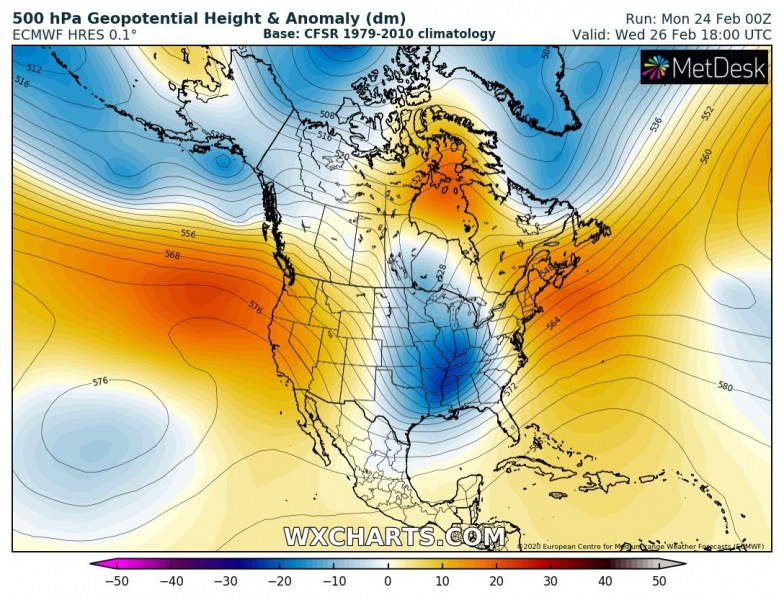 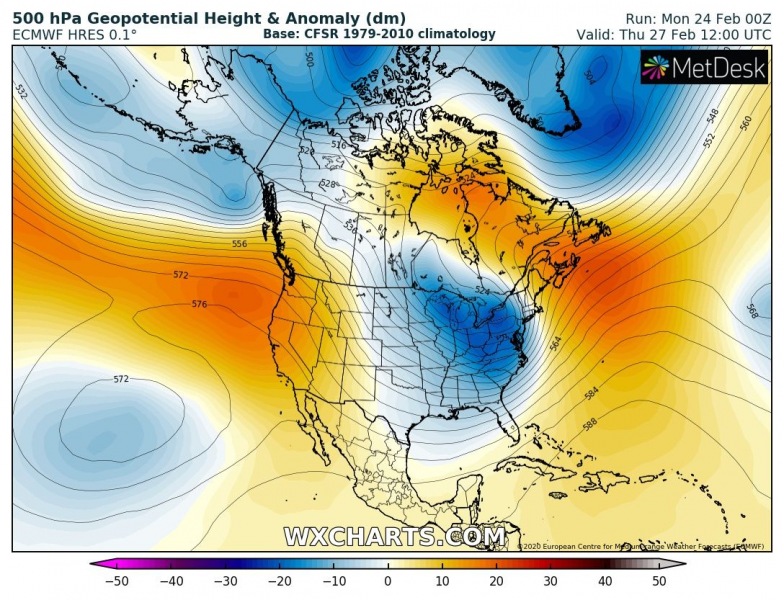 The Arctic outbreak event starts on Tuesday with a significant cold blast from Canada into the northern US and the Rockies. Much colder temperatures will be advecting south across the Great Plains through Wednesday, then gradually spreading east on Thursday. Before the outbreak reaches the East Coast, the eastern half of the United States will be experiencing springlike weather conditions through mid-week. But then a strong cold front with more wintery weather and much colder air mass replaces the warmth later this week and into the weekend. The weekend will be very cold across the eastern half of the CONUS. Frosty mornings are also expected across the whole southeast US, with the exception of coastal cities and Florida. 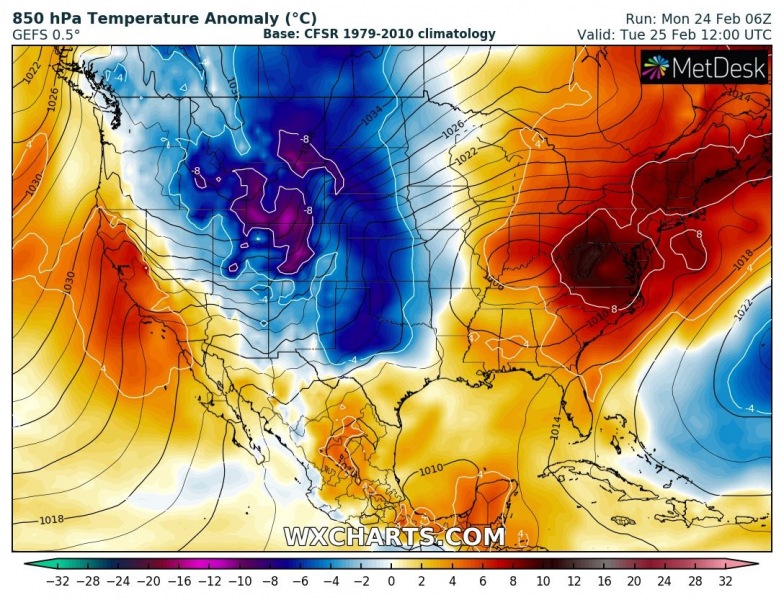 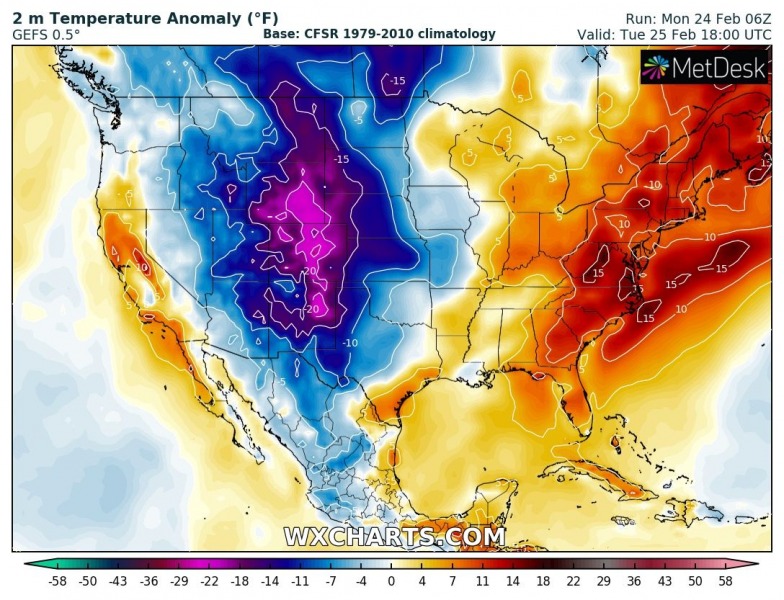 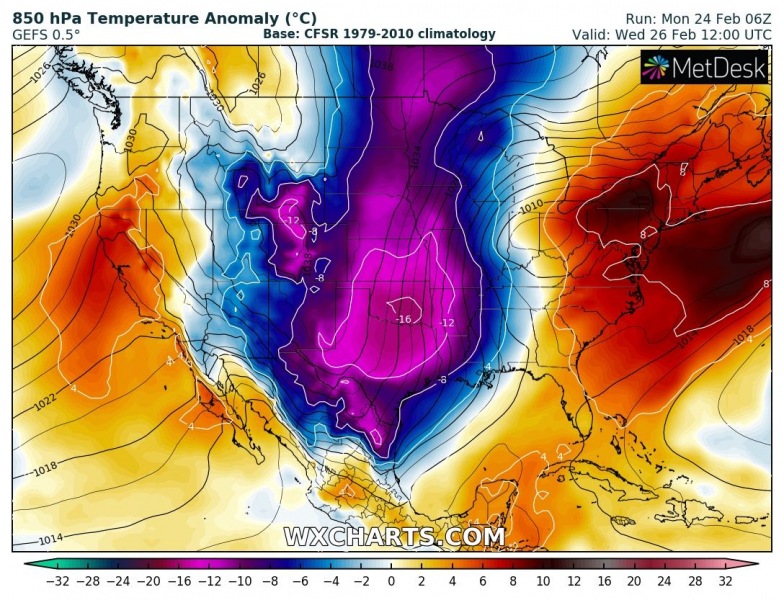 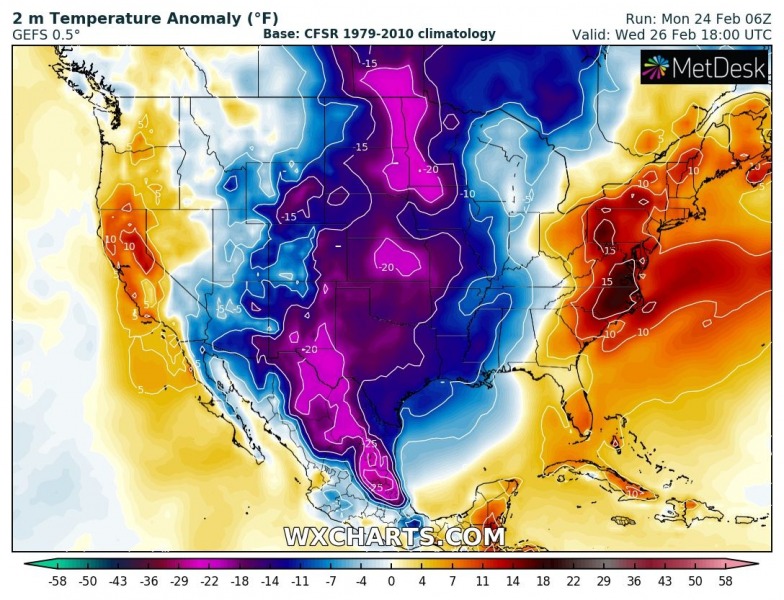 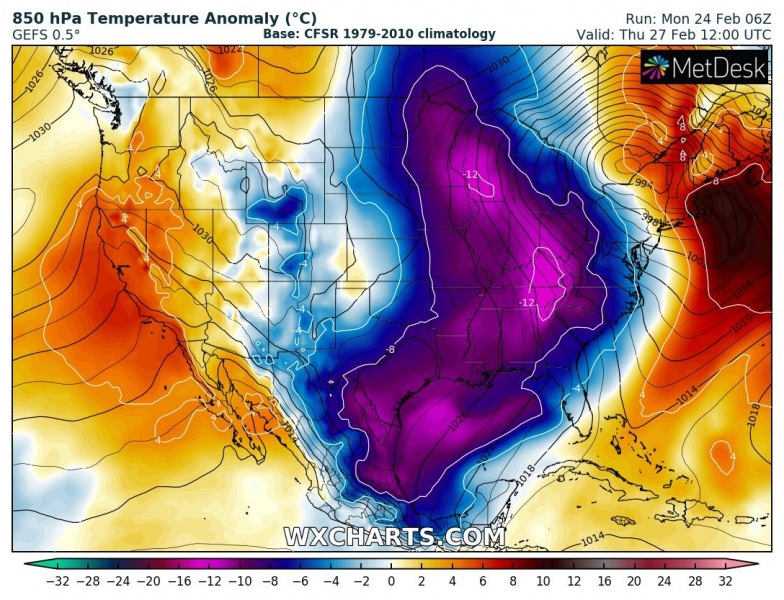 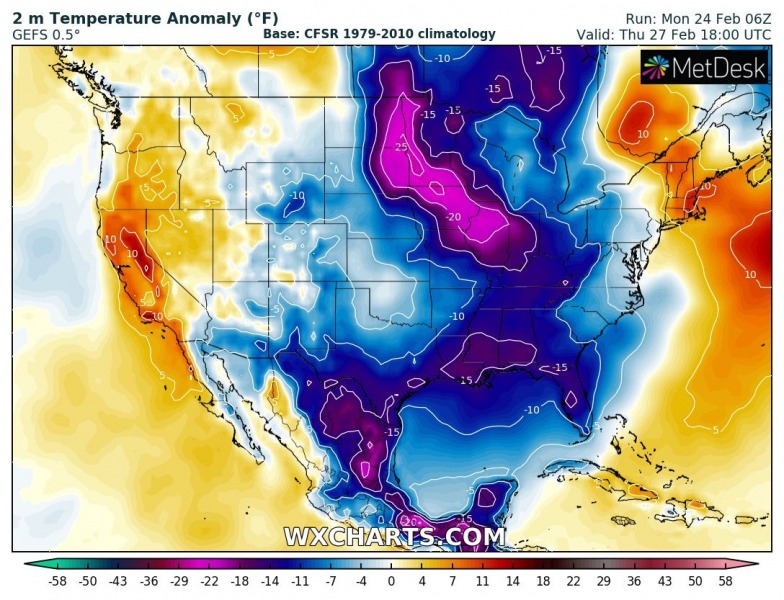 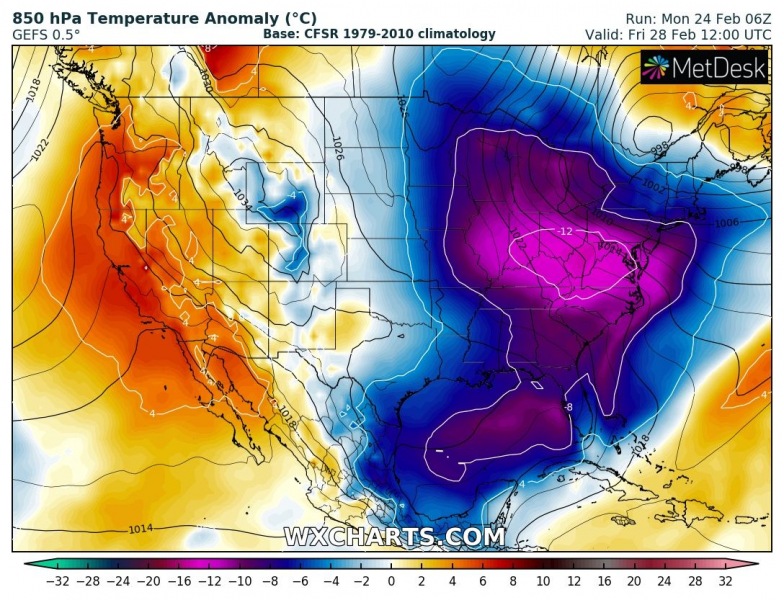 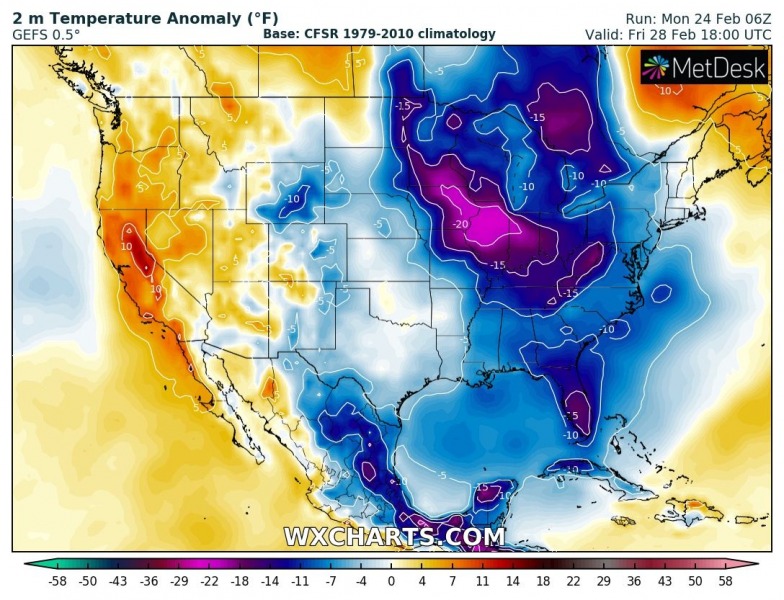 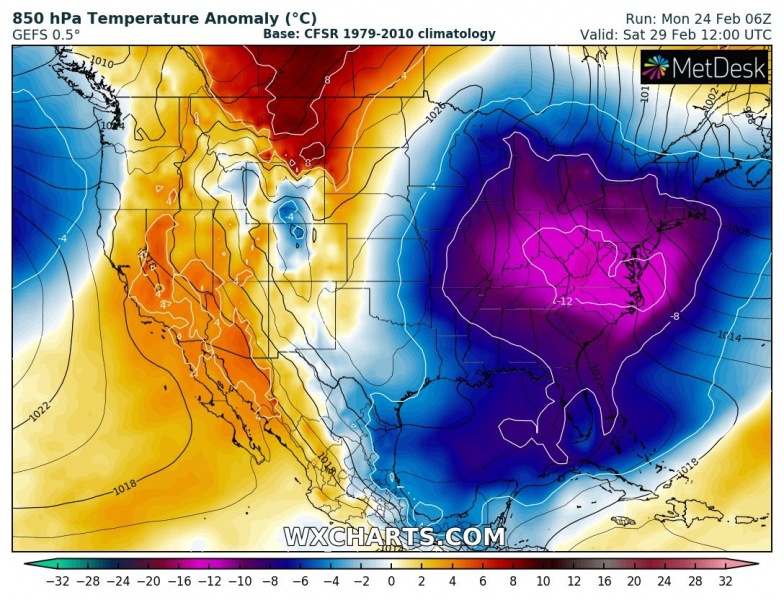 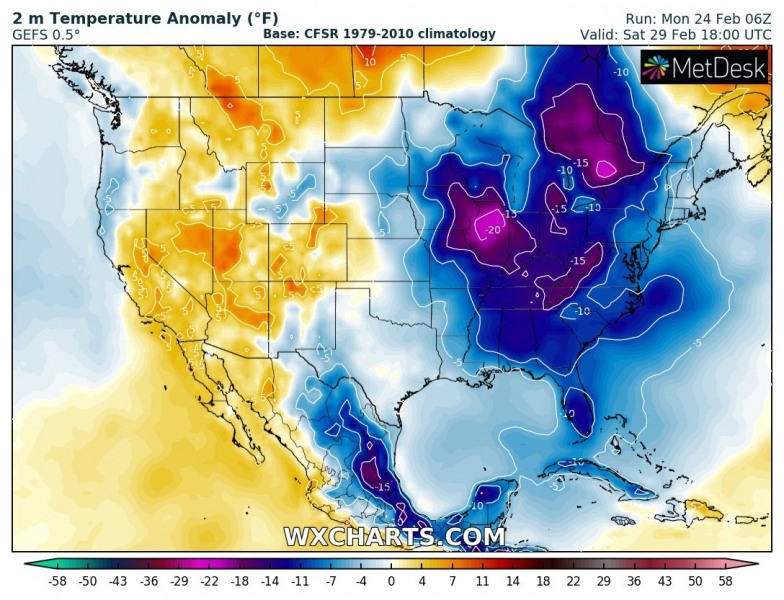 One feature of interest for the more significant winter weather will be a low-pressure system moving across the Ohio Valley through Wednesday and Thursday, it will deliver quite a good amount of snow across the southern Great Lakes and Ohio Valley regions. 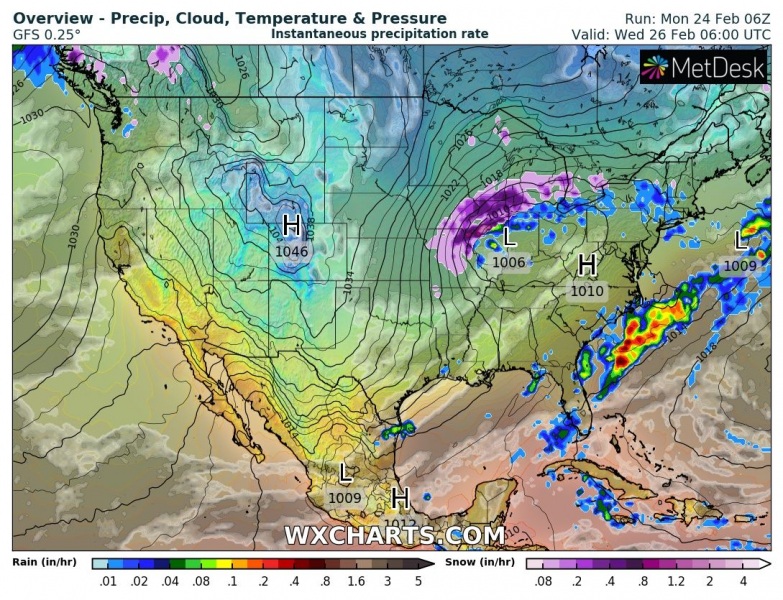 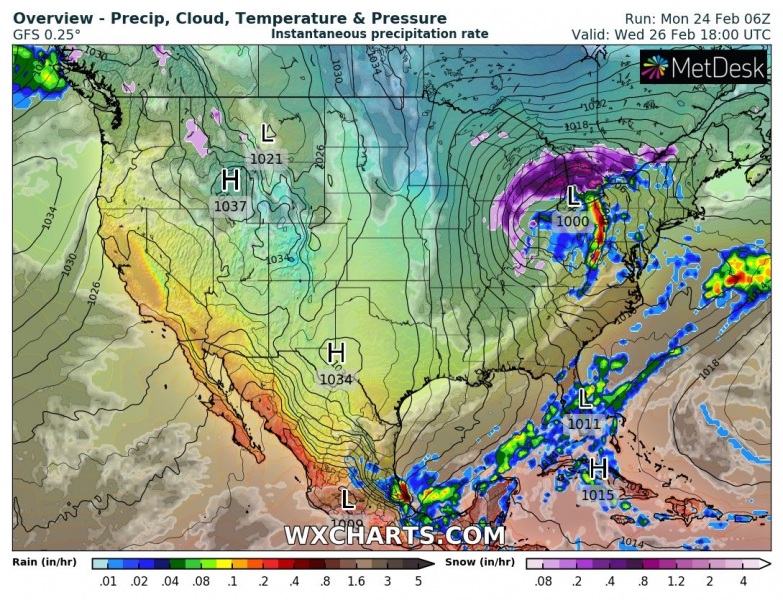 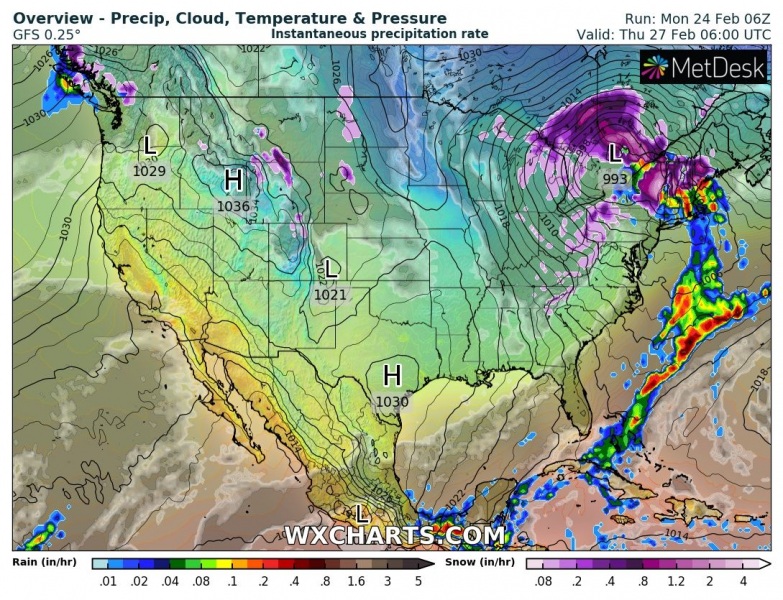 With the additional push of the very cold air mass across the Great lakes behind the Thursday’s snowstorm, the lake-effect snow is expected to pick up over the region on Friday. With textbook conditions for a significant amount of lake-effect snow until Saturday, as favorable west-northwest winds will be present over the Great Lakes. Huge amounts of snow are likely along the eastern shores of the lakes Michigan, Huron, Erie, and Ontario. Models are in good agreement 20-30 inches of snow will locally be quite possible! 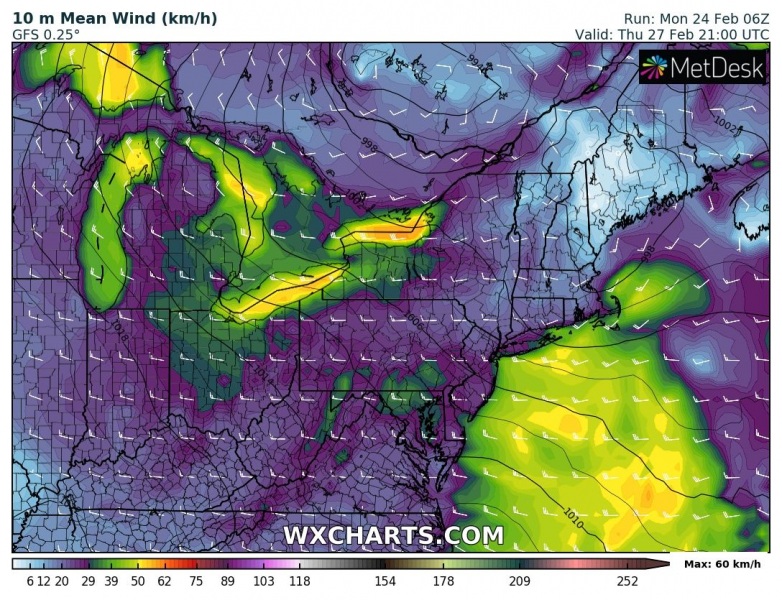 Here is the total snowfall across the United States until the weekend, most of the snow is focused for the northeast US where winter storms will be the most robust. 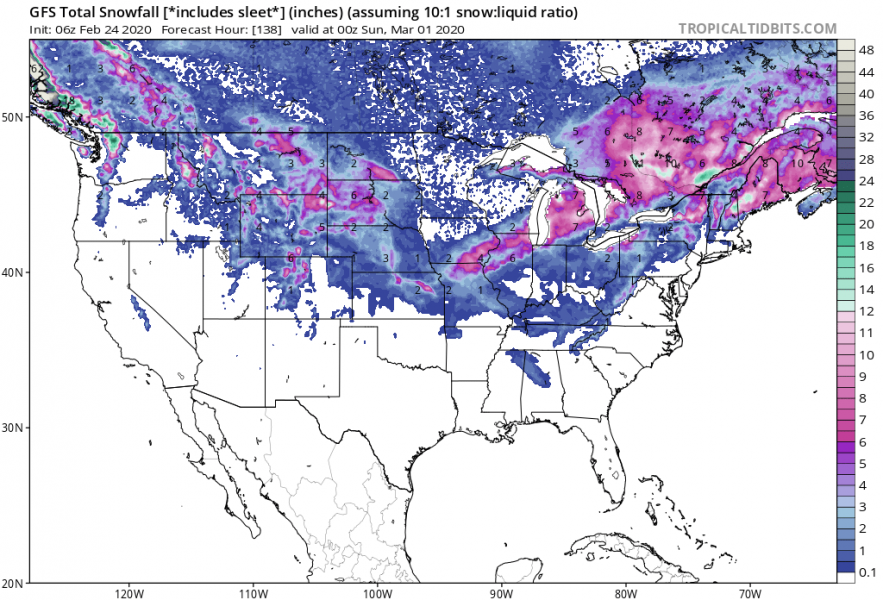 Recap: Although the 2019/20 winter is relatively mild in both continents, occasional Arctic cold outbreaks are spread across the United States. The end of February will be very cold, also snowy across the Great Lakes and the northeast US.

Meanwhile in Europe – at least some days of colder weather and some snow is seen this week: