Arctic sea ice has reached its seasonal peak at fairly high levels. The maximum sea ice extent was the highest in the past 7 years. The official statement from NSIDC: “On March 5, 2020, Arctic sea ice likely reached its maximum extent for the year, at 15.05 million square kilometers (5.81 million square miles), the eleventh lowest in the 42-year satellite record. This year’s maximum extent is 590,000 square kilometers (228,000 square miles) below the 1981 to 2010 average. Prior to 2020, the four lowest maximum extents occurred from 2015 to 2018.” 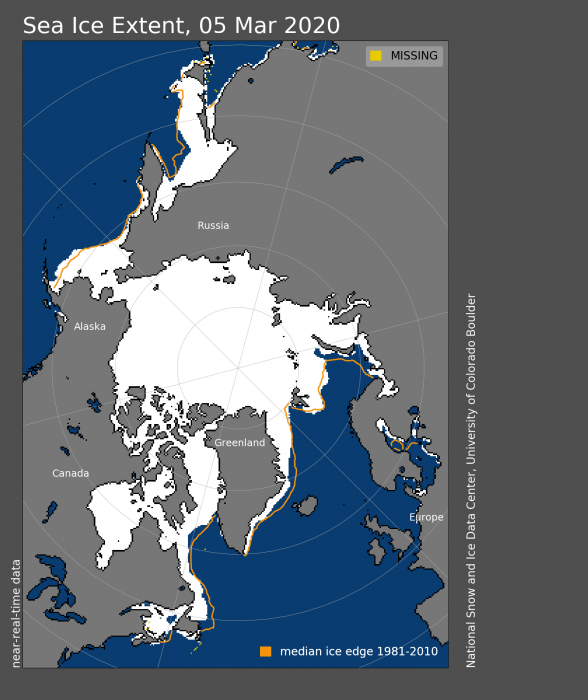 The image from NSIDC shows the 2020 data, compared to 2012, which was the year with the lowest Arctic sea ice extent on record in September that year. We can also see the comparison to the decadal average 2001-2010 and 2011-2019. This year we were running well above the average for the last 9 years, and close to the average for the previous decade. Of note is the big difference between the decades and ice loss in the past 10 years. We can also see that in the past few days, very rapid ice melt has begun. 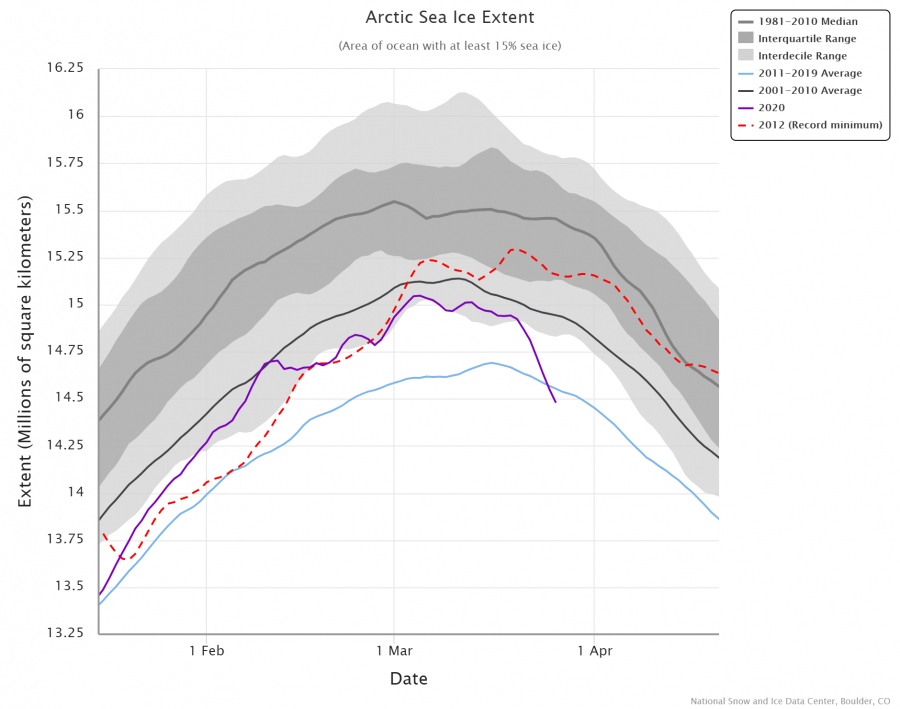 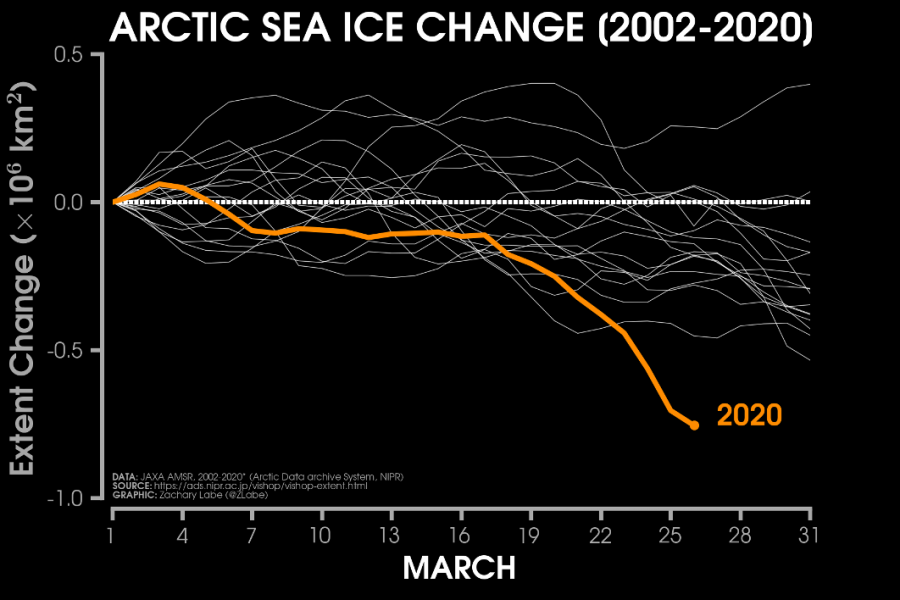 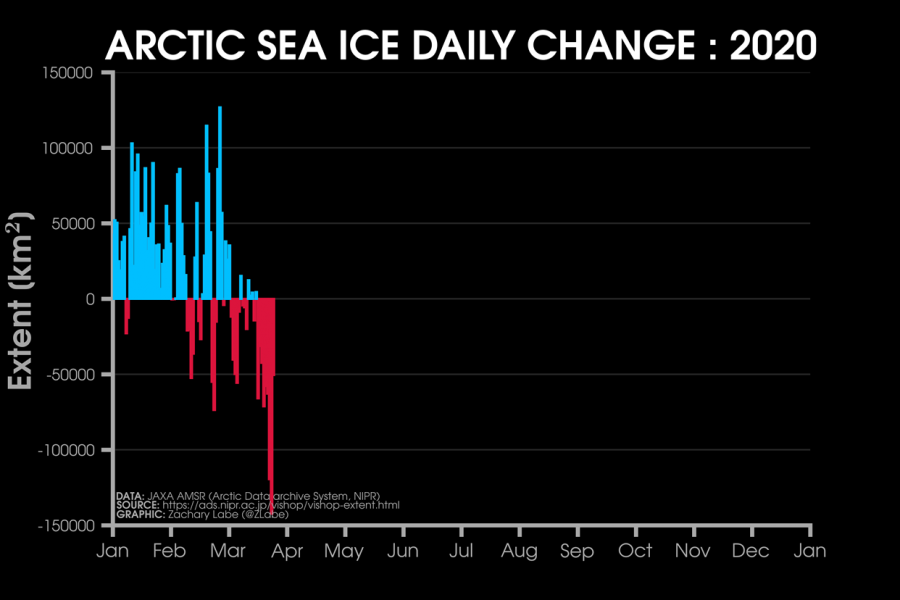 Temperature analysis shows that an Arctic Warming Event was ongoing in the days when the fast ice loss began. Surface temperatures over the Bering Sea, the Chukchi Sea, and Beaufort sea were over 20°C above the long term average. Warmer temperatures were also present over the Labrador Sea and over the Sea of Okhotsk. As we head into Spring, the seasonal warming brings higher temperatures to the most southern sea ice regions first, where the ice melt usually starts first. 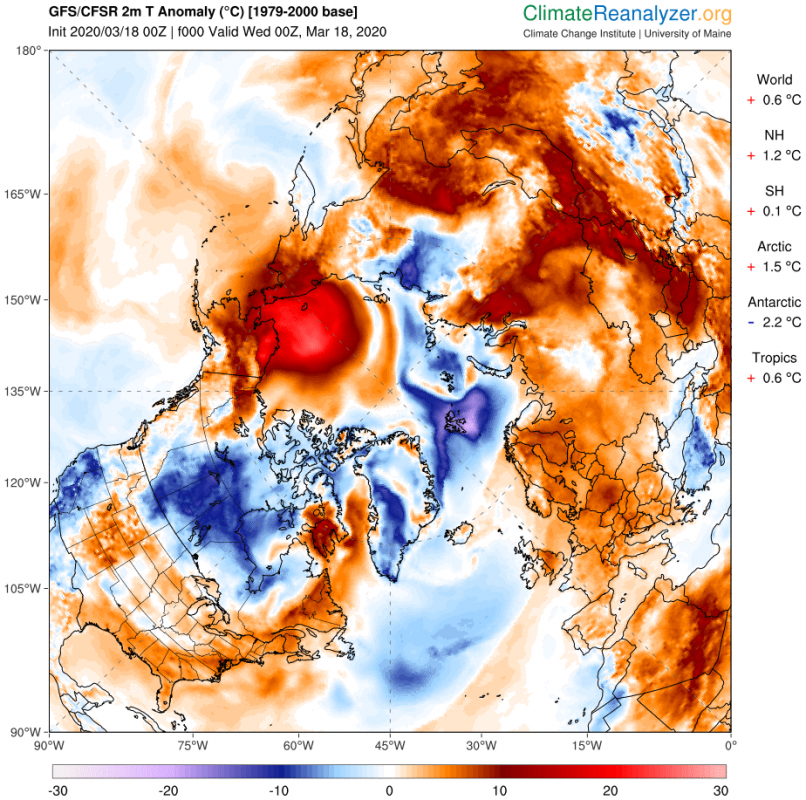 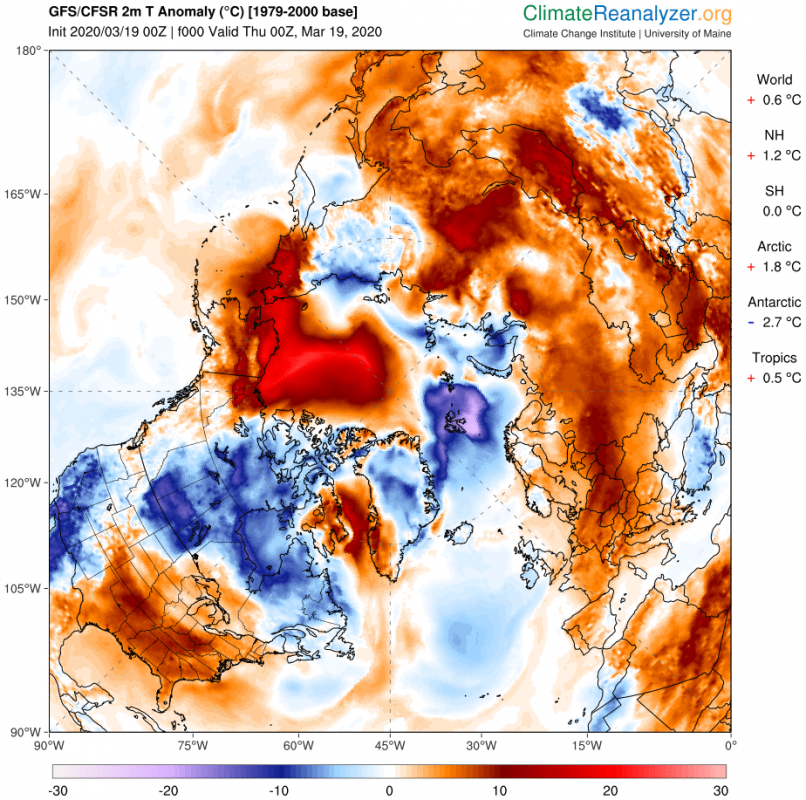 We can see this development on the sea ice thickness and concentration change. We made custom maps, which show the 10-day change from March 16th-26th. The first graphic shows sea ice concentration change and the second graphic shows sea ice thickness change over 10 days. It is obvious that the outer ice edges have experienced increased melting. Specifically, in the areas that we have mentioned before, that were under warmer than normal temperatures. What stands out the most, is the Scandi-Atlantic sector (Labrador sea, Gulf of St. Lawrence and the Barents Sea) and the Pacific sector ( Sea of Okhotsk and the Bering Sea). These areas are connected with the oceans, which start to warm up as we head into spring. We can also see changes on the ice cap in the Arctic Ocean, where these changes do not necessarily mean melting. It can just indicate a redistribution of the sea ice or changes due to frozen precipitation over the ice cap.

The official data from the NSIDC shows the current sea ice extent, and the 1981-2020 long term mean outlines. We can see quite a large lack of sea ice on the Pacific side, compared to the long term average. More melting is also to be expected on the Atlantic side in the coming days. The graph shows the sea ice extent, where we can see the downward trend in the past days. 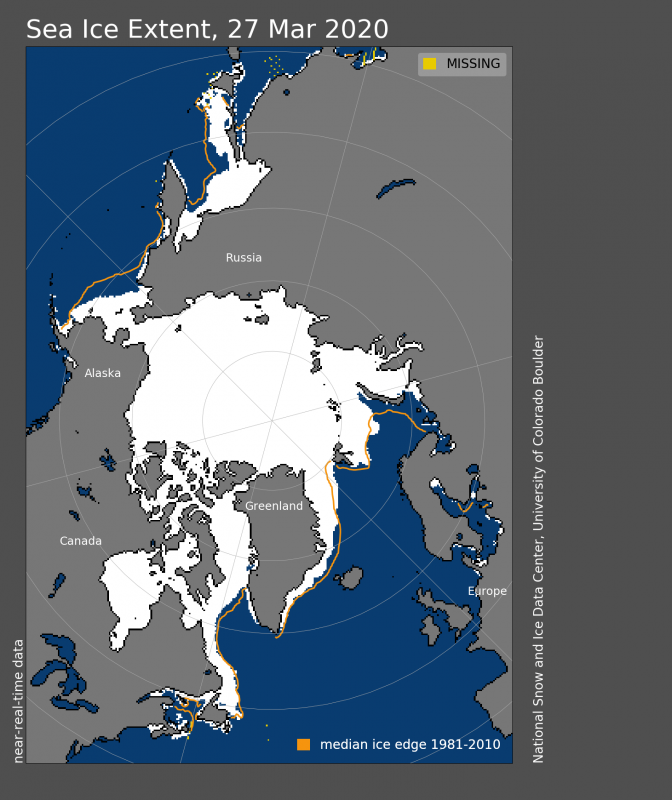 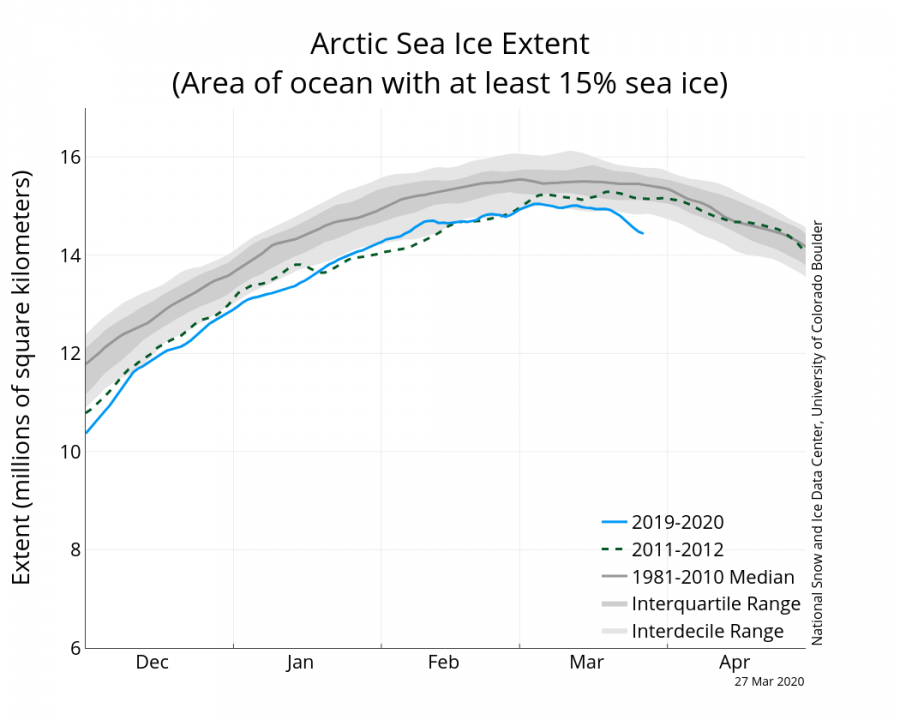 Arctic sea ice is in constant motion and has a lot of internal dynamics, due to the weather patterns and ocean currents. You can see it nicely on our animation, which shows the beginning of the sea ice growth season back in September 2019.

What about the Southern Hemisphere? Over Antarctica, the sea ice growth season is in full swing, with current levels around the long term average. The sea ice minimum was not as low as the previous year, generally keeping the Antarctic ice extent in a fairly healthy condition, despite some increased melt in the past few years. 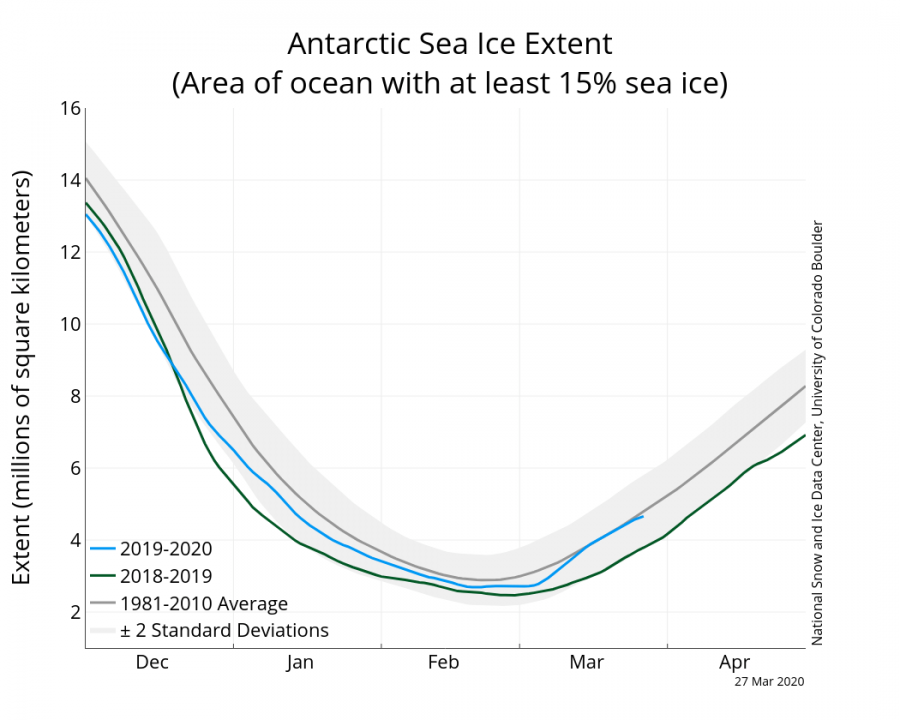 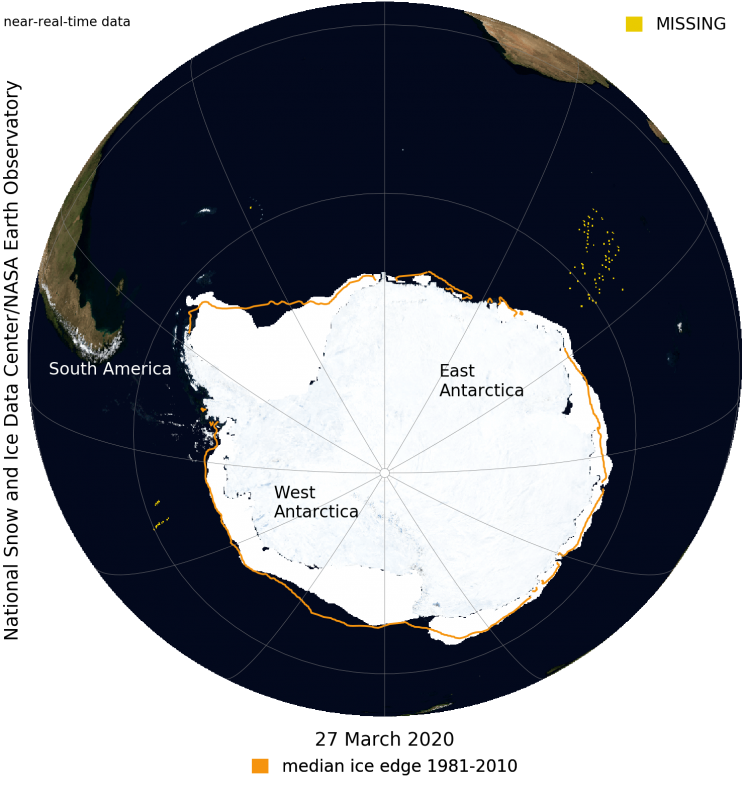