An outbreak of severe thunderstorms is again forecast to develop across eastern France, northern Switzerland into Germany ahead of an approaching deep upper low centered over the Bay of Biscay and western France on Monday.

A great overlap of moderate shear and high instability should support large to very large hail and severe damaging winds, as well as local flash floods. Scattered storms will merge towards the evening hours while gradually spreading into Germany.

Therefore, an MDT (moderate) risk has been issued to highlight the areas where the most robust severe thunderstorms are likely to develop on Monday.

Above: Video animation of the convective storm’s development across Europe from the Monday morning into the early Tuesday morning, June 28th to 29th, 2021. 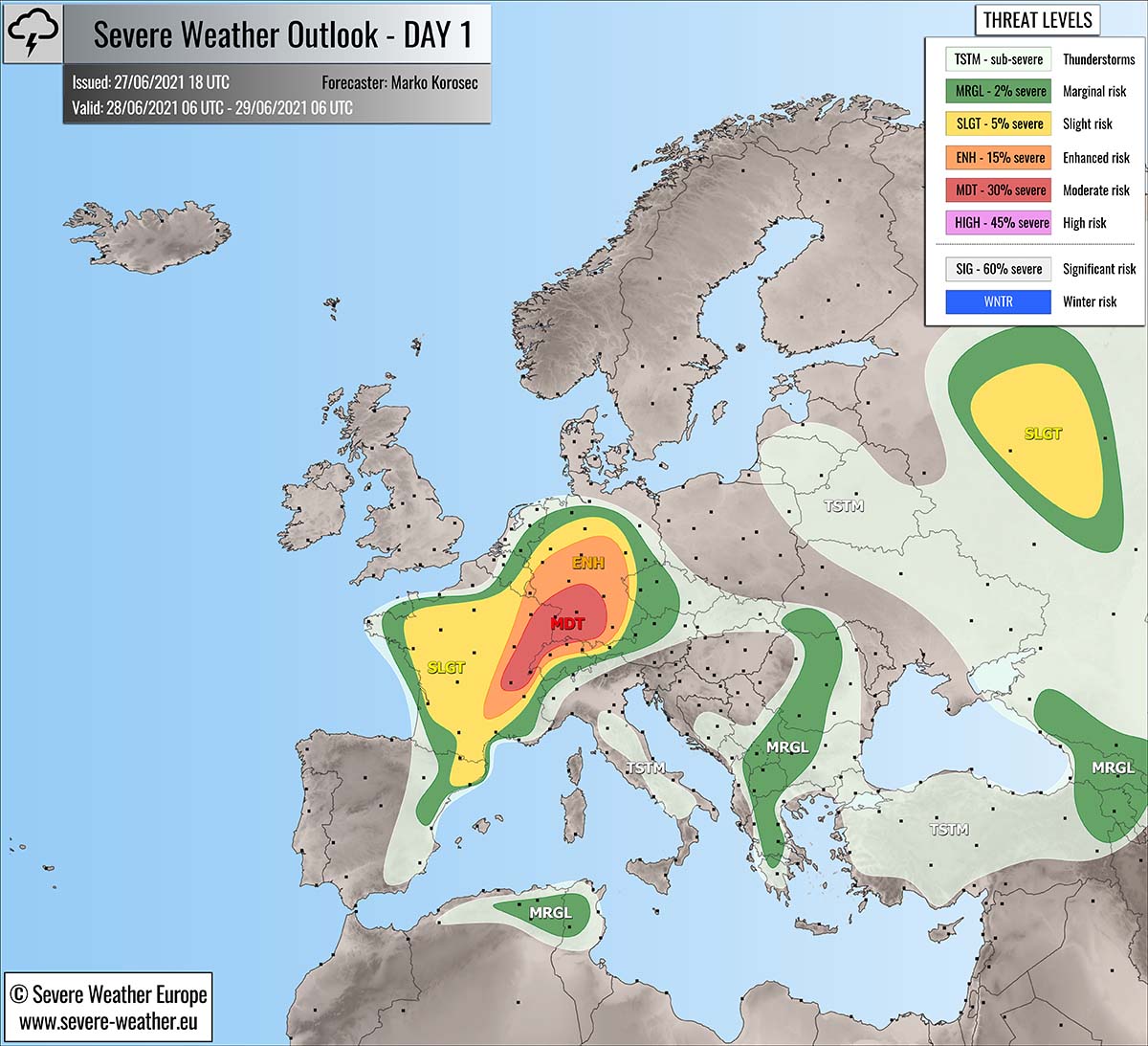 There are two large-scale features over the European continent that are in focus for convective weather on Monday. The first is a small but intense deep upper-level low, centered over the Bay of Biscay, gradually drifting east into western France.

The second area of interest is the shallow and large upper low placed over eastern Europe and western Russia. While in between these two systems, a strengthening upper-level blocking ridge in developing over the Balkan peninsula and central Europe.

At the surface, an eastward advancing cold front is moving over France and eastern Iberia, associated with the upper low. Another surface frontal system is ongoing over western Russia, under the upper low as well.

With the eastward progress of the surface front across the MDT and ENH risk areas in France and Germany, severe thunderstorm activity is forecast to significantly increase in the afternoon and evening hours. 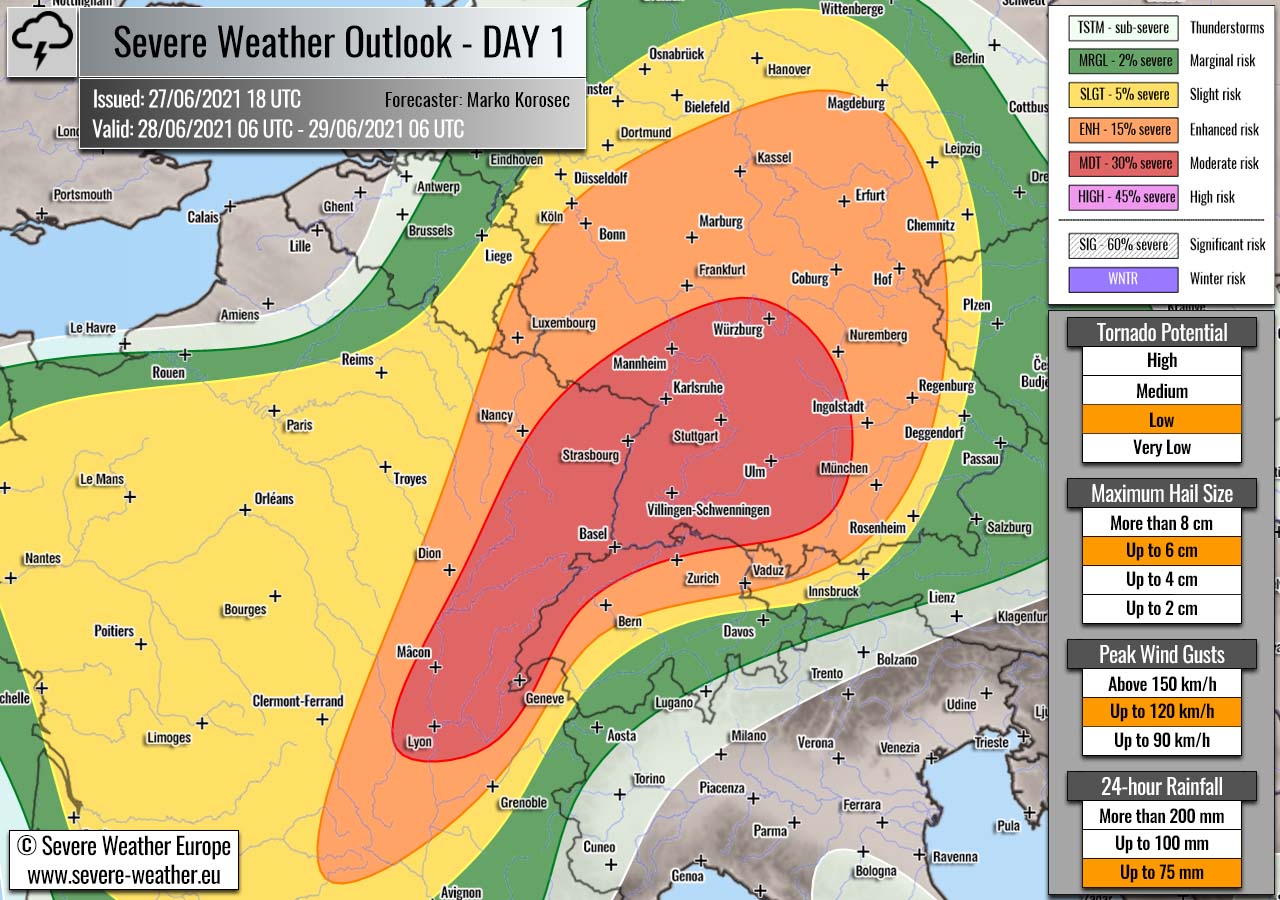 MDT risk has been issued for eastern France, western and northern Switzerland into southwest and central Germany with a threat for large to very hail, severe damaging winds, torrential rainfall with flash floods, and low tornado threats.

ENH/SLGT risks have been issued for areas surrounding the MDT risk area across most of France, southern Benelux, a large part of Germany, extreme western Czech Republic, and parts of western Austria with a threat for severe winds, large hail, torrential rainfall, and low tornado threats.

With the deep upper low moving east into western France through Monday, convective activity is expected to take place ahead and along the moving surface cold front. Thunderstorms ahead of the front will initiate along the complex terrain of southern and eastern France, gradually expand in coverage and intensity while spreading east.

Once the better upper-level forcing arrives over the ENH and MDT risk areas in eastern France and southwestern Germany, a rather rapid development of storms is likely due to quite strong instability while the deep-layer shear is also increasing during the peak heating afternoon hours.

Around 1500 J/kg of MLCAPE, coupled with 40-50 knots of effective wind shear should be enough to support discrete supercells, capable of producing very large hail and severe winds. Coverage until the evening hours should not be too widespread, so storms will remain rather isolated to scattered.

Some enhanced storm-relative helicity could also support some low-level mesocyclones and a brief tornado potential, most likely across eastern France towards central Germany as long as storms remain more isolated.

Thunderstorms will gradually merge into a large cluster, possibly an MCS towards the evening hours while the activity will spread further east-northeast across the MDT/ENH risk areas in central Germany. Severe damaging winds and large hail with torrential rainfall and flash floods will be the primary threats.

Activity will gradually losing its strength through the nighttime hours as instability vanishes further east and north over Germany. 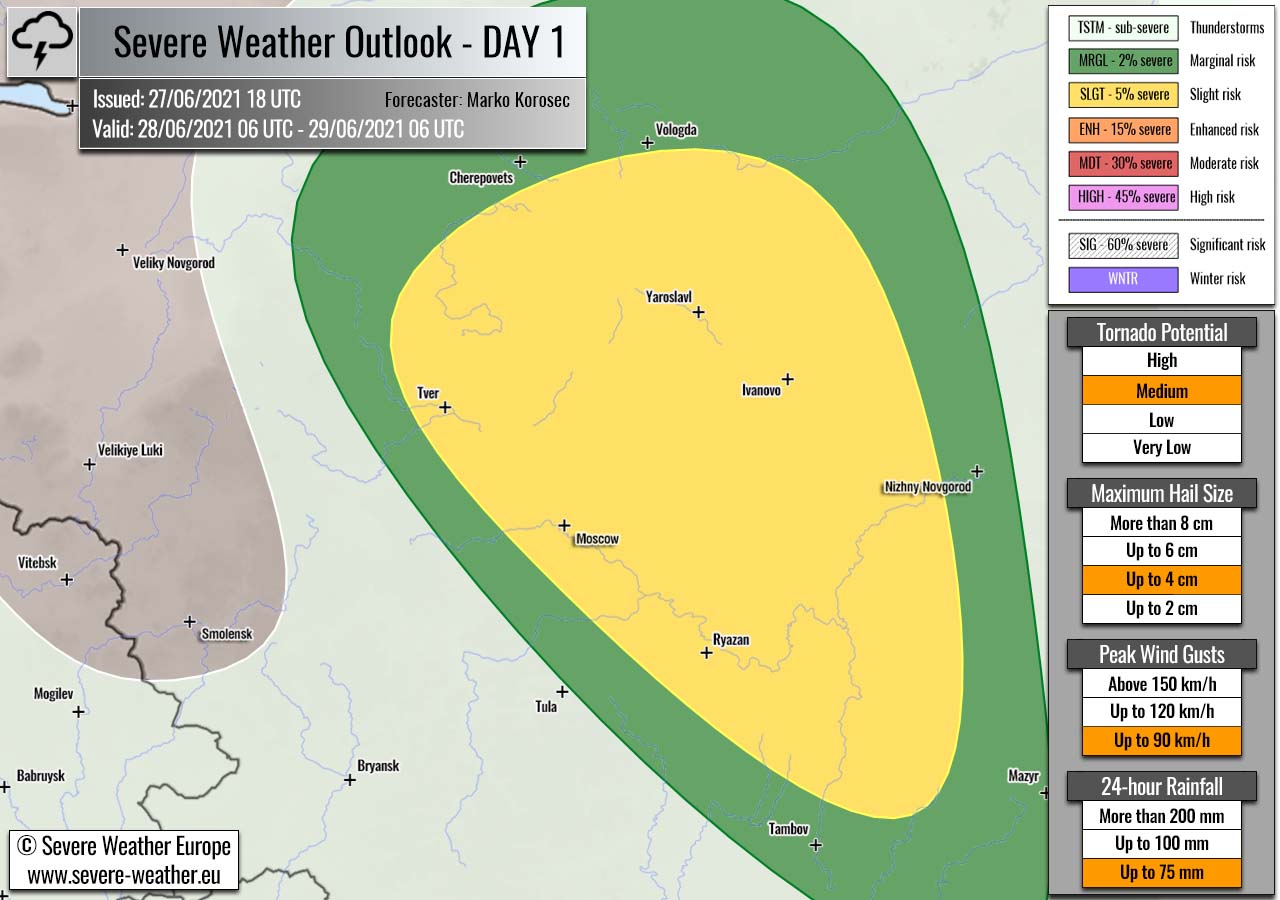 A SLGT risk has been issued for parts of western Russia, including the capital Moscow with a threat for large hail, severe winds, and tornado threats.

Under the shallow upper low, weakly capped, and strongly heating environment should allow rather widespread convective activity to take place from the early afternoon hours onwards. The frontal system should provide the main focus for storm initiation along both the cold and warm front, as well as local topography features.

A combination of moderate shear and strong instability should support isolated supercells as well, those will be capable of producing very heavy rainfall, large to very hail up to 4 cm, and damaging winds. While the enhanced low-level shear/helicity should also bring a higher potential for tornado threat.

A rather slow moving storms should locally bring a lot of rain and enhanced flash floods threat. Activity will be gradually moving northeast across the SLGT risk area with time and diminish after sunset as instability vanishes.

Diurnal heating should support some convective activity between the strengthening upper-level ridge over the western Balkan peninsula and shallow upper low over eastern Europe. While low shear is present, marginal to moderate instability should build-up and promote slow-moving pulse thunderstorms.

A slow moving nature of storm cells should be most supportive of marginally large hail and heavy rain with flash floods potential. Storms will gradually diminish towards the evening hours as instability quickly vanishes.

+++ Weather forecast for Algeria, and Tunisia +++ 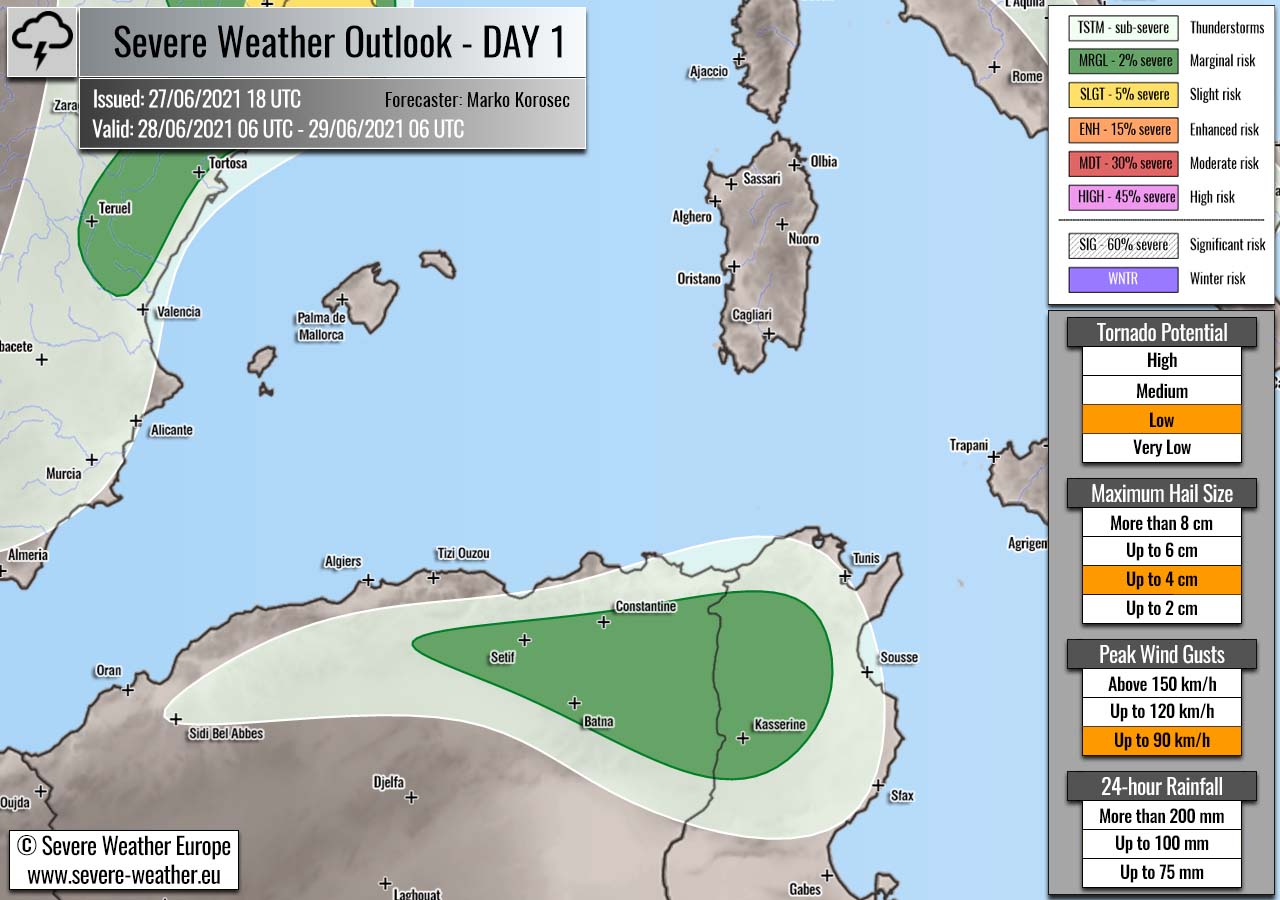 MRGL risk has been issued for far northeast Algeria into parts of northern Tunisia with an isolated threat for severe storms, capable of producing large hail, and severe winds and low tornado threat.

Although the threat is conditional, if storms develop, an overlap of strong shear and instability should allow organized severe weather, including a supercell or two that could bring large hail up to 4 cm and severe winds. Even some low tornado threat as convergence seems strong to support good low-level shear.

MRGL risk has been issued for extreme northeast Turkey, Georgia and Armenia with isolated threat for severe storms that could produce marginal hail and torrential rainfall with flash floods.

SLGT/MRGL risk have been issued for northeast Spain with an isolated threat for severe storms, capable of producing severe winds, marginally large hail, and torrential rainfall.

TSTM risks have been issued for the Appenines in central Italy, Turkey, Belarus and Lithuania, Slovakia and Czech Republic, eastern Ukraine into western Russia with a threat for daytime-driven thunderstorms.

Limited shear is present in these areas, so the storms should remain sub-severe.