A dramatic hole in the ground dominates the landscape of Yakutia, North-East Siberia, and keep growing at an accelerated rate. The Batagaika Crater is the largest permafrost crater in the world. But what is going on there? Scientists are working hard there trying to decipher the secrets of climate. Massive permafrost thaws thousands of years ago destabilized the climate system, something that could happen again very soon. 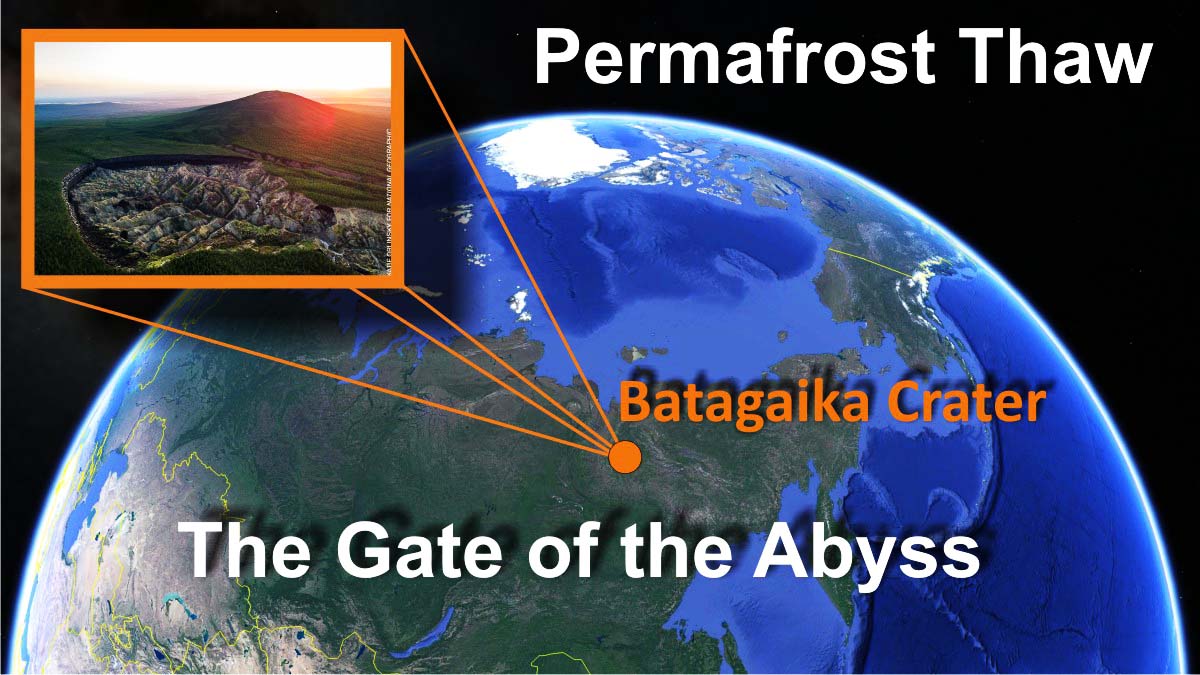 In Northeast Siberia, there is a dramatic hole in the ground, the Batagaika crater. This huge crater is the largest of its kind: almost 1 kilometer (0.6 miles) long and 86 meters (282 feet) deep. Located roughly 10 kilometers Southeast of the town of Batagay (Yakutia), on the left bank of the Batagay River, the Batagaika crater has a characteristic shape resembling a tadpole.

The Batagaika Crater doesn’t dominate the landscape, IT IS THE LANDSCAPE. The walls of this huge crater are completely made of ice and mud. Outside the Batagaika crater, you can hear Cracks of ice in the distance while it melts off. 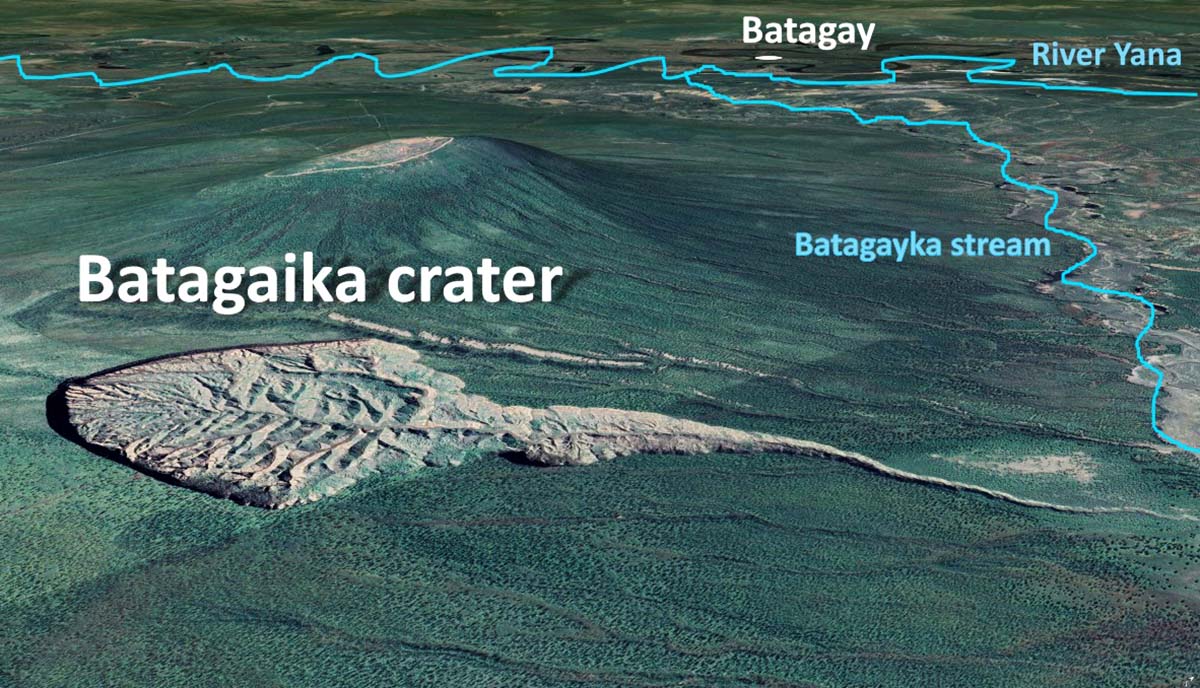 Rendering from Google Earth edited by SWE to show the location of the Batagaika Crater.

The enormous crater started off as just a small gully in the 1960s. Locals in the area avoid it, saying it is a “doorway to the underworld”. But for scientists, the site is of great interest. Remote sensing observations show that the boundary of the slump moves 20-30 m per year. These ice-reach sediments of perennially frozen ground are exposed to ongoing thawing.

In other words, ice turns into water that evaporates or melts and flows away and the residual sediments, that are no longer kept together by ice, subside. This results in a chaotic landscape surface due to the variable ice content of the sediments. The Batagaika crater is the biggest permafrost crater in the world: but what is permafrost?

Another view of the Batagayka Crater; rendering from Microsoft Flight Simulator 2020 by Kevin Keys

WHAT EXACTLY IS PERMAFROST?

Permafrost, by definition, refers to the ground that remains below 0°C for at least two consecutive years. More briefly, we can define it as perennially cryotic ground. The term cryotic, better than frozen which implies the presence of ice, suggests a ground temperature below 0°C. In fact, ice is not necessary to characterize the Permafrost, which instead is exclusively defined by the thermal state of the ground.

Except under very special circumstances, permafrost does not extend to the ground surface due to solar radiation and above-freezing temperature thaw the uppermost layer of ground during summer. Exceptions exist under perennial snow-beds or cold-based glaciers. The uppermost layer, which freezes and thaws on a seasonal basis, is called the Active Layer.

To understand how the temperature in the ground behaves in areas interested by permafrost, we drew the sketch below. 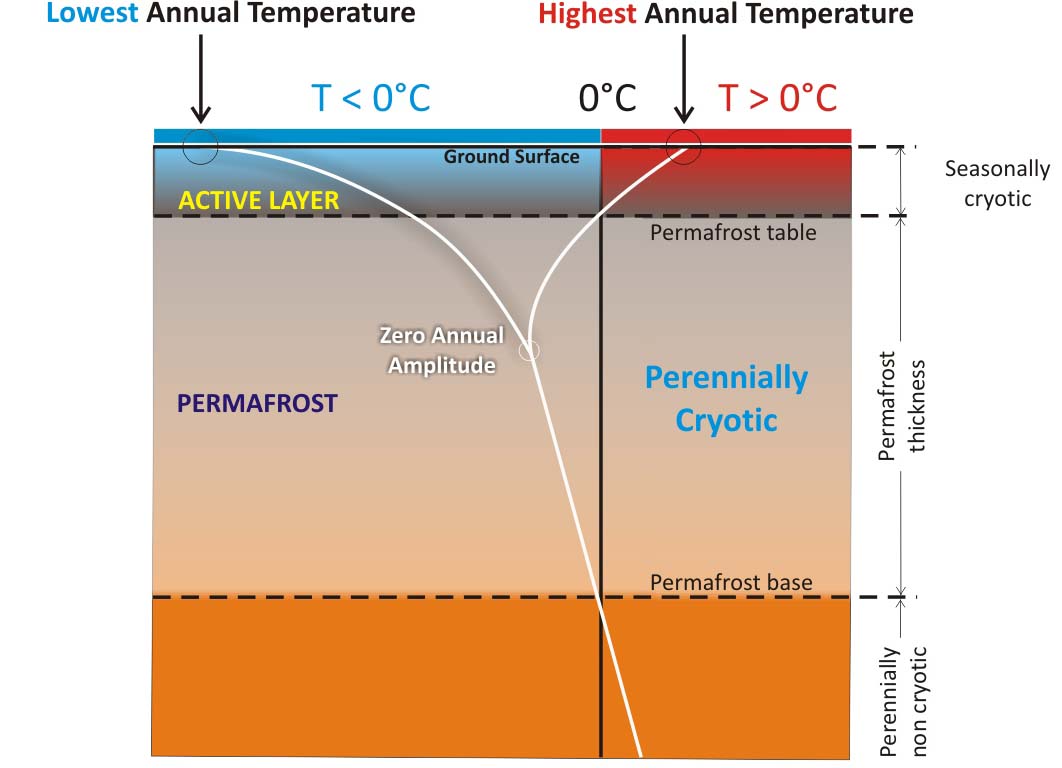 The “Y” diagram explains how the ground temperature behaves from the surface to depth. Annual extremes are of course the greatest close to the surface, becoming gradually smaller moving down. At a certain depth, the temperature is constant all year round; this is the ‘Zero Annual Temperature’ depth. From this depth, the temperature starts rising constantly following the geothermal gradient at the rate of 25-30°C per kilometer (72-87 °F per mile).

HOW PERMAFROST IS REACTING TO GLOBAL WARMING?

Permafrost is a key component of the cryosphere and occupies around a quarter of the Earth’s land area in the Northern Hemisphere. The change in surface energy balance triggering permafrost degradation may be caused by regional changes in climate such as longer or warmer summer or increased winter snowfalls which insulate the ground from the atmosphere. Another cause could be deforestation both human-induced or natural, like a forest fire.

If the ground warms for one of these reasons, how does the permafrost react? To understand what happens when such a circumstance occurs, we created the GIF animation below. If ground warms up, the surface temperature extremes will rise. The same will happen proceeding in depth. As a consequence, the ‘Y’-diagram will move on the right while permafrost is warming. As you can easily see in the animated GIF, the Active layer will deepen and the permafrost becomes thinner.

There is indeed a lot of concern related to Permafrost degradation, mainly because massive positive feedbacks related to CO2 and Methane release in the atmosphere might eventually speed up Global Warming. As the global surface temperature has continued to rise over the recent decades, the risk of permafrost degradation has also increased.

The degradation of the permafrost may affect the climate system via many factors such as local ecological balance, hydrological processes, energy exchange, and the carbon cycle, as well as the engineering infrastructure in cold regions and even extreme weather events.

In the video above, we reproduced the possible Permafrost scenarios under different global warming paths, thanks to the huge graphics available here

CLIMATE IN THE BATAGAIKA CRATER AREA

Significant amounts of permafrost deposits exist in Yakutia. Also in Batagay, just a short drive away from Batagaika Crater, life is still determined by the ice permafrost underfoot. Temperatures easily drop to -50°C (-58°F) during winter and getting to the town of Batagay on land is only possible for four months a year when several rivers around the town freeze and can be driven on.

Another view of the Batagayka Crater; rendering from Microsoft Flight Simulator 2020 by Kevin Keys

WHAT HAPPENED AT THE BATAGAIKA CRATER? IS THIS ALL HAPPENING DUE TO GLOBAL WARMING?

The enormous crater started off as just a small gully. The process began in the 1960s when the forest was cleared exposing the ground to solar radiation during summer. As trees that shaded the frozen soil were removed, the sun began warming the ground causing permafrost degradation.

The Batagaika crater area increased by almost three times during these 27 years. The fastest expansion took place between 2010 and 2014 with a 22.7% increment. The analysis of elevation of the crater revealed that in 2018 its maximum depth was ca 70 m and that depth was decreasing towards its north-east tail.

In the video below we collected several Landsat images of Batagaika Crater from 1991-2018. Images are discussed in a scientific paper of Vadakkedath and others in 2020, available here.

More technically the Batagaika Crater is a Retrogressive Thaw Slump, called also Megaslump. These structures are rapidly evolving slope features resulting from the degradation of ice-rich permafrost. Such processes are universally described under the term Thermokarst. As with many terms in the periglacial wordlist, this term derives from the apparent similarity between some permafrost-degradation landforms and karst landforms developed on limestone and carbonate rocks.

A retrogressive Thaw Slump has two main morphological components: a steep vertical or near-vertical icy head-scarp and a low-gradient slump floor typically sloping 2 – 15°. Retrogressive Thaw Slumps conceivably represent the most active of all Thermokarst landforms. Nevertheless, Thermokarst progress is a thermal rather than a solution phenomenon, independent of underlying lithology and includes completely diverse processes. That is just the definition of what is happening at Batagaika Crater.

Sketch of a retrogressive thaw sluamp. Progressive retreat of the headscarp results in extension of the slump floor. Redrawn after Ballantyne 2018

The satellite observations of the spatial distribution of vegetation inside the Batagaika crater allow comprehending the overgrowing process related to the crater expansion within the last thirty years. The animation we set below shows temporal changes of the spatial distribution of Normalized Difference in Vegetation Index (NDVI) values inside the Batagaika crater in the period from 1991 to 2018.

It is indeed evident how the spatial distribution of vegetation, as a result of natural growth, increased after 2010. The succession of vegetation inside the Batagaika Crater interior may delay the further process of permafrost thawing thanks to the summer shading exert by growing trees.

Looking at the lowest exposed layer at the base of this slump, scientists suggest the permafrost at the base of the Batagaika Crater is particularly old. Preliminary dating reveals how the permafrost here could be 650,000 years old. To learn the age of the outcropping permafrost researchers rely on luminescence dating, which reveals the last time minerals in the soil saw daylight. If it is so, would make it the oldest reported known permafrost in Eurasia.

As such, this giant gash in the ground offers opportunities to study much further back into the past. Each exposed layer of the Batagaika Crater wall is like a geological snapshot, helping scientists unraveling how permafrost and surface vegetation responded to past warm and cold climates. It gives a window into times when permafrost was stable and times when it was eroding.

The wall of the Batagaika crater holding remnants of last ice age and beyond. Photo by Katie Orlinsky

The permafrost in the Batagaika crater holds hints of ancient arctic vegetation and fauna. Scientists sampled hundreds of thousands of remnants of plants learning for instance how, during the last ice age, vegetation was unexpectedly lush. In that period both Winter and Summer temperatures leaped down lower than in modern times but apparently, Yakutia was a paradise for foraging mammals.

The foal found in the Batagaika Crater is astonishingly preserved. Photo: North-Eastern Federal University in Yakutia

Arctic regions of Russia are used to such discoveries, nevertheless finds like these have started happening more and more. One of the most astonishing creatures tumbled out in perfect conditions is a cave lion cub found at the Samyuelyajh River, not far from the Batagaika Crater. Found in 2018, now scientists know her age which goes back to 28,000 years ago.

This find is considered unique and no other such find exists in Yakutia. This lion cub, called Sparta, is probably the best-preserved ice age animal ever discovered and practically undamaged. She preserves intact the fur and skeleton as well as muscles fiber and even the whiskers.

The Batagaika Crater keeps growing even if currently, it seems to have slowed down thanks to the new vegetation cover. It is hard to say how much further the crater will deepen and therefore how much back in time the thaw will penetrate. The most ancient permafrost ever date is 740,000 years old and it is found in the Canadian Arctic.

Nevertheless, increasing Thermokarst is not only the result of a warming climate but could become a cause of rising temperature in the future. Actually, 50% of Earth’s methane gas, a powerful greenhouse gas, might be stored in the Northern Emisphere permafrost.

Something similar has been found to occur at the end of the last ice age, about 20,000 years ago as reported by Tesi et al. in this work published in 2016. Scientists detected massive remobilization of permafrost carbon during post-glacial warming followed by a significant spike in temperature. Something that could happen again.