Yet another very strong typhoon, named Molave (Quinta), is on the way for Vietnam this week. It is the 4th storm of the month. And it is undergoing an explosive development right now, expected to be devastating for the country! More than a million people are under urgent evacuation! Typhoon Molave landfall is expected in the central and eastern parts of Vietnam over the next 24 hours. Destructive storm surge and deadly flooding/landslides are expected.

Typhoon Molave is now rapidly gathering strength over very warm waters of the South China Sea. It is becoming a very powerful storm while heading due west towards Vietnam. It will come ashore on Wednesday (local time) with destructive winds and storm surge. Major flooding is expected.

Typhoon Molave is likely very near its peak tonight. It has increased its winds from 80 to 110 knots (90 to 125 mph) over the past 24 hours (06-06 UTC period), which indicates a solid rapid intensification process.

Satellite imagery indicates an explosive convective activity across the eastern portions of the typhoon’s structure.

Molave has formed in the Philippines Sea last week and gradually organizing into a typhoon while crossing the Philippines this past weekend. It soon began a more rapid intensification once it emerged onto the warm waters of the South China sea.

Molave is the 4th storm of the month

Typhoon Molave is the 4th storm to hit Vietnam so far this month during which the excessive rainfall, flooding, and deadly landslides killed more than 130 people.

Vietnam authorities are urgently evacuating more than 1 million people ahead of the approaching dangerous typhoon. They are comparing Molave with Typhoon Damrey back in 2017 which killed more than 100 people in central Vietnam.

Typically, October is the rainy season in Vietnam. While this year, the amount of rainfall is beyond exceptional as the effect of several storms that were pounding the nation for weeks. These systems have strongly impacted the agriculture, irrigation, and transport across Vietnam.

While Vietnam is used to receive destructive tropical storms and associated deadly flooding along its long coastline. Almost 12 million people in Vietnam’s coastal provinces are exposed to the threat of severe flooding, while landslides are occurring in the wake of the coastline where the topography is much higher.

The strongest storms which hit Vietnam this month were a Tropical storm Nangka in early October. It caused several fatalities and major flooding across both Cambodia and Vietnam. Cambodia is the next country to the west of Vietnam.

Molave has begun its rapid intensification on Monday, soon after it emerged into the South China Sea and ejected off the Philippines. An intense eyewall has appeared on the microwave satellite scans. The central pressure was also begun rapidly deepening over the past 24 hours.

The attached NASA MODIS infrared satellite scan below reveals that the cloud tops temperatures are already extremely low, close to -90 °C at times!

There was also an eye appearing on both Monday and Tuesday at the time, but it has not managed to completely clear of clouds at the end. Nevertheless, explosive storms were constantly ongoing.

Molave is a high-end Category 3 typhoon and at a borderline to a Category 4 strength (as of Saffir-Simpson scale).

Advanced Dvorak Technique (ADT) estimates are indicating that Molave is becoming a very powerful and rather large typhoon. Its tropical-storm-force 50-knot winds are spread across the 50-80 mile radii.

Molave is moving across the very warm sea waters of the South China Sea. About 29 °C is spread between Vietnam and the Philippines.

Notice there are also extremely warm, near-record hot waters over the Philippine Sea. More than prone to any additional storms forming in the coming weeks over the Western Pacific. 30-31 °C is spread across the whole western Pacific.

Molave has indeed formed over these hot waters, lose some of its strength while the cross the Philippines, and re-strengthen again when its storms began fueling from the South China Sea on Monday. This also supported the rapid intensification of the system.

Typhoon Molave is forecast to track generally west-northwest over the 24 hours and make a destructive landfall on eastern Vietnam on Wednesday this week.

Although the models hint the strongest winds would remain offshore, the intensity of Molave is significant. The system’s violent winds will be devastating for the coastal areas, including extreme rainfall, flooding, and coastal erosion from the life-threatening storm surge. 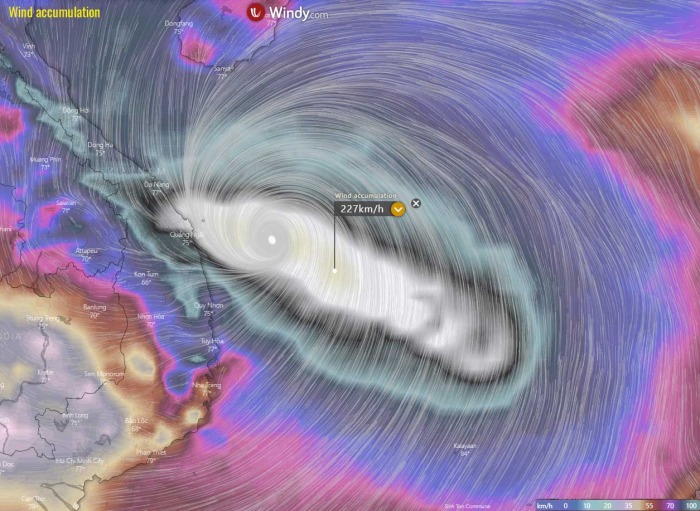 Attached is the video animation of the 10-meter wind gusts and surface pressure for Molave. The animation also expends further through the remainder of October and early November.

An extremely dangerous situation is developing, as Vietnam will be severely hit by violent winds, storm surge, and a huge amount of rain with flooding. With the history of already three devastating tropical cyclones this month, the country is literally soaked and any additional rainfall will make it even worse.

A significant amount of rainfall is expected across the eastern and northeastern parts of the country, especially very near the Typhoon Molave core where the strongest storms are ongoing. The weather models are simulating 400-600 mm of rainfall is possible over the next few days.

Destructive flooding caused by such an extreme amount of rainfall is unavoidable. Such an amount would be very dangerous with only a single typhoon pass, but as Molave is the 4th in a row, there is a deadly situation unfolding.

WHAT IS A TYPHOON? 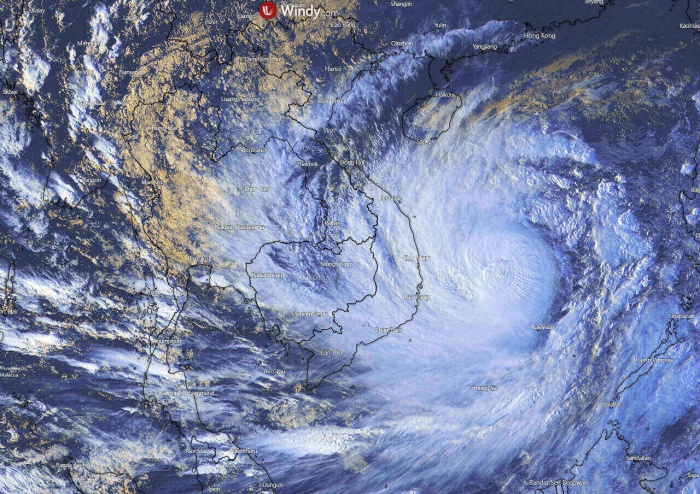 Stay tuned for further updates of the Western Pacific season activity ramping over the coming days!