It is the peak of the hurricane season and the Atlantic is becoming active. A rapidly developed system formed the hurricane Florence, which intensified into a Category 4 hurricane on Wednesday. It reached the lowest pressure of 953 mbar and peak sustained winds of 130 mph. Hurricane Florence then interacted with an area where significantly sheared environment was present, weakened and collapsed. It is currently a Tropical Storm with sustained winds of 65 mph and central pressure of 996 mbar. Florence is heading further west and is expected to arrive into better non-sheared environment in the next days, so an intensification is likely. It is much too soon to know how Florence may impact the US later next week, if ever actually will. A direct hit/landfall in Carolinas is potentially possible.

Current view of the Tropical Storm Florence from the GOES-16 satellite in visible spectrum. The effect of wind shear on the system is well visible, also a lot of explosive convection is ongoing around its center. 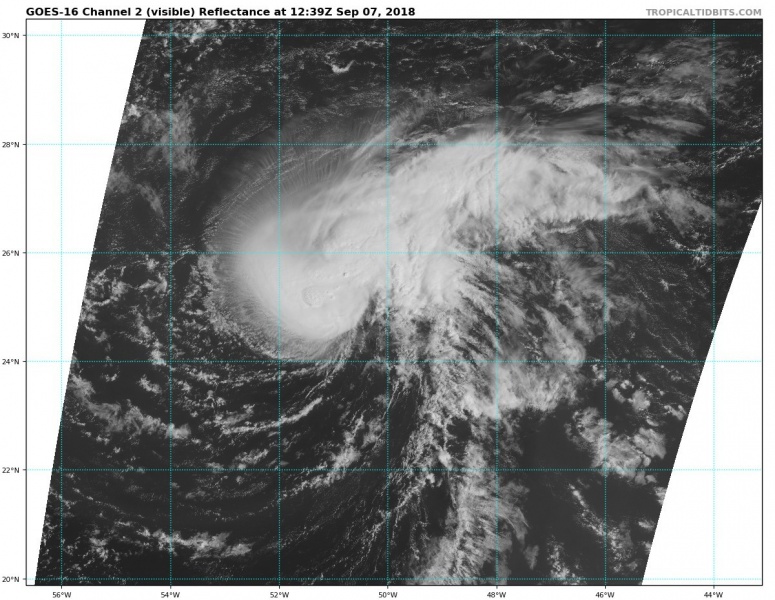 Florence is currently under the strongest shear, which is expected to diminish in the next 2 days as the system moves further west. This will allow the Tropical storm Florence to strengthen back to Hurricane strength on Sunday. It could potentially develop into an intense and major hurricane by mid next week. Global models are hinting at a potential landfall into the US east coast towards the next weekend.

Various models potential track of the hurricane through the next 7 days. Most of the models are pushing it south of Bermuda towards the United States East coast which could potentially be impacted on Thursday, Sept 13th or Friday, Sept 14th. Indeed, still a week until then, too far ahead for any detailed forecasts. 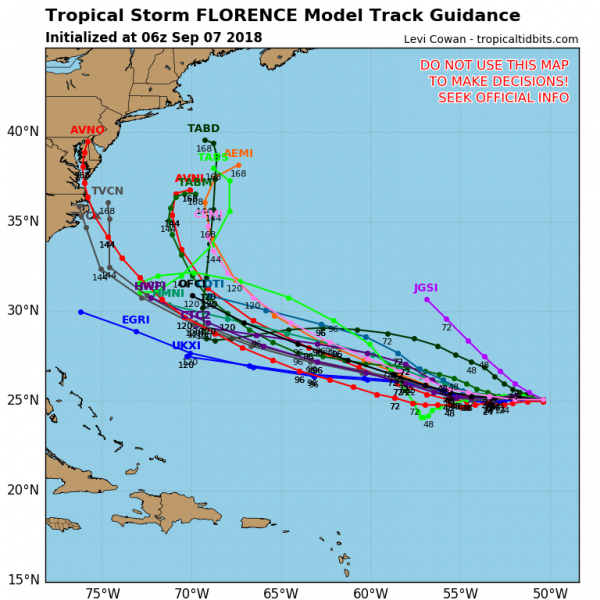 Here is model intensity forecast for Florence – most of the models are trending into a Category 3 hurricane by Tuesday (4 days from now) while some of them are also peaking into Category 4 strength. 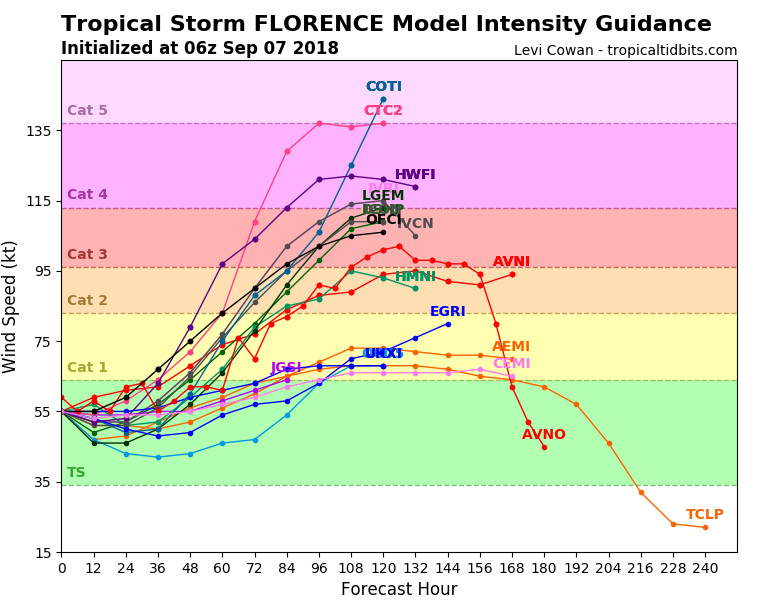 Map of tropical storm force winds potential – Florence would be tracking WNW south of Bermuda but potential for damaging winds over the island is there. However, latest model runs are trending towards a more southerly track than previous days, so it may not hit Bermuda too strong. 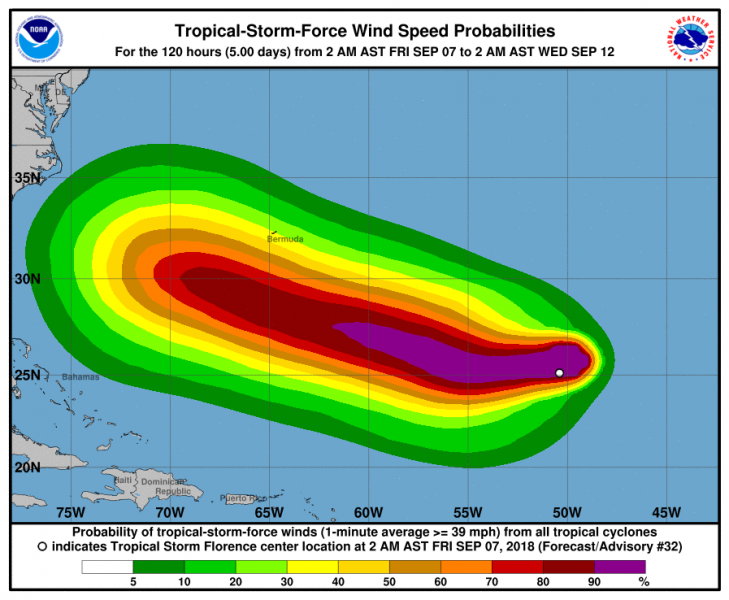 Below are two global model comparison graphics of potential impact of hurricane Florence next week. Note: this is only a deterministic run from both models and far in advance. But we are posting this to see trends from both models. 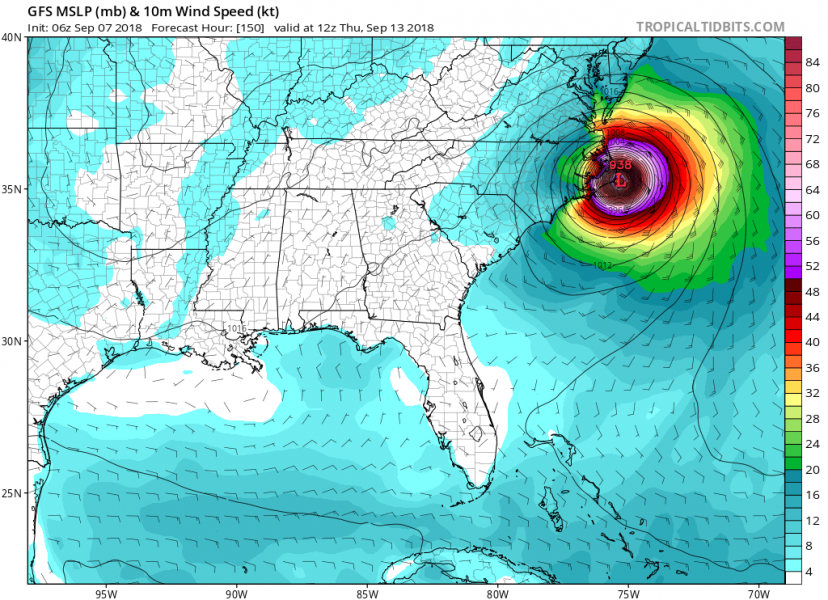 Below is the latest NHC (National Hurricane Center) forecast discussion regarding Florence potential track and development in the coming days:

Florence’s structure continues to be negatively affected by strong southwesterly shear. Cloud tops have generally warmed over the past 6 hours, and recent microwave data show that the low-level circulation center of Florence is displaced nearly 20 nmi to the southwest of the mid-level center. Satellite intensity estimates have decreased since last night, and now support an initial intensity of 55 kt.

Based on GFS and ECMWF SHIPS diagnostic output, the southwesterly shear is near its peak now, and should gradually decrease over the next 24 to 36 h. All of the intensity guidance shows little change in intensity through that time. From 48 h onward, a low shear/warm SST environment should allow the tropical storm to re-strengthen. However, the extent and timing of the strengthening varies greatly from model to model, with the dynamical models generally showing more intensification, and sooner, than the statistical models. As has been the case for most of Florence’s existence thus far, confidence in the intensity forecast, especially beyond 36 h, is low. The new official forecast is a little lower than the previous advisory for the first 48 h, but close to it after that, and lies between the more aggressive HCCA and less aggressive IVCN consensus aids.

Nighttime Proxy-Vis and earlier microwave imagery indicate that Florence has turned westward, with an estimated initial motion of 275/6 kt. Most of the track guidance has shifted slightly toward the southwest, so the NHC track forecast has also been nudged in that direction. Over the next 3 days of the forecast, Florence should be steered generally westward, and then west-northwestward, by a mid-level ridge to its north. By days 4 and 5, a developing mid-latitude trough could create a weakness in this ridge and allow Florence to move more toward the northwest, but there is still considerable uncertainty in the global models and their ensembles regarding the strength of the ridge and if the aforementioned trough will have any notable impact on the track of Florence. The NHC forecast follows HCCA very closely, and is also near the middle of the large combined envelope of the GFS, UKMET, and ECMWF ensembles.

1. Regardless of Florence’s eventual track, large swells will begin to affect Bermuda later today and portions of the U.S. East Coast this weekend, resulting in life-threatening surf and rip currents.

2. There is still very large uncertainty in Florence’s track beyond day 5, and it is too soon to determine what, if any, other impacts Florence could have on the U.S. East Coast next week.

3. Since we are near the peak of hurricane season, this is a good time for everyone who lives in a hurricane-prone area to ensure they have their hurricane plan in place.

Oceanic heat content (OHC) is the heat stored in the ocean. This map reveals a good potential for intensification of Florence through next week when it moves furher west towards the East US coast.

We are monitoring the further evolution of Florence and will be updating with next articles in the coming days – stay tuned!