Here is an overview of the pattern evolution this week. Early September across our continent will be characterized by ridging over northern Europe while some more dynamic weather is expected further south across central and southern Europe. The overall pattern will bring above normal temperatures across much of our continent while below normal temperatures are likely over western Europe and the Iberian peninsula where troughs and frontal systems will be ongoing.

A large, but weakening upper low remains over the northern Mediterranean, expected to diminish while moving onto the Balkan peninsula overnight. Strong ridging remains over Scandinavia where stable weather is expected. A weak upper low is entering SW Iberian peninsula and brings a widespread storm development across eastern Spain and NW Mediterranean this evening and tonight. Eastern and northern Europe remain very warm today under the high pressure system.

Instability and wind shear overlap most favourably over E Spain and NW Mediterranean, so severe storms are likely under the high instability and strong shear. Refer to the forecast link above for the details on the evolution this evening.

Ridging across the northern half of Europe weakens slightly, and three upper lows will be the focus for main convective activity. One is moving across the southern Balkan peninsula while another one remains over the Iberian peninsula. A weak low moves across the Baltic countries. The overall setup across Europe will result in above normal temperatures across much of the continent except for most of Spain and Portugal which will be within the cool side of the trough. 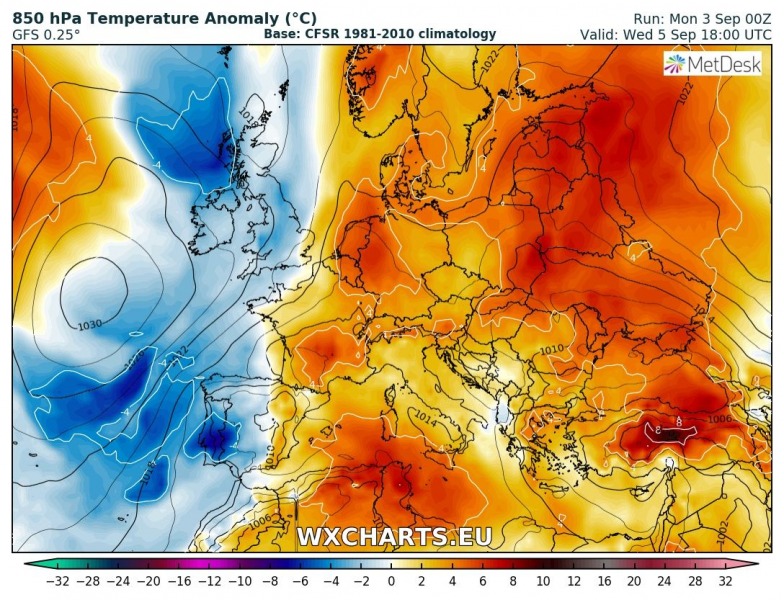 Conditions over the western Mediterranean will support a good overlap of strong to extreme instability and moderate shear, so we can expect more severe storms there. Some convective activity can be expected across NE Europe near the weak upper low. However, lack of wind shear limits severe potential and mostly daytime driven convection is expected. 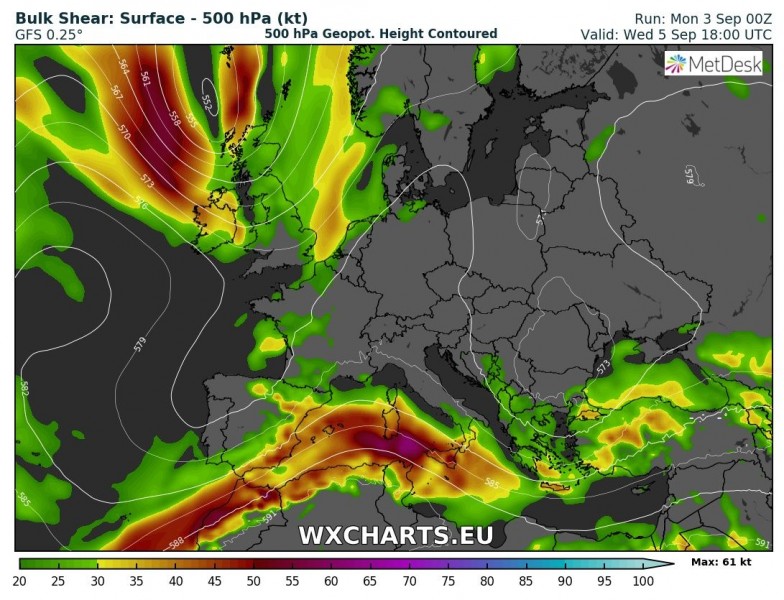 Strong ridging remains over the northern Europe and N Atlantic, while a deep low is pushed into western Europe. The lack of instability limits any severe weather potential there, but still rainy and windy conditions are expected across the British Isles and Ireland. Quite a cold day is foreseen for the weekend. Further south, low geopotentials will cover SW and SE Europe with weak ridging over the southern Mediterranean. 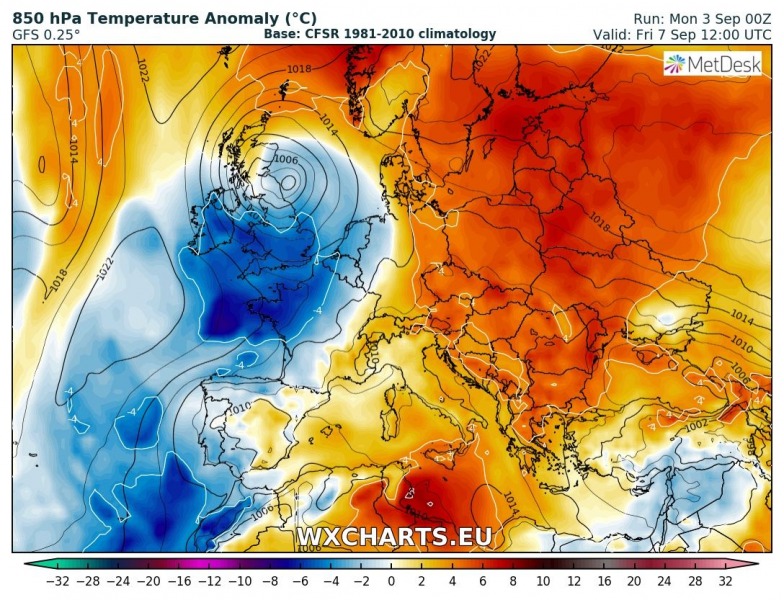 Strong instability will again overlap well with deep layer shear, so we can expect some severe weather across parts of Mediterranean. More details on this setup will be added later this week.

A deep low over western Europe will be pushed towards NE and a ridge strengthens over the Scandinavia. The ridge also strengthens over the southern Mediterranean where less shear will be available within strongly to extremely unstable airmass. A lot of convective activity can be expected, mainly with threat for flash floods. Activity will be also possible towards the Alpine region.

The pattern changes next week with a strengthening upper ridge into western Europe, bringing much warmer weather towards the central Europe as well. Models are trending towards a fairy warm weather return by mid next week. We are monitoring the pattern evolution and will keep you updated. 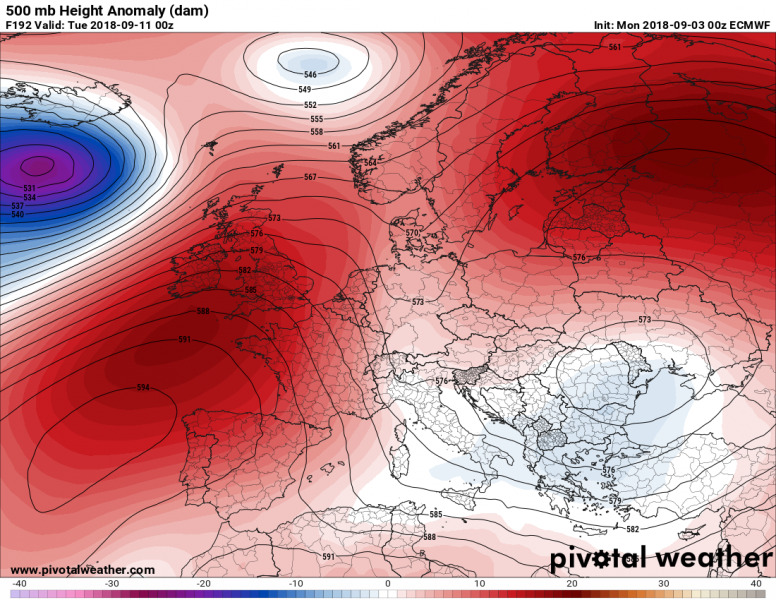 Trends remain towards a strong ridge dominating our continent next week, resulting in very warm weather. Possibly developing another “Rex block” pattern when an upper low is placed to the south of strong blocking. This would bring unsettled weather with lots of storms across the Mediterranean.

Temperature anomaly for the next 5 days revealing a much warmer weather for large part of Europe, except parts of W Iberia and Ireland. 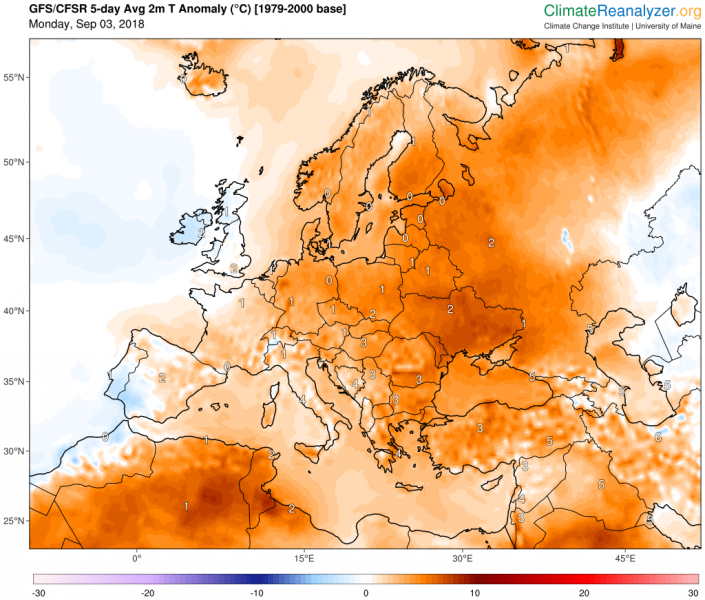