The weather pattern across Europe are soon become more stable. It has been a warm start into this week for many areas. Temperatures should locally climb into the 30-36 °C range again. A so-called Indian summer will develop under an extensive omega blocking pattern.

Much warmer weather is expected to develop over the weekend into next week.

An extensive omega blocking pattern is expected to develop this weekend and strengthen into the next week. A powerful surface high-pressure system will spread across a large part of Europe and bring stable and very hot weather in many areas.

In response to a changing pattern, a very strong warm advection will spread from the south into central and northern Europe. It will bring a stable, around a week-long period of very warm to hot days.

The warm advection starts on Saturday when the geopotential heights begin rising from southern into central and western Europe. Deep trough travels east to the north of a strengthening ridge. 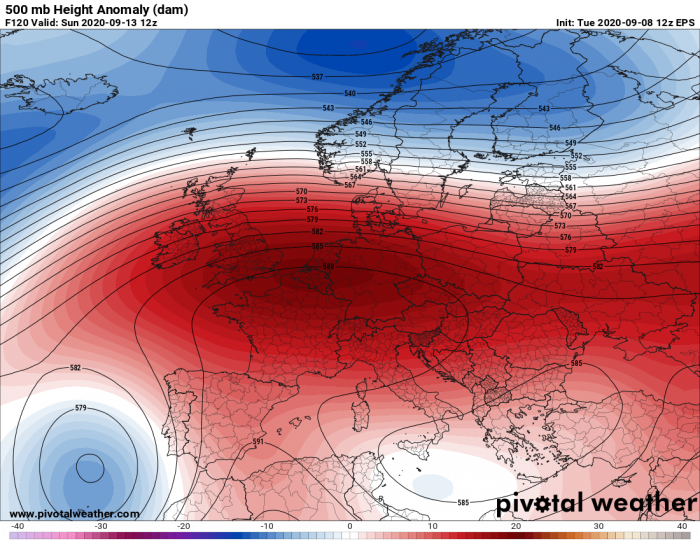 The warm advection spreads from south to north on Sunday. First over central, eastern, and western Europe. It will be 6-10 °C warmer than the long-term average for many areas. 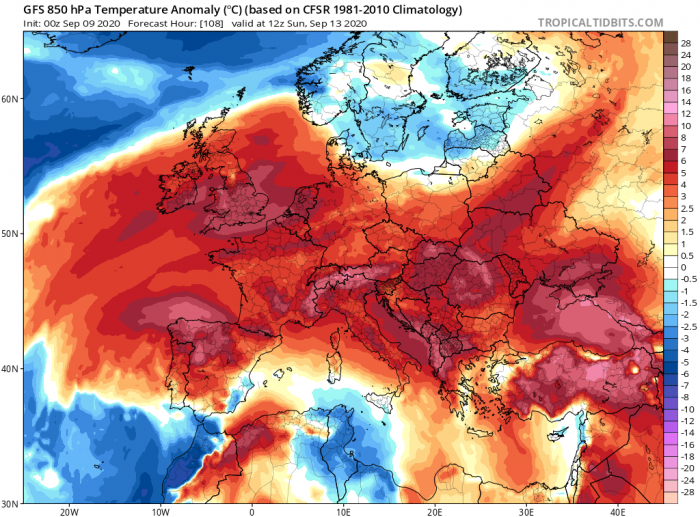 It will be a warm day across northern Spain, France, central Europe, the Balkans, and eastern Europe. 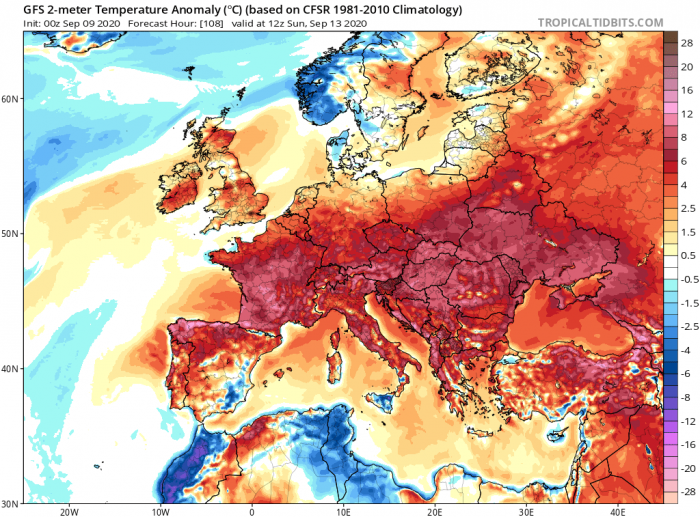 On Monday, the upper ridge significantly strengthens over central and towards northern Europe. It develops a textbook omega-blocking pattern over the European continent.

An upper low is sliding south along its western flank, into the Azores. Another weak upper low is over Libya. Elsewhere, stable conditions are expected. 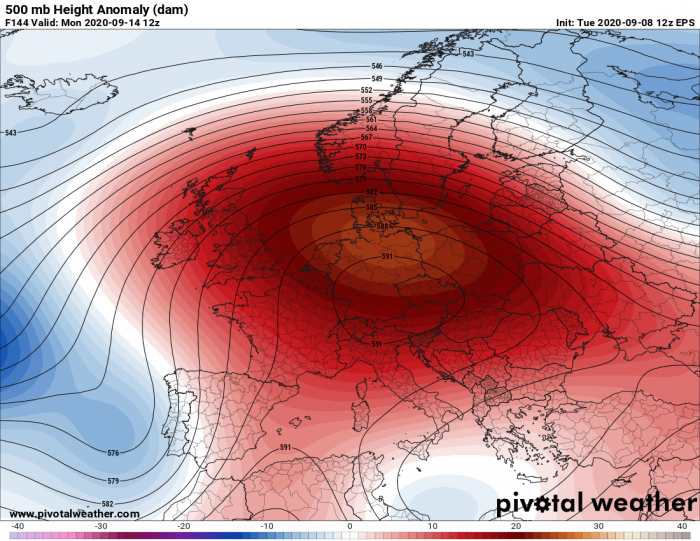 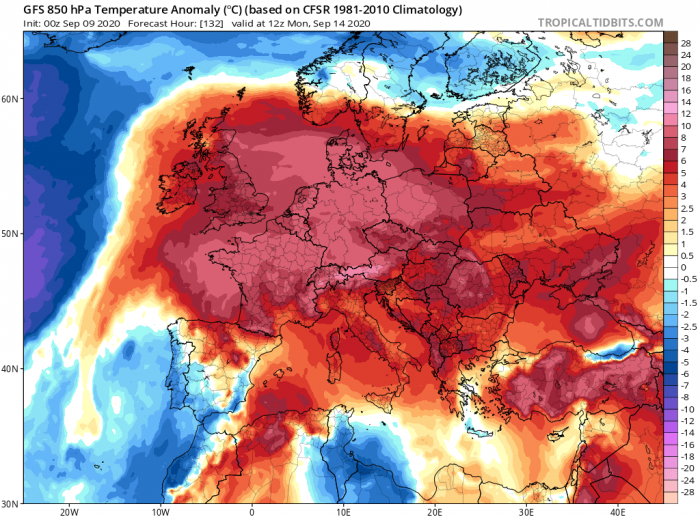 A particularly warm day is expected for France, Germany, and the Balkans. 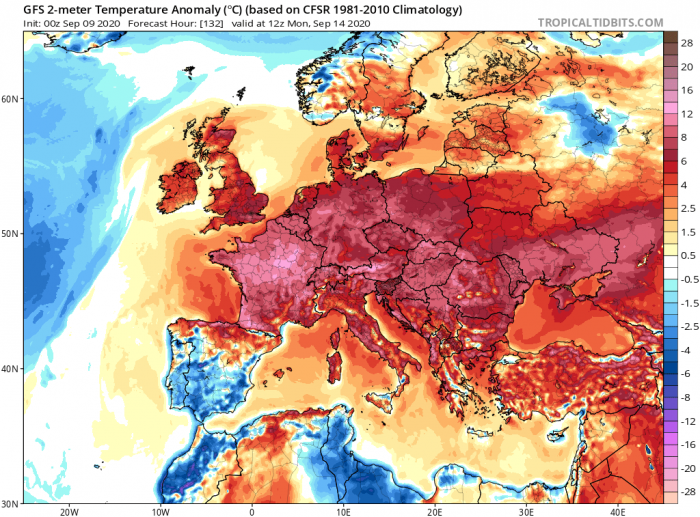 A similar pattern as on the day before is likely on Tuesday. While the upper low over the Azores deepens, a strong and extensive upper-level ridge remains. Its center will be over northeastern Europe. 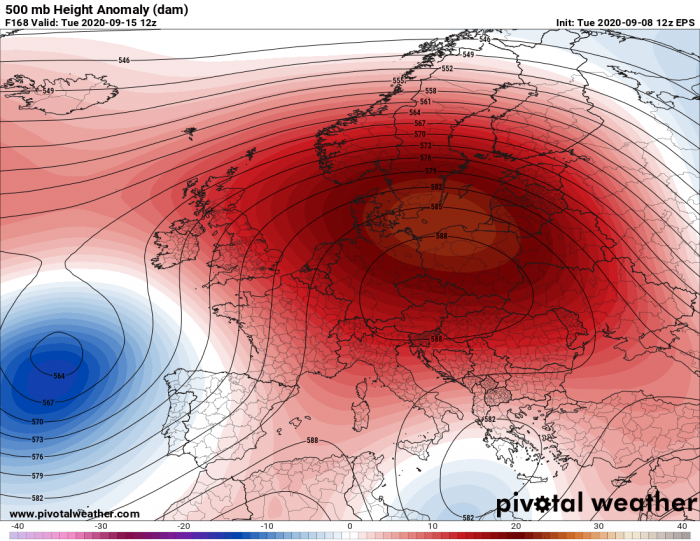 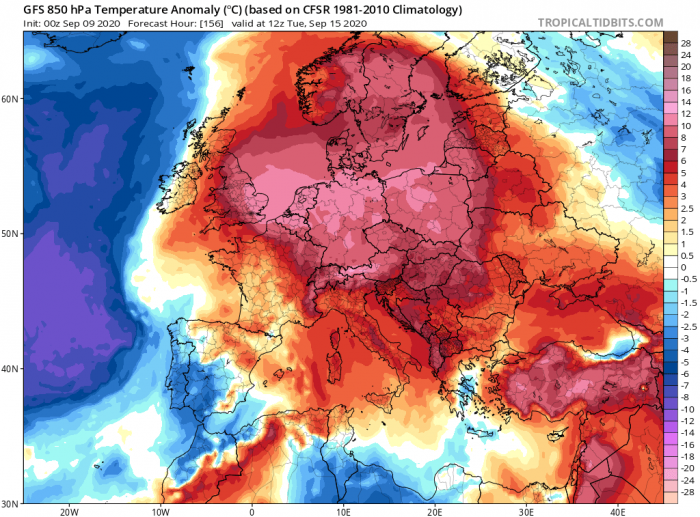 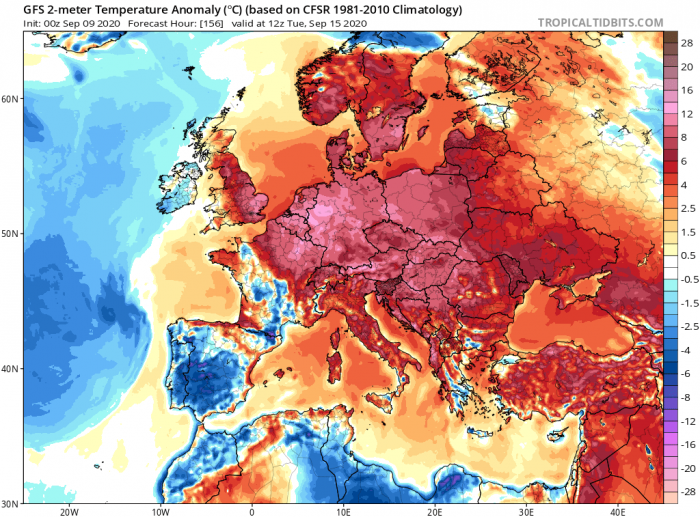 The general pattern could gradually begin changing into the mid/late next week as the upper ridge begins its weakening trend. However, any significant changes aren’t seen yet, so the potential is there that this pattern could well extend into the weekend days. 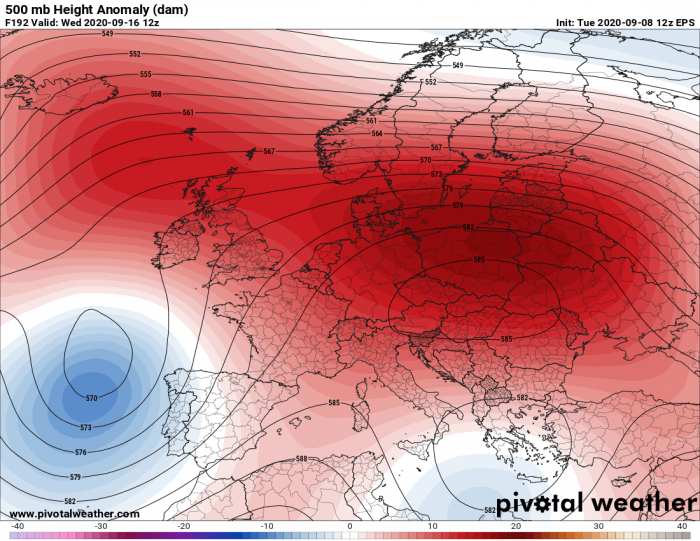 As the ridge turns more towards the northeast, the warm advection and the warmest air mass spreads into the Baltic region. It reaches Finland and northwestern Russia as well. It also cools off in Iberia. 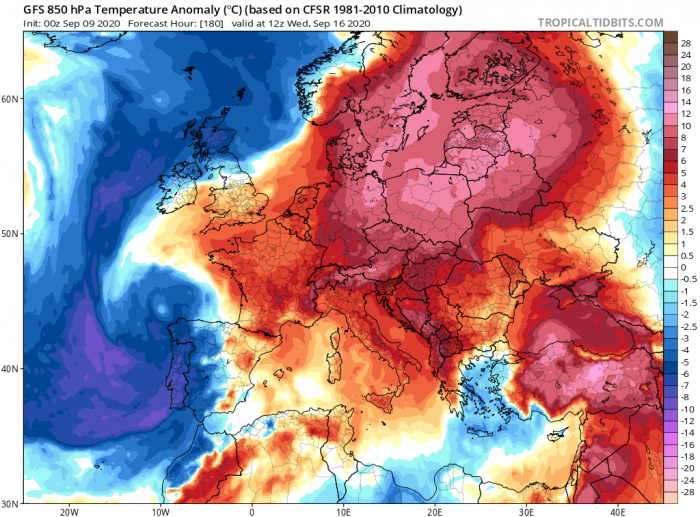 A particularly warm day is likely over Poland, Baltic countries, and southern Sweden. 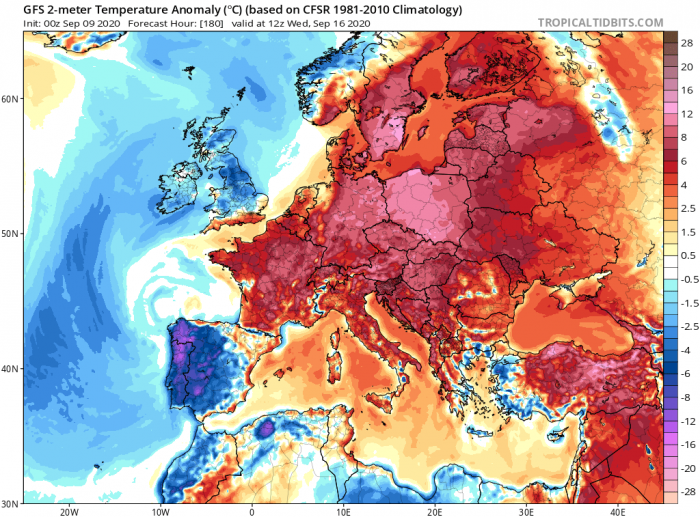 As it often happens with the ‘Indian summer’ warm period, temperatures could climb very high. Even reaching low to mid-30s under a strong ridge’s subsiding air mass, combined with an extra warm advection.

Temperatures on Sunday will reach up to 33 °C in France, up to 28 °C in southern Germany. Low 20s in England. 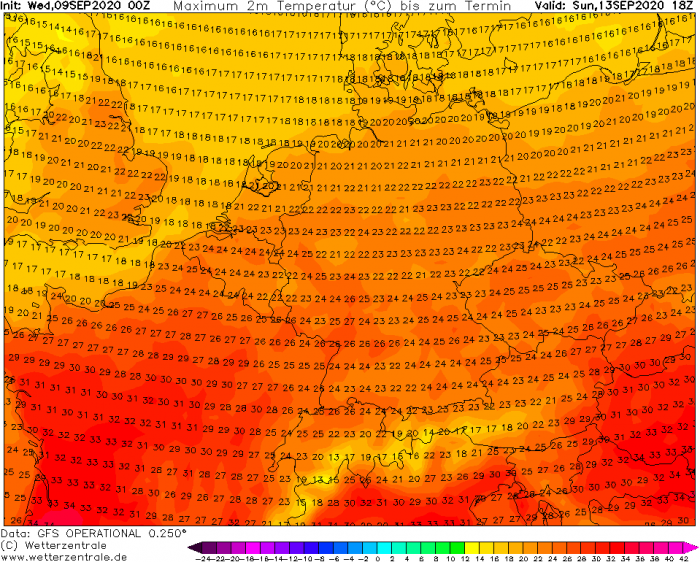 Locally, 32-35 °C can be expected in part of the Balkan peninsula and Italy. 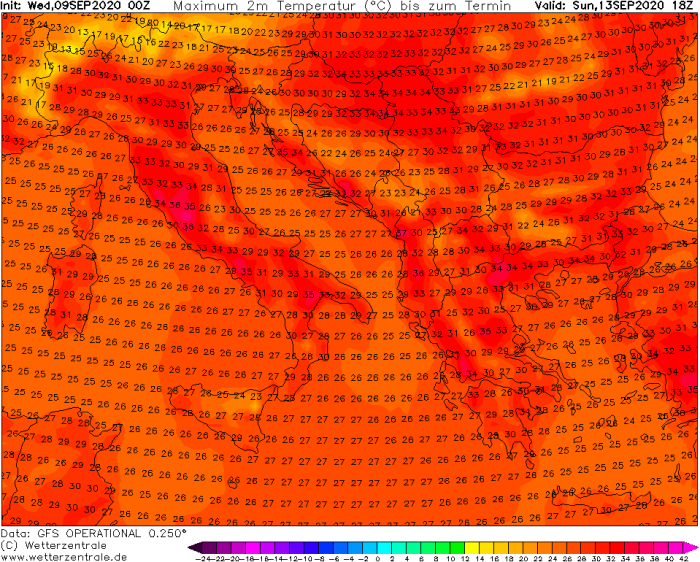 Even warmer temperatures are likely on Monday as both, the upper ridge and warm advection, strengthen. The mid-30s are likely over France, upper 20s in Germany and Poland, mid to upper 20s across England. 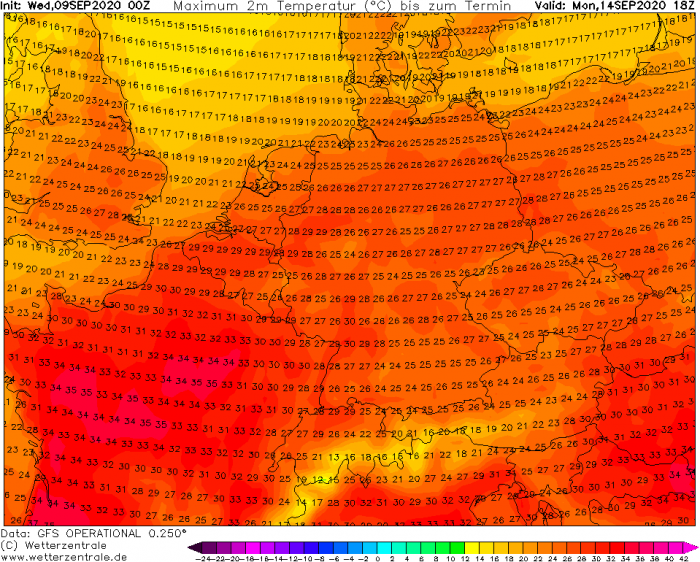 Again, a very hot day is expected across the Mediterranean and the Balkan countries. It can be as hot as around 35 °C in Italy, Croatia, Hungary, Serbia, Romania, and Turkey. 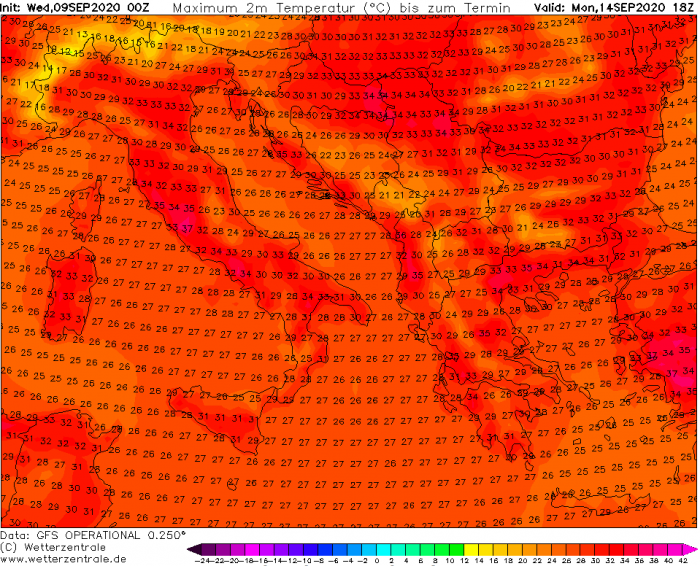 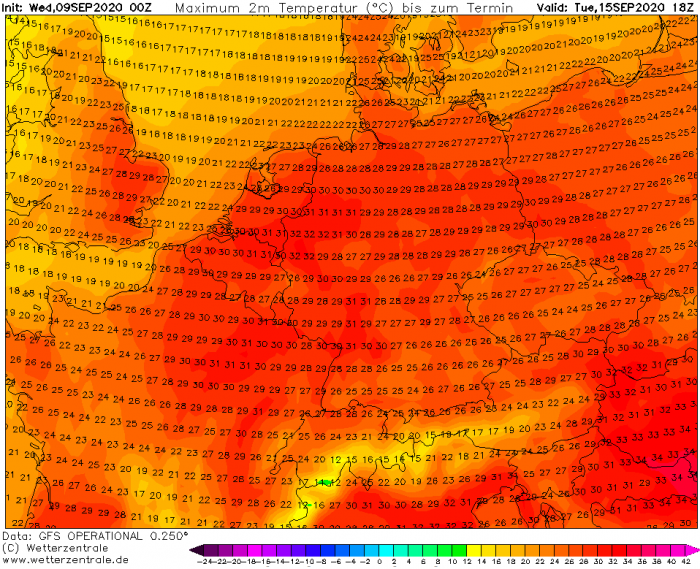 Very hot day over Italy and the Balkan peninsula, again 32-36 °C is quite likely during the peak afternoon hours in some areas. 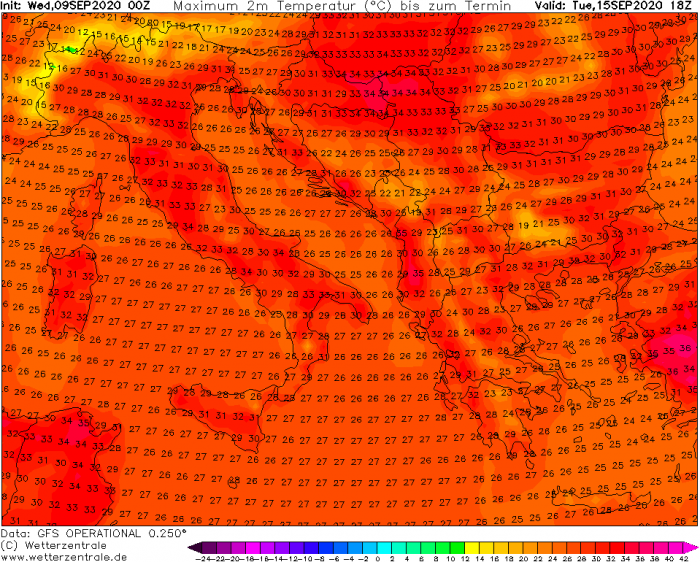 Western Europe cools down in mid-week as Atlantic air mass comes closer into the southwest part of the European continent. Temperatures will likely return into normals over the UK and Ireland.

It remains very warm to hot in France, Germany, and Poland. Also over Sweden, Finland, and the Baltic region. The upper 20s are likely. 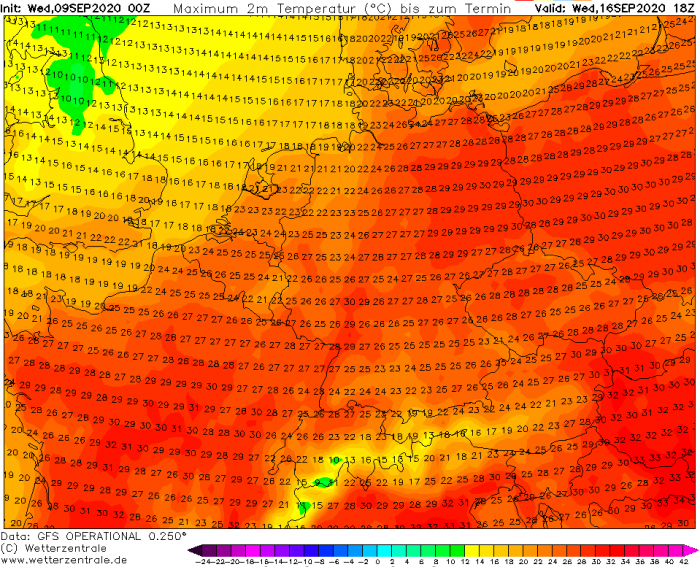 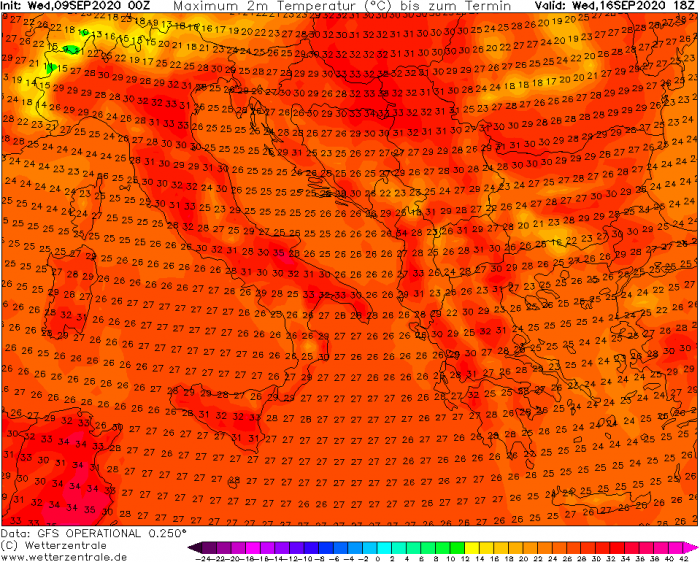 Lots of rain for W Scotland and SW Norway

A strong jet stream will be placed along the northwestern side of the ridge. This means a persistent advection of warm and moist air mass will be underway. Bringing periods of excessive orographic rainfall into the Scottish Highlands and the mountainous terrain of southwestern Norway.

Models are hinting 150-200 mm will locally be possible from Friday through Wednesday. 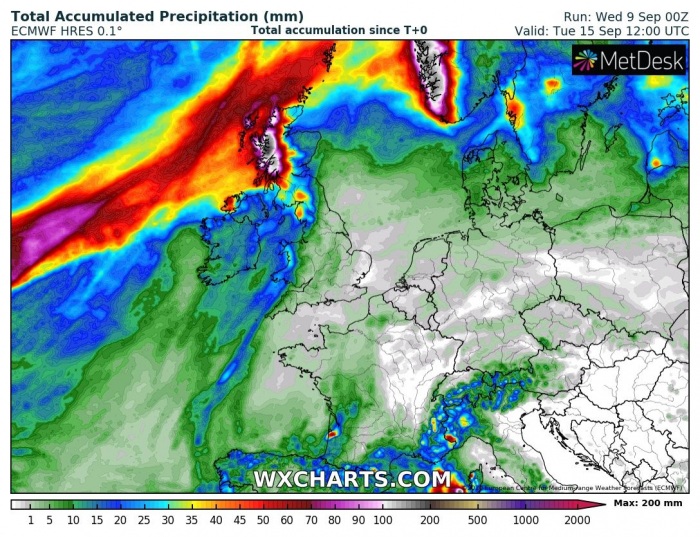 What is the Indian summer?

An Indian summer is a period of unseasonably warm, dry weather that sometimes occurs in autumn in temperate regions of the northern hemisphere from September to November. Similar weather conditions, with local variations, also exist.

Within a number of Slavic-language countries like in the Czech Republic, Ukraine, Poland, Slovakia, Russia, Slovenia, Serbia, and Croatia it is known as ‘old woman’s summer’. They call it ‘babí léto’ in Czechia, ‘babie lato’ in Poland, ‘babie leto’ in Slovakia or ‘bablje ljeto’ in Serbia and Croatia.

In Bulgaria, it is known as ‘gypsy summer’ or ‘poor man’s summer’.

Sweden – they call this period a ‘Brittsommar’ (out of ‘Birgitta’ and ‘Britta’, having their name days around the time, October 7th).

In Gaelic Ireland, the phenomenon is called ‘fómhar beag na ngéanna’ (little autumn of the geese).

In other countries, it is associated with autumnal name days or saint days such as Teresa of Ávila (Portugal, Spain, and France), St. Martin’s Summer (Spain, France, Italy, Portugal, and Malta).

In Turkey it is called ‘pastirma yazı’, meaning pastrami summer, since the month of November was considered to be the best time to make pastrami.

Similar events have happened in the past. In September 2018 it was very hot in Europe.