Eta has now been upgraded to a Tropical Storm as exploding convection is underway. The system is approaching a dangerous crossing of Cuba on Sunday, then Storm Eta will head for the record-breaking 12th United States mainland landfall this season. The extremely active 2020 Atlantic hurricane season continues with 28 named storms so far this year.

Latest on Eta: the Florida Keys landfall was the record-breaking 12th United States landfall this season, new models suggest Eta could become a hurricane on Wednesday

A Hurricane Warning is in effect for the Florida Keys while Tropical Storm Warnings are in effect for southern Florida, central Cuba and the northern Bahamas.

Through this weekend, heavy rainfall will continue across the Cayman Islands, portions of Cuba, and Jamaica, and will spread north into the Bahamas and southern Florida. This rain may result in significant, life-threatening flash flooding and river flooding in Cuba. 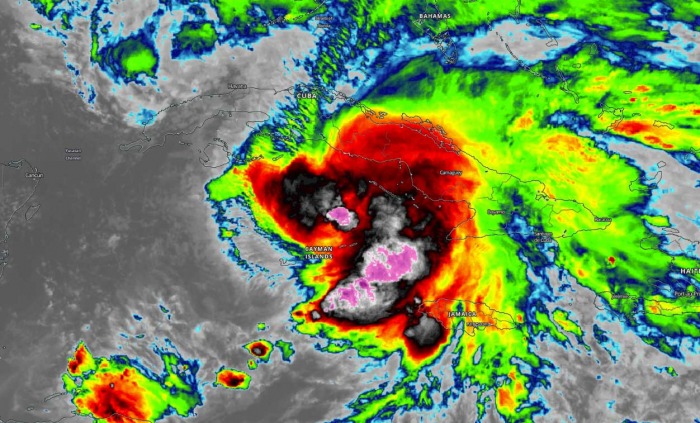 Flash and urban flooding will also be possible for the Cayman Islands, Jamaica, the Bahamas, and southern Florida, along with potential minor river flooding in central Florida.

Tropical storm conditions are expected in portions of Cuba and the northwestern Bahamas tonight and Sunday.

In addition to dangerous flooding, damaging tropical-storm-force winds are expected Sunday night, with hurricane-force winds possible in the Florida Keys and portions of the southern Florida peninsula. 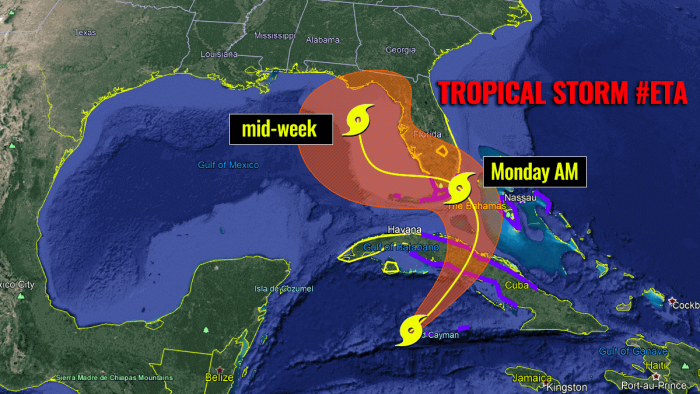 Elsewhere across portions of the east and west coasts of the Florida peninsula, the risk of tropical-storm-force winds will extend well away from Eta’s center, and Tropical Storm and Hurricane Warnings are in effect.

Eta’s landfall in Cuba will be the first November’s landfalling system in this country after a Category 2 hurricane Paloma in 2008.

Hurricane Kate (1985) hit Mexico Beach, Florida on November 21st. It remains the strongest and the latest hurricane on record that hit the mainland United States in the month of November.

The 2020 Atlantic hurricane season has had a record-breaking 11 landfalls of tropical storms (or hurricanes) in the United States mainland this season.

Hurricane Delta and Zeta have helped the season to break the previous record of nine landfalling systems more than 100 years ago – in 1916.

Hurricane Delta was the first hurricane named after a Greek alphabet letter use which made landfall on the United States mainland.

The eleven (11) named storms that made landfall in the continental United States this year (2020) so far are Bertha, Cristobal, Fay, Hanna, Isaias, Laura, Marco, Sally, Beta, Delta, and Zeta.

If Eta indeed makes landfall in Florida on Monday, it will be the 12th United States mainland landfall this season. A remarkable improvement of the already record-breaking landfalls of any season on record.

The sea surface temperatures remain very warm in the Western Atlantic, and extremely warm over the Caribbean region. 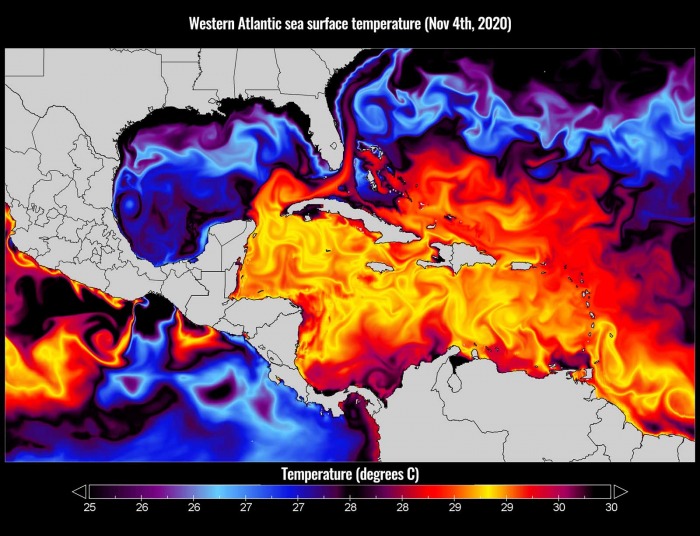 Those are definitely prime oceanic conditions as sea waters remain much higher than the long-term average. So Tropical Storm Eta has the most important ingredient ready to fuel its storms significantly.

Therefore, such conditions are strongly supportive of rapid or even explosive development of thunderstorms. Just like hurricane Eta did this week, entered an extremely rapid intensification phase when moving towards the central American coast.

The majority of the North Atlantic, tropical Atlantic, and the Caribbean remain well-above average. The Eastern Pacific is also very hot, past 30 °C and therefore several degrees above normal. About 1-2 °C warmer sea waters are also across the Northwest Atlantic.

As can be seen from the Ocean Heat Content (OHC) map below, the values are quite high (near or even higher than 100) across the northwestern Caribbean and around western Cuba (southeastern Gulf of Mexico). 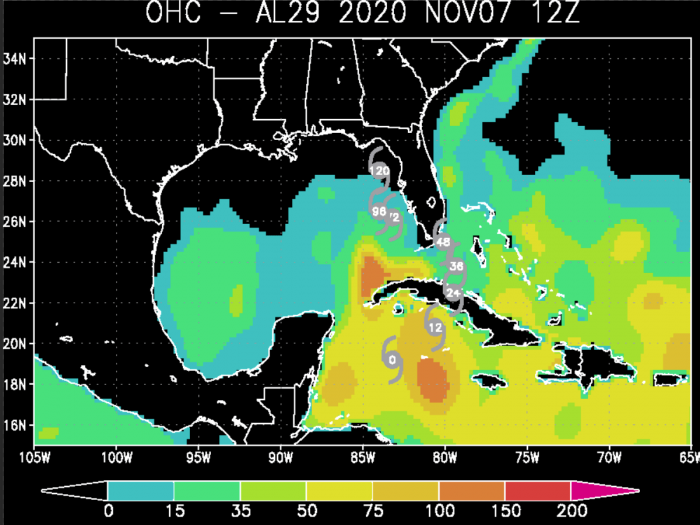 This is exactly where Tropical Storm Eta will travel on Saturday night before making landfall in Cuba on Sunday. The system should strengthen while traveling over these warm waters, it could even rapidly intensify and reach hurricane strength again.

Although waters are slightly cooler over the Gulf of Mexico, there are still warm waters across the eastern portions of the Gulf and around Florida, including the Bahamas, and along the East Coast of the United States.

After Eta crosses Cuba, it will re-emerge on its way towards the landfall in southern Florida or the Florida Keys.

Both satellite analysis and the NOAA Air Force Reserve Hurricane Hunter aircraft suggest that Eta had strengthened to 50 knots (60 mph) with a central pressure of 994 mbar. Eta has been upgraded to a Tropical Storm again.

Since that time, the storm organization is unchanged in satellite imagery, while the central convection looks a little more ragged in radar data from Grand Cayman Island and Cuba. 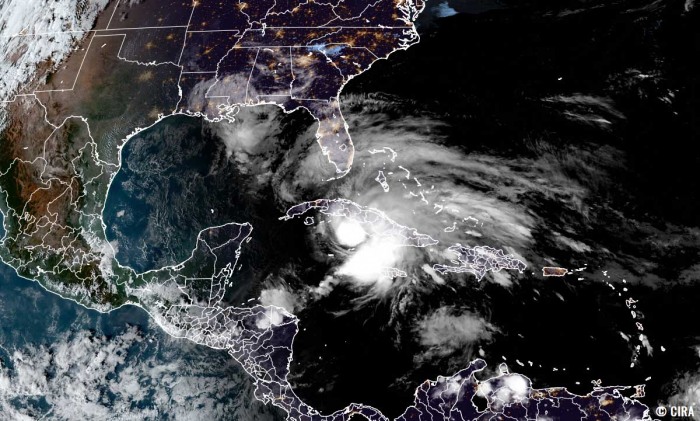 Eta’s initial motion is now towards northwest with about 14 knots.

ETA’S LANDFALL IN CUBA ON SUNDAY, THEN ON TO FLORIDA

A mid-to upper-level trough over the Gulf of Mexico should steer Eta northeastward for the next 12 h or so, which would bring the center near or over the coast of central Cuba.

Then from 12-96 h, the trough should cut off into a closed low near western Cuba, with Eta turning northward and eventually westward near the Florida Keys and south Florida as it merges with the low. 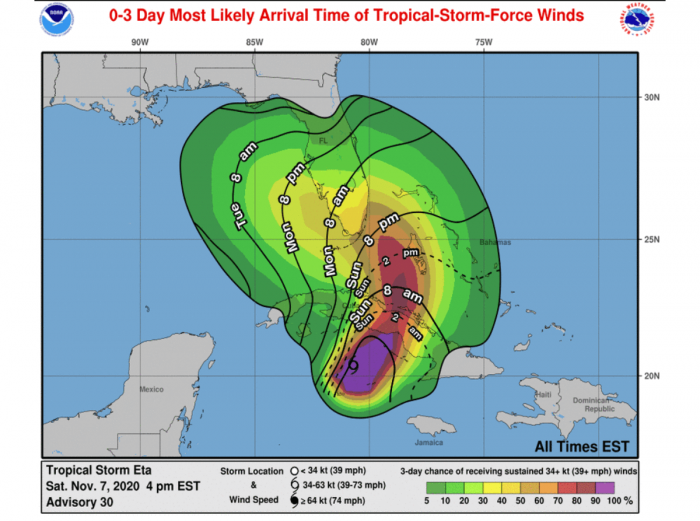 There are possibilities that the system could also become a hurricane prior to landfall in Cuba, some models suggest.

A strong upper-level divergence caused by the trough is allowing Tropical Storm Eta to continue strengthening. The intensity model guidance shows additional intensification during the next 24-36 h with Eta potentially peaking near 60 knots (70 mph).

This would be the high-end Tropical Storm strength. And for this reason, the NHC has issued a hurricane watch for the Florida Keys and portions of South Florida. 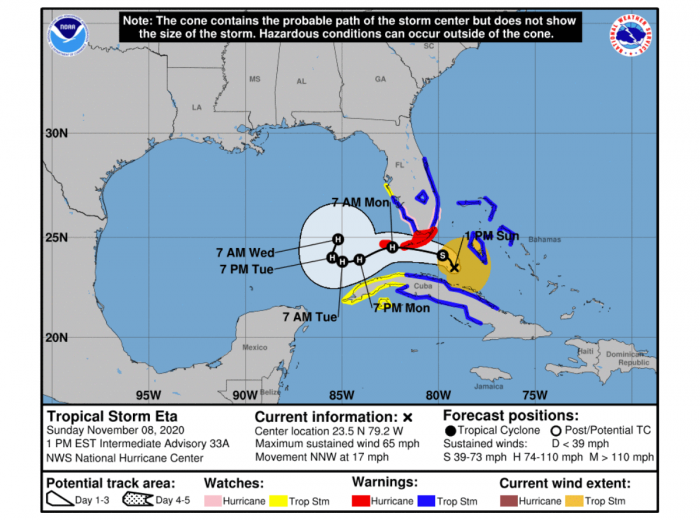 The amount of rainfall (map provided by Windy.com) should be the highest concern for Cuba. Attached is the ECMWF model chart for the next 10-days rainfall totals. An additional 10 to 15 inches (400 mm) seems possible between the Cayman Islands and Cuba, possibly even more.

Heavy rains are then also expected when Eta re-emerges north of Cuba on Sunday night into Monday. Especially across southern Florida, the Florida Keys, and the Bahamas. 6-10 inches (150-250 mm) of rain will be possible.

But as the exact locations of storm clusters are hard to predict, locals have to monitor Eta’s progress closely. Life-threatening flash floods could occur in some areas. 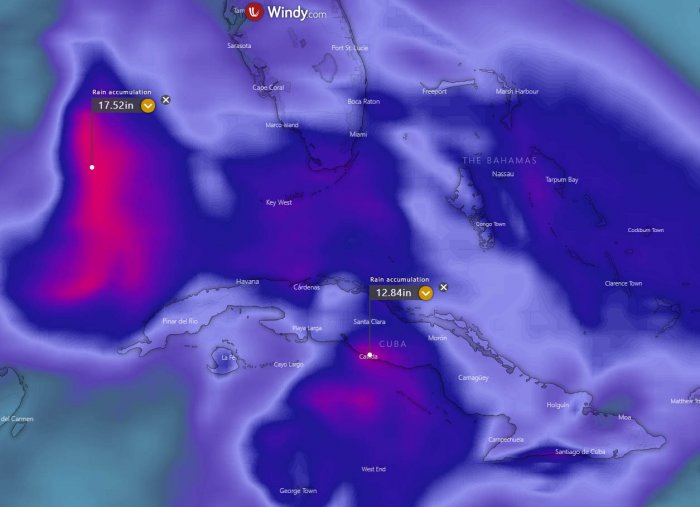 Huge amounts of rain are very likely over the eastern portions of the Gulf next week, as Eta’s forward speed will be very slow. Models are hinting 15-20 inches (400-500 mm) of rain will be possible there. However, those rains should remain off the land areas, model guidance suggests.

After Sunday night, Eta will begin turning north and then northwest and travel towards the landfall in southern Florida and the Florida Keys. The exact track remains is still somehow uncertain, as the exact effect of Cuba’s complex terrain on Eta’s convection is hard to predict.

Ensemble models are, however, is quite a good agreement that Eta will make landfall in southern Florida or the Florida Keys on Monday. Ensemble perturbations also hint that areas further north along the western Florida peninsula have to monitor Eta’s progress next week very closely, as another potentially dangerous landfall could occur. 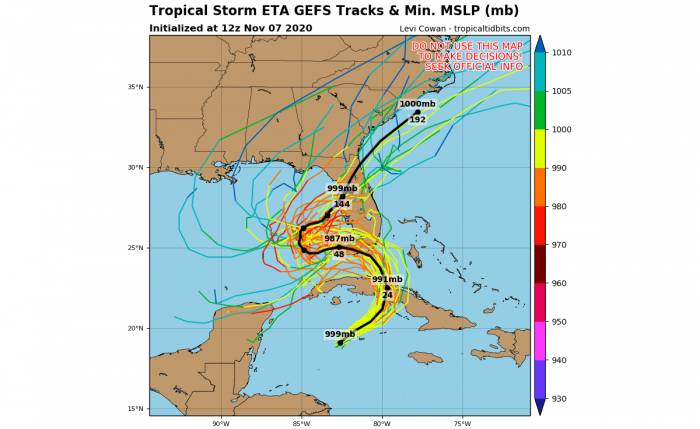 Nevertheless, residents in southern Florida, the Florida Keys, and the southwestern Bahamas should closely monitor the progress of Eta over the next 48 hours. 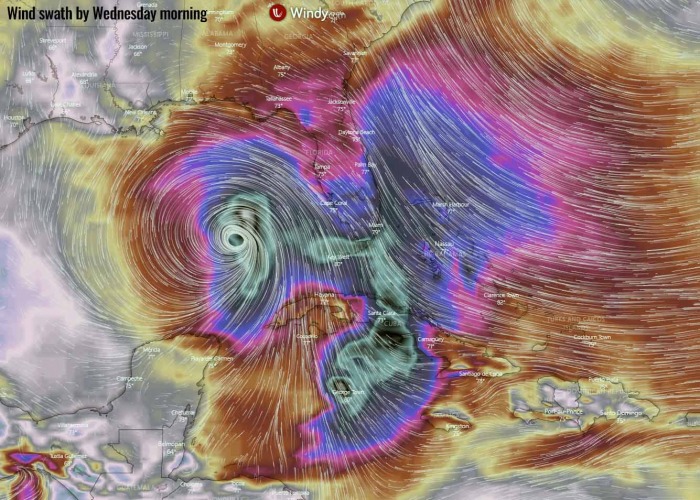 The map above (provided by Windy.com) is the ECMWF model guidance regarding the peak wind gusts swath with Eta until Wednesday next week. We can see that dangerous winds are forecast across central Cuba, towards southern Florida, and over the Florida Keys.

Eta could even intensify into a hurricane sometime from Tuesday through Thursday while traveling into the eastern portions of the Gulf of Mexico. But this is yet to be defined in the coming days.

We are facing unprecedented times for the named storms for any Atlantic hurricane season on record. 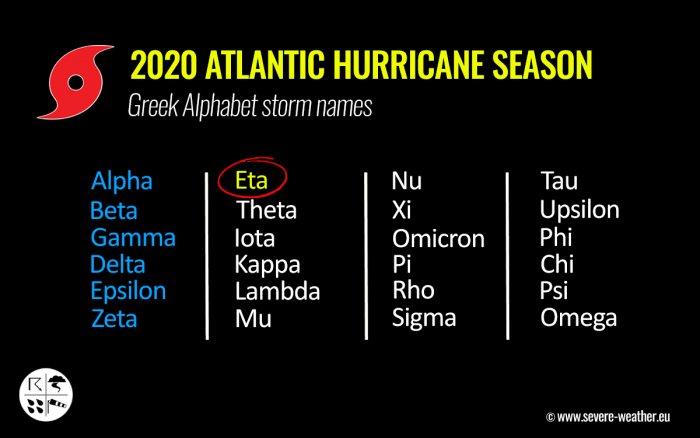 The 2020 Atlantic hurricane season remains on course for a record-setting year to date, Nov 3nd. There were 28 named storms, which is about 248 % of the long-term average (11.3) for this time period. So far, there were more than double the number of hurricanes (12) and five (5) major hurricanes (Laura, Teddy, Delta, and Zeta).

Hurricane Eta was the 5th major hurricane of the season.

26 storms out of those 28 total, had the earliest formation date on record.

Major hurricanes Laura, Teddy, and Delta have all peaked at Category 4 strength. Laura and Delta both made destructive landfalls in Louisiana.

The southern parts of Louisiana along the central Gulf Coast of the United States, were a hot spot this year. There have been 5 storms that made landfall in Louisiana. 3 of those five were hurricane landfalls (Laura, Delta, and Zeta).

Laura made landfall as a Category 4, while Delta and Zeta were a Category 2 when they came ashore in Louisiana. Laura and Delta affected the same areas with severe wind and storm surge damage. Zeta made landfall further east, due south of New Orleans. 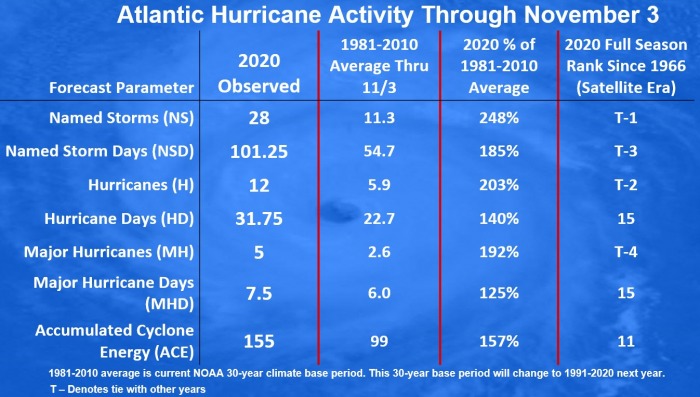 There have been 101 named storm days so far, which is around 185 % of the average number (54.7). As we can see from the statistical graphics above (see the column 2nd from the right), all the forecast parameters are above average.

The current Atlantic basin ACE is, as of November 3rd, held at 155.0. That is an impressive 57 percent higher than during a normal season to this date (99.0).

But the number is not final yet as Eta will re-emerge over the Caribbean again.

2005 had three (3) additional storms more forming in November, while 2020 is currently at one storm formation (Eta formed on Nov 1st).

With potentially a few more storms forming through November, we are definitely aiming towards Nu or Xi storm names. That would be halfway through the Greek Alphabet names.

Nevertheless, there is still a long way to go before we will be closing the books of this historic 2020 Atlantic hurricane season. Officially almost a month, possibly even more if December indeed produces more storms.

We will be covering the tropical activity further, providing regular updates on the ongoing activity. Stay tuned!