Although forecasts during the previous days were expecting the Tropical Storm #Sebastien to strengthen into a hurricane today, strong wind shear is gradually causing more significant weakening effect on the tropical system. Based on satellite data and 18 UTC analysis, storm still had a solid storm-force strength and packing winds of 50 knots with a central pressure around 999 mbar. But the system is weakening and should transform into an extra-tropical cyclone and likely dissipate within the next three days. It appears increasingly likely Sebastien will not be a threat to Europe anymore.

Satellite imagery was still quite impressive this morning, with deep convective cluster ongoing across the eastern parts of the storm, especially across the NE quadrant where long-lived storm cluster is still ongoing. However, the latest analysis indicates Sebastien is struggling to maintain its intensity due to stronger deep-layer shear and drier air from the west, associated with the frontal zone to its north. This is causing a more significant weakening of the system.

Although forecasts from earlier this week expected #TropicalStormSebastien to strengthen into a #hurricane, strong wind sheer is gradually causing the system, seen here by #GOESEast, to weaken. The #storm is expected to dissipate within three days. More: https://t.co/uIFQ89OPYz pic.twitter.com/njoV4QQVlS

The official NHC track now suggest Sebastien will remain a tropical storm until Sunday when it weakens and transforms into an extra-tropical cyclone. Also visible on the latest global GFS model, the system continues weakening along its path and dissipating before even reaching the Azores on Monday. 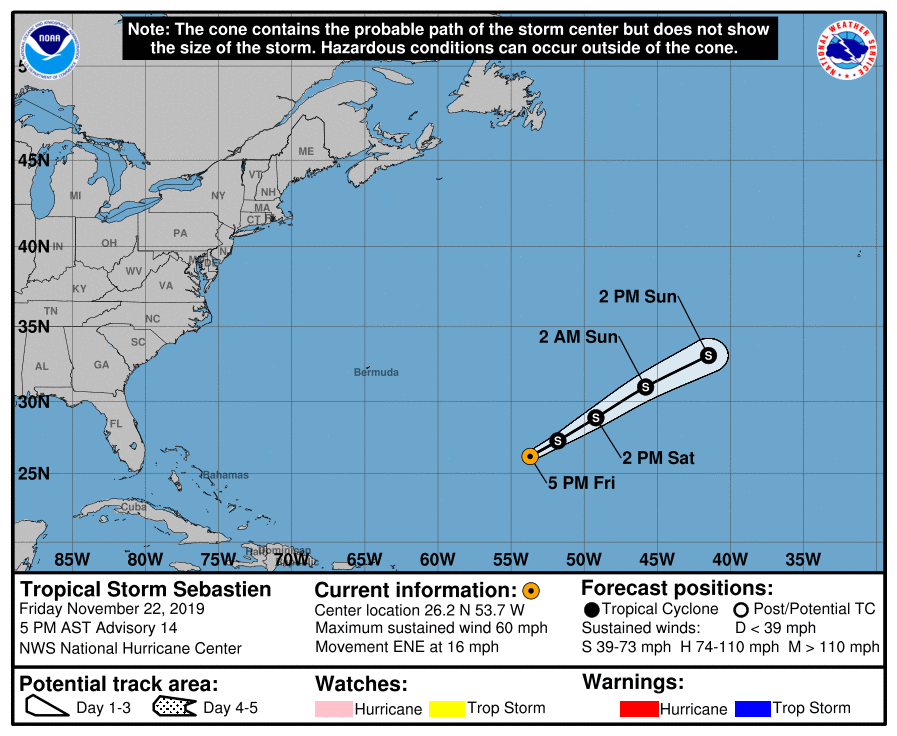 This is probably our last update on the system unless there are any significant changes in Sebastien’s intensity this weekend. The system will move towards the Azores as an extra-tropical cyclone after Sunday but should weaken and likely not bringing any significant threat to the archipelago.

Tropical Storm #SEBASTIEN develops north of the Lesser Antilles, heads towards North Atlantic or even WSW Europe early next week