On the 29th of December 2018, the VIIRS sensor aboard the NOAA-20 satellite measured the Earth’s record low temperature ever. The lowest temperature reached an unprecedented -111 °C (-168 °F). The tops of the thunderstorm clouds have reached an altitude of over 20.5 km (12.8 miles) above sea level.

We always love to see those impressive explosive thunderstorm clouds, with huge anvil clouds atop of the rising updrafts. Those are quite typical for unstable days in the summer. The higher they go, the cooler the temperature of the cloud tops appears.

The recent scientific research paper has found that the cloud tops temperature of one tropical thunderstorm cloud system has reached an exceptional -111 °C (-168 °F) at the end of 2018, just south of the equator in the southwestern Pacific. It looks like those clouds have set a record low temperature ever observed on Earth.

These clouds which reach so high, are known as the Overshooting Tops (OT) and are actually quite a common occurrence with thunderstorms around the world. They can be several degrees cooler than the surrounding air, as they rise past the tropopause layer into the lower stratosphere.

Below is an example of such explosive deep convection that led to the rapid development of a Category 5 Tropical Cyclone Yasa near Fiji in the southwestern Pacific. These deep convection towers often produce overshooting tops with extremely low cloud top temperatures.

The key meteorological process that is responsible for much of our hazardous weather around the world, such as lightning, hail, winds and heavy rainfall is convection. The lifting of warm air from low altitudes to higher altitudes.

Isolated convective cells are common around the globe, often taking on an anvil shape when the air in the storm’s core (updraft) pushes high enough and meets the natural temperature inversion at the tropopause. Normally, the rising air then spreads horizontally to form a large cloud with a relatively flat top. That is an ‘anvil cloud’.

If the updraft is strong enough, it can push through the tropopause even higher and penetrate into the lower stratosphere. It forms a so-called overshooting top (OT) that can reach several kilometers above the anvil, depending on how strong the updraft is.

Overshooting tops indicate that a thunderstorm is a particularly severe storm that can produce hazardous weather. 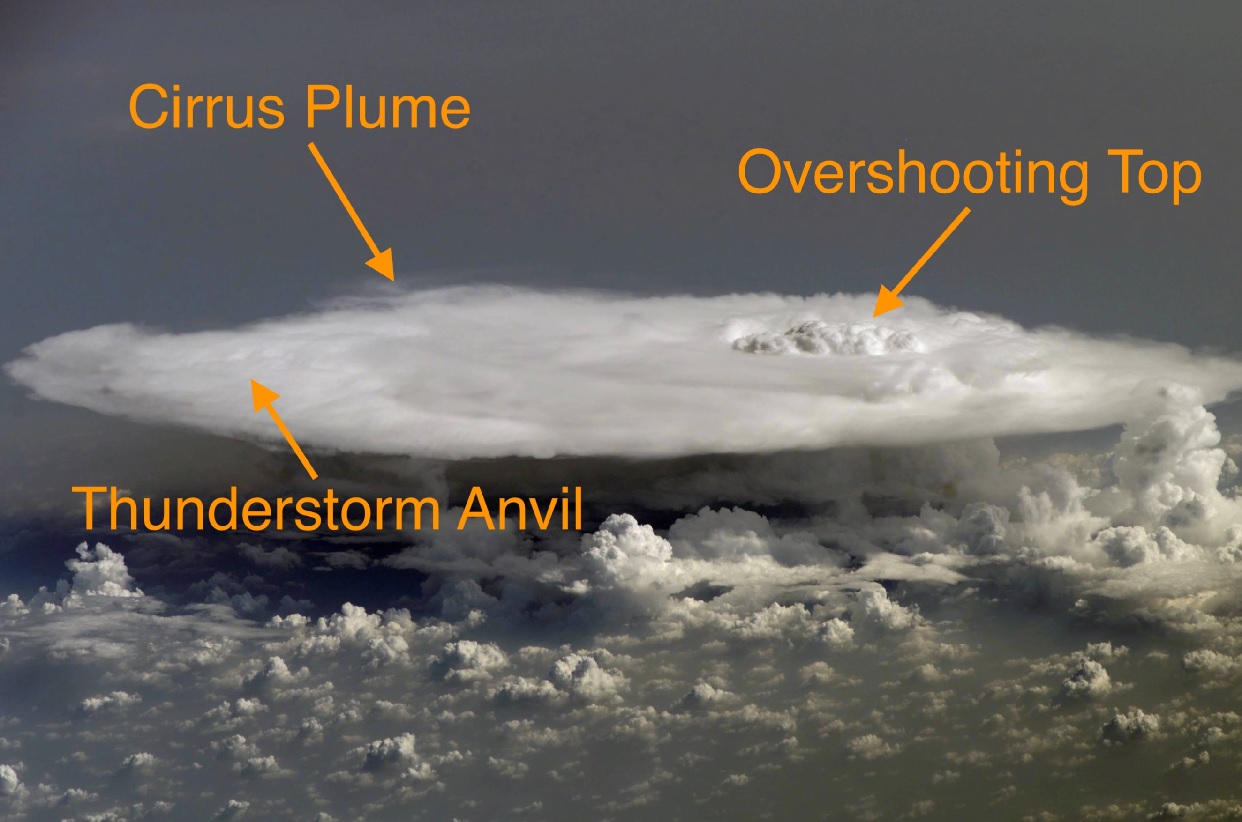 An Overshooting Top continues cooling as it rises into the lower stratosphere, and appears cooler than the surrounding anvil on the satellite imagery. In some cases, an overshoot can produce a cirrus plume, a thin layer of ice cloud in the stratosphere that is blown downwind of the overshooting top and warms to stratospheric temperature.

A new scientific paper led by Dr. Simon Proud, a researcher at the Department of Physics and the National Centre for Earth Observation, has found that a severe thunderstorm has set a new Earth’s low-temperature record. An unprecedentedly cold temperature was measured atop a thunderstorm cloud in the Pacific by the satellite.

On the 29th of December 2018, the VIIRS sensor aboard the American NOAA-20 satellite, overflew a severe thunderstorm in the South Western Pacific, approximately 400 km (300 miles) south of Nauru Island, Micronesia. This thunderstorm was so powerful that it pushed a massive overshooting top into the lower stratosphere.

While it was continuing to cool as it gained height, this overshoot led to the storm’s cloud tops becoming extremely cold.

Apparently, this thunderstorm became the Earth’s record low temperature ever recorded. The lowest temperature reached an unprecedented -111 °C (-168 °F), and the tops of the clouds have reached an altitude of over 20.5 km (12.8 miles) above the sea level (the Pacific Ocean in this case).

Massive thunderstorms in this part of the Pacific are quite frequent during the winter month, especially through December and January timeframe. But this thunderstorm has been something special with an extreme boost to its updraft.

Thunderstorms are mainly fueled by very warm ocean waters in the tropical region, which are often near 30 °C or even higher in some areas. 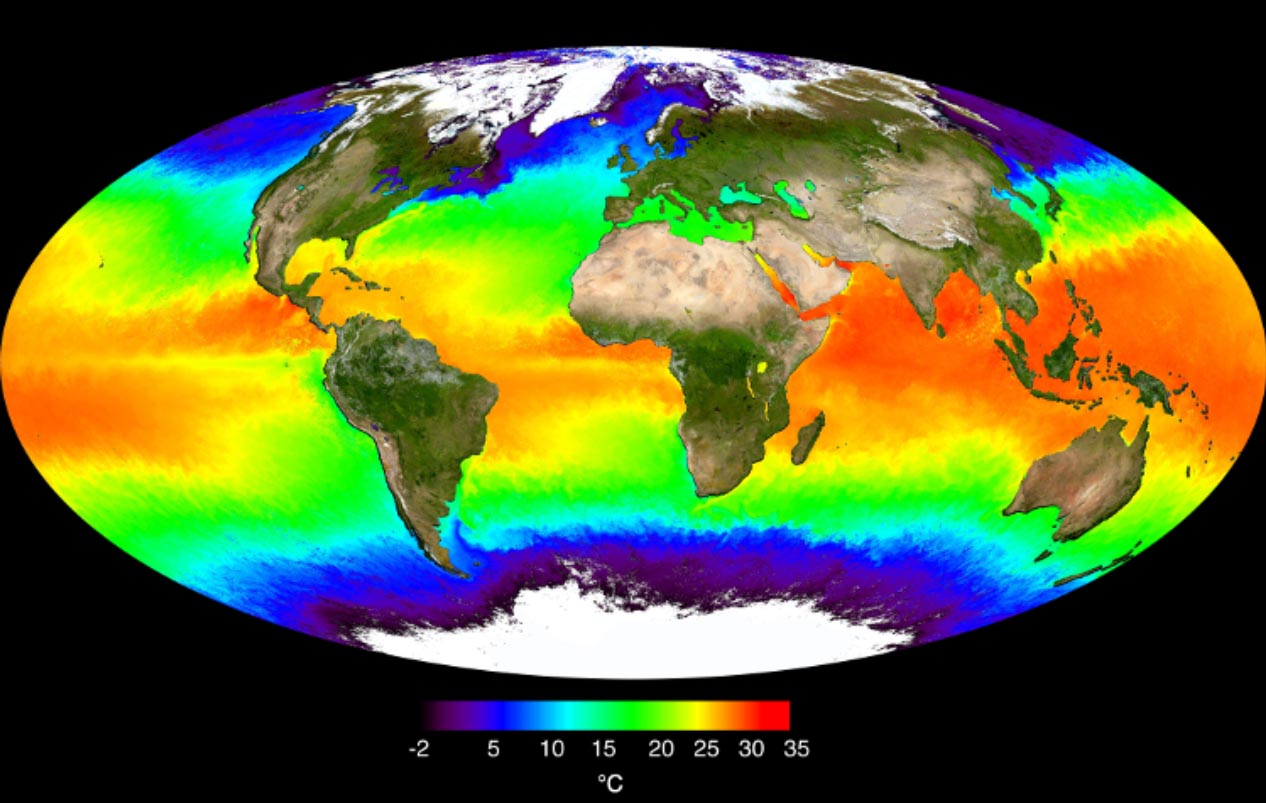 An important influence to support the convective activity is a phenomenon called a Madden-Julian Oscillation (MJO). This is is the largest and most dominant source of short-term tropical variability, it is an eastward-moving wave of thunderstorms, clouds, rain, winds, and pressure. It circles the entire planet on the equator in about 30 to 60 days.

When an MJO wave arrives in a certain part of the tropical region, an increase in thunderstorm activity starts. It is known that a combination of MJO and warm sea waters leads to higher chances of tropical disturbance development.

Research papers have also found that the warming ocean waters could result in an even higher frequency of such extremely deep thunderstorms with below -100 °C cloud tops. Observations show an increase in these storms in recent years.

See more examples of extremely deep thunderstorm clouds from Typhoon Goni at the end of October 2020.

Dr. Simon Proud has also noted that over the last 20 years, it seems these severe thunderstorms with extremely cold cloud tops are becoming more common. Studies have found that the tropopause is actually getting warmer in the tropical Pacific region.

So we might expect to see warmer clouds, not colder clouds, which likely means we’re seeing more extreme storms as we’re getting even bigger overshoots than we used to.

Learn about NOAA-20 and VIIRS

The NOAA-20 is the first of the United States National Oceanic and Atmospheric Administration’s (NOAA) latest generation of U.S. polar-orbiting, non-geosynchronous, environmental satellites called the Joint Polar Satellite System. It also includes the VIIRS instrument which observes and collects global satellite observations that span the visible and infrared wavelengths across land, ocean, and atmosphere. 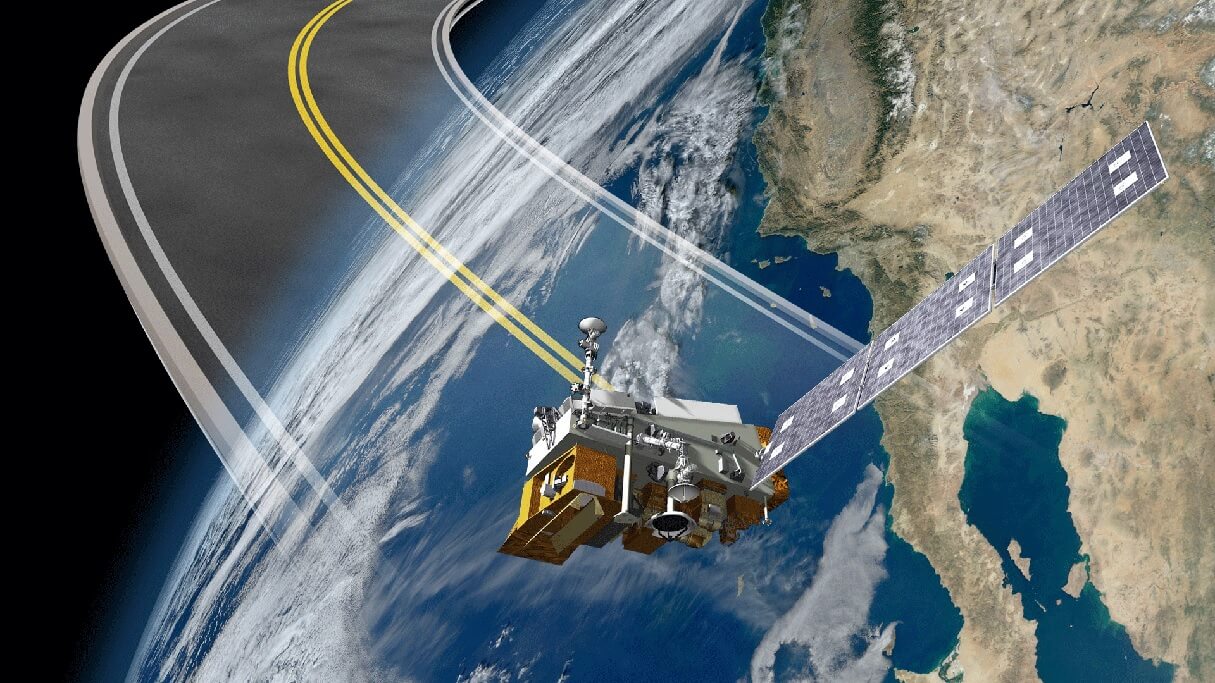 The satellite orbits the Eart at the altitude of 830 km (515 miles), at 1:30 pm mean local solar time. NOAA-20 satellite has a sun-synchronous orbit (SSO) that is a nearly polar orbit around a planet, in which the satellite passes over any given point of the planet’s surface at the same local mean solar time.

It has a repeat cycle of 16 days with its swath dimensions of 3000 km (1864 miles), so nearly global coverage every day.

Arctic Sea Ice reaches its maximum extent, but now the melt season is starting and we could face a strong one, based on the latest forecasts