The Tropical Storm #SEBASTIEN wants to make us silly – while it is now undergoing an extra-tropical transition, it is not expected to dissipate but intensify again in the coming days! This means the threat to western Europe has returned. This system must be one of the most tricky storms to forecast this year; it first had the potential to become a hurricane, no. Then it was expected to become an intense extra-tropical cyclone, but no, it was about to dissipate. Now, when everyone almost gave up on it, it intensifies again and heads for Europe!

Maybe we could use such skill to forecast its future impact? Remember this hilarious story from a few months back?

Joke aside, let’s see the latest model guidance which suggests Sebastien will begin deepening again and intensifying into a strong extra-tropical cyclone moving towards western Europe on Tuesday. It is now increasingly likely to deliver a severe windstorm and major waves into parts of S British Isles and NW France.

Based on the latest Advanced Dvorak Technique (ADT) satellite analysis, Sebastien is packing winds of 45-50 knots and gradually deepening central pressure, currently at 988 mbar. The 34 kt wind radii is extending 80-120 miles away from the center, so a rather broad wind field. Sebastien is now becoming a fully extra-tropical cyclone – all of its deep convection is located in a band to the north of the center and it is co-located with an upper-level shortwave trough. 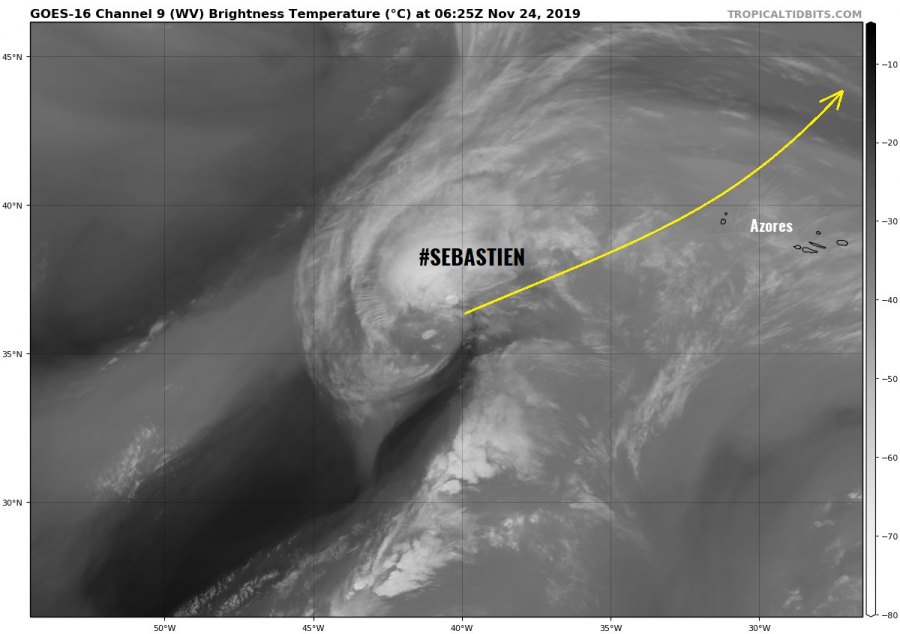 Although both GFS and ECMWF models indicate that the cyclone will develop a deep cold-core low today, some models actually suggest the system could maintain its warm-core and therefore being a warm seclusion type of extra-tropical cyclone, similar as it has happened with ex-hurricane Ophelia in 2017. Nevertheless, Sebastien is now being affected by around 40 knots of deep-layer shear and cool sea surface waters of around 20 °C and will behave as an extra-tropical system today. Sebastien is forecast to only gradually lose its strength over the next 48 hours and is expected to deliver gusty winds and heavy rains over the Azores tonight while rapidly crossing nearby to their north. 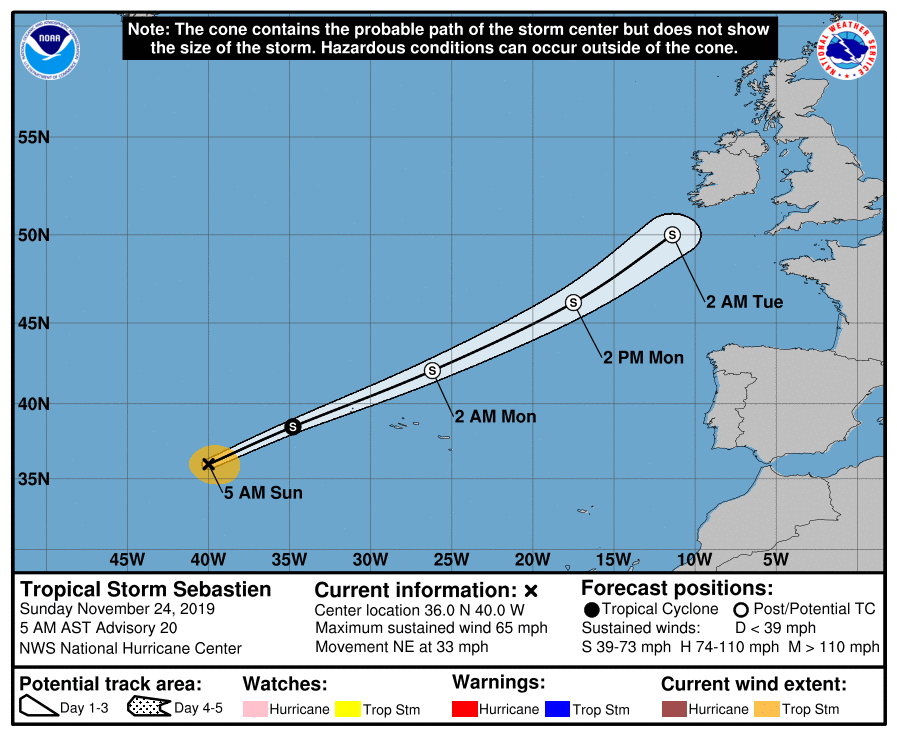 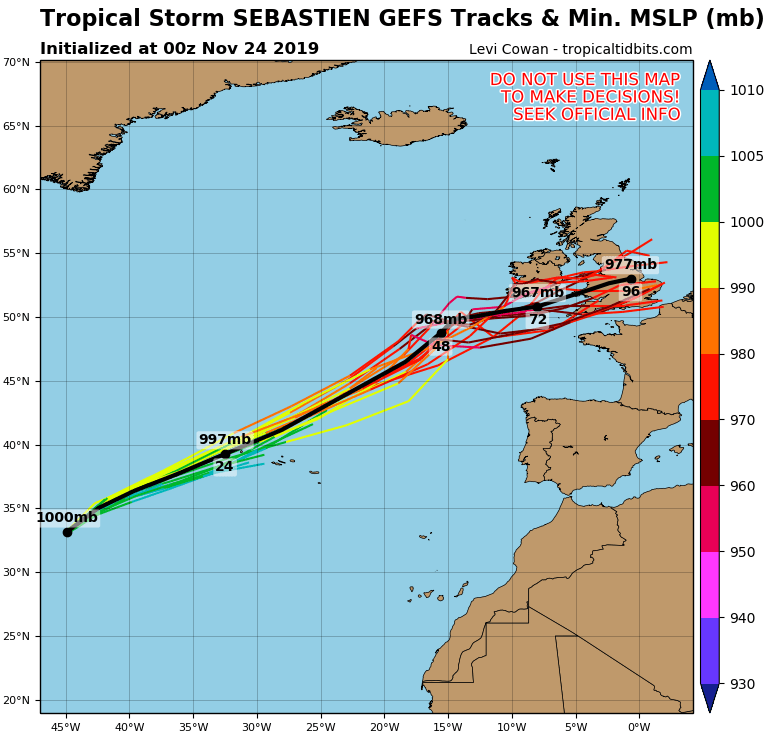 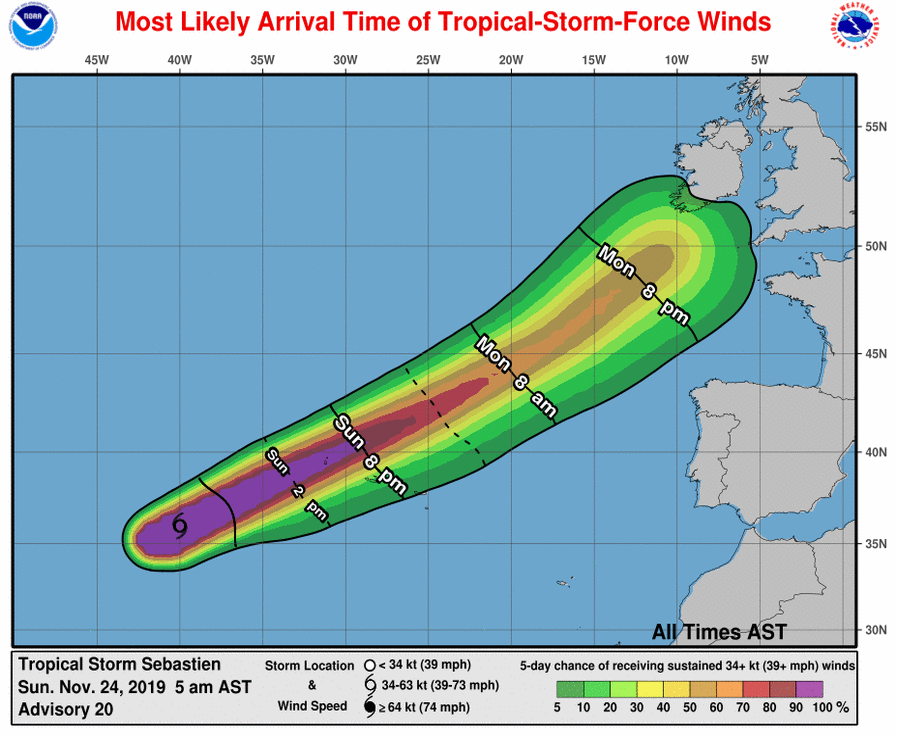 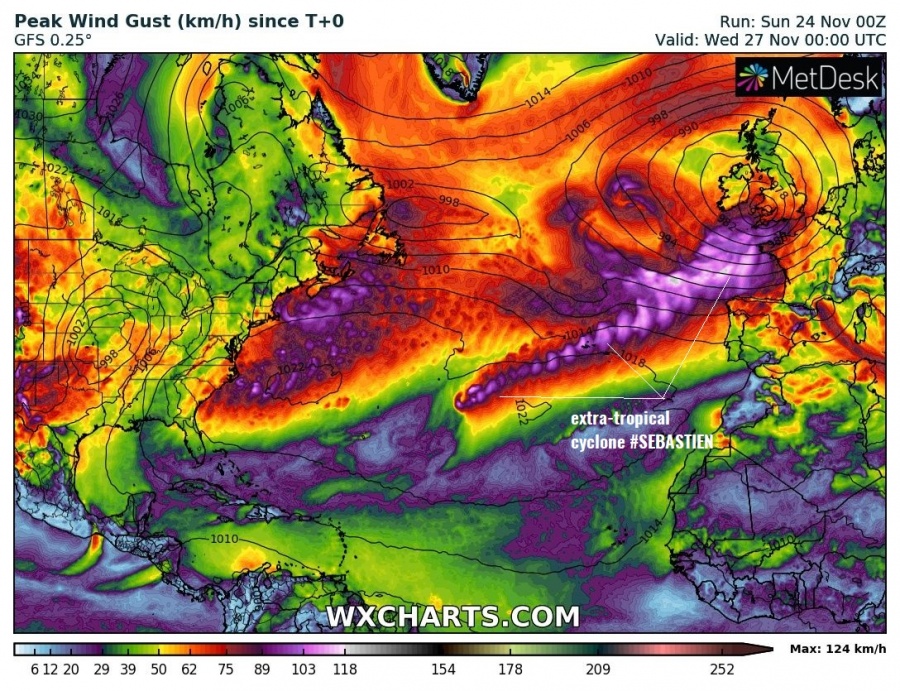 After tomorrow, Sebastien is expected to merge with another large system located SW of the British Isles and Ireland. This larger complex system will then bring gusty winds and heavy rains into parts of western Europe (N Iberia, W France, S British Isles – England / English Channel) within the next few days. Attached is the side-by-side wind gusts forecast by ARPEGE and ICON-EU models. Notice how the forecast of cyclone’s track becomes unclear on Tuesday – ICON-EU model curves the cyclone towards Ireland while ARPEGE pushes it directly towards the English Channel. 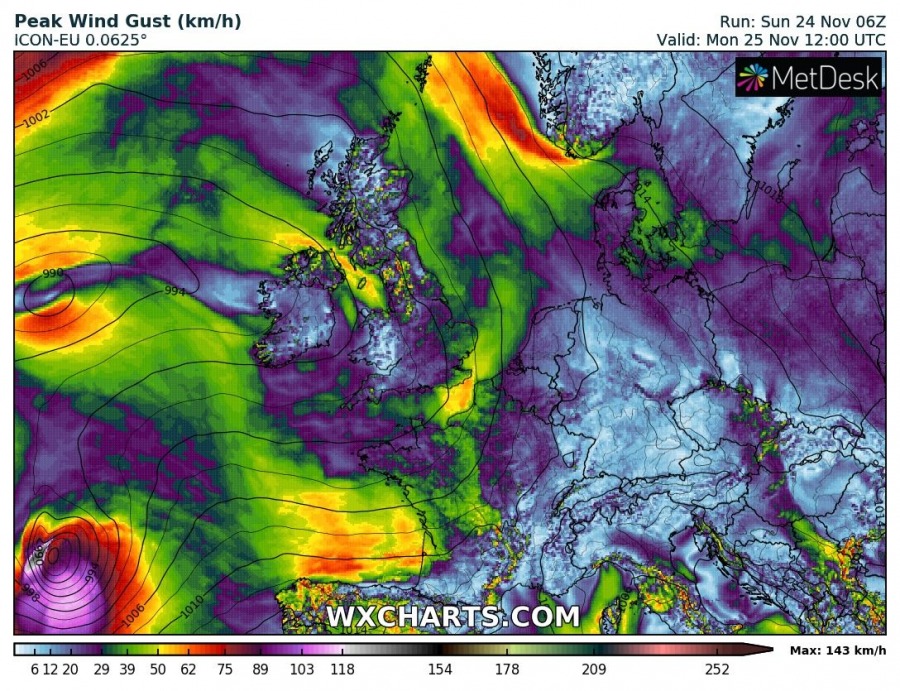 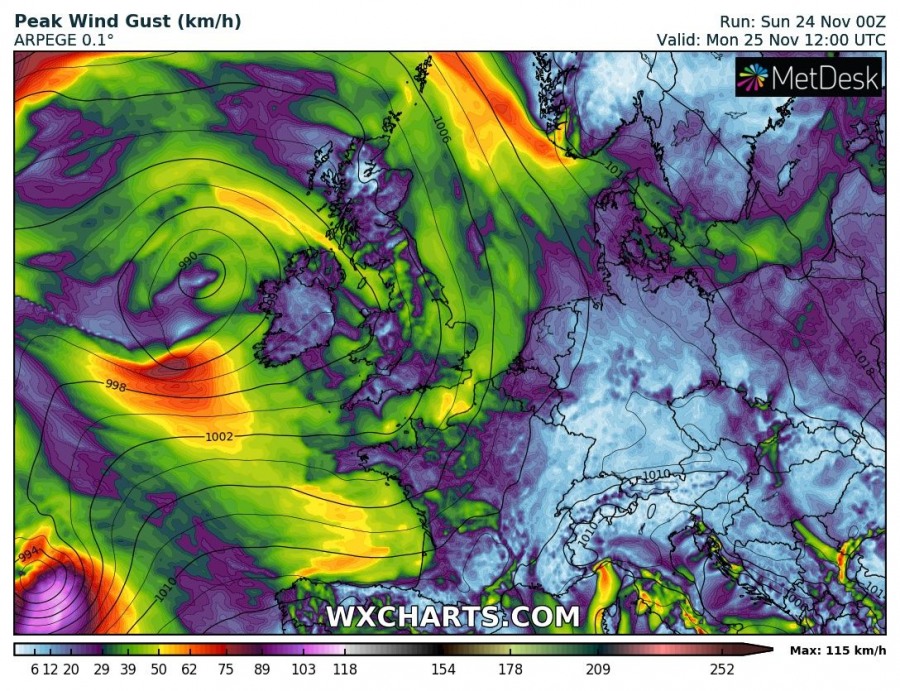 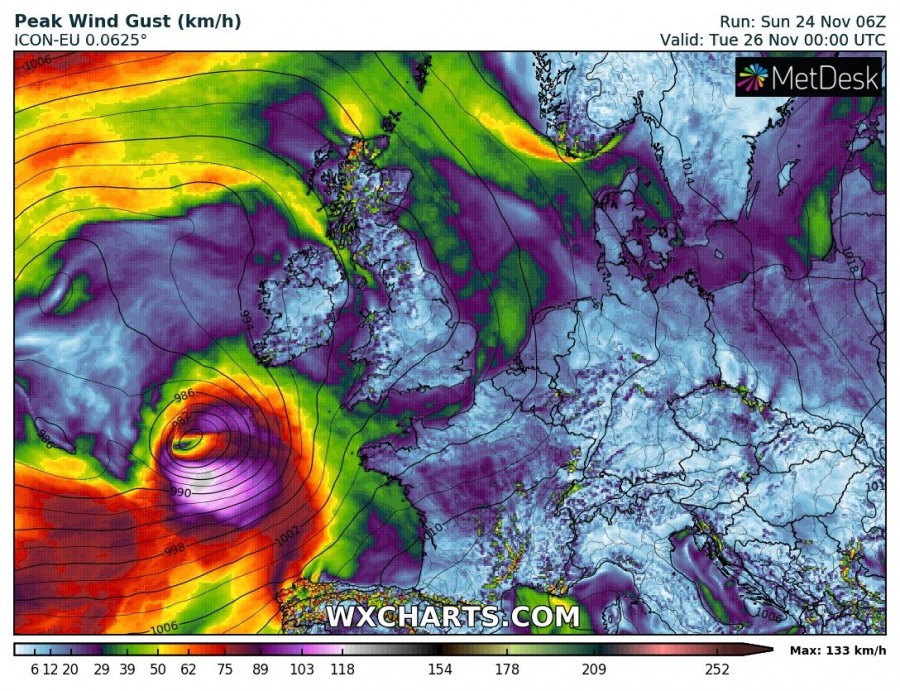 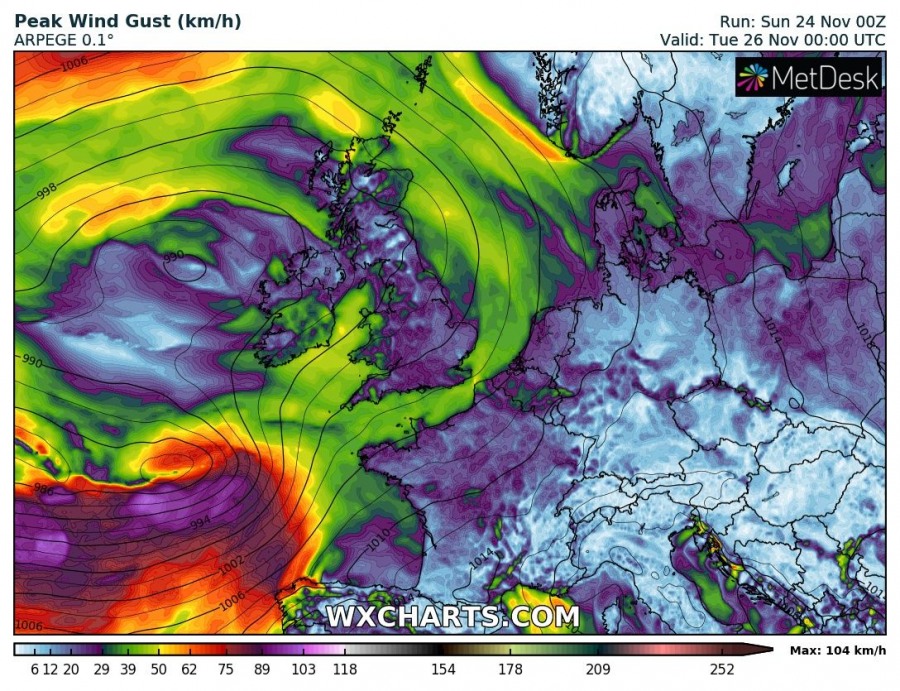 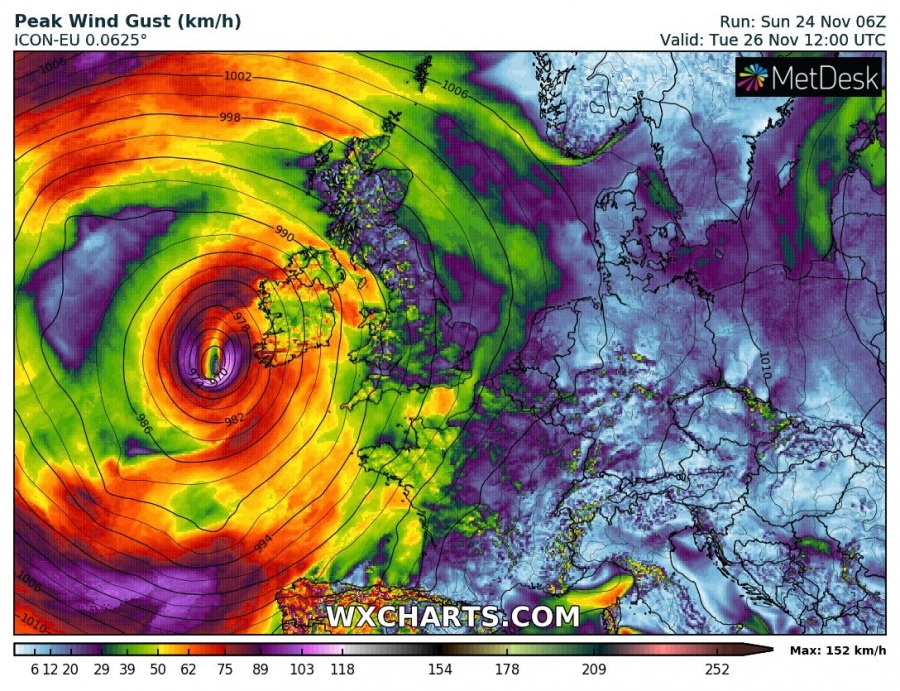 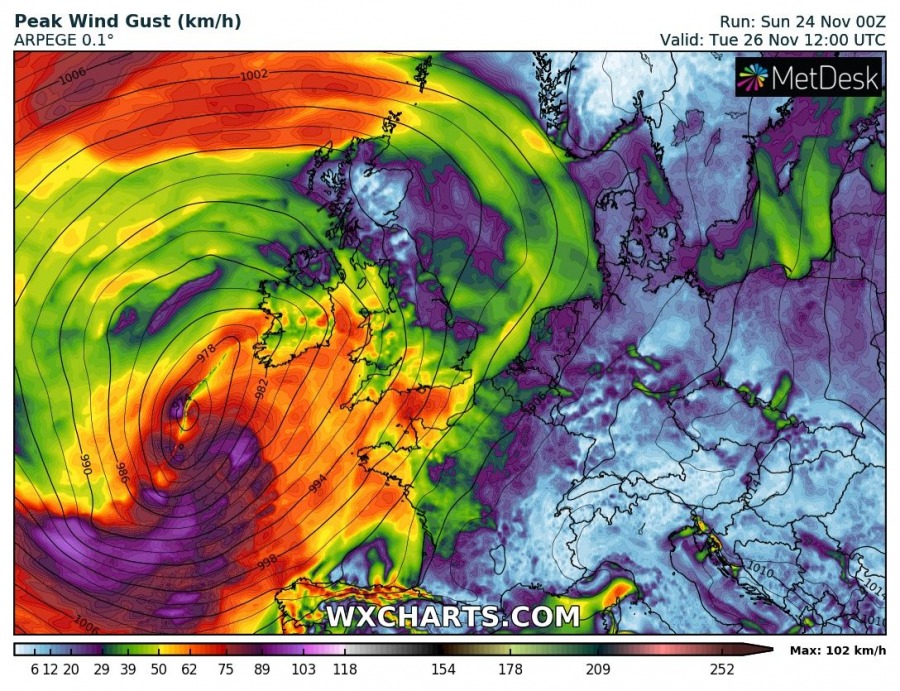 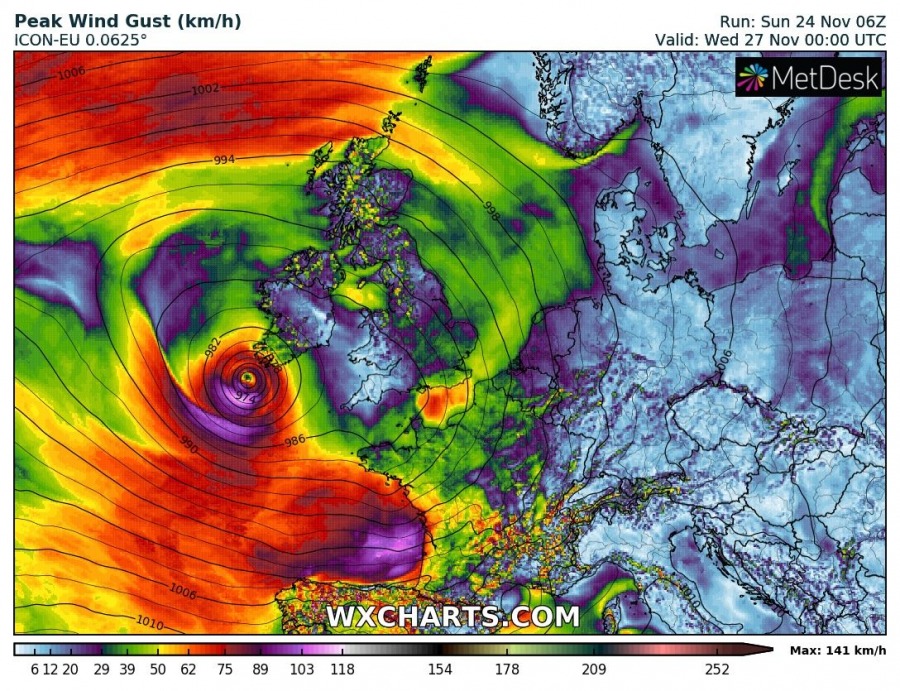 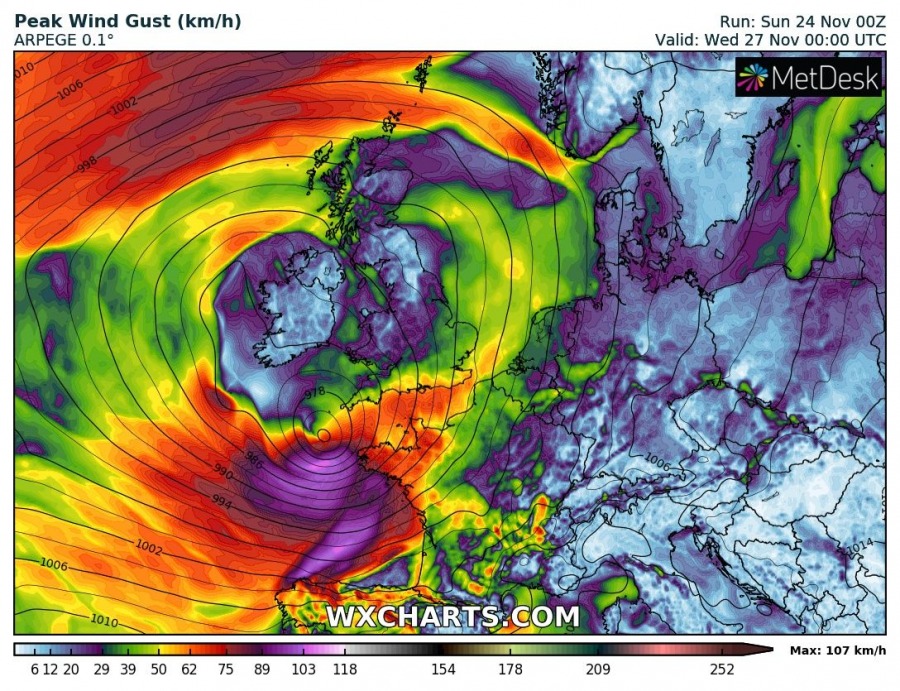 Peak wind gusts per ICON-EU, ARPEGE and GFS forecast models indicate severe winds are expected across the Bay of Biscay and coastal areas of Iberia, W France and S British Isles, however, due to still some uncertainties regarding the exact track of cyclones, it is unclear where the strongest winds will occur. Severe winds might also spread into S Ireland if cyclone takes the ICON-EU forecast track. 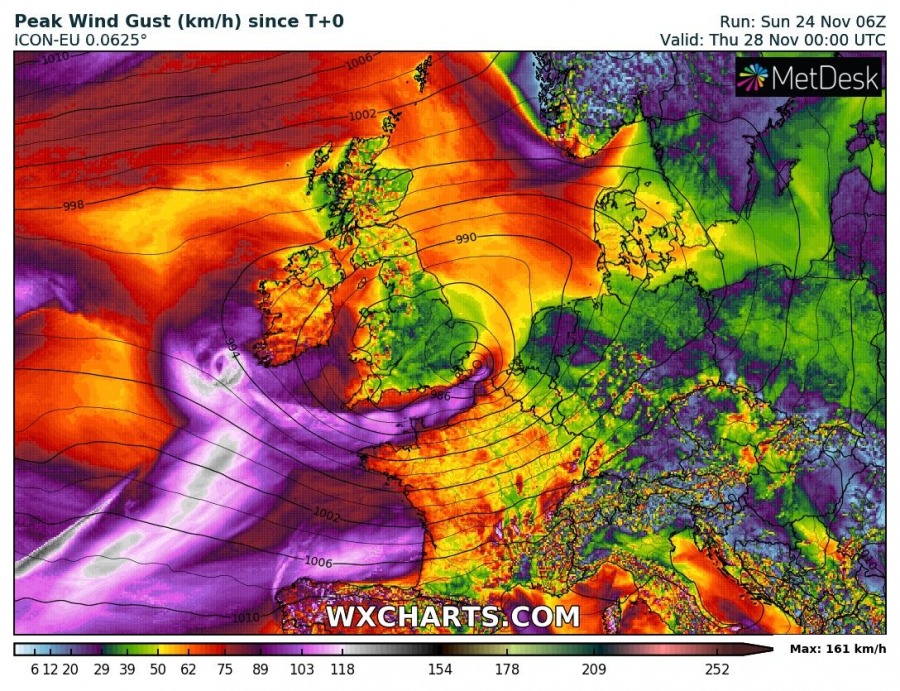 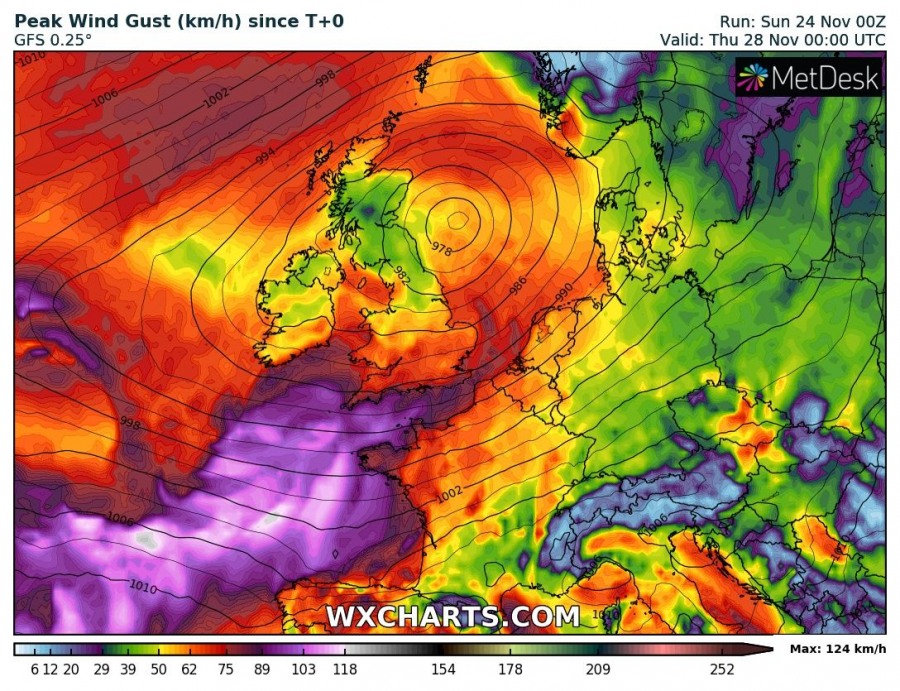 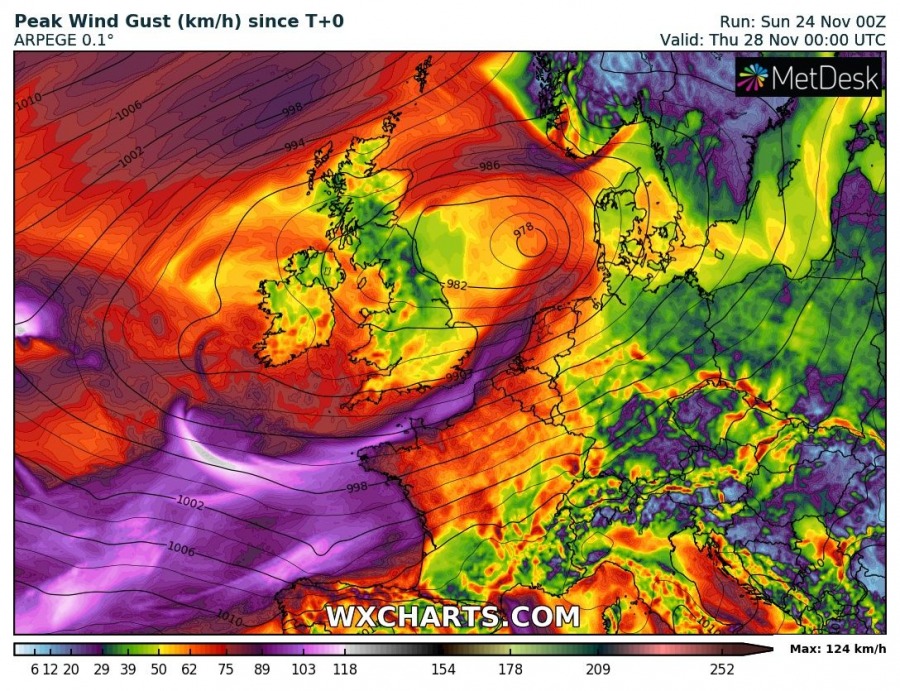 Major waves are also expected, generated by the broad wind field, mostly over the Bay of Biscay towards France. The highest waves will be around 10 meters over the open waters while 7-8 meters wave heights could occur along with the French WNW coastal areas. 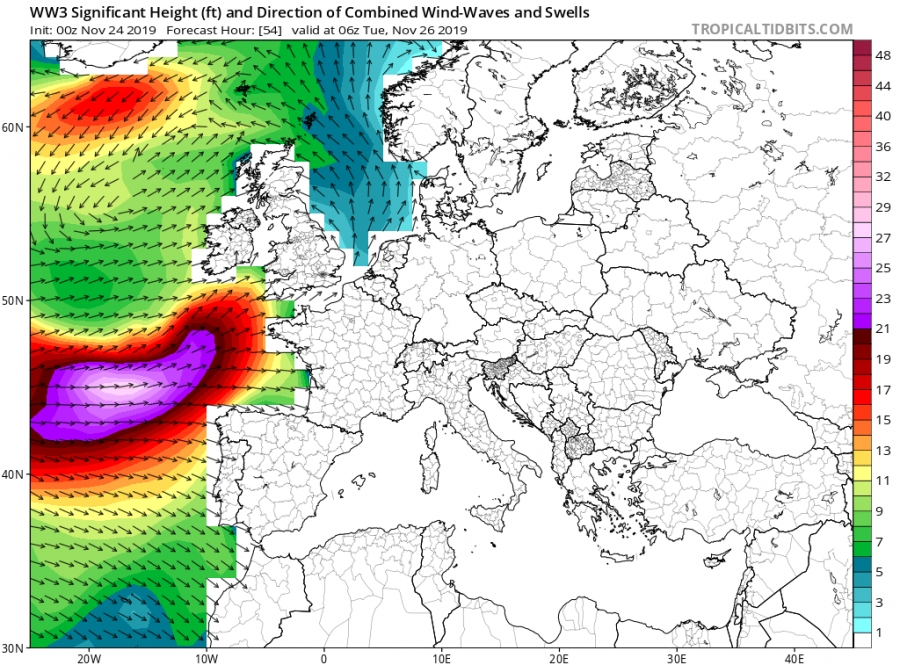 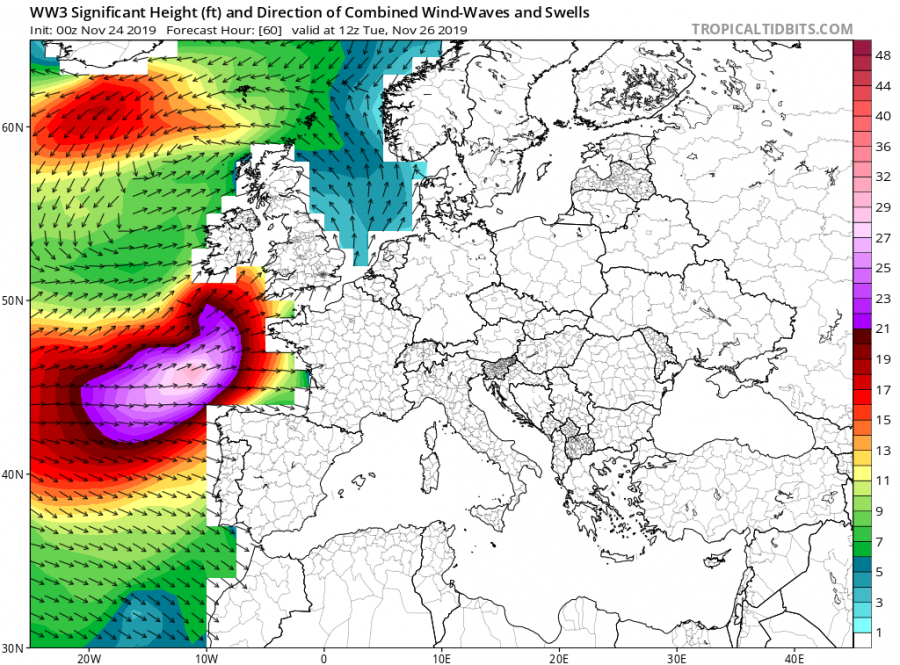 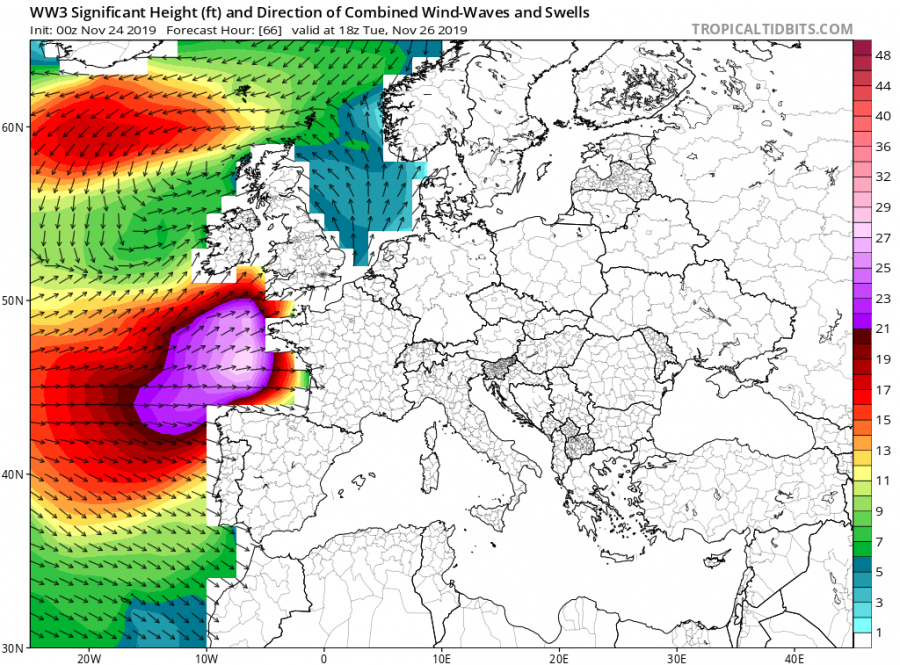 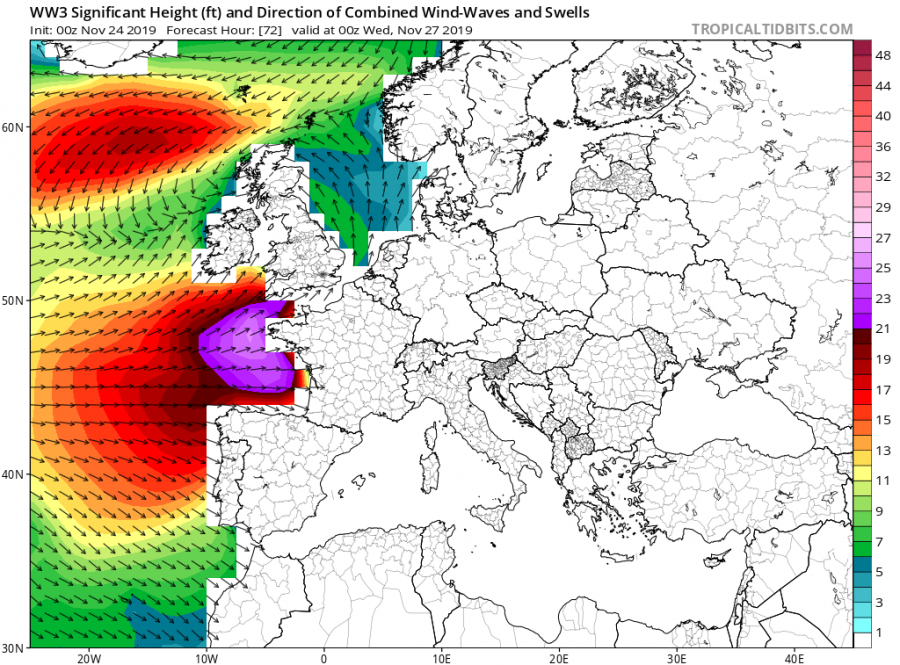 Tropical Storm #SEBASTIEN changed his minds – already accelerating and weakening, expected to dissipate on Monday and will not be a threat for Europe anymore