Tropical Cyclone #Harold has done an unprecedented intensification into a powerful monster tropical system. It is packing 120 knots (140 mph / 225 km/h) maximum sustained winds and 936 mbar (914 mbar per Vanuatu Met. office) central pressure. This officially puts Harold into a Category 5 system, based on the Australian/Fiji classification. That is a Category 4 equivalent tropical system based on the Saffir-Simpson scale. Harold is already affecting the westernmost islands Espiritu Santo and Malakula, and continue due east at slow speed. This will be destructive for the archipelago over the next 24-36 hours as Harold’s very slow movement across the islands will result in significant wind damage and flooding.

The satellite imagery is beyond exceptional. Soon after Harold completed the EWRC (Eyewall replacement cycle), a very large eye appeared with a fully closed eyewall and almost symmetrical CDO (Central dense overcast) cloud signature. A truly remarkable monster system. This is the worst-case scenario for the Vanuatu islands, as there is basically no return now. The full force of a violent system will blast across the country. Also, a very interesting thing happened a few hours ago – it seems that Harold’s eye began to clear soon after the outflow ‘shockwave’ pushed to the N and NW. This shockwave can be seen on 3rd animation below: 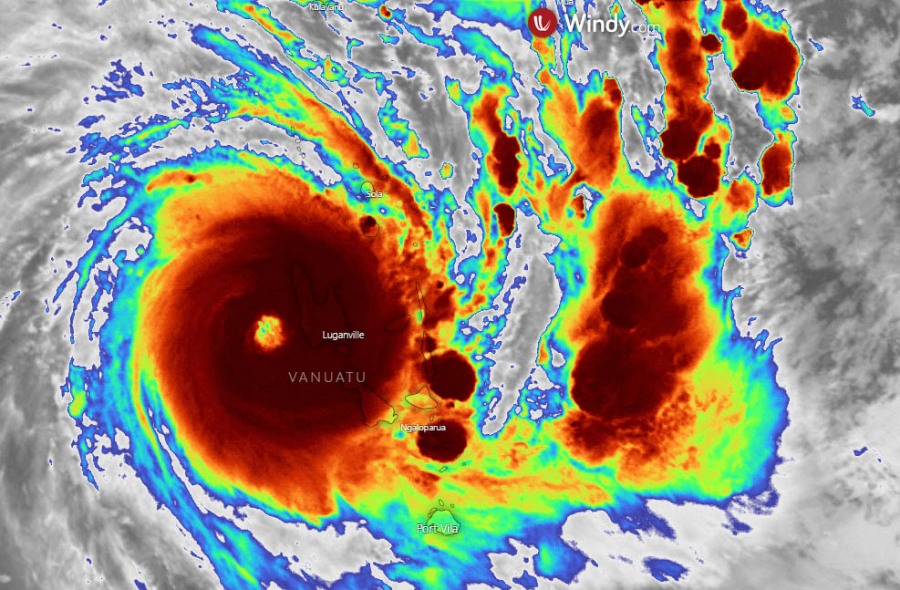 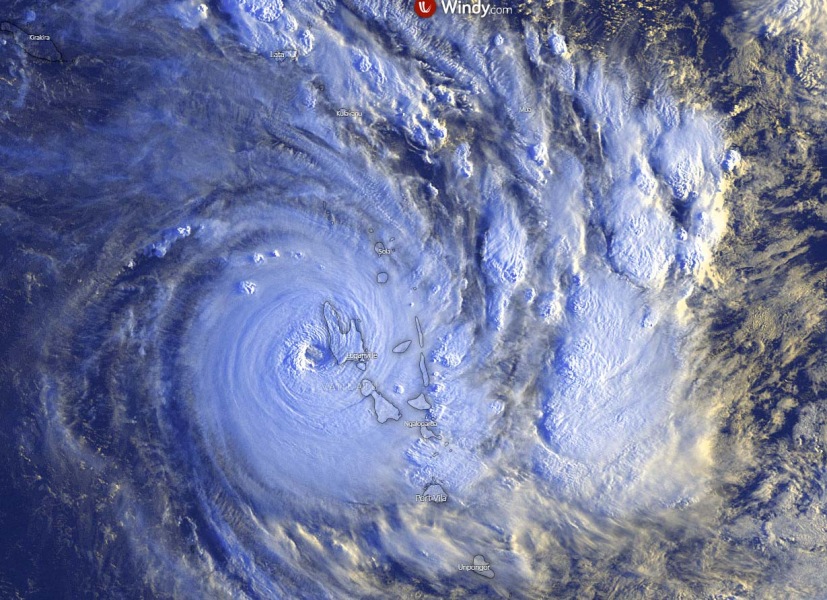 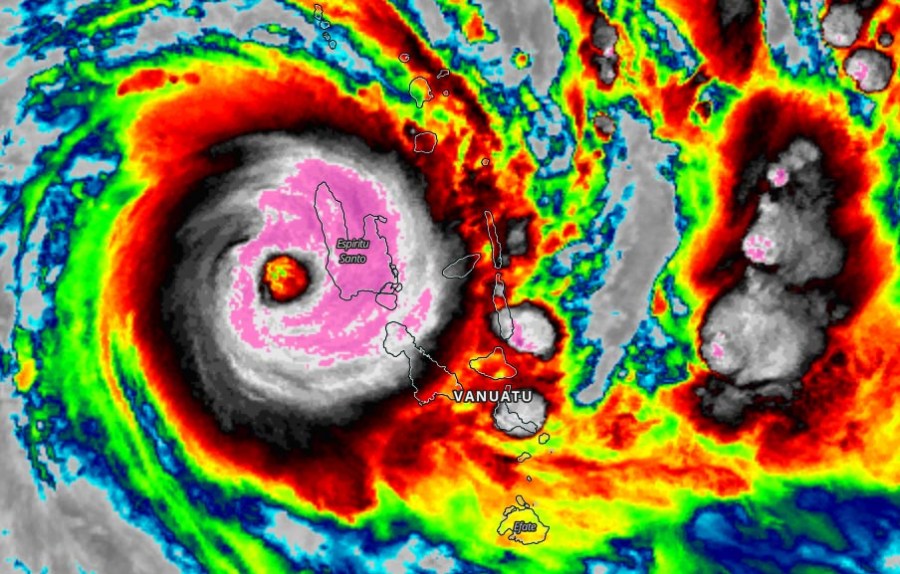 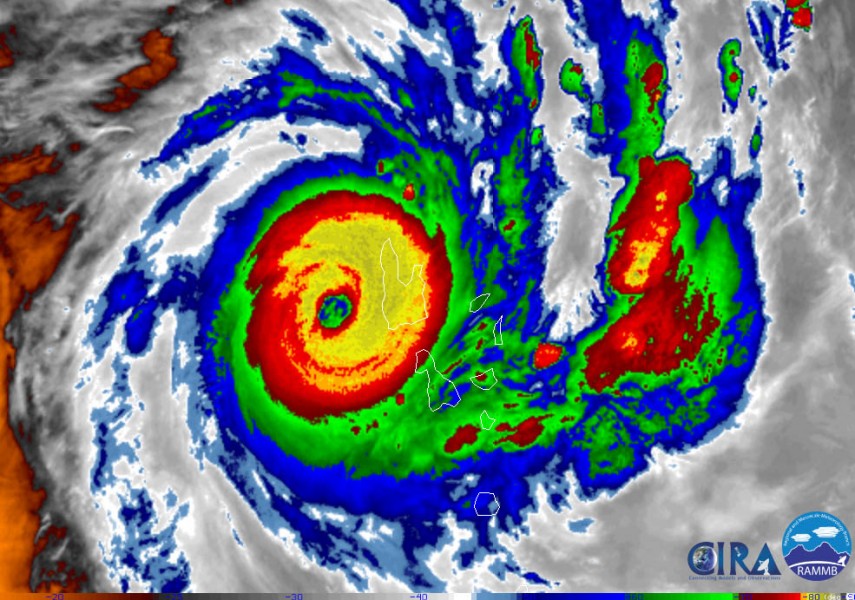 🌀Severe Tropical Cyclone #Harold has quickly intensified for the second time and is the equivalent of a Category 4 hurricane as it heads into #Vanuatu pic.twitter.com/4yv7XfWY9r

Bad news for #Vanuatu as Cyclone #Harold is intensifying upon approach.

CIMSS ADT estimates Harold is near Category 4 strength with a clearing eye surrounded by a ring of deep convection. #tropics 🌀🌀🌀 pic.twitter.com/DM4nq85fRk

Advanced Dvorak Technique (ADT) estimates suggest the strength of Harold is relatively stable at 130 knots lately, with the minimum central pressure near 930 mbar. A volatile environment can also be seen as Harold’s intensity was changing from strong Category 3 to 5, back to 4 and again exploded into a Category 5, due to an EWRC. Soon after 12 UTC (Apr 5th), EWRC was completed and Harold has built up a very large eye, surrounded by intense 115-130 knots eyewall winds. It is holding the final T number around 6.5 – approx. 130 knots for the past several hours. The 50-knot wind radii are extending 60-70 miles around the center, covering the whole island Espiritu Santo and already the northern parts of Malakula island. Destructive, hurricane-force 64-knot winds, are grazing across the 30-40 miles radii around the center, already affecting the western part of Espiritu Santo island. 34-knot wind radii are more than 120 miles wide!

Based on the JTWC 12 UTC analysis, Harold had 120 knots of maximum sustained winds and central pressure 936 mbar. This might be slightly underestimated. The Vanuatu meteorological service is giving an official Category 5 strength of Harold, with 914 mbar minimum central pressure. The most likely track will bring Harold between the islands Espiritu Santo and Malakula first, then it will continue east and likely cross between the islands Pentecost and Ambrym. Nevertheless, Harold is a very large system and its powerful wind force is so huge, all these islands will be significantly affected by destructive winds. The most intense winds are indeed where the inner eyewall will travel, approx. 30-50 miles around the cyclone’s center. Once Harold ejects of Vanuatu on Tuesday, it will continue towards the southeast and could pass over the southern part of the Fiji archipelago. But the exact track will be better defined after Harold finishes its interaction with Vanuatu – stay tuned! 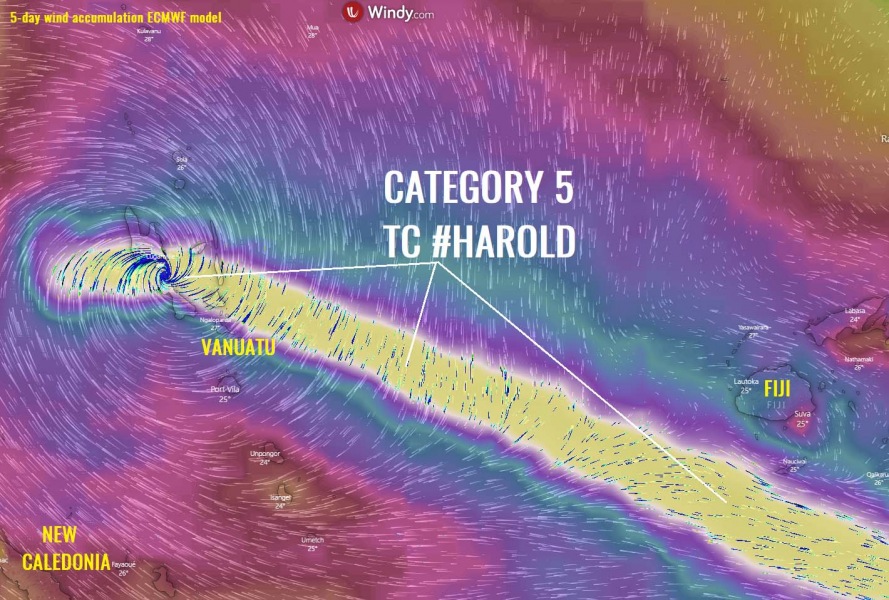 This tropical cyclone will be destructive for Vanuatu islands, wherever its eye passes. Violent winds of 120-130 knots sustained speeds will be devastating in some areas. Together with very intense rainfall and destructive flash floods, including landslides. Stay alert for life-threatening conditions! We will be updating again soon – stay tuned!