A major pattern change is coming up for the United States this week. After a very warm early April, a strong intrusion of Arctic cold air mass is scheduled to arrive on Monday and spread south in the days after. Spring snow will develop across Dakotas and the High Plains, including Denver and Cheyenne again. The cold period is likely to extend into next week, shutting down the severe weather potential.

The last few weeks have been quite warm with mild spring weather across the U.S. Actually, several cities across the upper Midwest and the Great Plains have had a very warm start of spring, e.g. the International Falls, Minnesota. Or for example, the city of Bismarck in North Dakota experienced a very warm spring day on Apr 3rd. The temperature hit a remarkable warmth of 83 °F, which is, for early April, quite impressive this far north.

But now a significant pattern change is coming up. Snow will develop across Dakotas, Rockies, and the High Plains, with very cold weather lasting for at least a week. The cold pool will be strong enough to spread as far south as Texas.

The event is related to the historic cold which hit Alaska this weekend. As we discussed a few days ago, an Arctic cold blasted into Alaska with exceptionally low temperatures, record-setting values in many areas. This was an unusually cold and is now forecast to turn towards the Contiguous United States this week.

Now, as we have more model data available, it seems the north and central parts of the country are ahead of a very cold period through mid-April, with also quite some spring snow expected across Dakotas and the Rockies. It might not be extremely or record cold, but temperatures will be significantly lower for many. With frosty mornings.

The general pattern across North America actually continues being in a progressive mode, so it is not surprising at all that the deep upper wave over Alaska and Yukon, Canada could continue further east towards southern Canada and also the United States after it ejects off the Pacific Northwest.

The Arctic cold has left some historic temperature records over Alaska, and now this cold weather, locally even very cold, with snow returns to the part of the United States this coming week. It is likely to extend throughout the whole week and also shut down any severe thunderstorm potential across the Tornado Alley as warm/moist air mass will be flushed back to the deep South and the Gulf.

The reason behind the event was an unusually intense pool of Arctic cold air mass over the Arctic Ocean that spread across Interior Alaska last week and began vanishing on Saturday. Numerous official weather stations have set their all-time temperature records. For example, there were two record low temperatures in the upper Tanana valley on Saturday.

Northway’s low temperature reached -33 °F and set a new record after its previous record of -32 °F in April 1986. At Tok, the low temperature of -36 °F broke the 1986 record of -18 °F. At both locations, this is also the latest in the season with a temperature in the 30s below zero Fahrenheit. Many other station’s temperatures were record-breaking as well.

To understand how unseasonably cold the Arctic cold blast over Alaska it was, is best sampled with the weather balloon measurements above Fairbanks NWS Office on Friday, Apr 9th. The actual measurement at the standard geopotential height of 850 mbar was an unpreceded -32.9 °C, which is the coldest on record for any April upper air soundings at Fairbanks airport.

This has smashed the previous record of -29.6 °C set more than 60 years ago, in 1959. So these values might not be that unusual during the winter months, but getting these in the spring month is beyond exceptional.

Such windchill temperatures are very extreme and could be life-threatening in minutes if one is caught outside unprotected with warm clothing.

A SIGNIFICANT COLD SPREADS ACROSS THE PLAINS

Now, the general pattern across the North American continent this week is building a textbook Rex blocking pattern, meaning we have a strong upper High over Canada with upper lows/troughs further south. As we can see from the 500 mbar chart below, the pattern through the mid-week reveals an upper low placed across the western portions of the Contiguous United States. 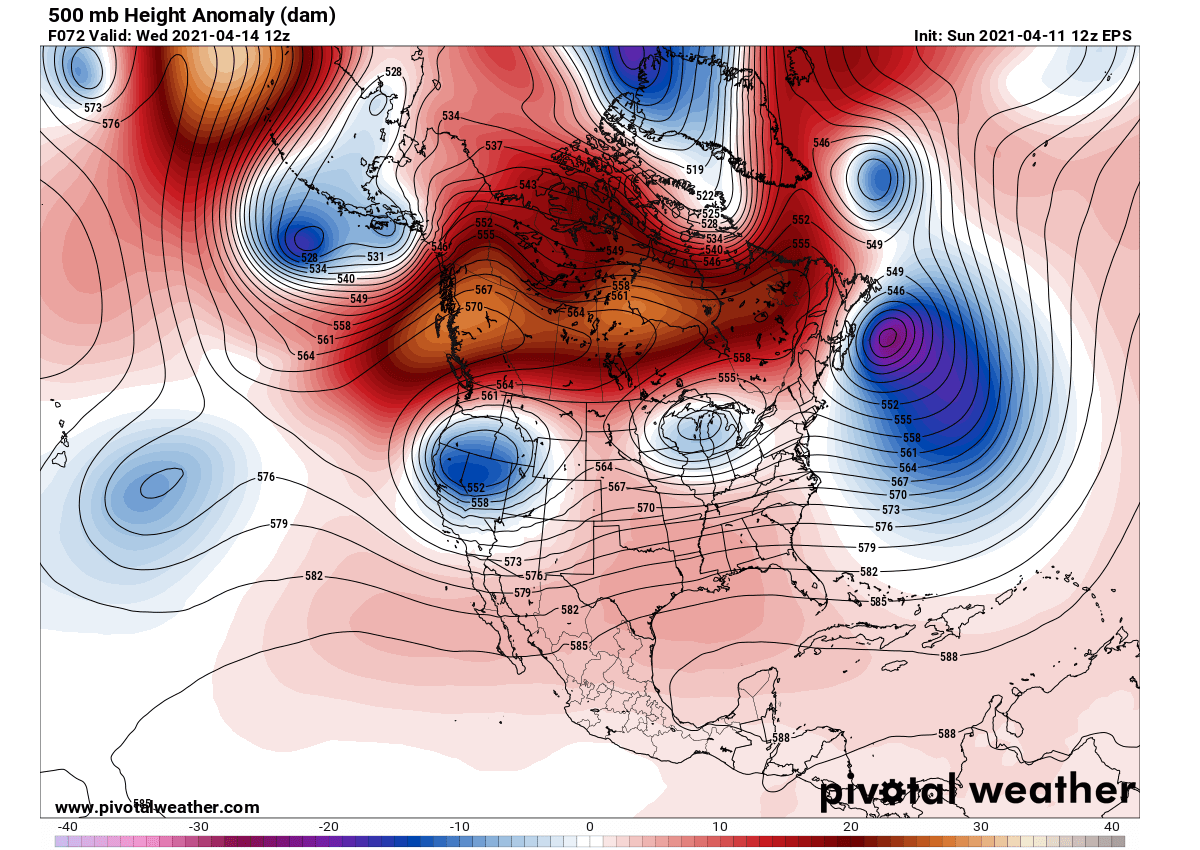 As the related surface high-pressure system expands also into western Canada and the Pacific Northwest, this will allow a much colder air mass to spread far south into the Great Plains and the Rocky mountains in the coming days. Being the strongest across the Northern (High) Plains and the Midwest from Tuesday through Thursday.

Through mid-week, morning temperatures will be low enough to develop widespread freezing conditions, so damaging frost is very likely to occur.

Model guidance suggests that daytime temperatures are forecast to stay in the 40s across the Northern Plains and High Plains, roughly north of eastern Colorado, western Kansas, and Nebraska. With even below the 40s across parts of the Rockies. It will also be quite cold farther south across the Texas Panhandle and Oklahoma, probably in the 50s only during the day.

Looking further ahead towards the weekend and after mid-April, the weather pattern remains quite similar to the coming days. This means that it is quite likely that this cold period could potentially extend well into the next week as well. 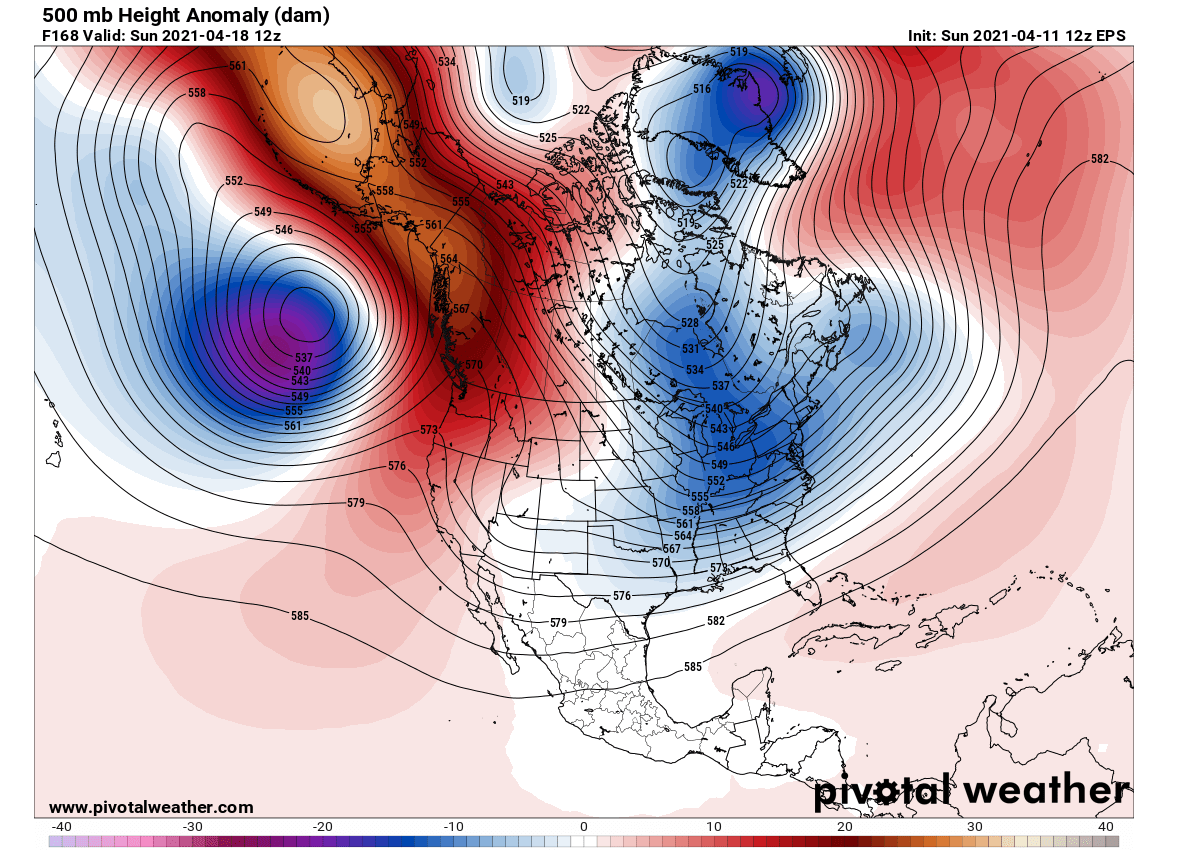 The pattern forecast for the weekend seems to establish a pronounced meridional northerly flow across the Great Plains, so maintaining and additionally support the cold to become more widespread and push farther south. Thanks to the large long-wave trough developing across the eastern U.S.

But probably the most important fact is that the much colder temperatures should actually spread farther south into Texas as well. The cold pool will grow quite big and spread across most of the central CONUS, which will allow the cold to stay for longer.

Attached below is the NOAA’s Climate Prediction Center temperature outlook for the 6-10 day period, indicating the period will very likely be much colder than normal for the southern half of the United States. At some point, this is good to reduce and completely shut down the severe weather and thunderstorm potential, for now.

As we can see, there will be temperatures below normal across about two-thirds of the country. Only the West Coast will likely be warmer than normal after mid this week.

SPRING SNOW FOR DAKOTAS AND THE ROCKIES THIS WEEK

Arriving with the Arctic cold blast from the north, also the snow develops. Note that we use the wording ‘Arctic cold‘ mainly as the origin of the air mass is pure Arctic region. Remember the trajectory of it came from the Arctic Ocean into Alaska and Yukon before turning towards the central parts of North America.

The general pattern evolving into a Rex blocking, with the upper low over the West of the U.S., will help to advect some moisture towards the Rockies and the Northern Plains, as well as into southern Canada. So it will develop snow, even heavy snowfall across the north.

It appears likely that some snow accumulations will actually be possible in the coming days, especially across the High Plains or the eastern Rockies, over Wyoming, western Nebraska, western South Dakota. Potentially also into west-northwestern Kansas and east-central Colorado. Both Denver and Cheyenne will see some new snow again this week.

Much more snow seems likely to develop from northeast Montana into North Dakota, northern Minnesota, and southern Canada (Manitoba and Saskatchewan). There, 10-15 inches of snow seems likely, while winds will create poor visibility with blowing snow.

Based on the available model guidance the amount of snow will not be particularly significant, but some accumulations are likely at least in the mentioned states and areas.

***The images used in this article were provided by NOAA, Pivotalweather, and Windy.