Major hurricane Florence remains a very dangerous weather system and is on track with previous forecasts. It will be devastating for the coastal North Carolina. Florence has gone through some fluctuations in intensity in the past 6 hours and has now slightly weakened, but is still a strong Category 3 storm. However, the hurricane and tropical storm wind field has expanded, so it remains a very intense and large hurricane 36 hours prior to landfall in North Carolina tomorrow.

Last minutes of daylight over Florence today, and the eye is now filled with cirrus clouds while its whole structure remains quite symmetric and impressive. The hurricane could still improve its shape and strengthen back to a Category 4 storm within the next 18-24 hours as conditions remain favorable. 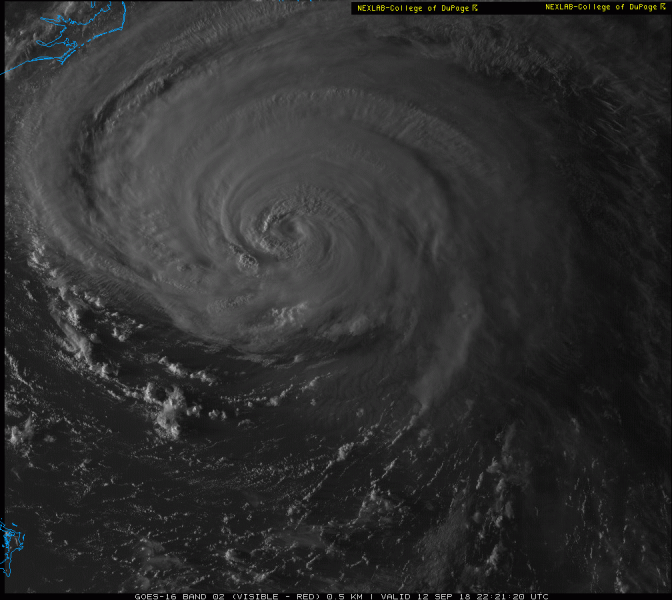 The latest 12/18z model guidance suggests Florence’s landfall near Wilmington, North Carolina late tomorrow afternoon. Florence will then turn more westerly and slow down, so extreme danger for major flooding due to excessive rainfall is increasingly likely. The hurricane will be moving towards northeastern South Carolina. National Hurricane Center graphics reflect this model guidance and give good confidence in the future 48-hour path of Florence. 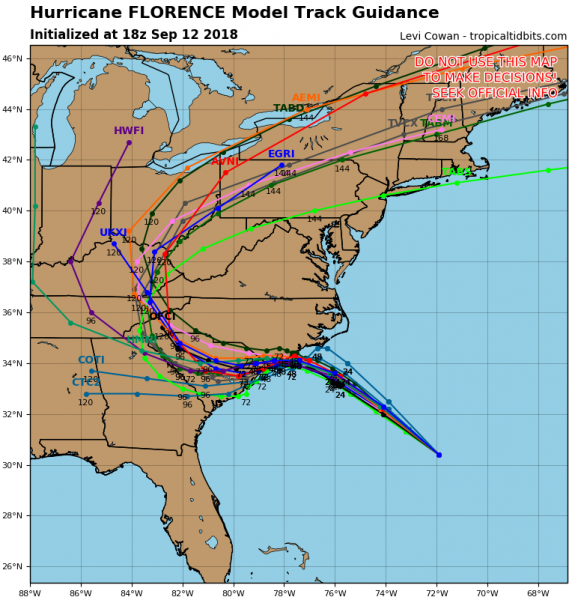 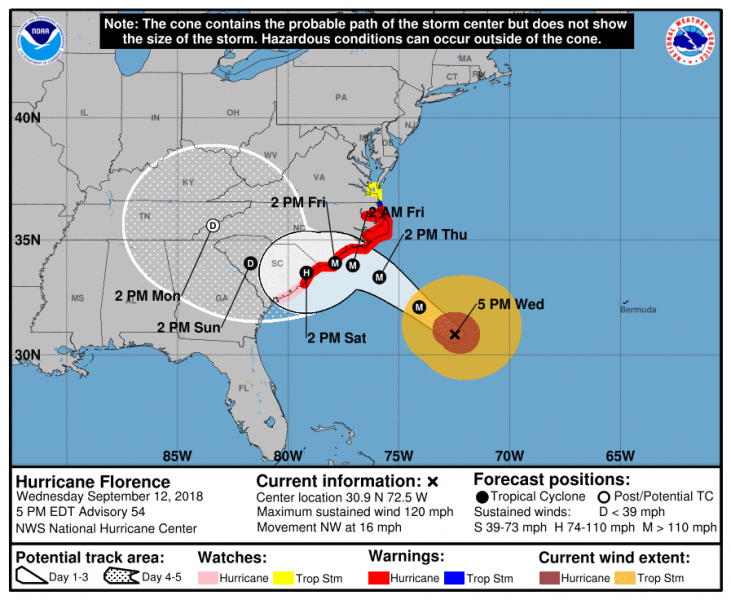 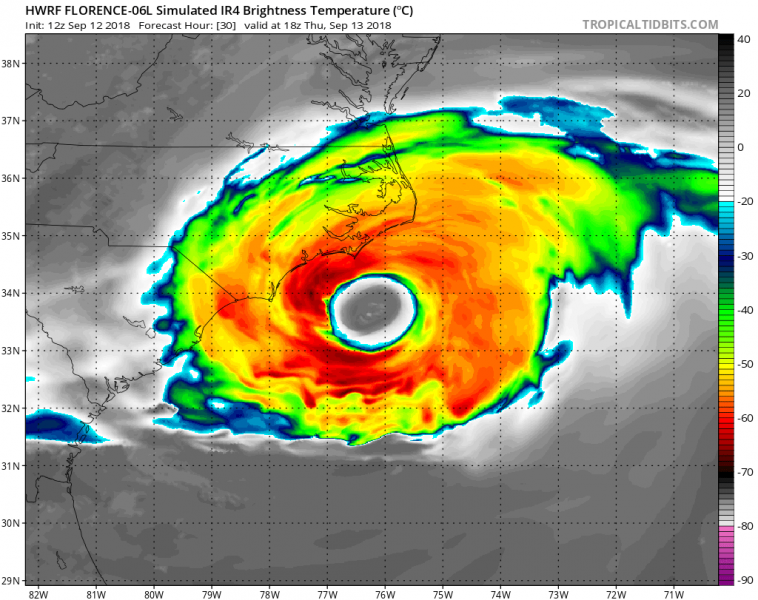 Data from an Air Force Reserve hurricane hunter aircraft along with satellite imagery and various intensity estimates indicate that Florence has weakened instead of strengthening. However, while the hurricane hasn’t strengthened in terms of peak winds, the inner-core and outer wind fields have continued to expand, resulting in an increase the cyclone’s total energy, which will create a significant storm surge event. The upper-level outflow remains impressive and is still expanding except toward the south.

Florence is moving toward the northwest or 315/14 kt. The new 12Z global and regional model runs have come into much better agreement on Florence moving steadily northwestward around a strong ridge located between Bermuda and the U.S. mid-Atlantic region for the next 48 hours or so. By late on day 2, Florence is forecast to approach the southern portion of the North Carolina coast, then slow down considerably and turn westward within collapsing steering flow, with a very slow westward motion near the coasts of North and South Carolina continuing into Friday and Saturday. Corrected-consensus models HCCA and FSSE remain very close to each other and are quite similar to the simple consensus model TVCA. Therefore, only a slight eastward shift was needed to the previous forecast track through 36 hours or so, mainly due to the more eastward initial position based on the reconnaissance fixes. At 48 hours and beyond, no significant changes were required to the previous advisory track, which still shows Florence moving slowly westward across South Carolina and western North Carolina on day 4, followed by a slow northward motion up the Appalachian mountain chain on day 5.

A narrow window of opportunity remains during the next 24 hours or so for Florence to strengthen a little when the hurricane passes over the warmer SSTs and deeper warm water/higher upper-ocean heat content associated with the Gulf Stream, and low vertical shear conditions of 5-10 kt will aid in any strengthening process. However, significant strengthening is not anticipated due to Florence’s large and expanding inner-core wind field. By 36 h and beyond, decreasing ocean heat content along with the slowing forward speed of Florence will likely produce cold upwelling beneath the hurricane, inducing a gradual weakening trend. When Florence moves over the shallow coastal shelf waters in 48-72 h, land interaction and more significant upwelling are anticipated, which should further enhance the weakening process. The NHC intensity forecast remains near the higher statistical guidance through 48 hours, then follows the trend of the decay SHIPS model after that time.

Although the maximum winds are expected to weaken a little more, Florence is still expected to remain a dangerous major hurricane as it approaches the coast. The threat to life from storm surge and rainfall will not diminish, and these impacts will cover a large area regardless of exactly where the center of Florence moves.

2. Life-threatening, catastrophic flash flooding and prolonged significant river flooding are likely over portions of the Carolinas and the southern and central Appalachians late this week into early next week, as Florence is expected to slow down as it approaches the coast and moves inland.

We will have a new update in the morning – stay tuned!