Tropical storm season has been record breaking this year, we have another ex-hurricane heading towards Europe this weekend – a hurricane Oscar became an extratropical storm yesterday and is now deepening and accelerating in the north Atlantic, expected to reach NW Scotland and Faroe islands on Sunday morning with gale force winds.

Here is the visible satellite image of Oscar yesterday afternoon, Oct 31st. It was still a hurricane while Oscar went post-tropical soon after. Maximum sustained winds were near 75 mph (120 km/h) with much higher gusts. Oscar is now an extratropical / post-tropical cyclone over the north-central Atlantic and although a gradual weakening is expected during the next days, Oscar is expected to remain a powerful post-tropical cyclone into the weekend. Hurricane-force winds extend outward up to 35 miles (55 km) from the center, and tropical-storm-force winds extend outward up to 275 miles (445 km). The estimated minimum central pressure was around 980 mb and expected to deepened considerably once Oscar gets into the North Atlantic and act as an extratropical storm. 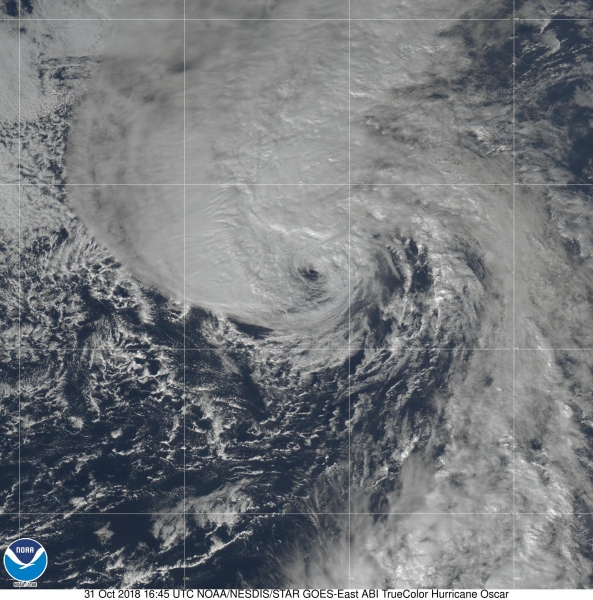 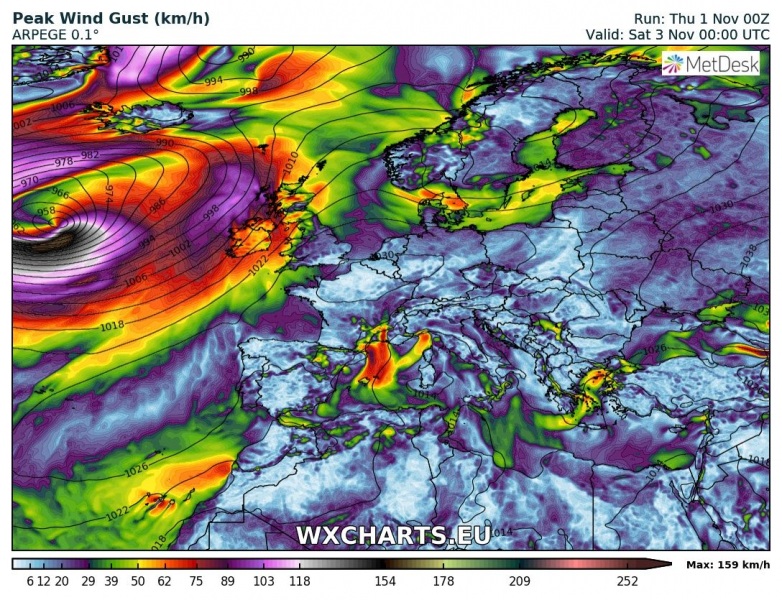 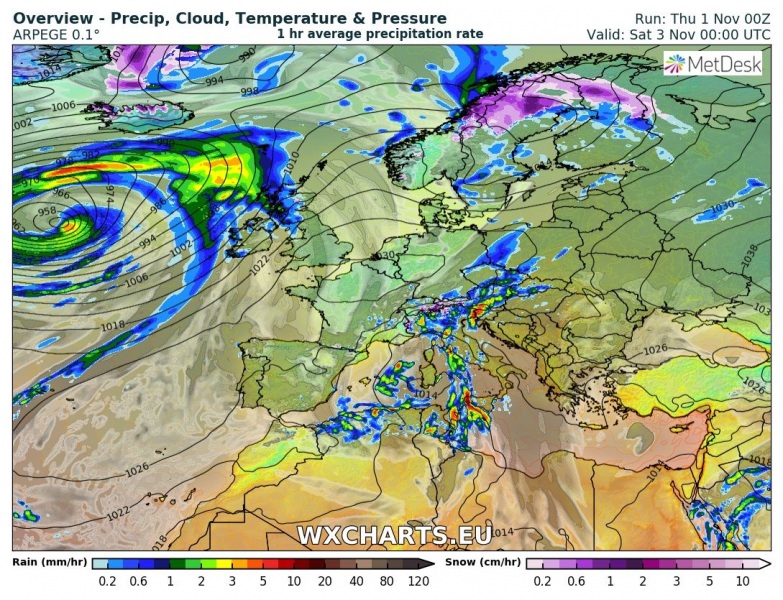 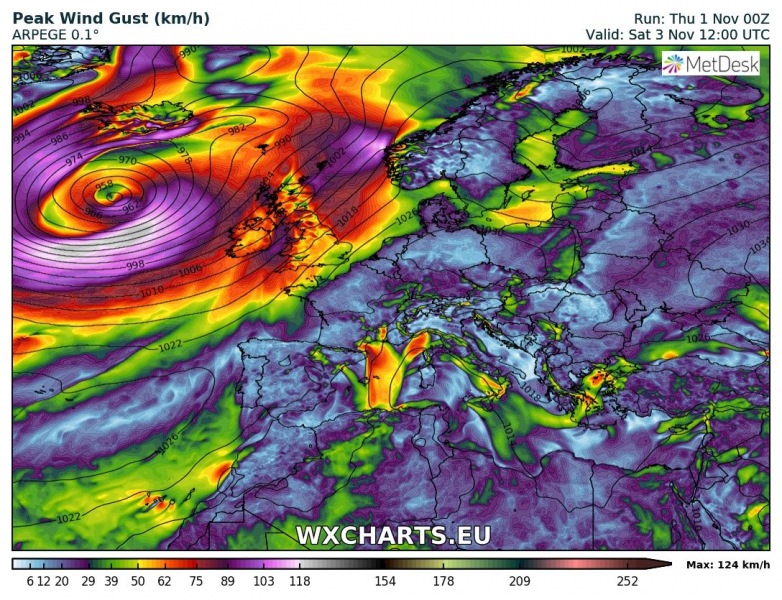 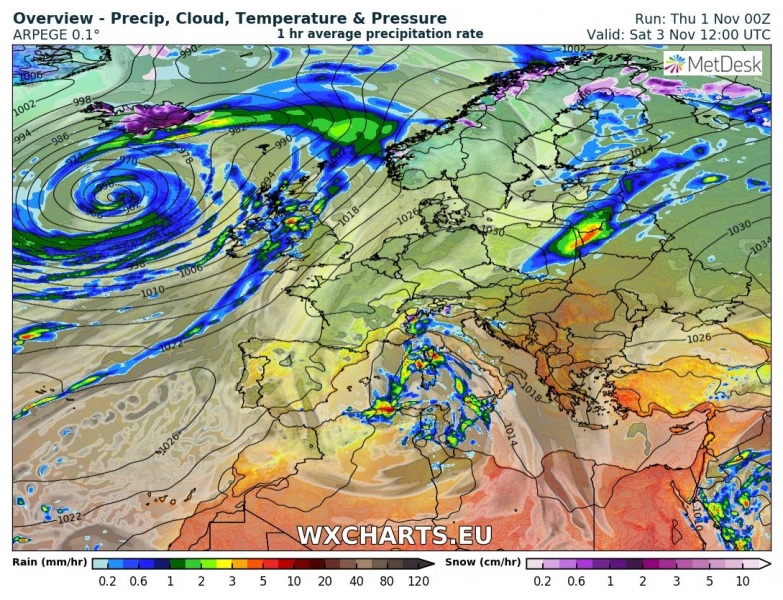 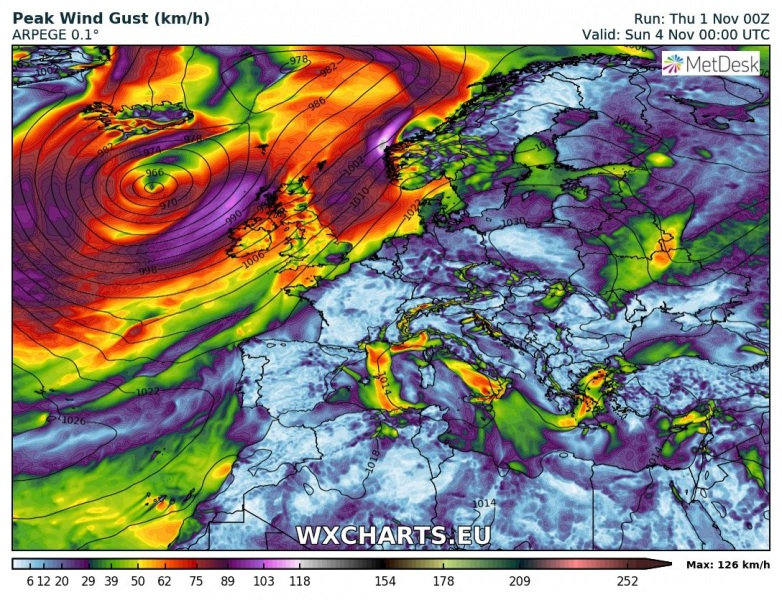 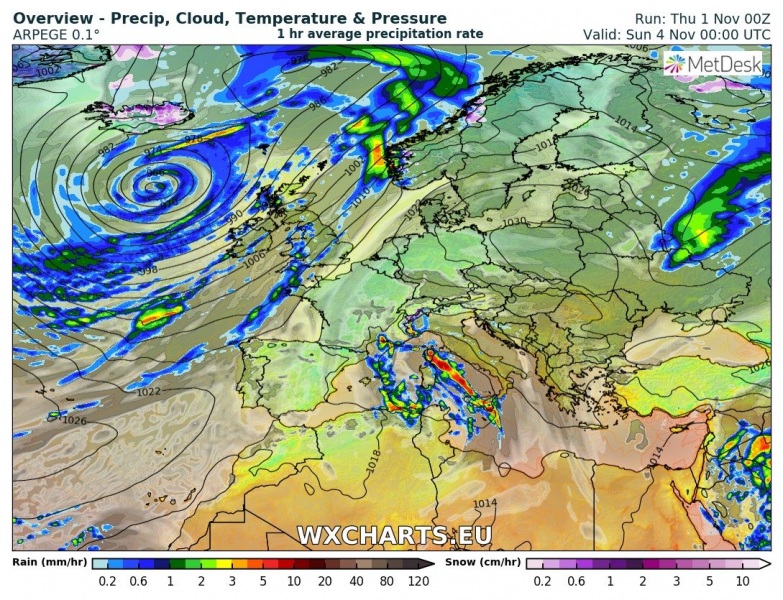 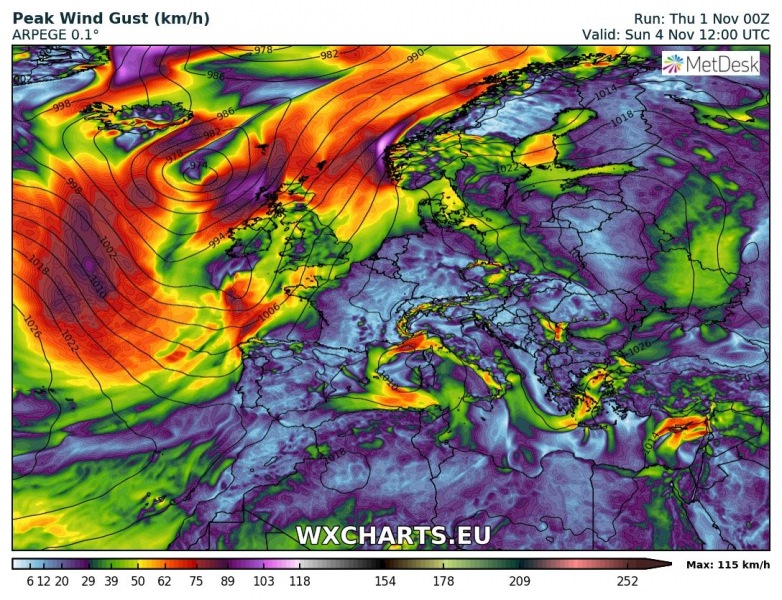 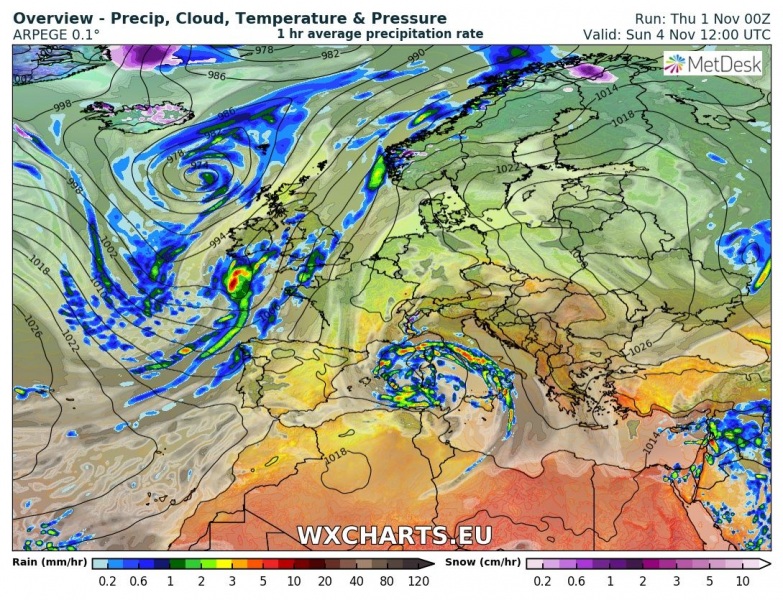 Future track of Oscar with potential for tropical storm winds strength. Oscar will be nearing NW British Isles and Scotland on Saturday afternoon and it’s centre will pass very near to Faroe islands on Sunday during the day. 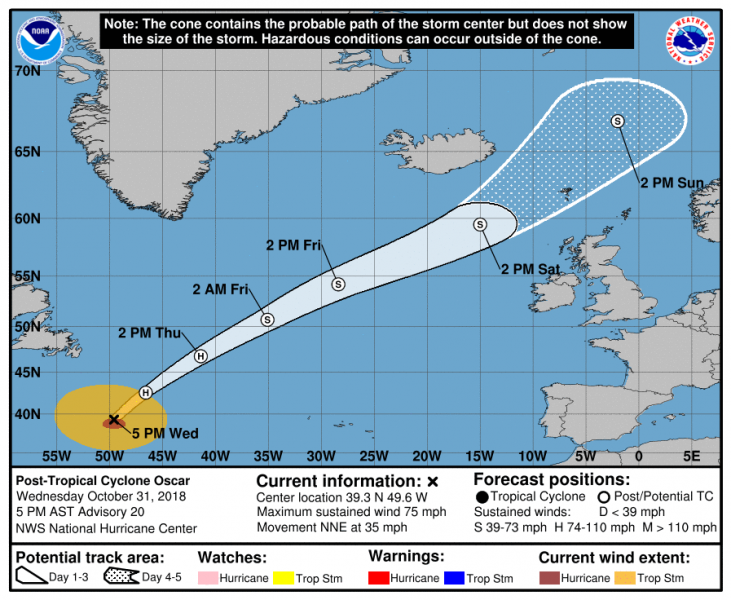 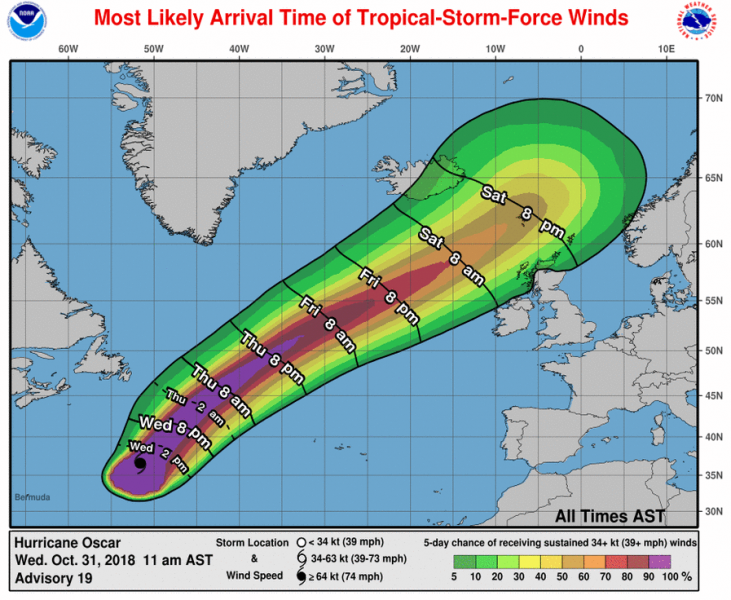 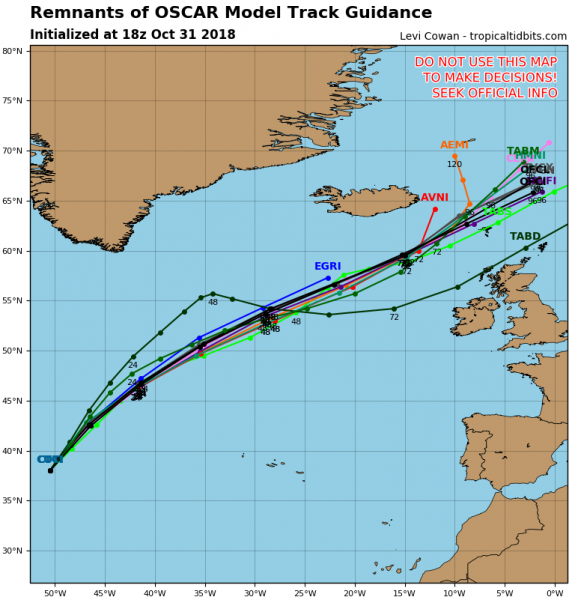 Future track of extratropical storm Oscar in the N Atlantic, maps by: NOAA and tropicaltidbits.com

Peak wind gusts will likely be above 150 km/h far over the open Atlantic and gradually weakening along Oscar’s path towards NW Europe. Attached is also an interesting map of aggregated mean wind, showing the actualy wind force will be Category 1 strength on Saturday. Oscar will likely affect NW Scotland with 90-120 km/h gusts on Sunday’s morning. 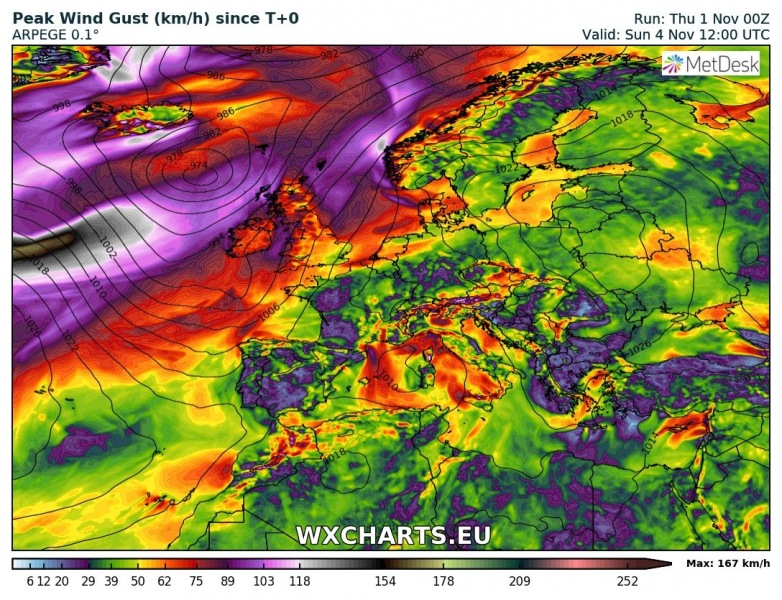 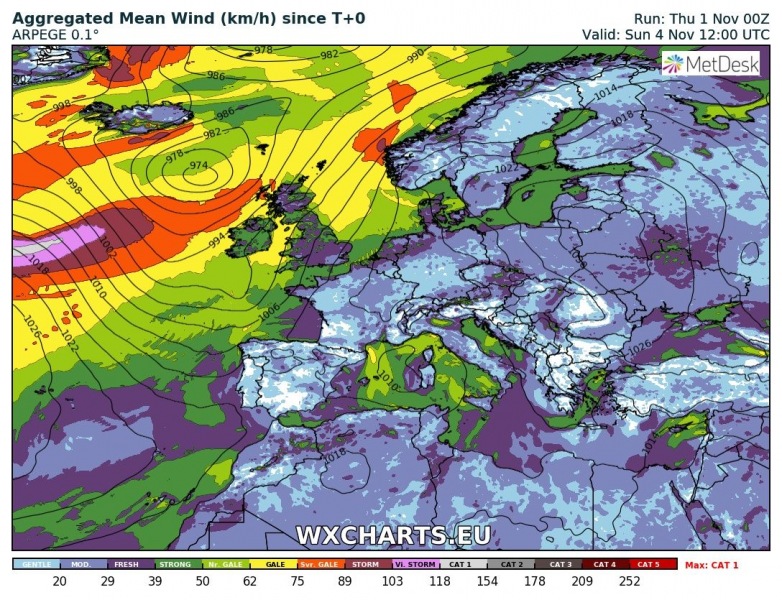 The intensity forecast for Oscar indicates it will remain a strong extratropical cyclone with 45-60 knots (80-110 km/h) sustained winds until it reaches Faroe islands (84-96 hours). 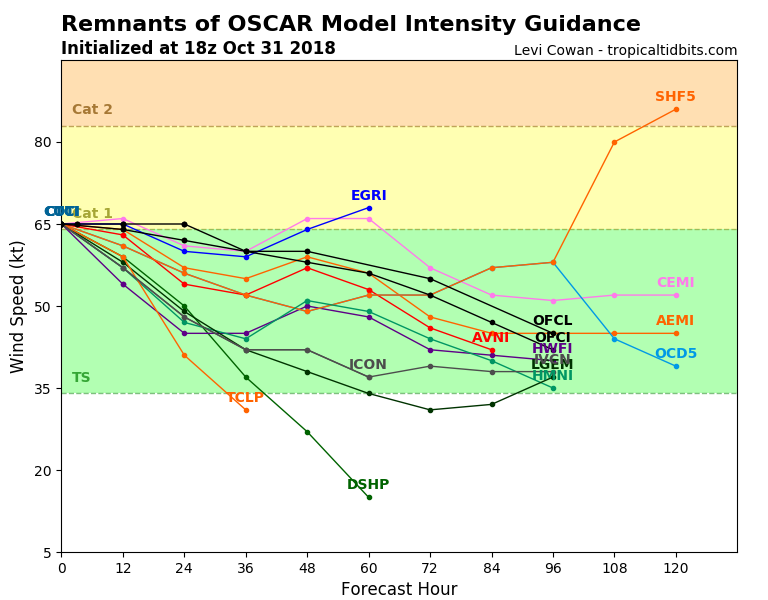 The intensity forecast for the extratropical storm Oscar in the N Atlantic, maps by: Tropicaltidbits.com