An extremely rapid intensification of Tropical Cyclone YASA is underway, the system is heading for a potentially destructive landfall in Fiji this Thursday. Yasa is the strongest storm of the season so far and it is very unusual that a Category 5 storm has formed this early in the season. Yasa could be the strongest tropical cyclone to strike Fiji since a Category 5 storm Winston in February 2016 – the most destructive storm to make landfall in Fiji up to date.

Tropical Cyclone Yasa has rapidly intensified over the past 24 hours and is now packing the maximum sustained winds estimated at 135 knots (155 mph). It has become the strongest cyclone of the 2020-2021 Southern Hemisphere tropical cyclone season to date.

The 2020–21 South Pacific cyclone season is an ongoing period of the year when most tropical cyclones form within the South Pacific Ocean to the east of 160 degrees East. The season officially started on November 1st, 2020, and will end on April 30, 2021.

Actually, Cyclone Yasa is the first named storm of the season.

Yasa continues its rapid intensification and is on the way to a destructive, life-threatening landfall in Fiji. Weather model guidance suggests that Yasa will track in between or over one of the main islands of Viti Levu and Vanua Levu on Thursday this week, Dec 17th. 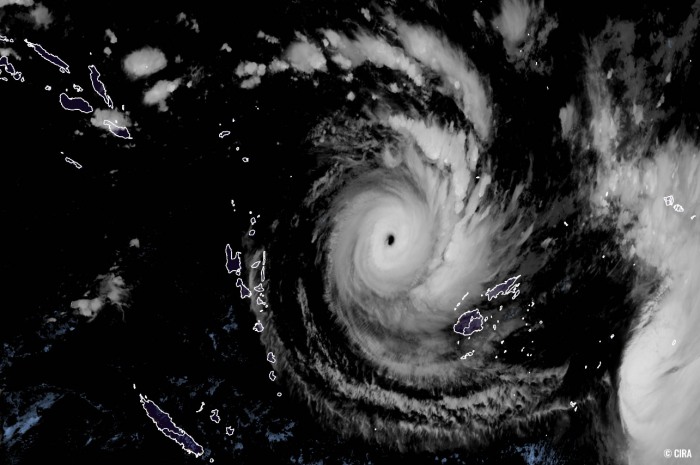 Catastrophic damage due to destructive winds, storm surge, deadly flooding, and landslides are increasingly likely to develop when the eyewall of Yasa will graze across the country. People in Fiji should immediately begin preparing for a major tropical weather event.

Here are the latest analysis and forecast discussions based on the model guidance available.

YASA – FIRST STORM AND THE FIRST CATEGORY 5 OF THE SEASON

Yasa is the second tropical disturbance and the first named storm and severe tropical cyclone of the 2020–21 South Pacific cyclone season. Which seems to have started with an extremely violent system.

The system has developed out tropical disturbance east-northeast of Vanuatu on December 11th. It became a tropical depression a day after, December 12, according to the Fiji Meteorological Service. The JTWC upgraded the system into Tropical Cyclone #05P and assigned the name Yasa.

Initially, the environmental conditions were very favorable for tropical cyclogenesis, with radial outflow in the upper troposphere, low vertical wind shear, and sea surface temperatures almost near 30 °C (86 °F). Slightly less warm waters are present to the south of the Fiji archipelago, around 27 degrees Celsius. 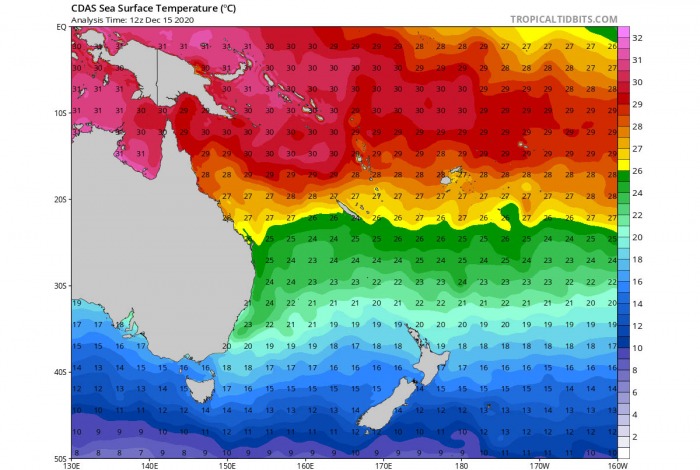 Convective rainbands began to develop around the system as it tracked slowly eastwards, wrapping into the low-level circulation center. The JTWC also noted a possible Fujiwhara Effect with 01F which briefly hampered the formation of the system.

Cyclone Yasa gradually moved through the South Pacific Ocean, going through a small loop whilst rapidly intensifying. In about a 24-hour period, it has explosively strengthened and became a Category 5 intensity storm on the Australian scale (a Category 4 on the Saffir-Simpson scale).

On Wednesday morning, December 16th, Yasa was upgraded to a Category 5 storm! It is the strongest cyclone of the 2020-2021 Southern Hemisphere tropical cyclone!

The very warn southern Pacific Ocean waters are providing a lot of fuel for explosive storms to form. And with very favorable upper-level pattern and low shear, these conditions should remain in place for another 24 hours which should allow Tropical Cyclone Yasa to intensify further.

Attached below is the Ocean Heat Content (OHC)* chart, indicating that Yasa has formed in a very favorable oceanic environment. And these conditions are forecast to remain similar for the next 24-36 hours until Yasa will be drifting east. 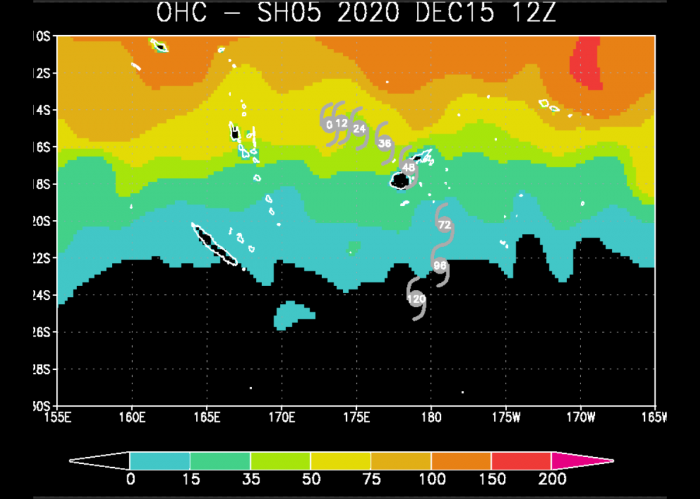 Then, the cyclone will get into slightly less favorable oceanic heat content. But as the system will become even stronger until then, it will be heading towards Fuji islands winds full, extremely dangerous force!

*Ocean Heat Content – is a definition of the heat capacity of the ocean water. It is the integrated temperature change times the density of seawater, times specific heat capacity from the surface down to the deep ocean. It is calculated using the upper 700 meters of ocean water.

Here is the satellite animation of Tropical Cyclone Yasa as of Wednesday morning (local time). We can see an impressive rapid intensification and strengthening of the system, with a symmetrical structure with intense rain bands and large eye forming. Surrounded by very deep convective storms, forming the eyewall.

As on Dec 15th, 18 UTC (local Wednesday morning), Cyclone Yasa had the maximum sustained winds of 135 knots (155 mph) and the minimum central pressure of 919 mbar.

CYCLONE WINSTON – THE STRONGEST LANDFALL IN FIJI ON RECORD

Cyclone Winston was also the costliest tropical cyclone on record in the South Pacific basin. 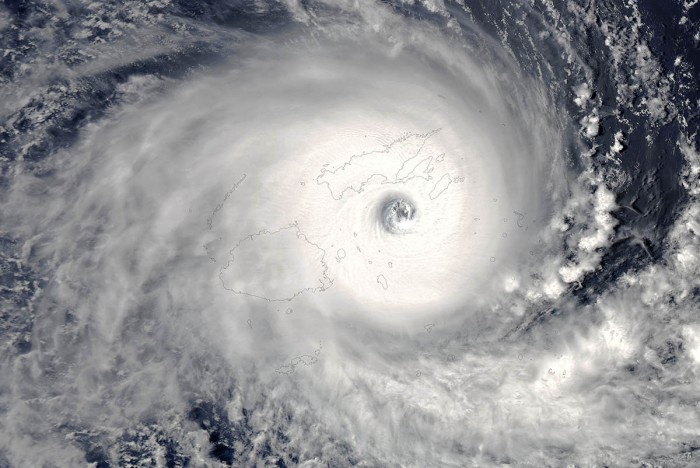 Winston has rapidly intensified into a Category 5 intensity on February 19th, 2016, on both the Australian tropical cyclone scale and the Saffir–Simpson hurricane wind scale. The storm passed directly over Vanua Balavu, where a national record wind gust of 306 km/h (190 mph) was measured.

It has left 44 fatalities across Fiji.

The Tropical Cyclone Yasa (designated as #05P) was located approximately 350 miles west-northwest of Suva, Fiji, on Dec 15th, 12 UTC. It was moving east with a forward speed of only 5 knots and extremely rapid intensification is underway. 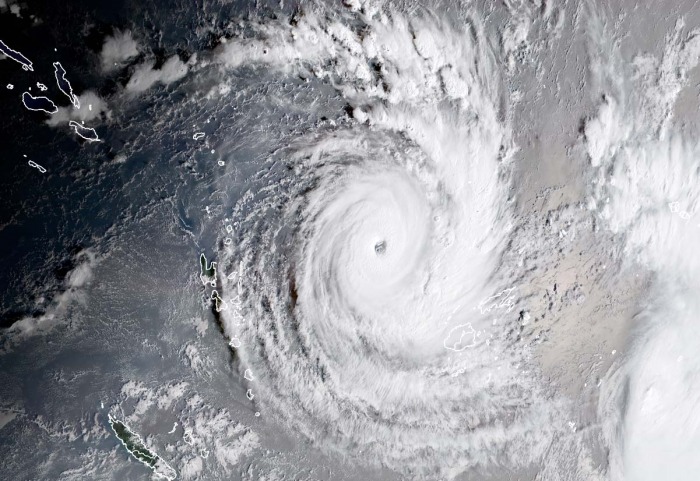 The initial intensity is assessed with fair confidence at 135 knots (155 mph or a borderline Category 5 per Saffir-Simpson scale), based on the estimates from
the Advanced Dvorak Technique (Final/Raw T number 6.8).

Storms within the eyewall are producing very powerful winds. 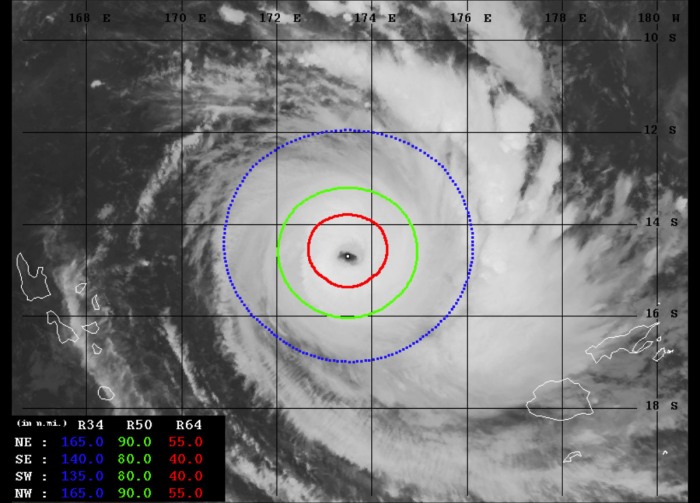 The ADT analysis is estimating that cyclone Yasa already has around 130+ knots of maximum sustained winds. The central pressure is below 930 mbar and continues deepening.

Dvorak’s Final T number is 6.8, while Yasa is still rapidly intensifying. As we can see from the intensity analysis chart below, the system has entered an explosive intensification over the past 12-18 hours. 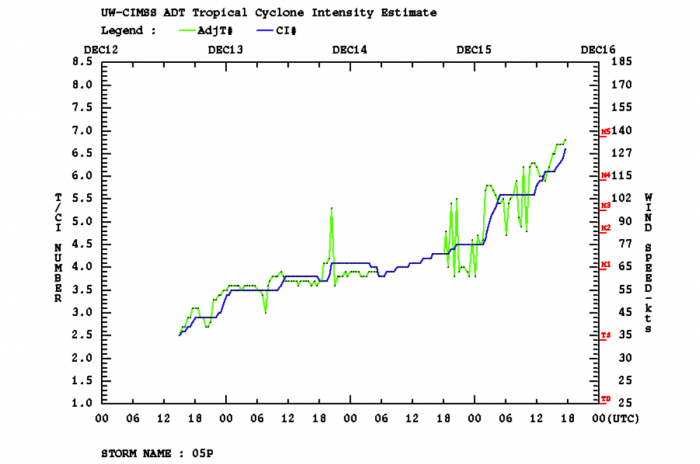 The maximum sustained winds inside the eyewall of Tropical Cyclone Yasa have significantly increased, from 70 knots (80 mph) to 135 knots (155 mph) between Dec 14th 18 UTC and Dec 15th 18 UTC. That is a remarkable 65 knots (75 mph) increase in the system’s sustained winds over the 24-hour period.

Yasa has become a *violent* monster.

The animated enhanced infrared satellite imagery depicts an explosively intensifying system, with a well-defined around 15-20 nautical mile eye and spiral bands of deep convection surrounding the core of the storm. Fat-looking eyewall convection indicates very low temperatures on the cloud tops, from -85 to -90 °C! 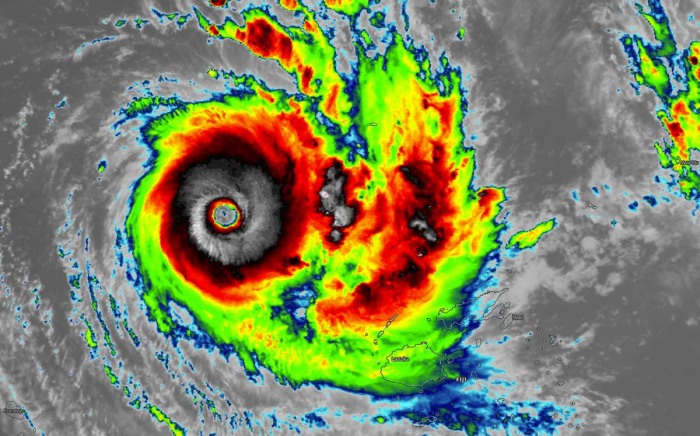 Cyclone Yasa is tracking slowly eastward along the southern periphery of an east-west oriented near-equatorial ridge positioned to its north, through a favorable environment characterized by very warm (near 28-29 degrees Celsius) sea surface temperatures and low (5-10 knots) vertical wind shear.

A textbook robust radial outflow ventilation is seen on the satellite imagery, provided by near-ideal upper-level support over the top of the system. The system’s structure has become very symmetrical with a massive amount of storms, growing its size and intensity.

The Fiji archipelago with the main islands Viti Levu and Vanua Levu are seen to the bottom right of the storm. 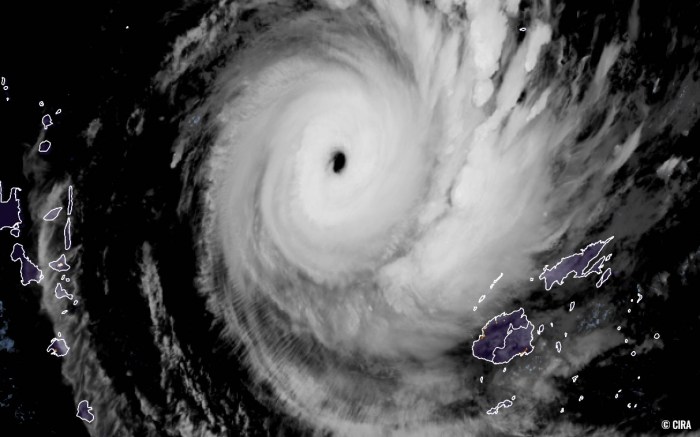 The first daylight scan of the rapidly developing storm as of Wednesday morning local time in Fiji. Explosive deep convection is seen within the eyewall, a textbook appearance of a very intense tropical system. 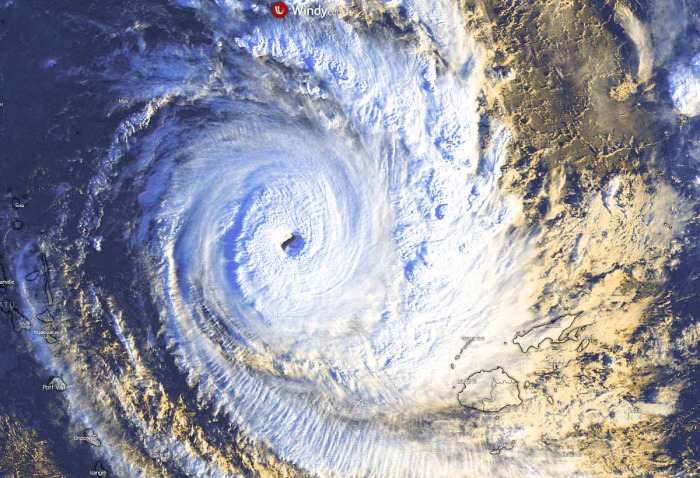 The region is known for some very intense tropical cyclones in the last decades, but Yasa is one of the earliest storms to gain a Category 5 strength so early in the Southern Hemisphere tropical cyclone season 2020/2021.

Tropical Cyclone Yasa will continue strengthening over the next 24 hours while slowly moving east, then the expanding and strengthening upper ridge to its north will push it more towards the southeast. This means that the Fiji archipelago will be in its direct path.

The system is forecast to very likely pass between the islands of Viti Levu and Vanua Levu on Thursday, roughly 48 hours from now. It will continue moving southeast after the closest pass to the islands on Friday. Into the weekend days, Yasa will turn south-southwestward along the northern periphery of a strong ridge to the north of New Zealand. 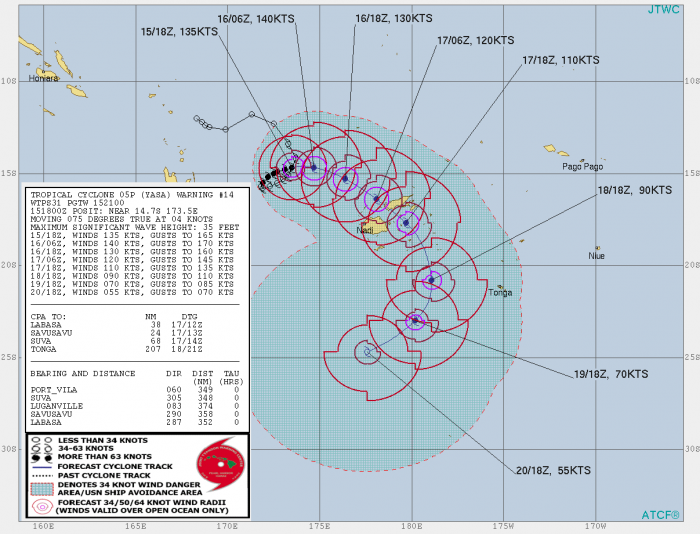 Cyclone Yasa is forecast to continue steadily intensifying over the next 24 hours, reaching its peak of around 140 knots by Wednesday evening local time. The extremely favorable environmental conditions support this confidence in further intensification is supported by very warm 27-29 °C sea temperatures along its future track.

Attached below is the GFS ensemble model forecast (GEFS) with possible tracks over the next 10 days. We can see that Yasa will be moving southeast across the Fiji archipelago over the next 2-3 days, then turning south and southwest while weakening on its way towards New Zealand. 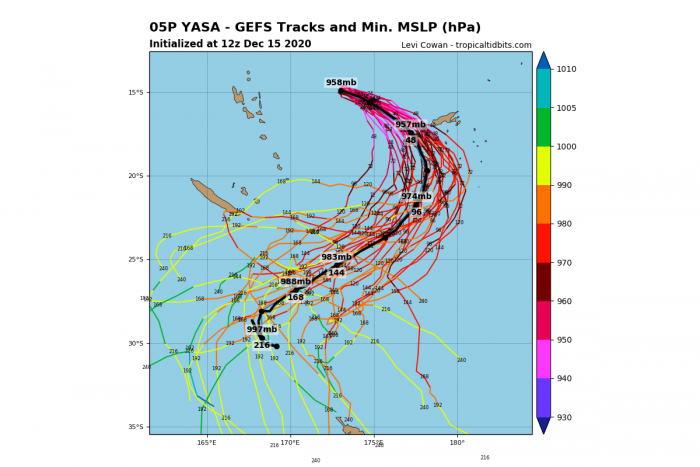 There are very low, but non-zero chances the system reaches the island around Christmas. However, these trends are so far in advance, that the exact track after Yasa turns away from Fiji is still rather undefined.

What appears likely on the weather models is a serious concern for the Fiji archipelago as there are low chances that Cyclone Yasa would lose its strength prior to its impact on Fiji islands. There are very high chances it will be an extremely dangerous Category 5 intensity landfall on Vanua Levu, according to the ECMWF global model.

Attached below is an exceptional swath of peak wind gusts along the path of Yasa. As we can see, the model is hinting at very powerful winds of 200 to more than 250 km/h spread from its current position all the way across the Vanua Levu and the sea channel towards main Fiji’s island Viti Levu. 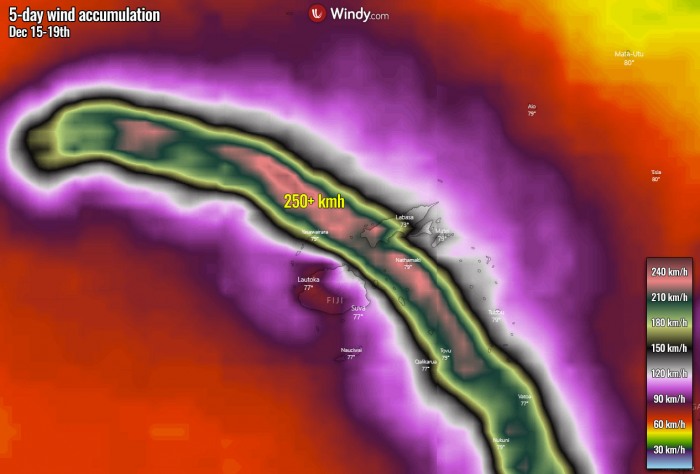 As Yasa approaches its landfall in Fiji on Thursday afternoon into evening hours, its destructive winds will graze across the country. Widespread destructive wind gusts will likely produce significant damage to well-built houses with catastrophic tree damage where the strongest winds will strike. 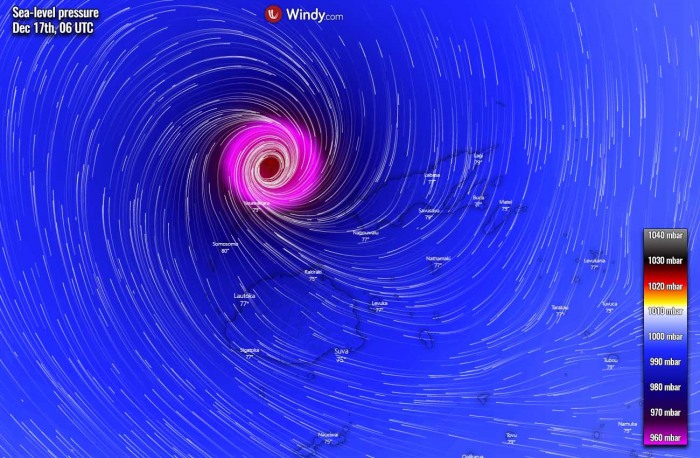 The image above is a forecast for the surface pressure and winds as of Thursday afternoon, in the final hours before the cyclone’s landfall/pass to Fiji archipelago. The forecast chart is from the European ECMWF model.

Winds of such violent intensity are also generating very significant wave heights, those will be gradually moving towards the Vanua Levu and Viti Levu islands. This is a real concern for a destructive storm surge along with the northern coastal areas of both islands, coastal flooding could be destructive. 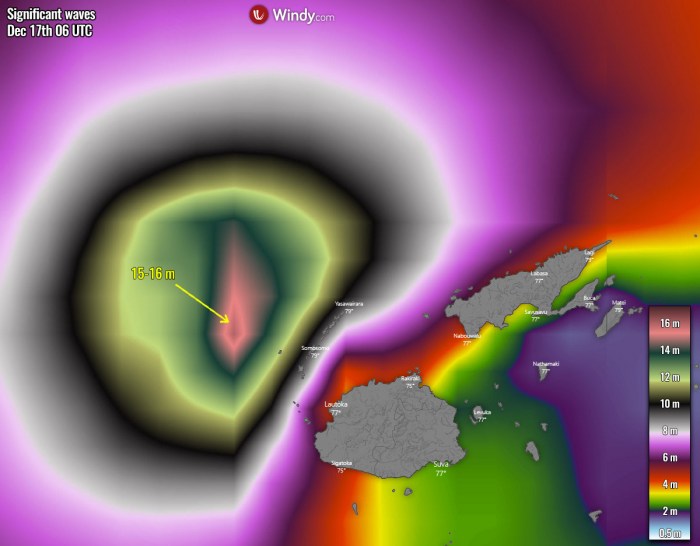 The Yasawa Islands, located to the north of the Viti Levu island will likely be completely devastated by extremely powerful Category 5 winds and destructive, 15+ meter waves.

The damage will be catastrophic!

The steering flow between the upper-level ridges is resulting in a rather slow movement and forward speed of the Tropical Cyclone Yasa. This means that deep convective storms are producing an extreme amount of rain over the same areas over time.

Generally, 200-400 mm of rainfall accumulation can be expected along the path of Yasa over the next 5 days, mainly through the next 48 hours while the system passes over the Fiji archipelago. 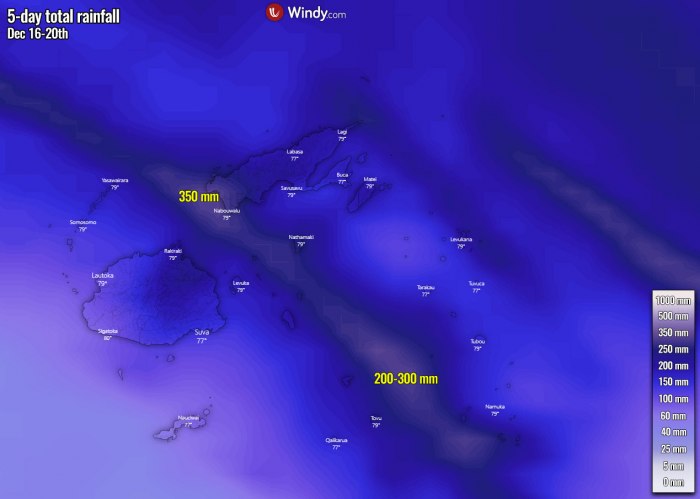 Depending in the exact track of the cyclone, the rainfall sums will be the highest. Some models suggest that areas, where storms will be the strongest and dump tons of rain, could receive even more than 500 mm of rain until the weekend!

The intense rain bands of the system will introduce extreme, torrential rainfall with a strongly enhanced risk for widespread river flooding, coastal flooding, and a deadly risk for mudslides across both largest Fiji’s islands Vanua Levu and Viti Levu on Thursday through Friday.

On December 15th, heavy rain warning was issued by the Fiji meteorological service. It has been issued for the Yasawa and Mamanuca islands, eastern Viti Levu, Vanua Levu, Taveuni, and other smaller islands nearby.

All shipping services are closed from Dec 16th further, and the Ministry of Fisheries strongly advised fishermen to refrain from traveling out to sea. The Ministry of Education, Heritage and Arts ordered the closure of all schools as schools would be used for evacuation centers.