Off to the northeast coast of Queensland, Australia, a rapidly developing tropical cyclone Niran forms this week. Very favorable warm seas and low shear should allow it to become a high-end Category 3 storm by Friday while on its way towards New Caledonia this coming weekend.

A monster Tropical Cyclone Niran peaks at Category 5, now heads for a destructive landfall in New Caledonia. Another violent storm west in the Indian Ocean

*****
Tropical Cyclone Niran is located approximately 200 nautical miles northeast of Cairns, Australia (Queensland), and has tracked eastward at a very slow 4 knots forward speed over the past six hours. The initial intensity is set at 70 knots, based on an overall assessment of Dvorak intensity estimates of T4.5 (77 knots) reflecting the sustained convective structure of the system.

The marginally favorable environment will improve as the cyclone Niran tracks into better upper-level outflow and help fuel a gradual intensification to a peak of around 105 knots today into Friday. 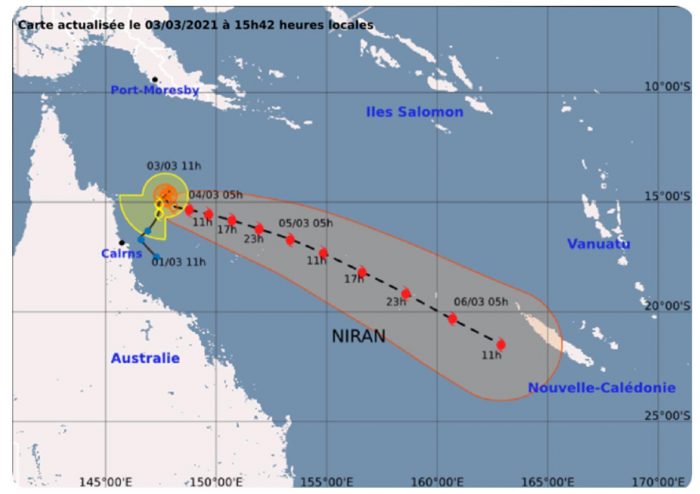 Tropical Cyclone Niran will be passing just south of New Caledonia this coming weekend, around 60 hours from this local morning March 4th. Niran should be approximately 450nm north-northeast of Auckland, New Zealand on Monday.

The animated enhanced infrared satellite imagery indicates that the system has maintained an overall convective signature with the main feeder band wrapping in from the north into an obscured low-level circulation that is under cold overshooting cloud tops.

The environment is overall favorable with low (10-15 knots) vertical wind shear, and very warm near 30 °C sea surface temperatures. Niran is quasi-stationary between the equatorial ridge and the subtropical ridge to the west over Australia. The equatorial ridge is expected to become the dominant steering mechanism and slowly push the system towards southeastward.

The environmental conditions are quite impressive over the tropical region north and northeast of Australia in recent weeks. There are hot sea temperature waters of 30-31 °C over the Gulf of Carpentaria as well as around Papua New Guinea and towards Vanuatu. But also around 29 °C between the coast of Queensland and New Caledonia, over the Coral Sea. 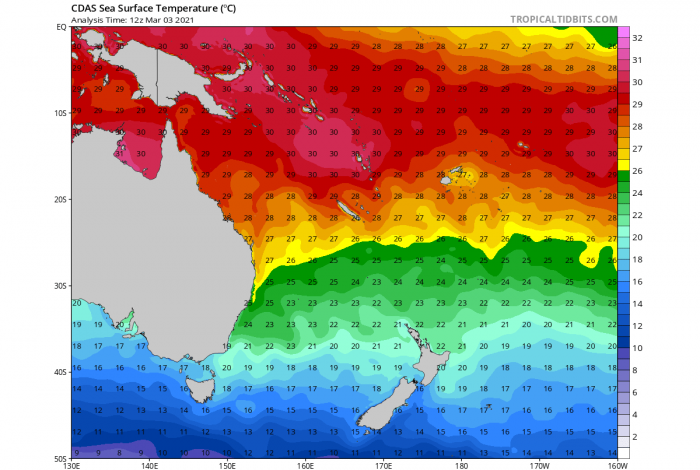 These above-normal sea temperature conditions have, together with low vertical wind shear, leading to a formation of a compact and strong Tropical Cyclone Niran. About 1-1.5 °C warmer than usual early March seas are in place, more than enough to help to boost the system.

Its track brings it into the area of even better conditions over the next 24 hours, so Niran is expected to additionally strengthen and could become a high-end Category 3 or even low-end Category 4 tropical cyclone. These conditions should allow it to maintain high intensity until late Friday. 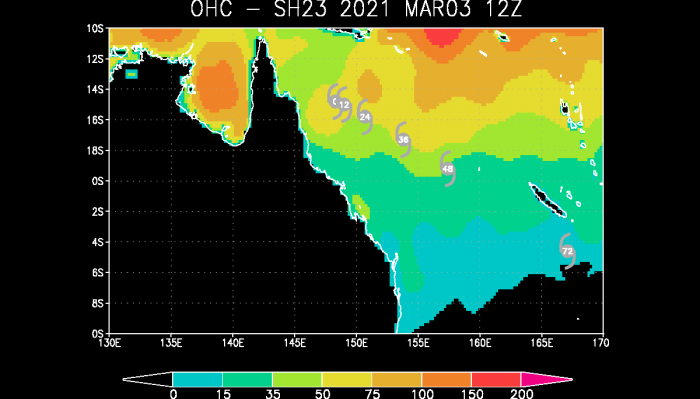 This Thursday morning, a quite impressive satellite view is seen with an obvious sign that the cyclone means a serious threat. A compact and intense structure hints at additional strengthening throughout the day. Severe storms are wrapping around the core with a textbook cyclonic structure. 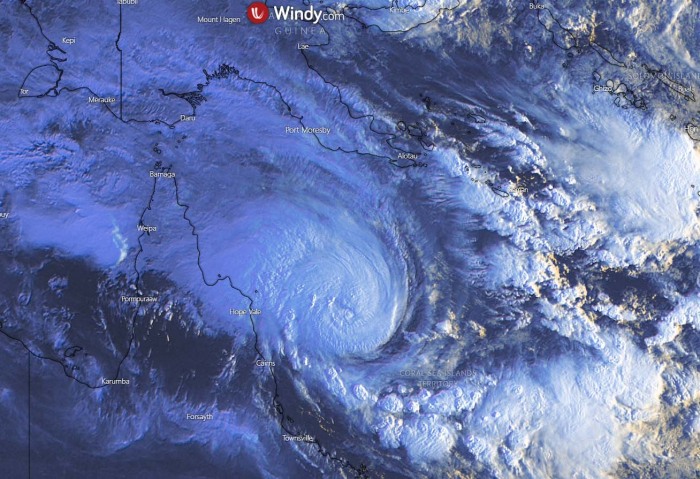 The good thing for Queensland is that Tropical Cyclone Niran is now beginning a slightly faster forward speed, so its effect is decreasing for the coastal areas and will not bring any dangerous threat. The winds in the core of the cyclone are now already reaching hurricane-force-winds, as the 64-knots wind radii are expanding 15-25 miles around the center of the low. 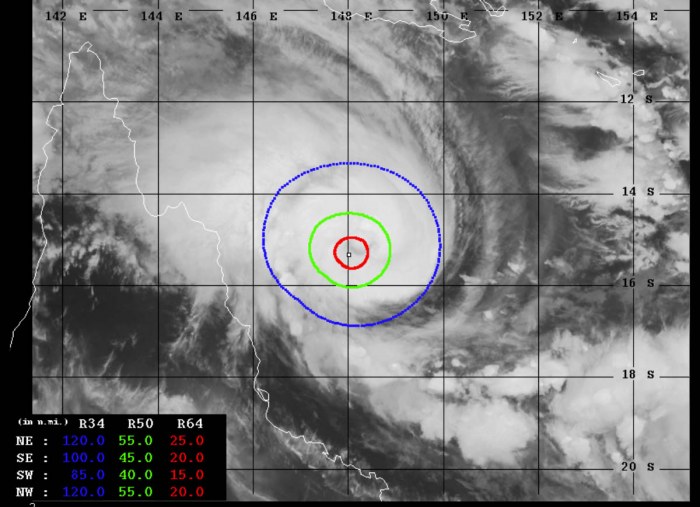 While the tropical-storm-force of 50-knots are spread across the wind radii of 40-55 knots around the core. Thankfully, those are only affecting the open waters of the Coral Sea. These winds will be gradually increasing in size and intensity today and tonight until the system peaks tomorrow, on Friday.

Tropical Cyclone Niran will continue strengthening this Thursday and could peak at around 105-110 knots by Friday. At this time it will be about halfway between Australia and New Caledonia, so away from any land areas. 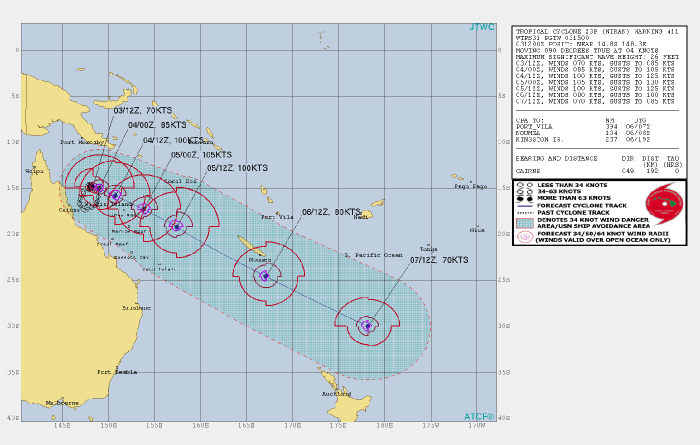 After Friday, Niran comes into a less favorable environment as the increased vertical wind shear and cooling sea waters will gradually erode the cyclone’s intensity down to around 70 knots by Monday. Still, it will remain a dangerous cyclone while passing along the western coast of New Caledonia on Saturday.

The attached wind gusts chart for Saturday morning hints at the potential position of Tropical Cyclone Niran, located just west of New Caledonia with its center. Chances are, if the track will take a bit more northerly trajectory, Niran would pass very near the coast with dangerous severe winds, storm surge, and flooding rains. 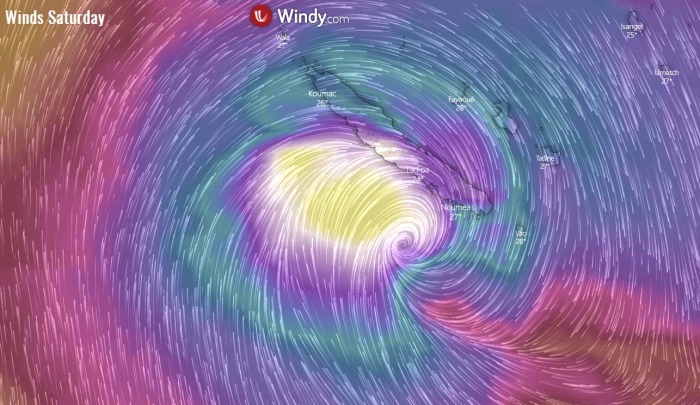 Additionally, over the weekend, Niran will begin a subtropical transition as it approaches the cold baroclinic zone and become a fully subtropical system on Monday or Tuesday.

Here is the complete wind gusts swath along the track of Cyclone Niran over the next 5-7 days. We can see the system continues strengthening today (Thursday) and maintains its powerful intensity until it nears New Caledonia on late Friday into Saturday morning. The strongest gusts during peak intensity on Friday could be up to 250 km/h. 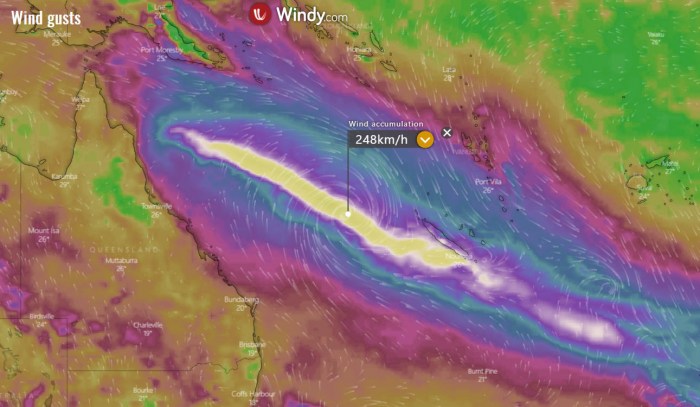 Depending on Niran’s track, the flooding potential will develop. The attached ECMWF model chart for the total rainfall accumulation over the next 10 days does not simulate a lot of rain across New Caledonia.

But just a minor change in the track could result in significantly different amounts of rain. Flooding could become a serious issue of Tropical Cyclone Niran passes or landfalls on the island.

Queensland, Australia will mostly be out of any significant amount of rain, as the steering winds keep the precipitation core and storms to the eastern periphery of Niran. Some spots of 300-450 mm total rain are visible where the system peaks between Australia and New Caledonia. 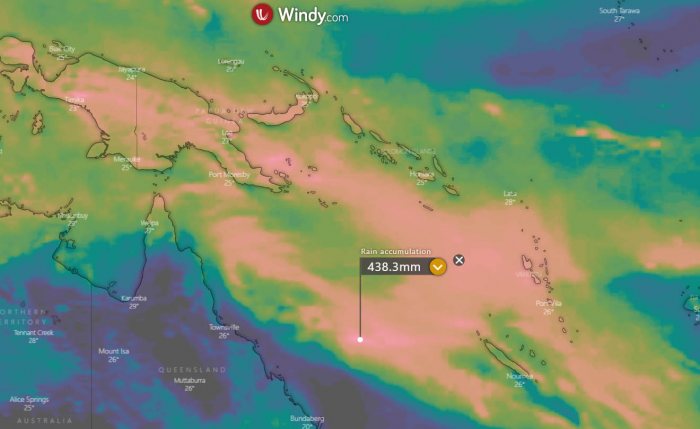 Huge tropical rains are expected across Papua New Guinea and Vanuatu at the same time, thanks to the very high tropical moisture and numerous storms. Flooding will also be an issue there.

After Niran pass near New Caledonia, it will continue weakening and finally dissipate net week.

Note: The last violent system in this tropical region was a Category 5 cyclone Jasa blasting into Fiji back in mid-December last year.