Three (3) significant earthquakes have struck near New Zealand within 6 hours of one another. A tsunami warning has been issued for parts of New Zealand while the latest, 8.1 magnitude earthquake has also prompted a tsunami watch for Hawaii.

At least three significant earthquakes hit the southwestern Pacific on local Friday morning, rising the concerns for tsunamis to follow. Attached below is the seismograph of all three earthquakes (M7.3, M7.4 and M8.1) today, visible at Rarotonga, Cook Islands, about 2500 km northeast of the epicenters. 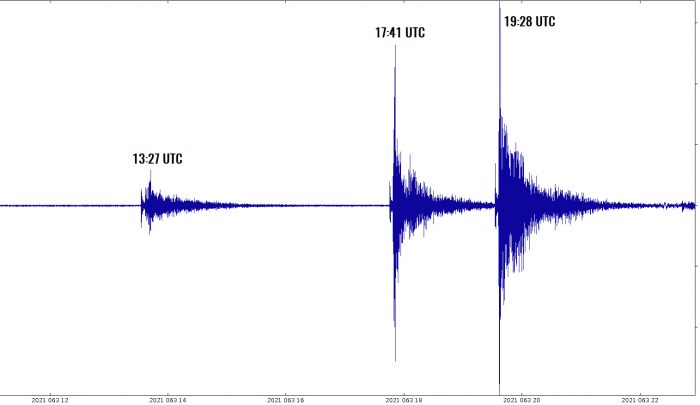 The seismic active area is known as the Kermadec Trench. A linear ocean trench in the south Pacific Ocean.

The Kermadec Trench stretches about 600 miles (1000 km) from the Louisville Seamount Chain in the north (26 °S) to the Hikurangi Plateau in the south (37 degrees South), northeast of New Zealand’s North Island. Together with the Tonga Trench to the north, the Kermadec Trench forms the 1200 mile (2000 km) long, near-linear Kermadec-Tonga subduction system. 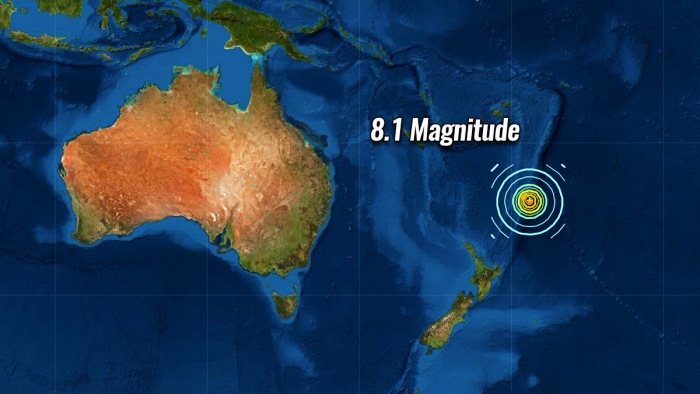 This is the strongest earthquake to strike worldwide since about two years ago (May 26th, 2019), when a magnitude 8.0 quake hit Peru.

The epicenter was about 600 miles (950 km) northeast of New Zealand, with shaking reported in some parts of the country and nearby islands.

The first earthquake of magnitude 7.3 today struck the Kermadec Islands at 2:27 am local time (13:27 UTC). More than 50.000 people reported shaking on Geonet.

The National Emergency Management Agency has issued a TSUNAMI WARNING for New Zealand coastal areas following the magnitude 8.1 earthquake near KERMADEC ISLANDS REGION. There are a LAND and MARINE TSUNAMI THREAT.

Flooding is expected along the east and west coasts of the North Island. From Cape Reinga to Ahipara and Whangarei, from Matata to Tolaga Bay including Whakatane and Opotiki, and Great Barrier Island.

People living near the coast must move immediately to the nearest high ground, out of all tsunami evacuation zones, or as far inland as possible. Do not stay at home NEMA stated on their website.

NEMA has called for immediate and full evacuation of those areas, with people instructed go to higher ground. Radio New Zealand is reporting that the first waves have reached Opotiki around 10.20 am local time.

Other areas, including along the west and east coast of the north island, Steward Island, and the Chatham Islands are expected to see flooding. 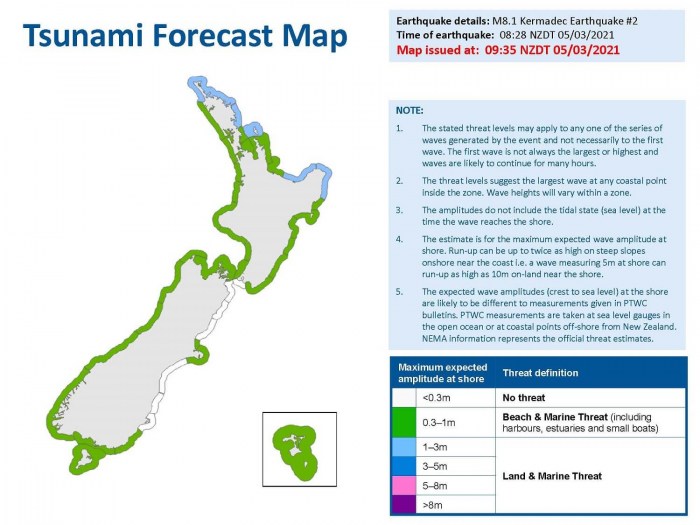 Tsunami waves could reach 10 feet (up to 3 m) along with the coastal areas. Higher waves due to tsunami are also possible along the coasts of Fiji, American Samoa, New Zealand, and other nearby islands.

According to the Bureau of Meteorology in Australia, a marine tsunami warning has been issued for Norfolk Island following the 8.1 magnitude earthquake. No threat to the Australian mainland is expected.

According to the Emergency Mgmt. in Oahu, Hawaii, a TSUNAMI WATCH has been issued for Hawaii. A Watch means that a tsunami may impact Hawaii and conditions needs to be monitored further. The threat is still being evaluated by the Pacific Tsunami Warning Center.

According to the U.S. National Tsunami Warning Center, tsunami is not expected for the West Coast (California, Oregon, Washington, British Columbia) and Alaska.

The last earthquake near the Kermadec Islands, New Zealand occurred as the result of reverse faulting in the Tonga-Kermadec subduction zone at a depth of ~20 km according to the U.S. Geological Survey (USGS). 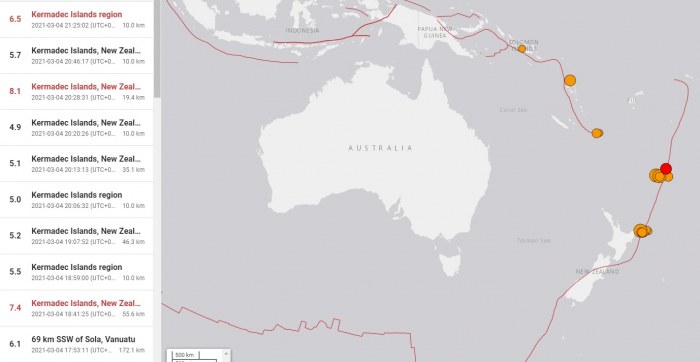 The M8.1 earthquake was preceded about 107 minutes by an M 7.4 thrust earthquake located ~50 km west of the M 8.1. The proximity and timing of the two events indicate that the M 7.4 was likely a foreshock of the M 8.1 earthquake.

The interaction between the Pacific and Australian plates creates one of the most seismically active tectonic environments in the world. 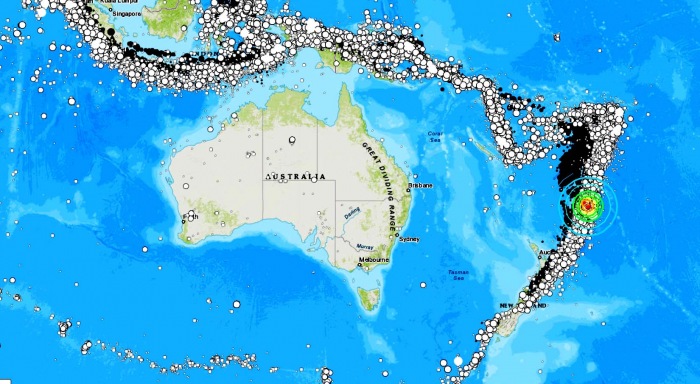 The Kermadec Trench is one of Earth’s deepest oceanic trenches, reaching a depth of 33.000 feet (10.047 metres). It was formed by the subduction of the Pacific Plate under the Indo-Australian Plate. And it runs parallel with and to the east of the Kermadec Ridge and island arc.

The Tonga Trench marks the continuation of subduction to the north. The convergence rates along this subduction system are among the fastest on Earth, 80 mm (3.1 in)/yr in the north and 45 mm (1.8 in)/yr in the south.

The largest previous event was a Magnitude 8.0 earthquake in January 1976, more than 100 km to the north, with no associated casualties or damage.

The earthquake today comes just over a week since the country of New Zealand marked 10 years since a destructive magnitude 6.3 earthquake struck Christchurch and killing 185 people with thousands injured on February 22nd, 2011.

It is also quite unusual for three significant earthquakes to occur within a 300-mile radius of a certain point within several hours period. Based on the USGS database, the last time there were 3 separate M7+ earthquakes in the same area on the same day was the Mar. 11, 2011 Tohoku, Japan event. 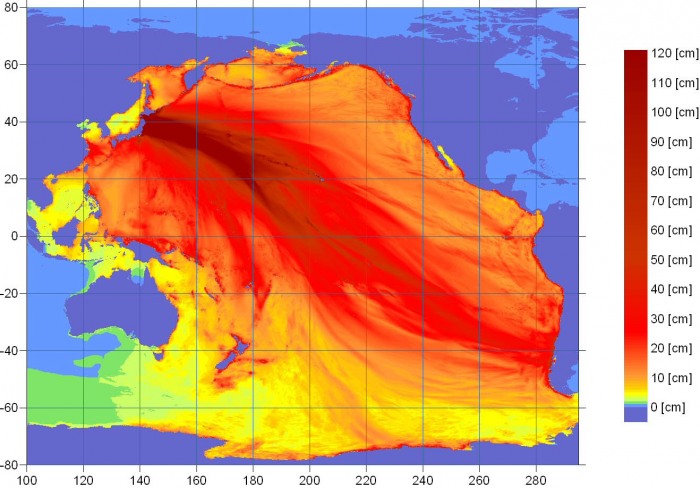 There were also several days with two M7+ in the same area, the most recent event was on November 24th, 2015.

The global average for M7+ earthquakes is approx. 14 events each year. And only around one event of Magnitude 8+ per year globally.

*** This is breaking news, and the article will be updated as more information follows.

The latest Earthquake swarm is underway also in Iceland