Henri, the 8th system of the Atlantic Hurricane Season 2021, is expected to become a hurricane this Saturday and hit parts of the Northeast U.S. on Sunday, with hurricane-force impact increasingly likely. Hurricane and Storm Surge Watch are now in effect for portions of Long Island, Connecticut, Rhode Island, and southeastern Massachusetts ahead of the strengthening tropical storm Henri. Flooding could also be a significant threat after the landfall, including across the city of Boston.

As we entered the second half of August, the activity of the Atlantic Hurricane Season has increased as it typically does once we approach the first month of the peak period of the highest tropical activity in the Atlantic.

This Friday morning, Henri remains a strong tropical storm with sustained winds of 65 mph, just a shy below the hurricane force. This weekend, Henri will continue to move away from Bermuda, coming closer to the Carolina coastline, and cross the Gulf Stream’s very warm waters. This will likely boost its intensity again and Henri is expected to become a hurricane.

While Henri was upgraded into a hurricane for a short time on Wednesday and Thursday, it rounded Bermuda to its south and is now turning almost due north. Heading right towards the New England of the United States this weekend. The impact is likely to be significant, with both huge amounts of rain and storm surge.

Once Henri is upgraded to a hurricane, it is forecast to travel north-northeast and will be near the northeast coast of the U.S. on Sunday into Monday with an enhanced risk of storm surge, wind, and rain impacts in portions of southern New England and eastern Long Island. Heavy rainfall may lead to flash, urban, and small stream flooding over portions of southern New England Sunday into Monday.

Dangerous swells from Henri will begin to reach much of the east coast of the U.S. and Atlantic Canada by the end of the week and also continue through the weekend. These major swells could cause life-threatening surf and rip currents.

Very favorable environmental and oceanic conditions for tropical development remain in place, as much above normal warmth of the Atlantic Ocean and the Caribbean Sea is coinciding with an MJO wave aloft.

For the peak of the hurricane season this year, we are expecting an above-normal activity, according to NOAA. Thanks to both very warm Atlantic glasses of water and the returning La-Nina this fall. The coming weeks will bring more activity of tropical cyclones as the most important region in the tropical Atlantic – the MDR region is anomalously warm.

The Atlantic hurricane season recently had 3 simultaneously ongoing tropical cyclones. Fred made landfall in Florida Panhandle on Monday while hurricane Grace made landfall in the Yucatan peninsula on Thursday this week. Tropical Storm Henri wasn’t in much of a focus at the beginning, but a lot has changed in recent days.

Early Tuesday this week, the 8th named storm – Henri has formed near Bermuda and pushed the Atlantic hurricane season statistics above half of the typical average number of storms per year. Only two other years – 2005 and 2020 had 8 Atlantic Basin named storms by August 17th. Hence, does it mean something if we are aware of how active those seasons were and the oceanic conditions are similar or even warmer? It does. 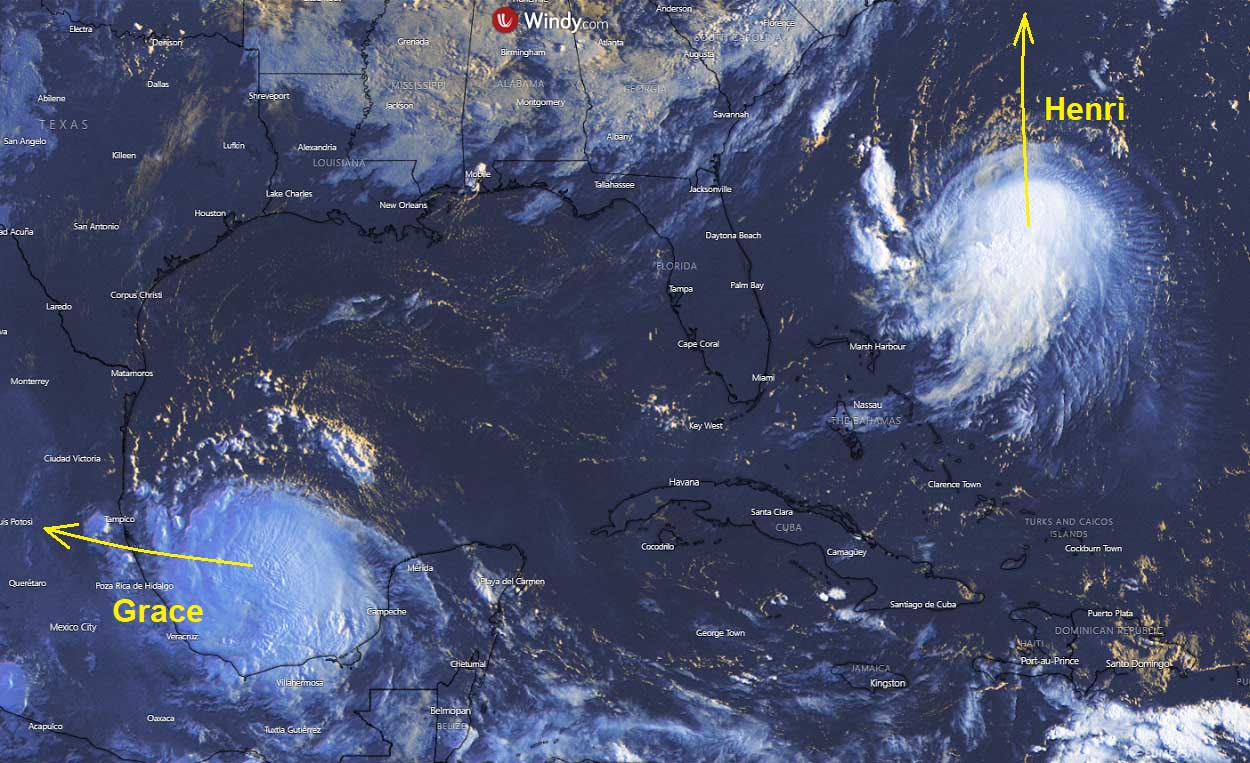 A typical Atlantic hurricane season produces around 14 named tropical systems every year, with about 7 of those normally becoming hurricanes. 3 of those hurricanes can also reach a major strength (a Category 3 or greater). The seasonal activity normally has two waves when the activity ramps up.

The first increase in the activity usually begins through the second half of August into early September. With the Atlantic Ocean nearing its highest water temperatures of the year, coinciding with more waves moving from West Africa towards the Caribbean region and the United States. 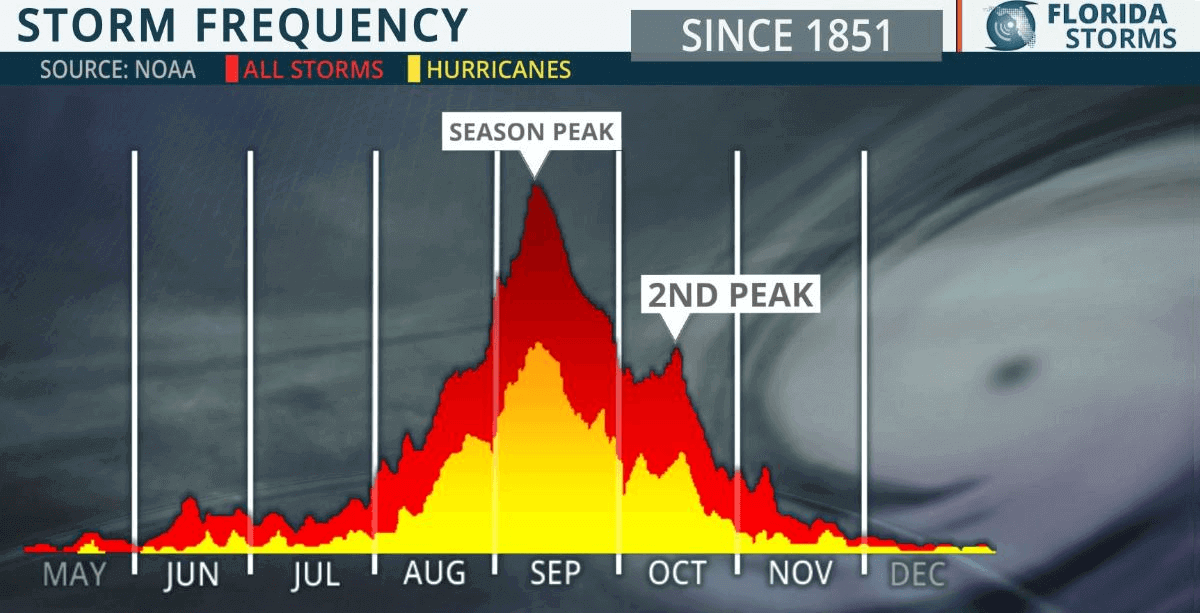 Despite the normally quite high activity in the weeks around the statistical peak of the Atlantic hurricane season, there is also a secondary boost in the activity through mid-October. Indeed activity varies from year to year. It depends on various factors such as how warm the oceanic waters are, how is the global circulation (e.g. having El Nino or La Nina), and others. 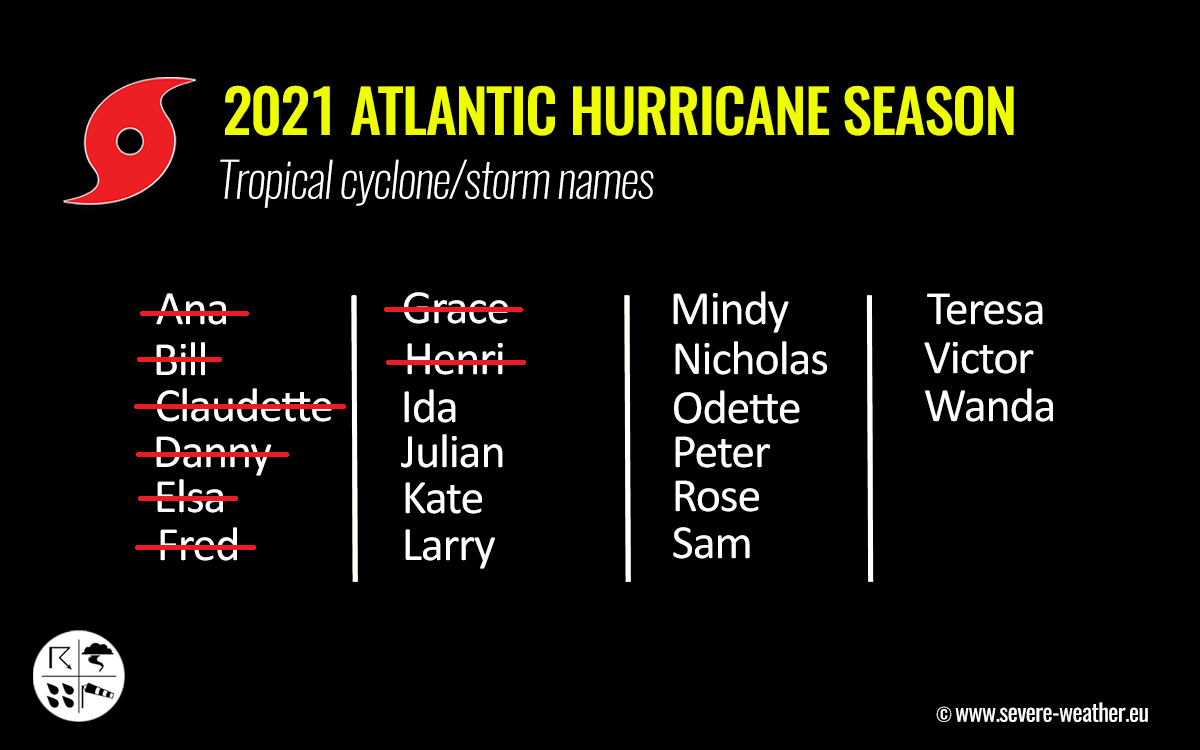 But soon after an almost a one-month-long period of no tropical activity in the Atlantic Basin, the activity has significantly ramped up as we entered mid-August. This is due to the very warm sea waters coinciding with an MJO wave* aloft coming from the west.

They are very warm across the Caribbean region, most of the tropical Atlantic, the Gulf of Mexico, and along the East Coast. Temperatures are ranging from around 30 °C in the northwestern Caribbean around Cuba, up to almost 32 °C (90 °F) across most of the Gulf of Mexico. Also low 30s between Florida to Carolinas coast, especially where the Gulf Stream is meandering. 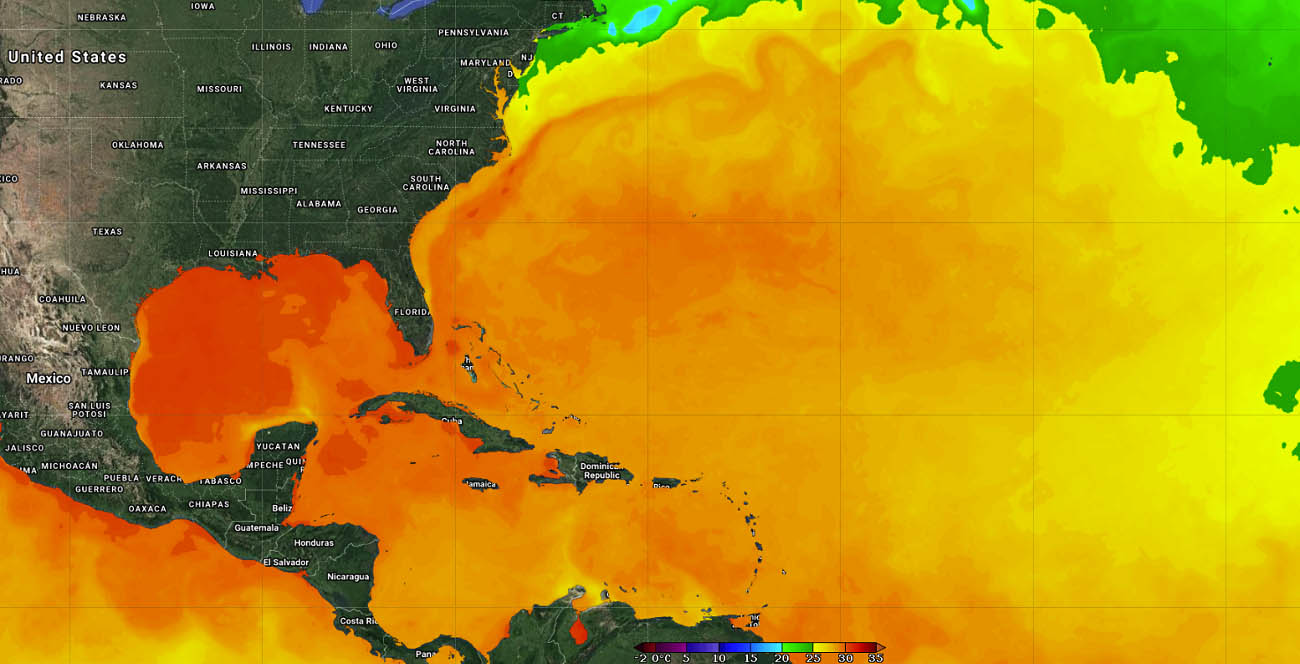 The oceanic waters this warm often lead to explosive development, and tropical systems could become very dangerous. The anomalously warm waters are a warning signal for the upcoming tropical systems that will develop and travel into this part of the tropical region.

Ocean waters are much warmer also across the so-called MDR region (Main Development Region). A part of the tropical Atlantic between the Caribbean Sea on the west to Africa on the east. Note that most of the tropical cyclone formations normally occur in the MDR region. 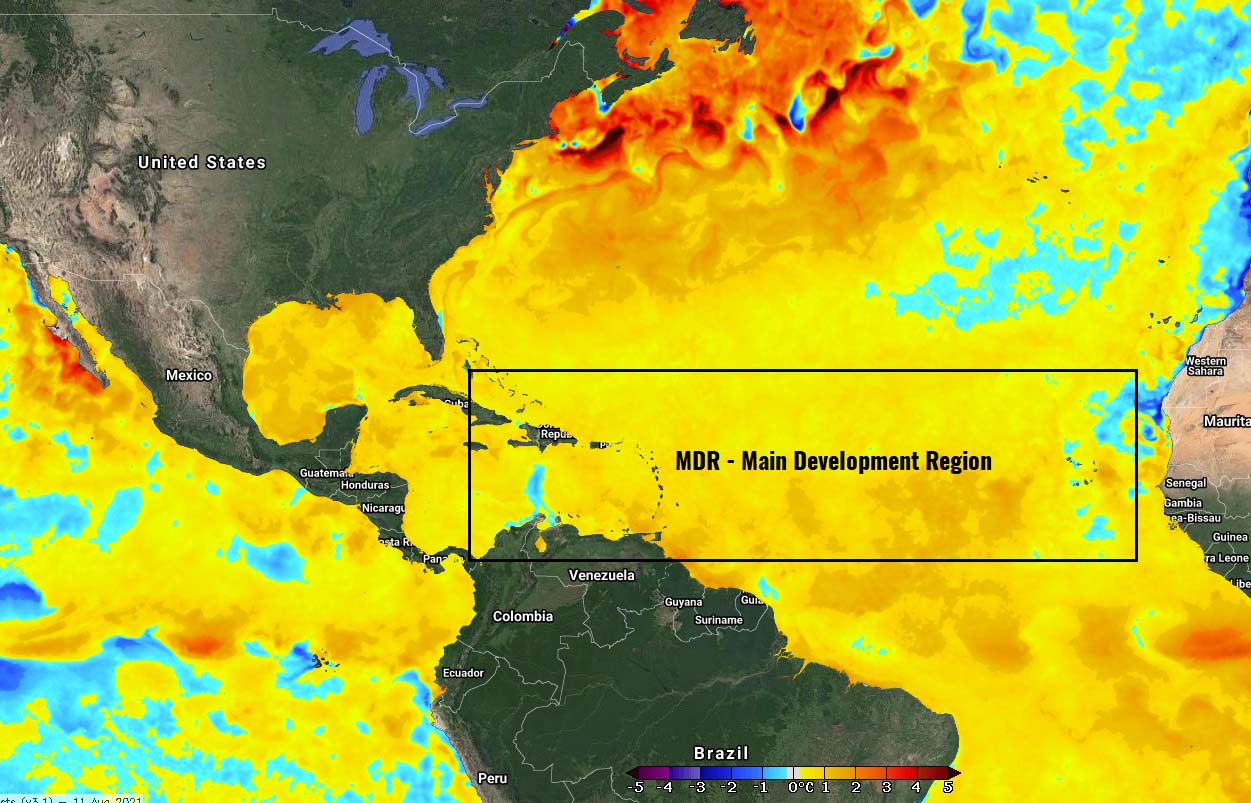 High-temperature anomalies can show us that there is strong support for potentially very significant tropical cyclone development in the coming weeks as the Atlantic Hurricane Season will be around its peak.

According to the recent weather model trends, these high sea temperatures will likely further improve in the coming weeks as we head towards the peak of the season. These temperatures that we can find in August are also quite a typical sign when an active season follows during the fall months.

This August, these warm Atlantic waters very well combined with a deep MJO wave aloft and boosted the tropical activity. The wave has emerged into the Caribbean region and the Atlantic Ocean from the west and was a direct booster for all the Tropical Storms, Fred, Grace and Henri. much improved upper-level conditions allowed these systems to initially form and then significantly strengthen. 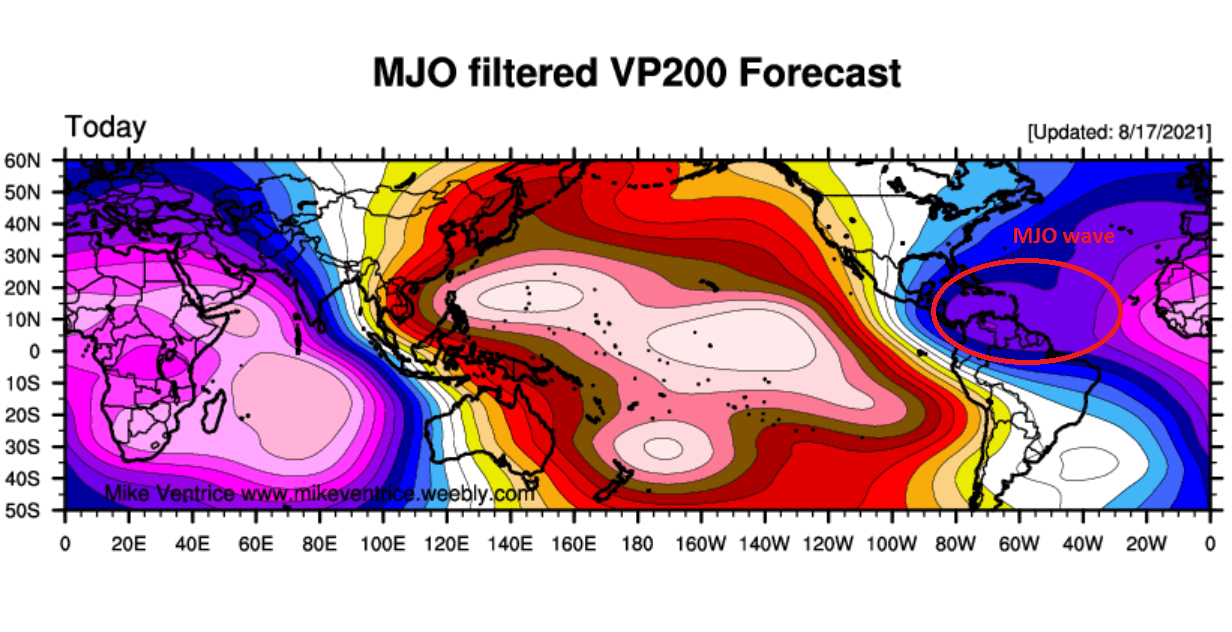 The chart above, provided by Michael J. Ventrice, is showing the MJO wave** with filtered VP200 anomalies. The VP – Velocity Potential is an indicator of the large-scale divergent flow aloft over the tropical region. The blue colors support the tropical cyclone development, the red colors limiting them.

** The MJO wave is an atmospheric wave that we know as the Madden-Julian Oscillation, moving from west to east across the tropical region. MJO has a major influence on the state of the atmosphere which allows tropical cyclones to develop. It circles the Earth in about 30 to 60 days.

When an MJO overspreads part of the tropical region, the general patterns develop a low wind shear environment that leads to more favorable conditions for tropical cyclone development or boosting the existing storms.

Tropical Storm Henri – soon upgraded into a hurricane, could bring a greater impact to parts of New England, U.S. this weekend, as the odds are very high that Henri’s landfall will be of hurricane strength. When Henri crosses the warm pockets of the Atlantic seawater where the Gulf Stream is flowing, it could ramp up its intensity significantly.

As the water temperatures are already warmer than normal, barely anything could prevent Henri’s intensification on Saturday. Very warm waters with around 30 °C (86 °F) near-surface temperature in this part of the Atlantic are giving prone conditions for an even more robust thunderstorm activity that we are seeing right now.

The Infrared satellite imagery clearly shows how explosive nature of storms is with Henri lately, with the cloud tops temperature reaching below -80 °C at time. These deep convective storms are gradually strengthening the system.

Henri is also showing a very impressive and healthy upper-level outflow ventilation, hinting that the environmental conditions remain quite supportive despite still some shear limiting a more robust strengthening for now. But as shear is forecast to be lower along Henri’s track over the weekend, it will become a hurricane on Saturday. 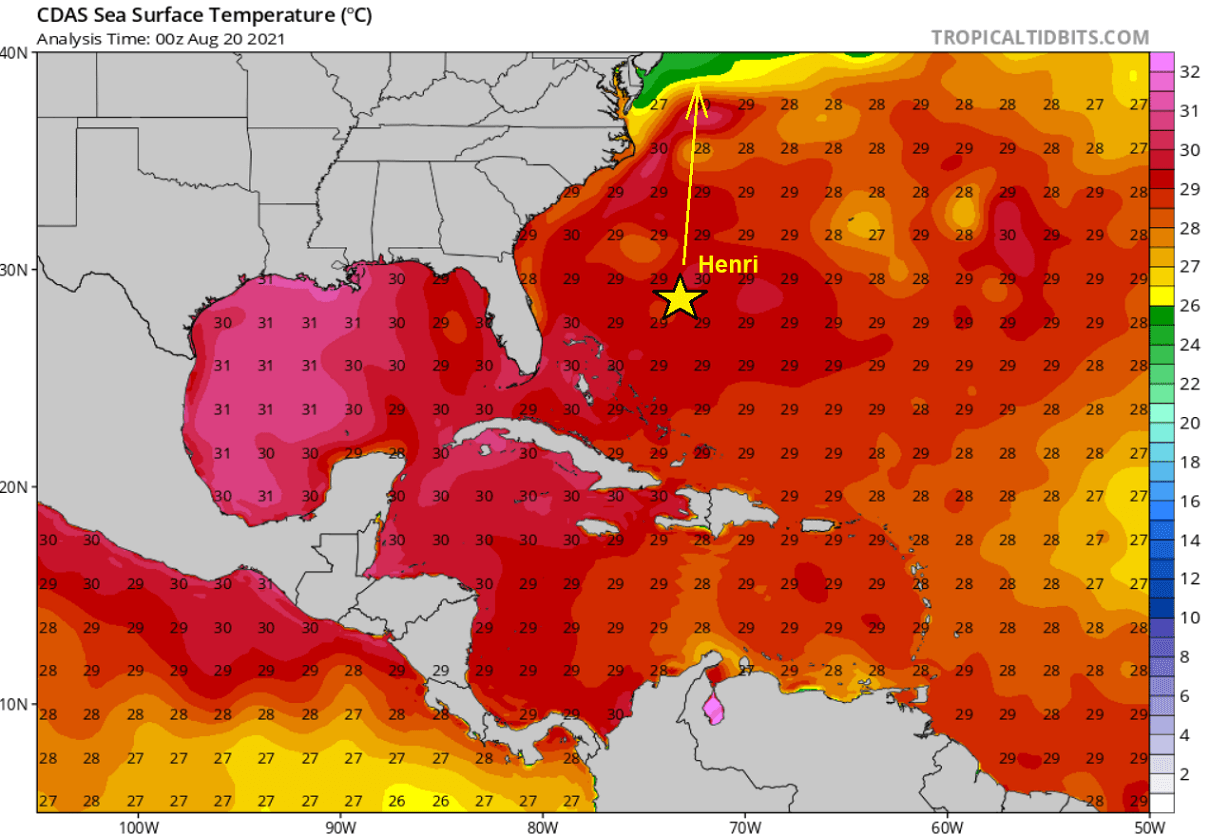 Having both the upper-level support by the MJO wave aloft and the warm Atlantic with the very warm Gulf Stream hints that the environmental and oceanic conditions will be conducive for additional development as hurricane Henri tracks further north towards New England. Keep in mind that the very warm – near 30 °C (86 °F) sea waters within the Gulf Stream are a natural booster of the tropical systems that travel across.

With Henri emerging into a more divergent upper-level wind flow pattern (and less wind shear) along the East Coast of the United States, it will reach hurricane strength on Saturday and continue towards the landfall along the coast of New England, roughly somewhere from Connecticut, Rhode Island, and Massachusetts coast on Sunday.

There are still chances Henri’s center might miss the landfall, but the odds of the 5th landfall of the Atlantic Hurricane Season 2021 remain much higher for now. Conditions are surely needed to be monitored once Henri reaches hurricane strength again on Saturday.

Regardless of the intensity of hurricane Henri, if making landfall or just passing very near the coast of New England, there is an increased risk of potentially significant winds, heavy rainfall with floods, and especially a destructive storm surge threat along portions of southern New England and eastern Long Island on Sunday.

The worst impact will likely be severe damaging winds and storm surge to the immediate east of Henri’s center. For this reason, portions of Long Island, Connecticut, Rhode Island, and southeastern Massachusetts are already under the Hurricane and storm surge watches. And Hurricane Warnings will be needed.

The above comparison chart is showing weather models NAM, ICON, and ECMWF with the potential with swaths where the core of hurricane Henri will travel. The most robust solution is done by NAM and ICON, both forecasting that Henri would make landfall at Long Island or very near. The ECMWF solution pushes the potential landfall farther east, along the southeastern Massachusetts coast.

Since the exact landfall point is yet to be determined, it is hard to say how much rainfall could fall across the southern portions of New England. 5-10 inches are indeed possibly across a wider area, but Henri’s evolution has to be closely monitored over the weekend. 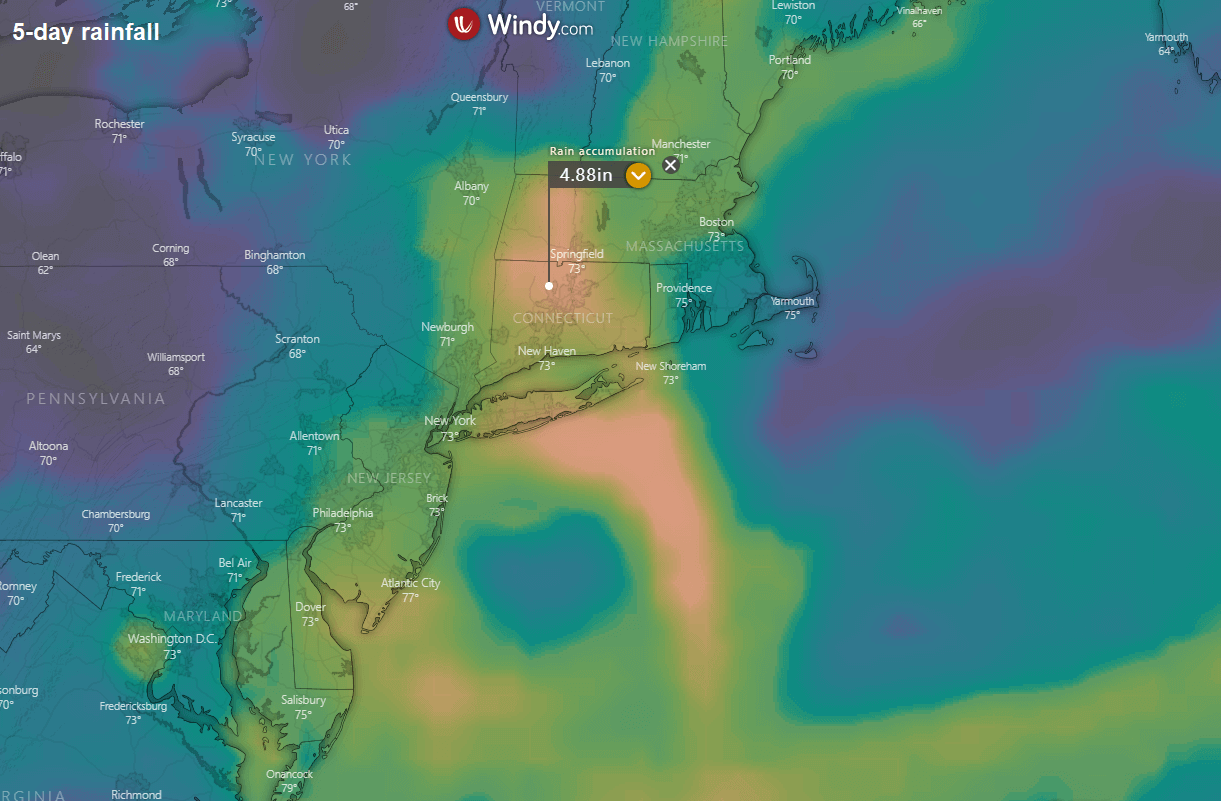 Also, note that the waters in the tropical Atlantic remain very warm, and with the MJO wave now gradually moving towards the central and eastern Atlantic, it could soon generate new tropical disturbances and potential new tropical storms for this Atlantic Hurricane Season.

The ensemble models do hint at one or even two systems that could be brewing on the eastern Atlantic in the coming days. We are surely monitoring the conditions further and will update the forecast trends accordingly – stay tuned.