The Atlantic Hurricane Season 2021 is just a few weeks away from its official end on November 30th, but it is not over yet. Over the last couple of days, storm Wanda has formed, becoming the last tropical cyclone name on the 2021 list. On its course to the Azores this weekend, Wanda is then forecast to become an extratropical storm before its remnants reach Ireland early next week.

In a typical Atlantic Hurricane Season, there are names that we follow by forming tropical cyclones from the beginning of June to the end of November. This year is only the third hurricane season in the Atlantic Basin that meteorologists have been left with no names to spare, after 2005 and 2020. The National Oceanic and Atmospheric Administration (NOAA) forecast called for 13 to 20 named storms this year, Wanda is the 21st.

At first, the system formed as a subtropical storm over the central North Atlantic, then transformed into a tropical storm while gradually moving east-northeast towards the Azores this week. It’s been active for almost 14 days since its birth and its remnants are likely to visit the western parts of Europe in the coming week. 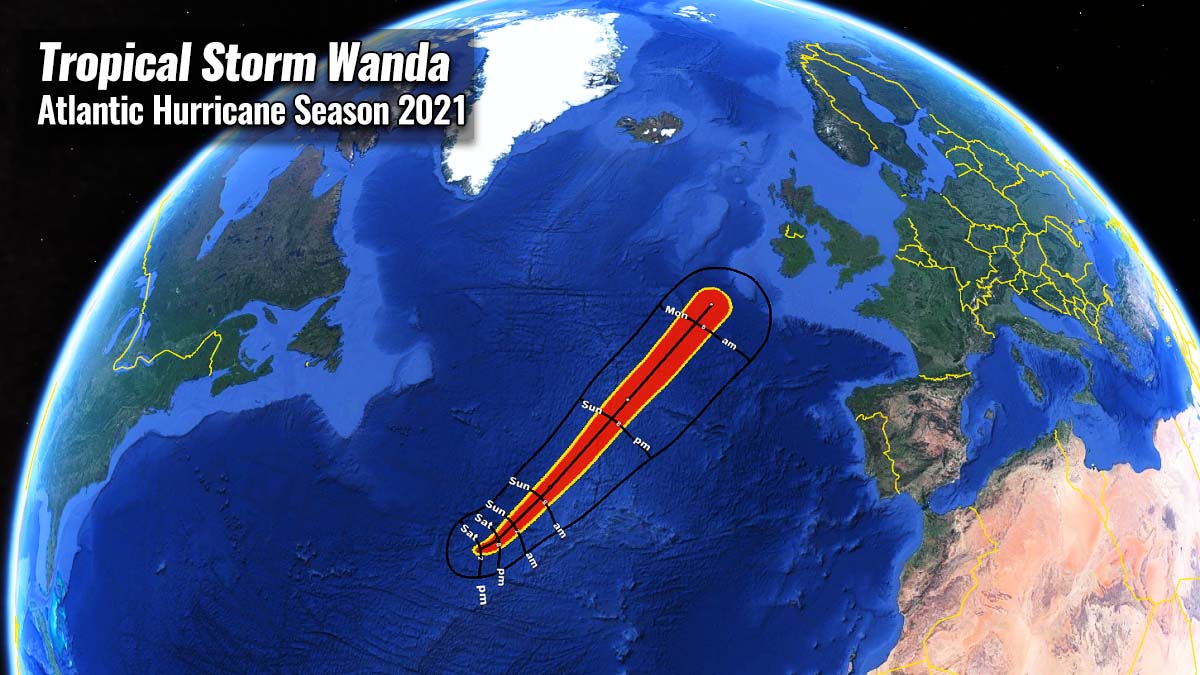 Wanda is the first named storm since Hurricane Sam in early October, and could strengthen slightly over the weekend and is expected to become an extratropical cyclone before reaching Ireland.

The much above normal waters of the Atlantic Ocean have been persisting since spring this year, so the tropical cyclones during the period of hyperactivity this Hurricane Season 2021 were forming one by another. Despite the sea remaining much warmer into October and November, the activity was shunted down recently.

Tropical Storm Wanda is, however, the 21st system of the Atlantic Hurricane Season 2021 which means there are now no names left from the designated tropical cyclone list. A supplementary name list of tropical cyclones will be needed until the official end of the season, if/when the next system forms.

The Atlantic Basin sea surface temperatures (SST) have warmed up a lot throughout the spring and summer months and remained extremely warm during the hurricane season this year. Many areas had surface seawater temperatures even rising into the low 30s °C.

The recent temperature anomaly analysis indicates that the Caribbean region is still into the upper 20s to low 30s this early November. Generally, the Atlantic Basin has anomalously warm waters, even extreme in places, especially across the tropical Atlantic. 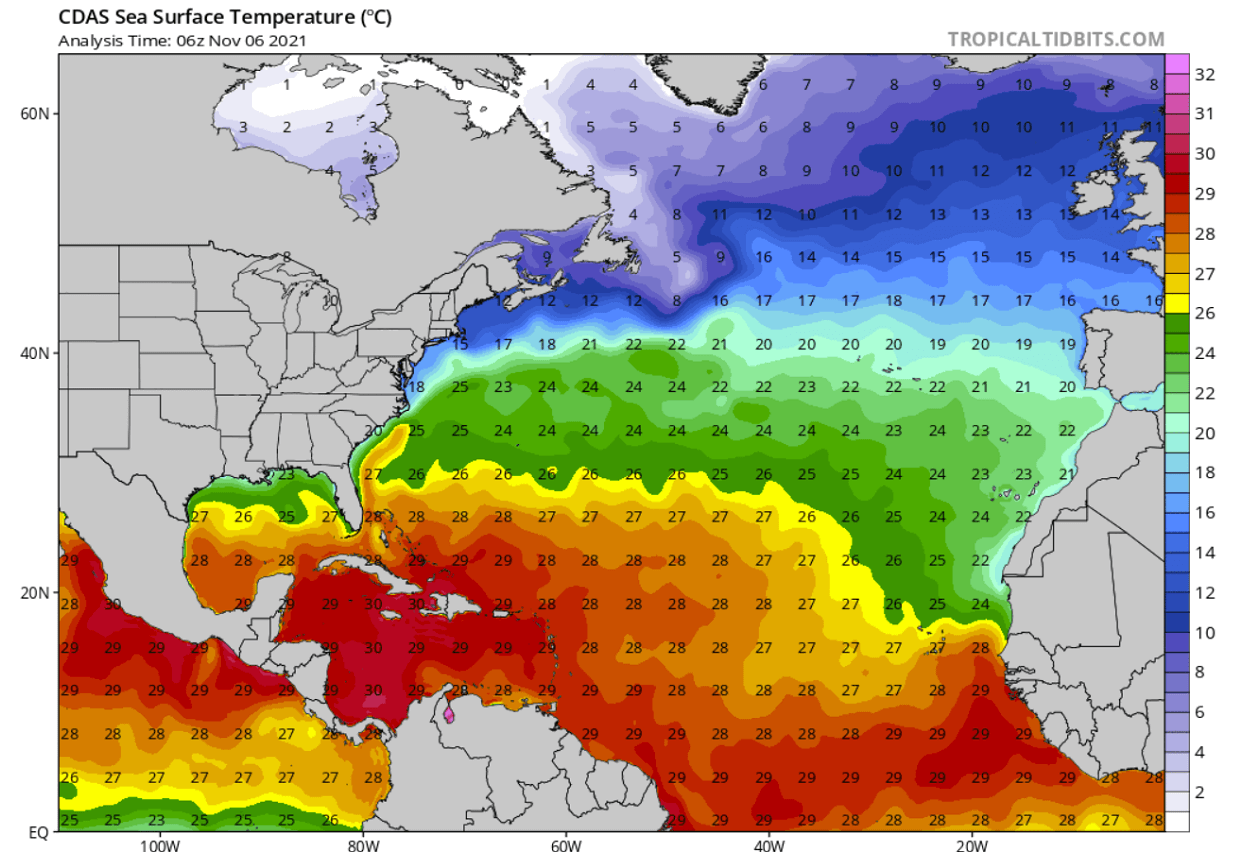 The warmest sea waters are spread around the central American countries, but also around Cuba, southern Florida, the Bahamas, and most of the southern Gulf of Mexico. Temperatures in these areas are ranging from around 27 to 29 °C, but are already colder further east into the open Atlantic where Tropical Storm Wanda is located. Wanda formed in temperatures around 25-26 °C, a borderline threshold for tropical development.

Note, that seawater temperatures this warm as we can observe in the Caribbean region right now, often lead to the very rapid explosive development of dangerous tropical cyclones during the peak and late of the Atlantic hurricane season. The 2020 activity during October and November was such an example. As convective storms associated with tropical cyclones fuel warm water conditions and intensify the system. 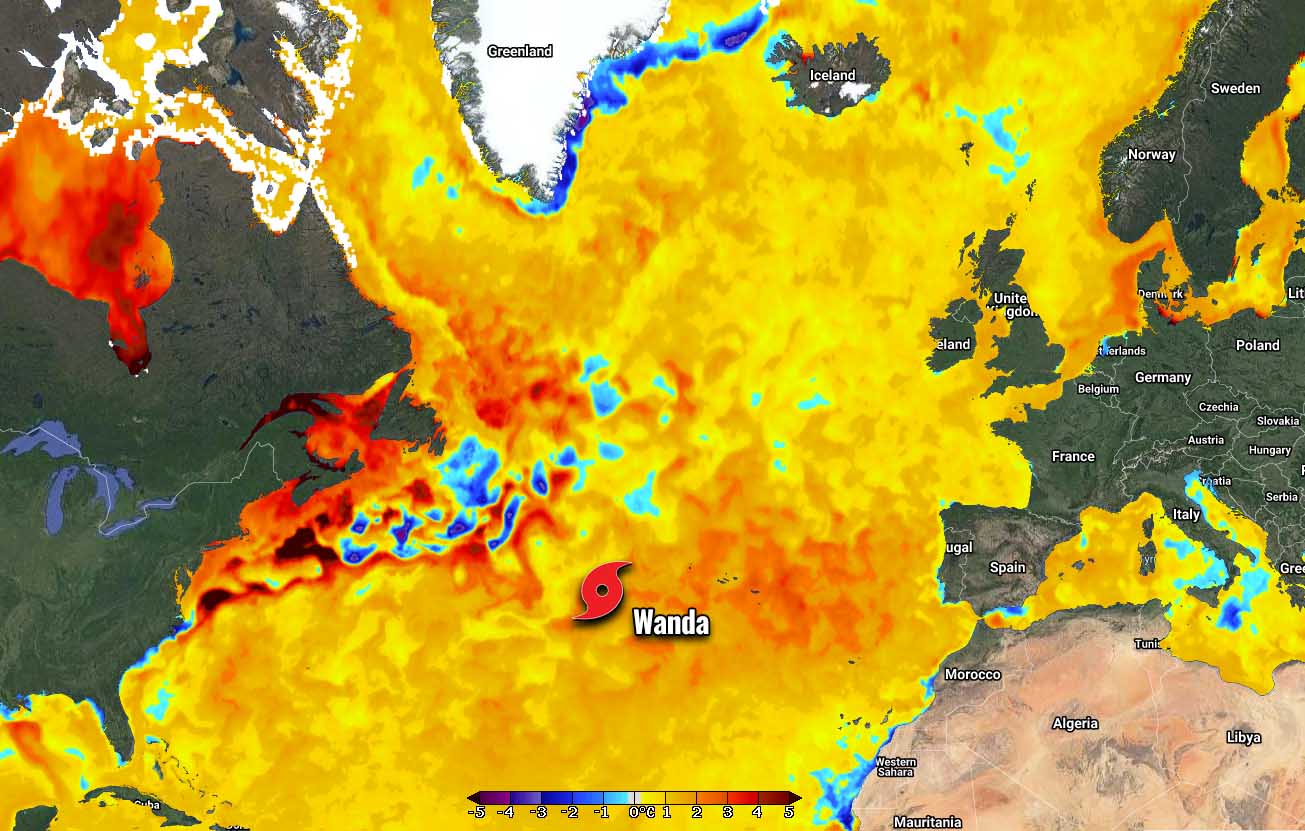 Seawater temperatures around the Azores and the ongoing storm Wanda are a few degrees warmer than normal, but those are of a similar anomaly also across the whole North Atlantic and around western Europe.

As we can also see from the SST chart above, there still is anomalously warm water this Atlantic hurricane season across the MDR region (Main Development Region). A part of the tropical Atlantic Ocean that is virtually extending between Africa and the Caribbean Sea – a region where the majority of the tropical cyclone formations normally occur, and track towards the Caribbean and the United States.

Without the support from the upper levels, the warm SSTs are not enough. That is why we also track the atmospheric waves in the tropical region, especially the Madden Julian Oscillation or an MJO wave.

Let us first talk about the basics of the MJO wave… what is this wave so important large-scale feature for the activity during the Atlantic Hurricane Season?

The weather activity across the tropical region is in general quite different from the mid-latitudes or the polar region. Mid-latitudes have cold and warm fronts, while the tropical regions do not have such activity as the weather mostly combines a convective weather activity (e.g. thunderstorms) within the large-scale pressure and wind patterns variability. And a lot of the tropical variability and dynamics are driven by ‘invisible’ wave-like features in the atmosphere. The most important is an MJO wave. 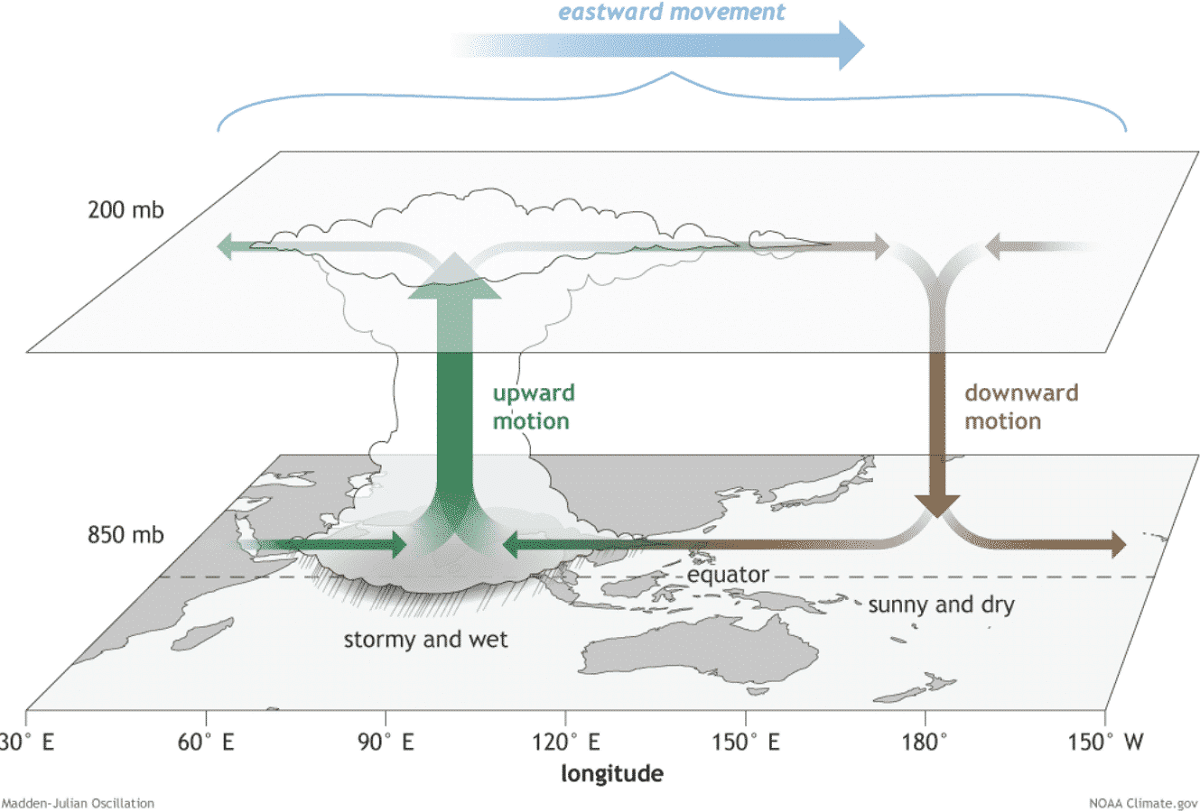 The MJO wave (Madden-Julian Oscillation) is the largest and the most dominant source of short-term activity in tropical regions around the world. This atmospheric wave is a periodical eastward moving disturbance of showers and thunderstorms that circles the Earth in the equatorial region in about 30 to 60 days. The MJO wave has two parts: there is enhanced rainfall (wet phase) on one side and suppressed rainfall (dry phase) on the other side.

The horizontal movement of the air masses is referred to as the Velocity Potential (VP) in the tropical region. Thus it is an indicator of the large-scale divergent flow in the upper levels of the atmosphere. The chart below where we see blue and red colors represent those two sides of the MJO. The blue colors strongly support tropical development, while the red colors lead to suppressing the activity. 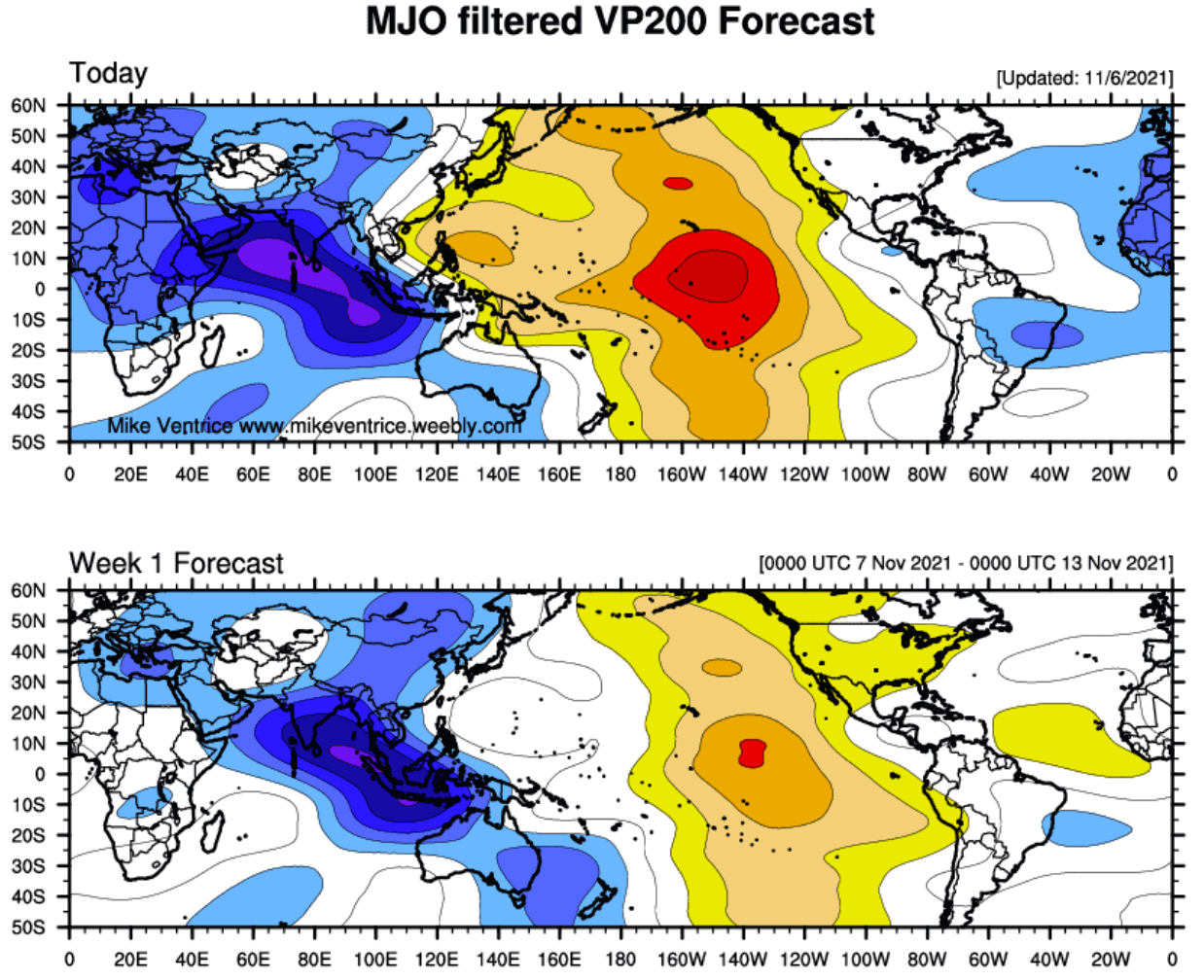 Usually, the most activity while the MJO wave traveling over the Pacific of Atlantic Basin during a Hurricane Season occurs when the deepest part of the MJO is moving away. The chart above, provided by Michael J. Ventrice, reveals the current MJO wave stage with filtered VP anomalies. An MJO wave is moving east from the Atlantic into Africa with its wake side supporting tropical activity over the Atlantic.

As we learned, the MJO wave or the Madden-Julian Oscillation is a very important factor for cyclone formation in the tropical region. It is also important to note that when a region is being overspread by a major MJO wave, it normally leads to a low wind shear environment. This results in more favorable conditions for tropical cyclone development and hurricane activity as strong shear normally limits cyclone organization.

Although the Atlantic Hurricane Season 2021 was forecast to have a combination of a strong MJO wave and very warm seawaters during the month of October, the activity was completely shut down. The circulation aloft was simply not right, as tropical waves that normally take off on the West Coast of Africa were not triggering tropical cyclones since early October.

ATLANTIC HURRICANE SEASON RAN OUT OF ITS NAMES, NEXT SYSTEMS WILL NEED SUPPLEMENTARY LIST OF STORM NAMES

Tropical Storm Wanda has now ended the official list of tropical cyclone names. In the past, there have only been two other years with the W-letter storms in use, those were Tropical Storm Wilfred (2020) and Hurricane Wilma (2005). If more storms will follow in the coming weeks, the use of supplemental names list will be needed. 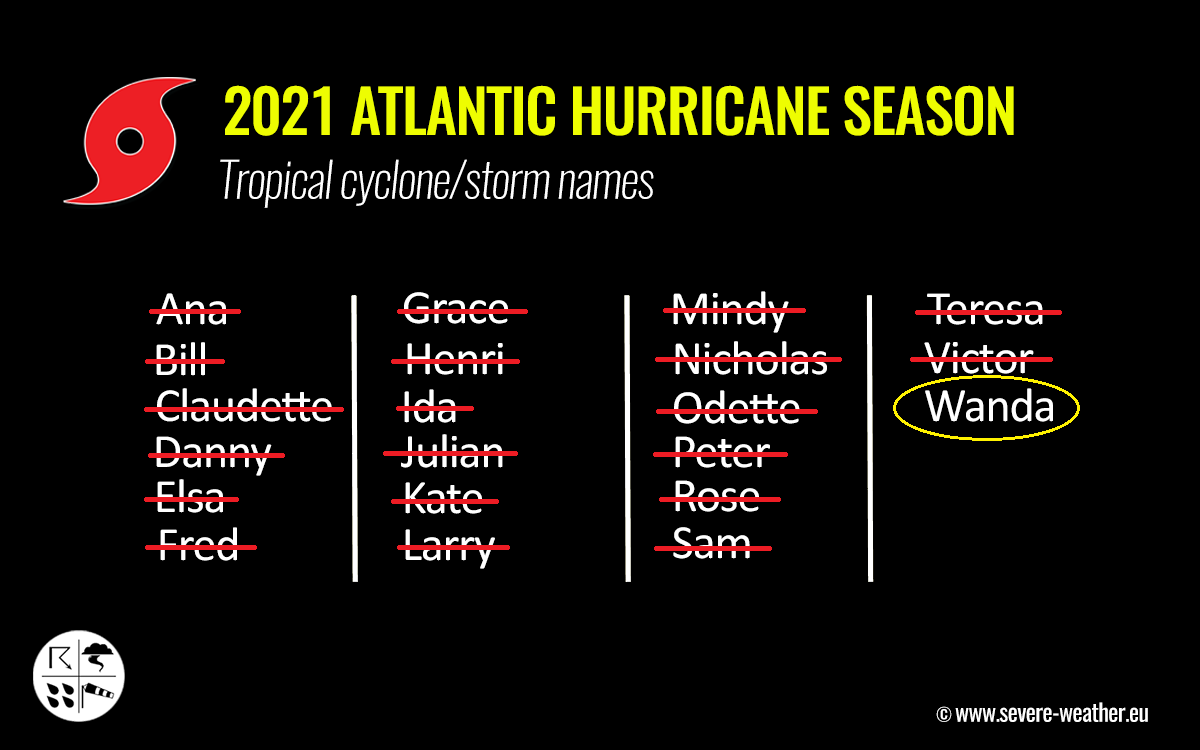 Note, that it would be only the third time we would be seeing this, the extremely active Atlantic Hurricane Season 2020 was such a case, the other was 2005. In the 2020 season, there were a record-breaking 30 named storms which included 6 major hurricanes, and the use of Greek letters came into play.

There have been seven hurricanes and 4 major hurricanes (Grace, Ida, Larry, and Sam). Although the official end of Hurricane Season 2021 is approaching fast, there is no guarantee Wanda will be the last storm in the Atlantic this year. 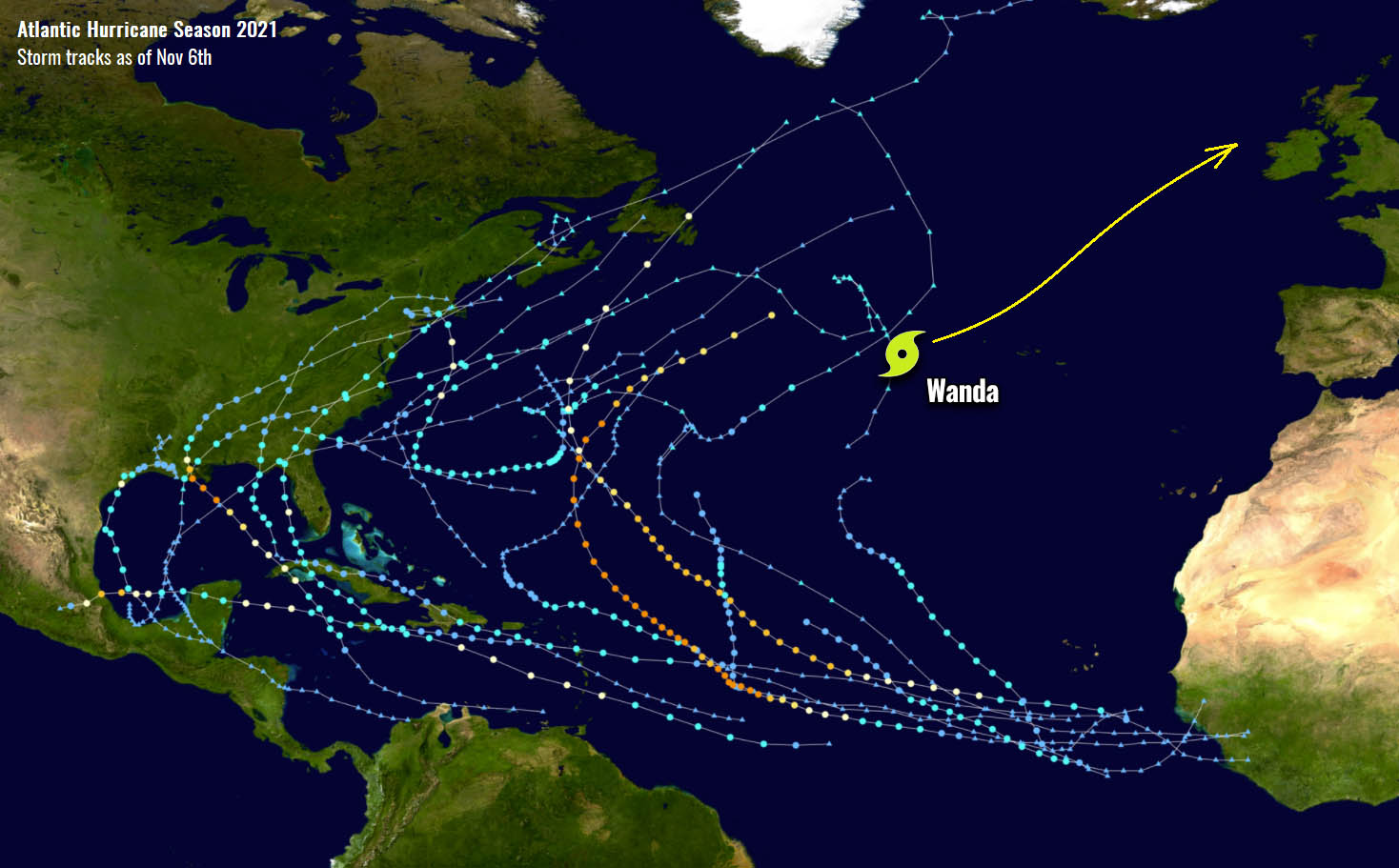 Now, we could soon be entering uncharted territory with this year’s Atlantic hurricane season names. So this would happen for the second year in a row. The mid and peak time of the hyperactive period in the tropical Atlantic has brought the names up very high, but the low period in the recent weeks has slowed it down. Nevertheless, the seasonal statistics are still above normal.

After the Atlantic Hurricane Season runs out of names, we use a supplementary list of storms. This list has been predetermined by the World Meteorological Organization (WMO) in spring 2021. 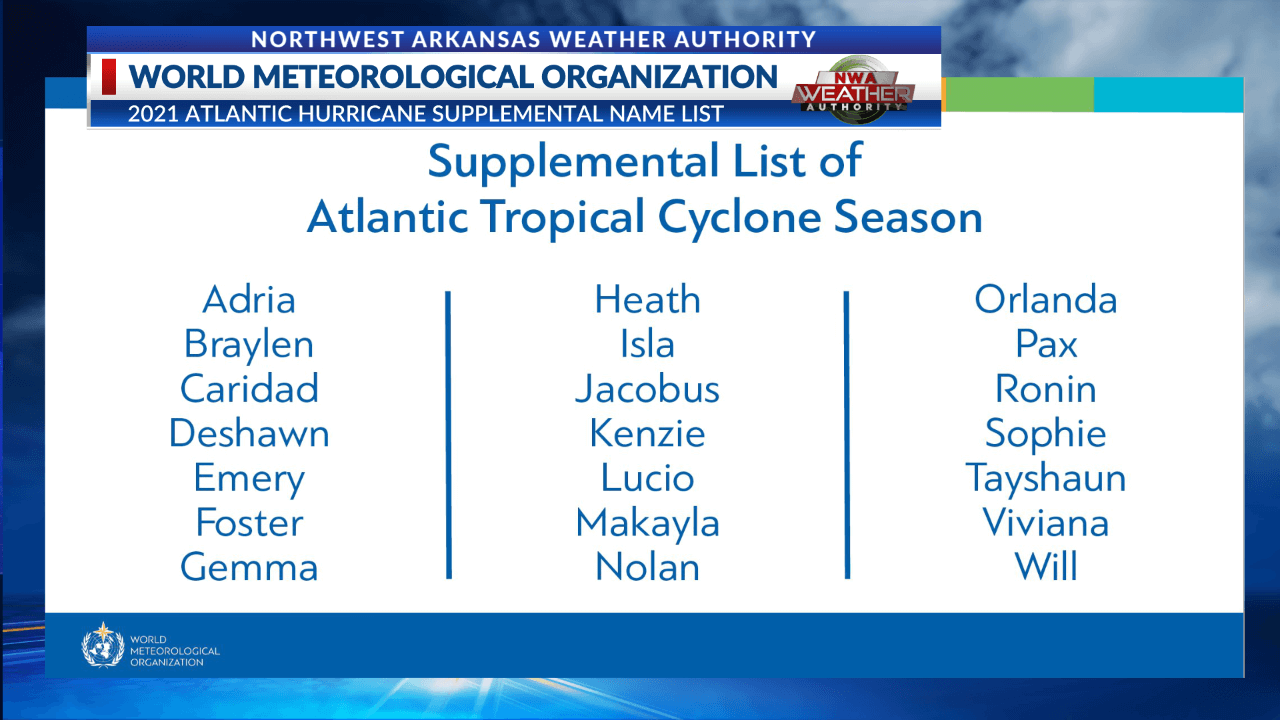 The important change from the past is that these new supplementary names will be given additional more friendly named storms, rather than using Greek alphabet letters.

The Atlantic Hurricane Season has been collecting tropical systems so fast this year, that we were not far behind the record-breaking year 2020 bac in early October. The activity has then stopped, but the statistics remain above normal despite this 4-5 weeks break. But the number of storms is not all we collect when we compare seasons together, we also use a so-called ACE index. 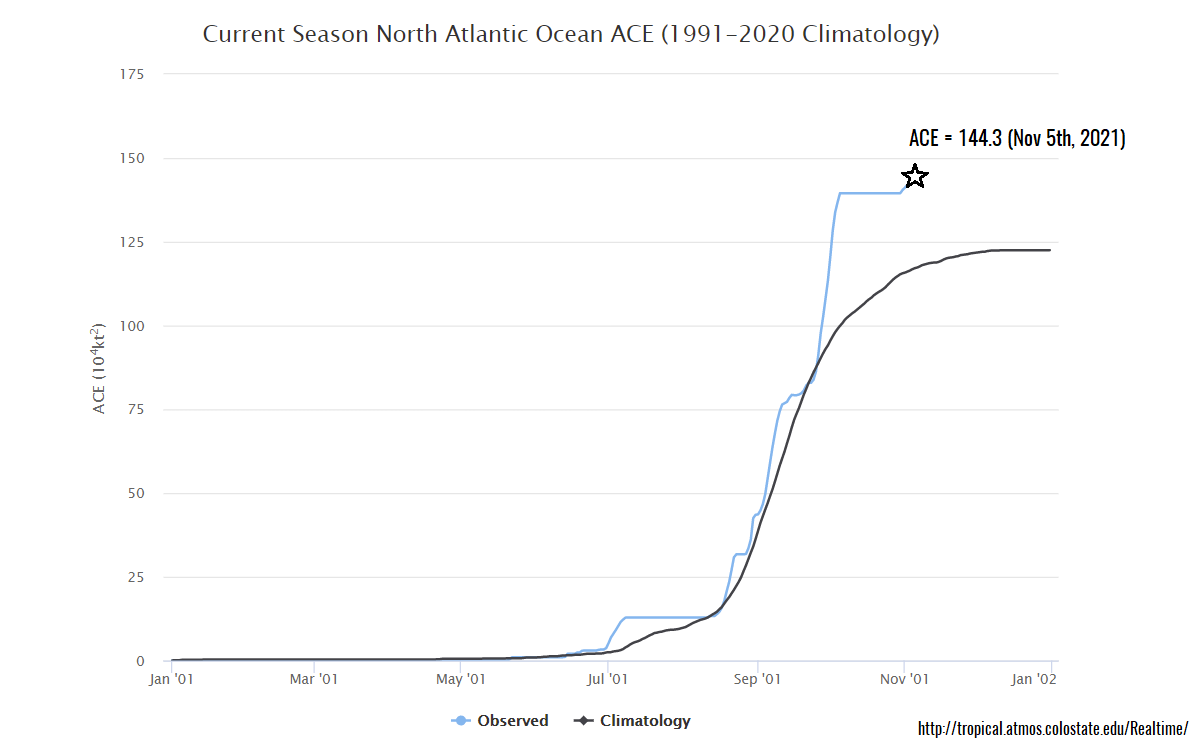 ACE, the abbreviation for the Accumulated Cyclone Energy, is a metric that is used to express the energy used by a tropical cyclone during its lifetime. ACE simplifies the comparison of every tropical storm or hurricane with the other, no matter where it forms.

As of November 5th, more than 144 ACE has been accumulated by all the 21 named tropical cyclones in the Atlantic Hurricane Season 2021. The highest ACE was collected by the major and long-lived hurricane Sam, 53.8 ACE. Hurricane Larry added 32.8 of ACE after 11 days of the system being alive in the Atlantic.

Tropical Storm Wanda has so far contributed with an ACE of 5.3.

Back on October 24th, the National Hurricane Center (NHC) began monitoring a non-tropical disturbance just off the East Coast of the United States which was soon becoming a strong low-pressure system, known as the Nor’Easter, moving along the Atlantic Coast in the final days of October.

When the system ejected into the open Atlantic, it acquired subtropical characteristics on October 31st and was given the name Wanda. The final tropical cyclone from the list of names was therefore designated for the Atlantic Hurricane Season 2021. 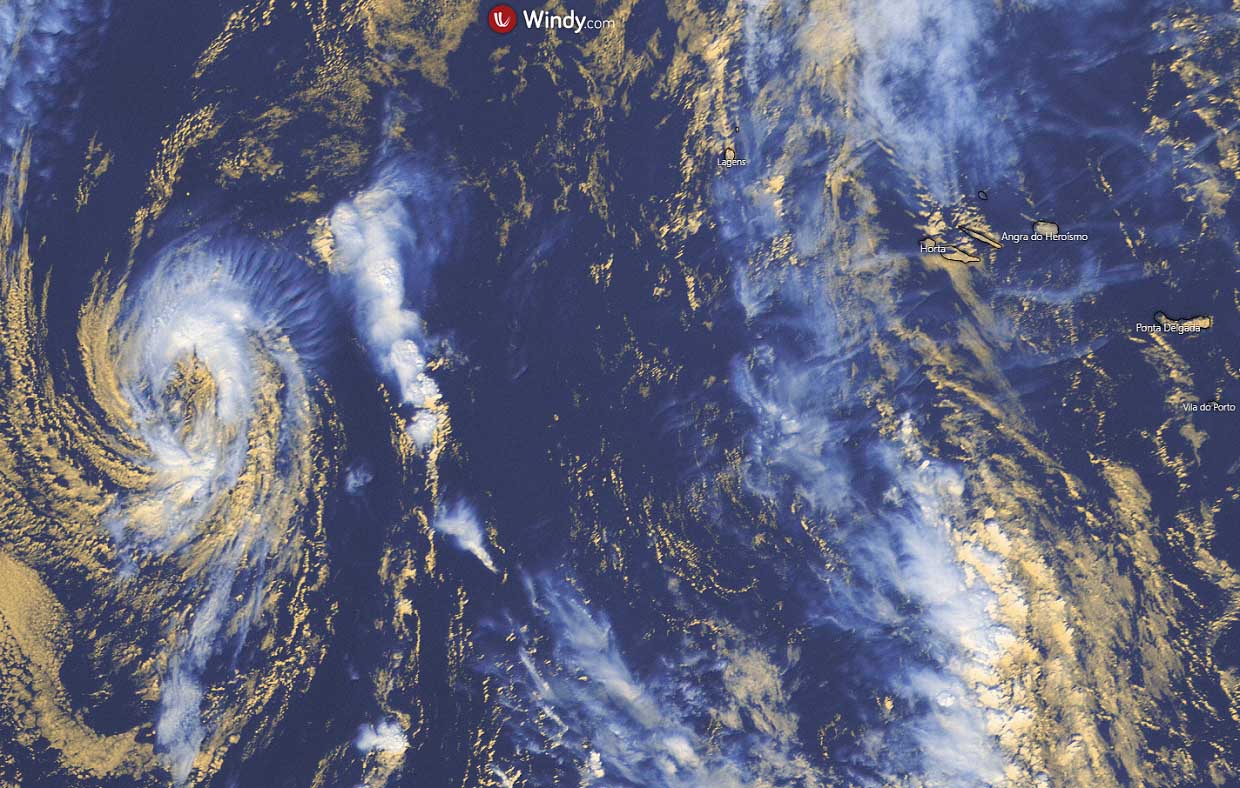 Satellite imagery indicates a band of convection near the center in the northern semicircle with a bit more isolated convective cells elsewhere near the center. It keeps supporting tropical characteristics. There is a large mid-latitude low-pressure system approaching Wanda from the west-northwest, which should cause the tropical cyclone to turn northeastward Saturday night. 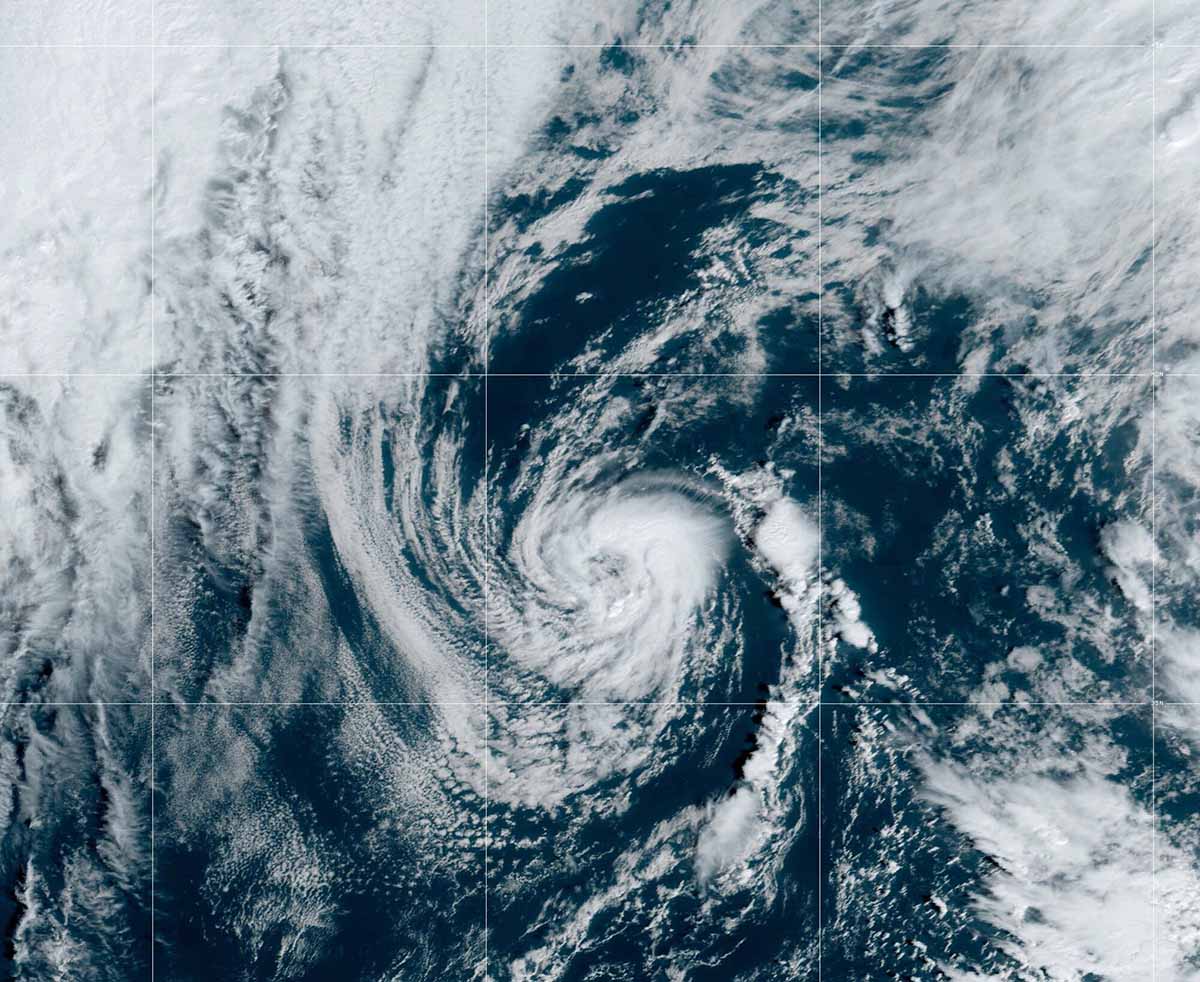 Wanda is expected to gradually merge with a cold front associated with a newly developing deep North Atlantic depression farther north and become an extratropical low through Monday.

On Sunday, Wanda is expected to accelerate toward the northeast, approaching western Europe, precisely Ireland, and Scotland. 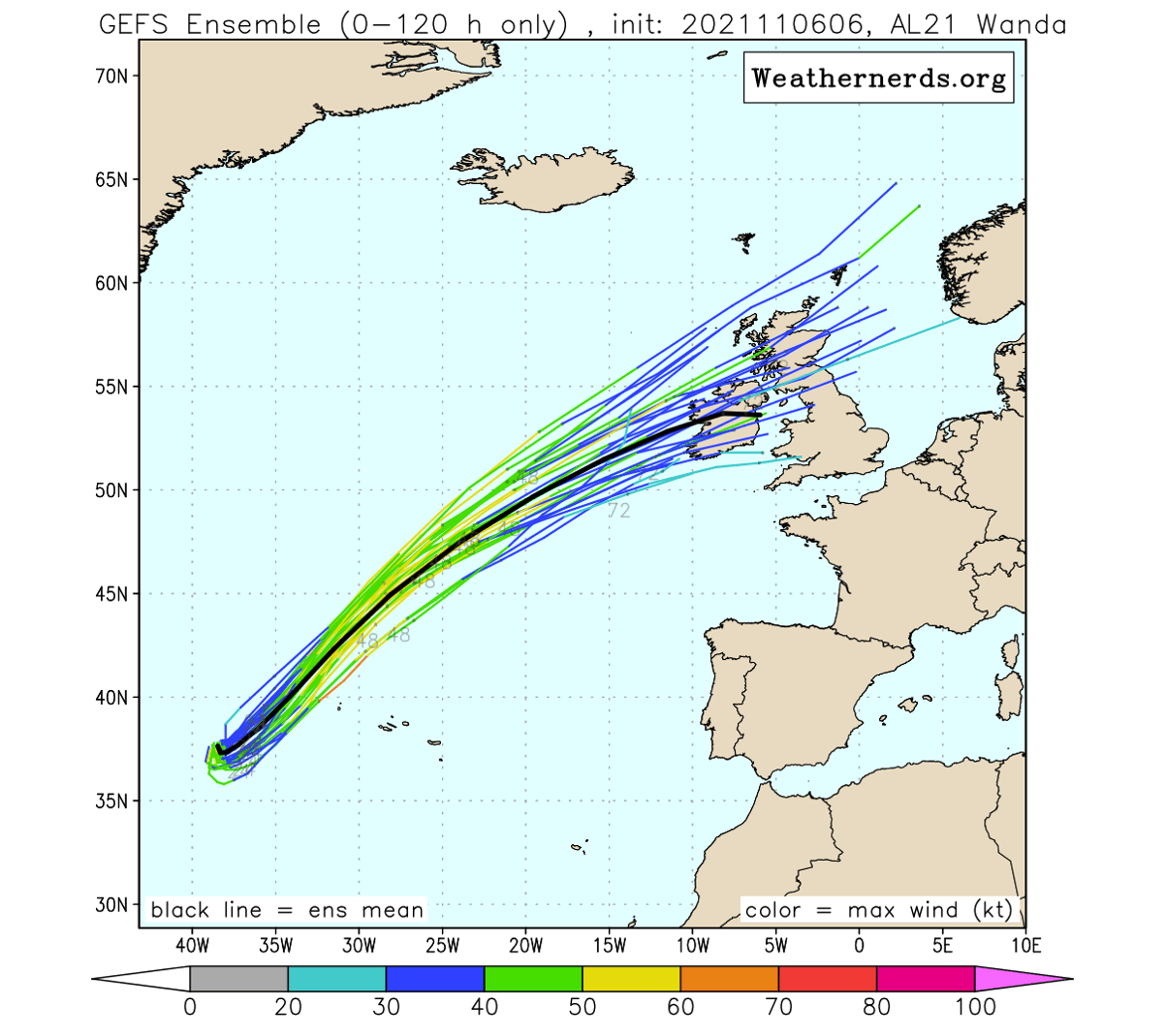 While it might not be particularly severe, winds impact from the tropical origin of the system needs a close watch on Monday and Tuesday.

WANDA IS FORECAST TO BECOME EXTRATROPICAL LOW, HEADING TOWARDS IRELAND AND SCOTLAND EARLY NEXT WEEK

A tropical storm Wanda is soon on the way towards Europe, the second system of the Atlantic Hurricane Season that has come so far east in the Basin, closing in the European continent. The other system was major hurricane Sam which impacted Iceland in early October. 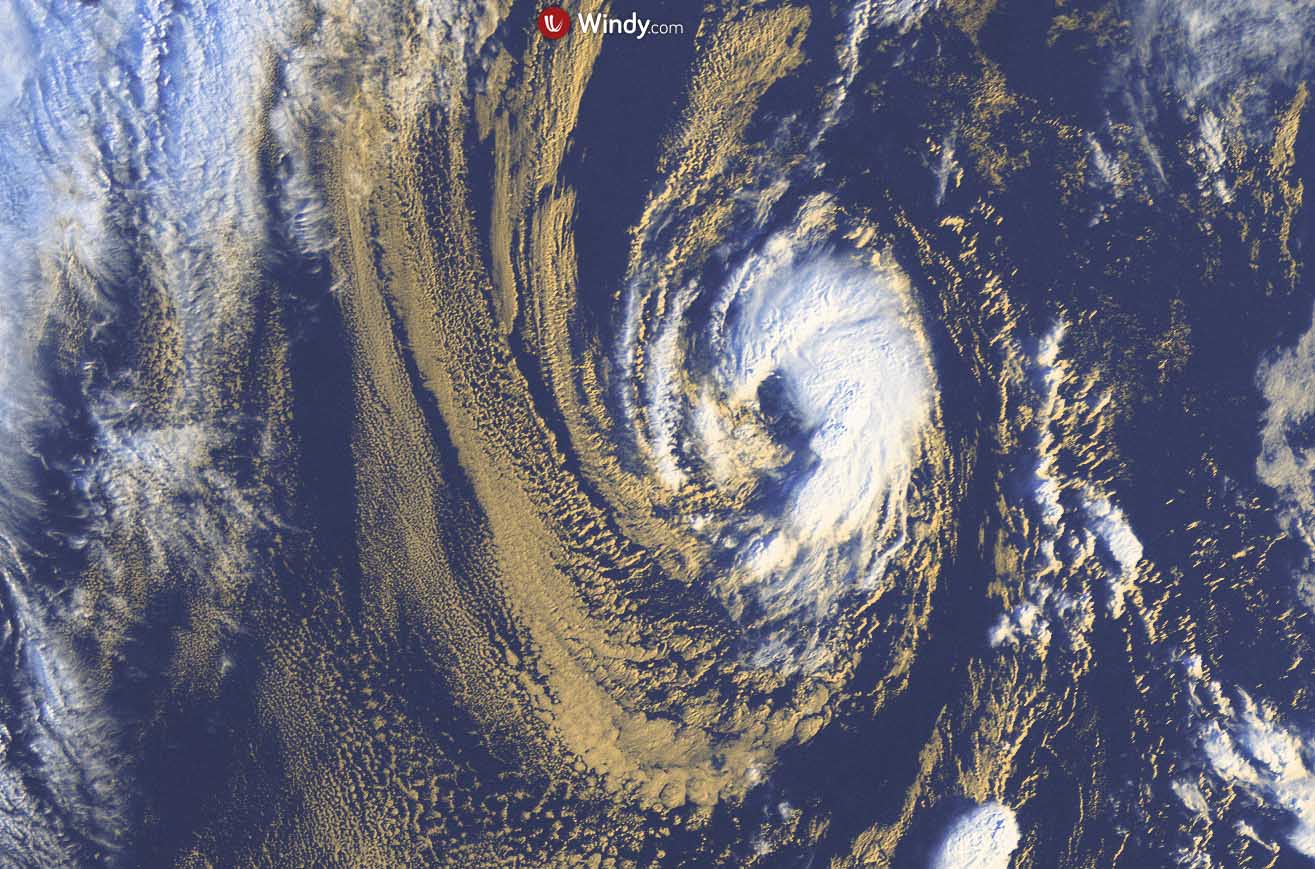 Wanda or its remnants will turn towards the UK and Ireland on Monday, bringing rain and strong to severe winds with cold weather as conditions become unsettled over the next few days. The remnants are possible to affect the west of Ireland and Scotland.

After its transition into an extratropical low on Sunday (night) while passing just to the north of the Azores, Wanda will accelerate northeast. The earliest reasonable time it reaches western Europe would be late Monday. 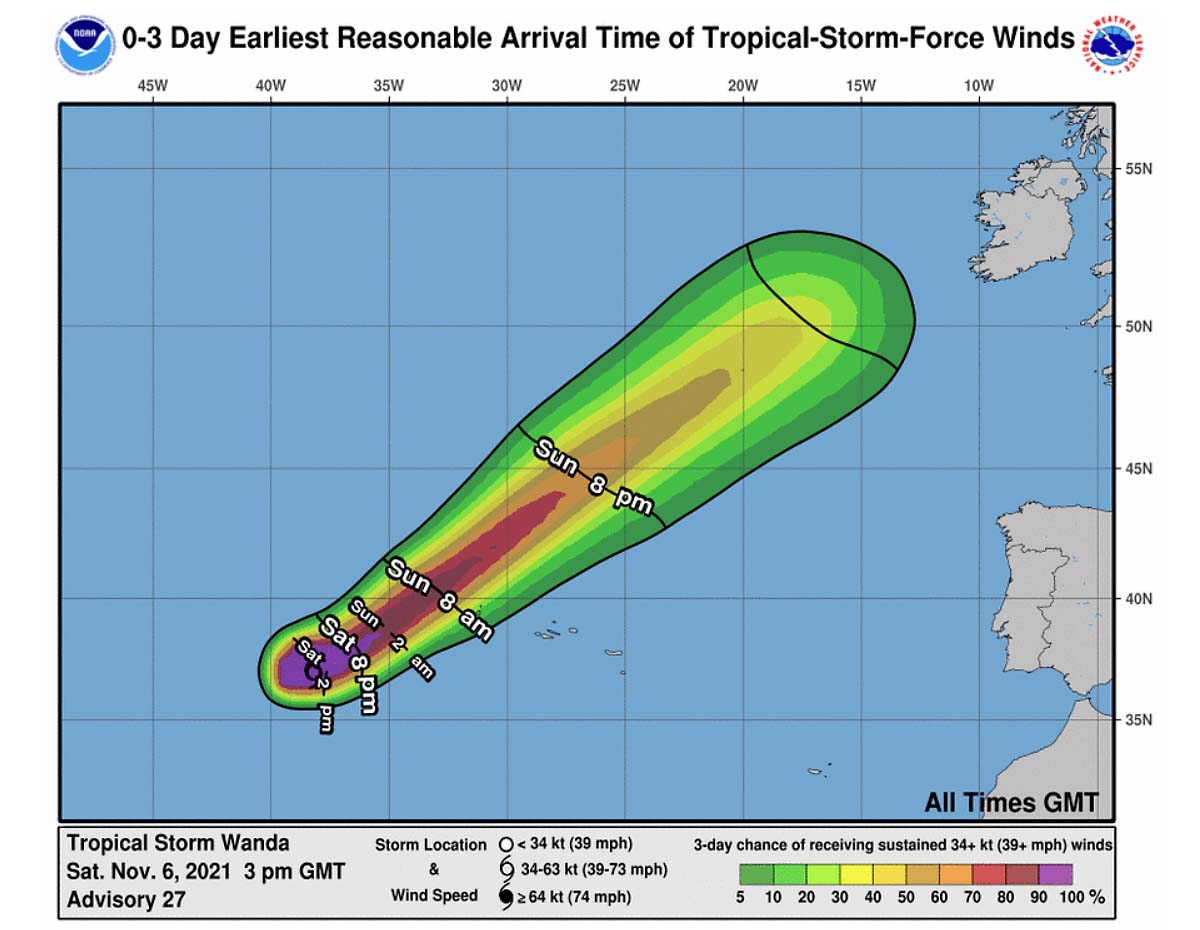 While Wanda may bring wind and rain to the western half of Ireland, the much more intense North Atlantic low is seen farther north. The system will have deep central pressure and powerful winds, thankfully staying over the open waters of the Atlantic. 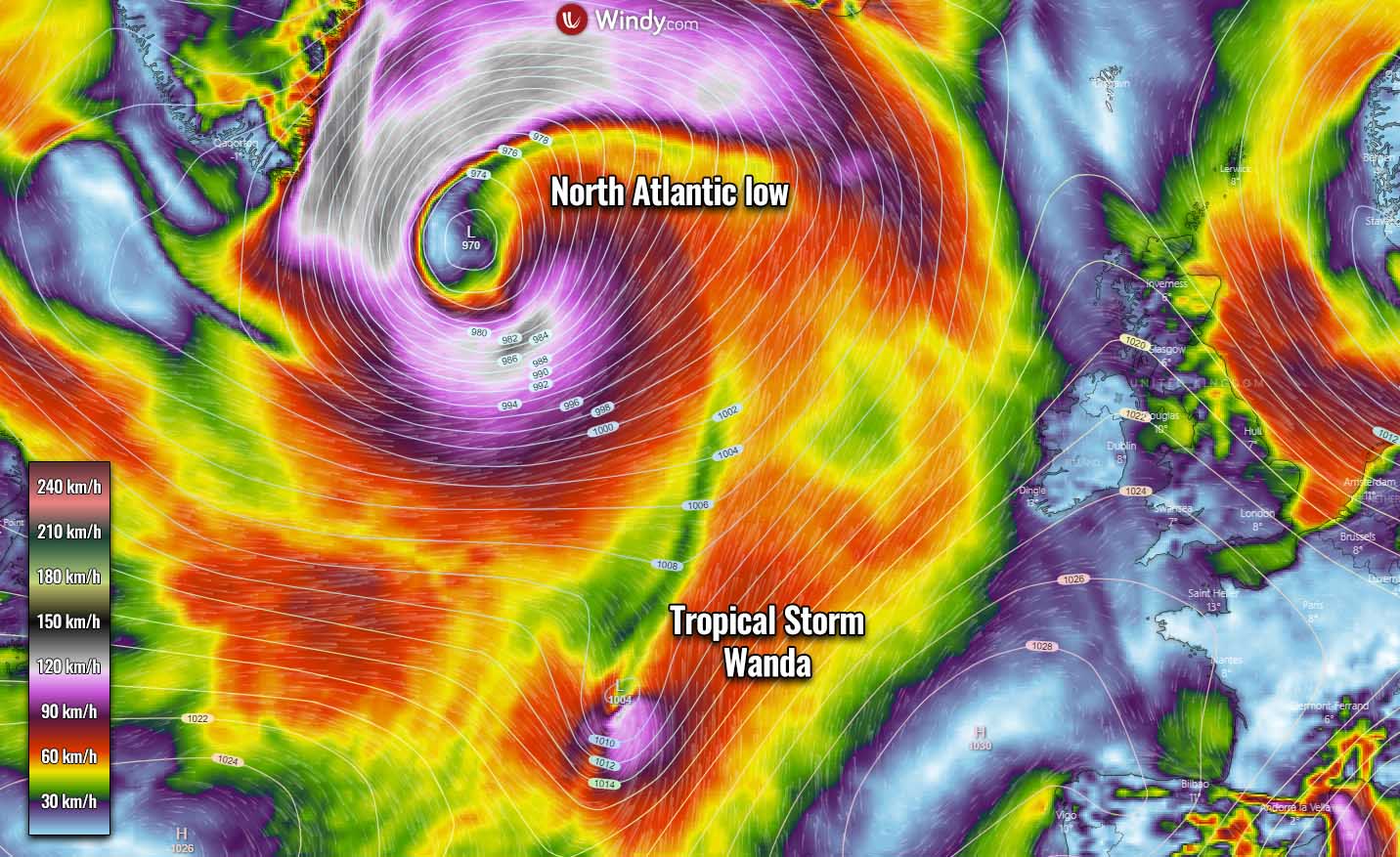 Also, the Met Eireann has noted that the remnants of Wanda are, despite tracking close to Ireland early next week, unlikely to cause many issues for the country.

*** Images used in this article were provided by Windy, TropicalTidbits, and NOAA.