Past summer months have been abnormally warm across the Arctic circle, which caused rapid ice melt, and record low sea ice extent in late July and into early August. Only 15-18th July period was not record low, and was just behind the 2011 values (not shown on the graph below). The absolute minimum is usually in September. The graphic below from NSIDC (National Snow & Ice Data Center) shows 2019 versus 2012, which had the lowest absolute sea ice extent on record in September 2012. Currently, despite having record low days for specific periods, 2019 is not projected to finish lower than 2012, but is projected to be close. But forecasts can change in the coming weeks. The current daily sea ice extent is around 5 million km². 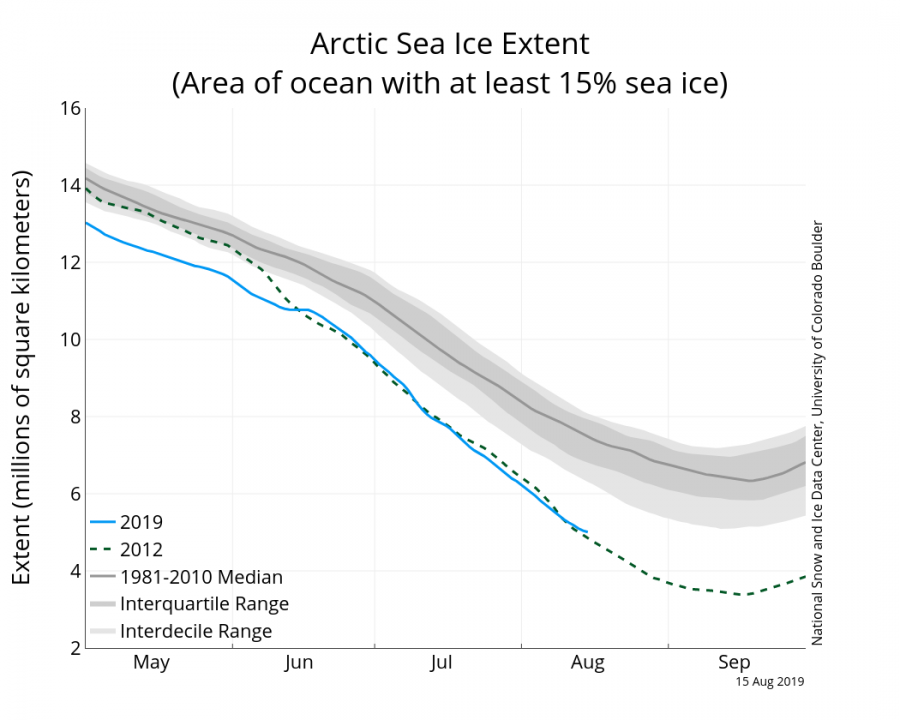 2019 continues the ongoing trend of Arctic sea ice loss, with July 2019 having the lowest sea ice extent on record. Our graphic shows the obvious trend of reducing sea ice extent over the years (coinciding with global rising temperatures) produced from the official NSIDC monthly average data. 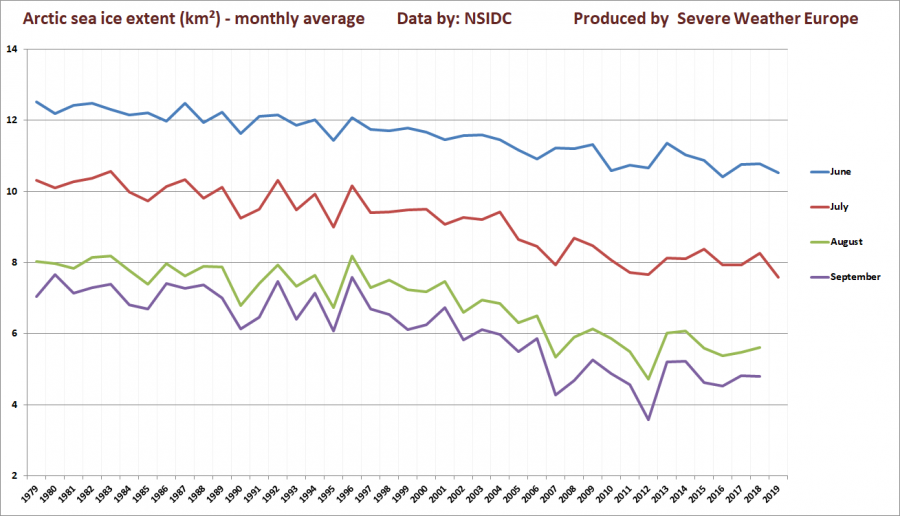 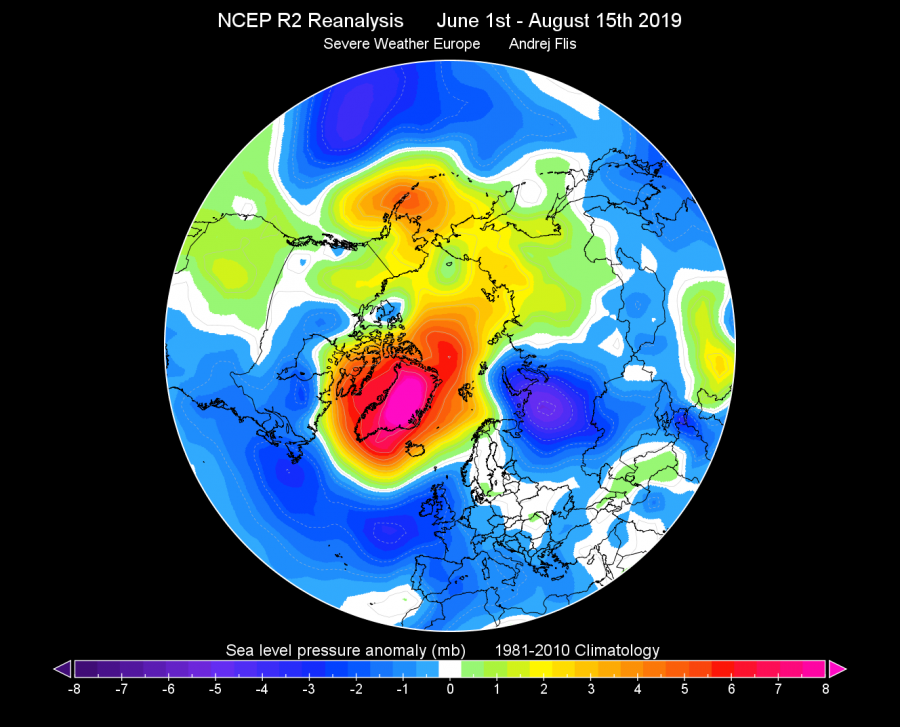 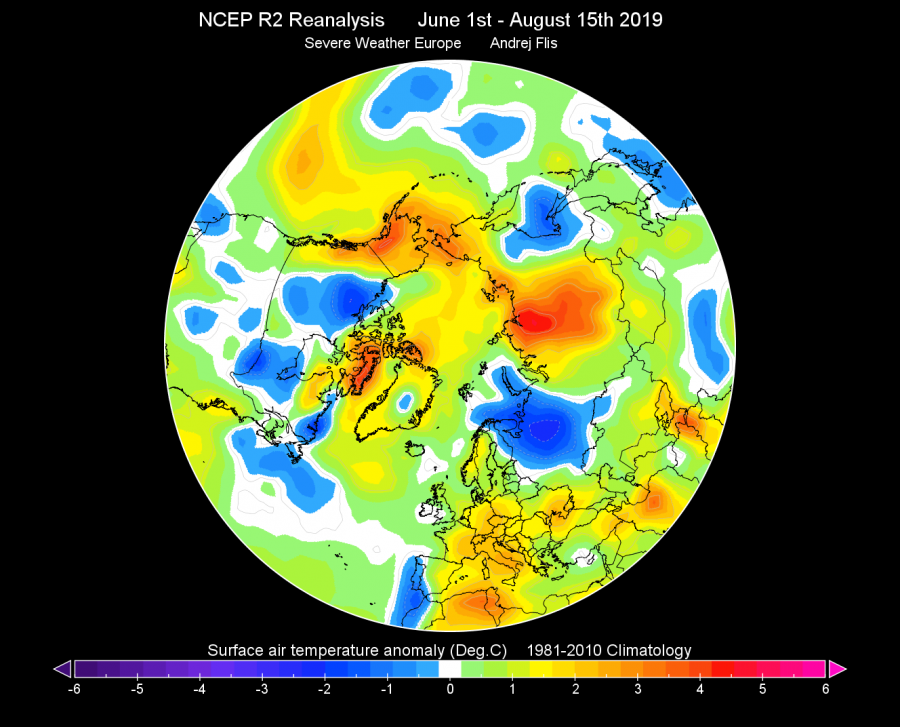 We have produced a graphic that shows the sea ice concentration and area, and including the 1981-2010 climatology area for the specific day. The biggest ice loss is towards the Pacific side and towards north Russia. That is the same area that shows the highest air temperature anomalies on the reanalysis graphic above. 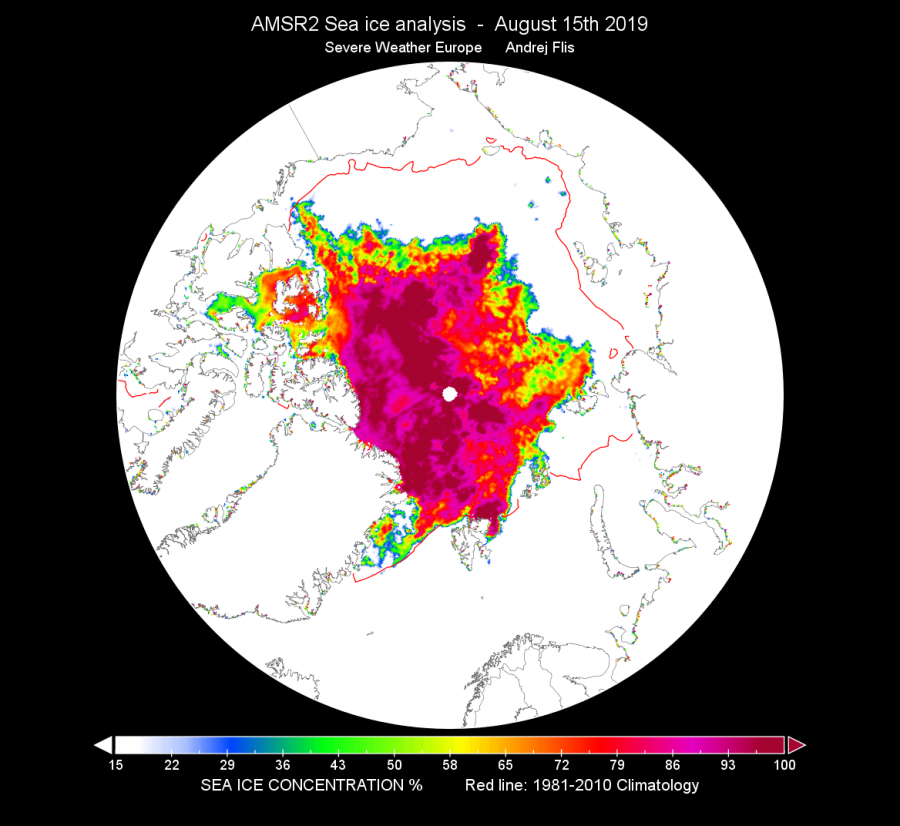 There have been studies that try to link the severe Arctic ice loss to more severe winters over the Eurasian sector. More evidence needs to be gathered and more data analysed to confirm that, but Arctic sea ice loss has been proven to affect the weather patterns across the Hemisphere, also through the polar stratospheric circulation. Usually it is the weather anomalies that cause the above normal ice melt, that later translate into autumn and winter weather patterns. So scientists look at the ice loss also as an indicator of the pattern changes, and not just as the cause. Especially the winter weather patterns result from many different global factors, so we cannot forecast a cold winter in Europe based solely on the Arctic sea ice extent in summer.  But there is some evidence and data that could indicate this ice loss as one of the first indicators that the 2019/2020 winter in Europe might perhaps be a bit more colder than what we were used to in the past decade or more (looking at seasonal averages). We will focus more on the seasonal forecasts for winter in the coming months.

Stay tuned for further updates, as we monitor the Arctic sea ice on its way to the absolute minimum in September.