A severe weather outbreak is likely across parts of central Europe this Sunday, with a rather volatile setup engaging a strongly unstable and sheared environment. A HIGH risk has been issued to cover the most robust severe storms capable of producing large hail and severe damaging winds, as well as flash floods in parts of eastern France and southwestern Germany.

A large mesoscale convective system (MCS) with destructive winds is possible along the leading edge of the cluster racing across Germany through the evening hours.

Above: Video animation of the convective storm’s development across Europe from the Sunday morning into the early Monday morning, June 20th to 21st, 2021.

The European continent is divided into two zones. A more or less stable general weather pattern across the eastern half with a ridge axis extended across the Mediterranean into central Europe. A large blocking High remains over northeastern Europe and northwest Russia.

While to the west, a very deep and large upper-level trough/low is slowly moving east across the Bay of Biscay and northern Iberia. In between these two large-scale features, a tongue of strongly unstable air mass is being pumped into central Europe, couplet with strong southwesterly jet stream and steep mid-level lapse rates aloft.

A weak upper low is rotating over western Turkey, affecting the Balkan peninsula as well.

At the surface, a diffuse cold front is extending from northwestern Germany into southern France and northeast Spain, gradually advancing towards the east-northeast. Another frontal system is moving northeast with a surface low in central Finland.

MDT/ENH/SLGT risks have been issued for areas surrounding the HIGH-risk area across France, southern Benelux, Germany, western Poland, west-central Czechia, parts of Austria, and northern Italy with a threat for severe winds, large hail, torrential rainfall, and low tornado threats, but with less coverage than inside the HIGH-risk area.

With the upper low moving east through Sunday, convective activity will gradually expand in coverage across the MDT in France, spreading towards Switzerland and southwestern Germany through the afternoon into the evening hours. During the peak time heating hours, strong instability will build across and to the east of the HIGH-risk area.

Combined with strong upper-level forcing, storms will rather quickly expand in coverage and intensity, fueled by high instability and moderately strong shear. While the preferred mode seems a severe line of storms – bowing segments, a few embedded supercells are also possible in the final hours prior to the arrival of the convective complex from France.

Those storms could pose threat for large hail, with even isolated very large hail up to around 6 cm in diameter. However, the HIGH risk was issued mainly for the concerning severe damaging winds, with potential destructive wind gusts reaching up to 120 km/h towards the evening into the early night hours.

A severe squall-line could result in numerous downed trees as well as damage to the powerlines and transportation issues. Besides the severe threats, torrential rainfall with flash floods is very likely as well. Some tornado threat will also be possible over Germany where east-southeast surface winds increase towards the evening hours, ahead of the coming convective complex.

In the evening hours, the MCS will be moving across central Germany, gradually losing its strength overnight as instability vanishes further northeast towards western Czechia and Poland.

+++ Weather forecast for Spain and France +++ 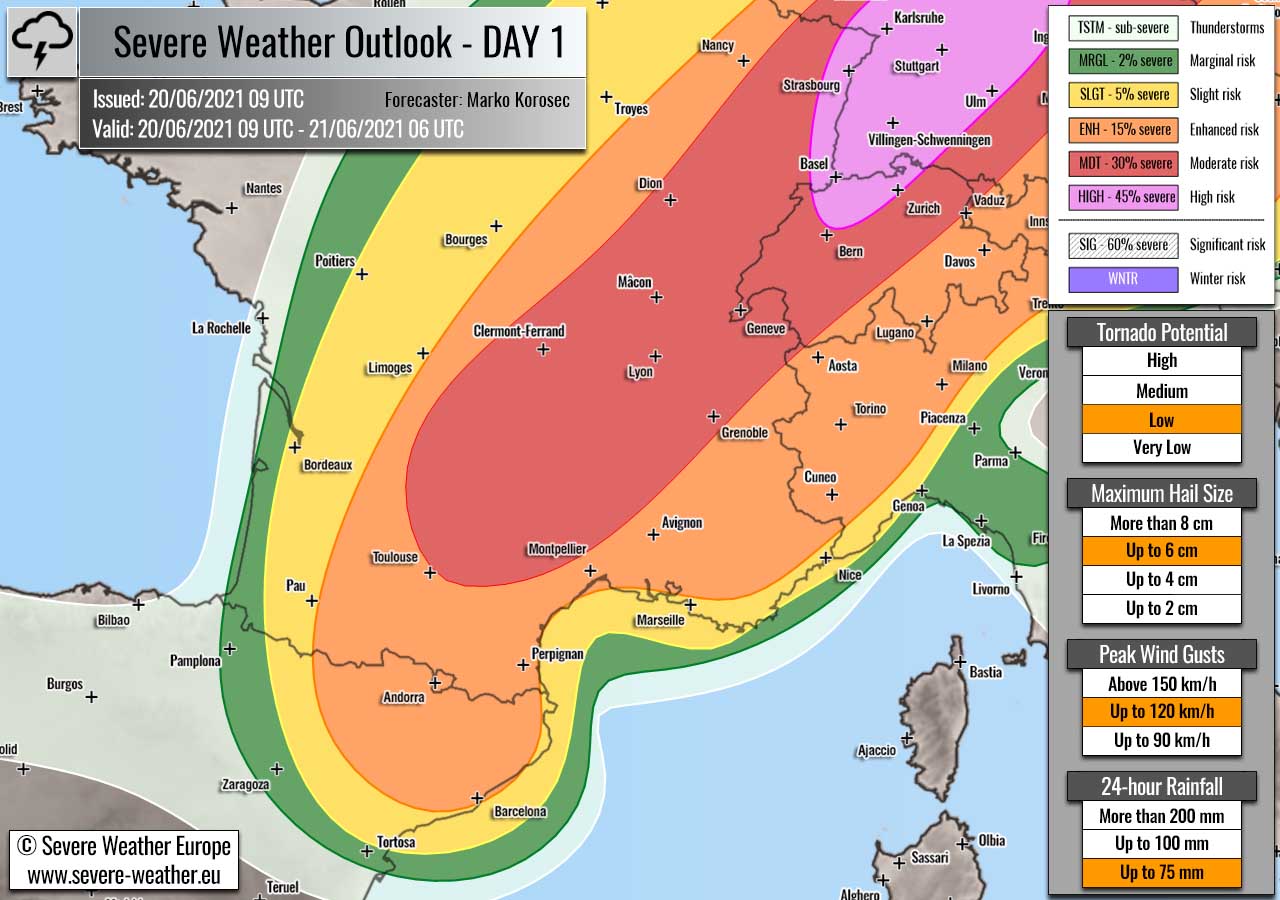 MDT/ENH/SLGT risks have been issued for southern France into northeastern Spain with a threat for large hail, severe winds, and tornado threats.

The ongoing severe storms over the highlighted areas will be gradually losing their strength over northeast Spain as instability is being washed away with the cold front advancing further northeast. However, the threat continues across France until the evening hours.

Heavy rainfall, large hail, and damaging winds will locally develop, while some tornado threat remains along southern France where low-level winds and helicity are the highest through Sunday afternoon.

Once storms merge into a large cluster towards eastern France, activity will vanish to its south rather a quicky towards the evening.

+++ Weather forecast for Denmark and Sweden +++

SLGT risk has been issued for eastern Denmark into southern Sweden with an isolated threat for severe storms, capable of producing severe winds, marginal hail, and some tornado threats.

A short-wave trough is moving north across the North Sea into southwestern Scandinavia and will be the focus for some convective initiation across the SLGT risk area. A few supercells are possible to develop along the moving front, taking an advantage of the weakly unstable air mass but the moderately sheared environment.

Storms will gradually diminish towards the evening hours as instability vanishes. 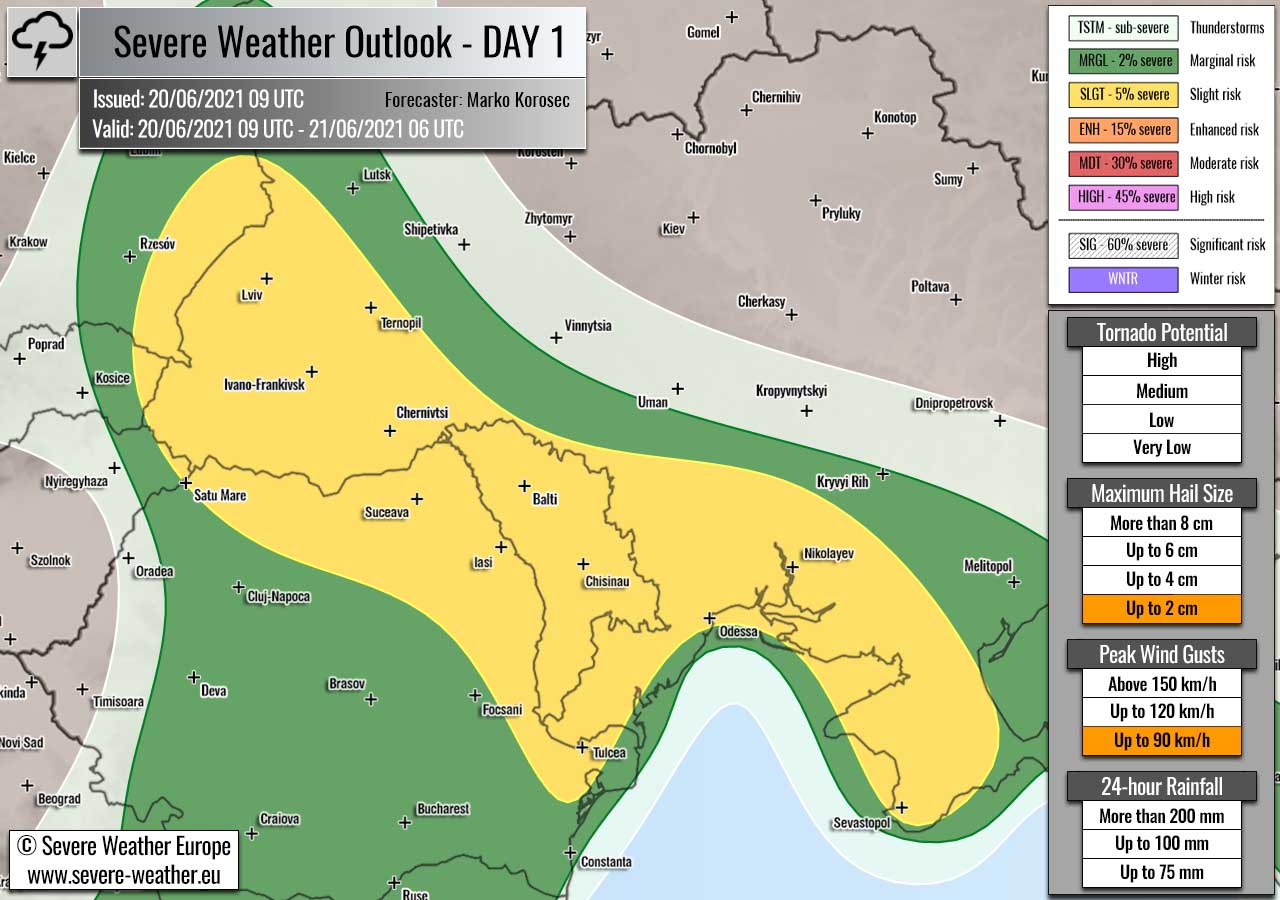 SLGT risk has been issued for southeast Poland, western and southern Ukraine, eastern Romania, and Moldova with an isolated threat for severe storms, capable of producing marginally large hail, and torrential rainfall with flash floods due to slow-moving storms.

MRGL risk has been issued for areas surrounding the SLGT risk across the eastern and southern Balkan peninsula into western Turkey with less robust storms, but still, some severe threat for marginal hail and torrential rainfall and flash floods exists.

MRGL risk has been issued for central Finland into northwestern Russia with an isolated threat for severe storms, capable of producing severe winds and tornadoes.

TSTM risks have been issued for areas across northern Algeria, Georgia, the Baltic countries with a threat for daytime-driven storms. Limited shear is present, so the storms should remain sub-severe.