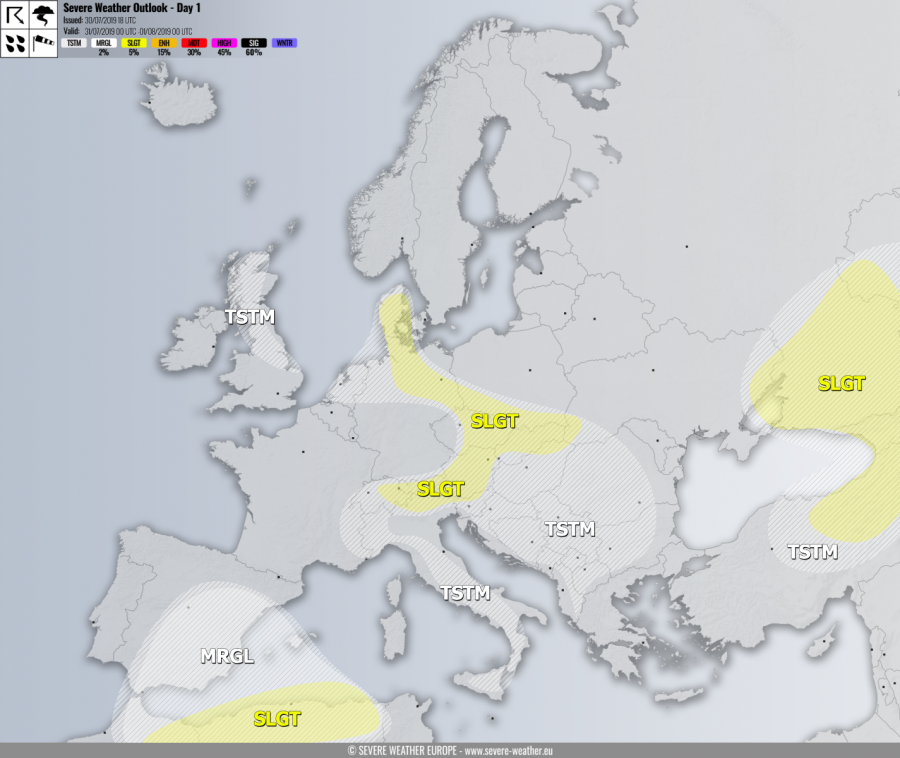 A weakening upper low moves from W Europe towards the North Sea and Denmark while a very deep low over W Russia continues moving south. Ridging strengthens over Scandinavia and southern Europe. Another short-wave move across S Iberia.

SLGT risk has been issued for Denmark, NE Germany, SW Poland, E Czechia, Slovakia, NE Hungary into NE Austria, N Italy and N Slovenia with threat for severe storms, capable of producing torrential / excessive rainfall and marginal hail. Moderate instability under a rather low wind shear should again produce widespread slow-moving storms with flash floods threat. Some large hail is possible within the stronger updrafts too, especially across the Alps and NE Germany where shear improves with the arrival of the upper low from western Europe.

SLGT risk has been issued for E Ukraine into W Russia, Georgia and NE Turkey with threat for severe storms, capable of producing severe winds, large hail and torrential rainfall. Scattered organized storms are possible along the moving cold front under moderate shear and instability, including some supercells with large hail and severe winds. Further south of the front, additional organized storms are likely under similar conditions, as favorable ascent exists near the shallow upper wave and should initiate storms by early afternoon.

MRGL / SLGT risk have been issued for the N Algeria into SW Mediterranean with isolated threat for severe storms, capable of producing severe winds and large hail. MRGL risk has been extended into the Iberian peninsula as some better-organized storms maybe develop there are well. The lack of better ascent limits more activity.