A powerful earthquake swarm has begun on the Reykjanes Peninsula, Iceland. Nearly 4000 earthquakes have been detected in the first 24 hours, with the activity continuing at a strong pace. First data also shows tremor signals, indicating that the activity is likely due to magma movement below the ground.

This has prompted the officials to raise the alert level in the area. An eruption is likely, with the chance increasing steadily as the earthquake activity continues. 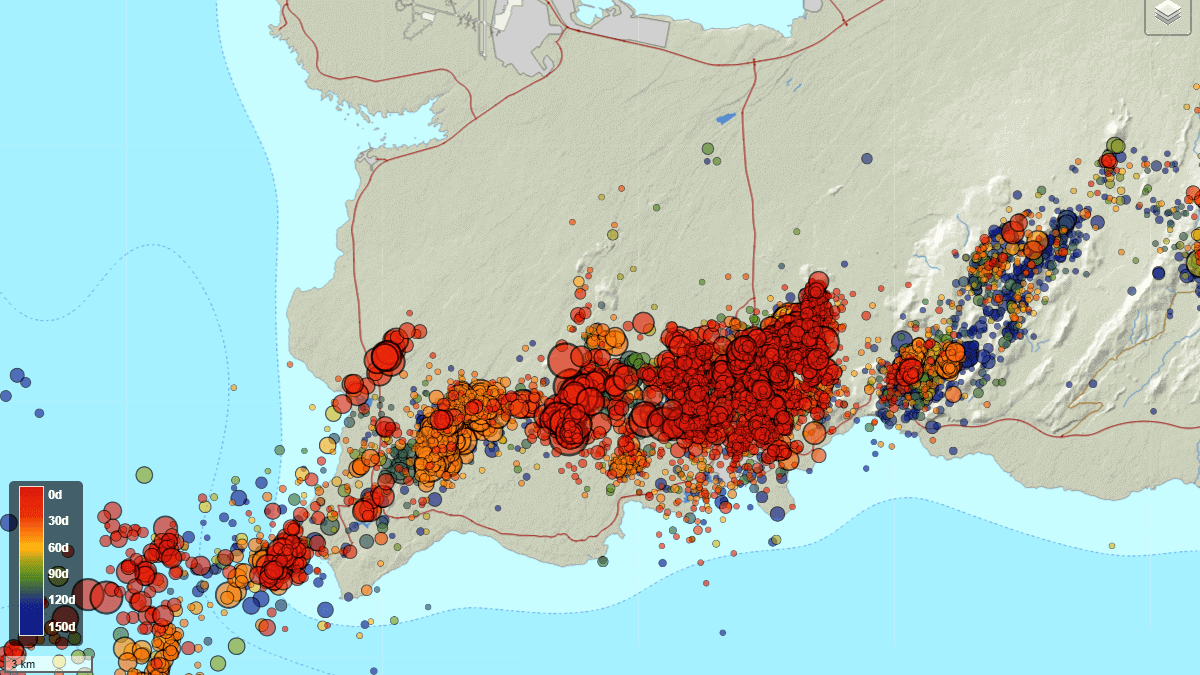 Iceland is a volcanic island in the North Atlantic and one of the most active volcanic regions in the world. In its history, it produced significant eruptions with powerful impacts on Europe, North America, and the entire Northern Hemisphere.

The island experiences constant earthquake activity because it sits on the boundary between the Eurasian and North American tectonic plates. This boundary is also known as the Mid-Atlantic Ridge (MAR).

The image below shows the spreading tectonic plates and where the Mid-Atlantic Ridge passes through Iceland. It enters the southwest on the Reykjanes Peninsula, going to the east and turning north. Red triangles show the main central volcanoes. 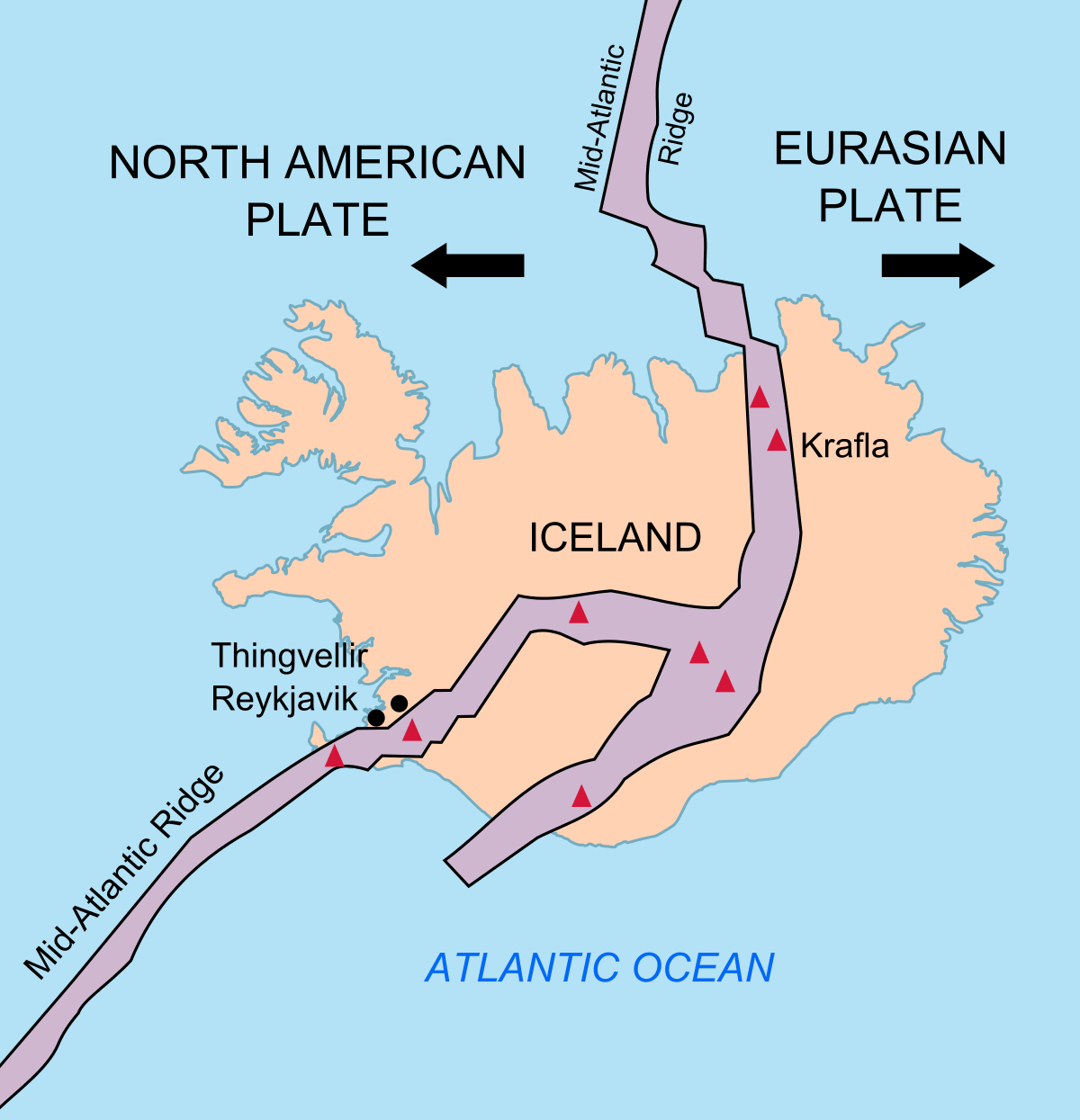 But the tectonic plates spread apart down across the entire Atlantic Ocean. So why is this location so unique, producing a large volcanic island over millions of years?

The answer is a vertical plume of hot molten rock from the mantle, also called a hotspot or a Mantle plume. Extensive studies have proved that it lies beneath Iceland. Therefore, it is more commonly called the Icelandic plume.

Below is an image that shows the approximate center of where the plume connects with Iceland under the Vatnajokull glacier (black circle). You can also see the mid-Atlantic ridge in orange and volcano locations. 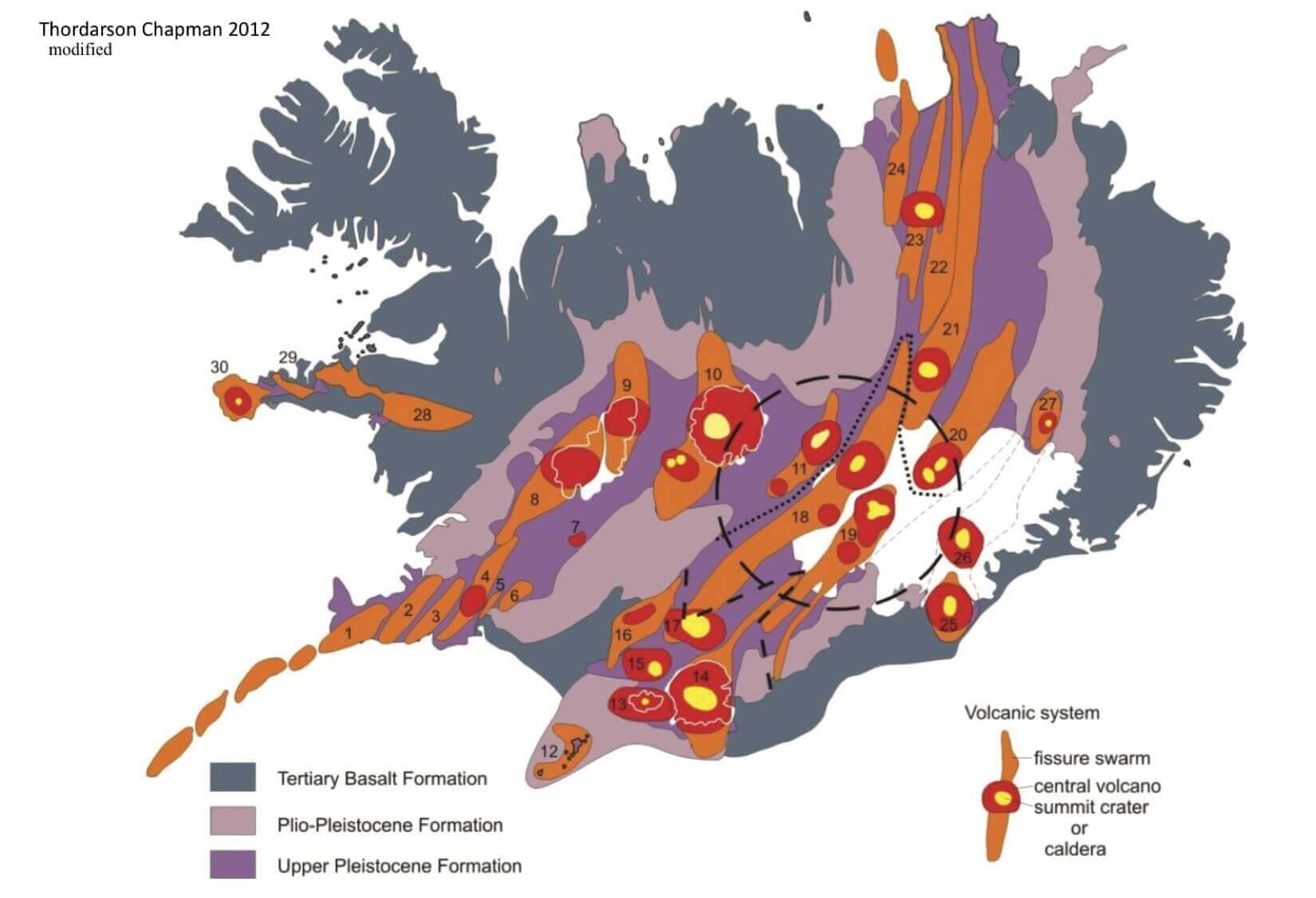 But our focus is on the southwestern region, called the Reykjanes Peninsula. Below you can see this area, along with the earthquake activity before the latest swarm began. It has steady background tectonic activity.

This is also the place of the last eruption in Iceland, with the new earthquake activity being very close to the eruption area.

There is usually a volcanic eruption in Iceland every 4 to 6 years. The last eruption began on March 19th, 2021, and ended in mid-September. This eruption was a more lava flow from the Fagradalsfjall volcanic area. The eruption area is found on the Reykjanes Peninsula in southwest Iceland, as seen in the image below by the Icelandic Meteorological Office (IMO). 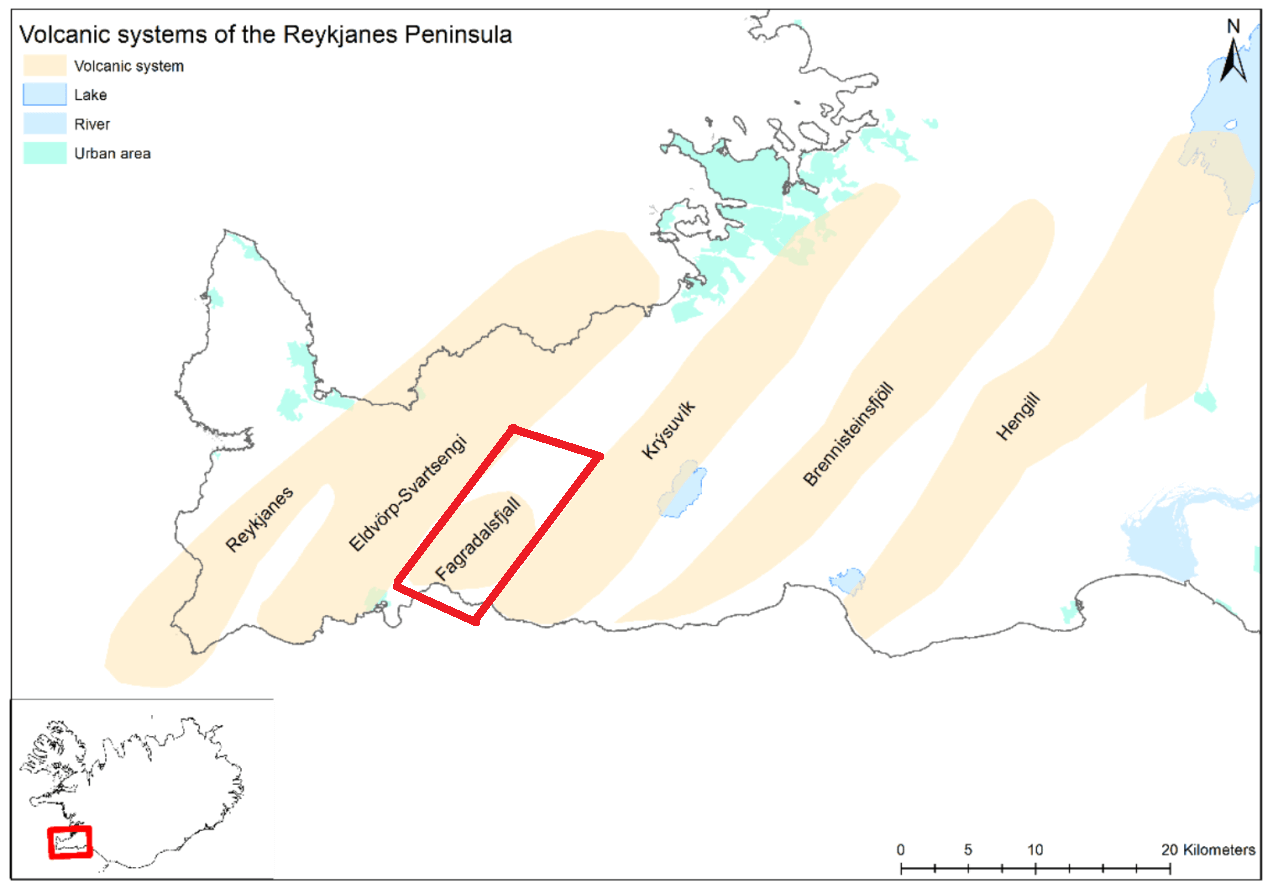 Below is an image of the lava field during the eruption. The eruptive cones were glowing red, while the erupted lava was already cooling and turning dark in the process. There was near-constant lava spattering from the vents, which have been building cones above the eruption points. Photo by: Almannavarnir/Björn Oddsson. 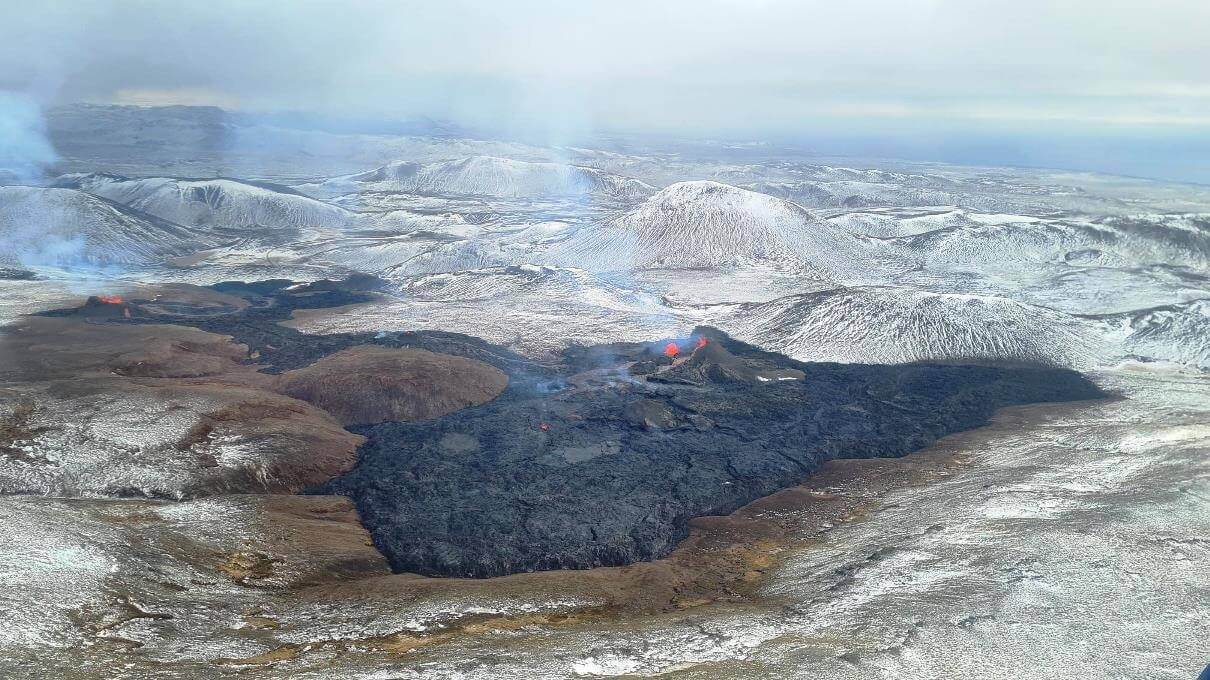 The Icelandic Met Office (IMO) reports that around 151 million cubic meters of lava erupted (5.3 billion cu ft), covering an area of approximately 4.8 km2 (1.9 square miles). Below is a map from @geoviews that shows the eruption cones (triangles) and the final spread of the lava field. 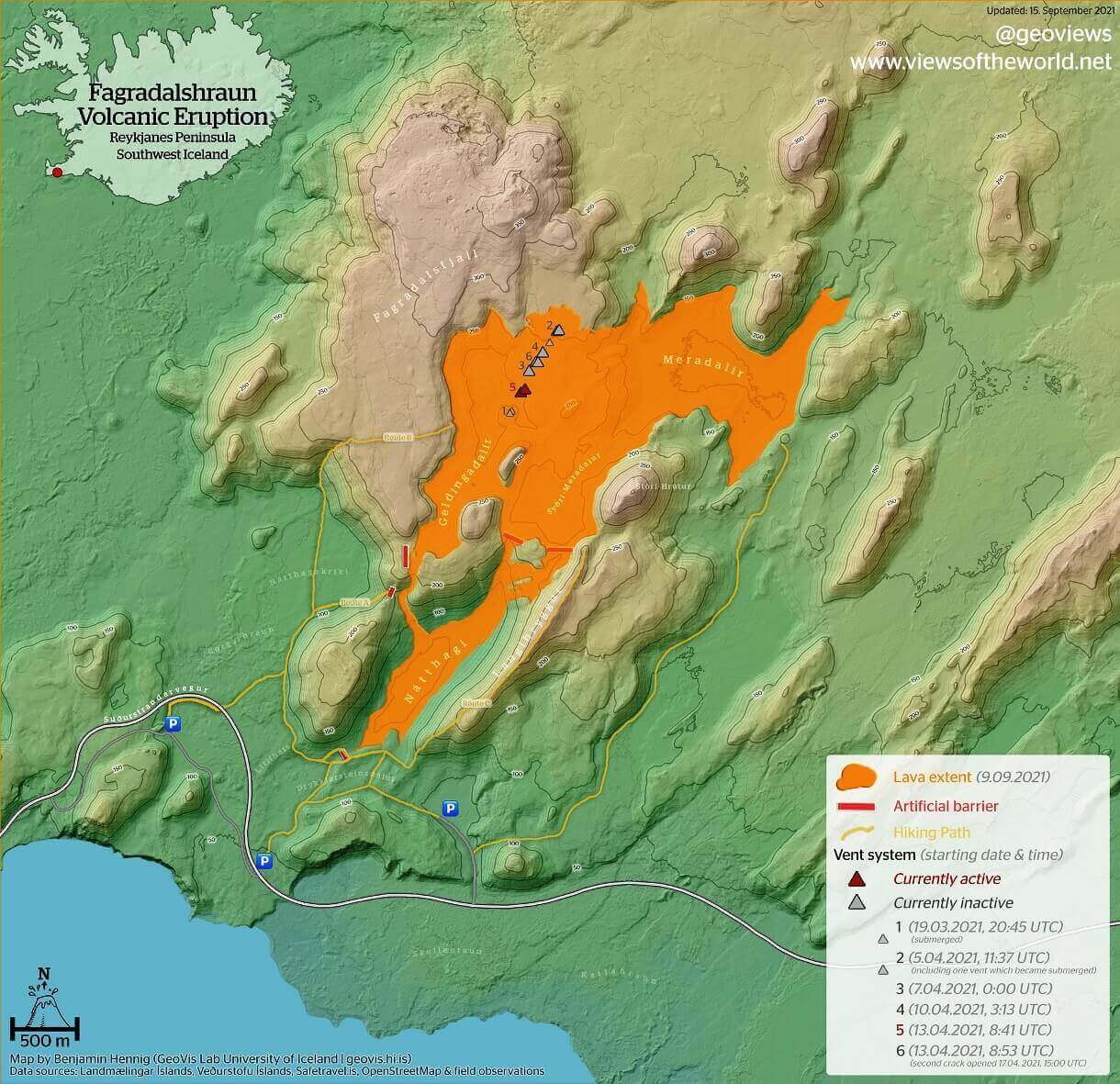 The whole sequence began with an earthquake swarm on February 24th. The strongest earthquake in the initial swarm had a 5.8 magnitude. There were also numerous M3 and M4 earthquakes in that swarm and many strong aftershocks. The shaking was strongly felt all the way to the capital Reykjavik.

More than 20.000 earthquakes have been recorded with the Icelandic Meteorological Office’s automatic seismic measuring system two weeks after the start of the earthquake swarm. 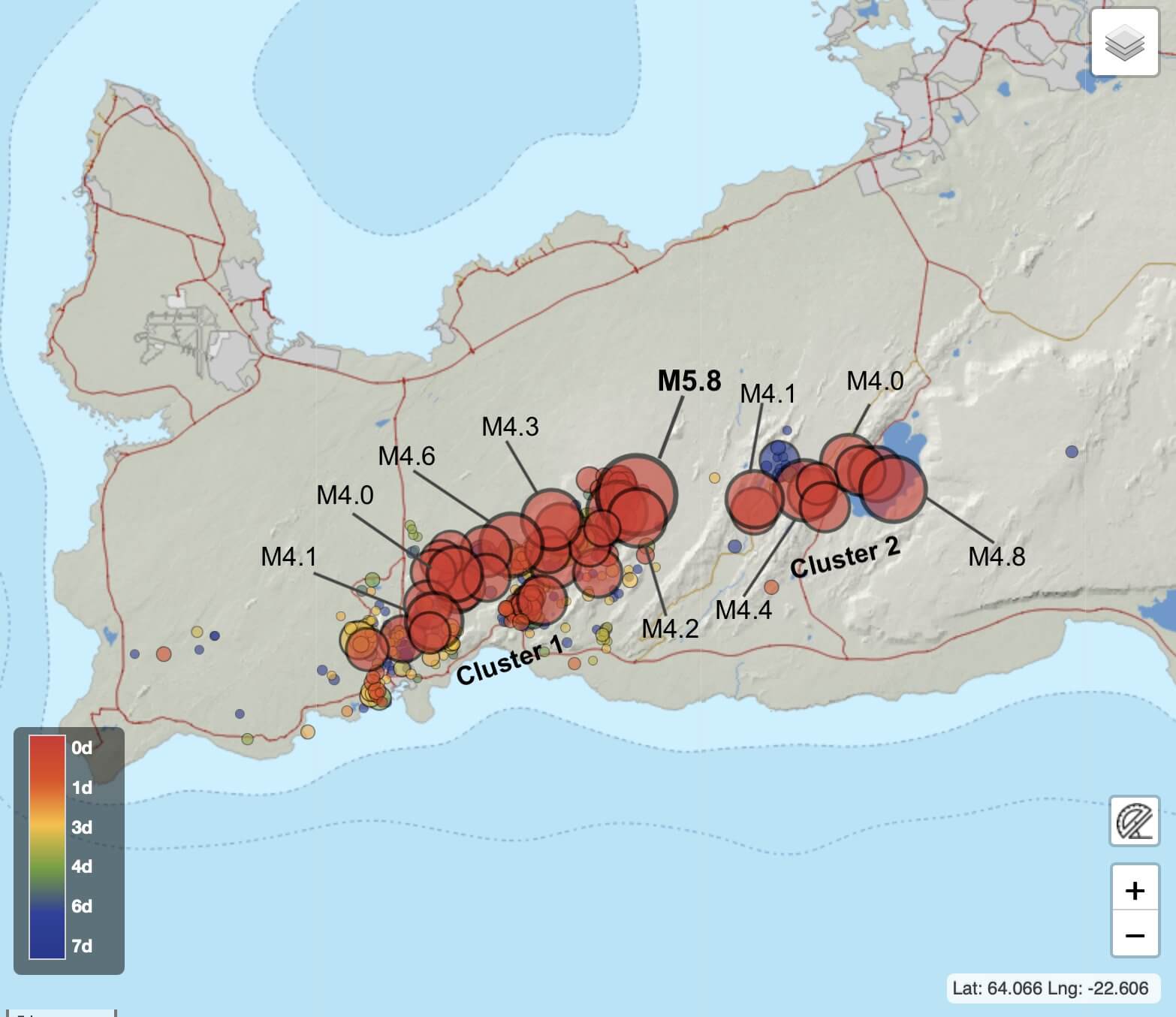 The graph below shows the earthquake activity on the peninsula in the past 2 weeks. Since the onset of the main swarm on February 24th, the earthquakes continued with frequent magnitude 4 and 5 earthquakes. 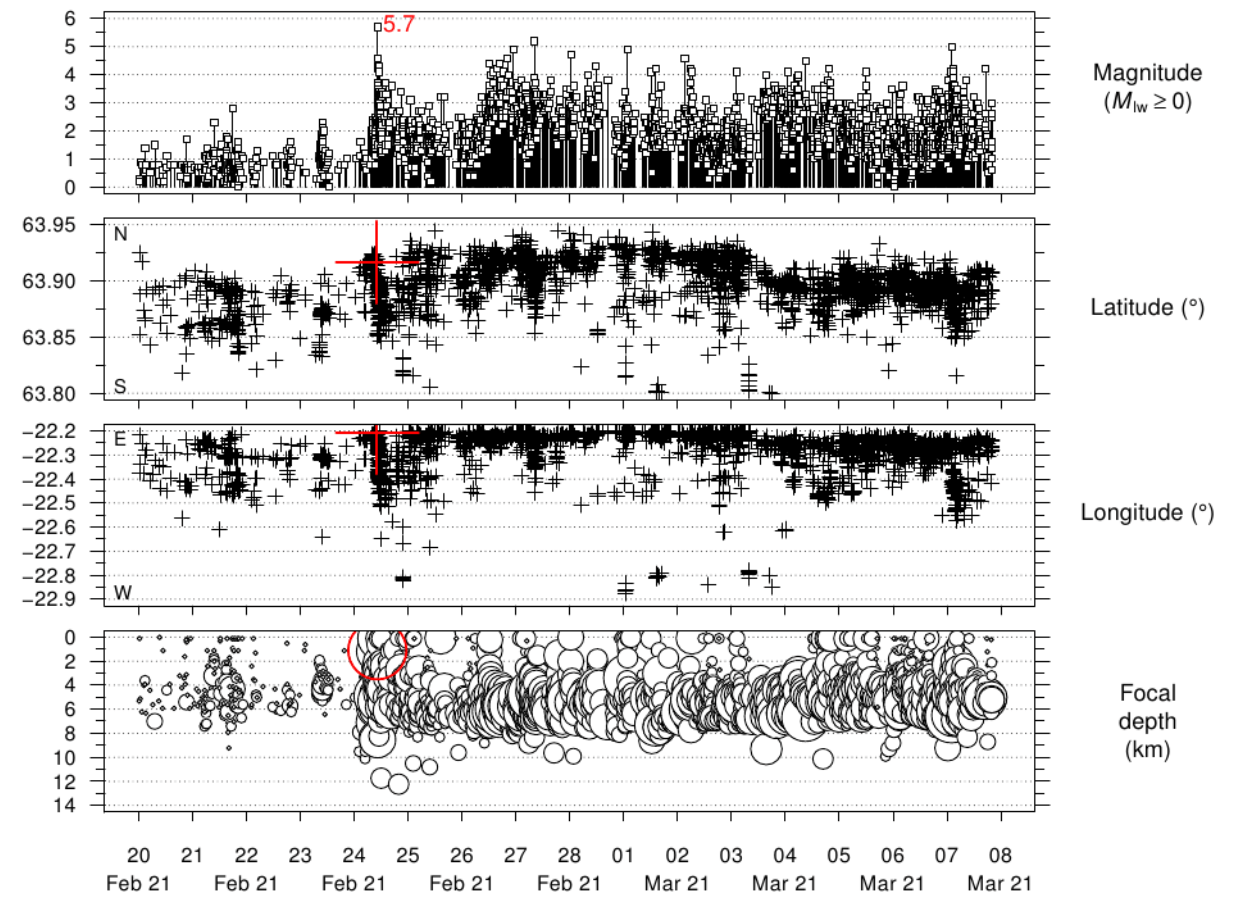 The earthquake analysis for the period up to the swarm shows that this region is under constant shaking. You can see the earthquake swarm from February/March at the end and how powerful it was compared to the previous activity, releasing more energy than combined in the last decades.

But a similar area has now re-ignited with strong earthquakes and a large earthquake swarm.

Currently, we again have new activity on the Reykjanes peninsula, in southwest Iceland, just northeast of the previous eruption site.

The most significant event so far had a preliminary magnitude of M5.4 with a depth of around 2 km (1.2 miles) and occurred on July 31st. Based on the available data, this new earthquake activity is triggered by magma movement at a depth of around 5 to 7 km (3 – 4 miles).

The video below shows the shaking of the camera after being hit by a Magnitude 5+ earthquake on the Reykjanes Peninsula in Iceland. You can see the steaming from the crater of the Geldingadalir volcano. This video was taken with a webcam from mbl.is.

In the image below, you can see the initial earthquake burst on July 30th. It is located just to the northeast of the lava field produced by the eruption last year. 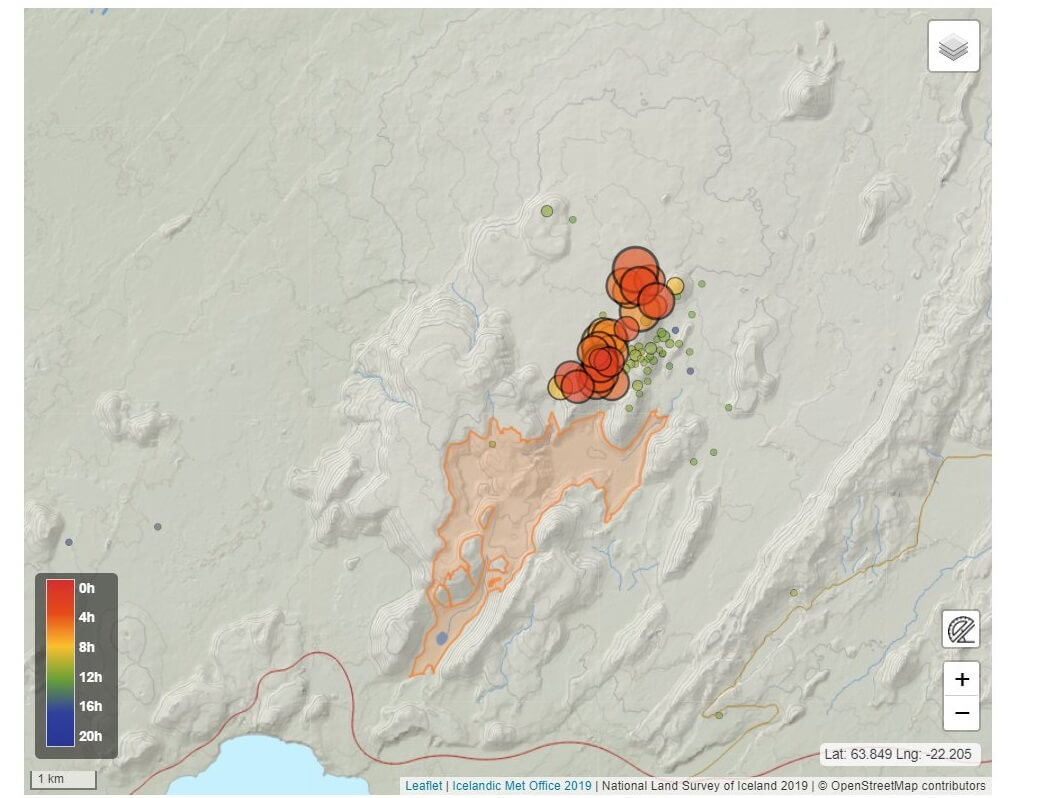 Recent deformation observations also confirm that this activity is likely caused by magma intrusion. Preliminary modeling results indicate the source is located at a depth of between 4-5 km. 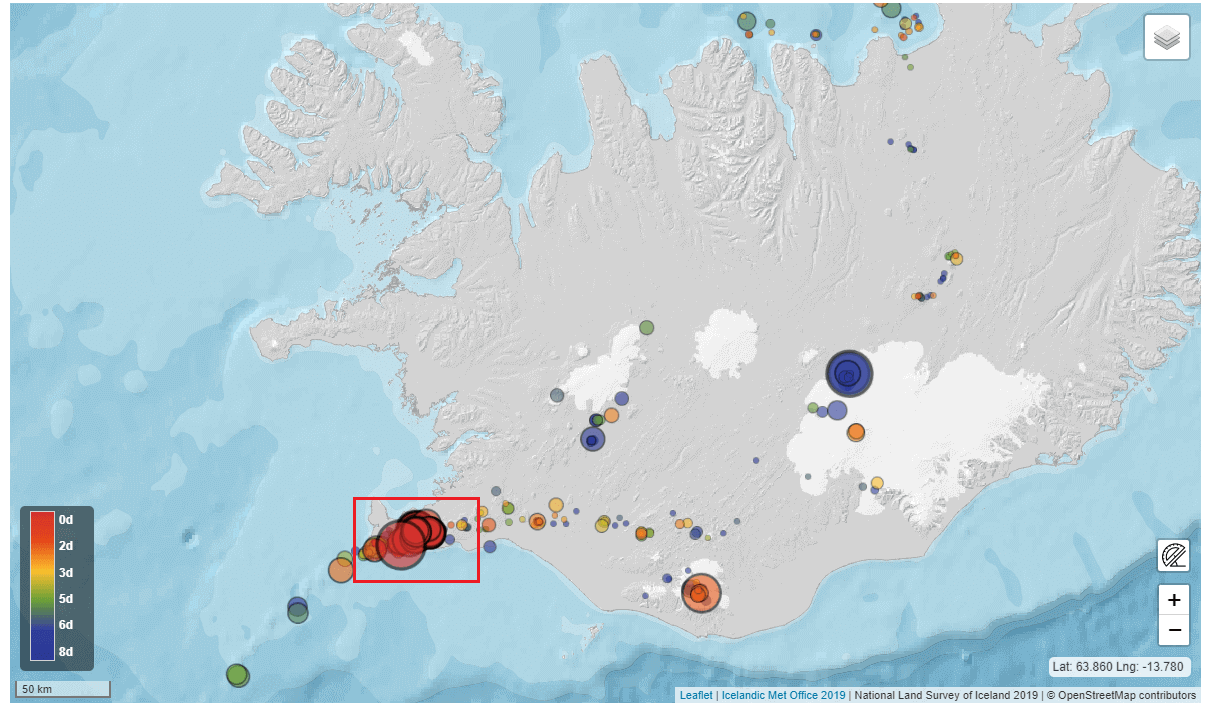 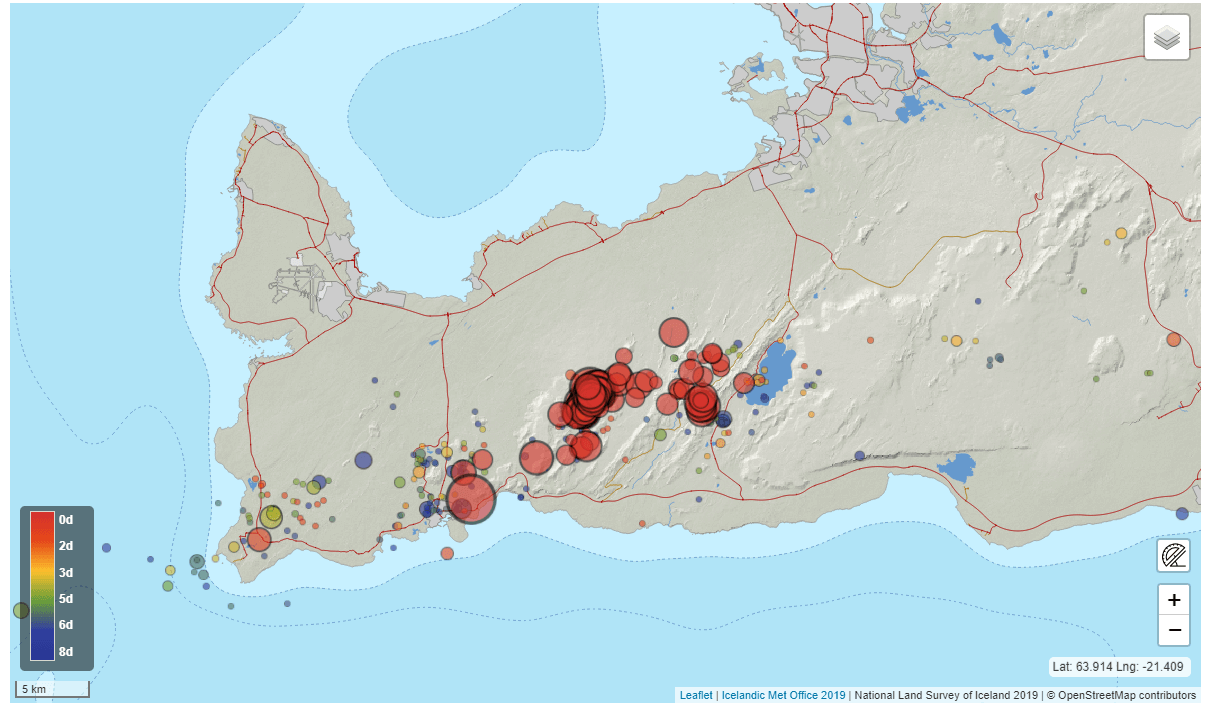 We can see this by zooming further into the red square. This revealed that most of the activity is actually located northeast of Fagradalsfjall. That is the location of the eruption last year. 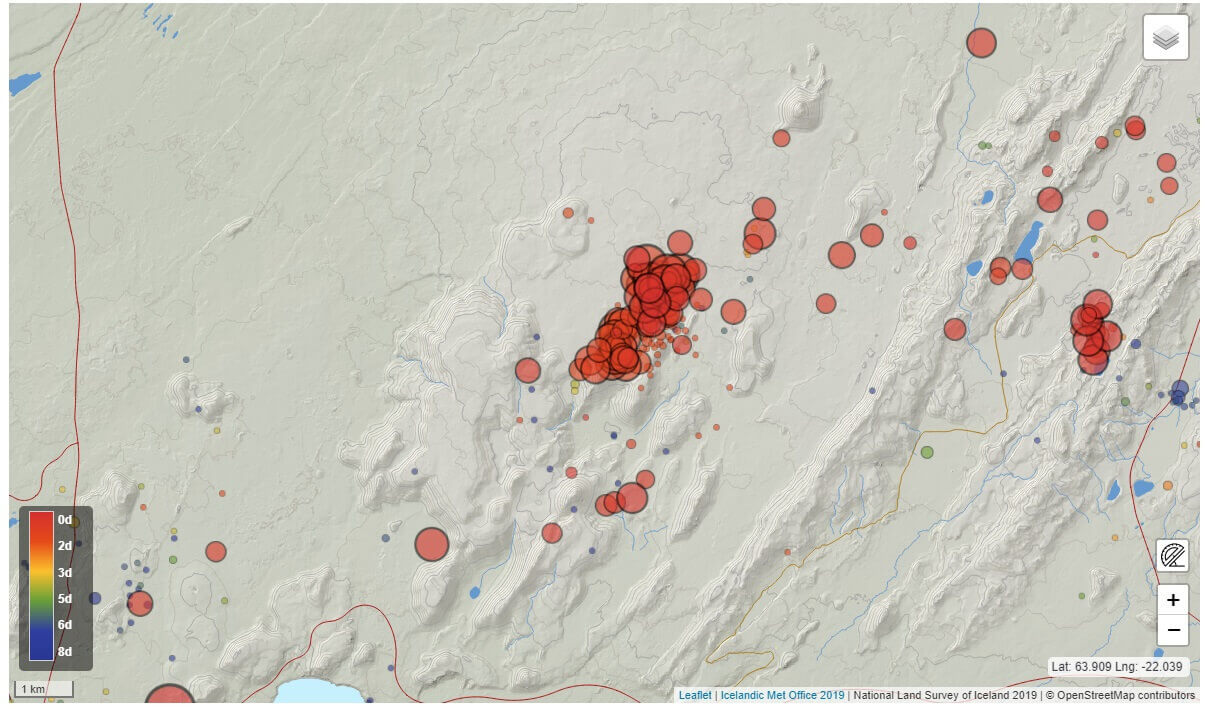 There are many seismographs in this region, so monitoring is excellent. Below we have a seismograph reading from the Grindavik area, close to the activity. You can see many earthquakes, down to the micro-seismicity. The strongest wave is the M5.4 earthquake, the largest detected so far. 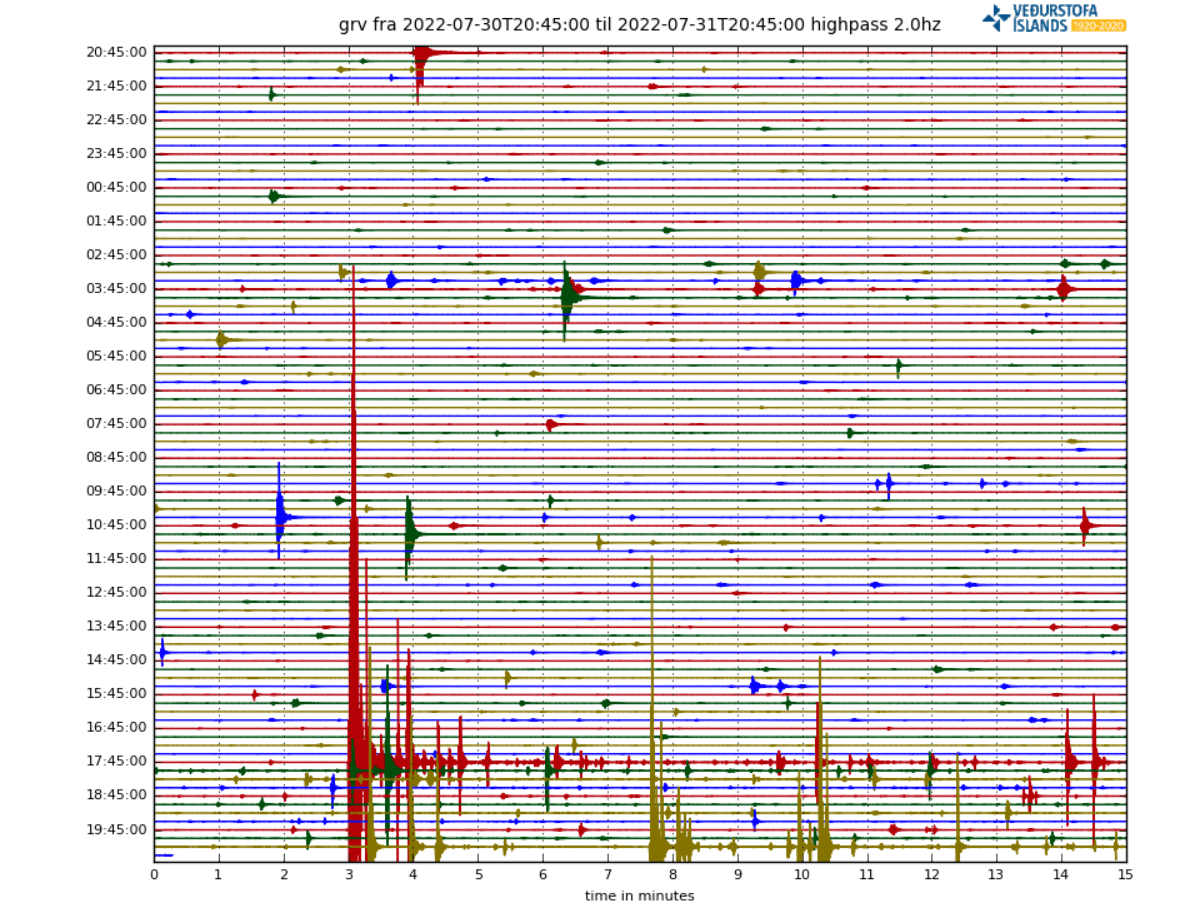 Looking at the lower frequency plot, we can see strong energy also in the lower frequencies. This does indicate that there is more than just rock breaking going on. Low-frequency signals can indicate fluid movement, which in this case means magma at depth. 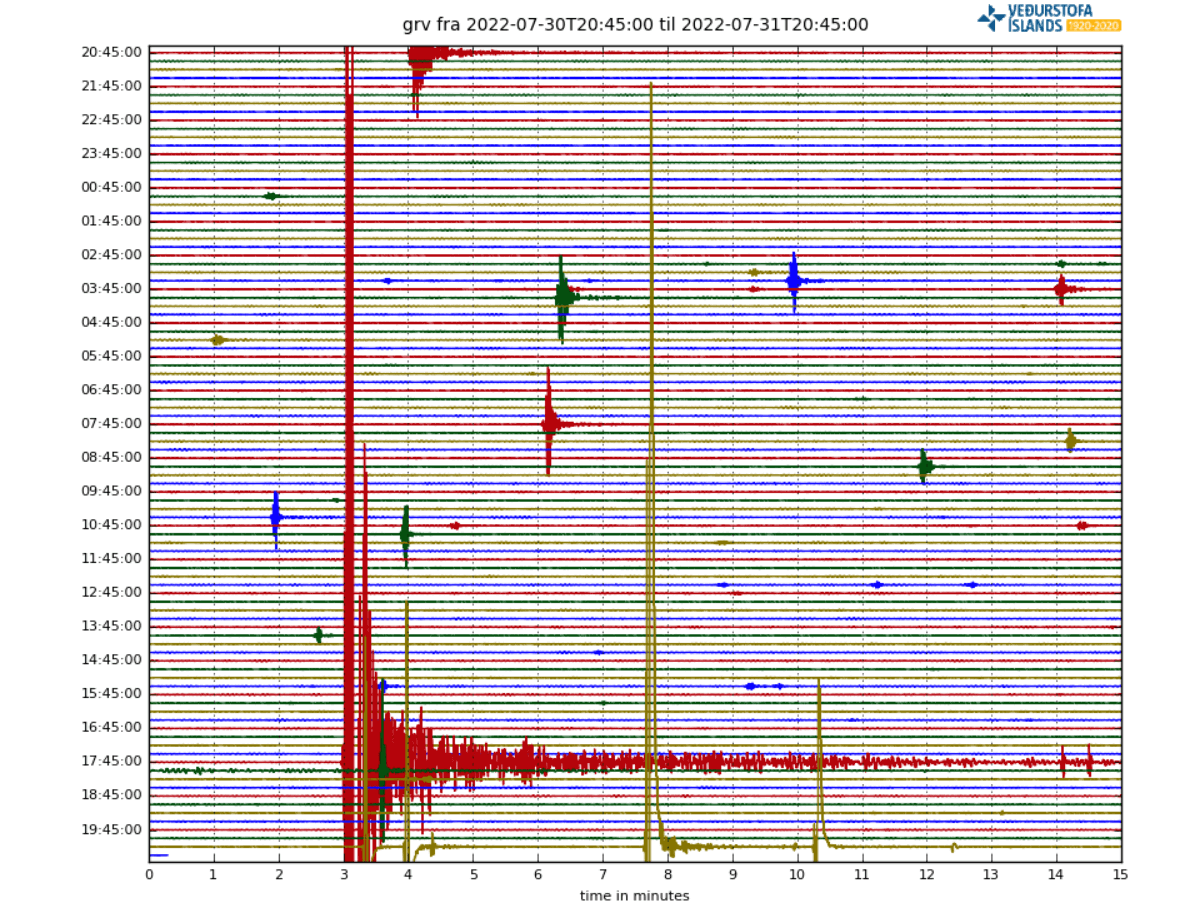 The graph below shows that nearly 500 earthquakes have been manually reviewed and located in the second half of July. But in total, nearly 4000 seismic events have been detected by the monitoring stations in the last 2 days alone. 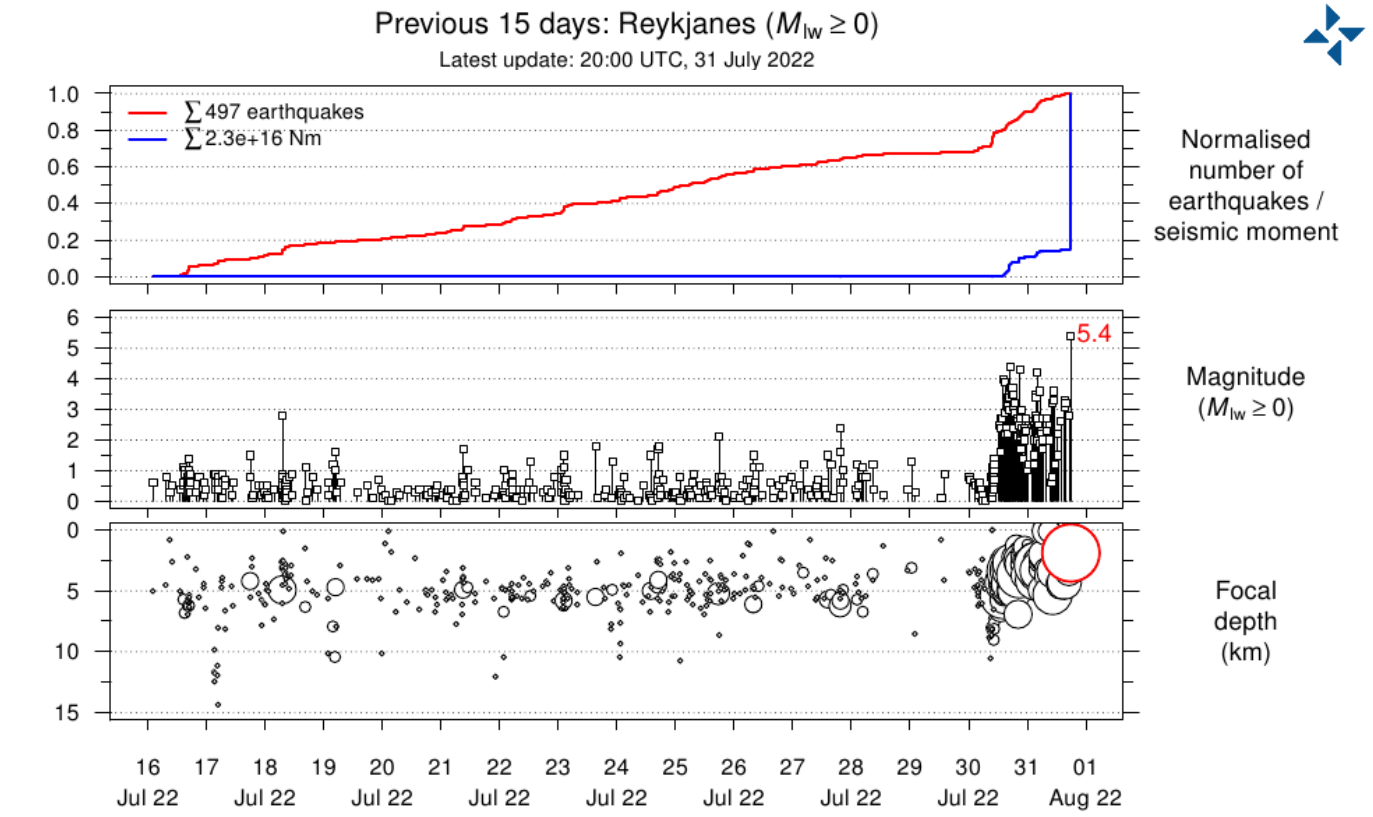 The automatic earthquake detection system is very sensitive and picks up even on weak activity. But the automated data is not that accurate. So manual review is necessary to refine the location and depth of each earthquake, which is a time-consuming process.

Looking at the last 48 hours, we can see that the activity is ongoing at a steady pace. The image shows both the manually reviewed earthquakes and the auto-detected events. Not all the events are shown on the map, as a lot are too small to be properly located and plotted but are seen on the seismograph. 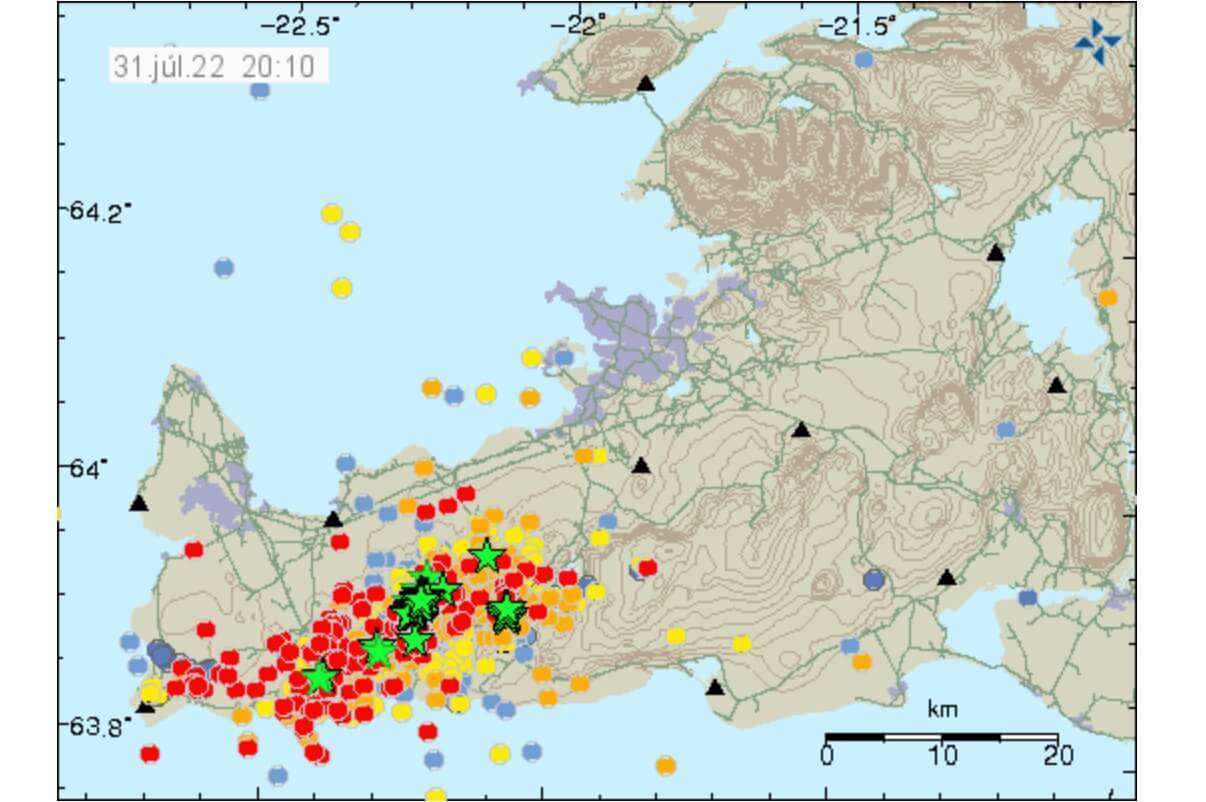 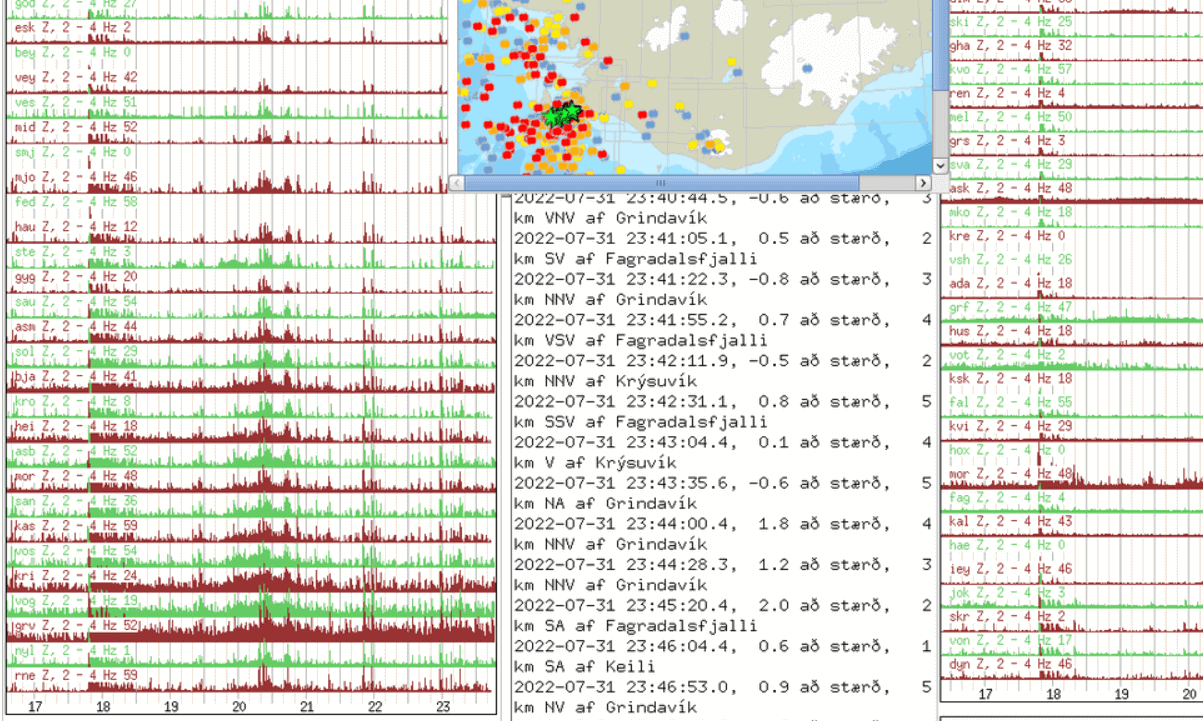 Speaking of a seismograph, there is a special plot that shows the frequency of shaking and the associated intensity. In the image below, we have high, medium, and low-frequency signals from a monitoring station nearby. 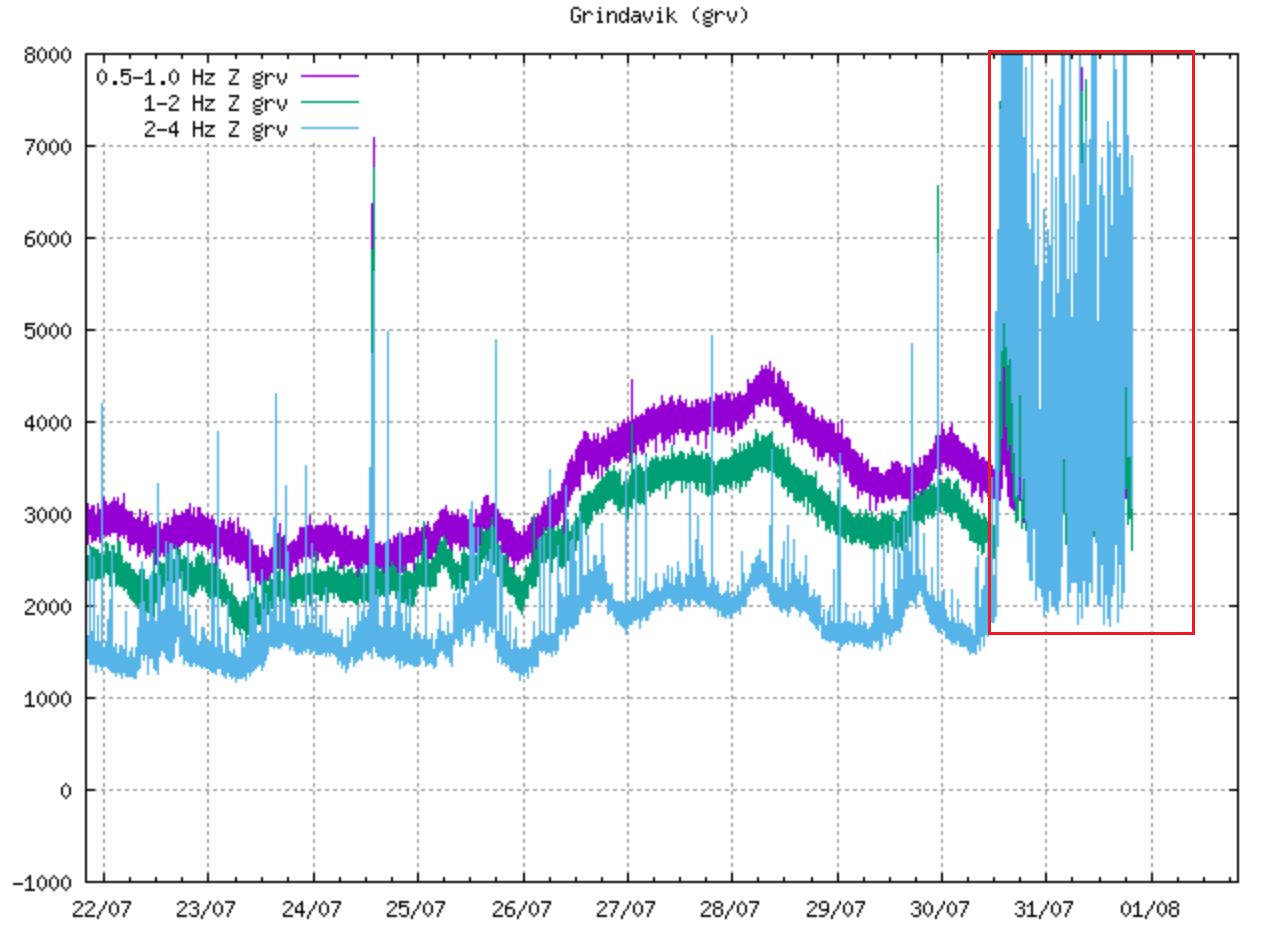 It shows a decent and continuous tremor signal associated with the earthquake swarm. This is also a sign of the magma movement being a factor in these events.

FROM GREEN TO YELLOW LEVEL

In light of the increased seismic activity and ground deformation, the Krýsuvík-Trölladyngja volcanic system was elevated from GREEN to the YELLOW aviation code level. Earthquake activity and rapid inflation are always a cause of concern with volcanoes, so a higher alert level is expected if the activity continues. 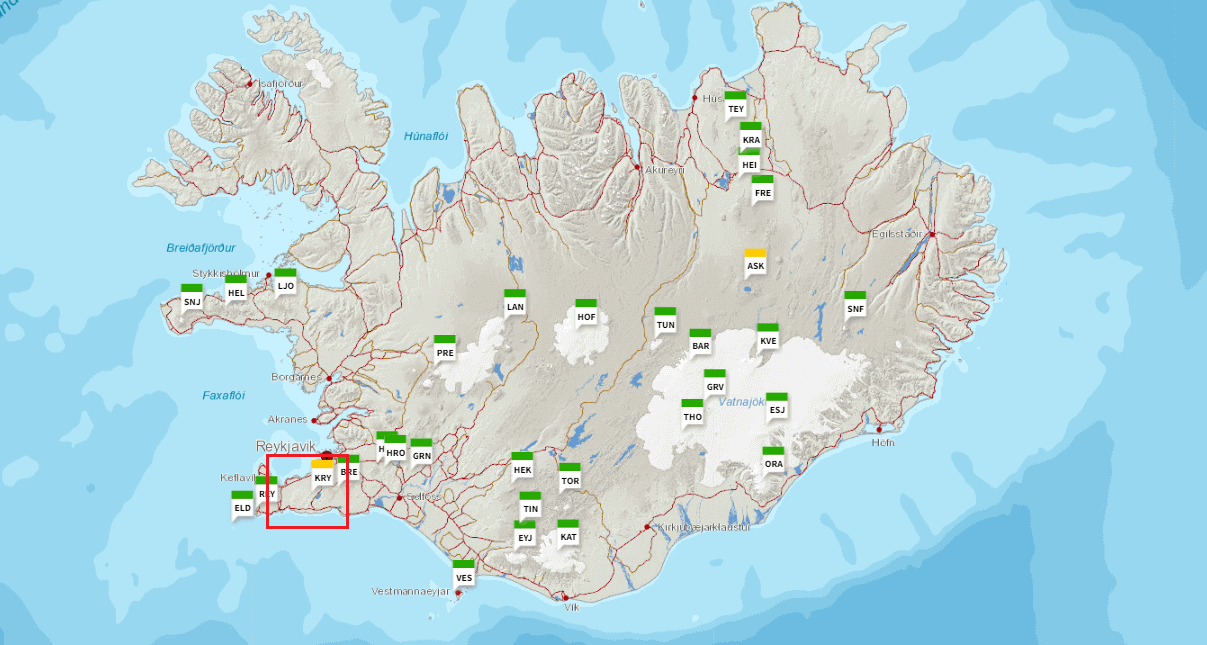 The final graphic shows the projected path that lava could take in a potential larger eruption in the main earthquake area. This is just a simulation based on the current known information and historical data. 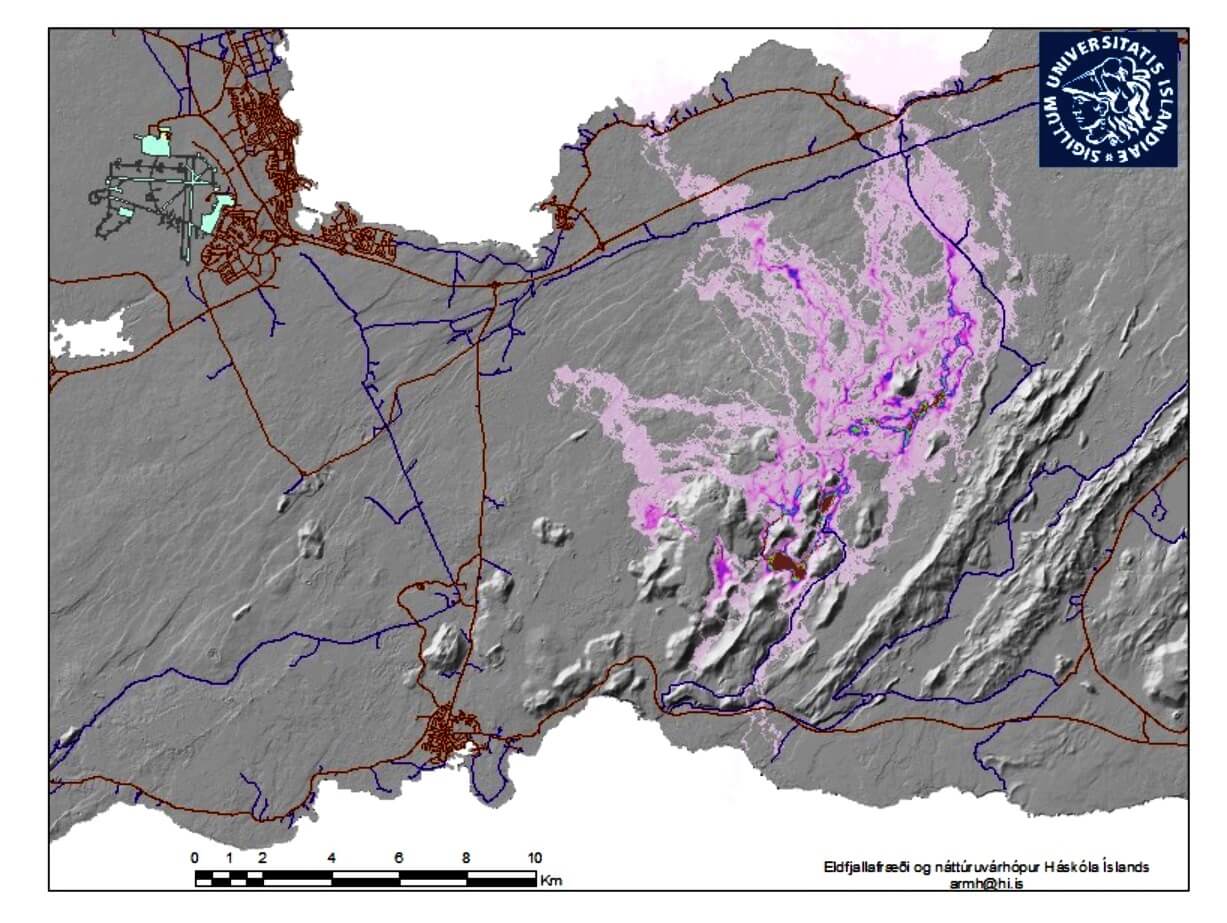 An eruption is not yet certain at this point, but the longer the earthquake activity continues, the higher the chance of an eruption becomes.

It would take a strong eruption to produce enough gas to reach Europe in harmful concentration. It has happened in the past, with deadly consequences, and it can happen again in the future.

But if an eruption does happen, it is not currently projected to produce such strong concentrations of volcanic gases.

There is also a possibility that the earthquake activity could slowly reduce, ending with no eruption.

We will keep you updated as fresh data is available and more reliable projections can be made.