A volcanic eruption began on La Palma in the Canary Islands after several days of intense earthquake activity at the volcano. Large lava fountains and lava flows are moving towards nearby villages, forcing evacuations of thousands. A potential threat of a tsunami across the Atlantic ocean was mentioned, that could reach the eastern coast of the United States and of course Europe.

The volcano in question is called Cumbre Viejo and was currently dormant for 50 years. Its last eruption was in 1971, also producing lava fountains and lava flows

The island of La Palma is comprised of two volcanoes. The older Caldera de Taburiente in the north, and the younger Cumbre Vieja in the south. This southern volcano is one of the most active in the Canaries. It is estimated to be around 125,000 years old and is oriented in a north-south line.

Eruptions during the past 7,000 years have formed abundant cinder cones and craters, producing lava flows that reached all the way to the sea. Eruptions in the recorded history since the 15th century have produced mild explosive activity and lava flows that damaged populated areas. The southern tip of the island is covered by a large lava field from the 1677-1678 eruption. Lava flows also reached the sea in 1585, 1646, 1712, 1949, and 1971.

On the image below, you can see the location of Cumbre Vieja volcano on the southern part of the island. It is currently under red alert for active eruption. Several thousand people live in the volcano’s vicinity. The total population of La Palma is around 85.000.

Below is a video from a webcam stream last night, showing the increasing activity from the fissures on Cumbre Vieja. Webcam stream is from the local TV Canarias.

Intense earthquake activity was also accompanied by ground deformation. This was a clear sign that the seismic crisis was caused by the movement and accumulation of magma under the volcano. The image below shows ground deformation, with a clear sign of uplift in the southern region, under the Cumbre Vieja volcano. Data indicated that ground has lifted over 19cm (7,5in) since the start of the seismic crisis. 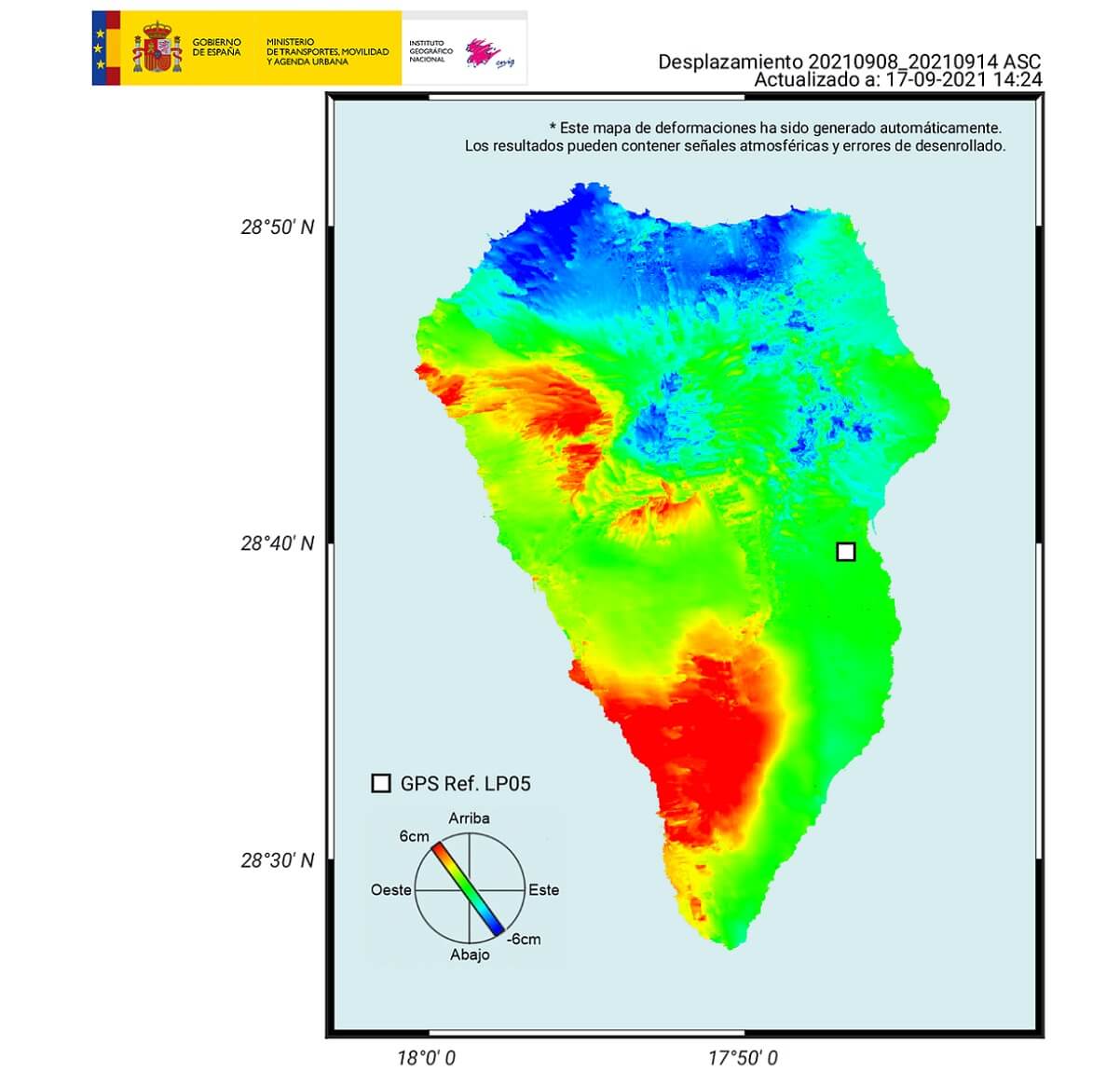 The image below shows the latest earthquake activity, including the last pre-eruptive earthquakes. A moderate M4 earthquake has hit the western slope of the volcano, which was the final crack in the ground. Eruption began, following this earthquake.

Looking at tremor data, we can see a sharp increase in amplitude, as the vents were starting to open on the mountain. The force of the eruption and the motion of fluids creates this harmonic tremor signal, which is continuous long-period shaking. This is a clear sign of an ongoing or an impending volcanic eruption, when in high amplitudes.

The Cumbre Vieja volcano erupted in the afternoon at 3.15pm. At least two eruptive fissures opened in the area of the Montaña Rajada mountains, located in the municipality of El Paso, and started to erupt visually spectacular lava fountains from at least 7 individual vents.

At the beginning of the eruption, the opening of the eruptive vents was accompanied by explosions that produced plumes of ash. The area of the initial eruption is an unpopulated forested mountain zone, and some forest fires were started but were later controlled.

The image below shows the initial phases of the eruption yesterday. The photo was captured from a live webcam stream by TV Canarias. Smoke and ash plumes are visible, as lava began erupting.

There were no initial reports of damages. Prior to the eruption, around 50 people with reduced mobility have been evacuated from nearby areas, with more evacuations following. The activity from the vent intensified towards the night, with lava already flowing down the mountain. Below is a live stream capture from yesterday evening.

This marks the first volcanic eruption on the island since 1971. The volcano was relatively quiet up to 2017 when occasional earthquake swarms started to appear. It was the first sign of magma slowly accumulating in its deeper reservoirs.

Activity from the vents really picked up overnight. On the image below you can see an active vent with a lava flow moving down the mountain. An exclusion zone of a 2 km radius around the eruption site has been emplaced, in order to protect people from gasses and projectiles.

The lava flows crossed the Tacande highway at around 5.30 pm, making the passage of vehicles pretty much impossible. La Palma airport has also been closed during the first hours after the eruption, as ash plumes presented a threat for aviation and of course visibility. The airport resumed its operations as the ash emissions decreased.

The Civil Guard on La Palma has announced that around 5.000 to 10.000 people in total will be evacuated from the municipalities of El Paso, Los Llanos de Aridane, Fuencaliente, and Tazacorte, as lava flows have begun to descend down the slope. The image below shows the projections and movement of lava flows from the eruption site. Graphic is by Miguel A. Noriega.

The spectacular scenery was ongoing into the night and the morning of September 20th. Lava flows continued to advance, at an average speed of 700 meters (2.300ft) per hour, towards the west coast. The flows have destroyed around a hundred homes in the municipality of El Paso, by the first estimate of the Civil Protection.

There has been severe damage to property but thankfully not to people, as the advance of the lava is slow enough to allow a controlled evacuation and escape if necessary. Lava jets were estimated to reach well over 100 meters in height.

The latest images show the lava flow continuing to move towards the nearby villages. As you can see, the lava flow is not bright red anymore as it is starting to cool, forming a darker crust on its surface.

First measurements were taken today, with an estimated amount of sulfur dioxide (SO2) emissions in the plume to be around 6000-9000 tonnes/day provided by the AEMET.

According to MIROVA Detection System, a very high thermal anomaly (2828 MW) was detected in satellite images yesterday, but it decreased to 1509 MW today. Some ash emissions are still occurring, with Volcanic Ash Advisory Center (VAAC) Toulouse warned about a volcanic ash plume that rose up to an estimated 2400 m (8.000ft) altitude.

TSUNAMI FOR THE UNITED STATES?

There was a lot of talk about a potential “mega-tsunami” resulting from this eruption. The theory is that the collapsing west flank of the volcano would send a lot of material into the ocean. That would create a tsunami large enough to reach the British islands and the east coast of the United States and Canada.

A study was made in the early 2000s, that simulated a scenario of a west flank collapse in La Palma volcanic eruption. The authors believed that a “catastrophic failure of the west flank” would drop between 150 and 500 km³ of rock into the sea.

That could result in tsunami waves that could transit the entire Atlantic ocean. The authors said that these waves could arrive at the Eastern Coast of the United States, with a height of between around 10 and 25 meters (33 and 82 feet).

The image below shows a simulation of the advancing tsunami in case of a collapse of the west flank of the volcano. But the officials have dismissed the chance of a “mega-tsunami” occurring and reaching the eastern coast of the United States. Newer studies have presented new data and simulations, almost entirely dismissing a potential mega-tsunami resulting from an eruption at La Palma. 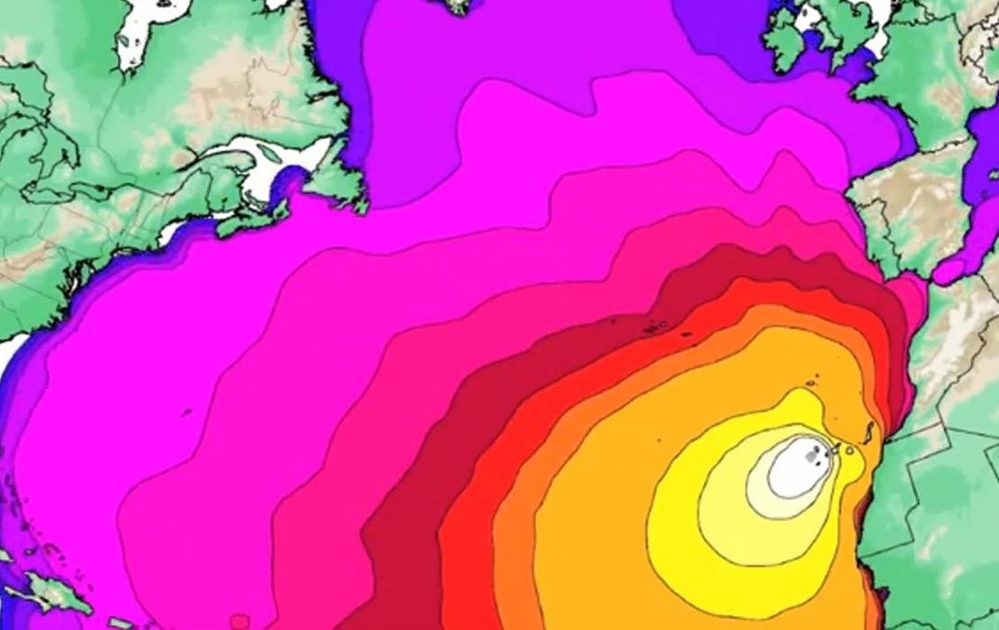 We will keep you updated on any unusual future activity, so make sure to bookmark our page. Also, if you have seen this article in the Google App (Discover) feed, click the like button (♥) there to see more of our forecasts and our latest articles on weather and nature in general.

Fall 2021 Forecast: La Nina will grip the weather in North America, while Europe Autumn will show its influence later in the season