Early September started with a strong Arctic cold blast into Scandinavia and the Baltic region. The same region including eastern Europe is now facing another intrusion of the very cold air mass. A powerful cold outbreak will intensify in the coming days, while gradually spreading towards the Balkan peninsula, the Black Sea region, and Turkey.

After a number of intense and deadly heatwaves this past meteorological summer, many countries were under the gun of extreme, locally historic heat that were replaced by a quick change into much colder period from the end of August into early September. It was a significant change from extremely hot days to mid-autumn temperatures in just few days.

We are now heading into the final 10 days of September 2021, temperatures are generally lower with less Sun heating and occasional intrusions of colder air mass from the north. Just this week, a pretty powerful cold outbreak is forecast to impact eastern and southeastern Europe, with a much colder air mass than normal. 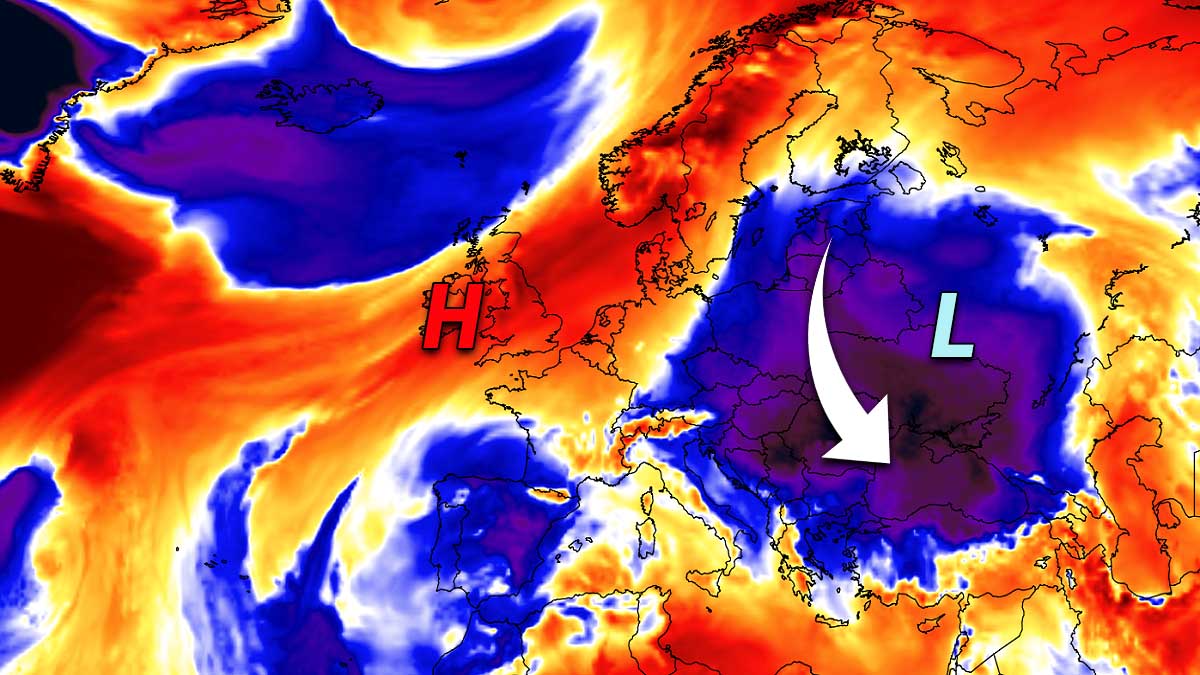 The water vapor satellite image this Monday has revealed a classic pattern that is normally resulting in a cold intrusion into continental Europe. A large upper-level low is placed over far eastern Europe and western Russia, with blocking High over western Europe. In between the two, meridional northerly flow is establishing from Scandinavia across Poland towards Ukraine. 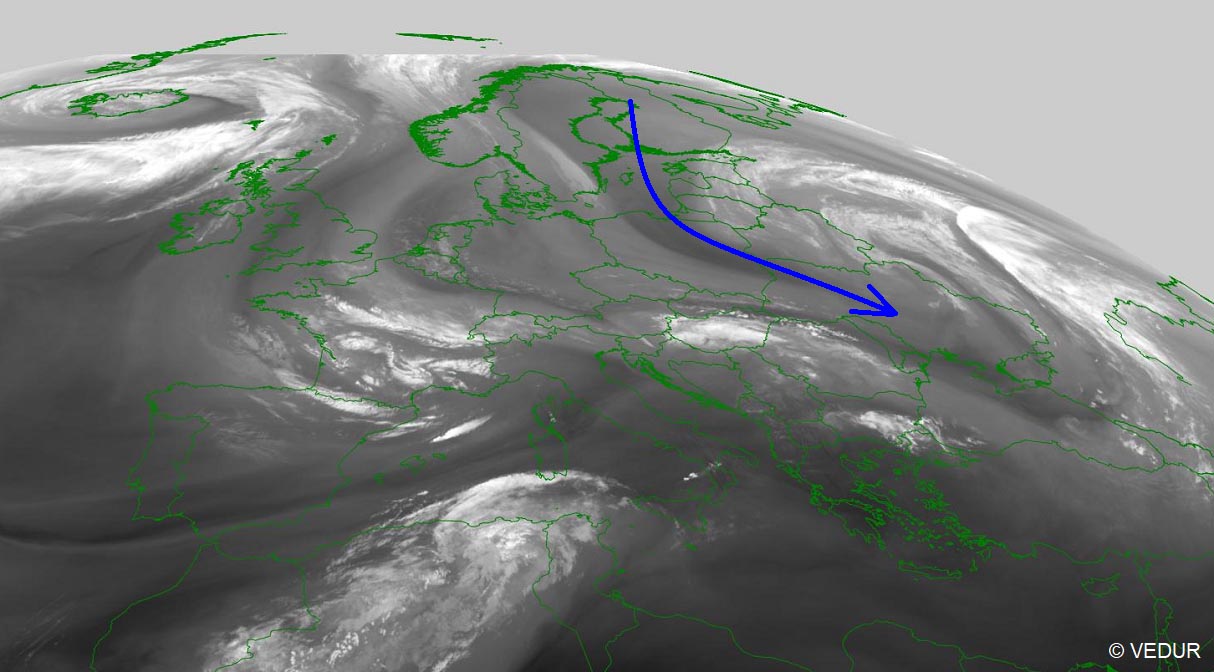 Notice also a pretty deep and well-defined cyclonic feature over far North Atlantic, that is a deep extratropical storm moving across Iceland today.

Most of the countries from the Baltic region to the eastern part of central Europe, the whole Balkan peninsula, eastern Europe, as well as the Black Sea region and Turkey will experience well-below normal temperatures for this late September period. The attached video below hints at the significant cold outbreak advancing towards the south.

Temperatures will be pretty *much* lower than normal for late September in these areas, especially across Ukraine, Moldova, Romania, and Turkey in the coming days. Very likely close to 15 °C below the average, also rising the potential for some frosty mornings in the most exposed lowland areas. Chilly daytime temperatures are expected as northerlies will also come with the cold behind the strong front.

BLOCKING ON THE WEST, DEEP LOW OVER EASTERN EUROPE

The general weather pattern over the European continent and North Atlantic early this week reveals a strong blocking high, centered over western Europe. To its east, a large and deep upper low is established, with its core deepening while gradually moving south.

On Tuesday, the position of both large-scale features results in a strong advection of meridional northerly flow from Scandinavia into Eastern Europe, meaning the cold advection will intensify. 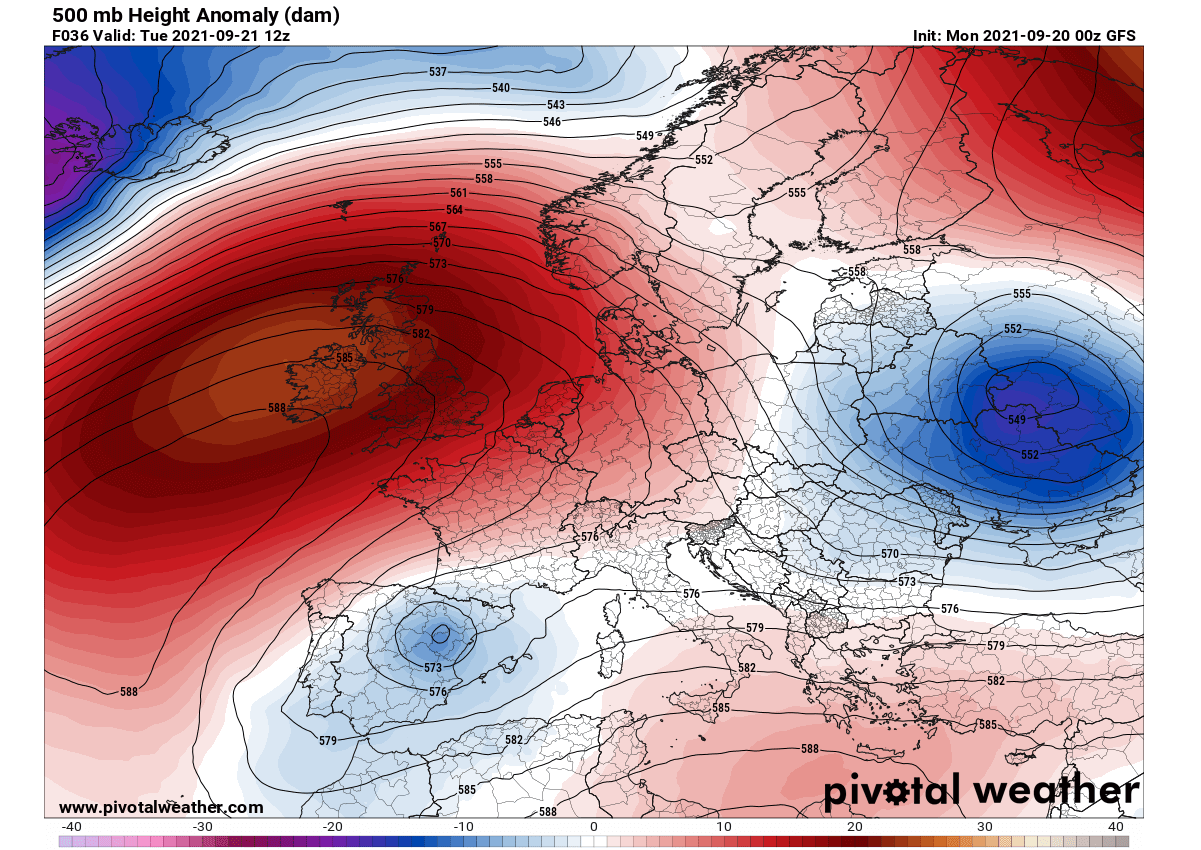 With the deepening upper low, the cold outbreak develops and spreads further south towards the Balkan peninsula and the Black Sea region.

The temperatures will be significantly lower than normal, about 12-15 °C below normal across eastern Poland, Belarus, Ukraine, and Moldova on Tuesday. Thanks to a strong surface frontal system associated with this low, the cold air mass intrusion will continue further south-southeast behind the main cold front.

While warmth will remain under the west European ridge, a much colder air mass will accumulate over the eastern half of the continent and persist for days. A deep extratropical low will move across Iceland on Tuesday, also resulting in warmer air mass spread into Scandinavia.

But the weather pattern change that is forecast this week will bring a pretty significant refreshment also for the Balkan peninsula and especially around the Black Sea region. Temperatures on Wednesday will bring the cold across much of the peninsula, spreading towards Turkey through mid-week.

The large upper low will further deepen on Wedneday, releasing a significant cold pool spread across much of the eastern half of Europe. The 850 mbar temperature anomaly chart below reveals how large the cold pool is forecast, covering the whole Balkan peninsula, eastern Europe, and the Black Sea, as well as Baltic countries.

Such strength of the upper low and an associated cold advection normally lasts for days, so the significant cold outbreak is forecast to continue farther south until Friday. The low will deepen a lot and become elongated on Thursday, centered over southeastern Europe.

While the strong upper-level ridge over western Europe will gradually vanish through mid-week, moving west with its core. To its north, deep secondary low in the wake of a large depression over the Arctic region develops towards Scotland. 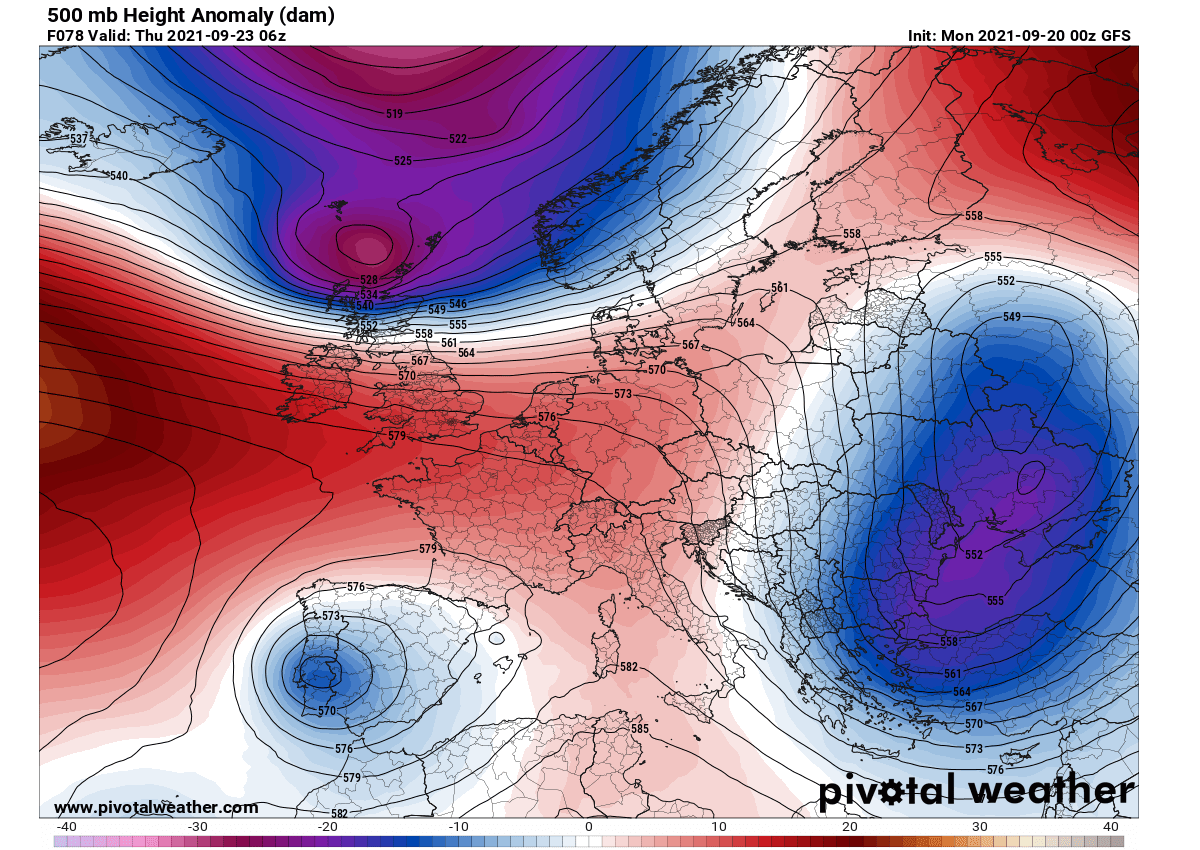 On Thursday, the large cold pool reaches Turkey with temperatures much lower compared to the early days this week. Daytime temperature will be 12-15 °C lower than normal for this period in September, and even more than 20 °C lower than on Monday and Tuesday.

The Balkan peninsula will not be spared from the cold either, at least across the eastern parts. The chart on the left is the 850 mbar anomaly (approximately 1500 m ASL), 2m anomaly is seen on the right. Pretty wild temperature anomaly over Turkey!

How powerful the cold outbreak will be is best visible on the anomaly charts. Here is the GFS Meteogram chart for the city of Istanbul, Turkey over the next 14 days. While the 850 mbar temperature on Tuesday will be around 18 °C (about 6 degrees CC above normal), the cooldown that follows will be huge.

The temperature on this level will drop significantly on Wednesday and peak on Thursday into Friday, going down almost 10 degrees Celsius below normal. So the temperature change will be nearly 15 °C in about a 36-48 hours period. 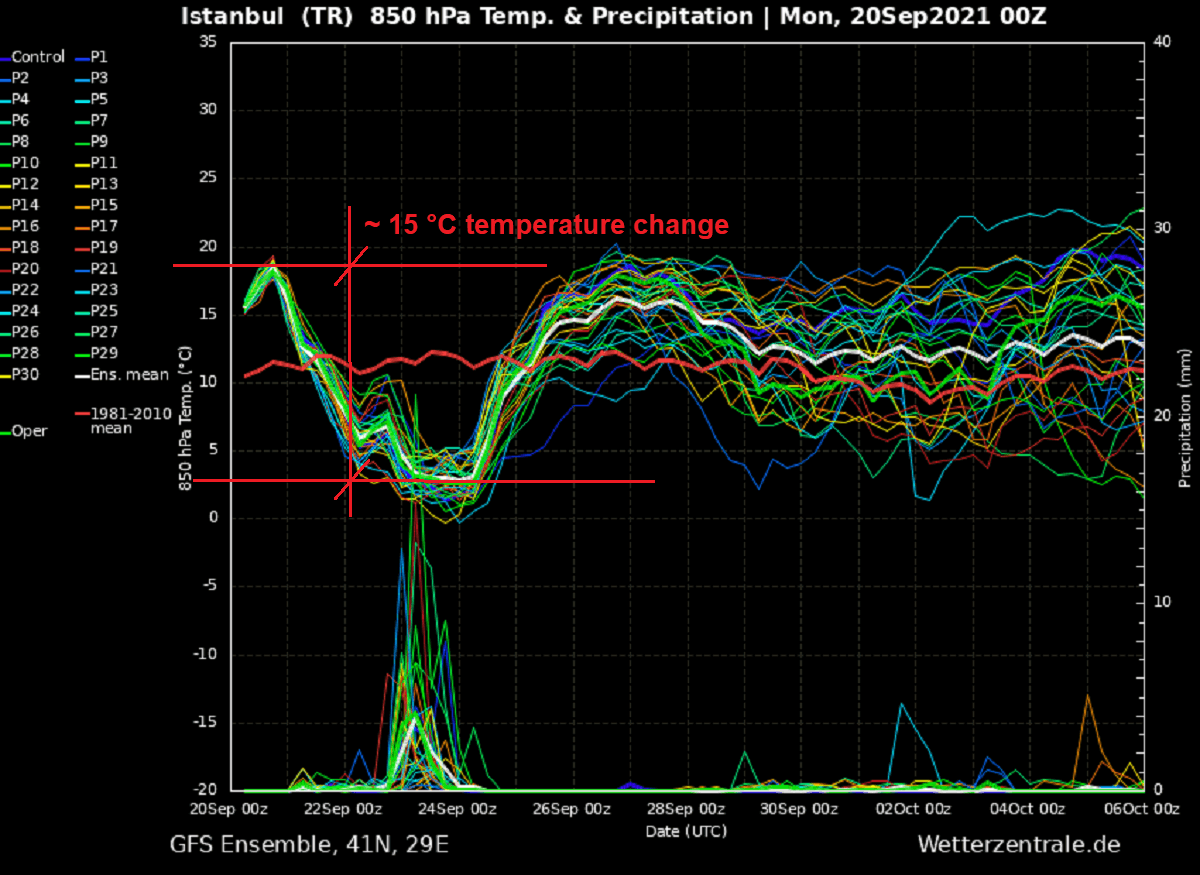 Attached below is an interesting chart with the comparison of afternoon temperatures across Turkey between Wednesday and Friday. Quite a difference as daytime temperatures will be even more than 20 °C lower in a matter of two days.

The strongest temperature difference will be pronounced particularly across the central and eastern parts of Turkey.

WEATHER PATTERN FLIP OVER THE WEEKEND, RETURNS THE WARMTH INTO EASTERN EUROPE

Late this week, the general weather pattern across Europe will proceed into some changes. The large and deep upper low across eastern and southeastern Europe will finally weaken, diminishing the intense cold outbreak over the Black Sea region.

With a persistent deep trough over the North Atlantic and northern Europe, ridging from the west-southwest Europe will gradually expand into central Europe and further east. This will allow higher geopotential falls to develop also over the Balkan peninsula, as well as eastern Europe and the Black Sea region.

The result will be much stable weather and especially higher temperatures. As we could see from the Istanbul Meteogram chart above, warmth will be quite significant and temperatures are forecast to climb a few degrees above normal again.

Overall, the southwesterly flow will allow warmth to spread across southern, and eastern Europe, including Scandinavia and the Baltic region. Temperatures should again return into the mid-20s for many countries over the weekend and extend into the final week of September 2021.

***Images used in this article were provided by Windy and Wetterzentrale.

We will keep you updated on future weather development and pattern changes, so make sure to bookmark our page. And also, if you have seen this article in the Google App (Discover) feed, click the like button (♥) there to see more of our forecasts and our latest articles on weather and nature in general.