Meteor showers are great fun! The Orionid meteor shower peak is here. Here are some tips on how to see it best!

Orionids are bits and pieces of the well-know comet Halley. As the comet rounds the Sun every 76 years, it releases a stream of small dust particles in its path. The Earth ploughs through the stream every year around October 20-23. The Earth and particles collide at 67 km/s and the particles burn up high in the atmosphere, producing bright streaks of light – meteors. The dust particles (called meteoroids) travel on parallel paths, but due to the same geometric effect that makes it look like two railway tracks merge in the distance, all Orionids will seem to come from a single point in the sky. This point (the radiant) is in the constellation Orion, hence the name Orionids. 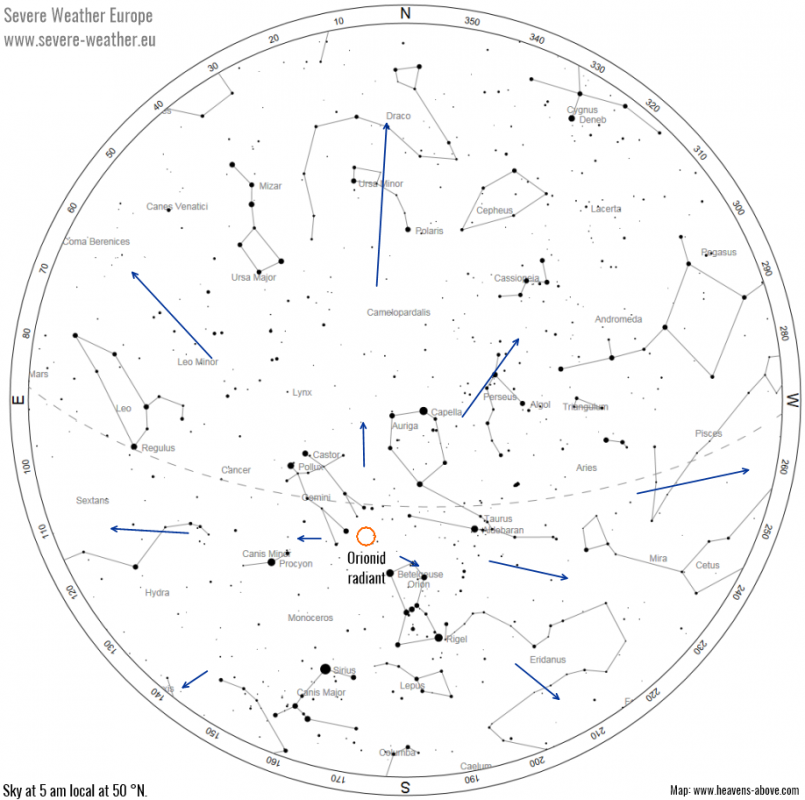 That is a meteor shower in a nutshell. The Orionids are a reliable annual meteor shower. At their peak, you will be treated to about 15 to 20 meteors per hour, if you watch from a dark spot. Urban light pollution will greatly diminish the number ob meteors, so get far away from urban lights. As it is weekend, you can try a higher mountain location. There is another catch with the Orionids: the constellation Orion does not rise until midnight, so there will be no Orionids in the sky in the evening! The best hours to watch are the final hours before dawn.

This year there is a bright Moon in the sky for most of the night. Fortunately, the Moon sets just in time for ‘prime time’ for the Orionids – the final pre-dawn hours. On Monday morning the Moon sets around 4:30 local time, leaving a good hour and a half for observing the meteor shower. The window shrinks on Tuesday morning (October 23) to about half an hour before dawn. You can begin before the Moon sets: about half to one hour earlier. It will be interesting to see how the sky becomes darker as the Moon sinks lower in the sky and sets. Do not be discouraged if you do not see many meteors while the Moon is still up – they will appear when the sky becomes darker.

The Orionids are generally relatively faint meteors, but bright shower members do appear. Many produce persistent trains, lasting a second or two. If you are lucky, you will see a bright fireball. Like this brilliant fireball, brighter than the Full Moon, captured over Poland during the 2012 Orionids.

But there is more! In the final week of October and first half of November you may also see the Taurids. These meteors radiate from the nearby constellation Taurus, but they are much slower. The shower is not as strong as the Orionids, you can expect about 5, up to maybe 10 Taurids per hour. But the shower is well known for numerous bright meteors and fireballs, known also as ‘Halloween fireballs’ so it is well worth observing. There are also random, or sporadic meteors. Under a dark sky you may see 10 or more per hour.

Good luck with your observations of the Orionid meteor shower! Let us know your impressions – find us on Facebook

Here is how to photograph meteors! Try it on the Orionids – it is fun!