A very dynamic pattern continues over the North Atlantic, which means that a rather stable, milder, and no winter weather is forecast for the European continent. What we can see from the model guidance is the trend for extreme warmth developing across parts of Europe. But then, the pattern could finally flip, and cold weather is forecast to spread into parts of Europe sometime around Christmas.

We have seen some very deep North Atlantic lows so far from the late autumn into early winter this year. Even yesterday, a very deep low of 938 mbar central pressure has developed. This typically means that upper-level ridge develops to its east, so over the European continent.

As such, it favors more stable weather and therefore also milder conditions across most of Europe. You can surely see how the weather has been unusually warm in your part of Europe for most of the time this winter so far.

Well, the pattern ain’t going to change anytime soon, as a major, regionally extreme warmth is expected to spread across a large part of Europe. Especially over northern, central, and eastern Europe over the next week or so.

However… there are trends of a more significant pattern change/flip later next week, so just around Christmas, according to the latest model trends. Those are hinting a large blocking high developing over the North Atlantic which normally stops the zonal western flow towards Europe, so we are receiving the air masses coming from the north.

And that means cold or even snow, indeed.

Now let’s see how the pattern evolution will unfold day by day over the next week to 10-day period, so from today until Christmas.

Today, the general pattern established over the North Atlantic and Europe reveals a deep low moving towards western Europe from the west, generating massive waves and swell that will arrive on Friday. While over Europe, the upper-level ridging is resulting in stable weather. 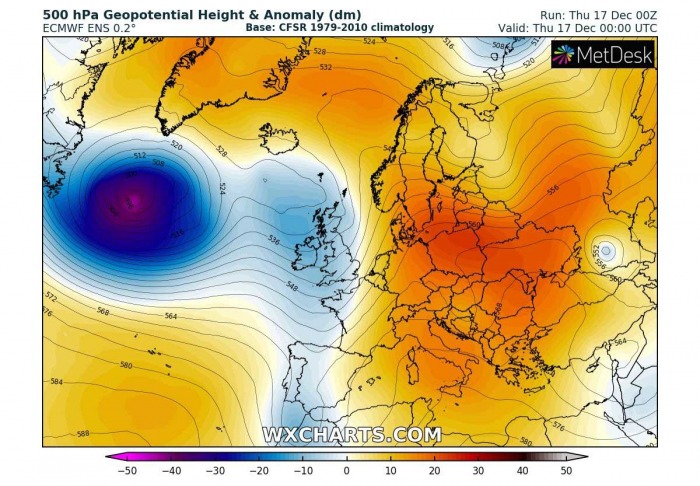 The deep North Atlantic low is best visible on the sea level pressure charts, its central pressure is around 960 mbar, gradually rising as the depression matured on Wednesday.

We can see a large surface high-pressure system is spread over the European continent. One core over northern and another over southern Europe. In between, a southwesterly jet stream with strong winds is present.

This means nothing else than a warm advection into our continent. So the general picture over Europe on Thursday is above-normal temperatures for many, especially over central and eastern Europe. Actually, the only minor spots see temperatures near normal or slightly below – e.g. western Iberia and northern Scandinavia. 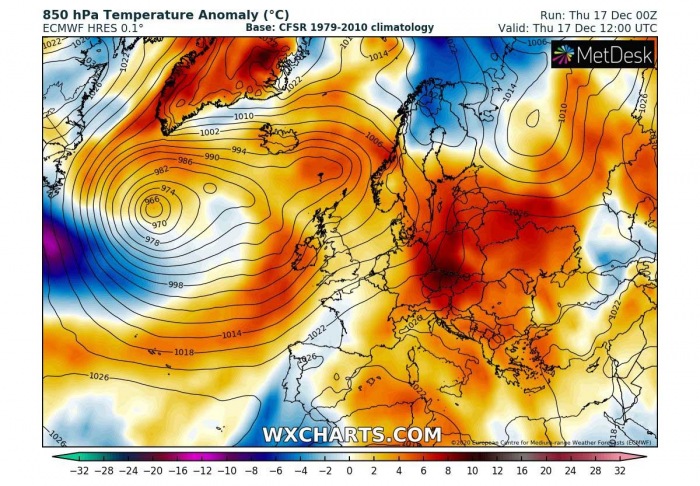 Warm advection is also spread across the North Atlantic, ahead of the deep depression coming from the west.

On Friday, the dominant feature will be the deep North Atlantic extratropical low, now coming closer to the UK and Ireland. Blocking high and stable weather will persist over the European continent. 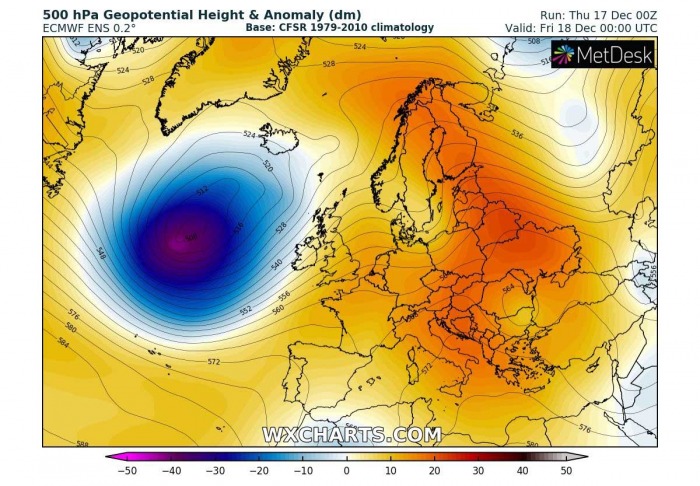 Although the extratropical low is in its weakening phase, it remains a very large system and dominates the whole North Atlantic. A strong high-pressure system over Europe covers most of the continent, even strengthening towards central Europe from the eastern Europe and the Balkans.

High pressure also strengthens over northwestern Russia and this is an important feature that will bring a significant change for our continent this weekend. 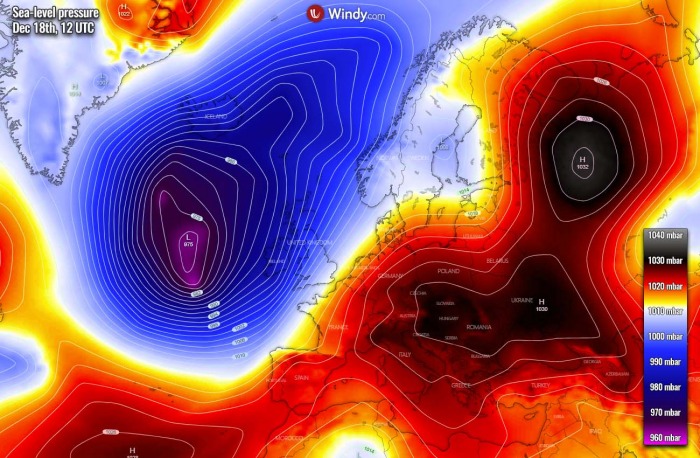 Also, temperature-wise, the deep North Atlantic depression will develop a strong warm advection into western Europe, as well towards Scandinavia on Friday. The building upper ridge and a high-pressure system over northwestern Russia bring some cold weather into the region.

Elsewhere, mild December day and no winter weather is forecast. 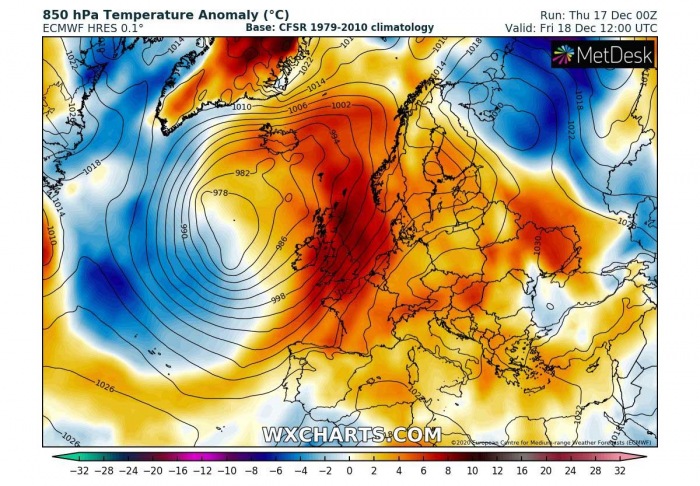 In the wake of the extratropical low, cold advection spreads from the Labrador Sea into the northwestern Atlantic.

As the weekend starts, the deep low over the North Atlantic drifts a bit more into western Europe, providing another day of unsettled weather over UK and Ireland. The upper-level ridge pattern over the European continent strengthens. 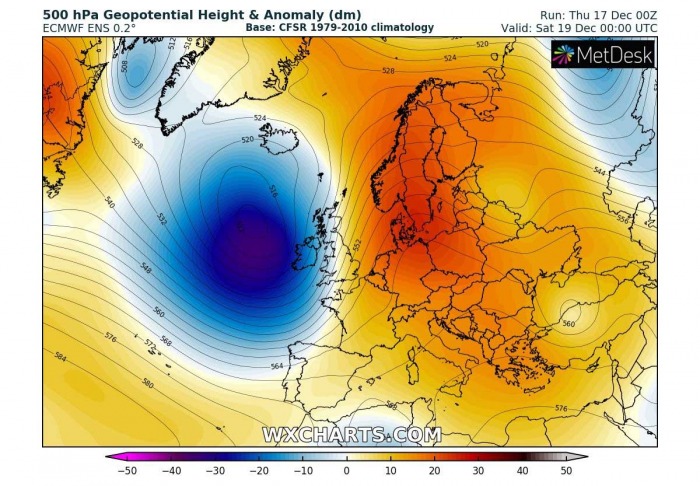 While just looking over the pressure forecast on Saturday, one can feel the air mass flow. Indeed, from south-southwest towards the north. The North Atlantic depression will still dominate most of the region, while high-pressure systems will be fully developed over most of the European continent and western Russia. 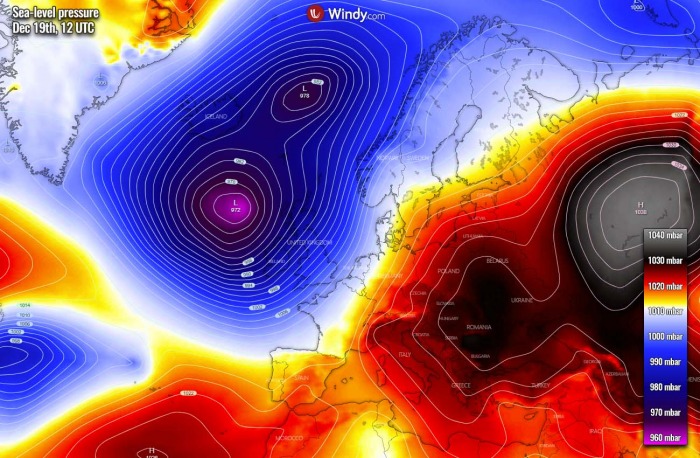 Strong south-southwesterly winds in between result in a significant warm advection over Europe, delivering particularly warm air mass over the northern half of the continent.

The 850 mbar (approximately 1500 m above sea level) temperature anomaly will be more than 12 °C above normal over Scandinavia. This could result in daytime temperatures close to 10 °C or even higher in some parts, especially where downslope dry Foehn winds will develop. 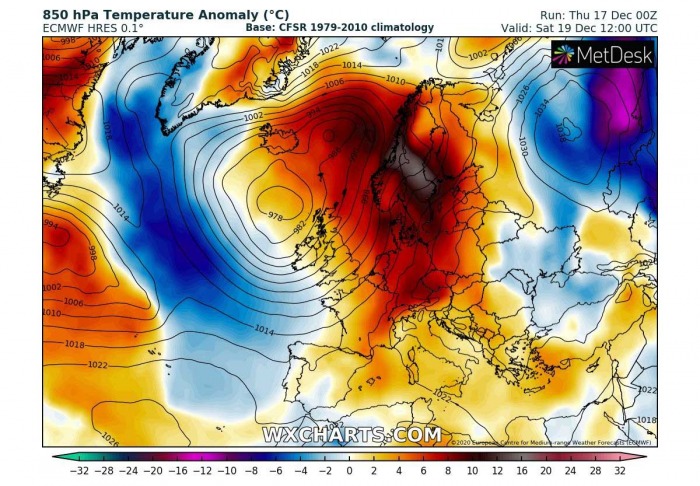 The cold advection in the wake of the Atlantic depression continues, becoming even stronger on Saturday.

Through Sunday, the upper-level ridging over Europe strengthens, even more, becoming strongly above the normal mid-December values over northern Europe. While the North Atlantic low finally weakens considerably. 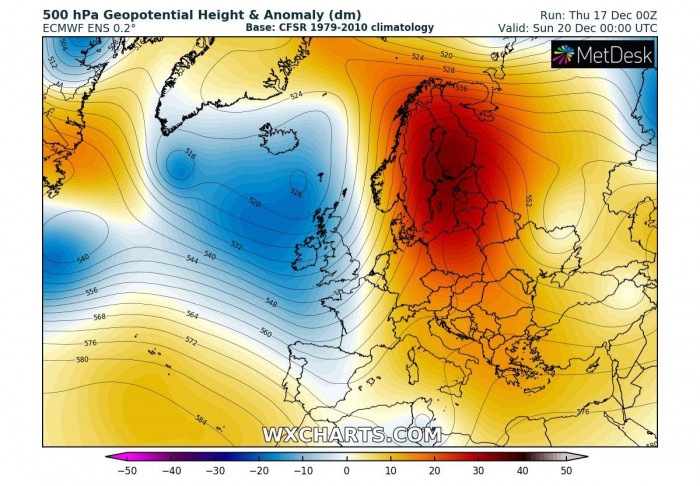 As the Atlantic trough/low is weakening, the associated surface depression is moving further northeast towards the Arctic region. So the southerly winds strengthen over Scandinavia, against the extensive high-pressure system over eastern Europe and western Russia.

Another surface low also develops over the North Atlantic, in response to the advection of colder air mass in the wake of the big depression. 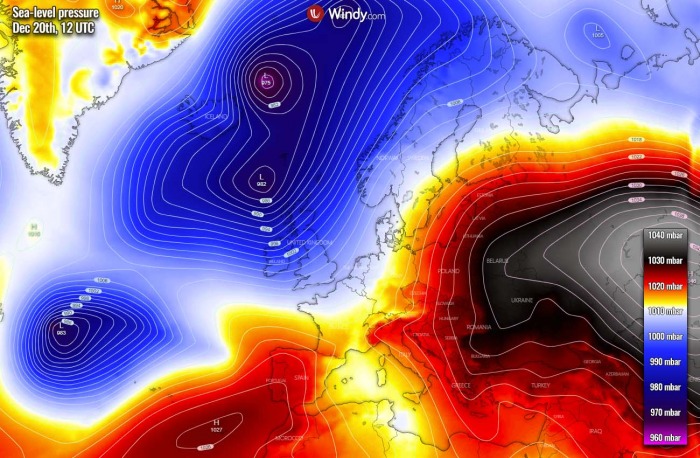 We can see that the weekend days will be extremely warm over the northern half of Europe, thanks to the stronger southerly winds and warm air mass advection to the east of the decaying Atlantic low. It will also be very warm over central Europe on Sunday.

Under the Russian blocking high, cold advection continues towards the Black Sea region. 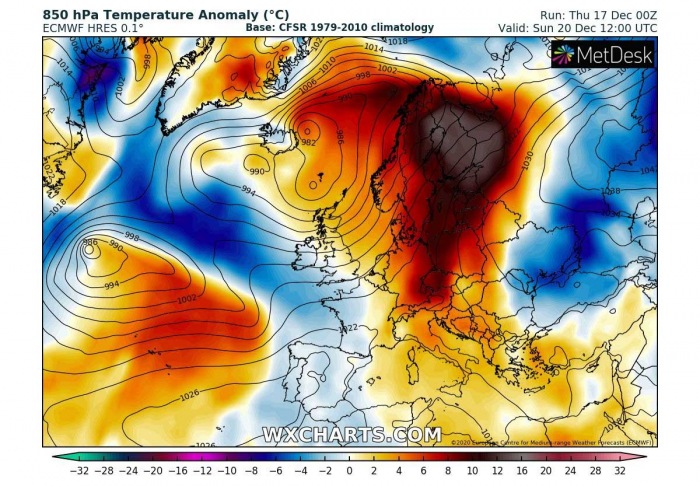 The cold advection in the wake of the decaying depression over the Atlantic would normally bring colder weather at least towards southwestern Europe. But the new low cuts it off and pushes warmer air mass over the Azores, gradually spreading towards Iberia as well on Sunday.

And then comes a new week, does it finally make some changes? Not yet. It looks like the pattern wants to repeat itself, as strong ridging continues over the European continent while a dynamic pattern remains over the North Atlantic. The Azores high also strengthens ahead of the new Atlantic low.

But the trends are hitting something soon… (hint: see the Northwest Atlantic) 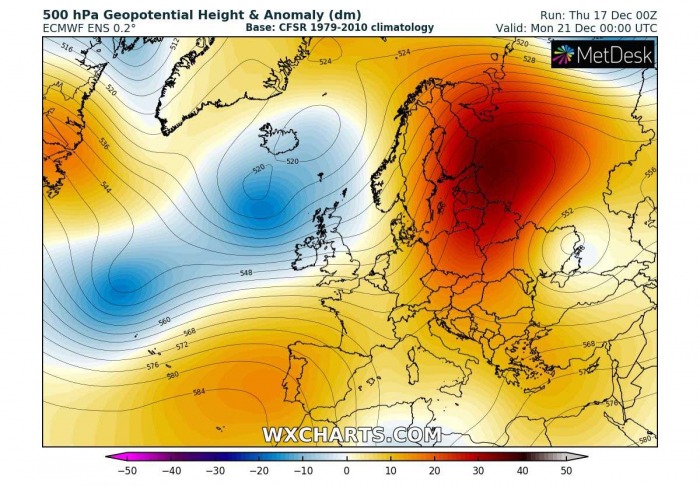 The general surface pressure forecast on Monday hints very similar picture as it will be over the weekend. Therefore, again lower pressure over the Atlantic and western Europe with high-pressure covering most of Europe. Favoring a persistent southwestern flow into our continent also into early days next week. 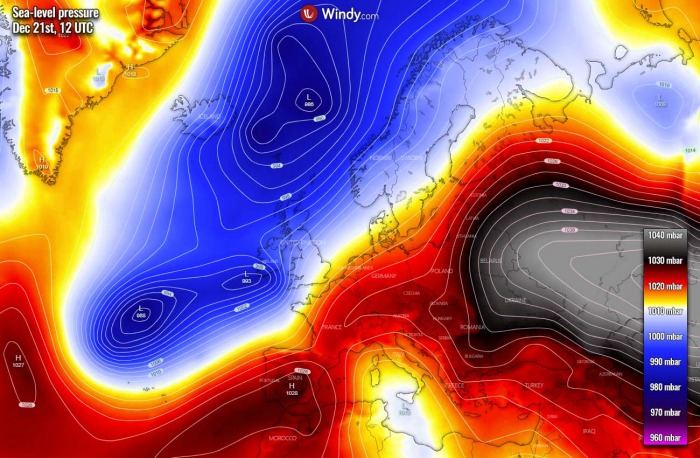 Indeed this means no difference in the temperatures, however, very warm day again over Scandinavia and also higher temperatures into west-southwest Europe.

The only part with colder temperatures would be Ukraine and the Black Sea region, thanks to the cold advection under the high-pressure system from Russia. 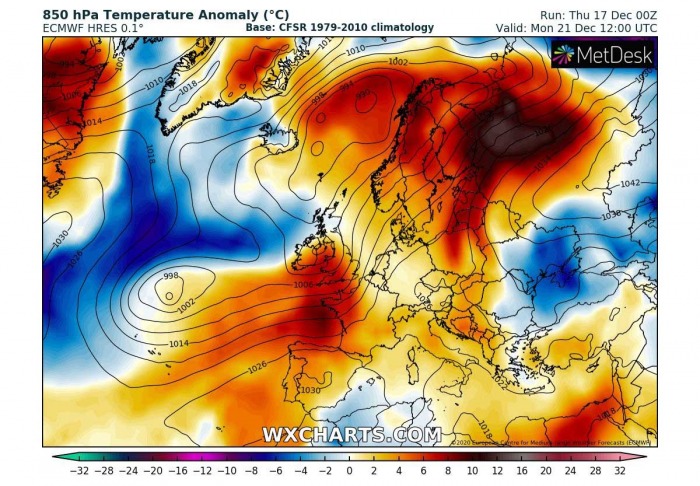 But then, take a look over the Atlantic. There is a hint of a building high-pressure over the Northwest Atlantic, with a lot of colder air mass developing to its east. From Greenland towards the low further south.

This is the general trend we are now seeing for the final weather change coming towards Christmas this year. Let’s take a look what happens next.

Through mid next week, Wednesday, a North Atlantic finally sees some changes. The upper-level ridge strengthens from the Northwest Atlantic towards Greenland. This is a sign that something is brewing in the trends. 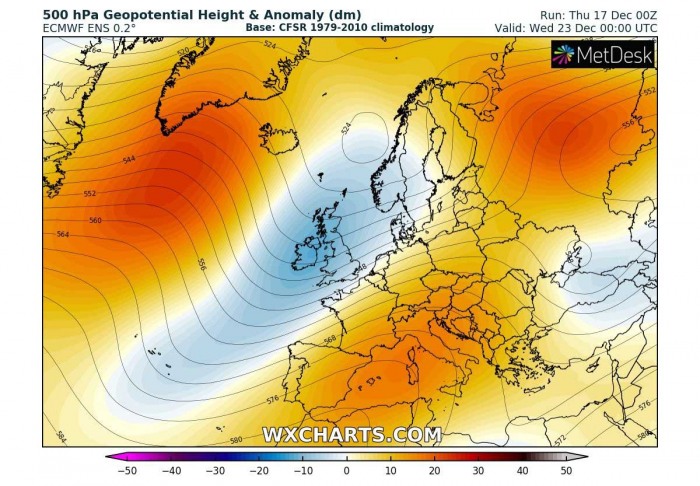 This change is now greatly visible on the pressure forecast. See what we are talking about?

A strong high-pressure develops over the North Atlantic, shuts down the westerly, zonal flow. So the flow turns into a more meridional directions on its eastern side. This comes together with the remnants of the large depression which expands into northern Europe. 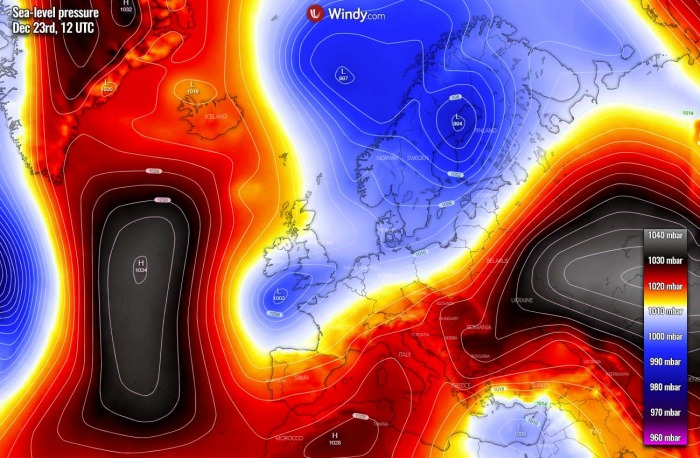 Indeed. This pattern setup develops a strong cold advection channel from the Arctic region into the North Atlantic, so the cold air mass spreads deep south towards the Azores and gradually also expand east towards western Europe as well on Wednesday. 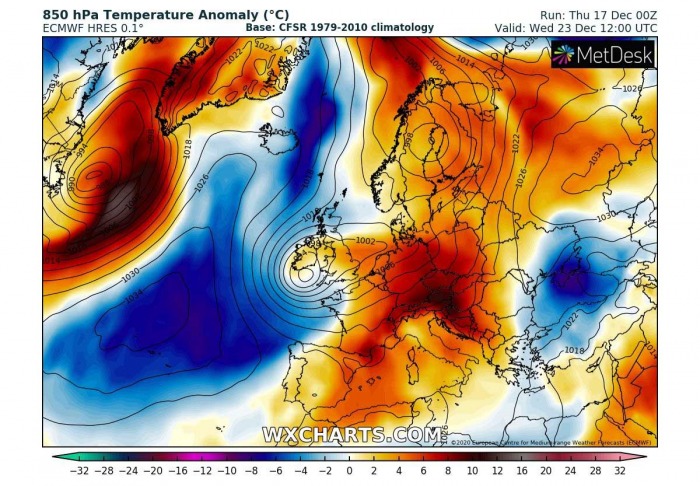 It still remains very warm over Europe, thanks to persistent southerly flow remaining over our continent.

The pattern continues trending into colder weather for Christmas, Friday next week. While the upper-level ridge over the North Atlantic strengthens further, the additional flow from the north responds in deepening of the wave to its east. Also further south, so the channel for a significant cold advection is established. 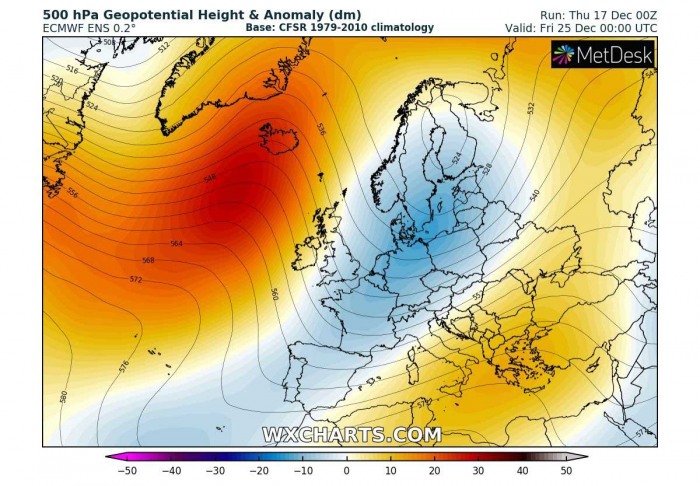 Now, this is a good example of what the would a winter enthusiast like to see during the winter months. An obvious blocking high over the Atlantic, giving no chance for warm Atlantic/zonal flow towards the European continent. And a large depression covering Europe, feeding from the north. 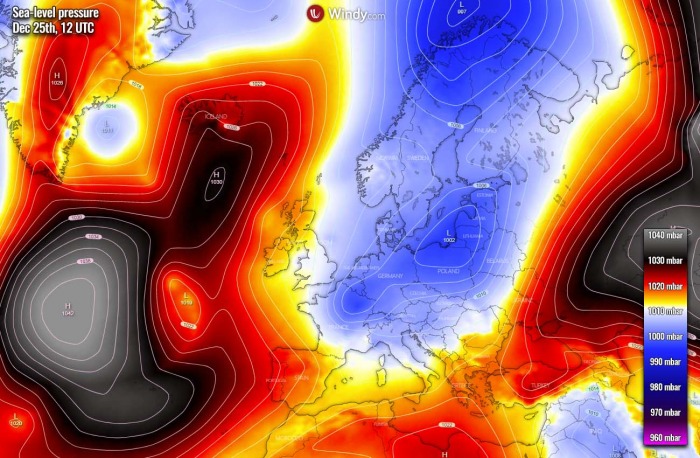 See what we are talking about?

The response to the blocking high-pressure system over the Atlantic and depression over continental Europe brings significantly colder weather into the western portions of Europe. The warm air mass should finally be washed away from this part of Europe, gradually also further east. 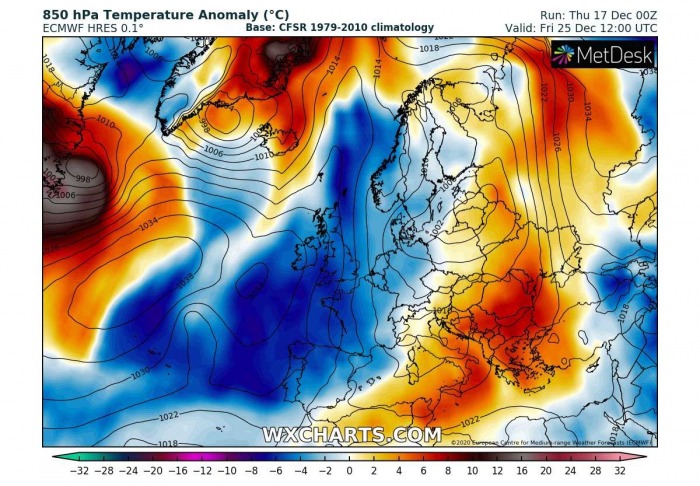 As we can see, the period around Christmas is forecast to finally bring the potential for a more winter weather pattern over the European continent.

And also the trends for the weekend next week are in general agreement of cold dynamic weather, but let’s wait a few more days regarding the more precise forecasts.

We could be finally entering a more winter period over the holidays.

As the overall pattern over the next 10 days will support mostly southwesterly winds, this means a lot of rain for the classic spots, for orographic precipitation exposed areas in Europe. Northwestern Spain, higher terrain of UK and Wales, western Alps, and southwestern Scandinavia.

These areas could see around 100-150 mm of rain until mid next week, even more than 200 mm over northwestern Iberia. In general, until Wednesday when the forthcoming pattern change stops the southwesterly flow and moisture advection. 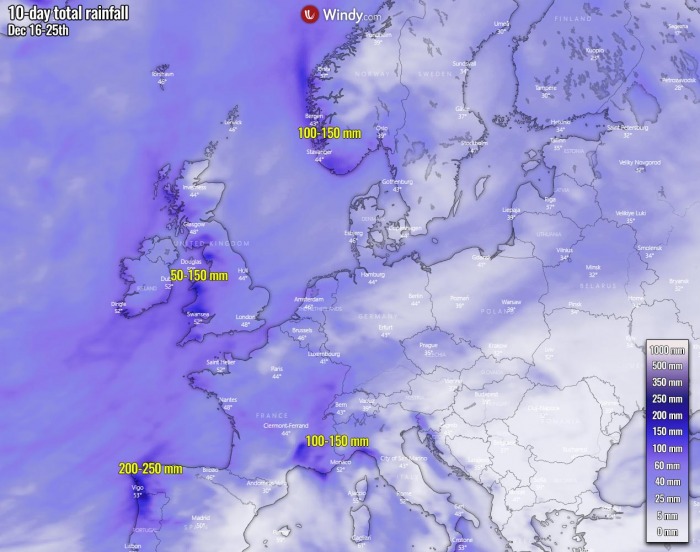 However, not a really extreme amount of rain is expected anywhere over the next 10 days. An exception could be northern Iceland where some models are trending towards a high precipitation amount over the next 7-10 days.

Indeed, many of us are now asking… could we see white Christmas this year? Here is the ensemble GFS model forecast (GEFS) for the Christmas day probabilities of falling snow. Actually, it does not look too bad, to be honest.

The trends in the pattern change do hint there is an increasing potential for snowfall in parts of central Europe and eastern Europe. Also over Scotland and northern Spain.

These chances are indeed strongly dependant on the pattern evolution. If deeper trough/low develops over our continent, higher chances for snow forecast exist. 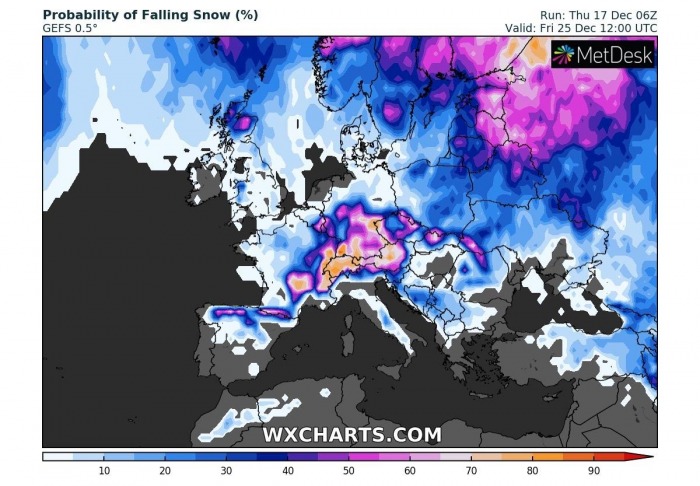 Below is the general 10-day snow accumulation chart of Europe, so from Dec 17th to 26th. We can see that models are trending into a classic deep snowpack for southwestern Norway due to the moisture advection into the region. A rather typical evolution there.

As we can see on the probability chart above, those higher chances could finally bring some snow accumulation in other parts of Europe as well. Those areas like the northern UK, central Europe with western Balkan peninsula, most of Scandinavia and far eastern Europe and western Russia. 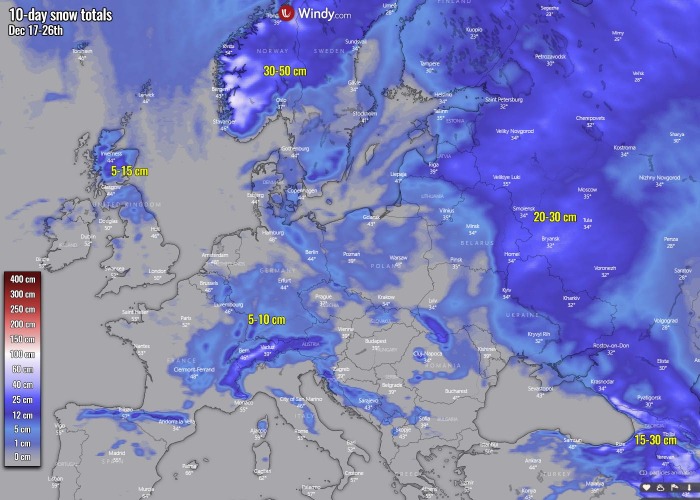 There could also be quite some snow along the eastern Black Sea region, across southwestern Russia, Georgia, and indeed eastern Turkey.

Bottom line, there are now increasing chances that at least some parts of Europe could experience snowfall around Christmas holidays.

Stay tuned for additional updates early next week as we also plan to do our traditional ‘White Christmas potential’ outlook over Europe.

We are closely monitoring the pattern evolution prior to the holidays and will keep you updated!